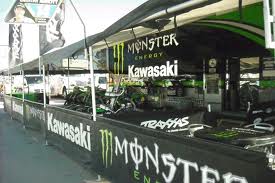 Kawasaki’s factory off-road racing effort will be disbanded at the end of the 2012 racing season. Funded primarily by Monster, rumor has it that the recent signing of Ryan Villopoto (to a reported 3-year 2.5 million dollars a year) sucked the racing budget dry. Taylor Robert fresh off his top garnering top American honor at this years ISDE will finish out the Endurocross season along with teammate Justin Soule. We have not received any official word from yet.
This is particularly bad news for the off-road racing world. Suzuki, a dominant force in GNCC racing for years yanked their off-road team two years ago so if you look at the cards left on the table, KTM is the Goliath hunting down championships in the GNCC, National Enduro and National Hare and Hound arena. On the GNCC side Yamaha’s AM Pro effort and Husky’s team are the remaining factories left in the battle along with a number of highly touted privateer efforts.
More to come.

But you won’t see this again. Taylor will finish out the Enduro X series for Kawa. What’ll happen next year?

Team Green’s off-road heritage goes way back (Ty Davis pictured at an ISDE qualifier) and will be missed.