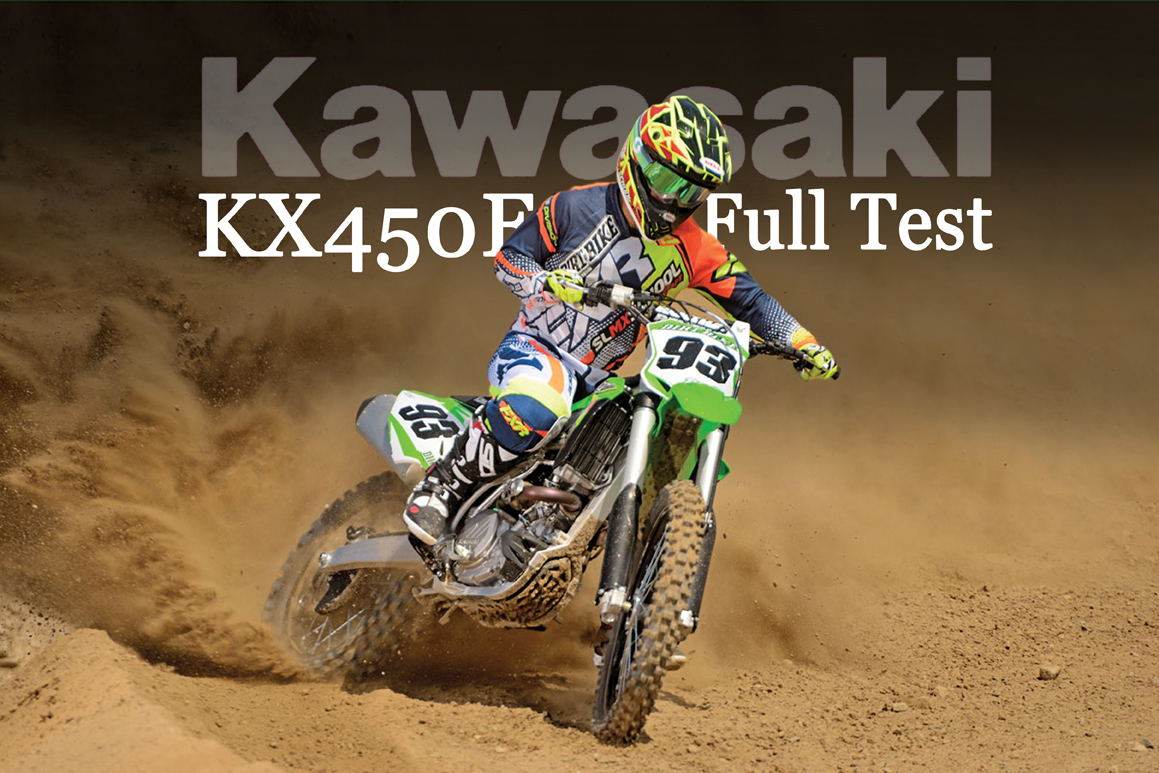 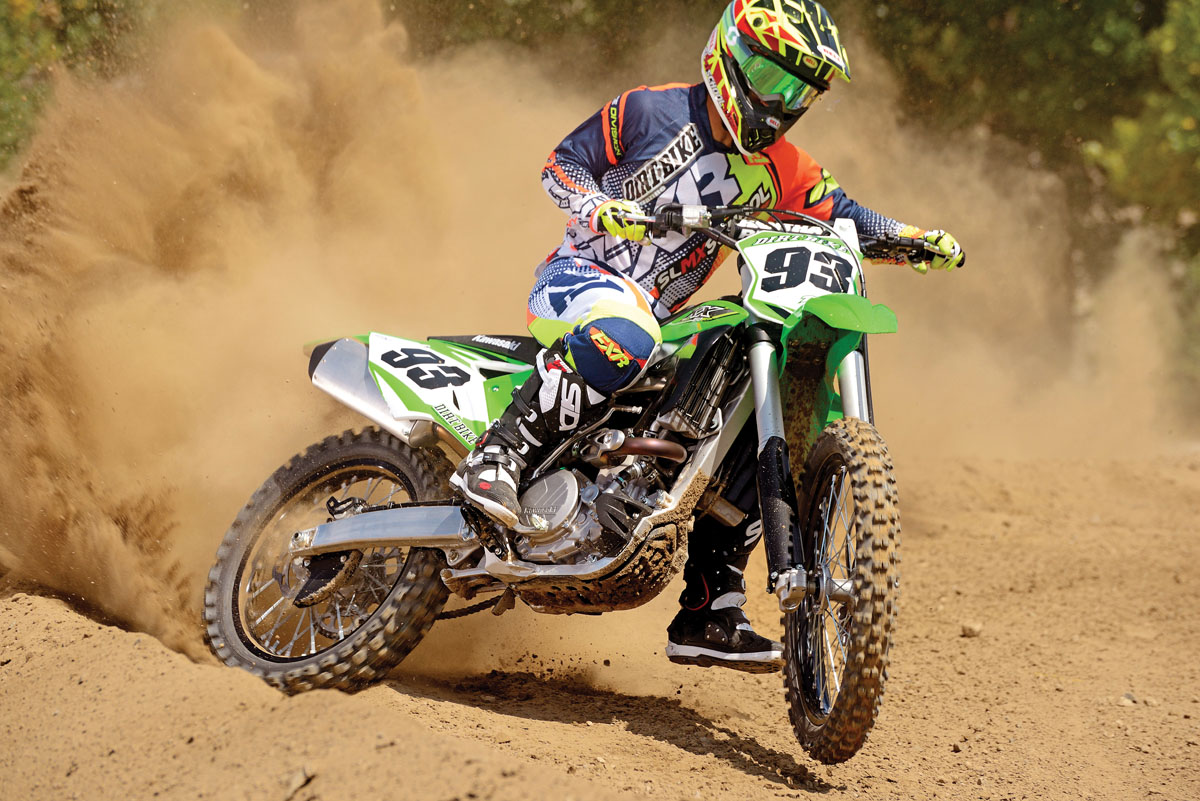 Last year Kawasaki redesigned its 450 from the ground up. That worried us at the time, because the KX had been our favorite big-bore motocross bike for a number of years. But, there was no doubt that it needed some attention. It had become the heaviest bike in the class, and there were several machines that were more powerful. Still, we loved the overall package, which had no real weak points.
So, the 2016 version came out with a 7-pound weight reduction and a chassis that was significantly narrower through the midsection. The bike had lost some of its snap. The fuel mapping was spotty, and the suspension wasn’t a hit with everyone. It still won the 2016 Dirt Bike magazine shootout, but the margin of victory was virtually zero.

Now, the 2017 Kawasaki is here with a very short list of changes. Kawasaki strategically targeted the new bike’s weak points. Both the fork and the shock got internal changes. The fork is the Showa Triple Air, which we’ve come to both love a little and hate a little. It can work brilliantly, but when it doesn’t, it seems you can chase the settings all over the track and end up right where you started. There are three air chambers in the right fork leg, while the left has all the damping functions. The main air chamber has an opposing “balance chamber,” and there’s a third low-pressure chamber for fine-tuning. The rear suspension has a Showa shock with a new spring (same rate, different material), new linkage and different valving. The swingarm has minor changes as well.

The motor has no changes as far as hard parts go, but the ECU has a different map. Last year’s bike had an annoying tendency to pop on decel. It didn’t cause any real trouble on the track, but it could and did drive some riders crazy. Kawasaki still gives you three different couplers with the bike that allow you to plug and play different power characteristics. The green coupler is standard, and the white is leaner and made for a more aggressive power delivery. The black one is richer and smoother. It’s a good system that makes for useful changes. It can be particularly helpful if you go from a sand track one week (white coupler) to a hardpack track (black coupler) the next. You can also go deeper into the ECU with Kawasaki’s optional handheld FI calibration kit. Even if you don’t have much in the way of electronic know-how, there are ways you can use a little orange light on the Kawasaki’s left handlebar to tell you what’s up with your bike; it will flash codes to tell you what’s wrong. It takes a little know-how to get the Kawasaki into its diagnostic mode, but it’s all spelled out in the manual. Right next to that light is the button that triggers Launch Control mode. We tested this until we got bored with it. It works, but most riders simply don’t trust it. The idea of taking a few horsepower off the top for a better start is a tough concept to swallow.
Another thing worth mentioning about the KX is its adjustable ergos. Tall guys can move the pegs down and the bars forward. Short guys can leave the pegs in the standard position and put the handlebar just about anywhere. There are four possibilities.

STILL A GOOD HAND
If you’re familiar with the KX450Fs of 2015 or earlier, you’ll notice two things immediately. First, you’ll think the bike has lost 20 pounds. The actual difference is more modest, and the bike is still a bit heavier than the KTM, Husky or 2016 Honda, but it makes you think it’s light. The second impression you get is about the power. The newer Kawasaki doesn’t feel quite as fast as the old one. It’s not true; in fact, the new bike has nearly identical peak power and slightly more bottom end than the 2015 model. The delivery is smoother, which is a good thing in almost anyone’s book.
One thing that has changed, however, is the playing field. Most competing manufacturers have found more power in their 450s. The new Kawasaki feels mild and mellow because it’s now near the bottom of the heap in horsepower output. Does that matter? To some riders it does; to some it doesn’t. Peak horsepower and race performance have no real correlation in non-professional motocross. When you get into the deep end of the horsepower pool with 450cc motocross bikes, the water is over just about everyone’s head—it doesn’t matter by how much.
For 2017 there isn’t much difference in how the Kawasaki’s motor performs, aside from the fact that the popping is mostly gone. If you chop the throttle at high speed, you might get some motor music, but it’s not annoying. As far as real performance, the KX is about the same. It has a somewhat mild power delivery. Way down low it’s strong and smooth. Above 6000 rpm it continues to get the job done, but it’s not in the same league as the Yamaha YZ450F, KTM 450SX-F or Husqvarna FC450. All three of those have pushed the boundaries of 450-class power higher over the last few years.

TRIPLE AIRTIME
If performance is the only goal, the Showa TAC fork scores as well as any front suspension system made. In stock form, 95 percent of the world’s dirt bike riding population will love this fork without a single adjustment, and it can be altered in about a zillion ways for the other 5 percent. The bottom line is that you can make it do virtually anything by adjusting the pressure in the three chambers, oil level in the two legs and clicker settings. There are so many possibilities that it’s easy to get lost. Our advice is to set the main chambers to the recommended pressures, and only alter them if you can’t get what you want through damping adjustments. Showa says you should set the chambers in this order: inner (152 psi), outer (16.7 psi), balance (174 psi). If your issue has to do with stiffness, the inner chamber will give you the best results. If it’s all about turning and ride height, more pressure in the balance chamber will bring the front down. The only way to really understand the various aspects of the Showa TAC is to experiment. And there’s the rub. You can spend a lifetime testing just to understand your options.
Interestingly enough, the biggest hesitation that riders have about air doesn’t seem to be a real concern. The chambers hold pressure well. At first we checked them every ride and found that the only air loss was caused by the act of checking the pressure. Temperature is also a factor; leakage isn’t. Total air loss is also rare. Ken Roczen’s Suzuki had this happen at the Glen Helen round of the Lucas Oil National MX series, but his fork was nothing like the one on the Kawasaki or even the stock Suzuki. For one thing, the works RCH team uses a KYB fork, and for another it was not a KYB part that failed but a sensor that the team installed.
With all this talk about the fork, it’s easy to lose sight of the fact that the Kawasaki’s rear suspension is excellent. This year both components of the linkage were altered, and the bottom line is that the bike has a much more stable feel. With the preload set to the same 105mm that we used and liked last year, the rear end felt lower in action. We liked the result, although one rider wanted to slide the fork legs higher in the clamps to more accurately duplicate the feel of the 2016 Kawasaki.

FINAL MOTO
Kawasaki did a great job last year with the new chassis. It’s still a great bike, and we still love it. Its biggest challenges in 2017 come from the perception that it’s not in the lead in any category. The motor is no headline-grabber. The fork is technologically intimidating, and there’s new hardware coming from several different directions. Is last year’s redesign enough to carry Kawasaki through all this? The short answer is yes. The KX450F will remain the safe choice in the 450 class. It’s not a gamble. It’s a bike that will succeed with smart and patient strategies. Just don’t expect a big jackpot. o