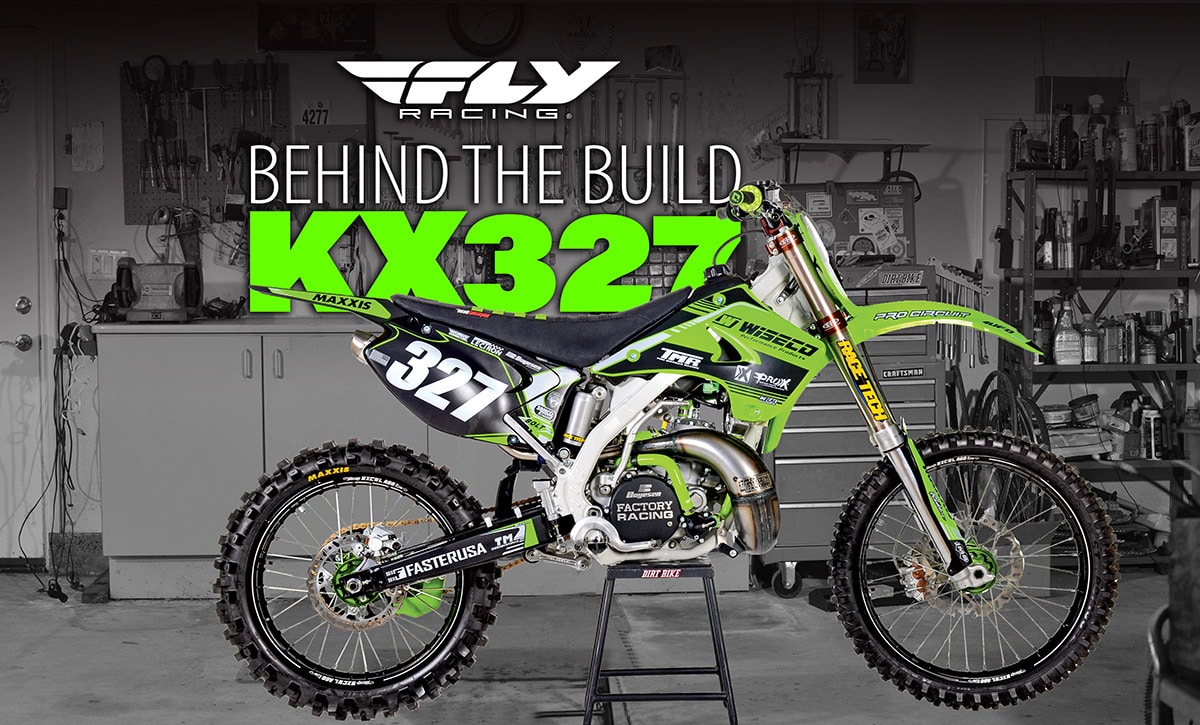 Working on “project bikes,” as they’re commonly called, never gets old. Some projects start with new bikes and some are Craigslist finds, but this bike has a unique story behind it. Kevin Bailey from Race Winning Brands takes us through this KX327 rebirth in his own words.

SECOND CHANCE
“After a phone call from a friend about an opportunity to pick up a cheap KX250 that was claimed to have been modified to put out 327cc for an old magazine project, I was intrigued. ‘Send me some pictures,’ I said. The frame had been powdercoated black with gold metallic sparkle, there was a spacer plate under the cylinder, and the sunbaked graphics bearing logos from the early 2000s suggested there was truth to the claims of this bike’s history. The deal was done, and the bike was taken home. And after a little research, we were able to confirm this was a media project built not long after it rolled out of Kawasaki’s doors back in 2003.

“When we started this project, the bike’s condition was textbook ‘roached’; however, we could see whoever built it the first time envisioned something unique that would stand out from the status quo. So, we set out to bring this bike back to life with that same goal. The most uniquely intriguing aspect was the engine. We found out it had originally been modified by Tom Morgan Racing (TMR) with a longer rod and oversize bore to achieve 327cc. Knowing Tom Morgan Racing’s history of designing and developing engines for Kawasaki, and even wrenching for some of the sport’s legends, we sought out Tom’s services to get this engine completely rebuilt.

“Morgan had done some updates to the 327cc engine package that have been available to the public since the bike was first built. TMR disassembled the stock crank and modified it to attain a +4mm stroke. The newly rebuilt crank utilizes a Japanese-made connecting rod kit from ProX Racing Parts complemented by new main bearings, seals and gaskets, which are also from ProX. For the top end, TMR worked closely with Wiseco to develop a custom, 74mm forged piston specifically for this engine package. Housing the new piston is the stock cylinder that’s been bored out and modified to TMR spec, along with the cylinder head.

“To help deliver the big two-stroke power of this 327, a completely new clutch was also installed, with a forged basket and clutch pack kit from Wiseco, and a new pressure plate and inner hub from ProX. This two-stroke powerhouse is now held together with an engine fastener kit from Bolt Motorcycle Hardware. Pre-labeled packets eliminated any guessing, and the zinc finish gave a factory look to the engine. Fuel delivery to the new KX327 powerplant is handled by a Lectron carburetor and Boyesen RAD valve intake system. A Boyesen Supercooler, silicone radiator hoses from Samco Sport and a high-pressure radiator cap were installed to keep the engine cool. A Pro Circuit Works pipe and R-304 silencer topped off this two-stroke engine package, providing performance and that signature Pro Circuit two-stroke sound.

“With the engine all ready to go, it was time to focus on the chassis of our KX327; it was definitely in need of some attention. We knew stopping would be critical with the big displacement power of this 327, so the complete front and rear braking systems got freshened up with ProX components. Both calipers and master cylinders were rebuilt and resealed with rebuild kits, and new brake rotors and pads were affixed to provide fresh stopping surfaces. To maximize stopping power, we used a ProX front rotor that is technically for a 2015-era KX450F, which bumped up the rotor size to 270mm, so we had to adapt with a new caliper bracket. The rear brake line was in good working order after a little cleanup, but the front line was shot. Thankfully, Ride Engineering offers a steel-braided line, fork-guard clamp and guide that helped button up the front braking system on this KX.

“The stock rims from ’03 had an odd, rounded-off shape, not to mention the cracks in the ones on this specific bike. The folks at Faster USA built a complete new wheelset boasting billet-aluminum hubs and Excel A60 rims to add some strength and a trick look to this bike. The new wheels were wrapped in fresh rubber from Maxxis, combining an ST front with an IT rear to help attack the tracks of Southern California.

“In the handling department, the saying, ‘You can’t teach an old dog new tricks,’ is only partially true for this ’03 KX, because you can bolt on precise, new parts to complement re-valved suspension. The crew at Race Tech set up the suspension for the original project back in the early 2000s, so they worked their magic on the forks and shock to freshen up the internals and update the custom valving setting.

“Holding the forks in place is a set of Pro Circuit triple clamps and bar mounts boasting the classic bronze anodizing. Pro Circuit was doing a limited run of classic clamps for Kawasaki two-strokes while we were in the middle of this project, so we jumped on it as soon as we heard. Sitting atop the clamps are ODI CFT Podium bars that provide flex adjustability, which is a big plus for comfort on older two-strokes. These were paired with ODI Emig Pro V2 lock-on grips and a clutch-perch assembly and levers from Works Connection. Finishing off the controls department is a pair of IMS Pro Series footpegs and an IMS shifter that help provide a positive feel when trying to tame this two-stroke.

“When it came to the bike’s aesthetics, we wanted a unique but clean look that also paid tribute to the two-strokes of this KX’s era. We went with a complete, OE-shaped plastic kit from UFO in classic Kawasaki green in the front and black in the rear. DeCal Works was tasked with coming up with a complete custom kit for this bike, and they hit the nail on the head. With a matte finish and a clean, tri-color design, this kit really captured the uniqueness of this build and pulled the look of the 327 together.” 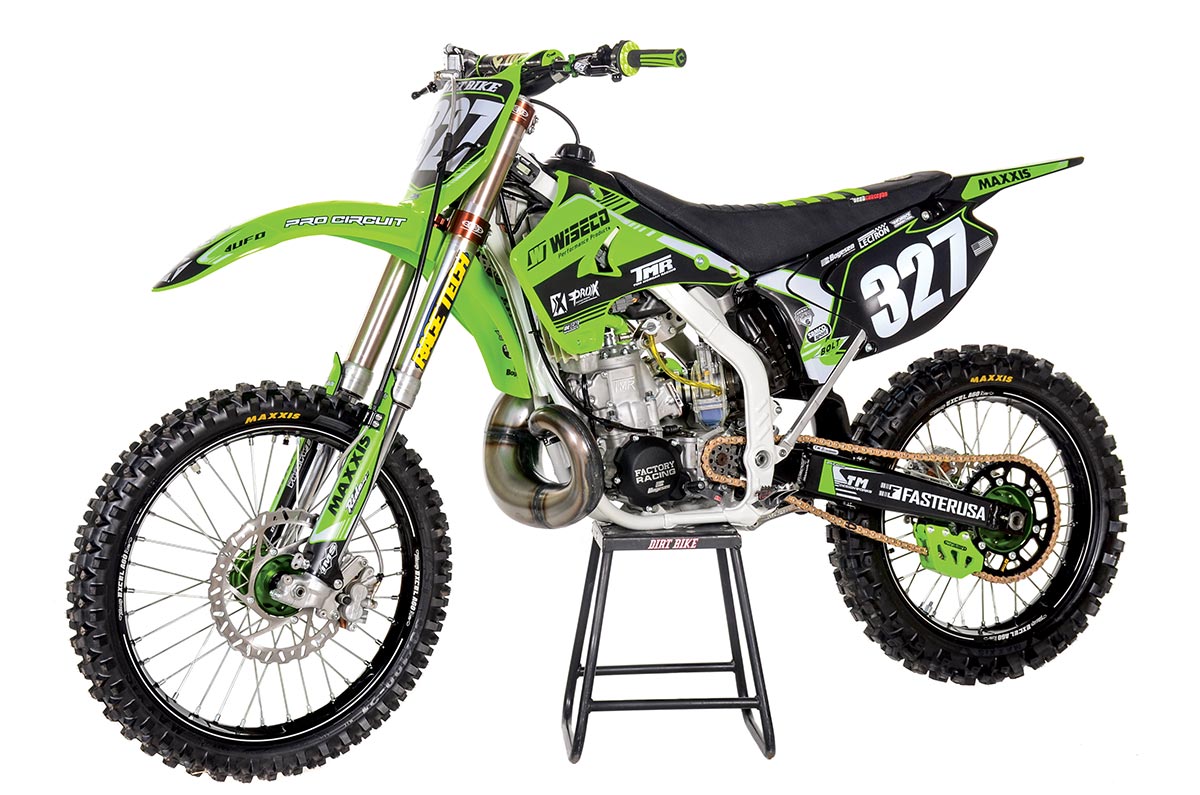 SPOTLIGHT-READY
We see project bikes come to life all the time in the DB workshop, but it’s not often we get to see and hear about them coming together like this KX327. Kevin and his crew did all the heavy lifting on this build, and that’s what we enjoyed—watching it happen. So, how is it? This engine delivers some seriously impressive power. It’s crisp and responsive with a very strong bottom and midrange, and it continues to pull on top long enough for us to back off before it does. It’s a big-bore, so you have to expect some additional vibration compared to the OEM version. TMR included a complete printed guide when the engine was returned to us. Everything from jetting to gearing to oil recommendations was included. Handling rivaled that of current two-strokes. This machine turns heads. No matter where we take it, people stop us to ask questions about it. In the words of Kevin Bailey, “This 2003 Kawasaki KX327 project was truly a labor of love, presenting its fair share of obstacles, bloody knuckles and frustrations over countless hours spent in the garage. But, seeing the finished product and listening to the two-stroke engine sing make it all worth it. This bike serves up nothing but ear-to-ear smiles and the freedom of being on two wheels.” We agree completely, Kevin!