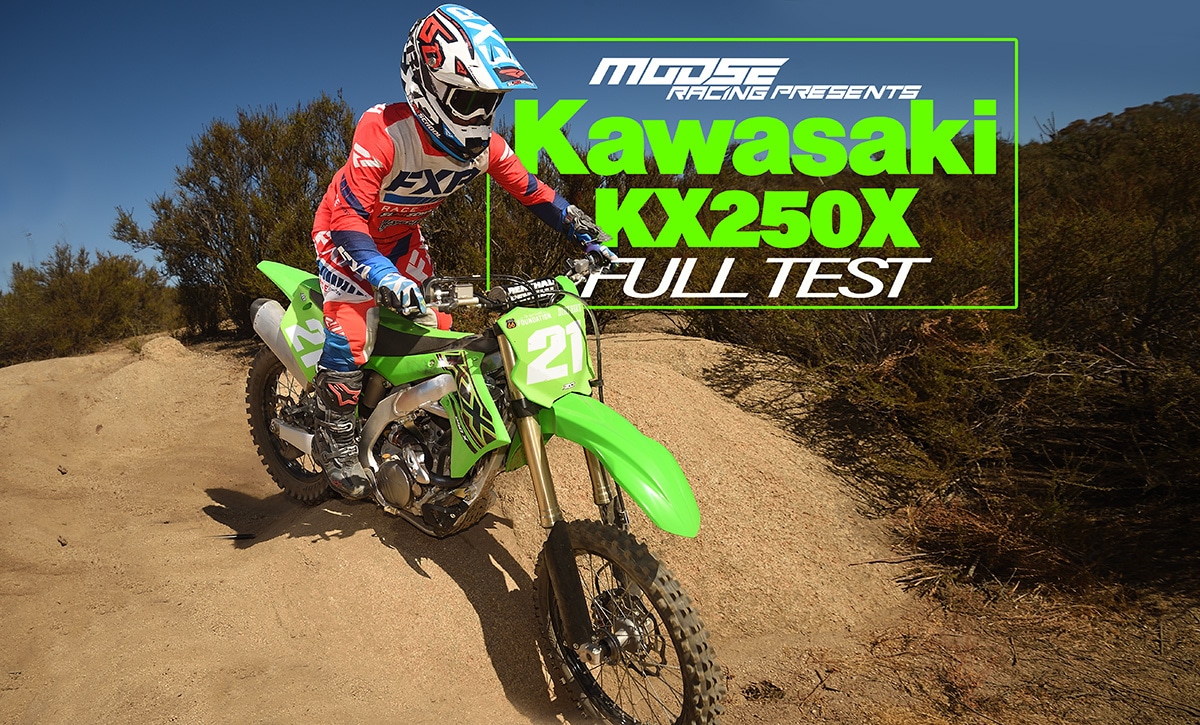 Kawasaki didn’t offer any off-road race bikes for years. Weird, right? This is a company that at one time dominated Baja and drove the U.S. ISDE team with riders like Jeff Fredette and Larry Roeseler. Yet, there hasn’t been a Kawasaki dedicated to off-road competition since the 2009 KLX450R—and even that wasn’t really a race bike.

That’s finally changed. For 2021, Kawasaki is offering the KX450X and the KX250X. The 450 we saw coming, but the 250 caught us off guard. It shouldn’t have. Team Babbitt Kawasaki has been campaigning a Kawasaki most of the year in the GNCC XC2 Pro class with Aussie Lyndon Snodgrass. He started the year on a KX250 motocross bike but finished it on the new 250X, earning his best finishes of the year.

The reasons for Kawasaki’s reignited interest in 250cc off-road racing probably revolve around the redesign of the 2021 KX250 motocross bike. It lends itself to off-roading. Not to dismiss Kawasaki’s efforts, but transforming the new KX250 into an off-road bike required very little. It already had electric start, so the rest of the program was simple: re-valve the suspension, sprinkle in some off-road parts, then put an “X” on the end of the name—instant off-road racer. There’s nothing wrong with that. Any more would have been overthinking it. 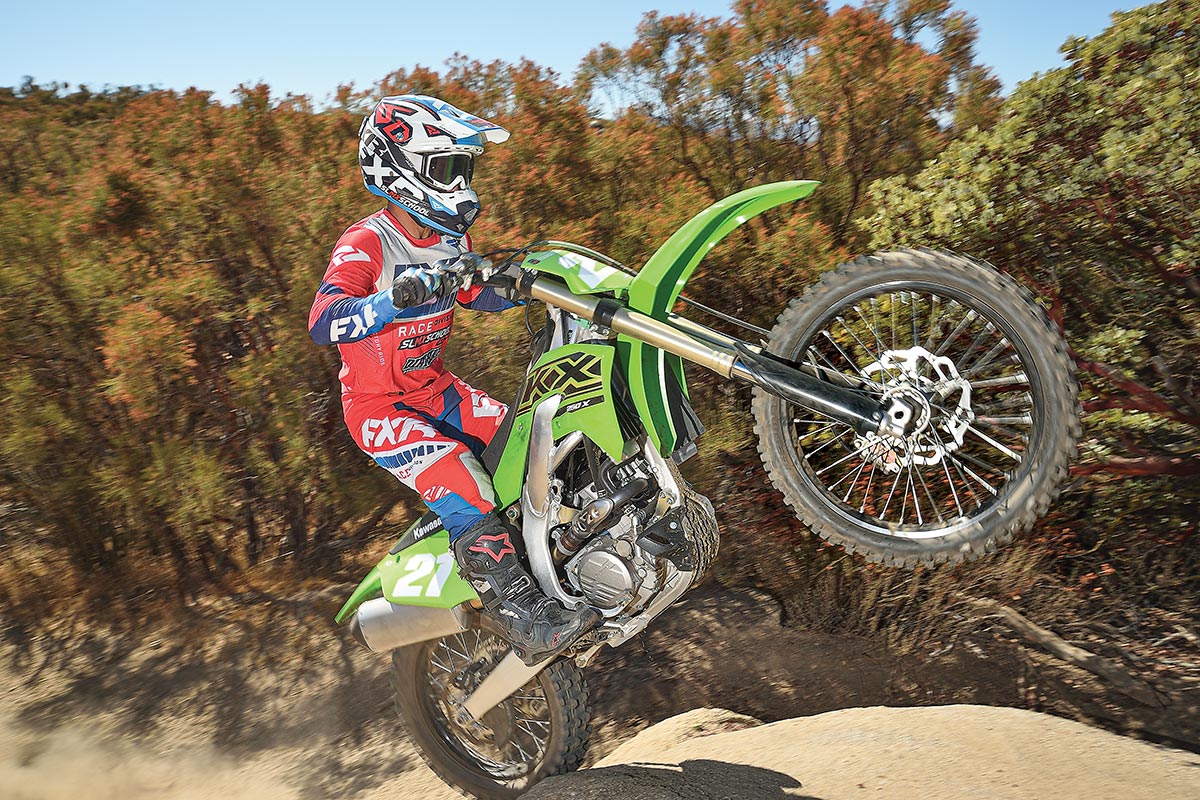 NEW CANVAS
It’s very likely that Kawasaki’s engineers were thinking about building a platform that could be adapted to both types of racing from the very start. One thing is clear: the KX250X is a racer, through and through. The motor is a high-rpm screamer. It’s mostly a new-from-scratch design, but some of the concepts were brought forward from existing motors. The top end uses finger-followers between the valves and the cams in order to attain more leverage and lift. That technology originally appeared on the 2020 KX250. That bike didn’t have an electric starter, of course, but Kawasaki did an amazingly clean job of integrating the starter motor onto existing cases. It doesn’t matter if the target buyer is an off-road guy or a motocrosser anymore; both markets require push-button starting. Even the most fanatical purists have now conceded that. The same can be said about the incorporation of Nissin hydraulics to work the clutch. At one time, the anti-hydraulic crowd was large and boisterous. Now, it’s just a few old-timers shouting from the back of the room. The clutch itself is also new for 2021. It does away with coil springs and uses what Kawasaki calls a “cupped disk.” This is similar to the KTM clutch design and has the characteristic of providing less resistance as the lever is pulled farther.

The whole chassis is straight from the Kawasaki KX450 motocross bike of 2019. That includes the frame, the airbox and the bodywork. It doesn’t, however, use the 450’s Showa suspension components. The KX250X has a Kayaba fork and shock, just as the motocrosser did last year. Fun fact: the KX250 never used an air fork. It was still plenty offbeat, though. From 2011 to 2019, it used a Showa fork with only one spring. The KX250X’s new Kayaba fork has two springs and is valved for off-road riding. The rear shock is re-valved as well and also has a softer spring than that of the MX version.

As mentioned, the conversion from motocross to off-road model wasn’t especially involved. Aside from the suspension changes, the bike got an 18-inch rear wheel, Dunlop AT81 tires, a skid plate, a rear disc guard, a 51-tooth rear sprocket and a kickstand. Kawasaki uses the coupler system for changing EFI maps. That means there are three maps stored within the ECU, and you change from one to another by swapping electronic plugs. Even those maps are the same as the ones in the motocross version. The only difference is that the X has the black coupler (the richest) installed when it’s delivered. The extra couplers that come with the bike are both leaner.

FROM TRACK TO TRAIL
Riding the 2021 KX250X is, not surprisingly, just like riding a 2021 KX250 motocrosser with soft suspension. In case you don’t know what that means, here’s what you need to know: it’s fast. The KX250 in either configuration is among the most powerful 250s you can buy. Down low, the power is nothing special, but once it starts spinning, look out. The KX moves. As you approach, say 10,000 rpm, where most motorcycles taper off, the KX is just getting started. It hits its stride and keeps going right to the rev limiter around 14,000 rpm. If you think that’s not the optimal recipe for a trail bike, you’re right. It’s a great recipe for a trail racer, though. The KX is the type of bike that likes to be ridden hard all the time. There’s no real penalty for riding it down low, though. It runs clean, doesn’t stall and doesn’t load up. It’s just that you don’t want to ride it down there when you know there’s a thrill ride waiting if you just delay that shift a little longer and open the throttle a little wider.

When you mess up and find yourself below the upper midrange fun zone, the KX allows you an easy cheat. The engine has excellent free rev—that is, when you pull in the clutch, it picks up rpm instantly. And, pulling in the clutch is absurdly easy. Some riders even say it’s too easy and encourages sloppy shifting. You know that you should downshift for that turn or that hill, but you also know that the KX will let you get away with ridiculous amounts of clutch abuse.

Kawasaki did a good job guessing the suspension requirements for off-road riding. But, as always, it’s still a guess. There’s no way to know if the bike will end up riding GPs out west or woods back east. For medium-speed riding on moderately rough trails, it’s pretty close to the mark; but, if you find yourself riding through a boulder field, it’s going to feel somewhat stiff. Likewise, if you’re riding anywhere where the average speed puts you in fourth or fifth gear, the KX is going to be soft. This isn’t anything new to off-road guys. The good news is that the KX’s components are excellent. KYB has been making Yamahas handle well throughout the years of the air invasion. If you’re lucky enough to be the right rider in the right terrain, the KX is going to be excellent. Plan on using your suspension-tuning budget to throw a party.

FIXER-UPPER
Kawasaki left a short list of items for the buyer to sort out. The fuel tank is only 1.7 gallons. That’s good enough for around 40 miles of trail or an hour of racing on a track. Still, you can’t always count on that range; sand always eats more fuel than hardpack. KTM, Honda and Husqvarna all have bigger tanks on their cross-country bikes. Likewise, they all have O-ring chains and most have handguards. You can fix all that, of course, but one thing you can’t do is add another gear to the transmission. The X has the same five-speed gearbox as the motocrosser; it has only a slight change in final gearing (a 51-tooth rear sprocket versus a 50). KTM, Husqvarna and Yamaha all went through the trouble to design six-speeds for their 250s. Do you need it? Again, that depends on who you are and where you ride. GP riders and desert racers are the guys who are most likely to need another gear. That remains the most daunting task for manufacturers offering an off-road bike. America is a very big place with wildly diverse riders. The stock KX250X will serve most of them perfectly without modifications. The fact that Kawasaki is back in the off-road game is the real takeaway here. It’s like scratching a 10-year-old itch.

A YEAR WITHOUT PAULO GONCALVES