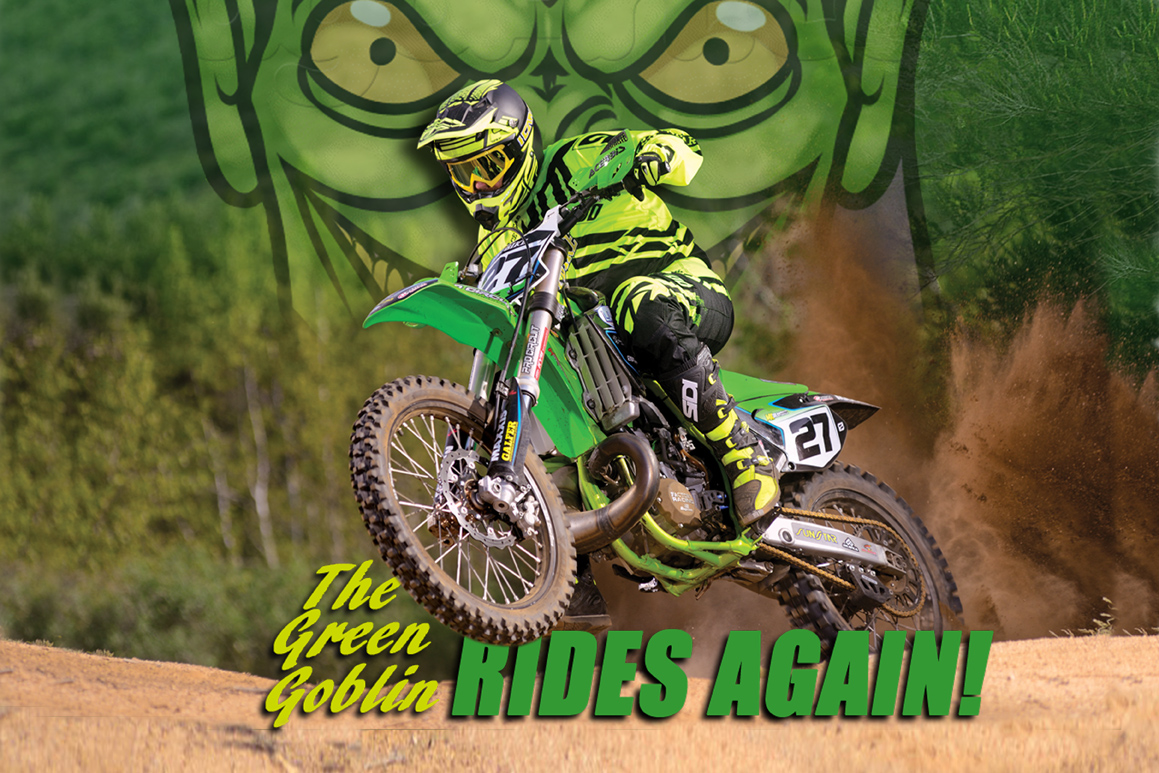 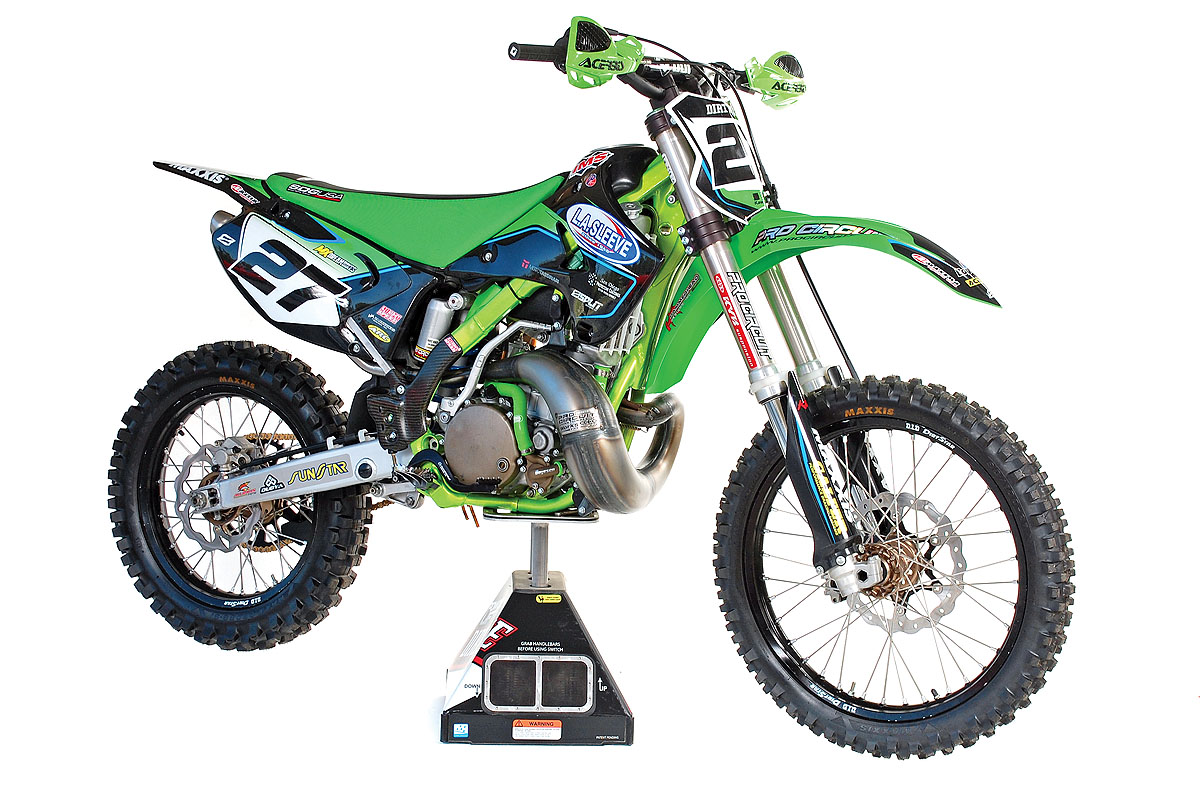 Rescuing something seconds from impending doom and rebuilding it beyond its former glory is something everybody can dream about doing. If you grew up reading comic books, this happened at least once an episode. This scenario was the inspiration for our latest build. We found a 2004 Kawasaki KX250 two-stroke that had seen better days and was literally on its way to the junkyard. After a lengthy conversation, we gave the very large and smelly man our lunch money, quickly loaded the machine into the truck and drove away before he could change his mind. So begins the tale of the “Green Goblin.”

We have learned over the years that with a bike build such as this, it’s better to tear the bike all the way down, leaving nothing to chance, because that one 25-cent piece you thought was okay really wasn’t, and it ruins the entire thing. We hadn’t done a two-stroke tear-down in a while, so we were a little surprised that only an hour and a half in our tear-down was complete. It was then time to take inventory and start getting things out to people. The engine was seized up solid, so we decided not to open it up. We took it directly to Mark and his crew at L.A. Sleeve. They told us that was a wise decision, because when they disassembled it, parts were falling out everywhere and the piston had actually broken in half, scarring up the cylinder. Needless to say, the entire engine needed to be rebuilt from top to bottom. 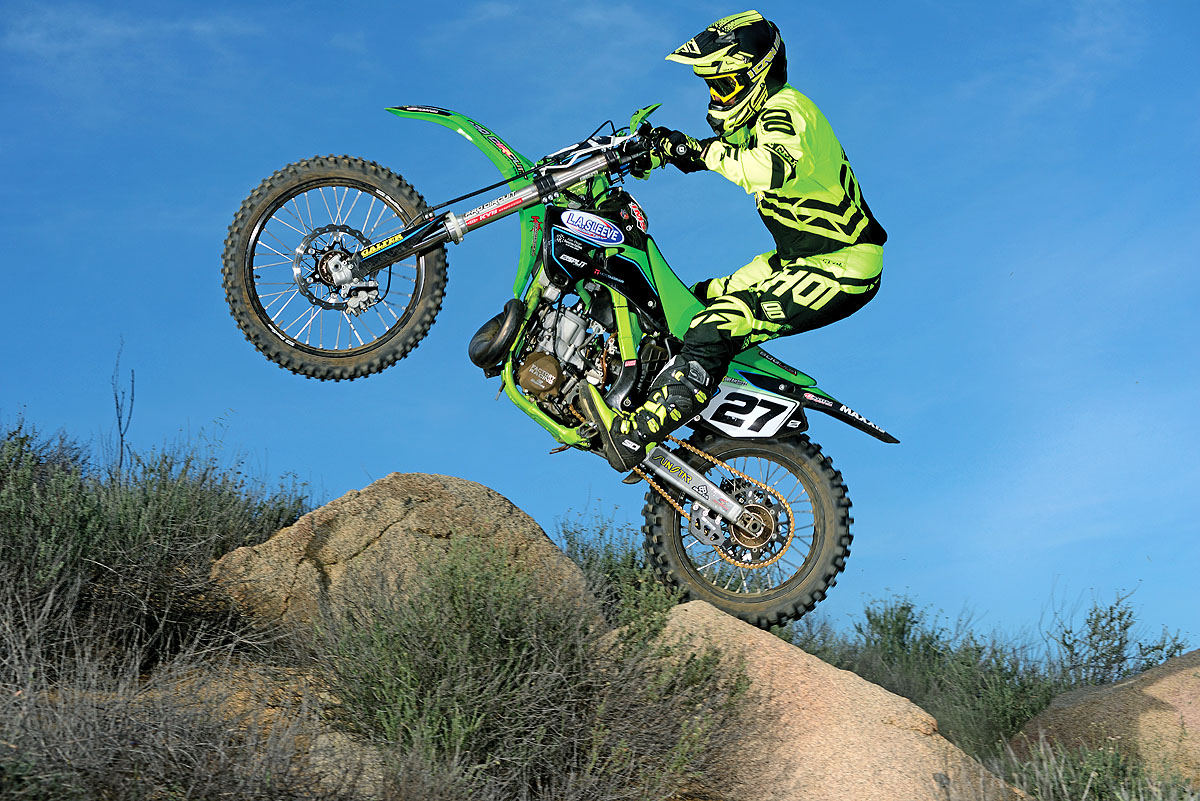 The good news for us was that L.A. Sleeve had all the parts needed in stock, and they do all the machine work in-house. The technicians at L.A. Sleeve prepared the cylinder by installing one of their Molly 2000 sleeves, matching it to an LAPC piston. The bottom end was rebuilt using a Pro X rod kit and a Hot Rods crank bearing and seal kit. All labor was performed in-house, so there was no additional waiting required. Our KX250 clutch was not in the best shape, so it was also replaced with a kit that L.A. Sleeve has designed to be a direct OEM replacement. Each kit includes an inner hub, pressure plate, clutch plates and clutch springs. We also had them install a Hinson Racing basket, because the stock unit was cracked. With the engine restored to 2004 OEM specs, we decided to add a Boyesen Supercooler, Pro Circuit works-style pipe and 304 Factory sound silencer, along with a V-Force 3 carbon reed valve to get just a little extra kick. The Goblin will run on VP Racing’s new VPR 101-octane fuel mixed at 40:1 using Maxima K2 synthetic two-stroke oil and Evans waterless coolant.

While the engine was being resurrected by L.A. Sleeve, we focused on the chassis. The frame received some attention from Chris at San Diego Powder Coating. He mixed up a custom green color and added some metallic flakes. We call the color Monster Energy Green. All the bearings, bushings and seals on the frame, linkage and swingarm were replaced using All Balls Racing rebuild kits. Bones Bacon at Pro Circuit went through the suspension, replacing everything that was worn out, and then valving it and putting heavier springs on both ends to get it ready for us to rip off-road.

Getting the Green Goblin ready for off-road-style abuse required some research. How many companies are going to make parts for a 13-year-old two-stroke? Well, as a matter of fact, lots of them. And, thanks to the fact that many of the parts are similar to those on the newer four-strokes, some companies have parts that fit but don’t even realize it. We installed an IMS 3.1-gallon tank with a dry-break system, IMS Pro pegs, TM Designworks chainguide, and GPR Version 4 stabilizer complete with DH1 top- and bottom-machined billet-aluminum triple clamps. Dubya laced up a set of Talon hubs to some D.I.D. DirtStar rims, and we wrapped those in Maxxis Maxxcross SI tires.

We added some braking power with a Galfer 270mm oversized front rotor kit with steel-braided lines on both ends. We used 2004 OEM black replacement plastics from Acerbis for the front number plate, and the fender was upgraded to the brand-new 2016 model’s style. This is not a direct bolt-on. It requires some slight modifications, but nothing too tough.

The Green Goblin was a huge success all around, and it has taught us some valuable lessons, like don’t get rid of all those two-stroke spark-plug wrenches that came free with new bikes back in the day, because two-stroke spark-plug caps go bad often. The most valuable lesson of all is to have a couple universal bolt kits on hand when starting a build like this. They can keep the build progressing and save your sanity at the same time. Oh yeah, the bike runs great, and everyone who rides it gets off smiling from ear to ear. Of course, that’s until it runs out of gas, because the rider doesn’t want to stop and have to push it back to the pits. But, hey, we can relate. It has happened to us as well.

We went a little over the top with the Green Goblin build, but even with rebuilding the entire engine, parts and labor were only about $1600. And if you add up all the other items we installed, it still doesn’t come close to the cost of a new four-stroke. Bottom line: we had a blast riding this two-stroke as well as building it. With the Green Goblin completed, we are already looking for the next bike to rescue from the junkyard. o