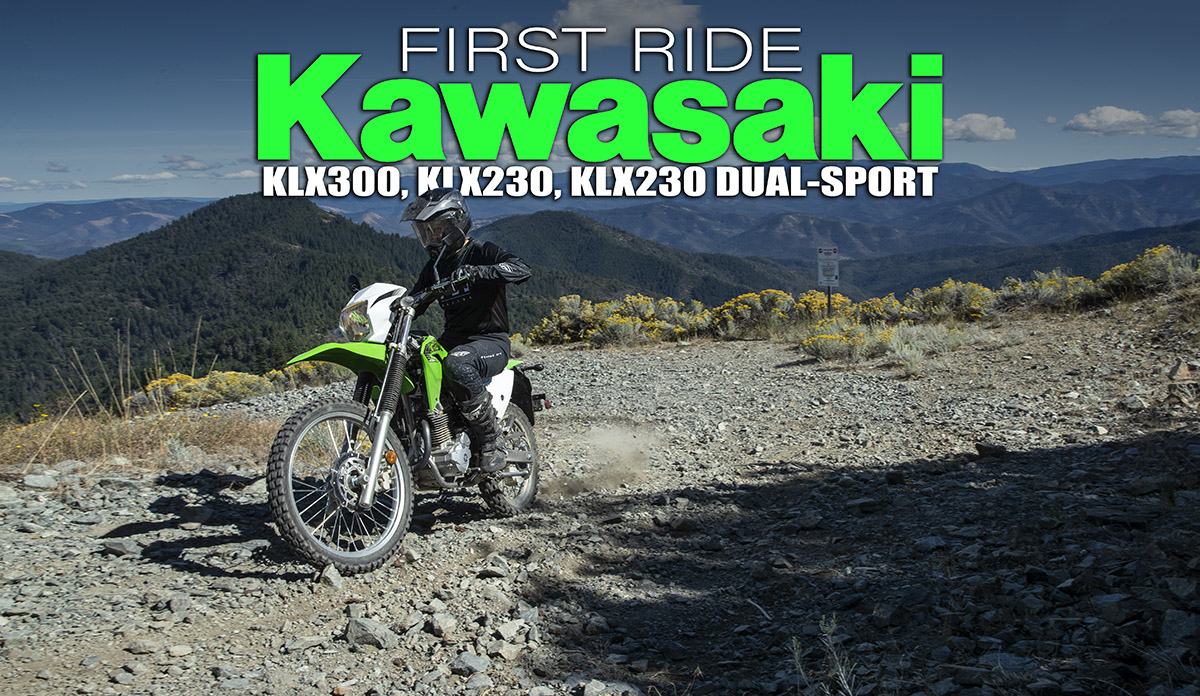 Kawasaki just introduced three new bikes to the press in Oregon. With the Kawasaki KLX230 dual-sport, Kawasaki KLX230R and Kawasaki KLX300R—Kawasaki took a big step (three steps, actually) toward returning to the off-road market, also filling out its KLX line of trail bikes.

After spending more than a decade off the radar in North America, the 292cc trail bike is back, featuring an electric-start, EFI version of the liquid-cooled six-speed from the ‘90s. Even though this is called an “all-new” model, it’s not unfamiliar to American off-road riders. The KLX300R is docile and friendly to ride—roll it on out of turns and it will grunt along just fine. While the Kawasaki reps emphasized that the KLX300R is not a competition model, I have to admit, I wouldn’t hesitate to line up for a woods enduro on this bike.

The link-mounted shock offers preload adjustability along with compression and rebound damping, but the 43mm conventional fork is not adjustable at all. On the scale, she’s got some heft—280 pounds of it, according to Kawasaki. The company’s positioning of the KLX300R as a trail bike or “play bike” is so that it won’t get lumped in with the likes of KTM’s XC-W, Honda’s CRF-X or Yamaha’s WR. That class of machine, it is not. But in the forest trails of the Pacific Northwest where we rode, it can hold its own. In high-speed, sandy or whooped-out conditions? Probably not so much. Think a four-stroke version of the Kawasaki KDX200 two-stroke.

The all-new 2020 Kawasaki KLX230R features a 233cc air-cooled SOHC four-stroke engine with fuel injection and electric start. For adult beginners, those getting back into off-road riding, or the casual rider who doesn’t want the complication of a full-size competition model, the KLX230R is the green light you’ve been waiting for. It’s green, it’s light, tons of fun and it won’t break the bank.

Unlike the resurrected KLX300R, the KLX230 is a clean sheet design, with an all-new engine and chassis, which Kawasaki points out were designed together. It has full-size wheels (21-inch front and 18-inch rear), but the KLX230R is only a touch smaller than a full-size model. It fills a much-needed gap between a large youth bike and a full-size model. Kawasaki reports a seat height of 36.2 inches on the KLX230R, but anyone with 31-inch inseam can reach the ground comfortably.

Right off the bat, there is an important distinction to be made here. While the KLX230 shares a platform with the KLX230R off-road model, it is, without doubt, a different animal. With amenities like a headlight, LCD dash, keyed ignition, metal tank, mirrors, brake lights, emissions components, passenger pegs, there’s a lot more on board the KLX230, which amounts to an extra 40 pounds over its fraternal twin (and you can lump a few more pounds on for the ABS model). Along with different suspension components, the KLX230 and KLX230R each have their own unique character. 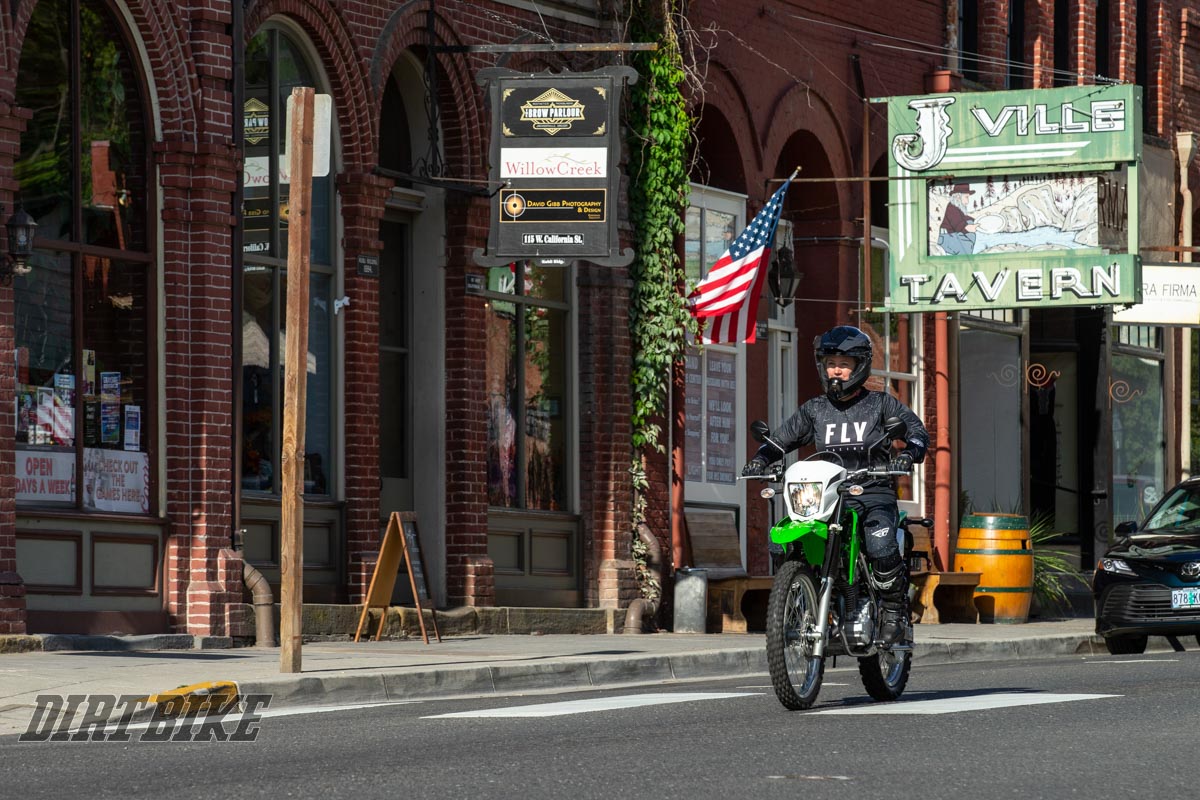 The KLX230 was surprisingly capable on the road. It gets up to speed at a respectable pace, and will hum along at +60 mph quite comfortably. This isn’t exactly its strong point, but it’s nice to know the road capabilities are there, and for more than just stitching the dirt roads together. In fact, this bike would make a great city-street/back-country runabout.

At a claimed curb weight of 293 pounds (for the non-ABS model we tested), its weight is noticeable, especially when you’re trying to accelerate out of turns. But get it on a trail, and it’s clear that there’s a little dirt-bike think, buried under all the street accessories. It was a blast on the trail, and is easy (and tempting) to get it moving at a good pace. But the supple suspension will quickly remind you to slow your roll, because unlike its R counterpart, it’s all too easy to bottom this one out. For the larger riders in our media junket (+200 lbs), it seemed that a sneeze would result in a metal-on-metal clack of the fork.

But this bike isn’t for the aggressive (or even intermediate) trail rider. It’s for the casual rider looking to cruise down dirt roads, or someone looking for a compact runabout to stash at the weekend cabin, or mount on the back of the RV. With street-legal designation and an air-cooled, fuel-injected engine with electric start, the KLX230 is the ultimate in low-maintenance versatility. You can take it into town for lunch, or just as easily take it on a fun run up a mountain road. Look for more on the new KLX line in the December, 2019 print edition of Dirt Bike.