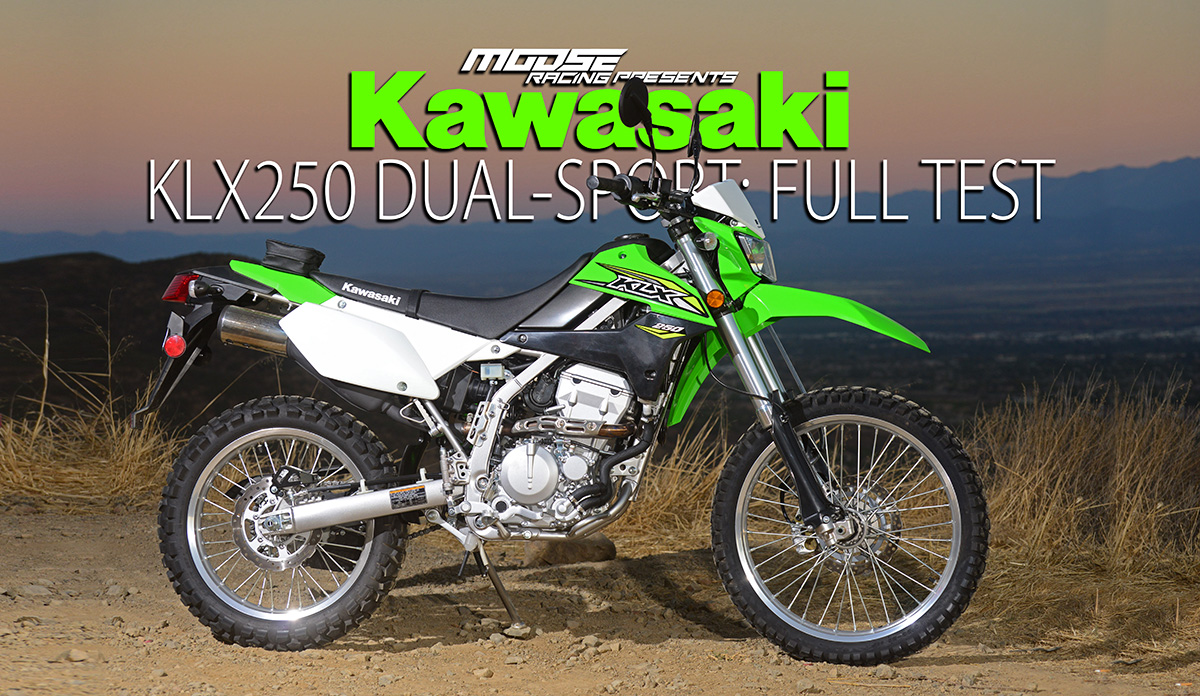 The 2018 Kawasaki KLX250 was recently reintroduced after a short absence from the lineup. It’s not especially high tech. It’s not powerful, light or sophisticated. In just about every way, it’s the opposite of the KTM 250EXC that steals the spotlight in most dual-sport threads. But it’s still a legitimate 250cc dual-sport bike, and it fills a crucial need in the motorcycle world perfectly.

This bike has history. Back before four-strokes were mainstream in the dirt, Kawasaki loved to dabble with off-road thumpers. The first version of this bike arrived around 1994 as a full-blooded dirt bike. It was followed by the KLX300 in 1997. The 300 had more displacement, a larger tank and a few other upgrades. In terms of dirt bike technology, the KLX was way ahead of its time. It was a compact, DOHC, liquid-cooled four-valver in a perimeter frame. In performance, though, it was no match for the two-strokes of the time, giving credibility to the notion that four-strokes would never catch on.

The bike had occasional off-road racing success with riders like Larry Roeseler, but it was mostly considered a play bike. The street-legal, 250cc version came in 2006 with electric start, and by 2008, the dirt-only version was dropped. The dual-sport bike was available until 2014 when emission rules made it clear that carbureted bikes would have to go away, sooner or later.

Now the KLX has returned with fuel injection. The main point to the bike is the price. It’s $5349 for the standard green one and $5549 for the Matrix Camo edition, which has different graphics and a blacked-out frame and motor. That falls right in line with the wildly popular Honda CRF250L, which sells for $5149. Both are manufactured in Southeast Asia rather than Japan to keep the price low. It’s interesting to note that the KLX was once made in Japan and that its quality survived the transition flawlessly.

So let’s get our definitions clear. This is a dual-sport bike in the traditional sense of the term. It’s made for riding in the dirt and on the street with ease. Bikes like the KTM 250EXC, the Husqvarna FE250 and the Beta 350RR-S have given rise to the term “hard-core dual-sport.” They aren’t the same thing. The KTM and its ilk are based on race bikes. They’re made to perform as highly as possible in the dirt and still keep their street-legal status. Accordingly, the KTM’s price is around $4000 more than the KLX’s. The key measurement of the Kawasaki’s success isn’t horsepower, weight or any kind of race-oriented performance; it’s comfort.

The Kawasaki KLX250 is a quiet, friendly, inviting bike that you can spend hours riding at a casual pace. The riding position is natural, the seat is cushy, the suspension is plush and the engine is nearly vibration-free. It’s not especially fast, but it doesn’t need to be. It can keep up with freeway traffic, climb moderate hills and pull itself through deep sand. If you try riding fast on rough trails, you run into limitations quickly. The bike is well over 300 pounds with fuel, and the suspension is very soft. Kawasaki did give the bike a moderately sophisticated fork with adjustable compression damping, but it’s still no racer. The tires are good for pavement and hard-packed dirt roads—nothing loose.

If you feel self-conscious when you ride in the dirt with a KTM, Husky or Beta, the best remedy is to lure them onto a long ride on smooth dirt roads or pavement. They’ll still have faster, lighter bikes, but at the end of the day, they’ll feel like they’ve been wrestling a rabid Rottweiler, and you’ll be fresh and happy.

Kawasaki did a good job with the fuel injection, which is the only aspect of the bike that’s truly new this year. It starts easy and warms up quickly. The older version took forever to get out of bed. The KLX still has an occasional hiccup when you grab too much throttle, but it’s still a small-bore four-stroke and that’s part of the deal. The brakes are surprisingly good; they’re certainly better than you expect on a budget bike. We haven’t yet done a back-to-back comparison with the Honda CRF250L, which is the Kawasaki’s main rival, but it seems the KLX’s strong points will be the brakes, clutch and suspension.

Yamaha is in this market, too, with two different models. The WR250R is a little more performance-oriented and priced at $6649. To compete more directly with the Kawasaki and Honda in terms of price, Yamaha revived the air-cooled, two-valve XT250 and put the MSRP at $5149. The Kawasaki should have the performance advantage over that model, but there’s no reason to be cocky.

The KLX is a mild bike that doesn’t put pressure on its rider to perform. It doesn’t ask you to be an athlete or even to try very hard. It goes from A to B in the dirt in comfort and with reliability. There will be some riders who try to improve the KLX’s off-road ability with better tires and suspension mods. It’s certainly possible, but that’s kind of missing the point. Part of the bike’s appeal is because it doesn’t need to go fast or jump high to have fun. As it turns out, there are riders who are like that too.