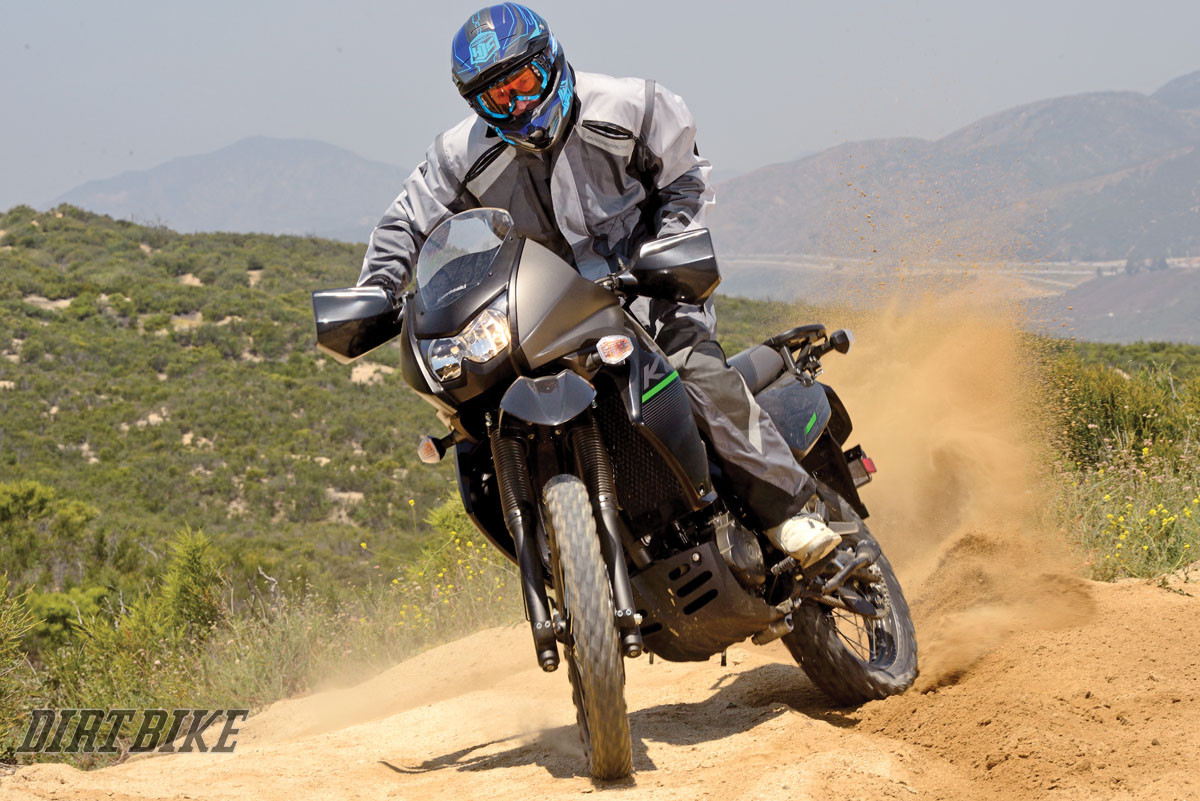 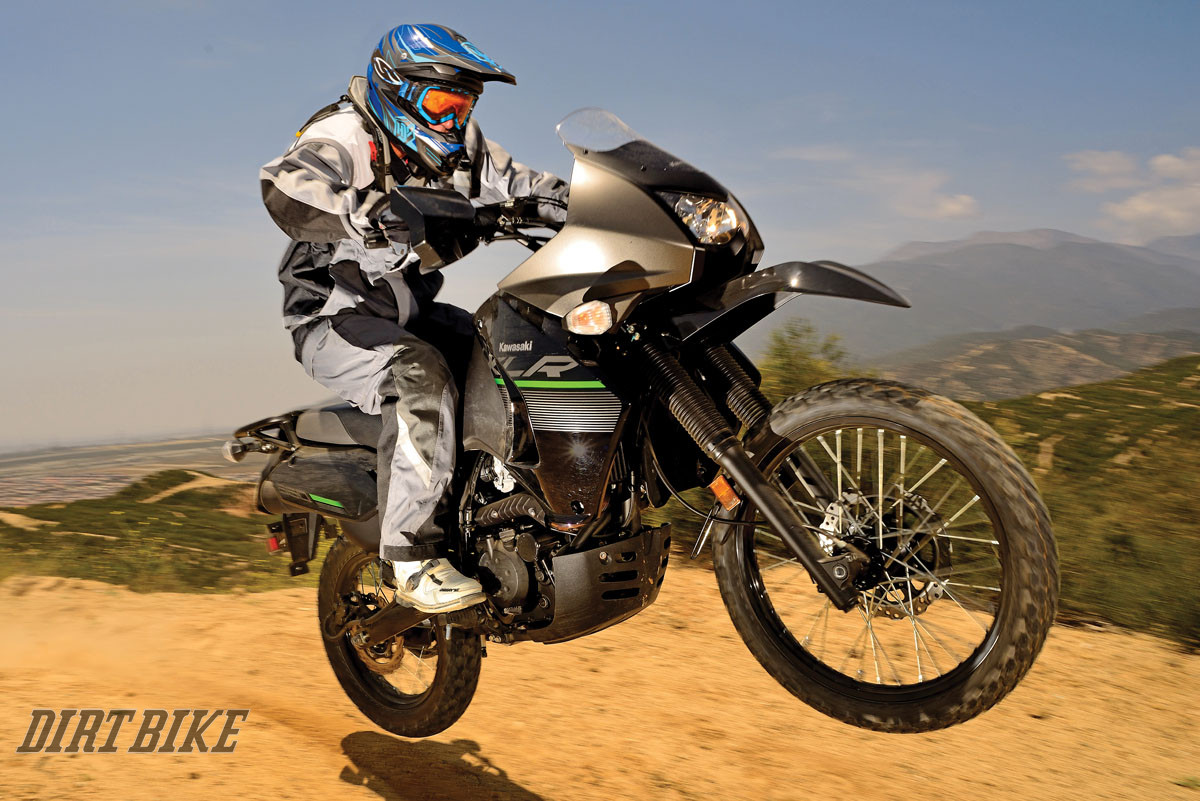 Kawasaki’s KLR650 is the crocodile of the motorcycle world. It survived motorcycling’s mass extinction of the ’80s, endured the icy economy of the ’90s and withstood financial upheaval in the 2000s. It was bullied by serious dirt bike riders, ignored by street guys and abused by commuters. And it’s still here. What’s more amazing, it’s having its own little renaissance. The KLR650’s day has finally come, and it’s getting more respect and more attention than ever. It is today’s best-selling dual-sport bike, and it’s about time. 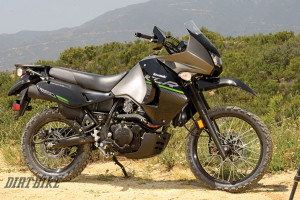 We’re as guilty as anyone. Up until about 2006, we ignored the bike like everyone else. It wasn’t a dirt bike and had been around so long it was like wallpaper in the Kawasaki line.  Two things happened in ’06: The KLR changed for the first time in decades. And then we changed.

The arrival of big adventure bikes from BMW and KTM suddenly made us look at the Kawasaki in a different light. It really was a dirt bike by those standards. The redesign in 2008 was certainly important, but the KLR’s place in the market was much more significant.

In its soul the KLR is the same thing it’s always been—it’s a mildly tuned, liquid-cooled, DOHC 650 with technology from the early ’80s. It was built on a budget with inexpensive bars, brakes and wheels. There’s fuel injection, no electronic suspension control, no anti-lock braking and no traction control. But, it has four key features that make it irresistible.

First, there’s a frame-mount fairing that came along in 2008. Prior to that it had a much smaller fairing that wasn’t half bad, either. Next, it has a 6.1-gallon fuel tank that can carry you as far as 300 miles. Then there’s a big luggage rack that provides a sturdy platform for luggage and accessories. And, most important of all, it has a $6499 price tag—still. You can buy three KLRs and a used grand piano for the price of a well-equipped BMW R1200GS Adventure. 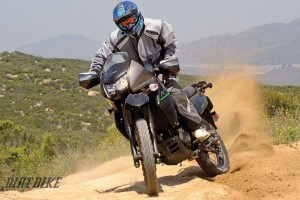 WHAT YOU GET, WHAT YOU DON’T GET

It almost goes without saying that the KLR is the best value in the adventure bike world. But we’ll say it anyway. The price makes it hard to ignore. Anyone who is about to spend $20,000 on a premium machine like the BMW GS or a KTM 1190 must hate that the KLR even exists. It makes you come face to face with the impracticality of virtually any other motorcycle. If it makes you feel better, the KLR has its limitations. It’s not especially fast. Even by the standards of 650cc singles, the KLR is a little sleepy. It goes freeway speed comfortably, but there’s no rush of acceleration available if you’re doing 65 and you need to make a quick pass. It lumbers forward, but doesn’t like it.

After transitioning to a fuel-injected world, it’s interesting to go back to a carburetor. The startup procedure takes a little more effort. You usually have to use the handlebar-mounted choke, and then you have to remember to turn it off. There’s a fuel petcock with a reserve position. Learn where it is and how to reach it in a hurry. There’s no fuel gauge, so you don’t know how much range you have until you run the main tank dry. You’ll have a few frantic seconds to fumble the petcock into the reserve position. Fuel mileage is also a little disappointing. The KLR gets around 50 mpg, which isn’t that much better than a 125-horsepower BMW. Fuel-injected singles do much better. The next change that Kawasaki makes to the KLR will doubtlessly be EFI.

This year Kawasaki addressed two long-standing complaints: the suspension is stiffer and the seat has been upgraded. Both are welcome changes. The suspension used to bottom and wallow even on the street. KLR riders just accepted the fact that the shock and fork had to be upgraded. With stiffer springs, the bike is now usable in the dirt without modification. That isn’t to say it’s great, but the main complaint of it being overly soft is no longer valid. Same goes for the seat. It has new foam and a different contour. Now you can get through almost a full tank before you have comfort issues; it used to be only 60 miles or so. The overall comfort rating is decent.

HOW GOOD IS IT?

In most ways, the KLR is better than it should be. The fairing keeps wind off your upper body, the handguards are huge, and its overall off-road capability is comparatively good. It’s more agile than any of the twin-cylinder adventure bikes, but don’t get carried away. The Suzuki DR650 and the Honda XR650L are both more off-road-worthy, especially the Honda. It is, however, more of a dirt bike than the heavier-but-faster BMW Sertao 650.

Bottom line: if the adventure bike market were driven by pure Vulcan logic, no one would buy anything else. In terms of value, the KLR is a hands-down winner. Passion, status and pride are different issues. In those categories, the KLR’s price might be a deterrent. A 30-year-old bike that costs less than most scooters doesn’t turn many heads. Kawasaki offers the bike in a special edition this year, called the New Edition. The name is probably an internal translation that made it to the public by accident, but it offers a little more bling for $100 more. Then you can build up the bike with a world of high-end accessories like bags and guards, effectively doubling the price of the bike. The KLR can be anything you want. Just understand that there’s still a pre-Cambrian reptile under it all.

To read about riding the great divide on a KLR, click here.

JUSTIN HILL: A DAY IN THE LIFE