KAWASAKI KDX500 2-STROKE: BEHIND THE BUILD 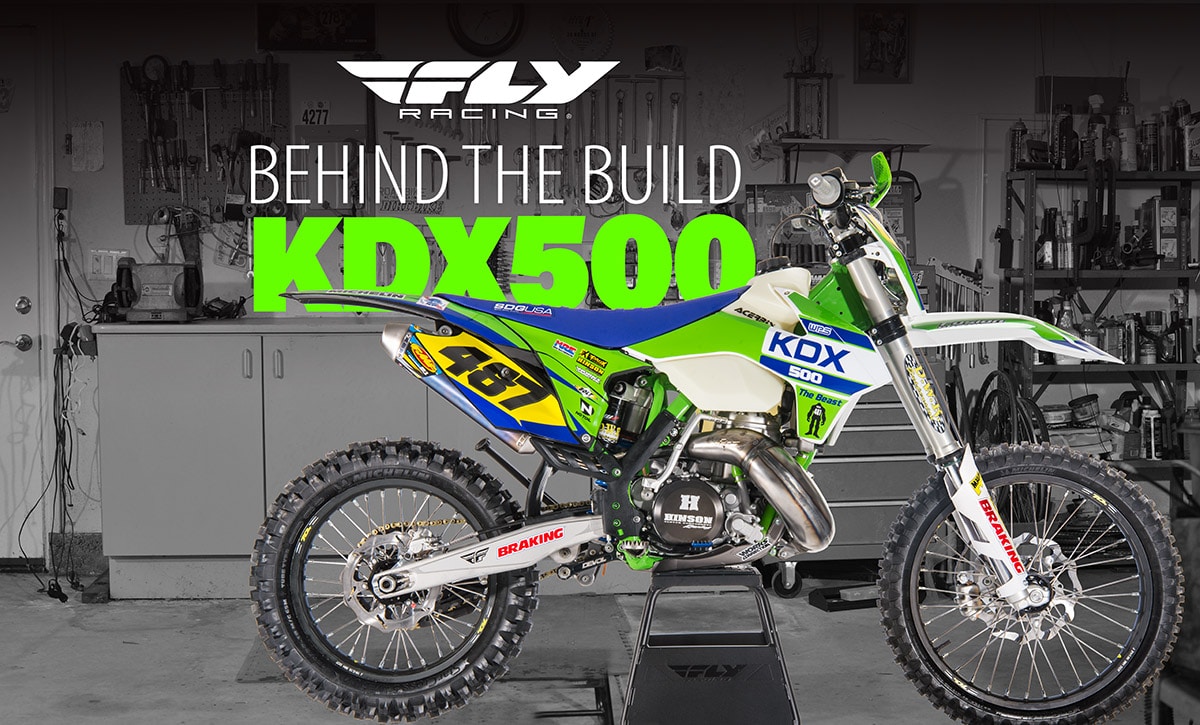 When it comes to 500cc two-stroke projects, they usually go one of two directions: the first is a complete restoration of the stock steel-framed chassis, or the second is taking the two-stroke powerplant and fabricating it into a modern-day, four-stroke, aluminum-framed chassis. The debate on these two types of builds could go on until the end of time about which concept is better, and even the magazine staff is torn in different directions. However, when it comes right down to it, we have to be honest and say both are enjoyable to ride. We decided to change things up a bit on this build, and you might be surprised with the results.

We didn’t try to reinvent the wheel here, but did rethink our methods of madness. As you might have figured out from the title of the story, the 500cc two-stroke engine is out of a 2004 Kawasaki to be exact. After long hours of deliberation, the decision was made to use a steel-framed chassis. No, not a Kawasaki chassis. We instead used a main frame, swingarm and subframe of a 2013 KTM 250SX two-stroke. The oval-tubed steel KTM frame provided much-needed flex characteristics and, frankly, made it easier to chop up and weld during the fabrication stages. 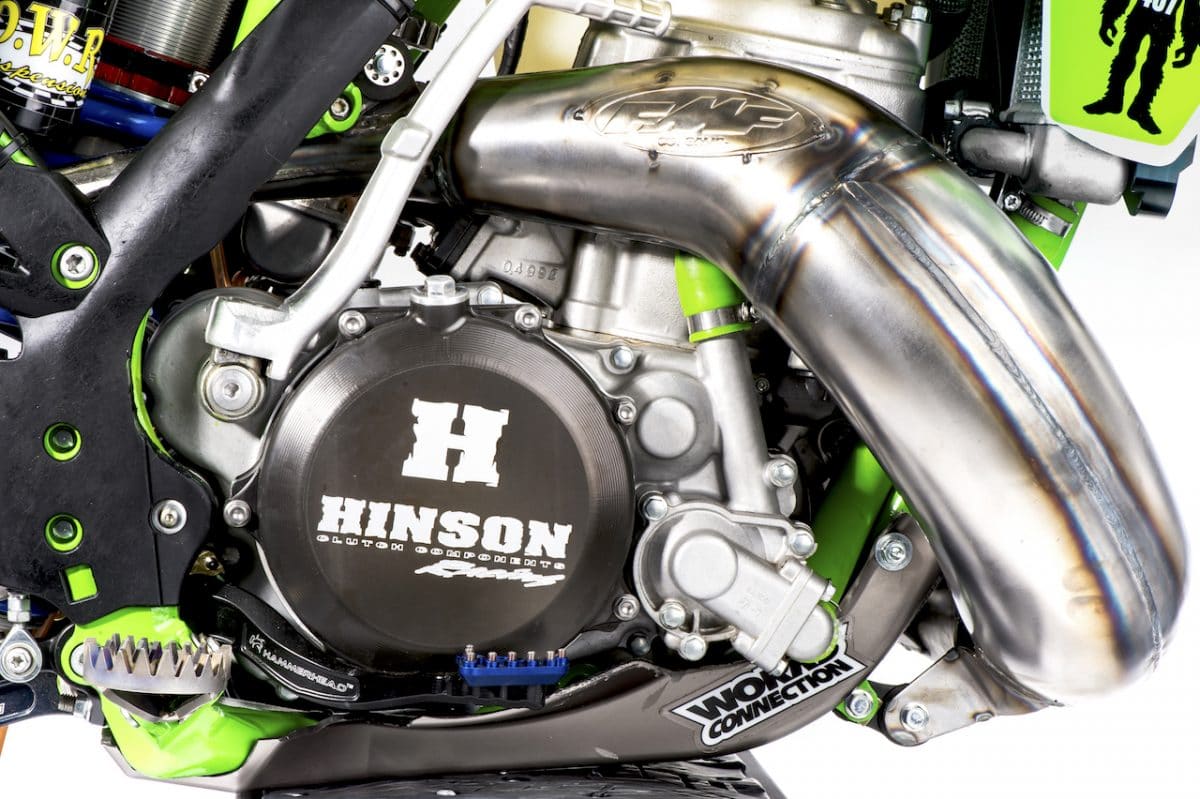 With the major decisions made, it was time to start cutting and welding. When the KX500 engine was on the ground next to the KTM chassis, it looked like there was no way it was going to fit, but surprisingly, the OEM 250SX engine cradle was utilized (with modifications of course). The frame-cradle tubes were notched, and chromoly tubes were welded into place for the bottom engine-mount bolts. This was done to get the engine crank as low as possible to keep the overall center of gravity low. The only other frame modification was a strategically placed dent allowing access to an engine-case bolt. After all the modifications were completed, the main frame was sent out to be powdercoated Kawasaki Green. 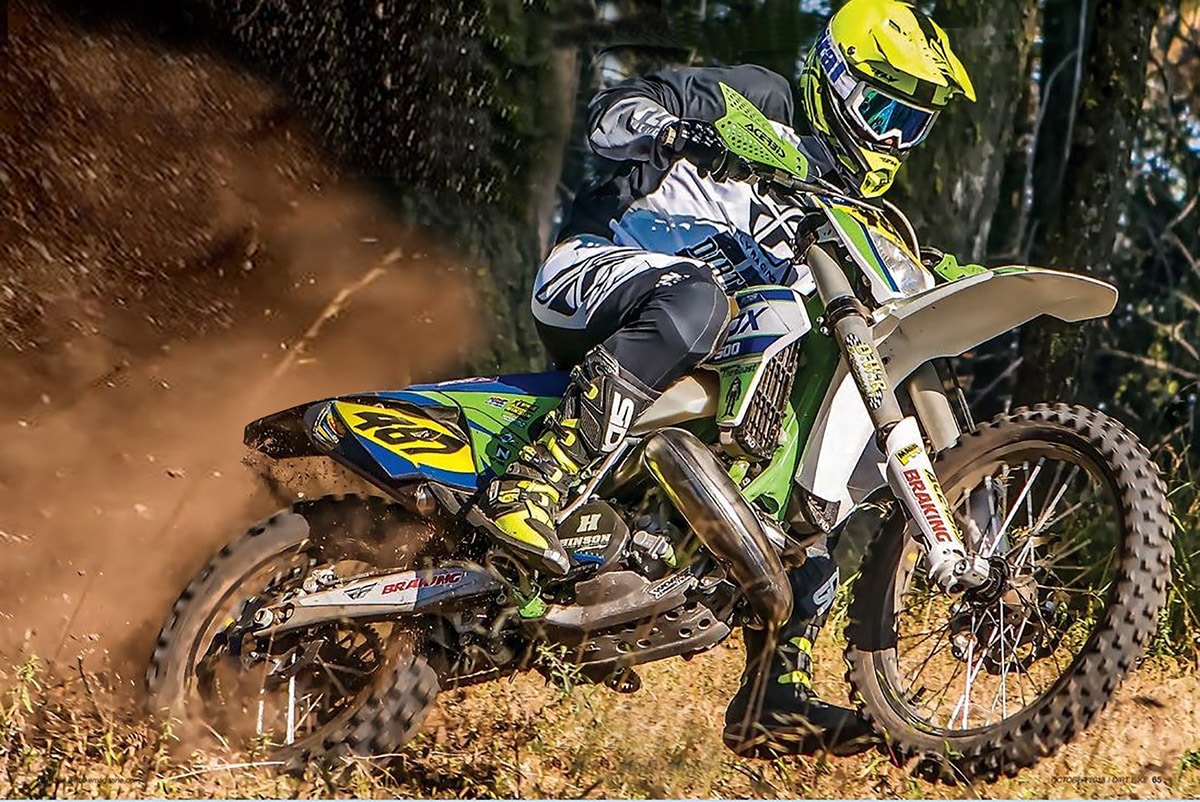 The engine underwent more modifications, both internally and externally, than the frame. The Kawasaki KX500 cases had to be bored out to accept a KTM swingarm pivot bolt. The countershaft and rear-sprocket alignment are crucial on a build like this, so new rear-engine spacers were machined to ensure precise fitment. Sliding the engine over about 5mm did not pose a major issue, only because the frame rails were wider than the KX500’s main engine cases. Internally, the engine was completely rebuilt using ProX parts, and the crank was balanced to help reduce vibration.
Our KX500 powerplant did get some factory-level engine modifications, but not to increase the overall horsepower. KX500 clutches were always a nightmare to change, because basically the entire right-side case had to be removed. The stock clutch cover was sliced, diced and machined to accept a newer KX450 Hinson cover with Hinson billetproof components used inside. We lucked out on the FMF pipe, because they had a couple leftover units from when Donny Emler and Danny LaPorte built a motocross version of our KDX a few years back. Pacific Crest Pipe Repair made the expansion chamber look better than new for pictures. 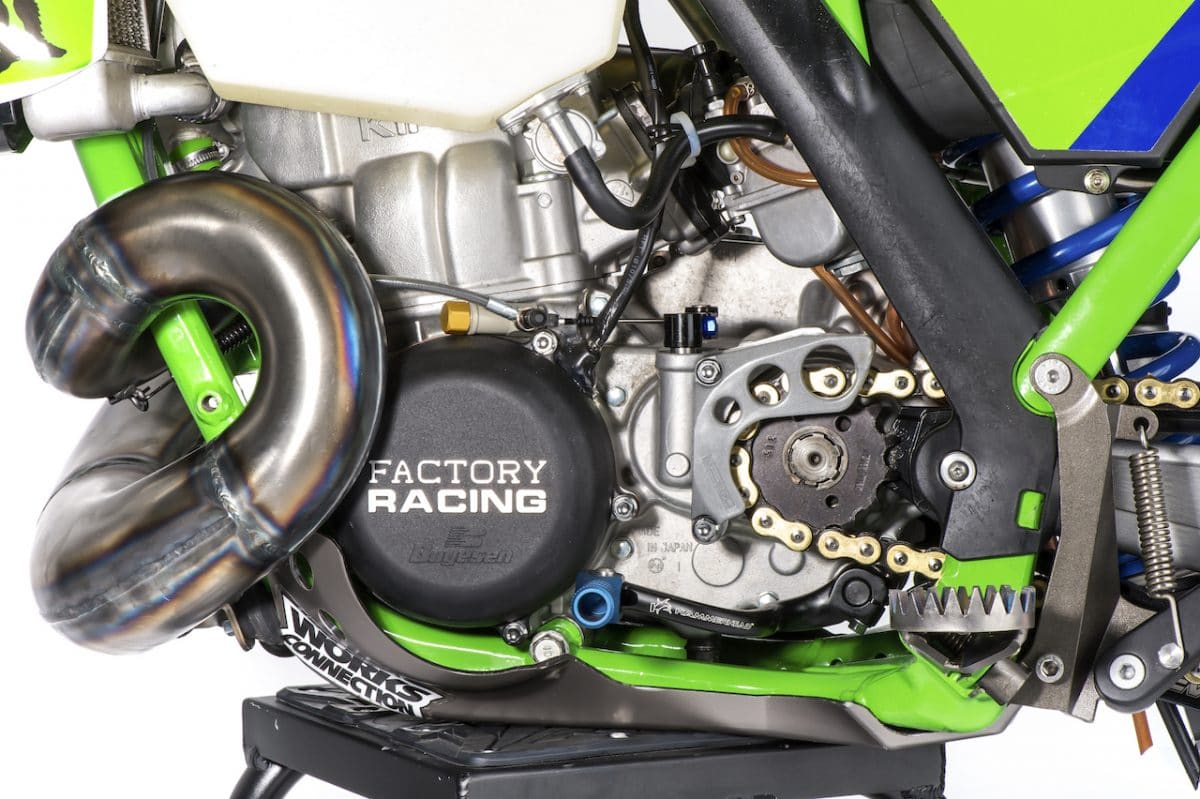 The KX500 power-plant fits perfectly in the KTM chassis.

With modifications done, our focus changed to off-road bolt-on necessities. This was made way easier with the newer KTM chassis, as parts are available in abundance. Magura hydraulic clutch assist, brake-master cylinders, lines and calipers were installed with Braking rotors. Pro-Wheel black hubs and 70-R rims added some style and strength to stand up to off-road abuse. Michelin Starcross 5 tires would help get that big-bore power to the ground, while the Michelin bib mousse foam inserts would eliminate the chances of getting a flat on the trail.
Acerbis was a big part of the overall look of our KDX500 build, with a complete plastics kit, handguards and oversized tank with much-needed additional fuel capacity. Other items on the build include ODI handlebars, lock-on grips, SDG gripper seat cover, Devol performance link, Fly Racing drive components, Bolt hardware, Works Connection skid plate and Raptor titanium pegs.

We will be the first to admit that if KTM or Kawasaki made this motorcycle, our cash deposit would be placed the instant it was announced. The WPS KDX500 is so much fun to ride—yes, it’s a bit of a handful on tight trails and obviously takes more effort to start than just pushing a button like most modern off-road bikes, but, man, is it a blast to ride! The KX500 engine has tons of power everywhere, and the KTM chassis handles great off-road. The crew at PWR set the suspension up for Western Powersports’ VIP Pete Treadwell, so it’s a bit on the stiff side for the average human but works great. Now we might be a little bias at the moment because the KDX500 is sitting in our garage, but this hybrid machine is one of the best-performing and -looking KX500 two-stroke frame conversions we have been able to test. The steel-framed mafia gets one for the win column. Maybe it’s time for an aluminum-framed KX500 project? Stay tuned!