KAWASAKI IS RETURNING TO BAJA 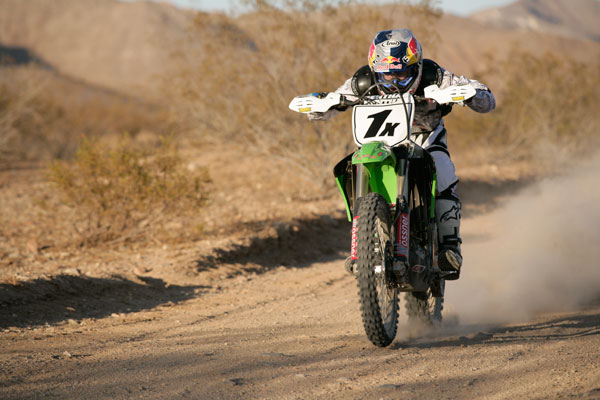 Sporting the number 1x on a well-equipped Kawasaki KX450F, we happened upon a Precision Concepts backed Baja machine during testing in the California desert. Riding the bike was Robby Bell and long time Honda rider (semi-retired for the last 2-years) Steve Hengeveld. The machine was built by Bob Bell (who spent many years working with Team Honda and their Baja effort) the owner of Precision Concepts.  While the details are getting worked out it appears that there will be some factory backing, Robby Bell happens to be the rider of record and holds the 1x number, Steve Hengeveld is totally on board and word has it that Destry Abbott will be a part of the team. Bruce Penhall (former world Speedway champion) will be a major sponsor and we understand that his son will make up the fourth member of the squad.

Team Kawasaki pulled out of Baja racing in 1996, and Honda has owned the event ever since. With the green machine getting back into Baja competition it will give the venue some much-needed voltage.

Hengeveld pounds the Precision Concepts  KXF testing the suspension. He was totally pumped with the machine!

While it’s still early in the testing, Bob Bell GPSed the top speed at 96mph. They’re having a special larger countershaft sprocket made that’s one tooth larger for additional top end.

Sidi boots is now accepting rider resumes for the 2010 season!