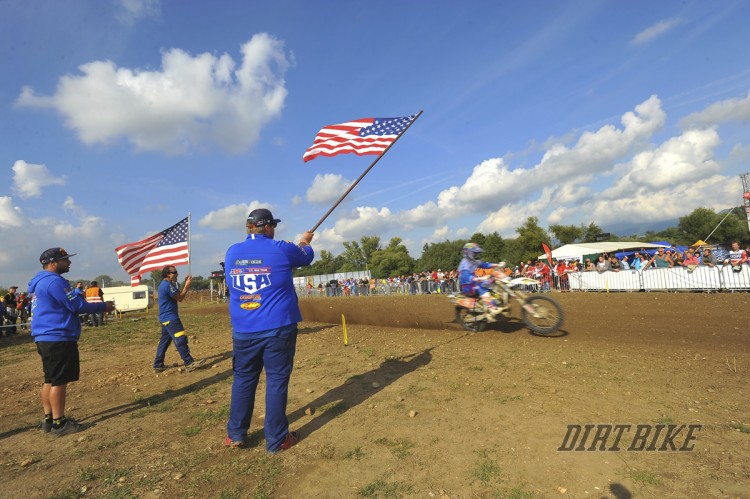 France now a four-time winner; Sipes fastest of them all. France won the FIM World Trophy for the fourth straight time, Australia walked off the podium in protest and Ryan Sipes became the first American to not only win E2 but top the overall individual standings as the 90th International Six Days Enduro in Kosice,Slovakia, drew to a close.

To understand, first let’s go back to Day 3 when eight different riders on the World Trophy teams of five different countries were “excluded” or disqualified for
missing an observation check. Australia was not one of those countries and it assumed control of the race in that most hotly contested category. After getting a number of complaints, however, the FIM jury decided that the DQed racers could continue to ride, though their scores would not count in their team’s total pending a final decision by the FIM jury. Late yesterday, word came down from the FIM jury that the affected riders’ scores would now count and count retroactively. That made France a player and to its credit, its riders responded by besting the Aussie test times and whittling away the lead until suddenly, yesterday afternoon, France had the lead by just over two minutes. Australia knew it’d be almost impossible to rally back enough time in just the final motocross tests of Day 6 to overcome that, but its six riders tried valiantly and cut that deficit in half to one minute. But that was still enough for France to win for the fourth time in a row.
Therefore, the miffed Aussies decided to walk onto the stage during the post-race awards ceremony, stand on the top step of the podium for a momentary celebration of what could’ve been and then exit stage right in protest of the FIM jury decision more than to snub the other teams. As for U.S. fortunes, you’re not going to do well missing four riders on your World Trophy team so the Americans—the leaders after Day 1 for the first time in history—were destined to remain at the back of the pack.
There was, however, one extremely positive result for Team USA and that was the performance of Ryan Sipes who’d been the fastest overall individual in the entire field since Day 2. Would he be able to clinch that honor, becoming the first American to do so?
It all came down to the final E2 motocross test today and Sipes responded brilliantly. “The 350 starting against the 450s, I knew it was going to be crucial, the start,” he said. “I mean, if I didn’t get the start, to be careful in the first turn because these guys aren’t used to a [start] like that—most of them, anyway. (The first turn was an uphill, slightly off-camber affair.) “You never know what’s going to happen, and it ended up working out well. I didn’t get a great jump, but I cut under everybody. “I had an ‘oh no!’ moment going into the first turn. I hit a bump and my hand came off the bars, but I pulled that back together and got in the lead. Then it was just ride as good as I had to to stay out front.“It’s an unbelievable feeling.”

While things didn’t go Australia’s way in World Trophy, it still hung on to take both the Junior World Trophy and Women’s World Trophy titles. In the Junior division,Australia ended up with a healthy 15 and a half minutes over Sweden; third-place Italywas even farther back. And as in the senior World rankings, losing two riders cost theU.S. big, though its survivors—Grant and the injured Steward Baylor—put in superbrides nonetheless. Grant ended up eighth in the final E2 standings with Steward 24th,an amazing feat considering he rode most of the week with a separated shoulder!For the Women’s World Trophy, there was only one word: Australia. Its threewomen absolutely owned the week and spanked France by more than 55 minutes withSweden an hour and 11 minutes behind. The U.S. team of Rachel Gutish, Mandi Mastinand Jamie Wells ended up holding fifth to the end.
Club team riders make up the bulk of the field at Six Days, which means somegreat battles and more of them. Team USA’s GoFasters.com (Reid Brown, NateFerderer and Brian Garrahan) held onto fourth place for the week. Ferderer capped offhis Six Days by winning the C3 final moto and Garrahan did him one better; eventhough he was fourth in C2, his time was fastest of all American Club riders.The other American Club teams finished 12th (Boise Rider Riders with KaleElworthy, Skyler Howes and A.J. Lehr), 13th (Missouri Mudders with Ryan Kudla, KyleMcDonal and Mike Pillar), 15th (Elizabeth Scott with Jason Densley, Fred Hoess andBrian Storrie), 22nd (Eric Cleveland with Jubal Brown, Geoffrey Sanders and DillonSheppard) and 29th (Tony Agonis with Ben Kelley, John Kelley and Josh Toth).