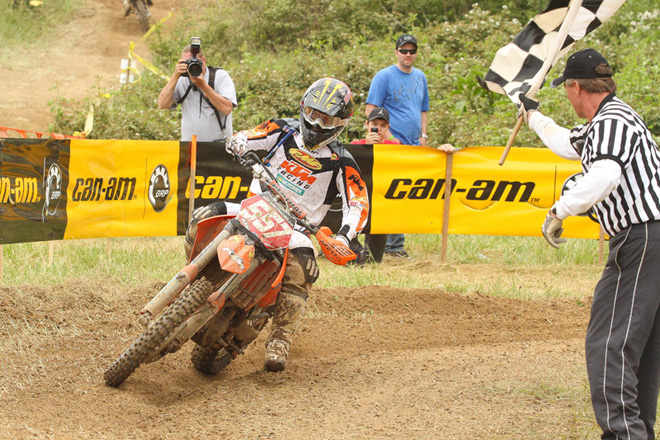 Kailub Russell recorded his fourth win of the 2012 Can-Am Grand National Cross Country Series at the Limestone 100 in Springville, Indiana, May 13. The win puts the FMF/KTM rider in a tied with Paul Whibley for the overall championship.
Whibley, on the FMF/Am Pro Yamaha, got out to a fast start but gave way to FMF/KTM’s Charlie Mullins, who was hoping to grab his first win of the season, but mechanical troubles would eventually force the defending champ into the pits for a lengthy repair.
Russell came from behind and took the lead from Whibley on the fourth lap, but XC2 Pro Lites rider Andrew DeLong, on the F.A.R. Husqvarna, was coming on strong and was threatening Russell for the overall lead on adjusted time. But Russell held on to take the overall win 14 seconds ahead of DeLong on adjusted time.
Third overall and second in XC1 ended up going to Whibley who finished out the race 28 seconds behind DeLong.
FMF/Am Pro Yamaha’s Jordan Ashburn and Shenandoah Honda/Offroadchampion’s Thad DuVall battled all day long, and DuVall looked to have broken free from Ashburn and grabbed third place in the XC1 class, but he was assessed a penalty for a course-cutting infraction and was awarded fourth in class and fifth overall. Ashburn joined Russell and Whibley on the XC1 podium in third (fourth overall).
Sixth overall and fifth XC1 went to Yamaha rider Chris Bach, followed by New Zealand’s Rory Mead (KTM).
Runner-up in the XC2 Pro Lites class was KTM rider Jason Thomas at eighth overall, and third in the XC2 Pro Lites class and ninth overall was Yamaha rider Jedediah Haines. It was Haines’ first podium finish.
Rounding out the top 10 overall was seventh XC1 rider Takeshi Koikeda (KTM).
Steward Baylor Jr. saw his perfect season come to an end. Mechanical problems coupled with a crash relegated him to 36th overall, but he still enjoys a comfortable points lead over Thomas, 161-118.
DeLong, who missed the first two rounds with an injury, is currently sixth in points.
Kawasaki rider Adam Bonneur was the top Amateur finisher at 15th overall, and Masters A winner Jeff Fredette was the overall winner of the morning race.

INSIDE THE HARE AND HOUND FACTORY BIKES