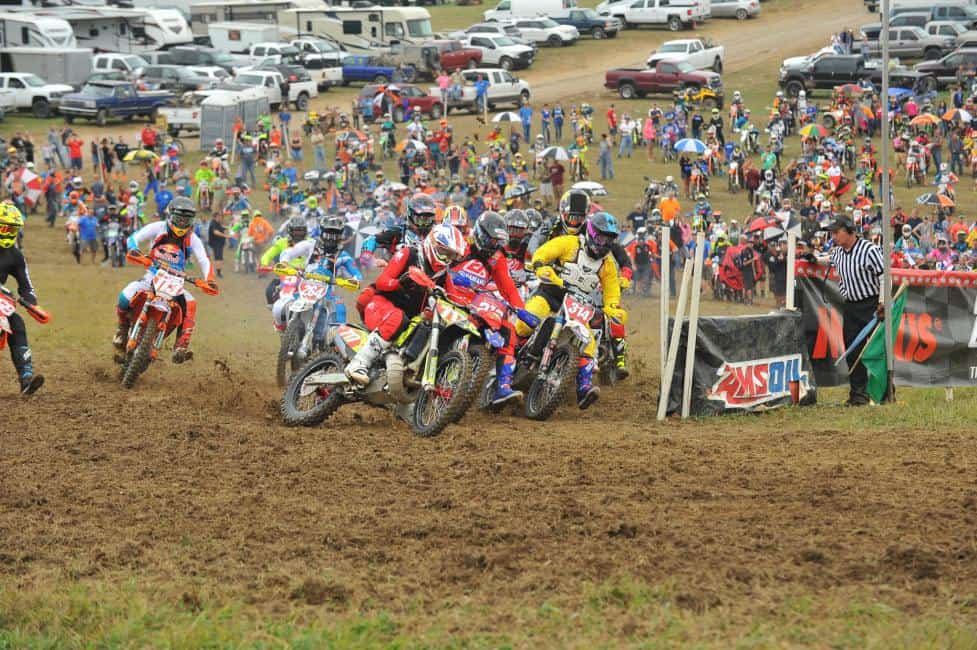 ST. CLAIRSVILLE, O.H. (October 8, 2017) – The penultimate round of the 2017 AMSOIL Grand National Cross Country (GNCC) Series presented by Maxxis, an AMA National Championship, traveled to St. Clairsville, Ohio this weekend for the 17th Annual Polaris Ace Powerline Park GNCC. As the pros lined up for the start of the 1 p.m. race, rain began sprinkling the already muddy track making for one of the worst mud races of the year. 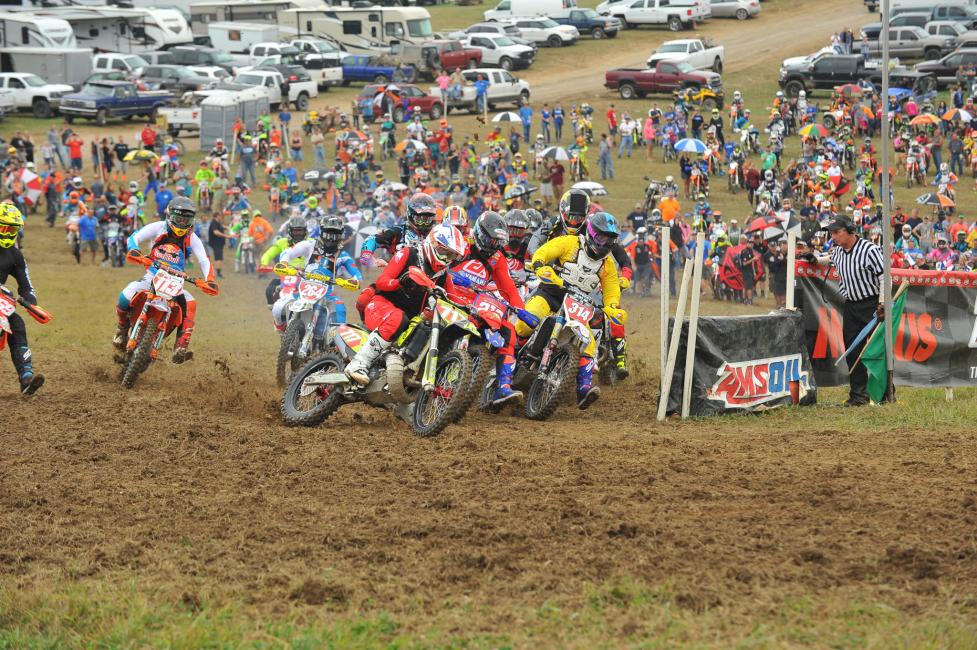 Grant Baylor shot off the line to win the $250 All Balls Racing Holeshot Award.

Baylor cruised through timing and scoring on the first lap still in the lead, while Strang went from second to fourth just one turn before the checkpoint, allowing for Russell to move into the runner-up position with Ashburn behind him in third. 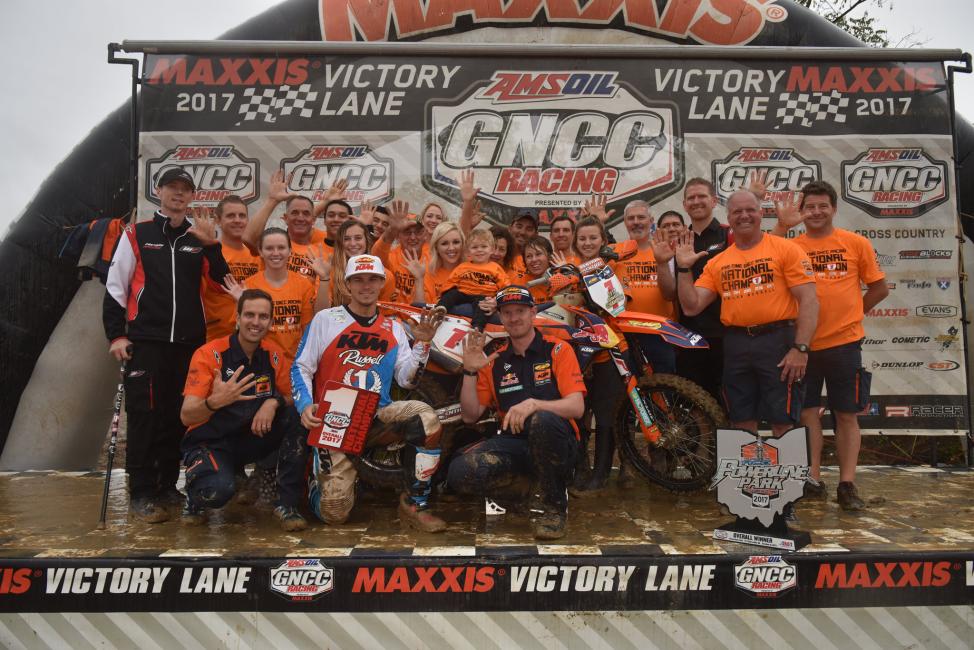 Russell made the pass for the lead after Baylor took a bad line and got stuck. Ashburn capitalized on Baylor’s misfortune and also got by him for second. As they came out of the woods in a field section, Strang was back into third.

Another lead change occurred when Russell hit a log and went down, allowing for Ashburn to slide by. The crash caused Russell’s front fender to fall off creating another added obstacle to the already treacherous track. Russell got back past Ashburn and then Ashburn had more trouble at the creek jump where he went over the bars and couldn’t get his bike unstuck. Strang used this to his advantage and once again found himself in second. 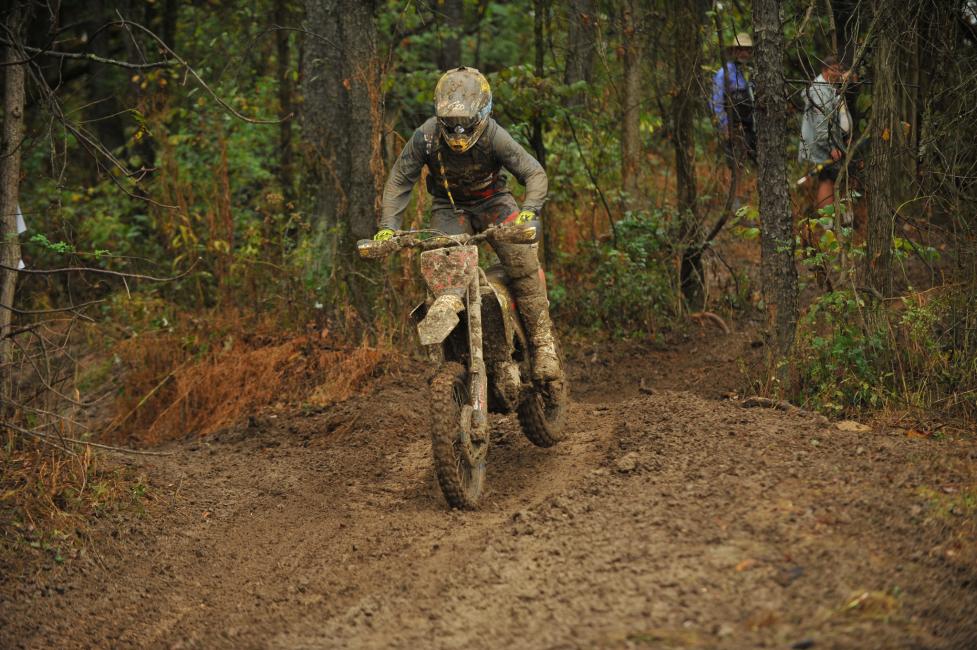 Josh Strang had an excellent day in the muddy conditions, making a podium appearance in second.

N-Fab/AmPro Yamaha’s Ricky Russell had worked his way into third, but also had issues at the creek jump allowing Baylor to move back up to third. Russell seemingly ran his own race up front fenderless and came to the finish 1:13.500 ahead of Strang who had one of his best rides of the season in second. Russell’s win was enough for him to wrap-up his fifth-straight title in addition to tying Scott Summers on the all-time win list.

“Today was a good day, it looked like it was going to be really awesome this afternoon before it started raining and got slick,” said Russell. “I made a dumb mistake and fell over and broke my front fender off, and then I was just roosting myself out. But yeah, it’s been a great a year and I’m happy to get number five and tie the all-time win record today.” 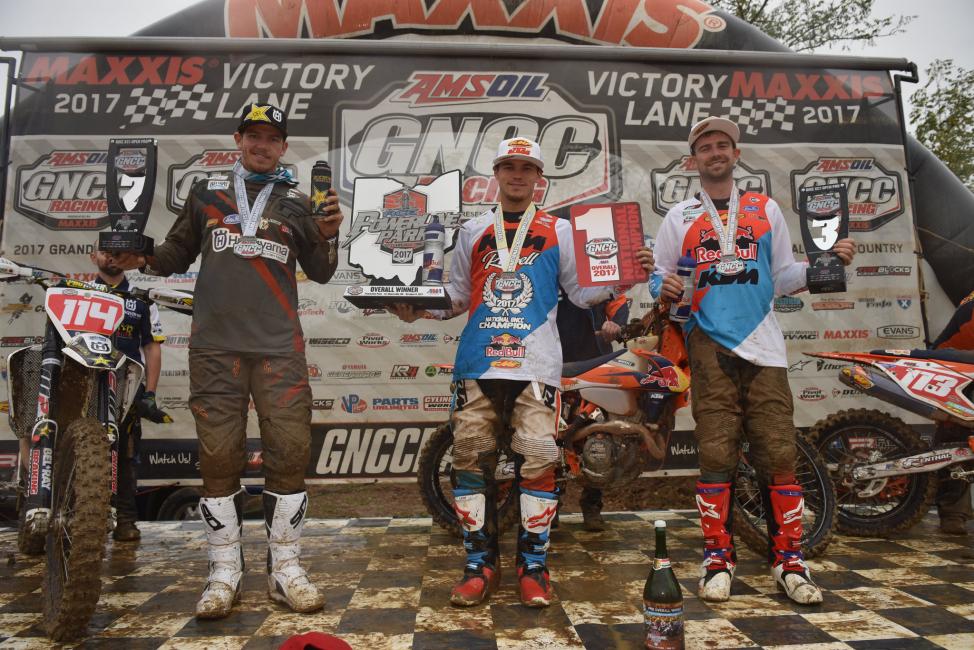 Meanwhile, FMF/KTM Factory Racing’s Russell Bobbitt was continually pushing through the pack and was in fourth when the two-lap card came out. Baylor looked to be in a good position for the podium until taking a bad line through the creek jump just one mile before the finish. Bobbitt took the main line and made the pass on Baylor to land his first ever podium finish in third.

Baylor followed in fourth, with R Russell in sixth overall. Jonathan Girroir rebounded from two different crashes on the first lap to have his best finish to date with ninth overall. 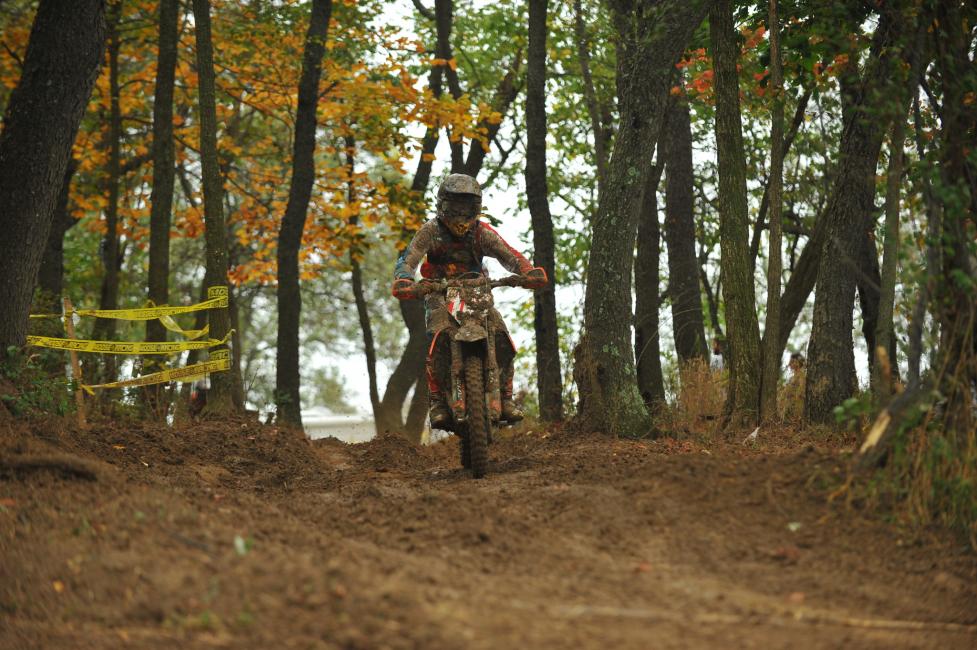 Russell Bobbitt made the pass for third on the last mile of the race.

When the green flag waved for the second row, RPM/KTM’s Mike Witkowski grabbed $100 Hot Cams XC2 250 Pro Holeshot Award, but Coastal Racing/Husqvarna’s Layne Michael quickly took the lead. Michael led majority of the race in an overall podium position until having a small tip over just before the white flag came out.

Michael’s teammate, Craig Delong, was right there to make the pass and continued leading until the checkered flag flew – claiming his first win of the season. Michael and N-Fab/AmPro Yamaha’s Josh Toth finished second and third. Trail Jesters/KTM Racing’s Ben Kelley and Witkowski rounded out the top-five in the XC2 250 Pro division. 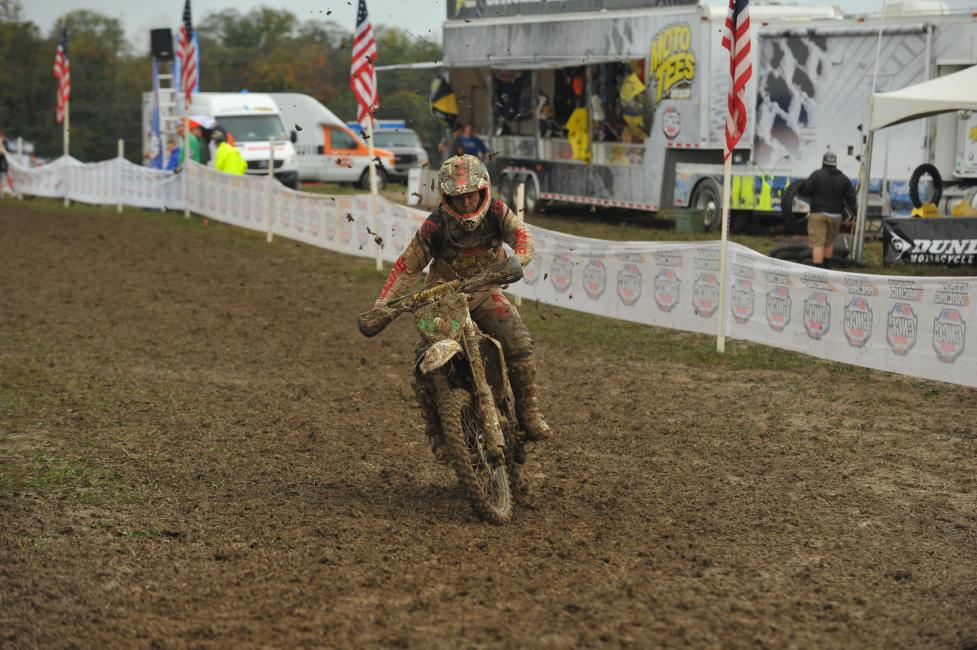 Craig Delong secured his first XC2 250 Pro win of the season in Ohio. 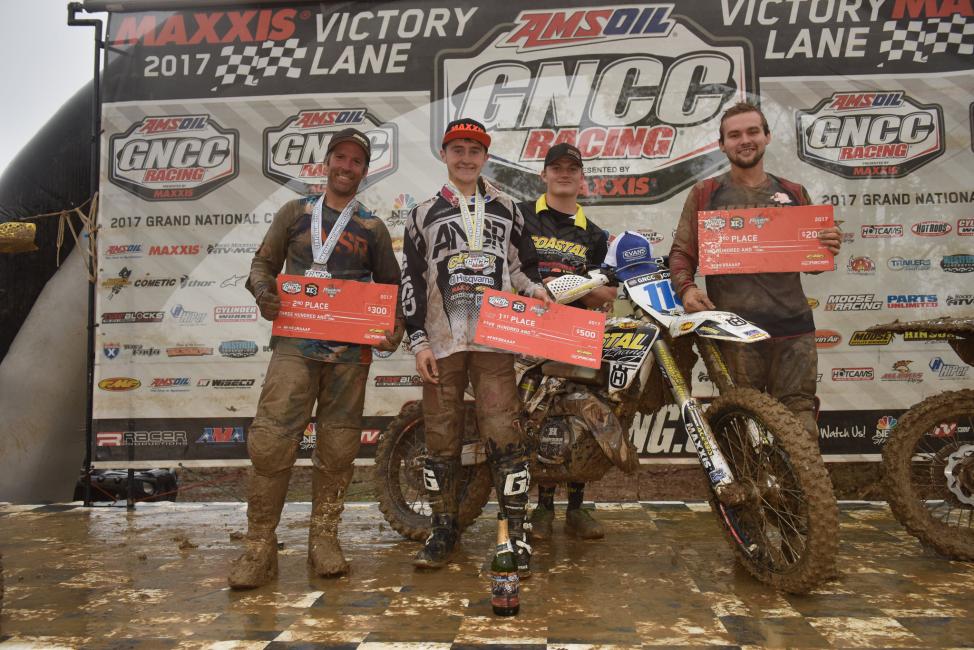 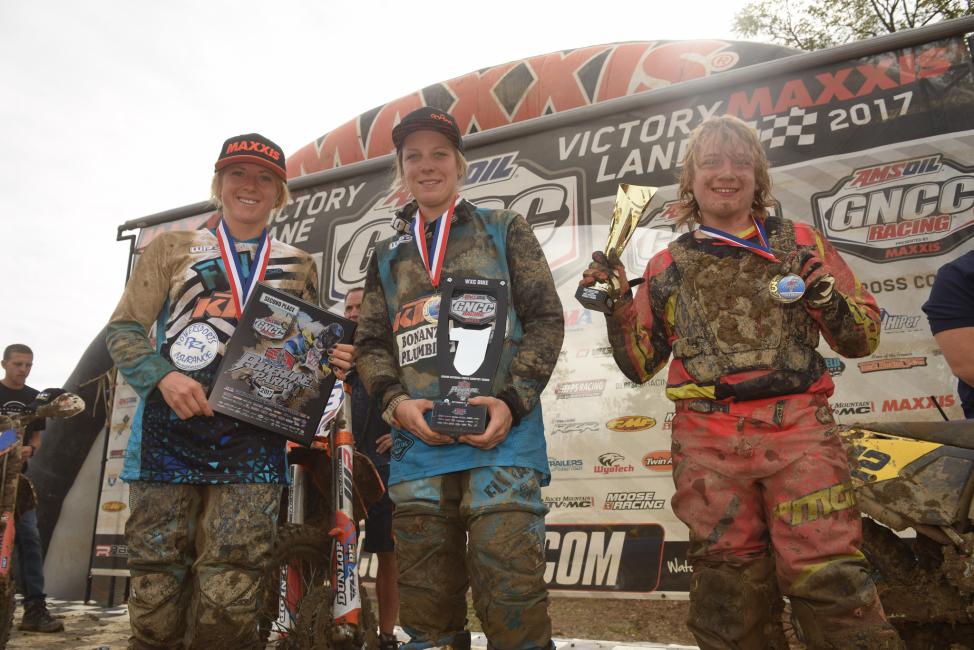 The 8 a.m. youth race kicked off the day with some exciting race action where each lap had a different leader. At the end of the race it was Mack Riemer standing in the middle of the box claiming his first win of the season. Max Fernandez and Shawn Myers rounded out the overall podium. Zack Davidson missed the podium, but his sixth overall finish allowed him to secure the overall youth championship.

The 1 p.m. pro bike race was broadcast LIVE in its entirety on RacerTV.com and can be viewed as archived video online by visiting the GNCC LIVE page. A highlight show featuring the event will air on NBC Sports Network on Saturday, December 2 at 12:30 p.m. 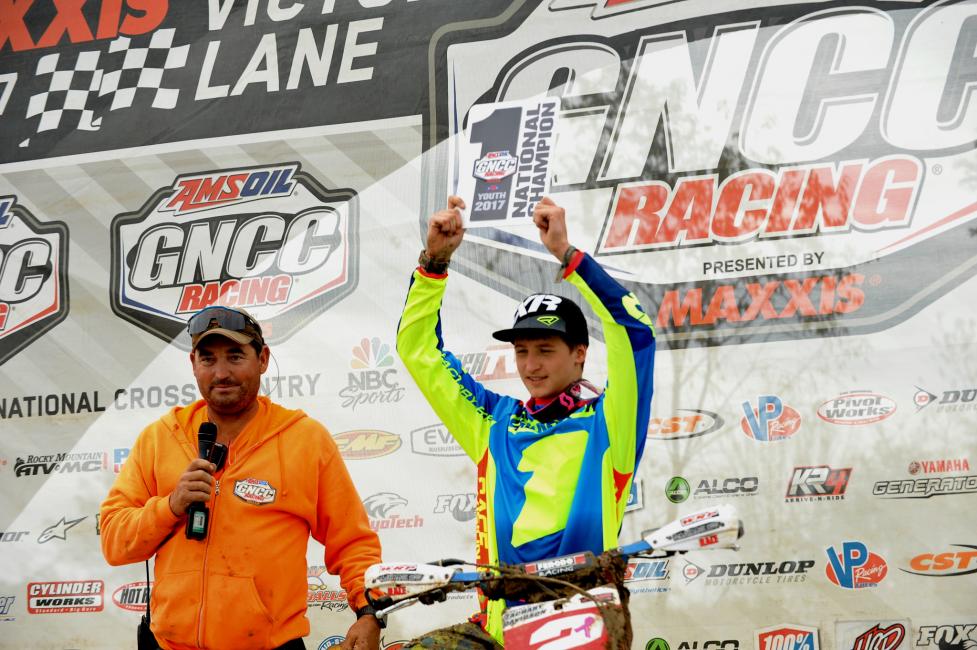 The 2017 AMSOIL Grand National Cross Country Series concludes in three weeks with the popular AMSOIL Ironman GNCC in Crawfordsville, Indiana on October 28 and 29. After setting the record for the largest attended GNCC last year, the Ironman GNCC is a can’t miss event!