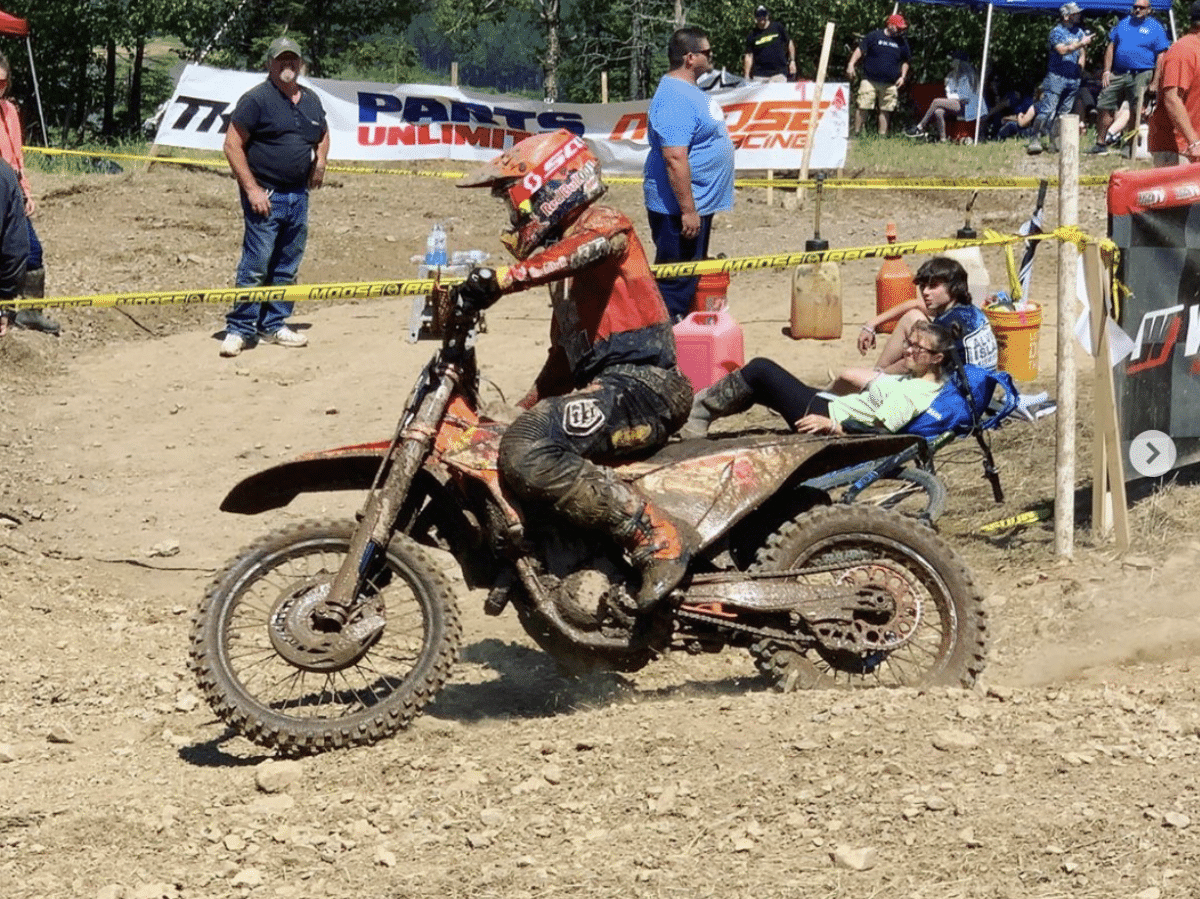 The 2019 AMSOIL Grand National Cross Country (GNCC) Series presented by Specialized, an AMA National Championship, continued on Sunday, June 23 atop Snowshoe Mountain Resort in Snowshoe, West Virginia for the eighth round of the season.

After a hard-fought battle throughout the duration of the race, FMF/KTM Factory Racing’s Kailub Russell would cross the finish line 1.4 seconds ahead of second place to clinch his sixth AMSOIL Snowshoe GNCC win. Russell ran in the second place position for majority of the day, but would make the pass for the lead while out on the fourth lap. As they headed out on the last lap, Russell would manage to hold onto his lead until the checkered flag waved.

Tely Energy Racing/KTM’s Steward Baylor Jr. was applying the pressure to Russell this weekend. Baylor would come through fifth on the opening lap, but as the race wore on and the 2-lap card came out he would find himself in the lead position. When the white flag came out Russell came through first with Baylor 1.7 seconds behind him and pushing. Baylor would try to put a last lap charge on Russell, but would fall a second short coming through in second.

Starting on row one this round was XC2 250 Pro points leader, Trail Jesters KTM’s Ben Kelley. Kelley would put in a great ride, but without any time adjustments he would not be able to put much pressure on the top two competitors. Kelley earned his second-straight third overall finish, and secured his eighth-straight XC2 250 Pro class win.

AmPro Yamaha/Moose Racing/Parts Unlimited-backed rider Ricky Russell started from the third row, however when the pack of riders came around on the opening lap Russell was leading the way. Russell would physically lose the lead after the first lap, but would remain first due to adjusted time. As the two lap card came out, Russell would find himself losing time and ultimately falling back to third in the XC1 class, fourth overall. As the checkered flag came out, Russell would hold onto his first podium finish of the year.

Earning fourth in XC1 Open Pro was Babbitt’s Online/Monster Energy/Kawasaki’s Jordan Ashburn. After suffering from mechanical issues at the past two events, Ashburn was able to power his Kawasaki motorcycle to the front of the pack this past weekend. Although unable to catch the top three competitors, Ashburn was battling throughout the race to keep his consistent day and take the checkered flag fourth in class and fifth overall.

Tely Energy Racing/KTM’s Grant Baylor earned fifth in the XC1 class at Snowshoe, which is his best finish since returning at the X-Factor GNCC. Baylor worked his way from a seventh place start up to fifth on the fourth lap. Baylor was able to hold onto that fifth place position all the way until the finish.

Husqvarna/FXR/Thornhill Automotive’s Cory Buttrick held the sixth place XC1 position for majority of the day and would make a last lap pass after falling back to seventh to hold onto second-straight sixth place finish of the season. Phoenix Honda Racing’s Andrew Delong worked his way up from an eighth place start to grab seventh in XC1 on the mountain. Babbitt’s Online/Monster Energy/Kawasaki’s Josh Strang came through eighth in class after a hard-fought day in the West Virginia mountains.

Unfortunately for Rockstar Energy/Factory Husqvarna Racing’s Thad Duvall his day would end after three laps of racing. A mechanical issue while out on the fourth lap put Duvall in the ninth and final XC1 place position. Duvall’s team worked hard to try and get his motorcycle back in running order, but a puncture to his radiator was found to be the cause. Duvall leaves Snowshoe healthy, and still second in the points standings.

Duvall’s teammate Trevor Bollinger was absent from the starting line as the race day got underway. In the team race report it is said that he was unable to line up due to an unforeseen illness.

Coming through second in the XC2 250 Pro class was Coastal Racing/Husqvarna’s Craig Delong. Delong would put in a consistent ride at Snowshoe, and manage to finish seventh overall on the day. Tely Energy Racing/KTM’s Liam Draper earned his first XC2 podium finish this past weekend. This is Draper’s best class and overall finish thus far in the season, coming through eighth overall.

In the FMF XC3 125 Pro-Am class, Beta USA Factory Racing’s Cody Barnes earned his fourth win of the season. Barnes currently leads the points standings by 13 as the season heads to the ninth round in Pennsylvania. Trail Jesters KTM’s Jesse Ansley came away with second after a brutal race. Lojak Cycle Sales’ Chase Colville came away with his second XC3 class podium, finishing third on the day.

The AMSOIL Snowshoe Top Amateur honors went to 250 A competitor, Ben Higgins after coming through 15th overall. Trail Jesters KTM/FMF/Edelmann Sales’ Simon Johnson came away second in the 250 A class, and finished 20th overall. Taking third on the top amateur podium was Open A rider, Levi Keller with a 23rd overall finish position.

As the 10 a.m. racers took off into the mountains of Snowshoe, it was AmPro Yamaha’s Rachael Archer grabbing the early lead from Fly/Maxxis/Pro Circuit/KTM’s  Becca Sheets. However, after getting herself caught up in the bottleneck, Archer would find herself in second when Sheets was able to capitalize and take over the lead. Sheets would fight all the way to the finish earning her third win of the season and taking over the WXC points lead. Archer would earn second in the WXZC class and currently sits fourth in the championship standings. KTM/MEPMX/Fly Racing’s Mackenzie Tricker held on for third in the WXC class. Rockstar/Husqvarna/Moose Racing/Shaw Wines’ Tayla Jones did not compete at Snowshoe due to a hand injury.

The 8 a.m. youth race saw Joseph Cunningham take his eighth consecutive win of the season. However, it was an all-out battle on the mountain as Canon Kuneff had the early lead ahead of Cunningham. Kuneff would hold on to earn second overall followed by Lane Whitmer taking third in the YXC1 Super Mini Sr class. Brayden Nolette would unfortunately fall back to eighth in his class. YXC2 competitor, Grant Davis earned third overall in the youth division, while also earning his seventh class win of the season.

The Snowshoe AMSOIL Moto Hero was award to Buckhannon, West Virginia’s Joe Gower. Gower has been involved with the United States Army, West Virginia Army National Guard and Federal Bureau of Investigation. He has worked as an infantryman in the 82nd Airborne Division; SOT-A team, 2/19th Special Forces Group and is currently an analyst for the FBI. He was deployed to the Republic of Korea, Egypt, Kuwait and Iraq. Gower was nominated by his wife Stephanie and will receive a $250 AMSOIL gift certificate and a FREE set of Greenball’s premium light truck Kanati brand tires valued over $1,000 from our friends at AMSOIL and GBC Tires.