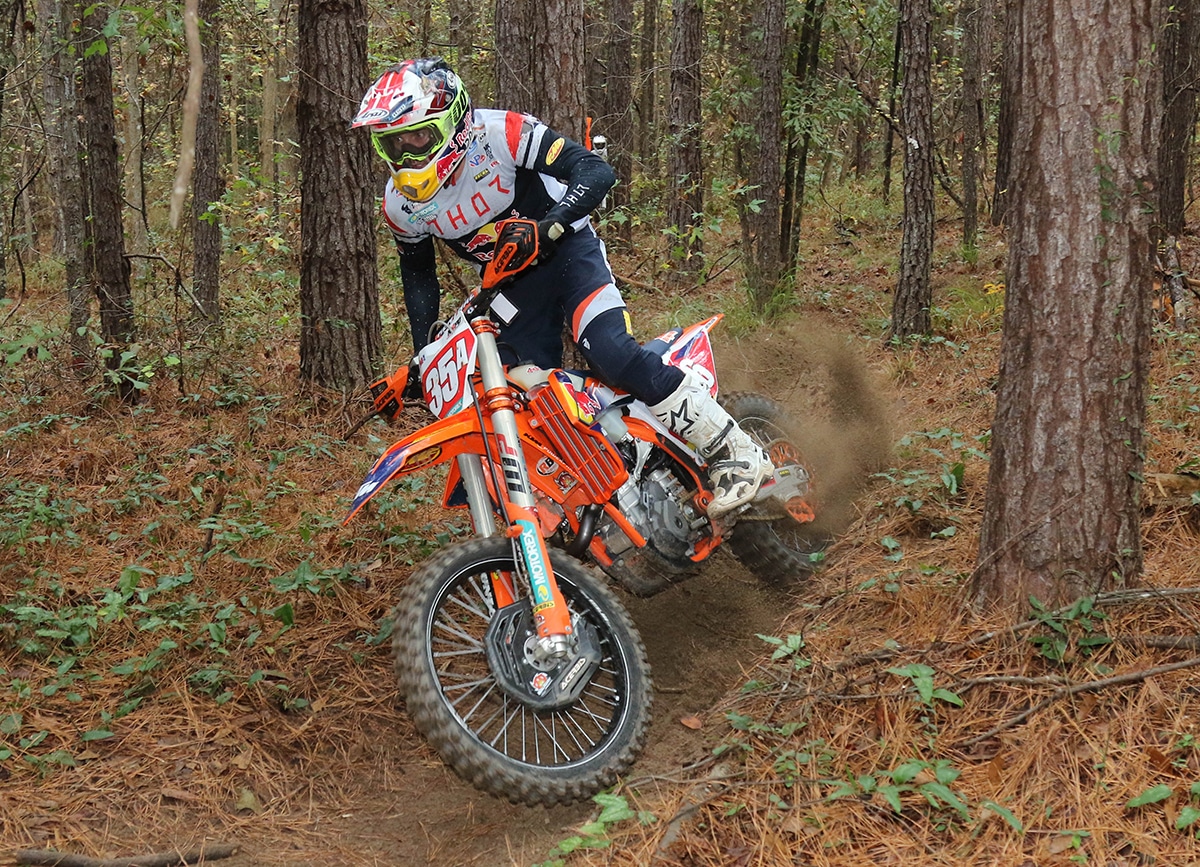 Enduro Engineering put up an $8000 Bounty for anyone who could win all six tests at this weekend’s Gobbler Getter National Enduro in Stanton, Alabama, a culmination of a year’s long “Bounty” program that was not collected on until the final round of the series. FMF/KTM’s Josh Toth was up to the task, and swept all six tests, dominating the race and collecting eight large.

Though REV Motorsports’ Grant Baylor had already clinched the Kenda AMA National Championship at the previous round in Oklahoma, there was still plenty left to be decided at the finale in Alabama, including the Women’s Elite title, the Futures class championship, and the Beta Cup Champion, which goes to the Beta rider that accumulates the most points in any class, along with other amateur class championships still to be determined.

Toth’s win was his first of the season and it came at just the right time.

“I’m super stoked and proud of my effort,” said Toth. “I knew the bounty had built up going into this last round so I came out swinging. I knew if I won that first test, I’d be the only one eligible. So, I put the pressure on myself all day from there. I just rode like I stole the bike. Just pinned it. I had a couple close calls, but overall, a good day.”

Coastal Racing GasGas’ Ricky Russell finished on a high note as well, claiming his best-ever national enduro finish by taking the runner-up spot after posting the second-fastest time in the final four tests.

Craig DeLong started fast, finishing second in tests one and two, before settling into third at the finish.

“I didn’t feel like I rode that great, but I was second in the first couple of tests and Toth was kind of on his own level today,” said DeLong. “I just kind of tried to ride the same all day. In the second test, I was close to Josh, but in the third test, I kind of fell back. I struggled the third and fourth tests. Just needed to ride a little more aggressive. I was consistent and didn’t hit the ground once. But a podium, I’m happy with that.”

The Women’s Elite class championship came down to the final race in Alabama after AmPro Yamaha’s Rachel Archer topped Enduro Engineering/Fly Racing KTM’s Mackenzie Tricker by less than a second at the previous round in Oklahoma, leaving the two in a situation where whichever one took the win in Alabama would be the series champ. Archer won the first test by five seconds. However, Tricker won the remaining four tests to take the win and the title.

Scott Boyer, meanwhile, won the Beta Cup Championship with a second place finish in the 45 A class behind Matt Stavish and took home a brand new Beta from Beta USA for his efforts.