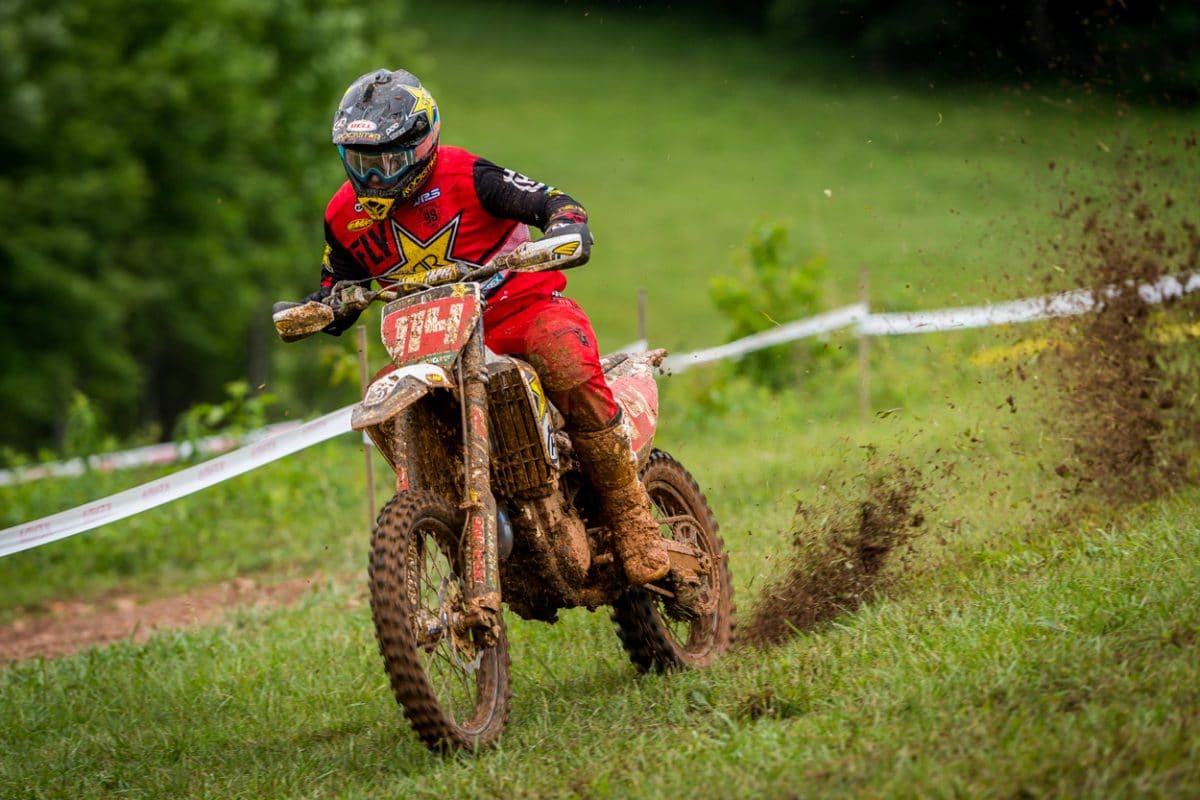 Not long after his 2016 victory, Strang suffered a foot injury during ISDE competition, which was a major setback for him. For just over a year now, Strang has worked hard to regain the speed that once carried him to the 2010 GNCC title.

“I feel like I’ve been getting a little faster with each race, but I got off on the wrong foot this weekend and I wasn’t sure I could recover,” said Strang. “I crashed in the first test on Saturday and lost a lot of time, so I was riding from behind right from the get-go. I just kept grinding away at it and I was able to make up some time and finish second for the day.”

On Sunday, Strang was consitently in the top three throughout the six tests and he won test five outright – a Cross test, which ruined Ryan Sipes’ undefeated status in 2018 Cross tests.

After 12 tests and two days of racing, Strang took the overall win by 17 seconds over Layne Micheal. After the race, Strang revealed that he has changed a few things with his technique.

“I’ve been working on a few things since the last race,” said Strang. “One of them was not using my rear brake as much. At the last race I think I needed five sets of rear brake pads and a complete brake line, and this weekend I didn’t even change pads. So I’m trying to stay off the brakes as much as I can and I think that made a big difference.”

With the win, Strang moved ahead of Grant Baylor and into third overall in the series standings.

Relentless rain on the days leading up to the race, and during Saturday’s event, left the Lake Sugar Tree course in less than desirable condition. However, the Full Gas track crew did a fantastic job of prepping the course and by the end of the weekend, and after the sun came out on Sunday, most of the riders agreed that the course was epic.

Layne Michael struggled with the muddy conditions on Saturday, but came on strong during Sunday’s event with the track tacking up. The KR4 Husqvarna rider scored two test wins on Sunday to finish just behind Strang in the runner-up slot.

The Enduro test was Michael’s strong suit and that’s where both of his wins came, although he was third in the final Cross test behind Steward Baylor and Ryan Sipes.

“Overall, I’m really happy with my result,” added Michael. “It’s progress for me; I’ve been struggling a little bit this year with comfort and consistency. I feel like today I was able to really find my groove.”

Ryan Sipes rounded out the podium 22 seconds behind Michael. The Rockstar/Leatt/Maxxis Husqvarna rider won five of the six Cross tests over the weekend, but struggled in the Enduro tests.

“I’m surprised to finish third considering how I rode this weekend,” said Sipes. “I had a few falls in the Enduro test, but even when I didn’t fall I was just off the pace. I’ve been traveling a lot lately and racing a lot of different kinds of races and I haven’t ridden in the woods in about a month, and it really showed when I got in the Enduro test.”

Despite the finish, Sipes still leads the overall series standings by 11 points over Steward Baylor.

Fourth overall went to Grant Baylor, who battled for the lead on Saturday, however, the Tely Eenergy KTM rider struggled to stay on two wheels on Sunday.

“I was second in the first three tests on Saturday, so I was leading the race at that point,” said Grant. “After that, things went downhill. I crashed three times in the fourth test, and over the weekend I think I crashed seven or eight times.”

Despite the crashes, Grant was just eight seconds away from a podium finish behind Sipes.

Jordan Ashburn kicked off the weekend by winning the opening test on Saturday, an Enduro test. The Beta USA rider was sitting third behind Evan Smith and Josh Strang at the end of the day. Sunday was a tough day for the Tennessee rider, however, and he settled for fifth overall at the end of two days of racing.

“It was pretty muddy when we started on Saturday and I was able to win that first test, which put me in good shape,” said Ashburn. “I felt really comfortable in that first test but it ended up being shortened because of the conditions, and I think that took away my advantage, so I was trying to make up for that in the Cross test and it just didn’t happen.”

The Kenda Full Gas Sprint Enduro Series resumes action with round 4 of its series in Wellston, Ohio, on June 16-17. For more information go to www.sprintenduro.com.