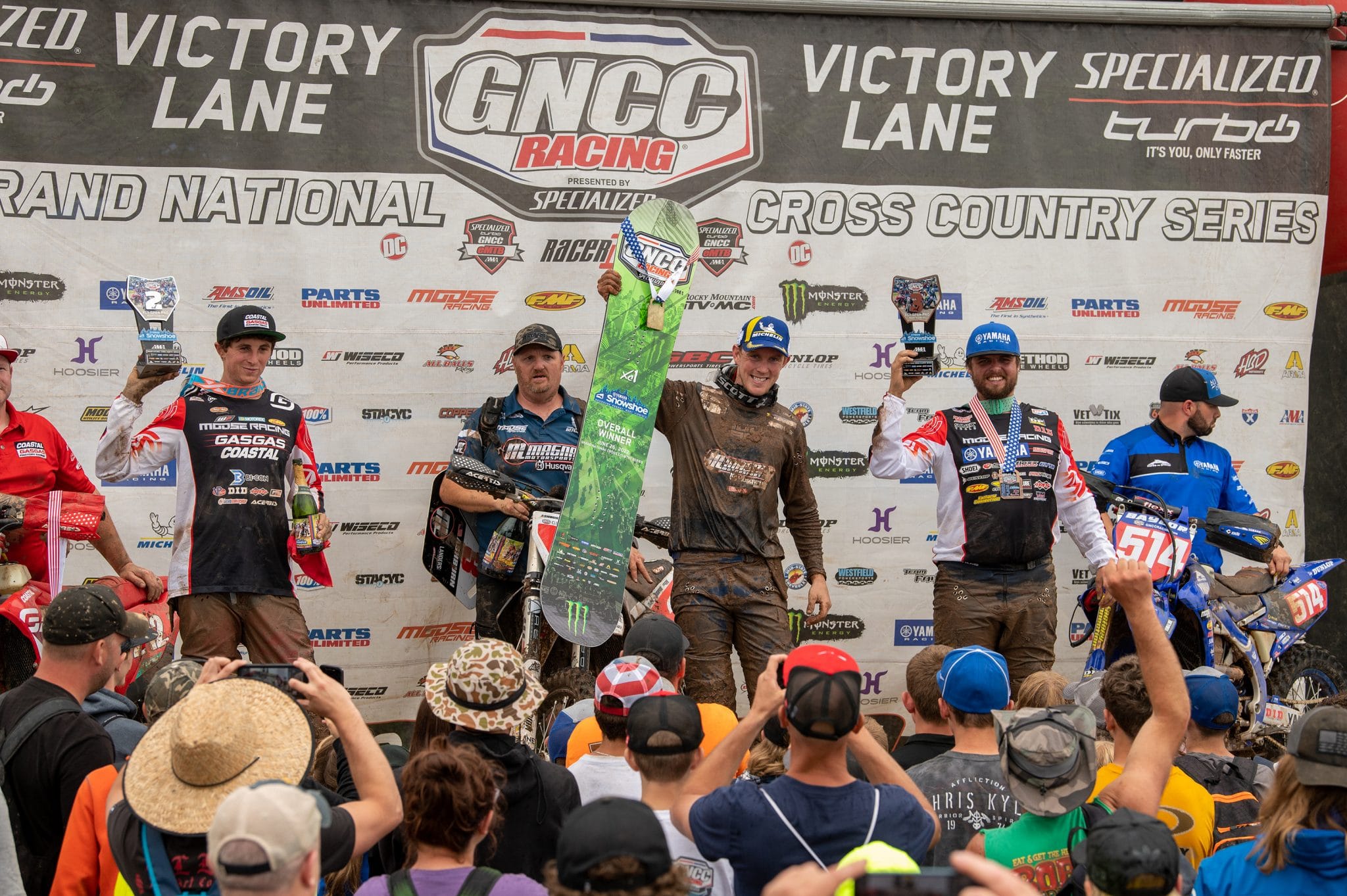 The Grand National Cross Country (GNCC) Series presented by Specialized, an AMA National Championship, concluded round nine of racing, Yamaha Racing Snowshoe GNCC, on Sunday, June 26. The flood gates seemed to open up during the mid-morning hours, and the rain continued to fall until the start of the afternoon Pro race.

The muddy conditions made for a challenging day of racing as Coastal GASGAS Factory Racing’s Ricky Russell got out front early on in the race, leading the first couple of laps atop Snowshoe Mountain. He would soon be challenged by FMF/KTM Factory Racing’s Josh Toth as he made the pass on Russell for the lead. However, after leading two laps, Toth would have to make the decision to return to his pits for a tire change.

Russell would move back into the lead with just one lap remaining, but Magna1 Motorsports/Husqvarna’s Jordan Ashburn was continuing to make his way up through the pack after a fifth place start to the day. Ashburn would move into second with one lap remaining and set his sights on Russell. As the battle heated up, Ashburn and Russell would come together while trying to get up a hill. Ashburn would get his machine going first, putting him into the number one spot.

Returning from injury was Coastal GASGAS Factory Racing’s Johnny Girroir who battled for the duration of the race to earn third overall on the day, while also earning the XC2 250 Pro class win at his first race back. AmPro Yamaha’s Steward Baylor also returned to racing after suffering an injury at round one this season. Baylor would push himself throughout the race to earn third in XC1 and fourth overall on the day.

Rockstar Energy Husqvarna Factory Racing’s Craig DeLong had a good day at round nine after running at the front of the pack for the first half of the race. DeLong would make a couple mistakes that cost him some positions but would put his head down and push for the last couple of laps. DeLong would come through to earn fourth in XC1, and fifth overall on the day.

Coming through to round out the top five in XC1 was Rev Motorsports/GASGAS Racing’s Grant Baylor. As the race got underway Baylor would have a consistent run coming from sixth place.

Coming through to round out the XC2 class top three were Phoenix Racing’s Ruy Barbosa and his teammate Cody Barnes who finished seventh and eighth overall on the day as well. Barbosa and Barnes would battle until the checkered flag for those positions, and they continue to improve each round of the season.

After not even being sure that he was going to be able to race this weekend, Rockstar Energy Husqvarna Factory Racing’s Trevor Bollinger would come through sixth in the XC1 Open Pro class. Bollinger suffered a hand injury at the previous round of racing and came out to salvage some valuable points before heading into the Summer Break.

In the FMF XC3 125 Pro-Am class it was Magna1 Motorsports/Husqvarna’s Brody Johnson coming through to earn his sixth win of the season. Johnson currently sits second in the points standings behind Carolina XC/Moose Racing/XC Gear’s Zack Hayes who finished second at Snowshoe. Liqui Moly Beta Racing’s Jason Lipscomb came through to earn third in the FMF XC3 class after making a last lap pass for the podium position.

In the morning amateur race, it was AmPro Yamaha’s Rachael Archer coming through to take the overall and WXC class win. This would be Archer’s third win of the season, and she would do it in a dominating fashion. KTM Canada/FXR Moto/Blud Lubricant’s Shelby Turner would battle back to finish second in the WXC class, her first podium of the season. Rounding out the WXC class podium was Trail Jesters KTM Racing’s Korie Steede who made a last lap pass to earn third. Unfortunately, due to extreme weather conditions the checkered flag flew after an hour and 30 minutes of racing.

Team Green Kawasaki’s Nick DeFeo would continue his youth dominance as he came through to earn his ninth-straight overall win and YXC1 Super Mini Sr. class win atop Snowshoe Mountain. Van Gosselin and Peyton Feather would come through to round out the top three overall youth and YXC1 class finishers.