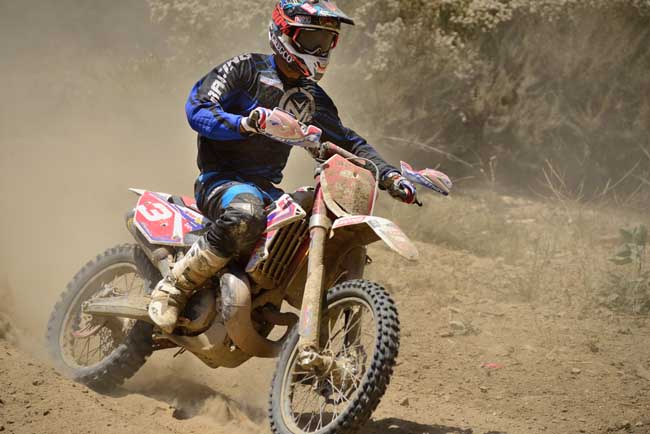 Nick Burson led the Purvines Beta Team to a hard-fought victory in the John Burr 10 Hours of Glen Helen this weekend. The Purvines squad was comprised mostly of new recruits, assembled specially for this race, adding Ryan Abbatoye and Bobby Garrison to existing teammates Justin Morrow and Burson.  Those riders gave Purvines impressive speed and consistency, and allowed them to escape a talented RPM Racing KTM team, comprised of Justin Jones, Ty Tremaine and Eric Yorba.
This was technically the first event to ever bear the “10-Hours of Glen Helen” name. But it actually comes into the schedule to replace the 12-Hour, which has been held for the last nine years. Cutting two hours out of the schedule allowed the staff to execute the race more effectively without pushing the boundaries of daylight. Three years ago, the race was actually held at night to deal with that problem, and officials haven’t ruled out that possibility for the future. As for this year, no one complained about the missing  two hours. In fact, it was a particularly grueling race, made more difficult by the record dry conditions in Southern California. To deal with the dust, the first lap of the event was shortened to four-miles of watered and prepped terrain. On the second lap, the racers were served the full nine-mile course, including dusty ridge sections where the water truck couldn’t fit. The course was again designed by the Dirt Bike Magazine staff, and included motocross, single-track, EnduroCross and even the Lucas Truck racing facility.
Despite the dust, the Purvines and RPM team raced wheel to wheel for almost the entire race. Justin Jones started the race with a big holeshot, followed by Robby Bell of the Precision Concepts/Dirt Bike team. Bell fell on the first lap and lost almost a lap with bike repairs. That left thePurvines team solidly in second. By the halfway point in the race, only those two teams were on the lead lap, and they had traded the lead several times. At one point, a course change cost Ty Tremaine a few valuable seconds and allowed the Beta team back into the lead, which never changed hands again.
In the meantime, there was a three-way battle for third. Nick Stover’s KTM 250 team battle with Blayne Thompson’s Honda CR250 team for  first place 250 Expert honors as the Precision Concepts team slowly reeled them in. In the end, the Robby Bell, Mark Tilley/Benny Breck team passed the two two-strokes to take third overall. Stover’s KTM, with Joey Black, Nick Garvin and Bryan Burch, eventually finished ahead of the Thompson/Justin Seeds Honda. Another Beta was in sixth overall (third 250) with Curtin Bradley as rider of record.
Amazingly enough, the top Iron man was seventh overall. Kris Keefer of Dirt Rider Magazine rode the same KTM 150 he used to win the Six-Hour, back in March. For more results, go to www.glenhelen.com.
Share FacebookTwitterGoogle+ReddItWhatsAppPinterestEmail