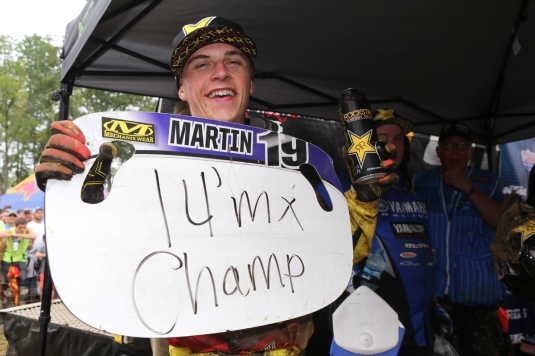 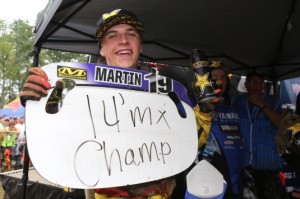 Yamaha’s refreshed concept for the 2014 YZ250F came through the toughest national motocross series in the world with flying colors last weekend as Yamalube Star Racing’s Jeremy Martin clinched the MX250 AMA Pro National MX Championship in the United States. The victory marked the first U.S. title for Yamaha since Grant Langston’s success in the premier category in 2007 and to compound the ratio of success in the 250 division this year three different riders – Martin, Star team-mate Cooper Webb and Valli Yamaha’s Christophe Pourcel – all stood on the top step of the AMA podium. Martin, 20 years of age and from Millville, finished eighth overall in the eleventh round of the Nationals at Crawfordsville, Indiana to make sure of his champion status.

The American’s spoils dovetail a fantastic result at Lommel, Belgium two weeks ago for the fifteenth round of seventeen in the FIM Motocross World Championship where Bike it Yamaha Cosworth’s Max Anstie gave the ’14 YZ250F its first Grand Prix triumph.

Back in the U.S. and Martin finally sealed an amazing breakthrough term in which he claimed the first five motos of the season and won a total of eight on the way to an unassailable lead in the standings after the inaugural event in Indiana and just one week from the end of the lengthy AMA off-road racing campaign.

“The best feeling I’ve ever had. Unreal dreams come true [sic],” said the rider via his Instagram account who has been selected for Team USA for the 2014 Motocross of Nations on September 27-28 at Kegums in Latvia for the first time.

Martin will wear the number one on his Yamaha in 2015 and carry the red plate for the last time this year for the AMA closer at Tooele next weekend. The new champion – Yamaha’s first in the smaller category since Jeff Emig in 1992 – is the first of three YZ250F runners in the top five of the contest with Webb in third spot and Pourcel (with the most amount of holeshots this season) currently fifth.

The sixteenth and seventeenth rounds of the FIM Motocross World Championships will take place in Brazil and Mexico during the first two weekends of September.