The MXGP of the Netherlands was the massive home stage for a handful of Dutch riders this weekend but none where watched closer than the now 24-year old Herlings. An electric atmosphere created by tens of thousands of MXGP fans filled the air at Assen, nicknamed the “Cathedral of Speed”. The venue has hosted some of the top motorsports athletes in the world as they made history and today was no exception. The magnitude of the event was not just evident by the massive crowd but also with special guests like the Minister of Sport for the Netherlands Bruno Bruins, the Mayor of Assen Marco Out, and many others watching the racing and taking part in the podium ceremonies.

Red Bull KTM Factory Racing’s Jeffrey Herlings has been impeccable this season with 16 wins of the 19 races so far. Today the life long dream of the “bullet” came true as he was crowned World Champion at the highest level of motocross, the MXGP FIM Motocross World Championship. 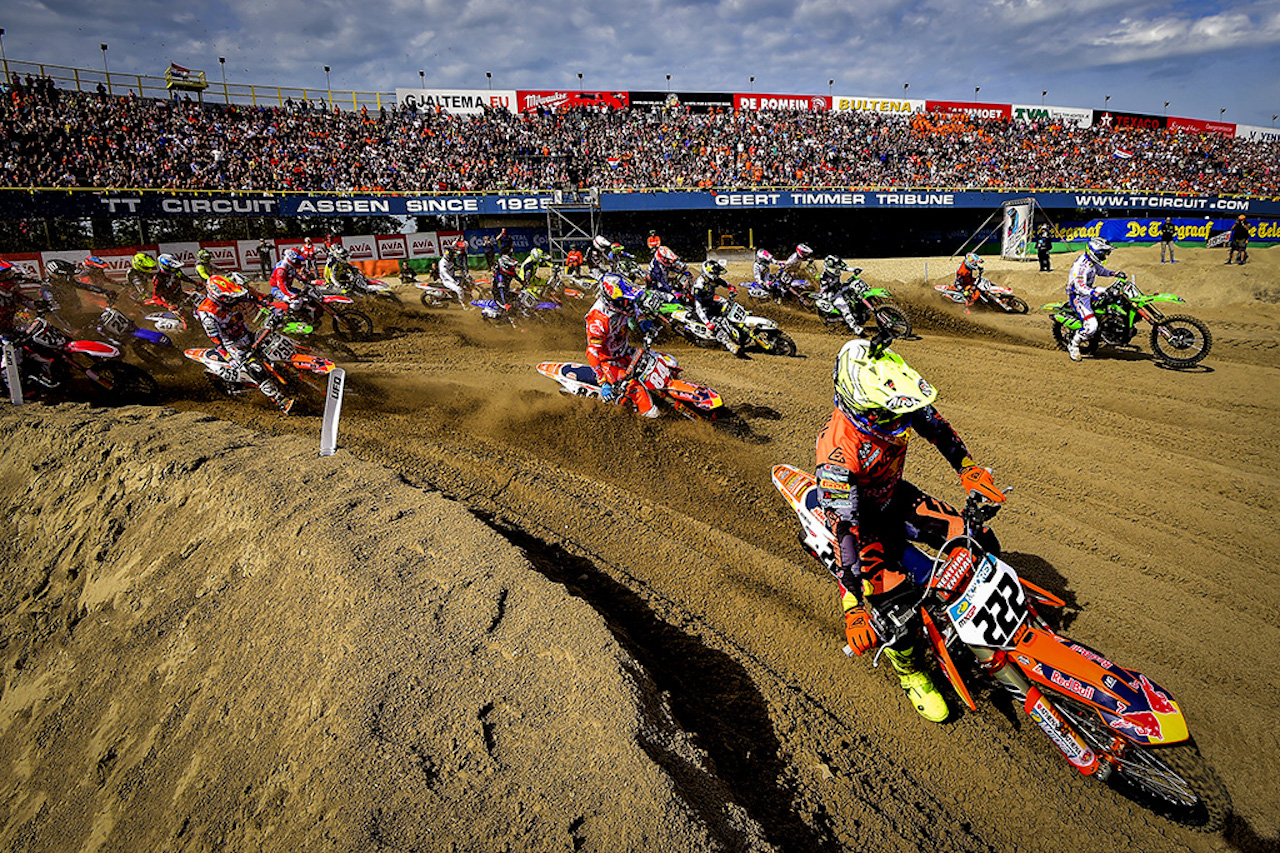 Coming into race 1 Herlings needed to finish 16th or higher to clinch the title but off the gate his Red Bull KTM Factory Racing rival Antonio Cairoli took the FOX Holeshot. A test of Herlings’ mentality ensued and even with the option to let Cairoli get away, the Dutchman pushed forward.

Giving chase to the two leaders was the third Red Bull KTM Factory Racing rider Glenn Coldenhoff. The second Dutch rider in the top three brought the crowd to their feet with the pressure of Rockstar Energy Husqvarna Factory Racing’s Max Anstie bearing down on the #259.

Massive roars from the crowd were common but none matched the magnitude of those heard as Herlings took the lead away from Cairoli. Cairoli fought back immediately along the roller straight next to the grandstands but Herlings maintained the position.

Lap after lap Herlings grew his lead over Cairoli while the Italian did the same to the rest of the field. Meanwhile Coldenhoff was still under pressure from Anstie for third and on lap 8 the Brit was finally past after a crash from the Dutchman. Also taking advantage of the misfortune for Coldenhoff was Team HRC’s Tim Gajser who moved from 5th to 4th. A strong start from Wilvo Yamaha Official MXGP’s Shaun Simpson positioned him 7th for the first 2 laps before gaining a spot on Monster Energy Kawasaki Racing Team’s Julien Lieber. 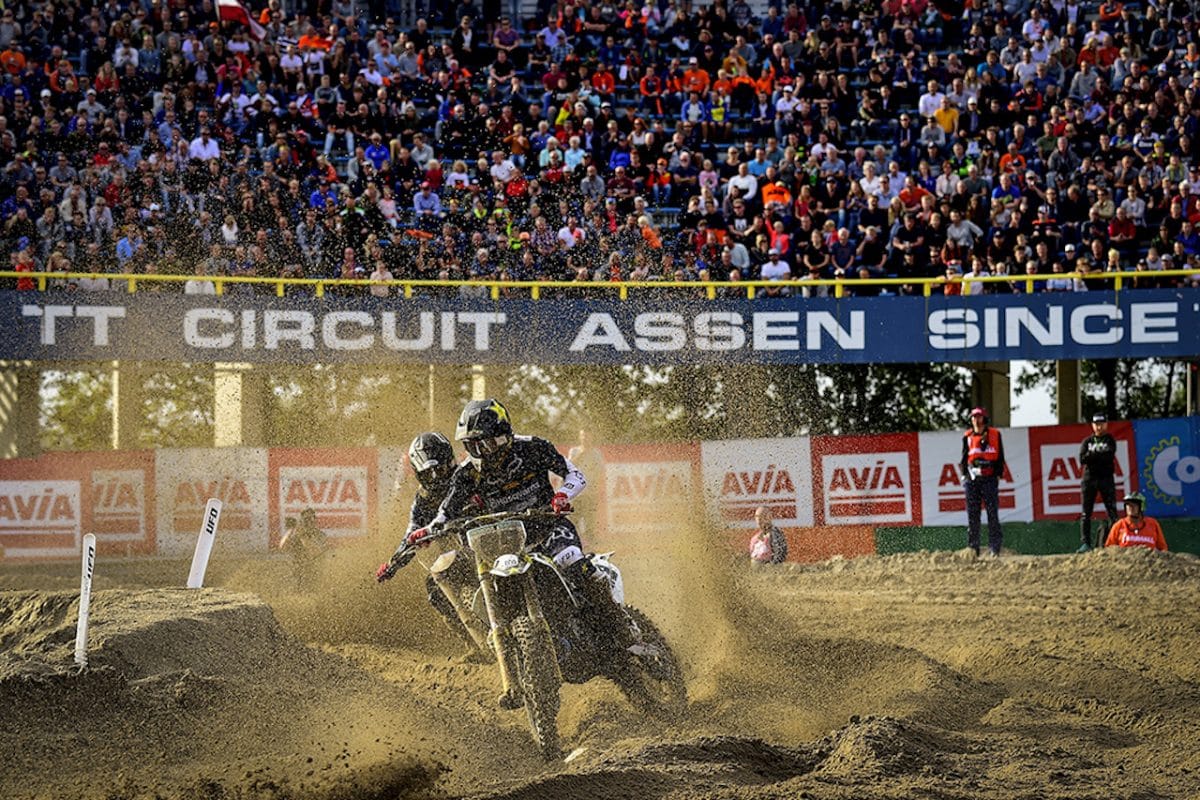 Simpson was finished the race 6th as Herlings took an emotion charged and dominate race win lapping up to 7th position and earning him the title of MXGP World Champion for the first time in his career. The celebrations started immediately for Herlings who joined his team, family, and friends while Cairoli took second and Anstie third.

MXGP Race 2 came just 2 hours later and Herlings lined back up with the new number 1 plate. The Dutch crowd were again full of vigor as Coldenhoff took the Fox Holeshot. Herlings ran second while Cairoli was 5th but the Italian jumped to 3rd by the second straight.

Herlings then made a rare mistake and fell while in pursuit of Coldenhoff for the lead. The fall dropped Herlings to 6th behind Anstie but only briefly as he jumped long to get by the Brit. Next on the running order for Herlings was Gajser but Cairoli was making successful moves for the lead on Coldenhoff. With Cairoli in the lead Herlings quickly dispatched both Gajser and Coldenhoff to reclaim 2nd. Anstie also moved by Gajser and closed on Coldenhoff the following laps.

Herlings then lined up Cairoli for a pass but the Sicilian responded well to keep the new World Champion at bay. Not long after the pass attempt for Herlings lapped riders and bad line choice from Cairoli allowed the Dutchman into the lead.

At the finish it was a massive victory for Herlings ahead of Cairoli, Coldenhoff, and Anstie. In the Overall standings it was a clear victory and strong finish to a perfect weekend for Herlings with Cairoli second and Anstie third. 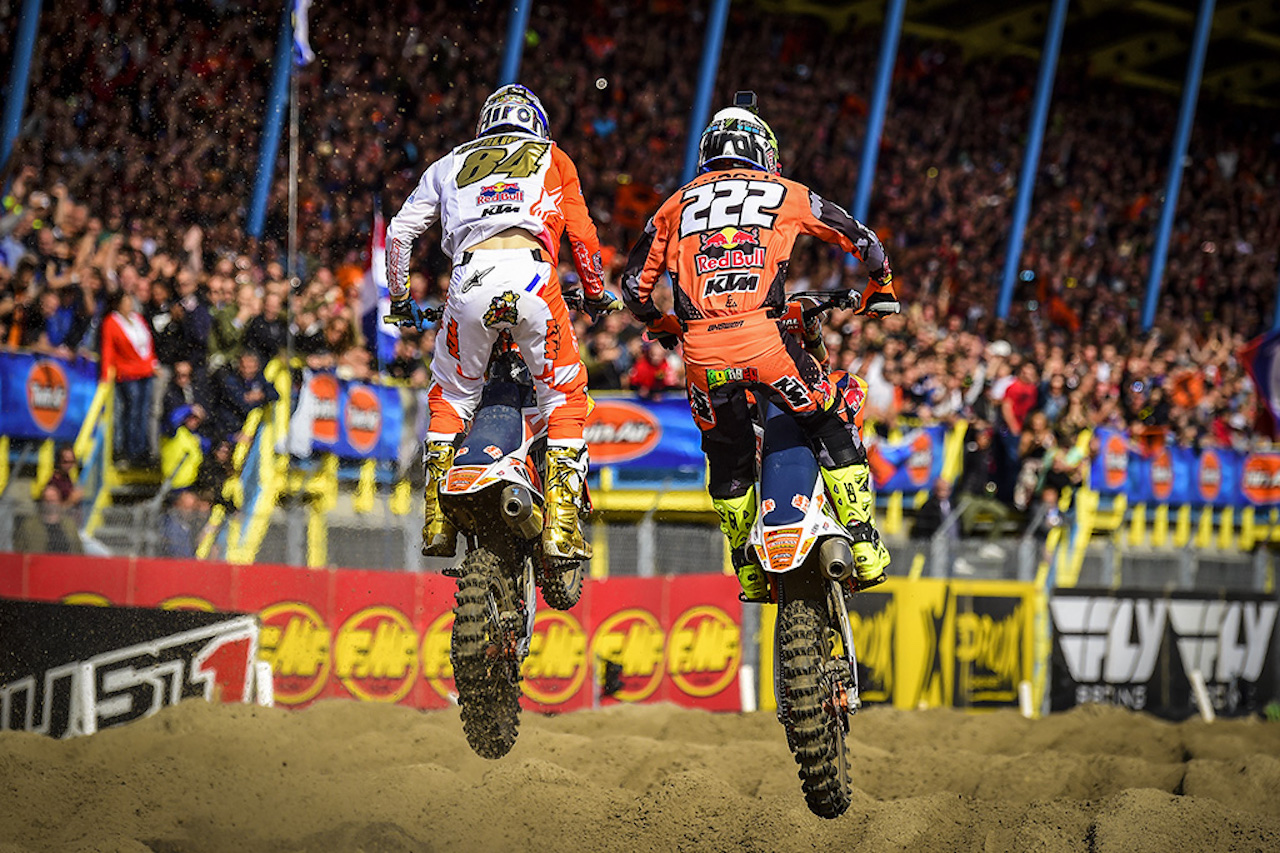 Jeffrey Herlings: “I don’t really know what to say, it has been an amazing day! It has been a blessing to be in my shoes today. Everyone says to enjoy the day but it is so hard, I remember waking up this morning and now we are here, everything has happened so fast. To do this in front of the home crowd at Assen’s TT circuit it is amazing, it is really a special day.”

Antonio Cairoli: “For me it is an honor to be second behind Jeffrey because he is definitely the fastest rider in the world at the moment and I’m not taking second to just anyone. I know I can be more competitive but it is a nice challenge and congratulations to him and thanks to Red Bull KTM for helping us to 1st and 2nd this season.”

Max Anstie: “I definitely enjoy being up on the podium with these guys and seeing the crowd it is unbelievable. It was something special today and I have not seen this many people since I don’t know when.”

CHECK OUT THE MXGP HIGHLIGHT VIDEO FROM ASSEN BELOW