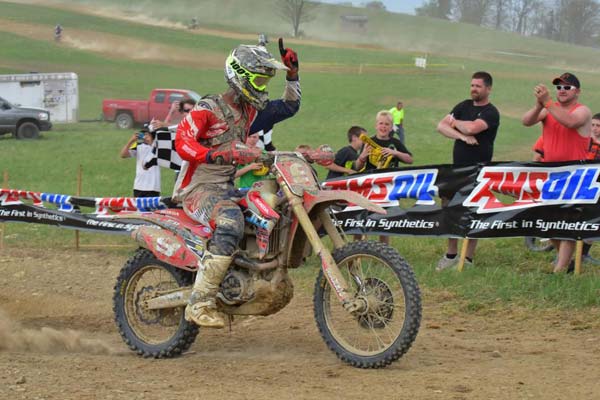 After a hard fought day of racing, coming from as far behind as sixth place on the opening lap, JCR Honda’s Chris Bach would emerge with his first ever-career GNCC overall win.
“I just kept telling myself to relax and not let it get to me,” said Bach “I’ve never lead one of these for very long much less half the race.”

As the green flag dropped, it was Husqvarna Canada/Parts Canada-backed rider Tyler Medaglia who shot off the start to claim the $250 All Balls Racing Holeshot Award. However, Medaglia’s day would end early due to an ankle injury. Rocky Mountain ATV*MC KR4/FAR Race Team’s Thad DuVall soon found himself in the number one spot with AirGroup/Rockstar Energy/Husqvarna’s Ryan Sipes and Factory FMF/KTM’s Kailub Russell in tow.

DuVall would run into brake troubles not once, but twice. After pitting and taking some time to fix the troubles, DuVall’s day would ultimately be cut short after suffering from brake failure once again which resulted in a hard crash. Russell would reclaim the lead on lap two, but would soon be faced with pressure from both Bach and Sipes. Russell would come in second place, ending his season win-streak. Sipes would round of the podium with a third place.

“It was definitely a man’s track, it was rough out there,” said Russell “I’m pretty disappointed, it’s not the end of the world though I got second.”

Rockstar Energy Husqvarna’s Josh Strang got off to an excellent start, challenging Tyler Medaglia for the holeshot. However, Strang would quickly fade through the pack, ultimately only completing three laps of the six-lap race.

In the XC2 Pro Lites class, Sam Evans claimed the $100 Hot Cams Holeshot Award. DirtWise/Maxxis/KLIM-backed rider Jason Thomas would move his way into the lead, but soon face what seemed to be mechanical issues. Thomas maneuvered his way through the remaining laps to hold on and take the XC2 Pro Lites class victory at the Tomahawk GNCC.

Husqvarna’s Support Rider Craig DeLong would hold the early lead, but after being seen coming through on lap two with both his front and rear fender bent upwards, it was apparent Delong had suffered a hard fall which would cost him time.

Ride On Cycle/Moto Playground’s Tegan Temple would have his best finish of the season at the inaugural Tomahawk GNCC. Temple held a consistent second place from lap one until the checkers flew. RideMPS.com/AMSOIL/Honda’s Layne Michael would make a last lap charge to claim the XC2 Pro Lites third place ahead of Raines Riding University/Atlas Yamaha/OffRoadViking.com’s Ricky Russell and Moto-Tech KTM’s Trevor Bollinger rounding out the top five.

The 1 p.m. race was broadcast LIVE in its entirety on RacerTV.com and can be viewed as an archived video now online by visiting the GNCC LIVE page on RacerTV.com. Race coverage will also be broadcast on NBCSN on Sunday, June 28 at 3:30 p.m.

The 2015 AMSOIL Grand National Cross Country Series resumes May 23 and 24 with the Rocky Mountain ATV*MC Mountaineer Run in Masontown, WV. For more information on the series, visit www.gnccracing.com.