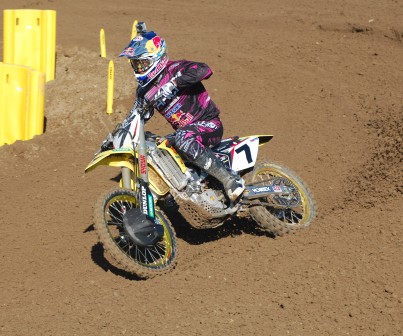 Corona, CA- Congratulations go out to James Stewart as he stepped atop the podium this past weekend at the first round of the AMA Nationals in Prairie City, Ca. James rode two solid motos to take the win at the historic Hangtown Motocross and is looking forward to doing it once again at the next stop in Freestone, TX.

Everyone here at Answer Racing was especially happy for James after an extremely busy couple of weeks with the mid-year switching of teams. Stewart was able to dig deep and fend off a couple of early charges to win by a comfortable margin in both 450cc motos. While crossing the finish line Stewart threw his arms up in victory as it was no doubt an emotional time for not only James, but also everyone involved with his racing program as well.

Here at Answer we were equally as excited to not only see him get his first win of the 2012 Motocross season, but to get that win in Answer’s new 2013 Alpha AIR riding apparel. With the Hangtown race being held in the heat of Prairie City, Ca, we decided the Alpha Air gear in our White/Blue/Green color way was the perfect choice. Look for Answer’s 2013 Alpha line in stores everywhere this summer.

Be sure to watch this weekend as James races round 2 at Freestone MX.

See you at the races!