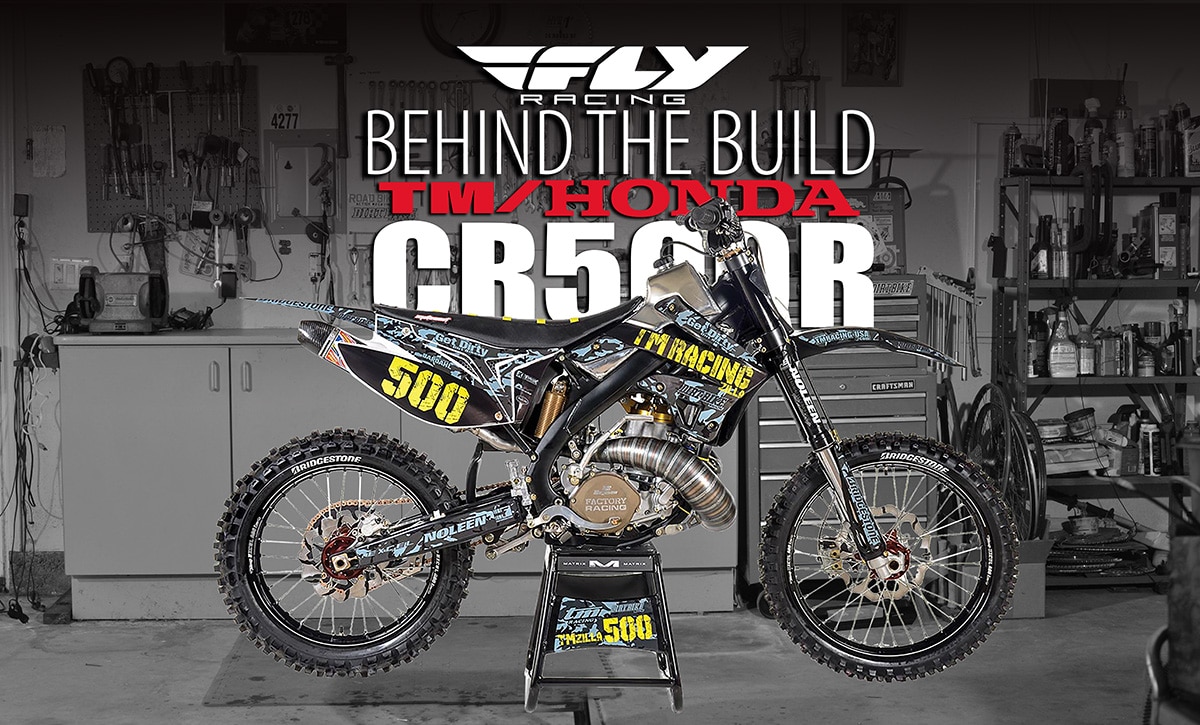 TM is a small motorcycle manufacturer located in a small town in the Italian countryside. TM makes a limited number of hand-built, very specialized machines each year and is perfectly content doing so. The largest-bore two-stroke TM has ever produced is 300cc, and we don’t think TM plans to change that any time soon. Enter Ralf Schmidt. Ralf is the current TM U.S. importer. He is all about big-bore two-strokes and specifically the Honda CR500R. Our “TMzilla” project was fueled by Ralf’s rare combination of interests.

Although TM has used a number of Kawasaki and Honda products on its machines in the past, we can guarantee the TMzilla will never see life as a production machine rolling off TM’s assembly line. But, this in no way stopped Ralf from making his dream a reality. The build started with a lot of time spent in front of a computer looking at various Craigslist posts for a decent CR500R donor engine that didn’t cost a fortune. This sounds way easier than it actually is. As a matter of fact, this might have been the toughest part of the entire project.

As DB staff members, we have figured out that dropping a fire-breathing CR500R powerplant into any old chassis is definitely not a good idea. Service Honda did it with first-generation aluminum frames and had us craving the OEM steel chassis like a glass of ice-cold water in the middle of summer. After test-fitting the newly acquired CR500R engine in a variety of OEM TM aluminum frames, we made an interesting discovery. The 2020 TM 250/300 frame was almost a perfect match. Yes, there were some engine-mount modifications performed by Dave Turner, who just happens to own TM’s number-one dealer in the USA, Get Dirty Dirt Bikes. 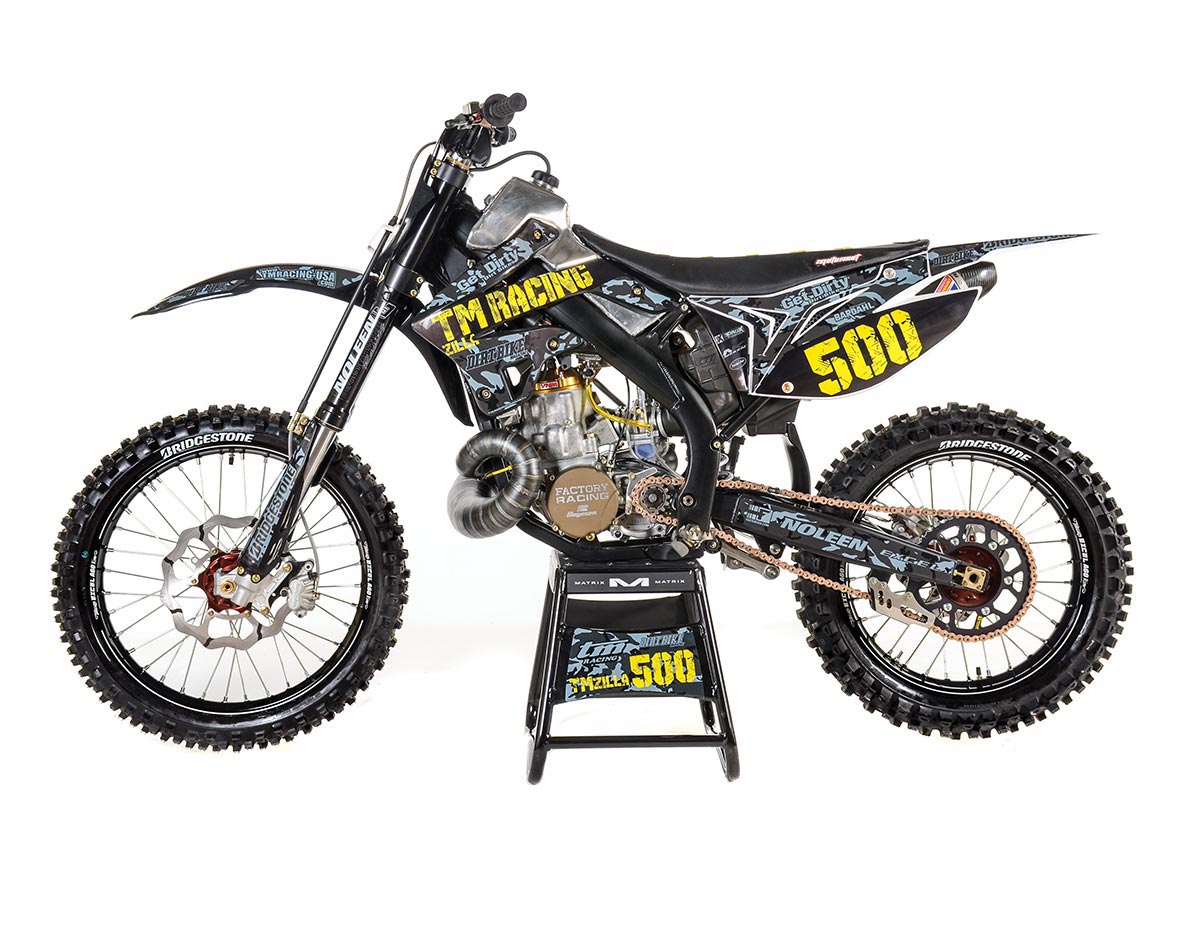 With the mounts modified, surprisingly, the cylinder, carburetor and airbox boot lined up perfectly. The Scalvini exhaust was also relatively easy to make fit. Only a couple of mounting tabs needed to be relocated to allow it to bolt right up. We used an aluminum oversized tank, originally designed for a 2008–2014 TM two-stroke. It required a substantial amount of modification but provided enough fuel storage to do longer GP-style events. With all the modifications performed and fitment double-checked, the main-frame swingarm and sub-frame were sent off to be powdercoated black.

A gold VHM head was installed, adding some bling and additional horsepower with its exchangeable combustion chamber design. Boyesen cast-aluminum ignition and clutch covers protected the side cases, and a complete Boyesen Rad valve intake system supplied the engine with fuel from the new Lectron carburetor. The last modification or bolt-on accessory we added was a Magura hydraulic clutch assist.

With all the major parts of TMzilla falling in place, the focus was on making it all flow together. Noleen handled all our suspension needs, and Faster USA built a set of new wheels with CNC-machined billet-aluminum hubs anodized a deep maroon color, black Excel A60 rims and stainless steel spokes.

The new wheels were wrapped in Bridgestone tires and utilized Galfer braking components. We installed an all-black set of plastics, and Ralf had his heart set on camouflage-themed graphics, so he had the crew at Thunder Designs bring his vision to life with yellow accents.

When you ride any CR500, regardless of the chassis, you have to overcome your initial fear of starting the bike. This was never that big a deal back in the old days, but the technique is in danger of being forgotten. You have to get the piston in just the right spot, just past the point of most resistance. Then, you need to bring the lever all the way up and kick like you’re angry. The slow, even four-stroke technique won’t cut it. You have to have a lot of downward foot speed while you blip the throttle just right.

It turns out that the TM chassis is a good match for the CR500R motor.  Our fears that it might be too rigid were unfounded. TM frames have been evolving along with the rest of the industry, and the modern KYB fork and TM shock were perfectly valved by Noleen Racing. Managing editor Mark Tilley was never a 500 rider back in the old days, but recently he’s become a big fan. “I think I would have loved these if I had been racing 30 years ago! You just kind of growl around the track. It’s sort of how I ride anyway.”

The bike still has all the hallmarks of a CR500R, both good and bad. It vibrates; there’s no getting around that. It also requires that you think ahead and plan out your lines. When you do it all right, the TM500 isn’t fearsome to ride at all. There’s something almost soothing about it. We now understand why Ralf always gets a huge smile on his face when he starts reminiscing about days spent on his CR500R at the Lommel sand track as a young man in Belgium.