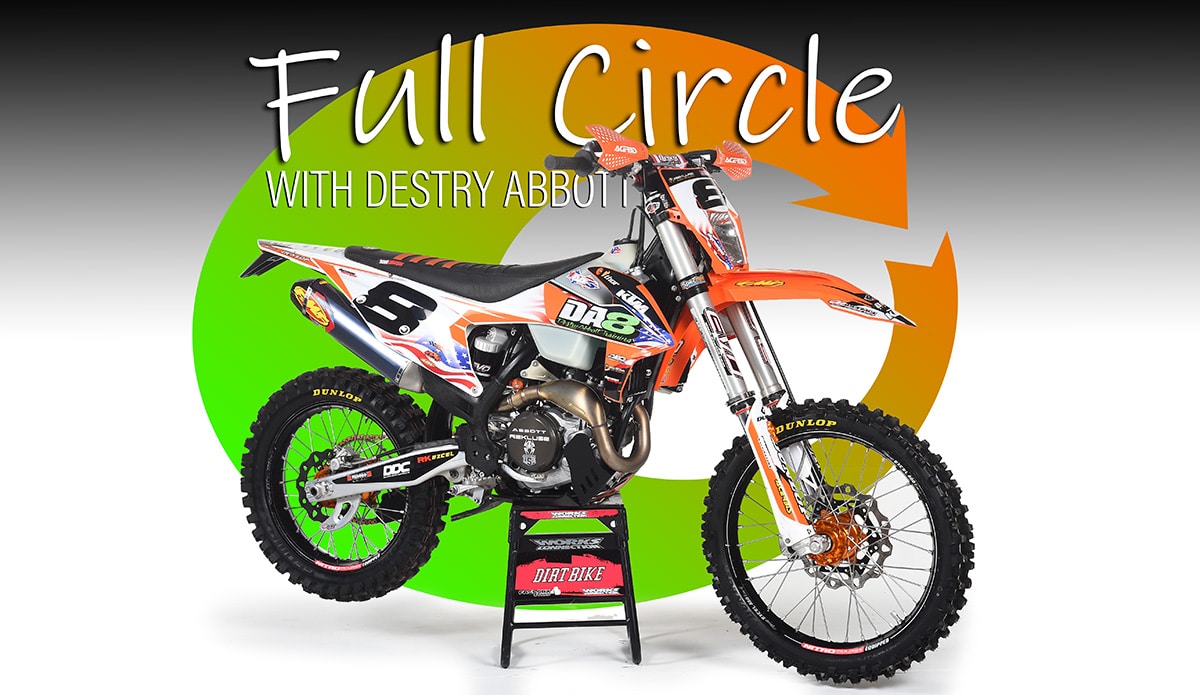 Note: Prior to the 2018 ISDE in Chile, Destry Abbott wrote the following piece about his bike and the journey that saw him return to his roots. The event was mixed; his son Cooper earned a gold medal, but it was a rare DNF for Destry himself.  Here’s what he had to say  beforehand.

I’m a big believer that things happen for a reason, and this is definitely one of those moments! I know a lot of people think I’ve always ridden for Kawasaki, and that’s understandable, considering most of my professional career and major championships were on Team Green; however, what most people don’t realize is that I actually started racing KTMs back in 1987 (let the old man jokes begin) and raced them until 1997 when I raced my first ISDE in Italy on a club team.

It had always been my dream to race the ISDE one day, and after Italy, I was definitely hooked! It’s by far one of my favorite race events and really pushes a racer to his or her limits. With six long days of racing, staying on a time schedule, working on your own bike, and being able to sprint like an MX rider but understanding when and when not to push the edge, this event will challenge even the toughest racer. Italy is still one of my favorites, since I actually overalled a test that year, which was really rare for a club rider to do! I also finished that Six Days with a gold medal, and my results really helped me turn a few heads and earn a ride with factory Kawasaki off-road. I would go on to race seven more ISDEs on the USA Trophy Team, and then I figured 2012 in Germany was going to be my last one, because I was pretty content with what I had accomplished.
Of course, as most of you know, the last 2 1/2 years have been a totally different type of battle, and I’m very lucky to be done with that (cancer). At the end of last year, Cooper my son, who is now 20, and I were looking for a team to race for, and that’s when a door opened up at KTM. It was a great opportunity, and I wasn’t going to pass it up. I’m excited to be back on a bike that really has come a long way from when I raced it and a team that really puts a lot of focus into off-road.

Earlier this year Cooper was telling me he really wanted to race Six Days for the first time, and I said let’s try to qualify and see how it goes. Well, after the qualifiers, both Cooper and I had qualified for Chile, and this was something I was excited to experience with my son. To be able to represent our country and then to be able to do it alongside my son is something I never even dreamed of. I’m 99 percent sure this will be my last one, and there’s no better way to end my ISDE career than racing with him. On a side note, we do have a side bet that I’m still going to beat him, and you can guarantee I’m going to give it everything I can to do that! Old guys rule! (Editor’s Note: There’s no word on the stakes of the bet or whether Destry paid up!)
Now, getting to the biggest thing that is going to get me to the finish—the KTM. I’ll be on the 2019 KTM 450XC-F. I loved my 2018, but the 2019 is even better! With both bikes being stock, a few things that really stuck out to me were the cornering and the slimmer and lighter feel. I really felt like I could be farther up on the bike in the corners and get it to stick to the ground more. Any of my longtime mechanics can tell you I’m a pretty picky rider regarding my bike setup and especially suspension setup.

Most of the bikes these days are pretty amazing, and I honestly don’t see many people doing much to the motor for the 450s. With them all being fuel-injected and being able to do ignition mapping changes, you really can change the power around to suit your style and type of riding. I’m not a big revver and really put focus on using the meat of the power down low and getting traction to the ground, which also makes it more efficient and helps the shock work better. The older I’ve gotten, the more efficient I try to be with form and bike setup.
As I was saying earlier, the bikes are amazing these days, but we’re all at different levels, have different body types and different riding techniques, and ride different types of terrain. After battling leukemia for 2 1/2 years, I know I’m not the same physically. I want my bike to be smooth yet fast at the same time to help me save energy. I’ve spent a lot of years testing for different companies and absolutely love the setup I have now more than anything I’ve ever been on.
Here are some of the things I’ve done to my 2019 for the ISDE in Chili. The terrain will be a combination of dry, hard-packed dirt some days and then a good mix of beach sand, which requires two totally different bike setups; however, you have to find a happy medium for everything. One of the biggest things for me is suspension. The air forks aren’t bad, but I really like the spring feeling and consistency a lot more. We did the WP/EVO spring conversion, and this is way better for me. We started with my 2018 setting, but I found it to be a little on the soft side for the 2019. I don’t know if that’s because the front end feels more planted to the ground, but I found it to dive more and ended up going with a stiffer setting than before. I run the stock shock; however, I went up two springs and changed the valving. Speaking of traction, I run Dunlops with the Nitro inserts in them so I don’t have to worry about flats.

In Chile I am using AT81 models with an 18-inch rear wheel. The 2019 KTM doesn’t really get bad head-shake, but I’m a huge fan of the GPR stabilizer and like to be able to ride relaxed and not ever have to worry about it. Plus, I also run Fasst Company Flexx Bars, which are a must for me and help more than people realize—not just for jumps and big hits, but hardpack braking and taking that pressure off your wrist and hands. It’s an amazing difference if you compare them to other bars and will also make your forks feel plusher.
We have to run a quieter exhaust system, and we both run the FMF system with a spark-arrestor insert. I just did the slip-on and liked the low-end power with this setup. I could ride it a gear high in sections, and the power was super usable and tractable. I did change the mapping and was having a little bit of an issue with it popping (lean) in deceleration when it was stock. The guys at Twisted Development nailed the setting that I was looking for and took that lean popping away.
The Rekluse is a must for me, not just to get a better motor feel, but I can also run the same clutch for most of the season. I run the RadiusCX in my extreme bike (250/350), and then in my MX and 450s I run the TorqDrive. Of course, the bike rips, and stopping is just as important as speed—or even more important in my case these days. I run a 270 front Braketech caliper and disc, and then we did some testing on a new rear disc material that is insanely good. You don’t want the brakes to lock up, and having a good progressive feel is really important, especially for dry, hardpack conditions. 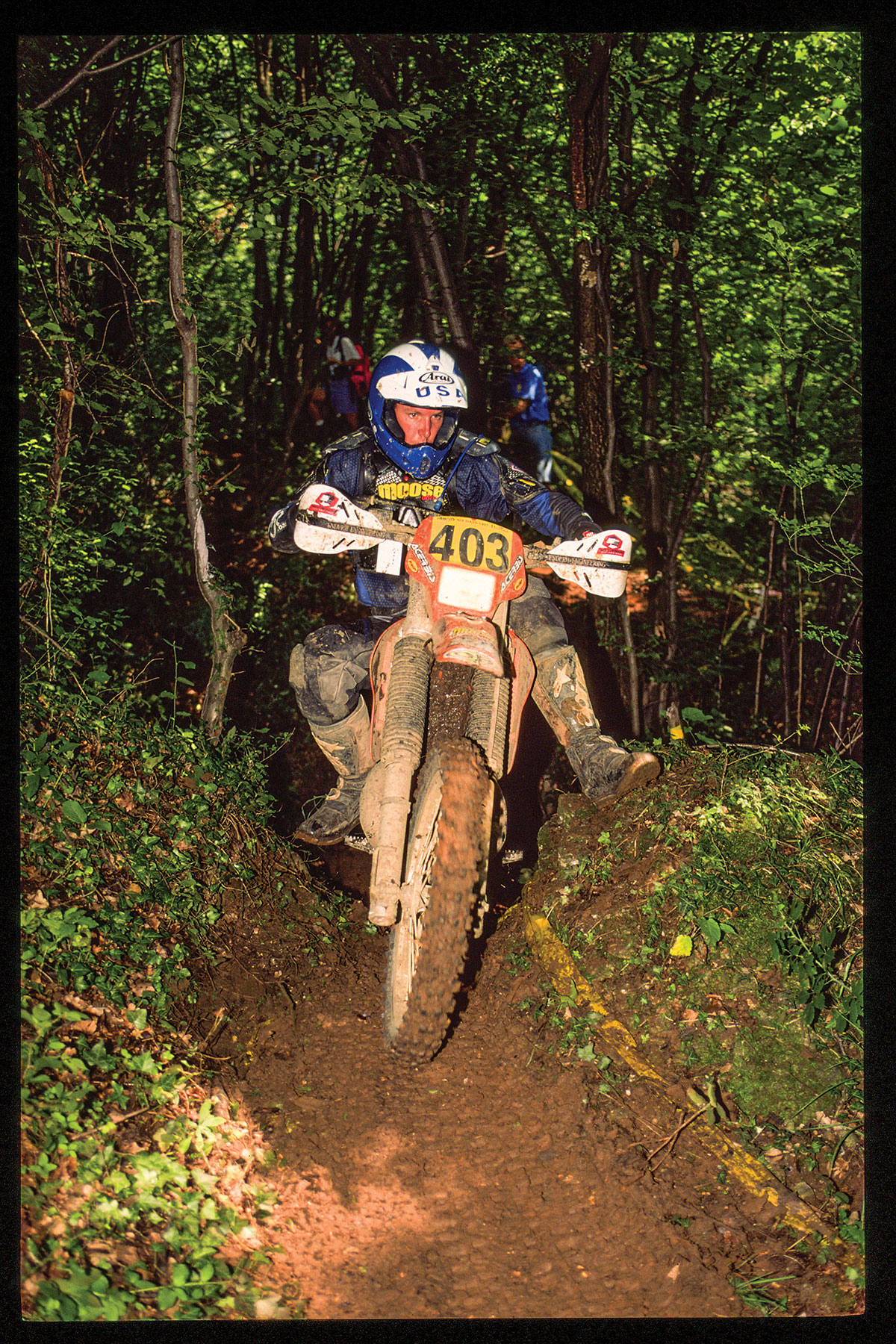 The 2019 seat cover is better than last year’s, but I like a grippy seat cover and exchanged it for the Concept seat cover. I also changed the pegs out for the IMS Core units in the aggressive MX-style design. For any type of off-road races, I highly recommend the AXP skid plate that covers the linkage. I actually run the skid plates on my MX bike too. Plus, an 18-inch rear wheel (RK) is a must and will give you more sidewall, which will also make your shock work better for acceleration in hardpack conditions. The radiator guards look pretty stock, but they’re actually FLO aluminum guards and protect the radiators from getting bent or damaged by sticks and branches.
I have a lot of great bolt-on items that really help protect the bike and make it last longer. There really isn’t anything on my race bike that anyone can’t get, and I promise you this setup won’t disappoint you one bit!