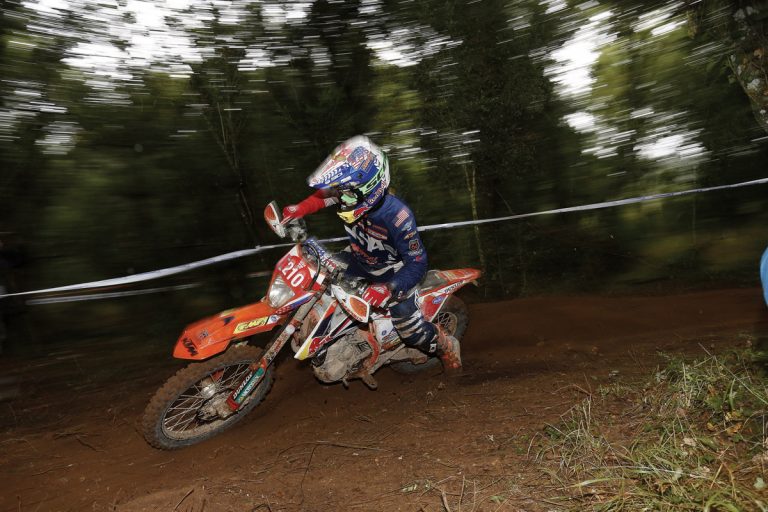 Day three of the FIM International Six Days Enduro (ISDE) in Navarra, Spain served up some very different riding conditions as rain both prior to and during the day resulted in a slippery and demanding seven hours in the saddle for all competitors. Despite the change in weather the USA’s World Trophy team continued their battle with Italy as Kailub Russell – KTM, Layne Michael – Husqvarna, Taylor Robert – KTM and Thad Duvall – Husqvarna extended their lead to just over one and a half minutes. In the Junior World Trophy competition Sweden remain out front, just under two minutes ahead of the USA with Italy third. Australia continues to lead the Women’s World Trophy.

In stark contrast to the dry and dusty conditions of day one and two, day three served up not only a new course, but also some extremely demanding special tests. Separated by just two seconds come the end of the day, Spain and the USA finished as the two fastest World Trophy teams. Italy continued their good form in the event in third with Great Britain and Portugal fourth and fifth separated by thirty-two seconds on the day. In the overall World Trophy competition the USA extended their lead to one-minute and thirty-five seconds over Italy with Spain third, Great Britain fourth and Portugal fifth. “It was definitely a different kind of day today,” explained Taylor Robert. “I’ve had some good results in slippery, muddy conditions in the World championship races this season so I wasn’t too worried about the conditions. The tests were certainly slippery in places, but I kept mistakes to a minimum and had a good day. It was cool to be riding on some fresh trails. For me it was a great day.” Sweden continued to lead the way in the Junior World Trophy team competition, winning day three by just over one-minute. Italy managed to finish fifteen seconds ahead of USA with Finland and Great Britain fourth and fifth. The big news from the day was that Spain dropped from second to sixteenth following the DNF result of one of their riders. At the half way stage of the competition Sweden’s Junior World Trophy team riders Mickael Persson – Yamaha, Albin Elowson – Husqvarna and Jesper Borjesson – Husqvarna sit one-minute fifty-five seconds ahead of the USA with Italy and France third and fourth respectively. Australia’s Women claimed a third consecutive class win in the Women’s World Trophy team competition, ending the day ahead of Spain, Germany and the USA. In the overall classification the Aussie trio of Tayla Jones – Yamaha, Jemma Wilson – Yamaha and Jessica Gardiner – Yamaha now sit just under three and a half minutes clear of Spain with Germany in third. The fastest overall individual rider on day three was Taylor Robert – KTM, who finished close to eight seconds ahead of Portugal’s Luis Correia – Beta who in turn just edged out Australian Daniel Sanders – KTM. Josep Garcia – Husqvarna topped the Enduro 1 class, as the youngster finished ahead of countryman Victor Guerrero – KTM with Portugal’s Luis Oliveira – Yamaha in third