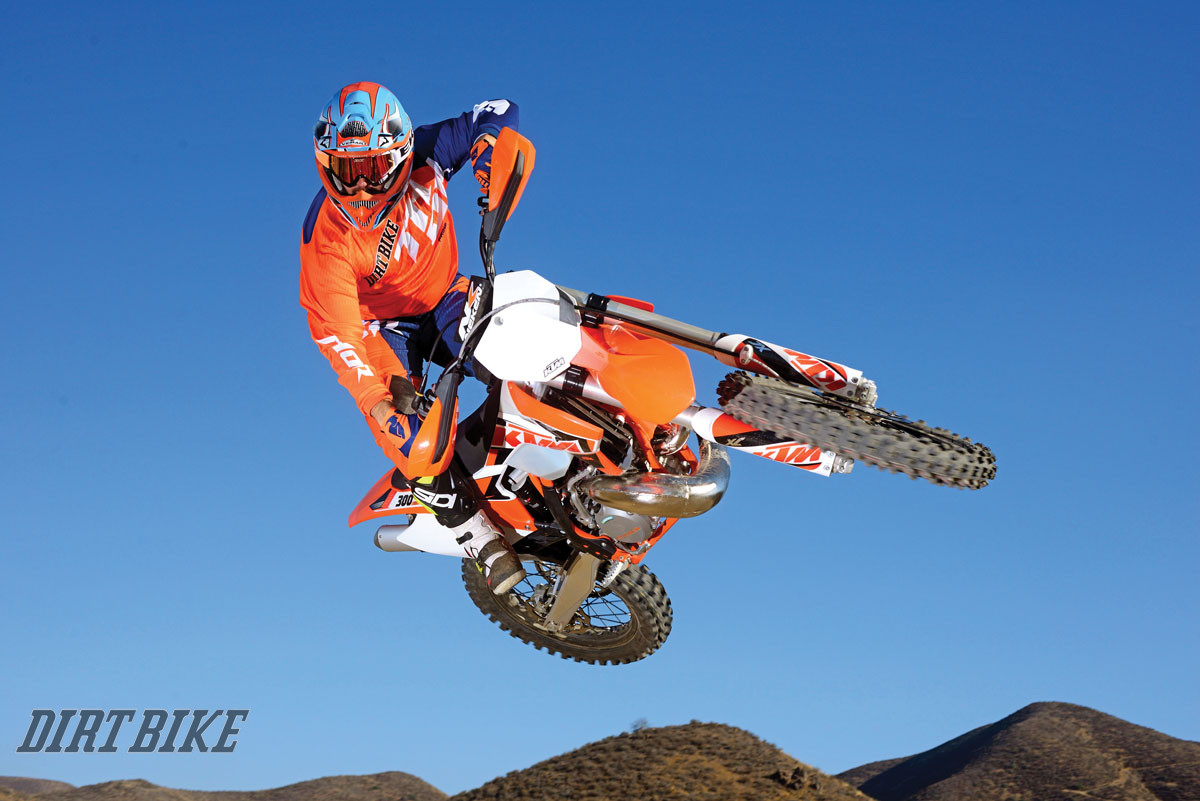 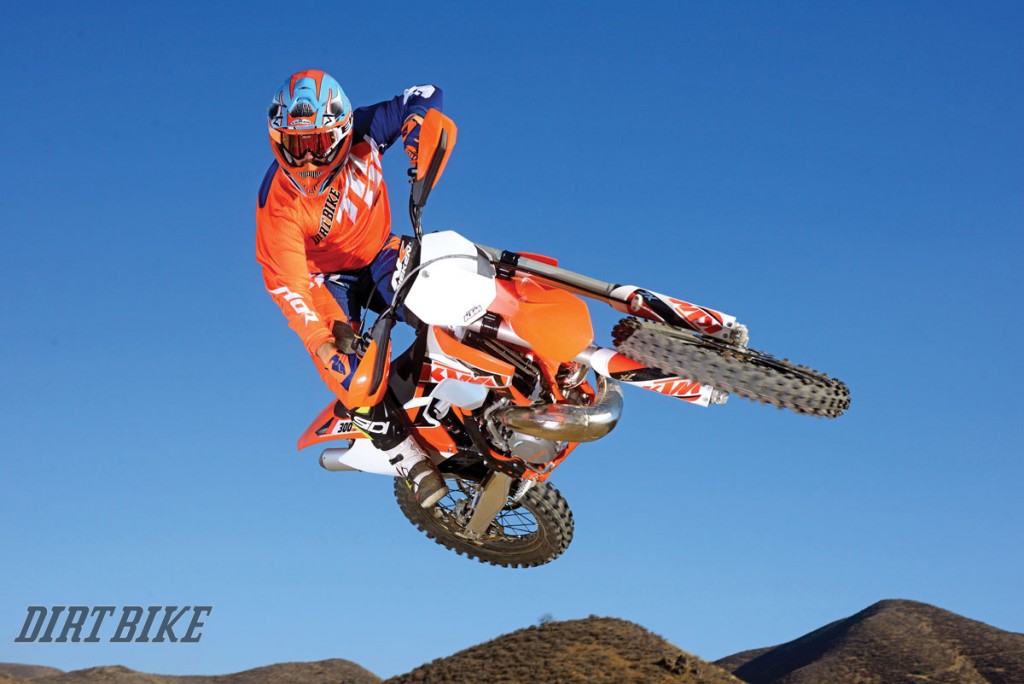 The torch-carrying mob meets right here. The KTM 300XC is like a rolling clubhouse for two-stroke lovers. It’s become the very definition of everything that’s good about the two-stroke motor and sparks angry debate over the state of affairs in the dirt bike world of today. The problem is that the 300XC doesn’t really support the conspiracy argument—the contention that there’s a secret agreement between government and motorcycle-makers to push four-strokes. The 300 is a perfectly modern motorcycle that receives just as much attention as any machine in KTM’s huge line. It’s available in dealerships everywhere. It’s hugely successful, and KTM shows absolutely no signs of standing in its way. If anything, the KTM 300XC proves there’s no conspiracy, no secret agreement and that the two-stroke engine is alive and has dedicated fans at the factory level.
THE 300’S PLACE IN THE WORLD
KTM makes two versions of the 300. The XC-W is more trail-oriented, and the XC model, tested here, is a little more racy. The main difference is that the XC has stiffer suspension with linkage in the rear. There are also differences in gear ratios and equipment. The XC has no headlight, no odometer, and is actually very similar to a motocross bike in looks and equipment. There is no motocross version of the 300 in the U.S., which means that the XC has to serve in that capacity as well.
Each year KTM gives the 300XC chassis all the same updates that the four-strokes get. For 2015, that means a new WP 4CS fork. The new fork has revised damping, as well as a much smaller front axle, and 2mm less offset between the fork-leg centerline and the axle location. That results in more trail, which can give the bike different steering characteristics. In the rear, the shock is longer and the linkage is different, but the rear-wheel travel is unchanged. Both ends have new valving.
The motor didn’t change too much, although it did get more updates than the four-strokes did for 2015, again showing that KTM doesn’t play favorites with engine types. There are jetting changes, and the power valve now opens 200 rpm later. KTM has different power valve springs that allow the end user to fine-tune that as well. The electric starter has different gearing to provide higher initial torque from the electric motor, and the new battery is said to be lighter and stronger. None of that should affect the sacred aspects of the motor. There are no changes to the porting, the pipe or the head, and nothing was done to change the power delivery. In case you don’t already know, the 300XC is imported as a closed-course motorcycle, just like a motocrosser. That has no bearing on the residents of most of the country, but in California, it is not eligible for a green sticker. If there’s any anti-two-stroke agenda, it’s confined to the West Coast for now. 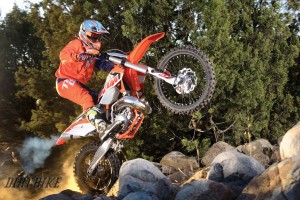 WHY IT’S SO GOOD
We assume that everyone already knows this, but we’re going to repeat it anyway. The KTM 300 is the greatest off-road bike there is. Beginners love it. Pros love it. The only people who don’t love it are those who have never ridden one. It’s all about the power delivery. The 300 motor can go all the way down to idle speed, pick up and go with perfect controllability. It doesn’t stall, even if you jab the rear brake with no clutch at all. It seems like the engine will just relight on its own. That’s why it appeals to riders of any level. The mistakes the beginners typically make are forgiven, and experts can push the boundaries of more and more extreme rides. It’s safe to say that the whole sport of extreme enduros would suffer a tremendous setback if the KTM 300 ceased to exist. Erzberg, the Tough One and the Romaniacs would probably have to soften their obstacles so other bikes could finish.
Compared to 450 four-strokes, the 300 only comes up lacking in sheer horsepower. The two-stroke engine doesn’t rev as high as a modern four-stroke, which is still a hard concept for old-timers to grasp. The 300 peaks around 8000 rpm and is completely done a short time afterward. Most four-strokes rev to 12,000 rpm, making more and more power all the way. That isn’t to say that you can’t keep up with a 450 on the track, but you have to shift early and ride hard. The 300 isn’t made for terrain that is flat and easy, and to take it there is missing the point. Having said that, the 300XC is actually a very fun motocross bike. It’s lighter than any 450, and the quick, responsive feel of the motor makes it feel lighter still. When you ride the 300 against a 450, you feel like you’re on a jet ski, zigzagging around battleships. But in the end, the battleships have bigger guns. 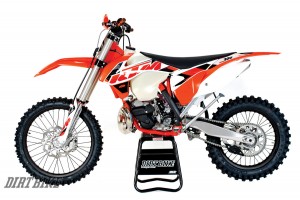 CUSH FACTOR
We think the 300XC has the best, most versatile suspension in the KTM line. Even the motocross bikes have the 4CS fork now, but those are set up stiffer. The XC isn’t really made to deal with big jumps, and the softer valving makes it work much better on sharp edges. The W models, on the other hand, are a little too soft for hard riding at speed. The KTM 300 strikes a balance that’s hard to beat. It can handle a natural-terrain MX course or do EnduroCross without modification. One advantage that the 4CS fork gives you is the ability to make adjustments on the fly. With the rebound clicker on the top of the right fork leg and the compression on the left, you can actually reach down and make an effective change in the middle of a special test. We never did it, but it was nice to know we could.
Yes, we love this bike. It’s good at the kind of riding that we, as a staff, like most. It’s light, powerful and foolproof. We like the Brembo brakes. We like the electric starter. We like the hydraulic clutch. We like the six-speed gearbox. And, most of all, we like the fact that KTM is still 100 percent on board the Good Ship Two-Stroke. We’ll keep it anchored right here as long as possible. o