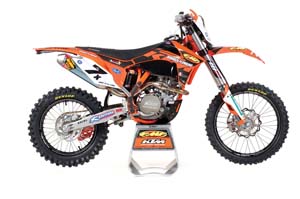 The powerhouse known as KTM, a smallish Austrian concern just a few short years ago, has slowly pounded nearly every facet of the dirt bike world into paste. Their latest goal in the off-road racing world is conquering Baja, a stark world that has been the stomping ground for green and red machines for over two decades. Racing Baja is a huge endeavor, and one that requires years of building provisions for crucial pit support; racers who have knowledge, wit and grit to perform at incredible speeds; and, of course, a machine that can chew on horrendous terrain while holding speeds for sustained periods of time.
Two years ago, KTM’s initial efforts proved that they had work to do. They tried building their Baja machine around the 530, and reliability proved to be a weak link. When Kurt Caselli decided that Baja was his next goal, KTM shifted serious resources into building a machine based around his National Hare and Hound-winning steed, but was fit with some additional safeguards for increased engine durability. The team dominated the San Felipe 250, proving that their wagon had the speed and durability and the team racers were gifted and Baja savvy. Following the Baja 500, where they finished third (Caselli was hurt, and Ramirez nearly destroyed the race bike early on), we got a chance to ride the full-factory race bike. KTM’s Anthony Di Basilio (head Baja tuner and Kurt’s mechanic) brought the machine down, along with racer Ivan Ramirez, for a test day at the rugged Stoddard Wells grounds. Here’s a look inside the full-factory race bike, along with input from Anthony and a personal view from our own Mark Tilley who got to ride the machine.

DIRT BIKE RIDES THE
MISSILE!
It’s interesting to us that in spite of the entire world switching over to fuel injection (and that’s KTM too!), they’re racing the older carbureted engine. The number one reason is reliability. Dirt is the enemy of FI systems, and until they come up with a way to use a quick dump can and keep debris out of the system, they’ll stick with the carbureted, factory Rally motor.
Breaking down the performance aspect of the machine was a bit of a shocker. Why? Because it’s so rideable. Based around Caselli’s National Hare and Hound machine, the bike has to have the ability to throttle down and handle tight, rocky terrain without flaming out, or have stiff enough suspension to suck up an 85-mph G-out and chew on rocky bone sections without rattling your fillings into jelly. And the KTM’s suspension is completely stellar. The front stays up in the stroke, feels light, feels cushy enough and takes high-speed hits with a substantial appetite. The steering for a desert-designed machine is not only predictable, it’s precise, and the 22mm offset rids the machine of its normal understeer issues. Out back, the WP Trax shock is not only unique, it does an excellent job of getting rear-wheel traction. The quick rebound feel when the tire loses traction is odd at first, as it’s replaced with damping as soon as the tire touches down again. Once you get used to it, the feel quickly becomes useable and friendly.
Engine-wise, it hauls the mailbag quite well. Even with moon gearing and a five-speed transmission, the power that it blows out is smooth, friendly and heavily thrilling. It makes things happen, but it still feels like you could trail-ride it in spite of the fact that first gear is probably good for 50 mph. Tilley got it up to a sustained 114 mph! And that says it all; brilliantly fast and handles like a factory machine should: sharp, precise and just plain wicked.