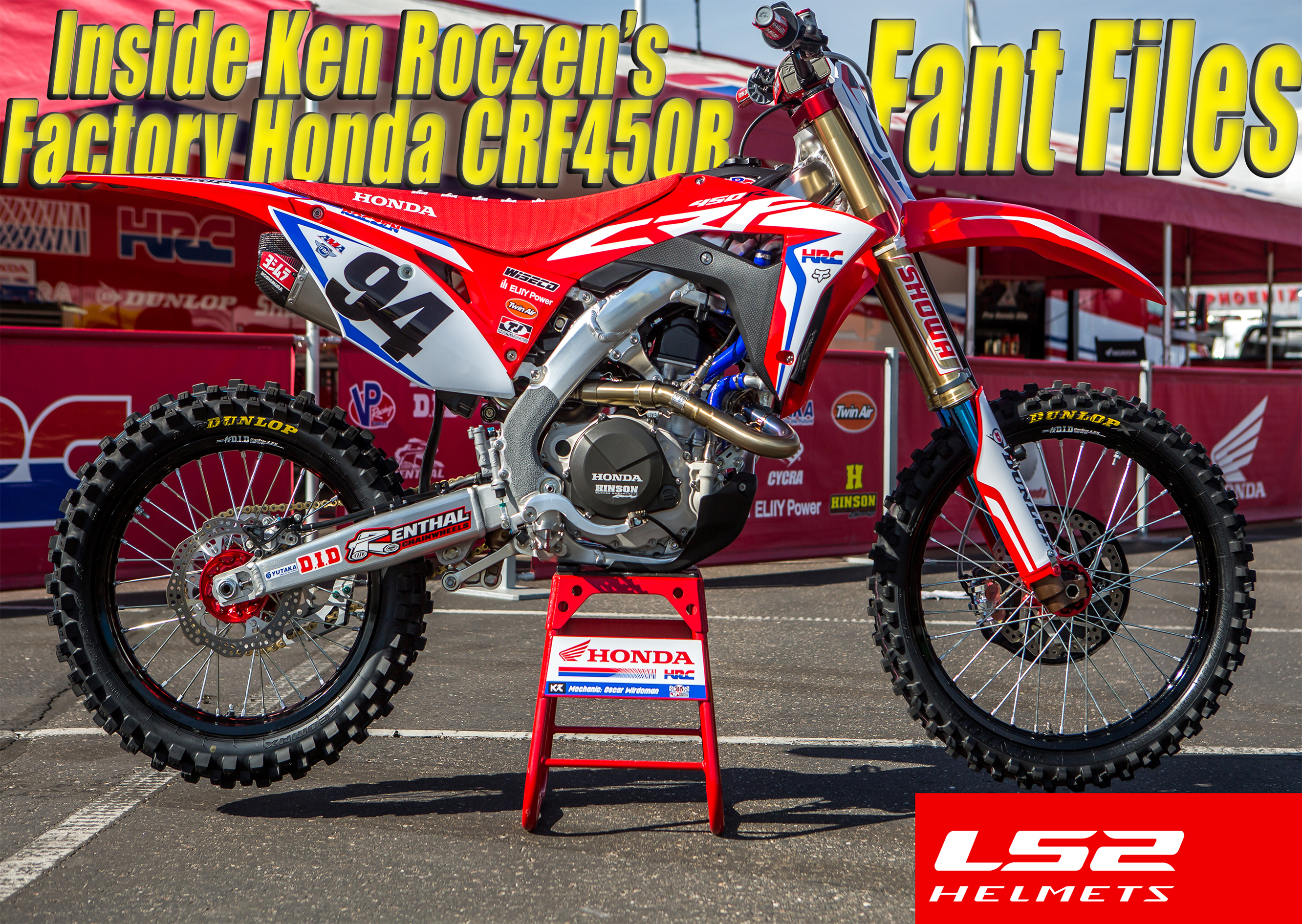 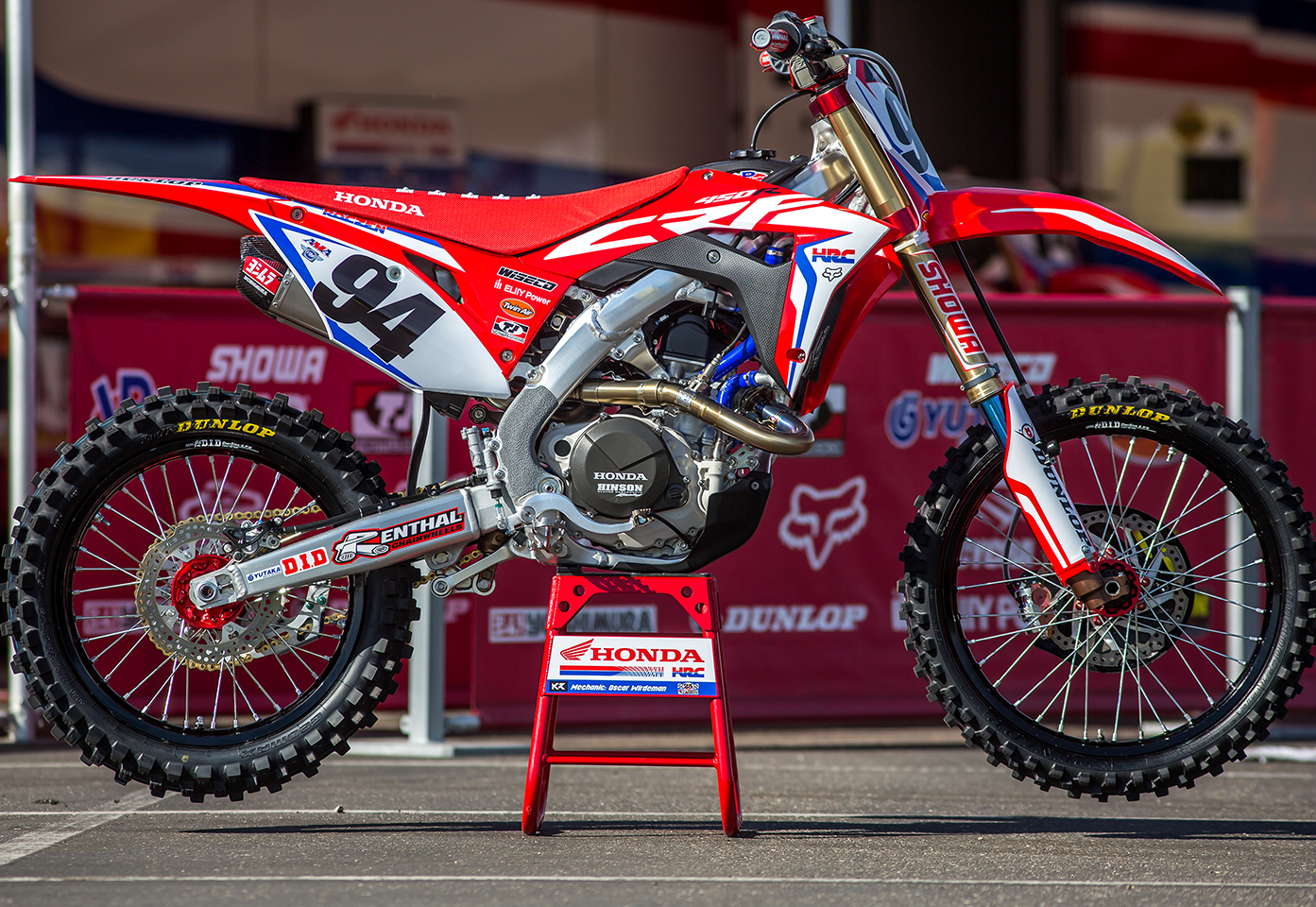 We got in the van and headed east from our offices in Valencia, California to Glendale, Arizona for Round 4 of the Monster Energy Supercross series. Mechanic Oscar Wirdeman was nice enough to walk us around Ken Roczen’s Honda CRF450R and show us some of the trick parts they’ve thrown on it. 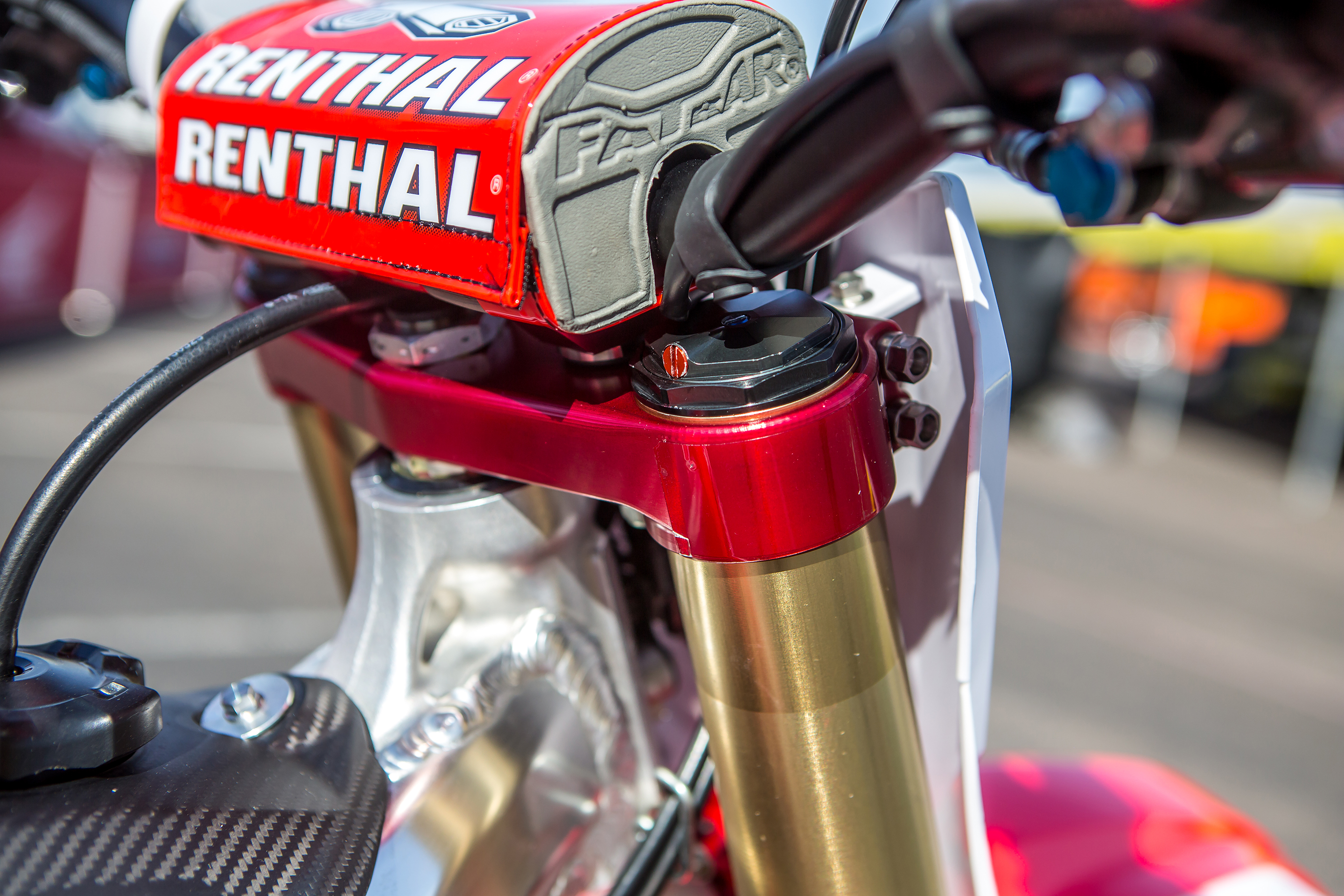 Up front Kenny is running WORKS triple clamps from HRC. He is also running a taller bend Renthal bar. 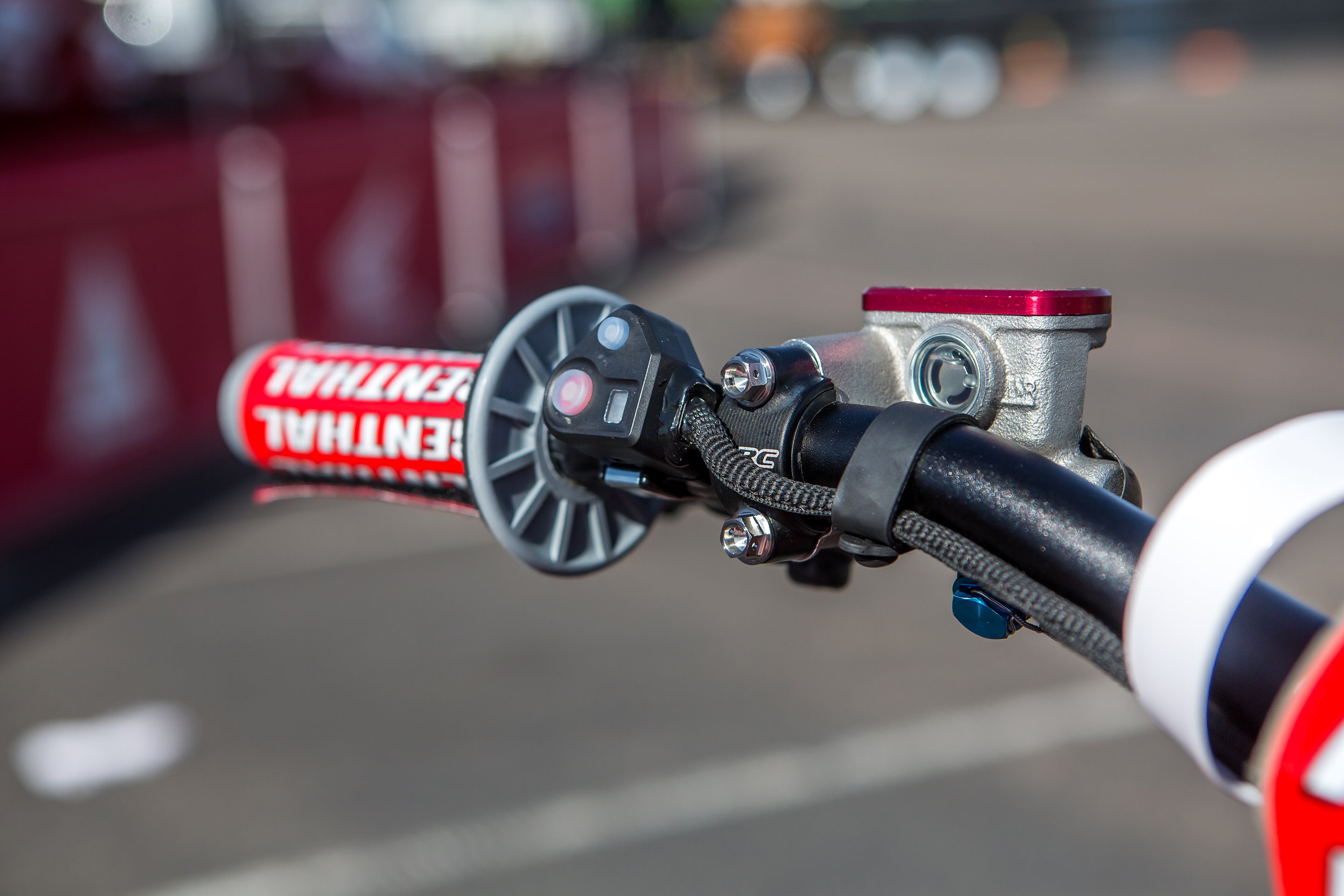 Roczen is running a Works hydraulic clutch on his CRF450. The map switch, wiring, ECU and harnesses for his bike are all works (HRC) components as well. 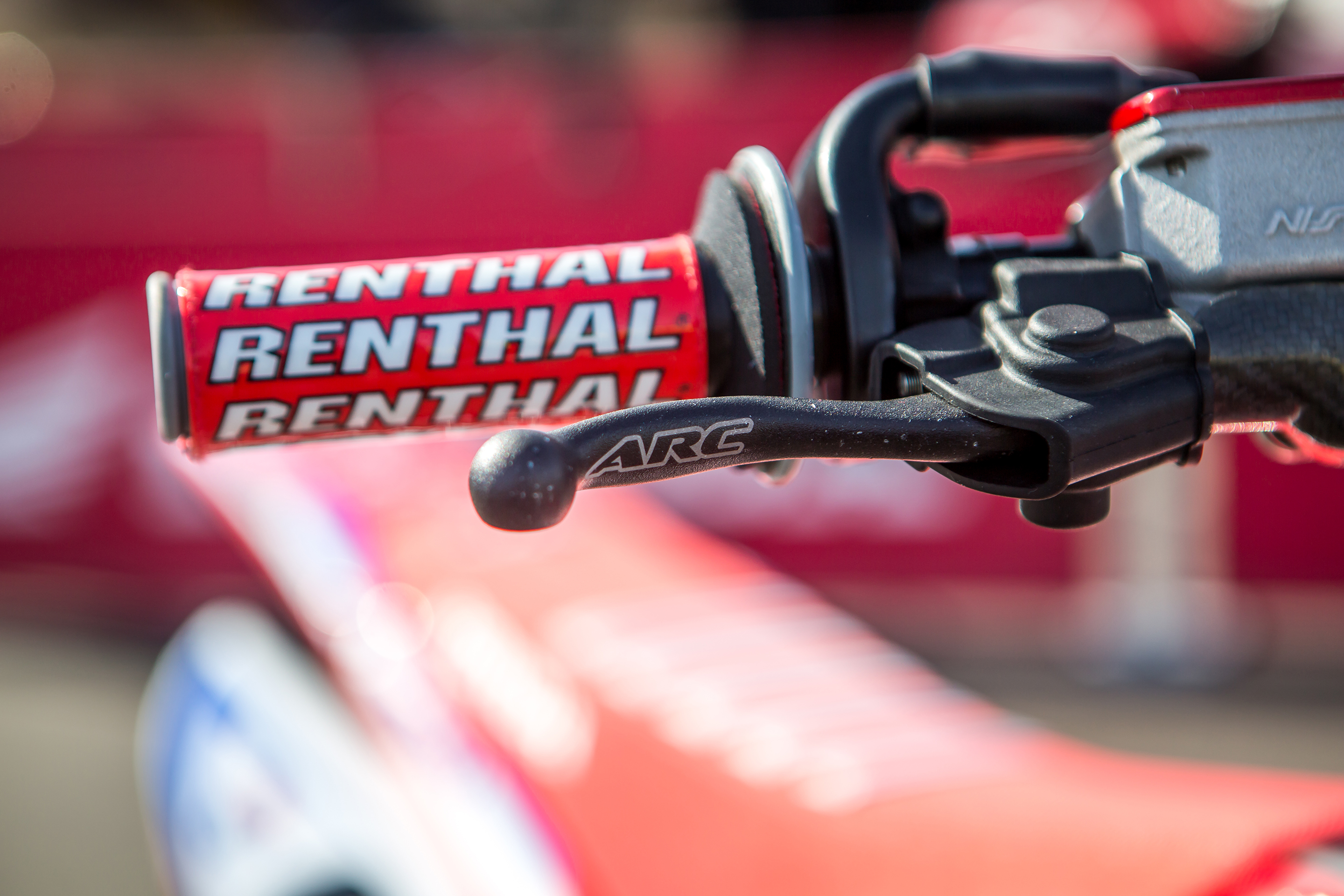 Roczen and Seely like to run their ARC front brake levers close to the handlebar. The distance between the bar and lever is very close. Oscar explained that both riders to have a strong pull on the front brake. Kenny’s Renthal grips are actually custom for him and his hand. His clutch position is always a little bit lower than his brake. 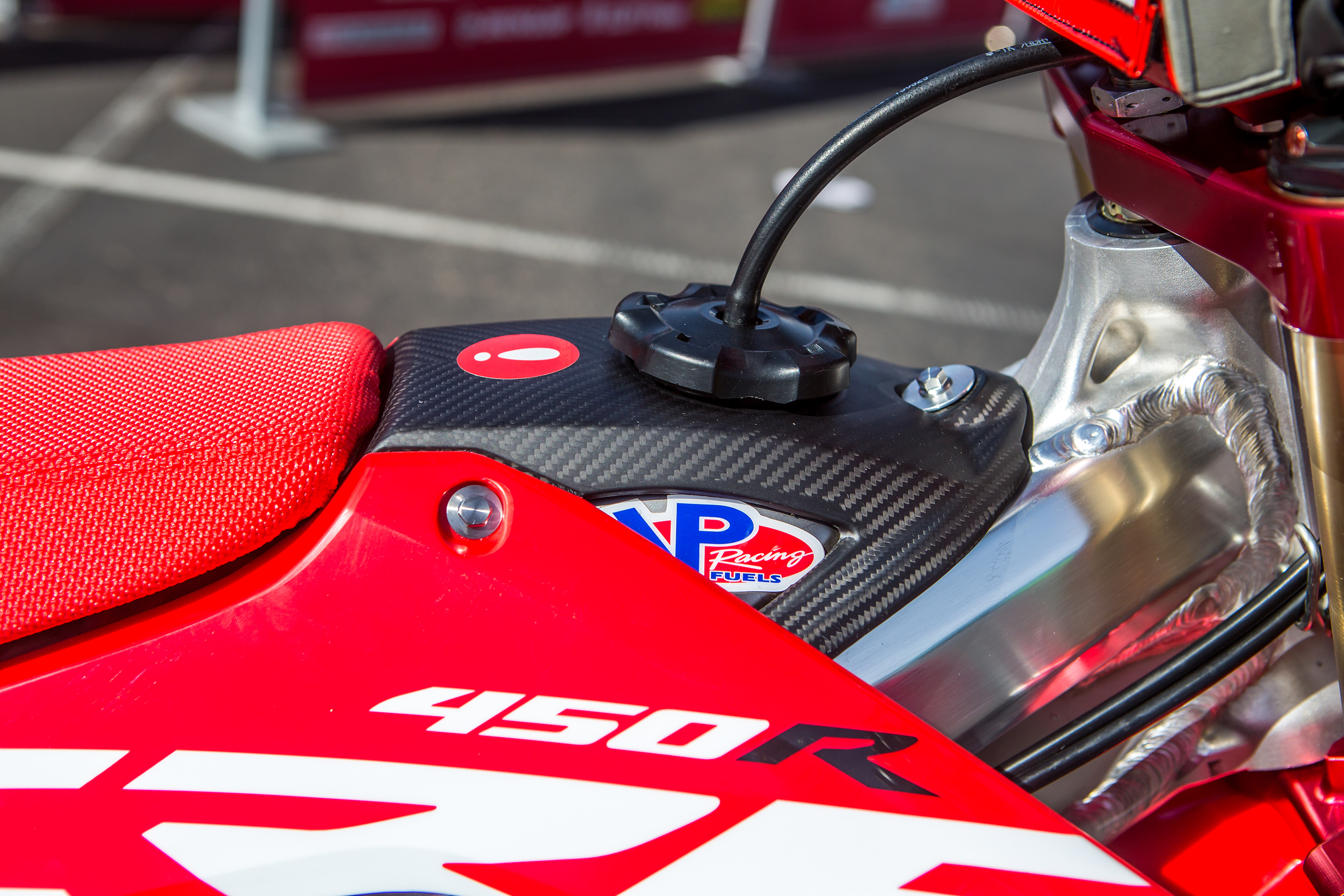 The fuel tank has been covered with a carbon cover for added protection and that factory look. 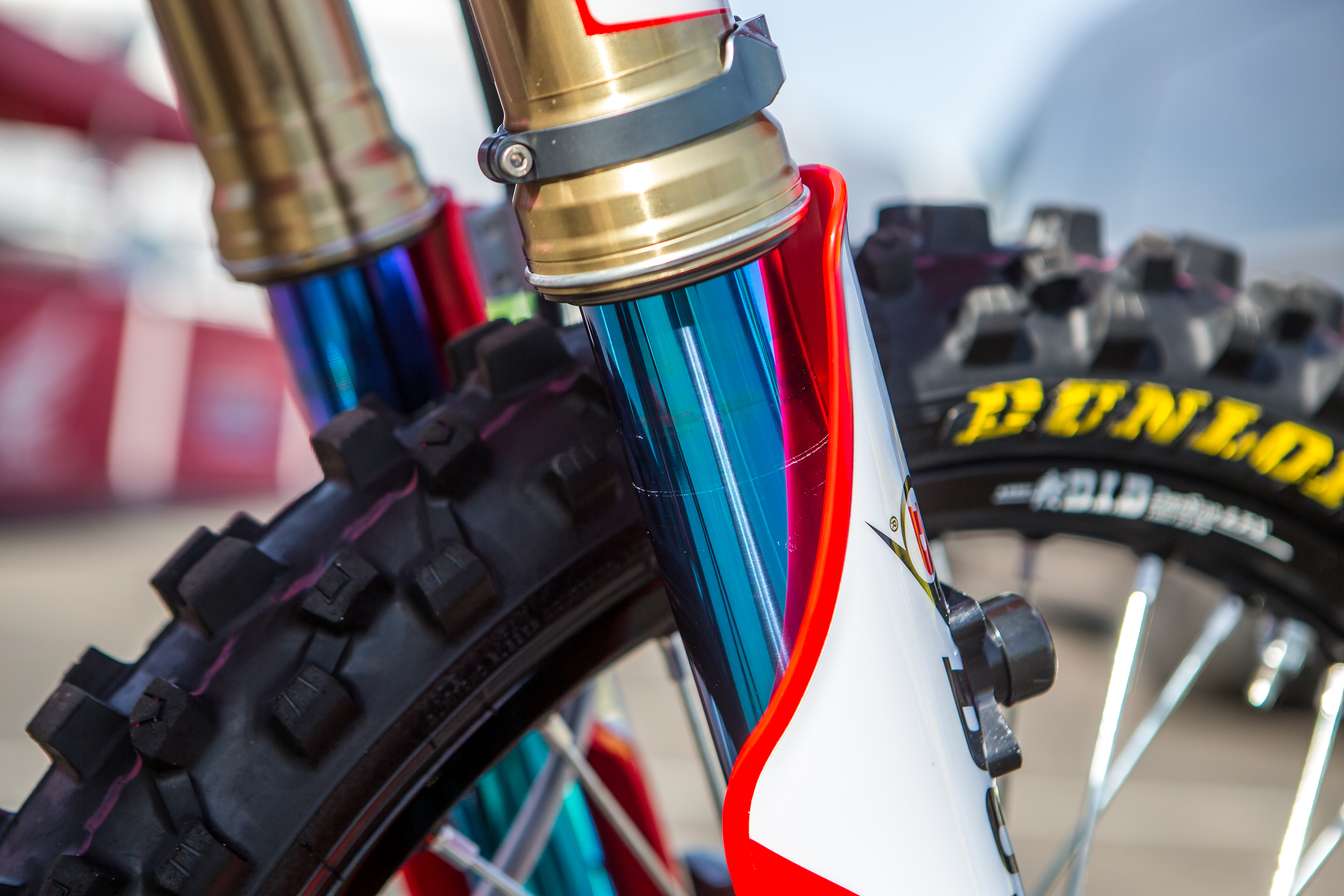 Showa provides the suspension on Roczen’s bike. We have noticed on other factory machines that riders are very particular on where they place their hole shot devices. KROC has his set very neutral and doesn’t have a secondary position like Eli Tomac has on his Kawasaki. Oscar explained that they have made some suspension changes to both the front and year in comparison to last year’s set up. 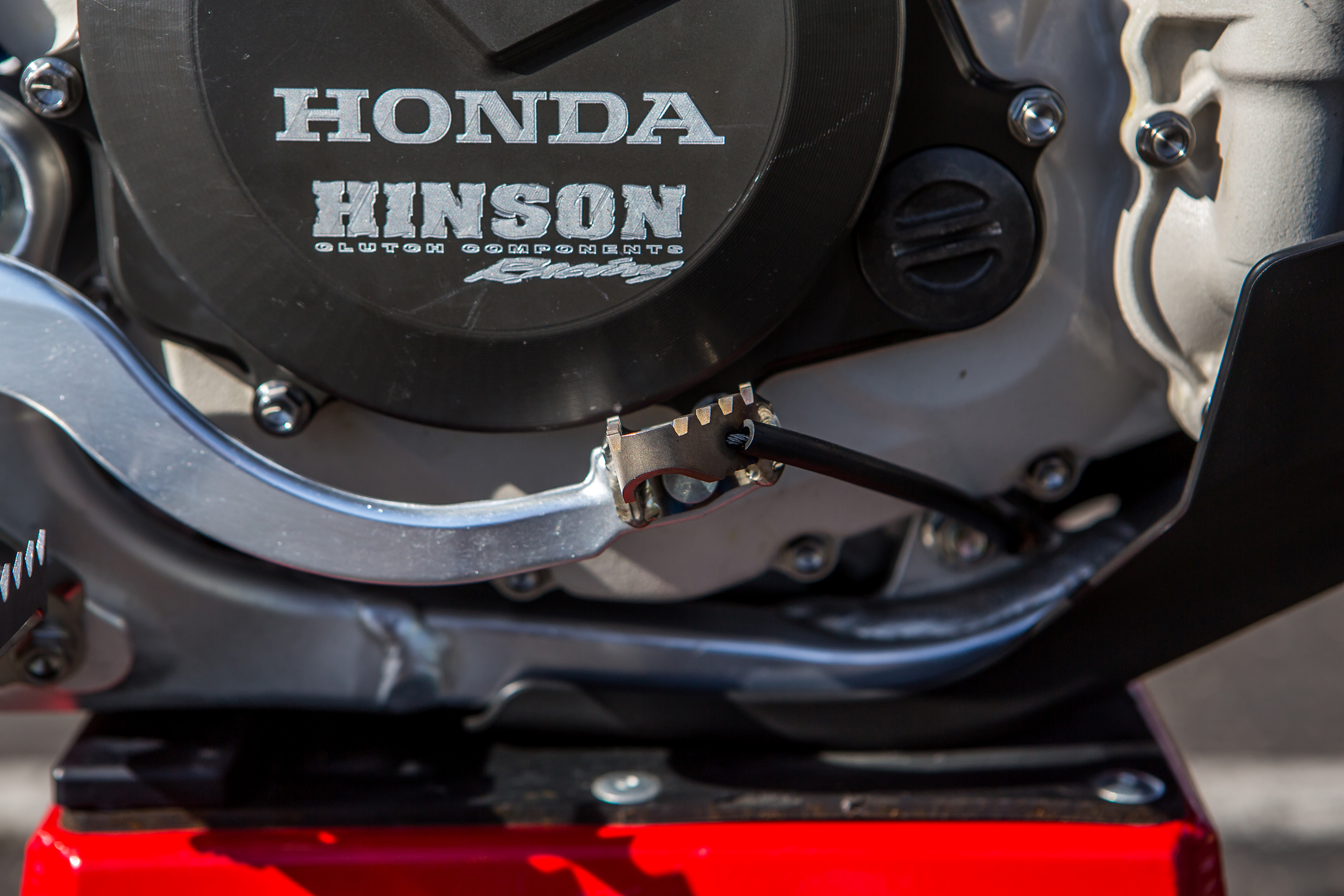 A very trick part on Kenny’s bike is the brake pedal. Yes its a works part but what’s even cooler is that they custom made this pedal to help Roczen place his foot under the pedal when he is throwing whips for his fans. There are notched marks similar to the top of the pedal so Ken can hook his foot to his while the bike is sideways. 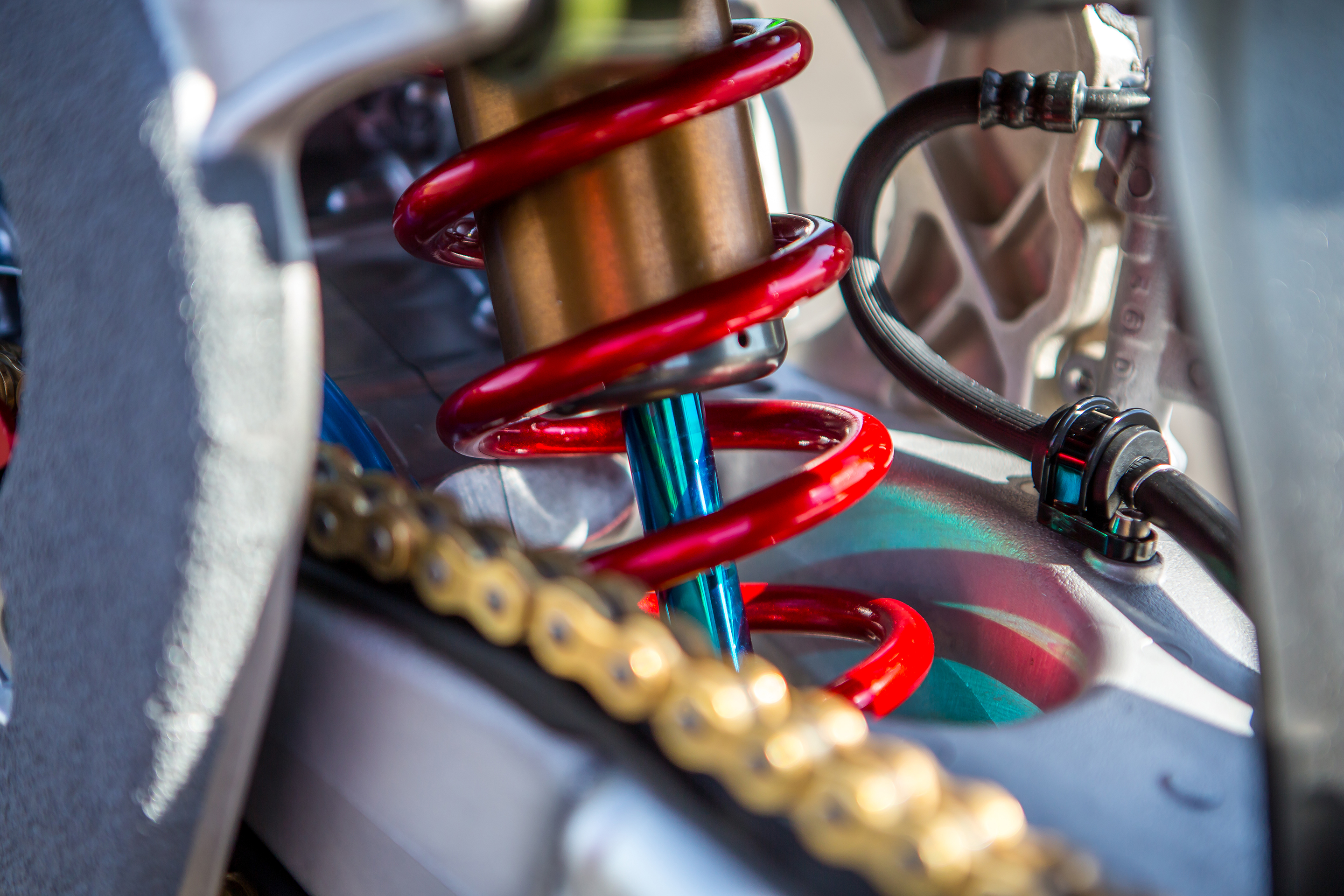 Out back you’ll find a trick looking Showa shock that Roczen runs. There are several teams now running this RED coil on their bikes for some extra eye candy. 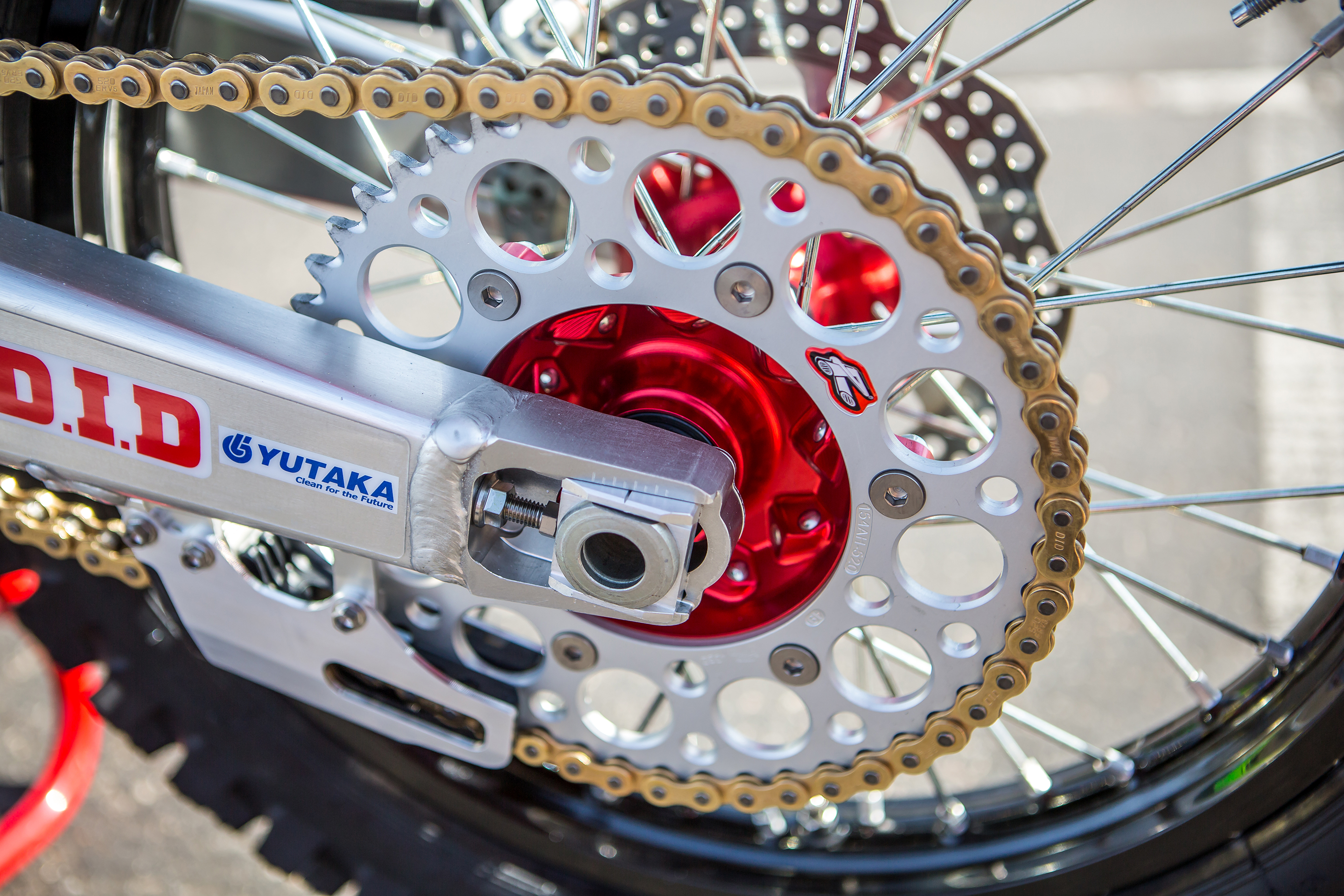 Roczen is running Renthal sprockets and typically keeps to one gearing choice all season. Oscar explained that the only times they will make changes to gearing is with elevation change or a unique track design like Daytona. Another works part on Roczen’s 450 is the shifter. The shifter is made by HRC. Notice the etched numbers in the shifter. HRC handles the trick anodized covers on top of the hydraulic clutch assembly. These carbon guards are for possible impact from rocks and debris while racing. All the factory teams this year have added more protection to the motorcycles to prevent malfunctions during racing. 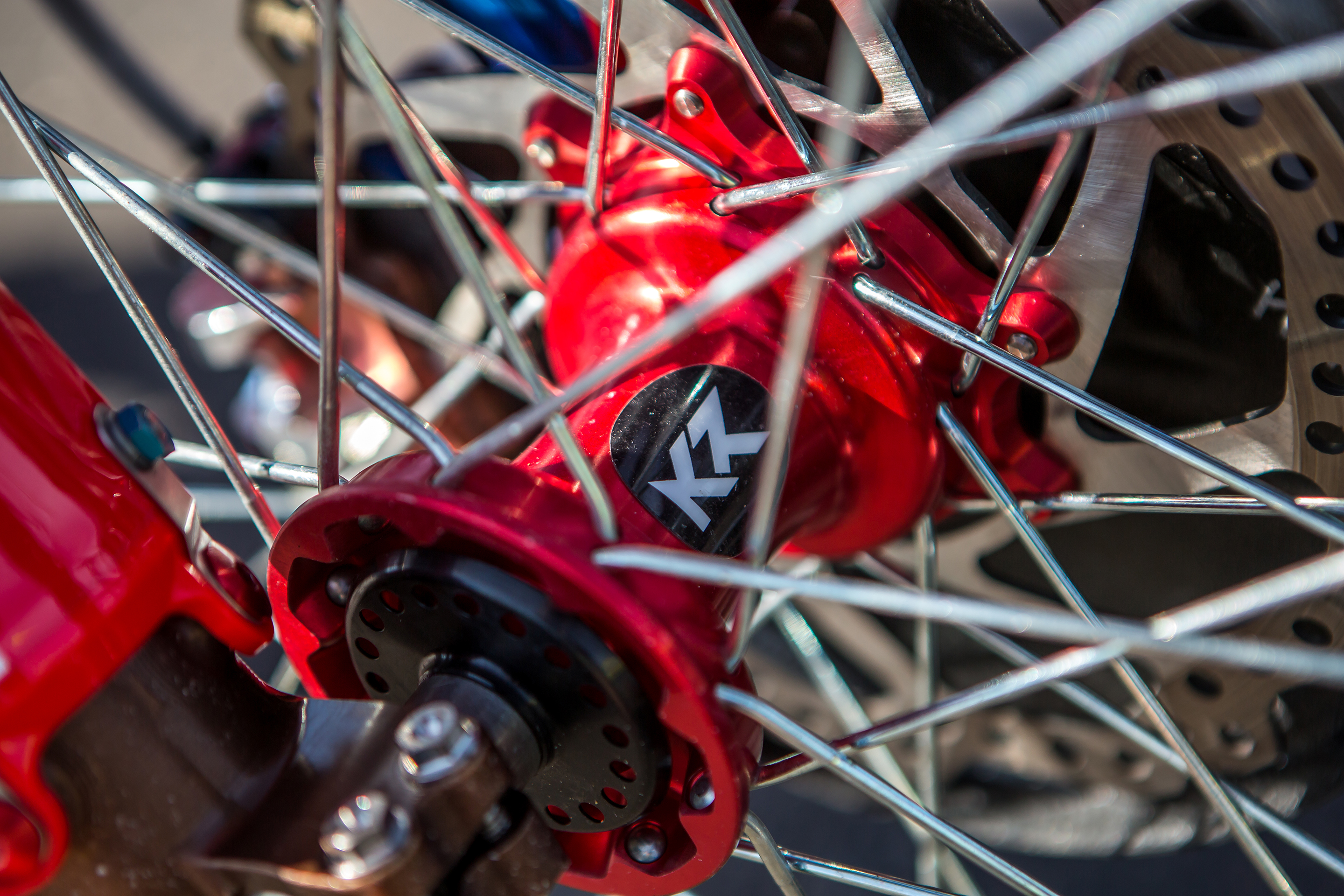 No factory bike would be complete without its rider’s name or number on the factory hubs. Along with trick hubs DID takes care of their rims. 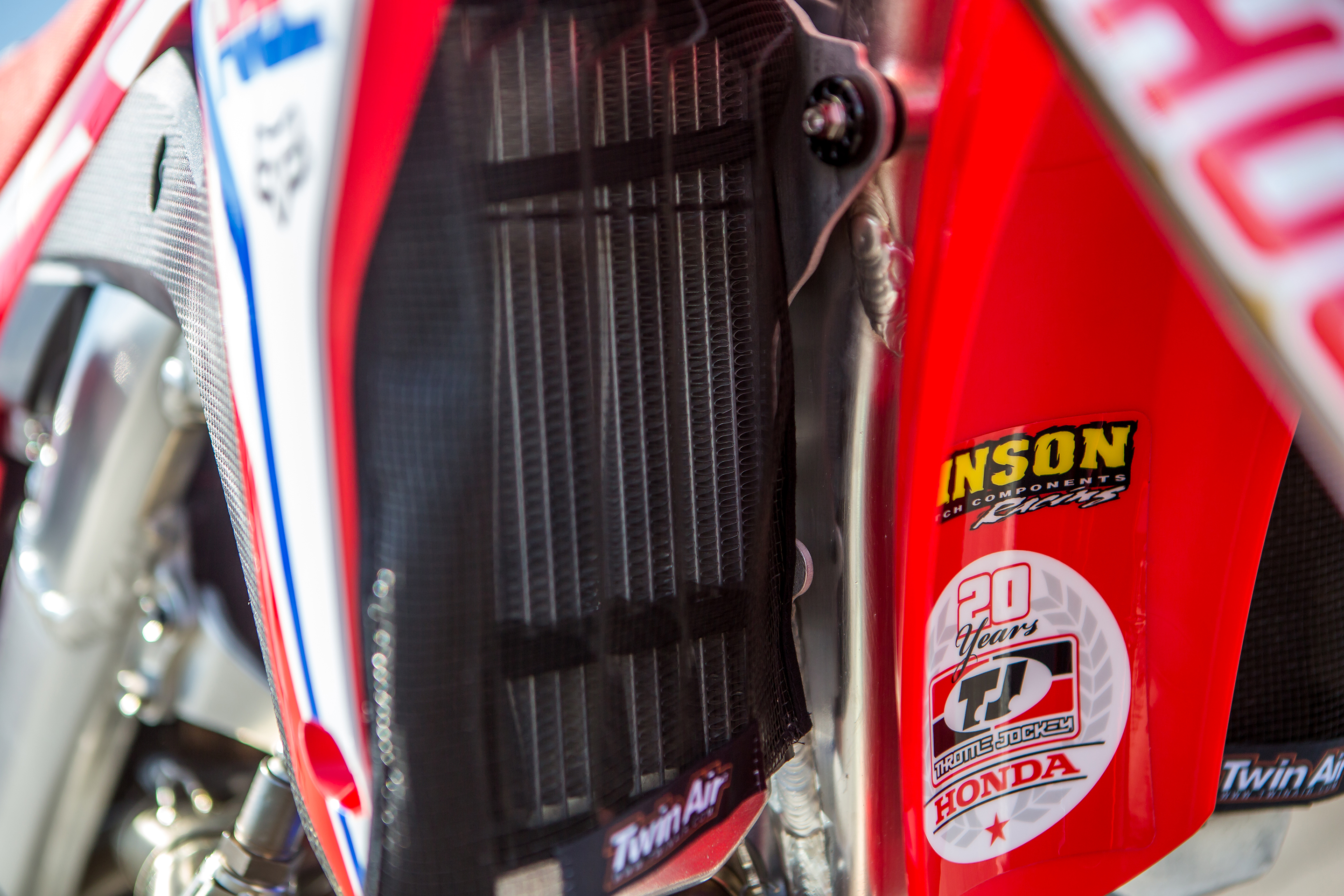 Twin Air supplies these protective guards to deflect any debris from damaging the works radiators that are on Ken’s bike. Obviously Yoshimura supplies the exhaust but what in the heck is the spout in the middle of the header pipe? This is data acquisition for the Honda Factory team. It is an O2 sensor. The more information teams can gather on their race bikes under full race conditions the better. All the blue coolant hoses are provided by Samco. The HRC bikes are littered with works parts and this is just another piece to that puzzle. Works foot pegs that are actually sharpened and tailored to keep Ken locked in at the feet while he is squeezing the bike. 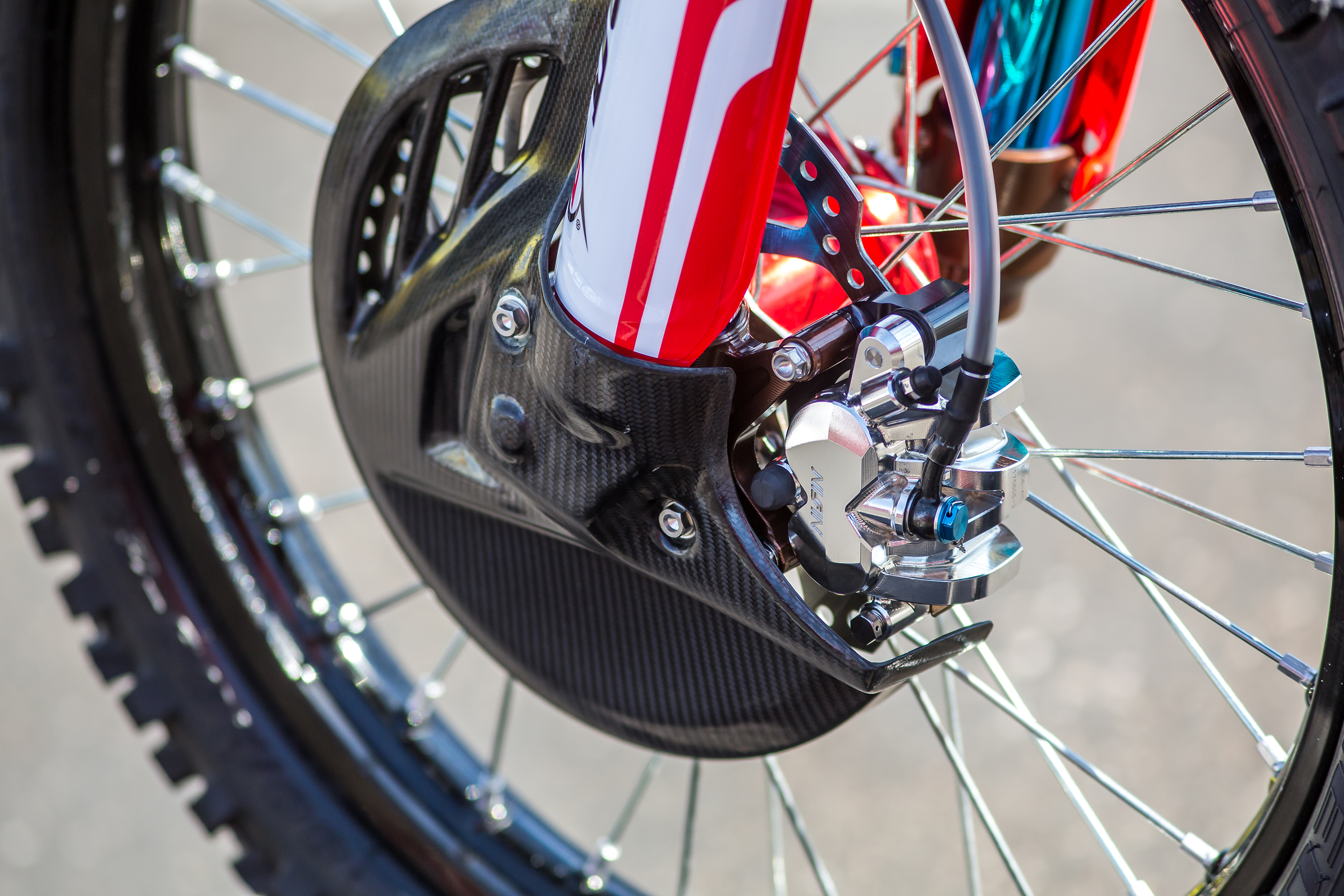 Up front Ken’s over sized rotor is protected by a carbon guard. Notice the works Nissin brake caliper. Yutaka provides the rotors to HRC. Kenny’s bike is protected on the under side of the motorcycle by a stock skid plate. A works skid plate is actually on the way for the HRC team. Notice with the works counter sprocket cover. Another set of works components is the linkage. This caught our eye late into the day shooting Ken’s bike. A secondary starter is added to the bike in the event of damage to the main start button on the handlebars. To help further keep Roczen in place is some grip tape that is added to the frame. Also a works Nissin rear master cyclinder and stock brake lines appear in this photo. On the rear master cylinder also notice there is no window. Hinson provides the clutches to Ken and Cole on HRC. They can make changes if the riders need or have a preference in the way it engages. The factory motor of HRC is something you can lose track of while admiring. Oscar explained the the hangers or “head stays” can be changed to switch up the flex characteristics of the chassis for their riders. You can see in this photo just some of the titanium they use on Ken’s bike.