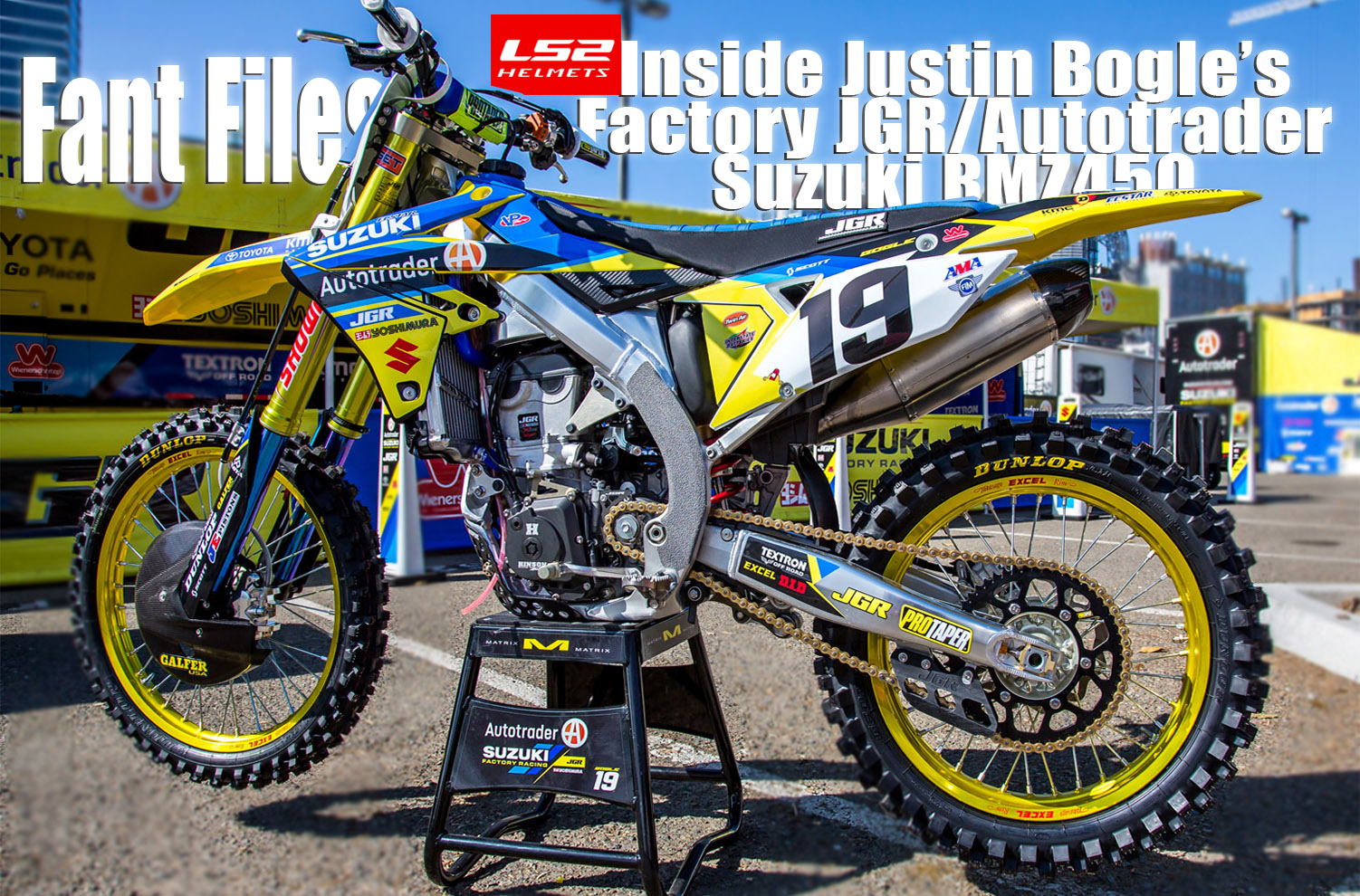 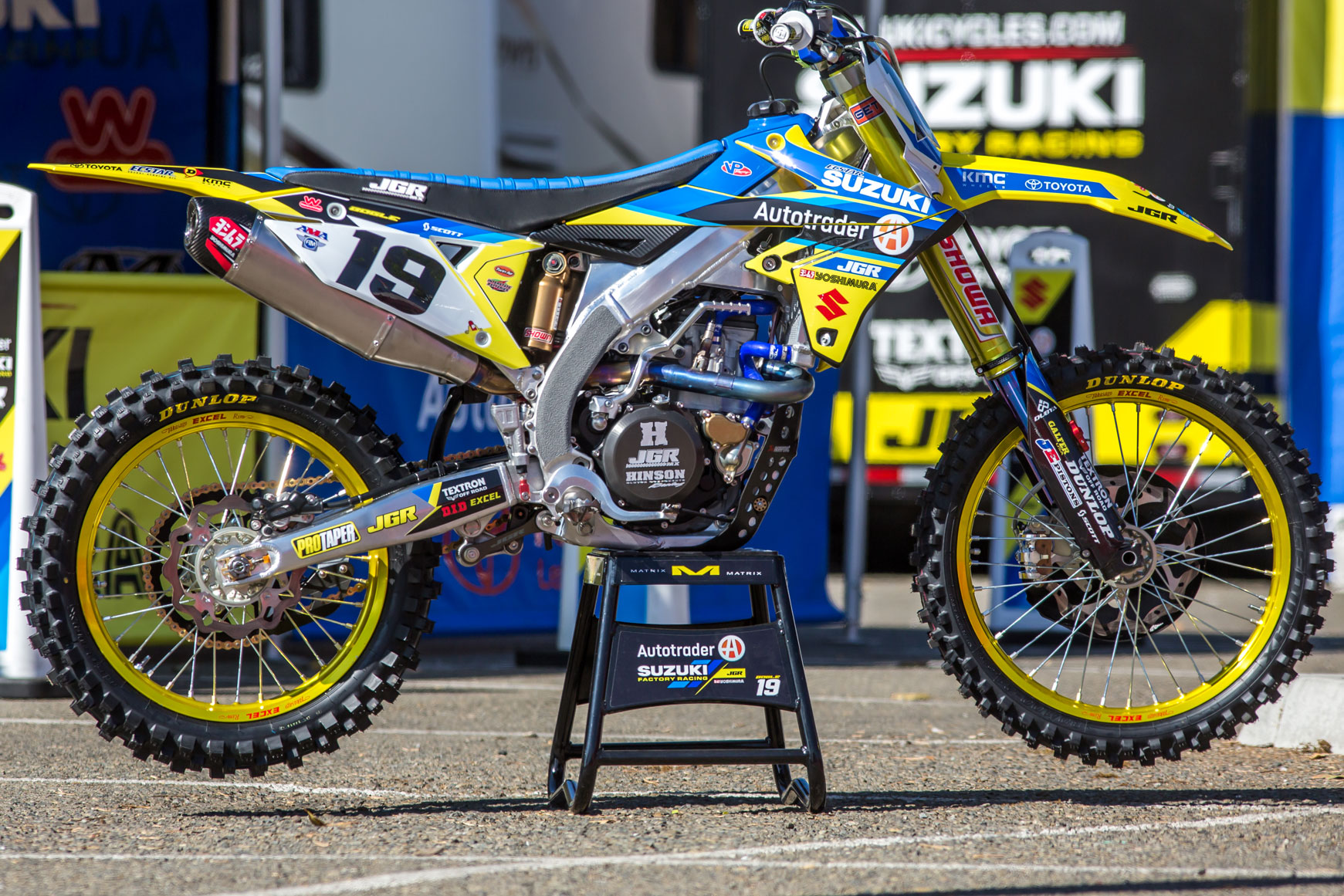 There isn’t a team that we get more excited to look over what they’ve done to their race bikes. JGR/Autotrader/Yoshimura Suzuki is a full factory organization and the parts they put on their bikes are absolutely trick. Mechanic Ben Schiermeyer (@sheetmetal220) was nice enough to walk us through Justin Bogle’s machine and all the unique parts they have chosen to run this season. 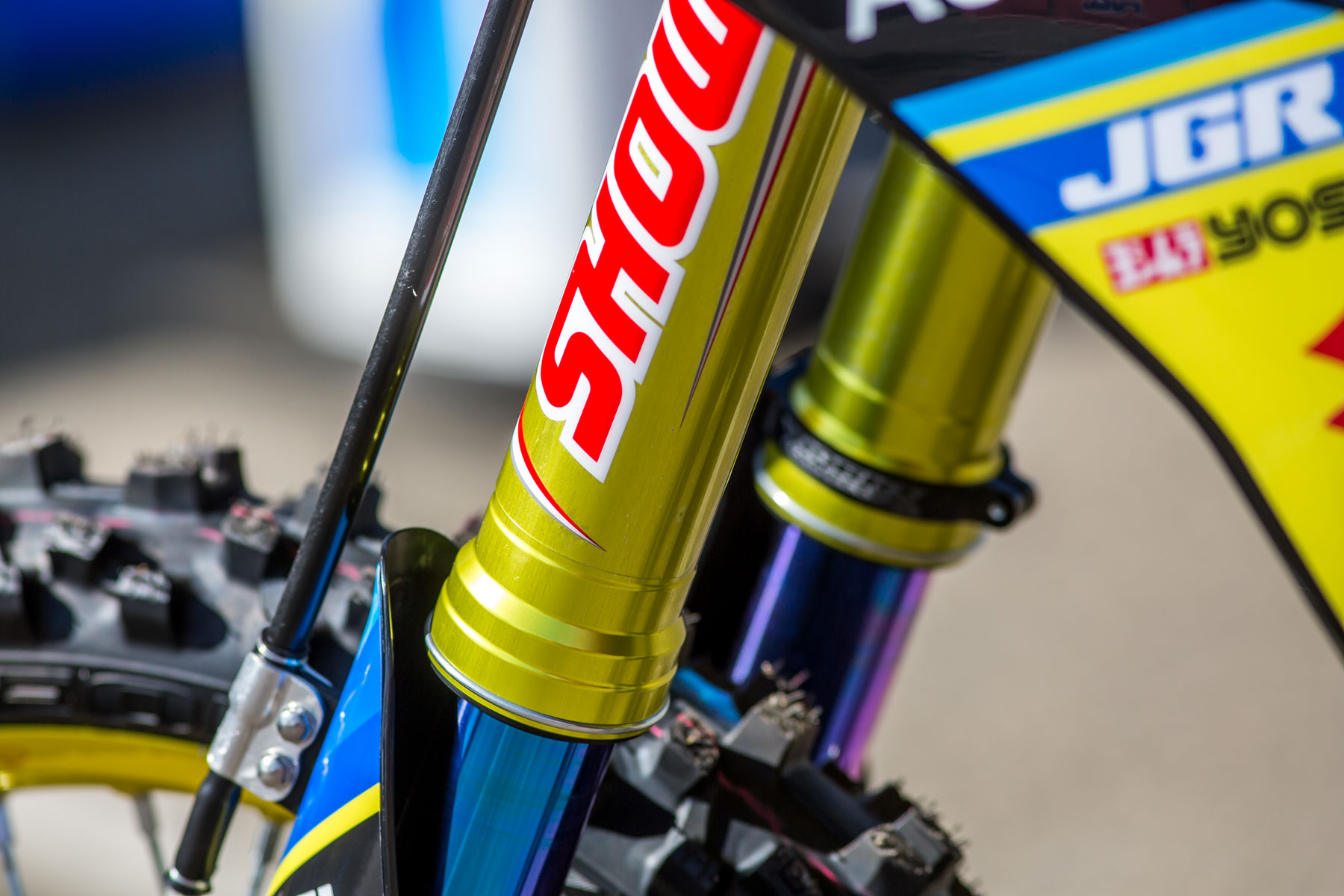 Up front on the motorcycle you will find a SHOWA Hybrid fork and set to Justin’s liking. The blue coated lower tubes adds to the overall factory look of the bike. 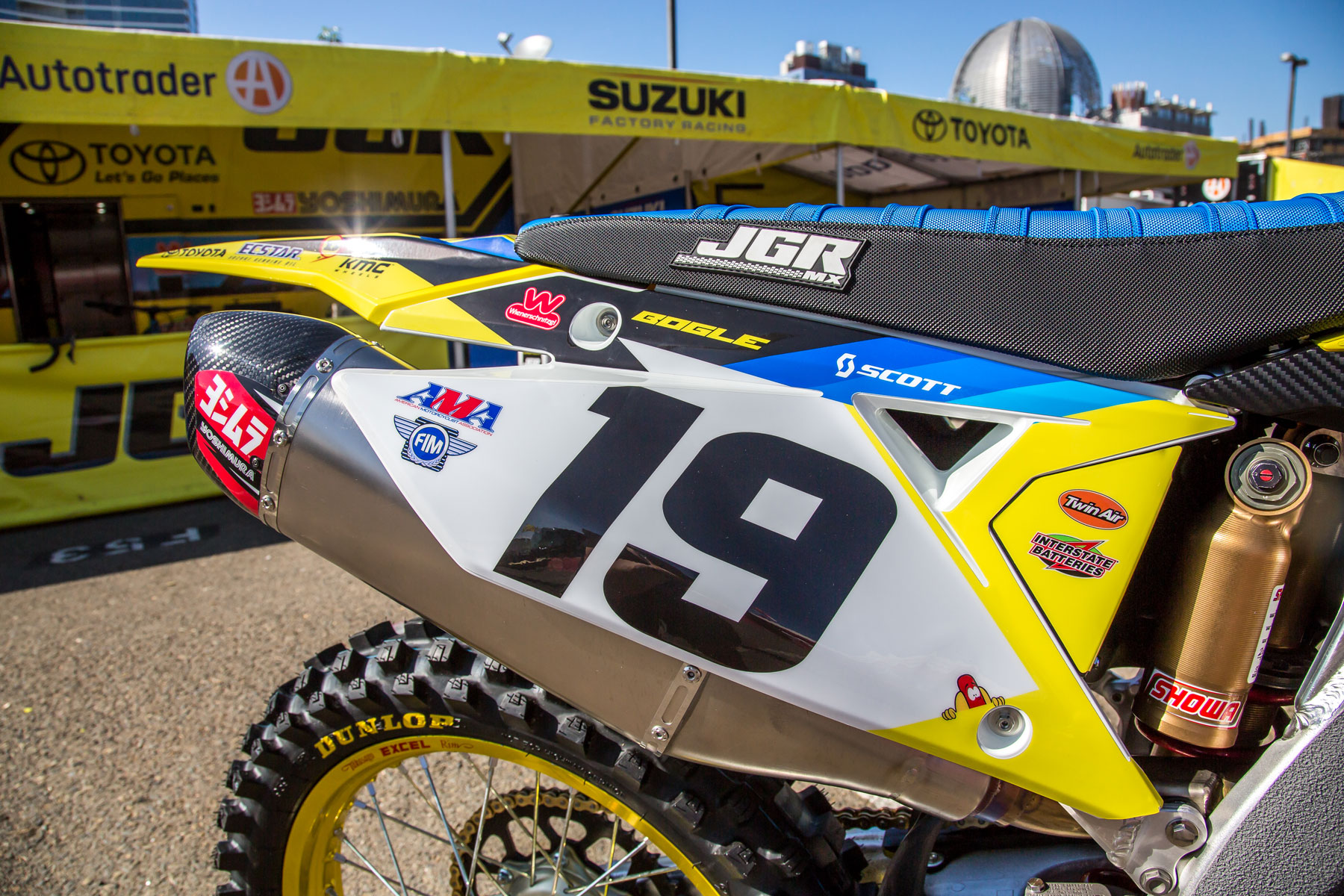 Out back Yoshimura exhaust is mounted to the RMZ. Yoshimura develops a system to compliment all the hard work and testing JGR has done to make this bike very competitive in supercross. 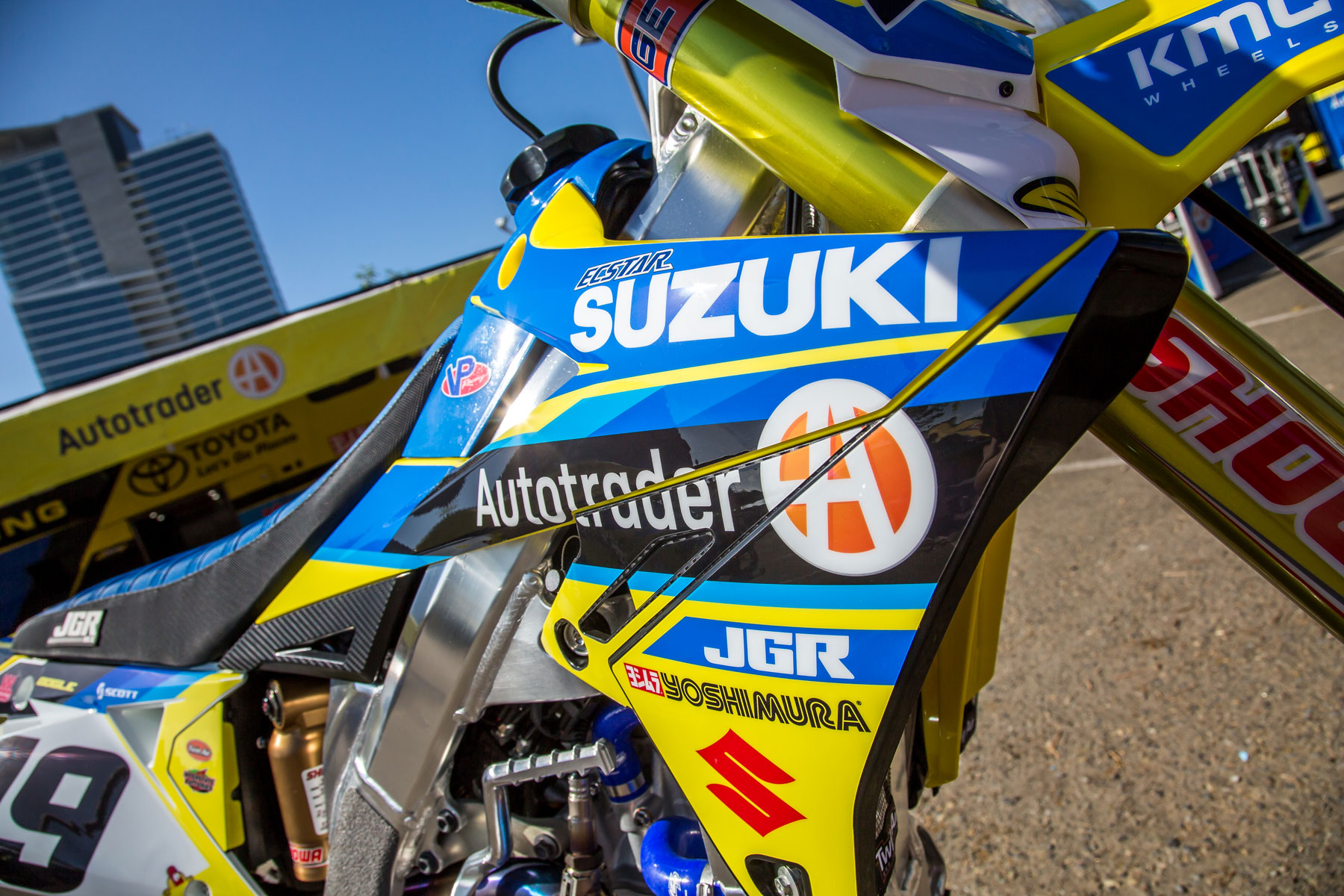 If you are wondering who does the graphics and color scheme for JGR, it is a company called Armored Graphix. Ben explained that these are some of the easiest to work with and most durable graphics they have used at JGR. JGR actually offers these graphics to the public for sale. 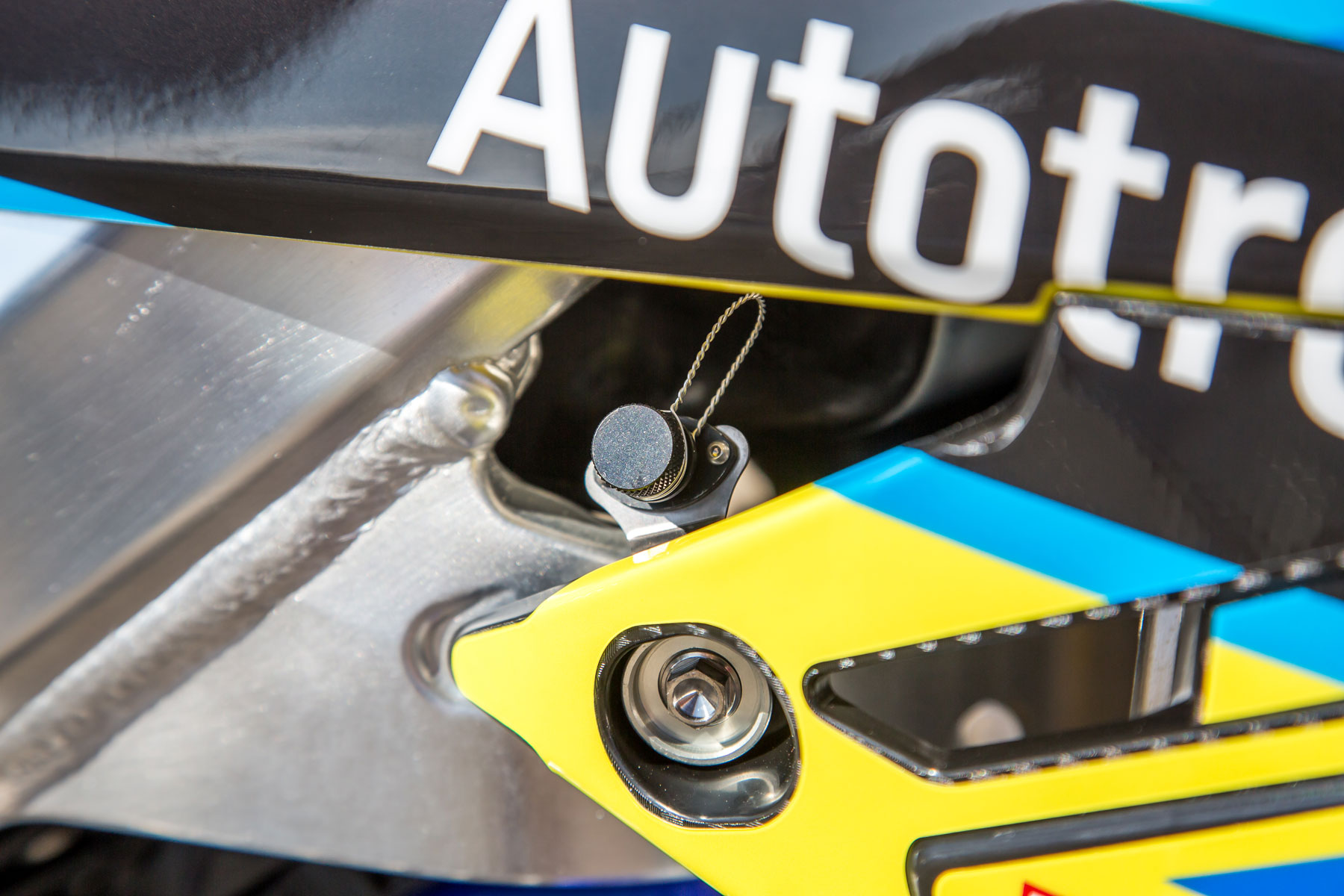 An interesting piece to Justin’s bike and all the JGR Suzukis is this little device here. Data collection is on the bike and running all the time. JGR collects all the data from the bike and this is where they connect to pull that data. Most of the GET data collection system and wires sit under the seat to make it more organized and cleaner than in years previous. 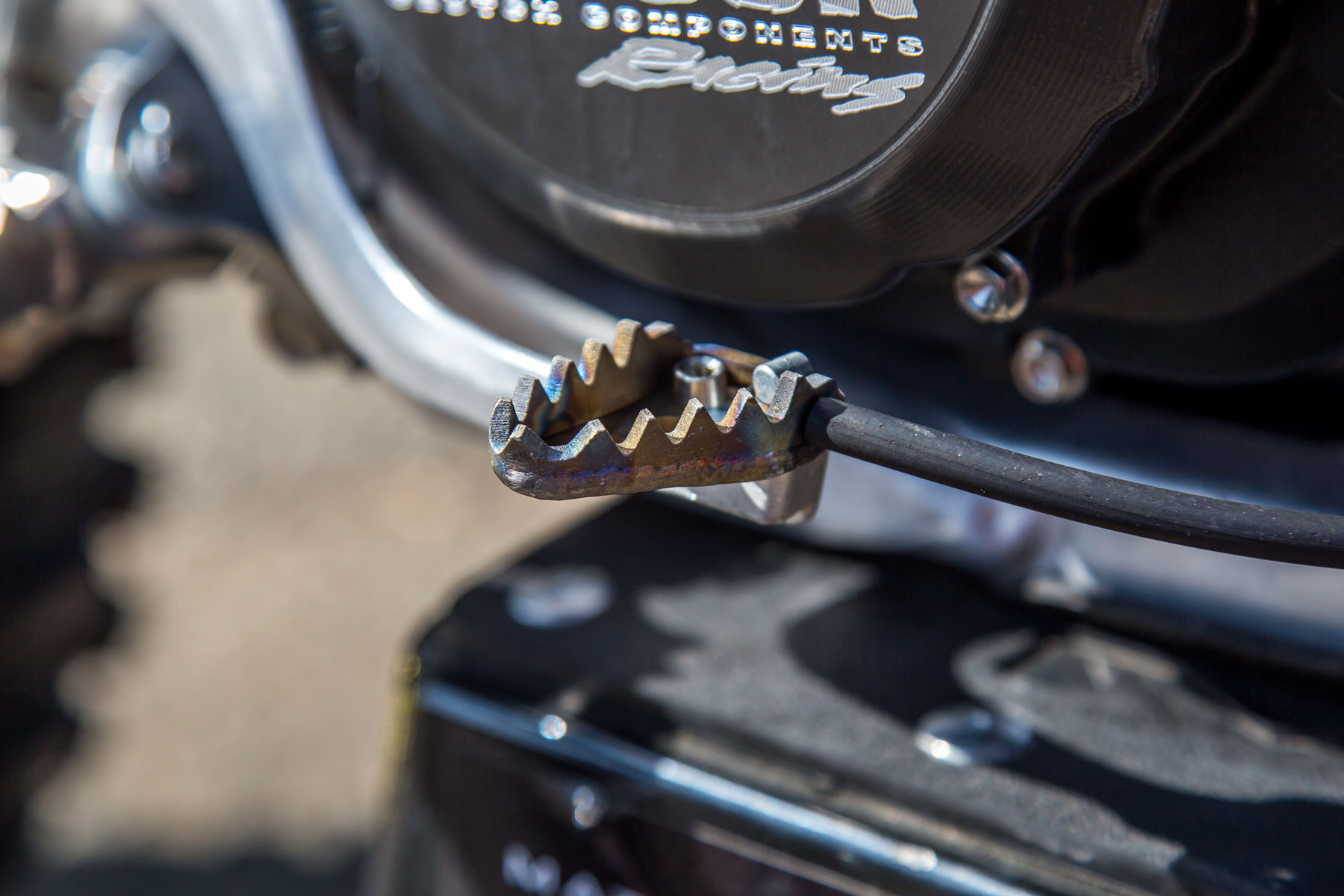 Another unique part on Justin’s bike is the brake tip. Similar to a lot of the parts on his bike, this brake tip actually comes straight from Japan and is a works part. 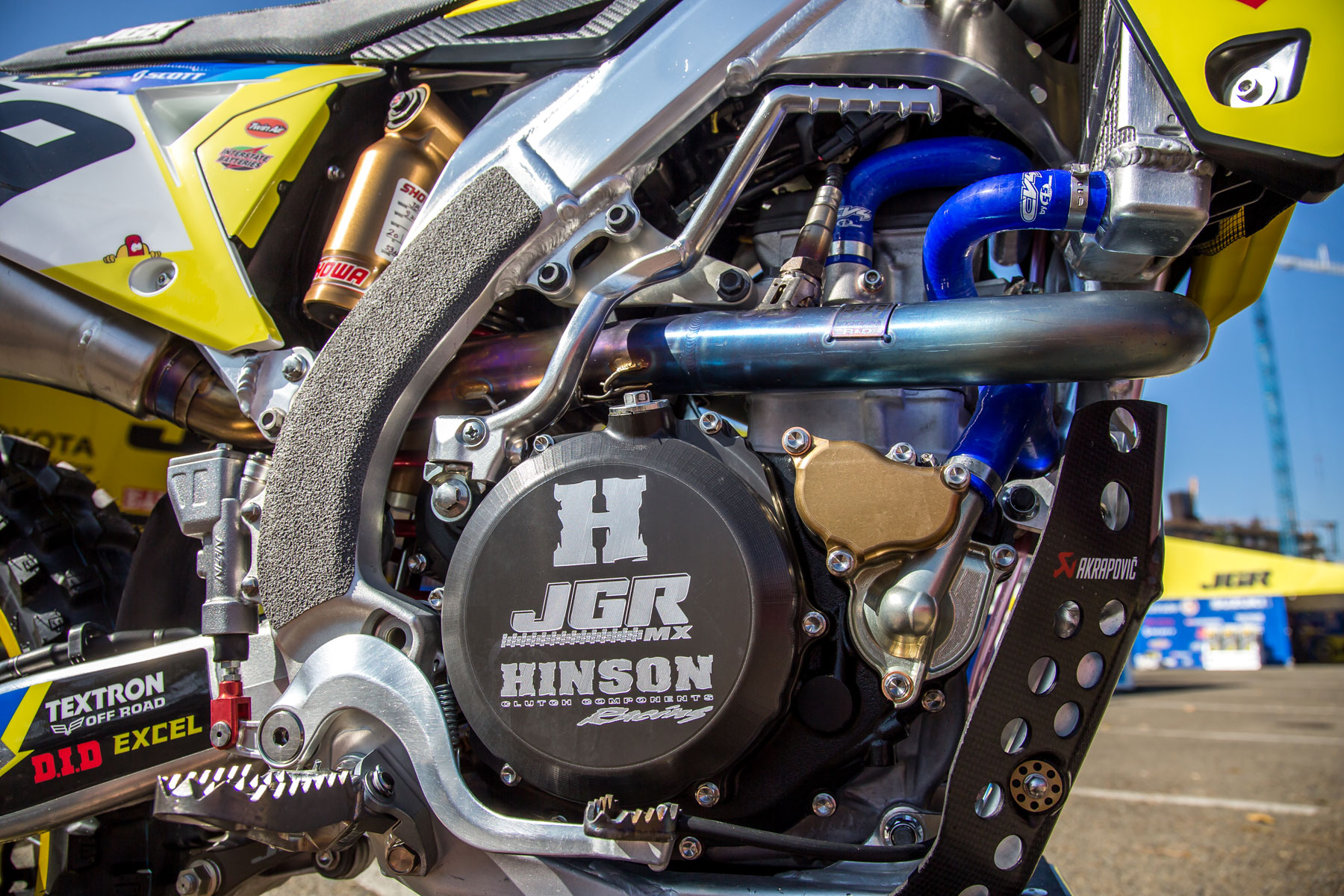 All the engines are done in house at JGR in North Carolina. Ben explained that the resources the team has in house allows them to test and create parts for the bike very efficiently. An array of titanium and aluminum factory components from Japan are littered on the motorcycle. The entire 450 team can make changes to the motor to better suit their riding styles. This year all 3 of their riders are on a very similar engine package. 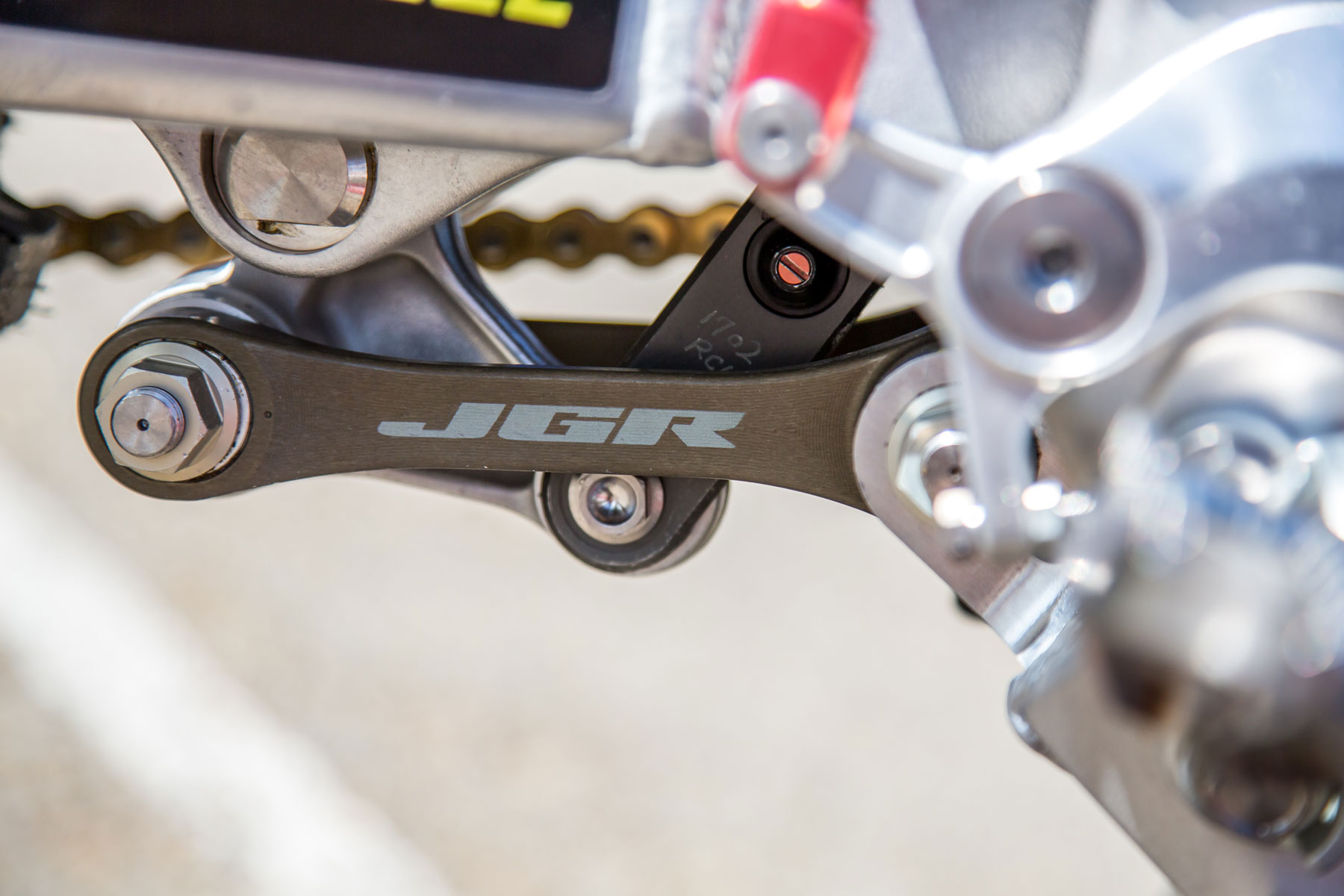 JGR makes an adjustable pull rod with 4mm of adjustment. There are a good amount of parts on the bike that JGR sells to the public. This is one of those parts. They actually sell an adjustable pull rod for Yamaha, Suzuki, and Honda. Ben explained that anything JGR makes in house they try to sell to the public. Some of it may be very pricey but they still want to offer it to riders for purchase. 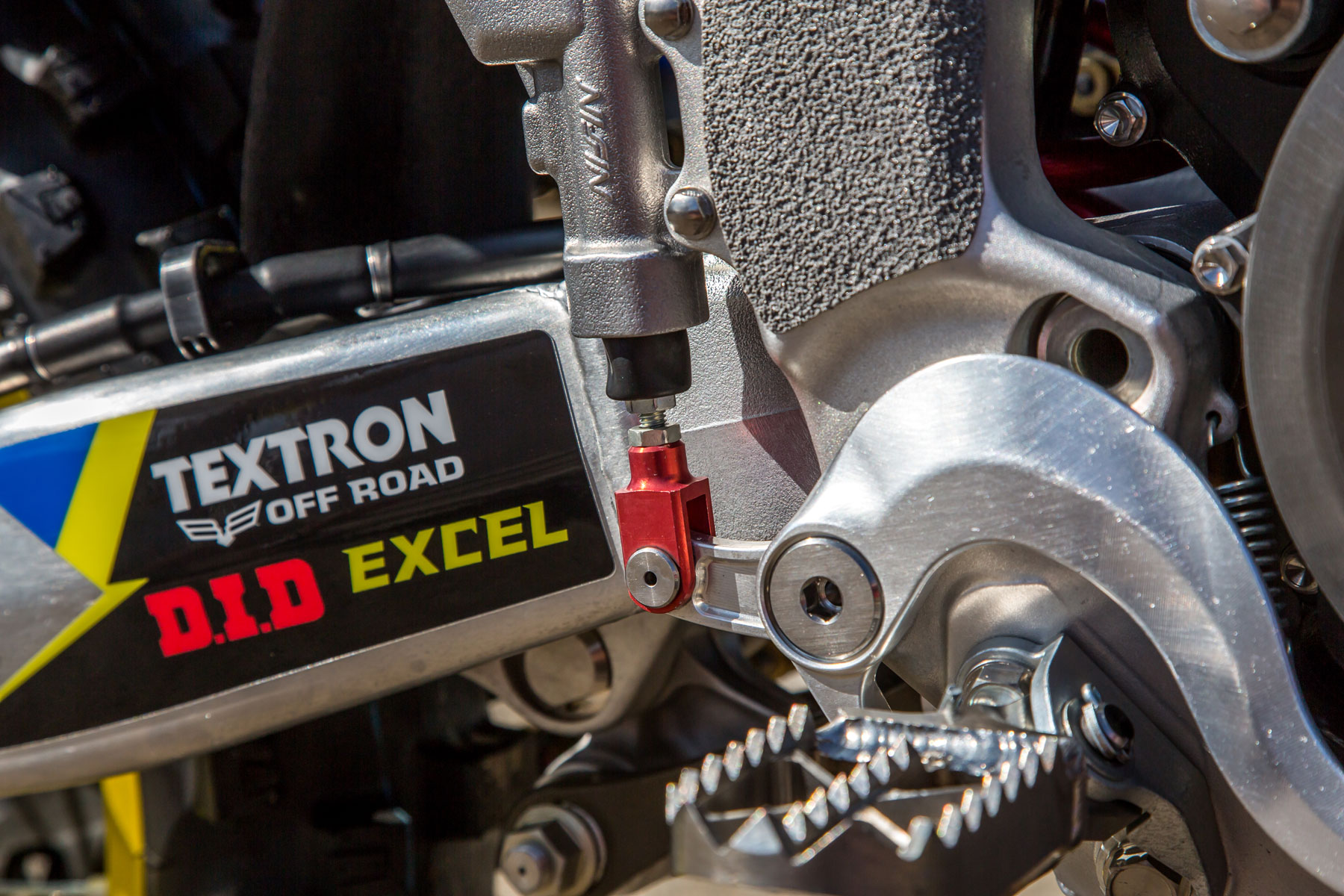 Another factory part sent from Japan is the rear brake clevace and brake pedal.The rear caliper is stock with titanium pins and piston. 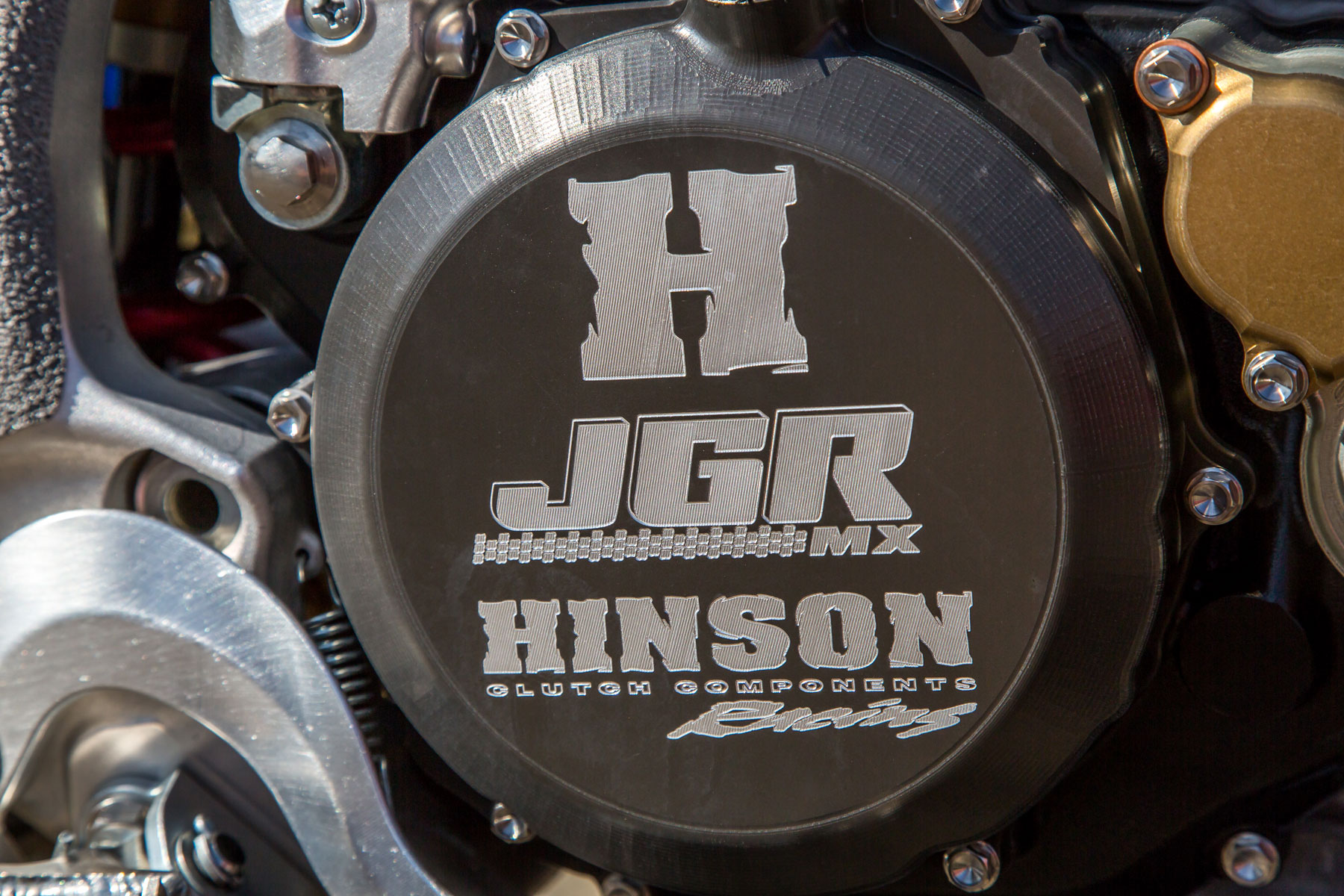 Hinson provides the ignition cover, clutch cover, and clutch components to all of JGR. Here is a trick JGR/Hinson collab cover on Justin’s bike. This is actually another item you can purchase from JGR. 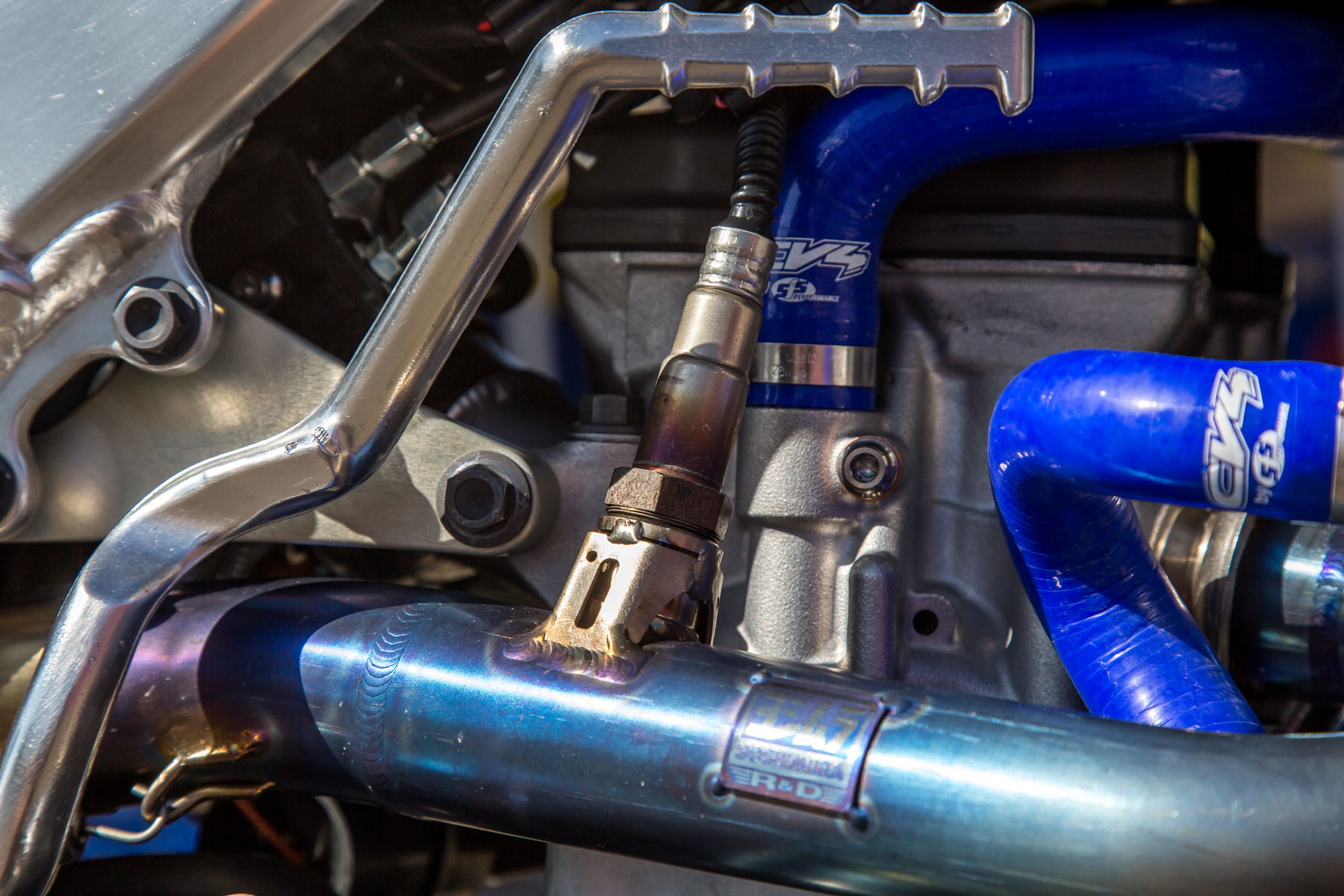 A key component to the data collection that JGR performs is the O2 sensor shown here. Ben explained without this that the data they collect would simply just be a bunch of numbers. With this sensor they can get more accurate information on what the bike is doing. Note the Yoshimura header in blue and matchng CV4 hoses. 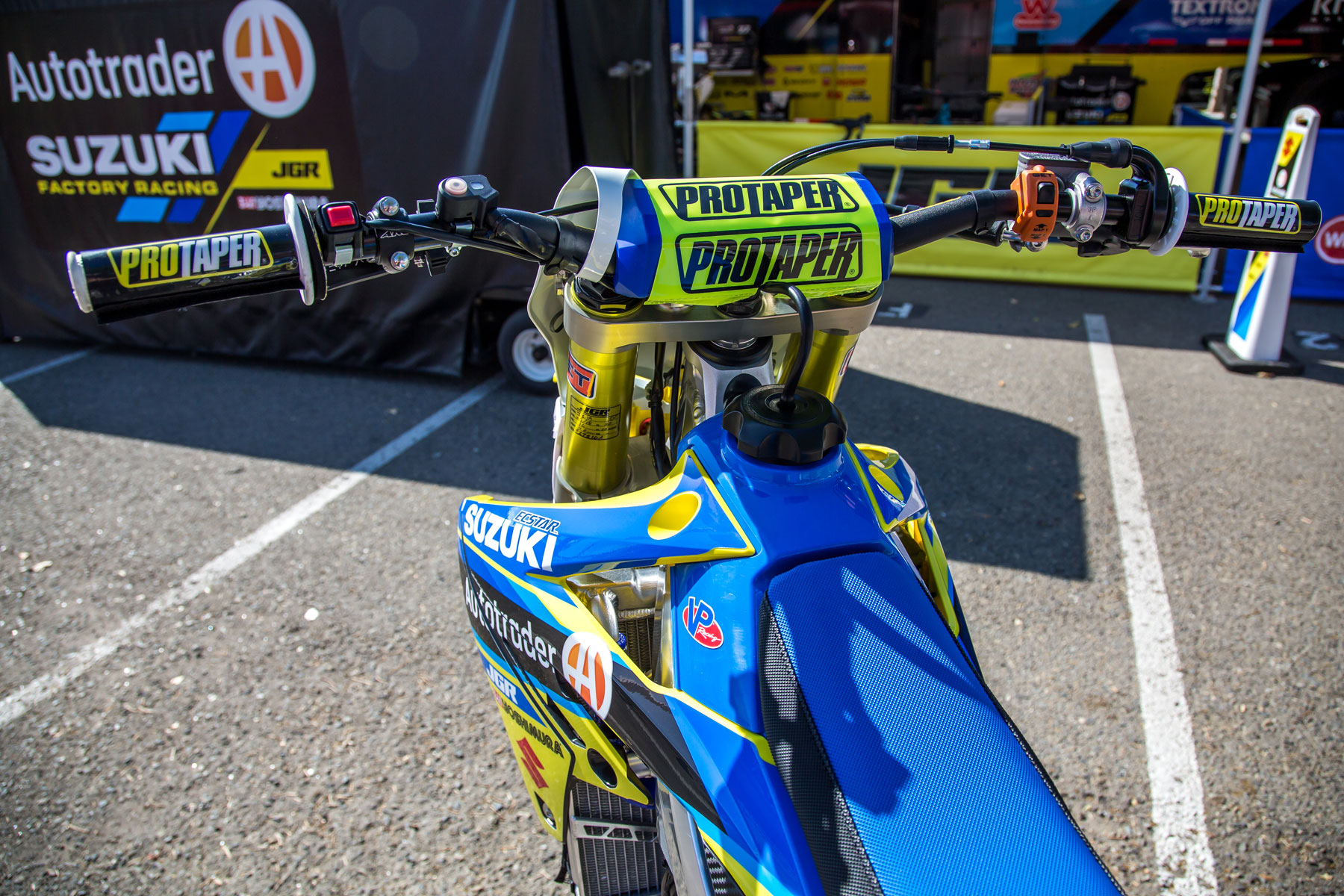 Pro Taper supplies the grips & handlebars on Justin’s bike. ARC handles the clutch perch and levers. The triple clamps are actually another factory part supplied to JGR from Japan aka “WORKS”. Pro Taper has just released new handlebar pads in new color ways just a week or so ago. Here is their blue pad/yellow cover design. 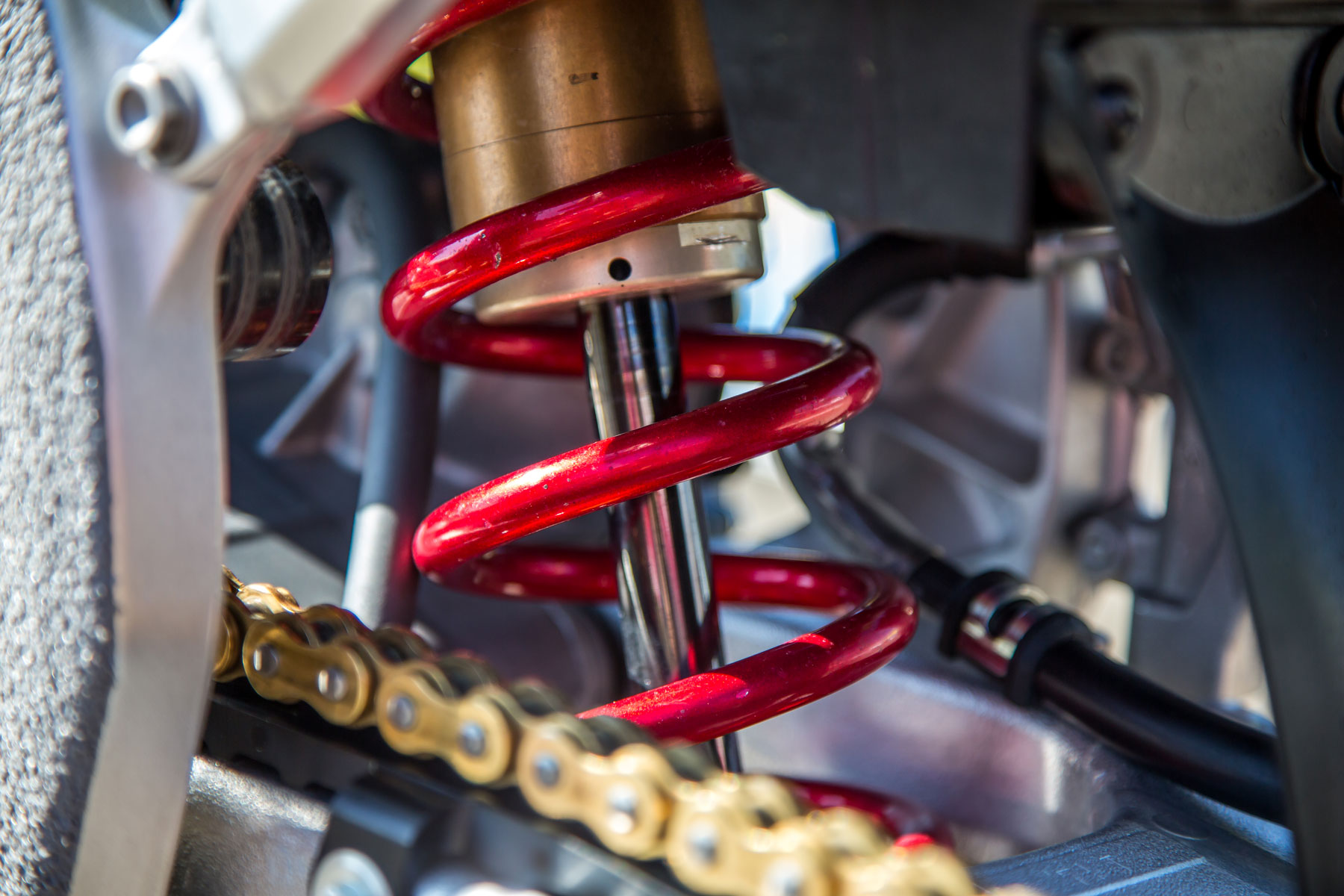 A works SHOWA shock sits out back on the JGR Suzuki RMZ of Bogle. 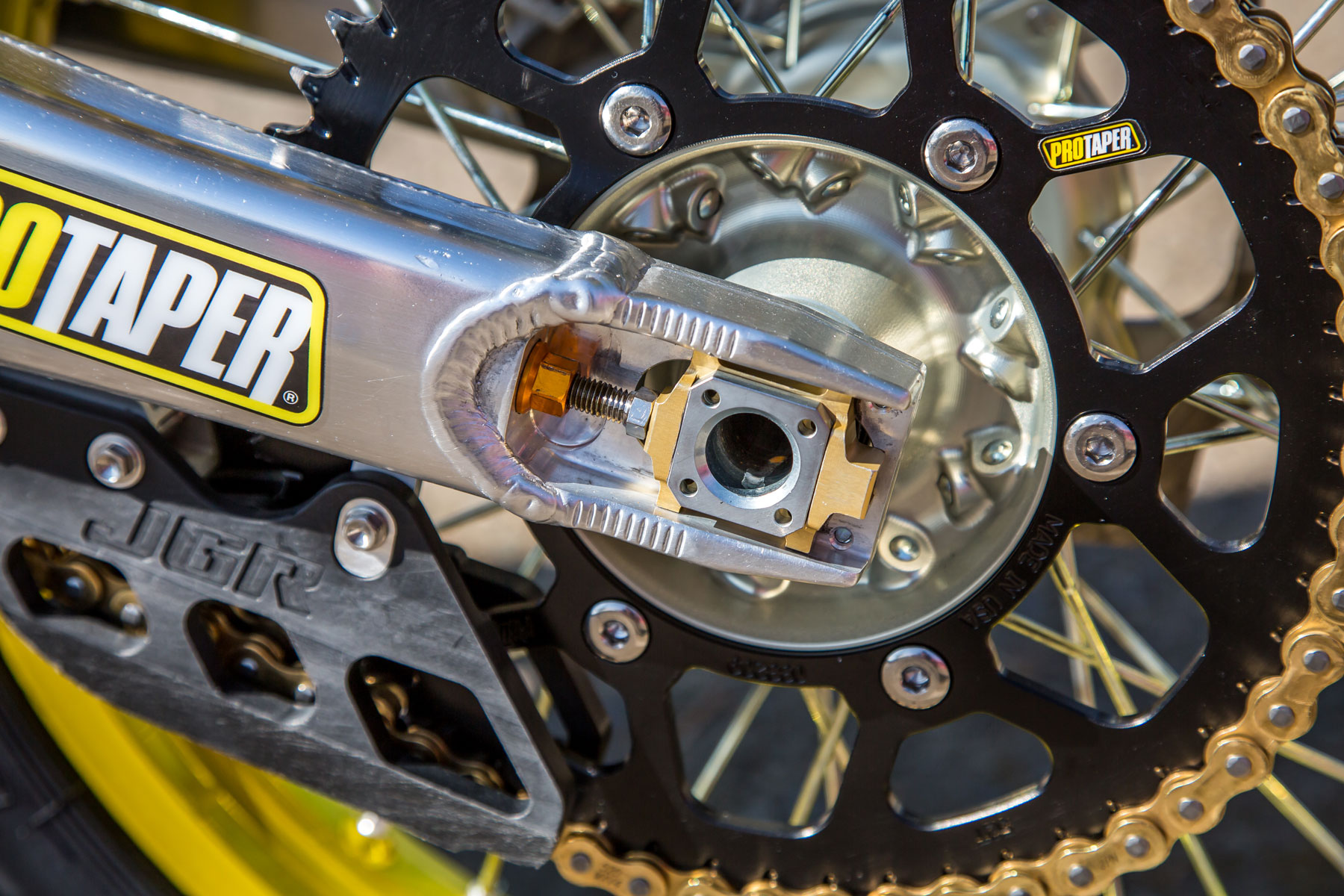 Pro Taper handles the sprockets for the race team with a D.I.D. chain. The riders all are running a 13/52 sprocket combo and have been there since testing. The titanium axel block and adjusters are another piece that are supplied from Japan. A JGR chain guide is mounted to the bottom of the swing arm. 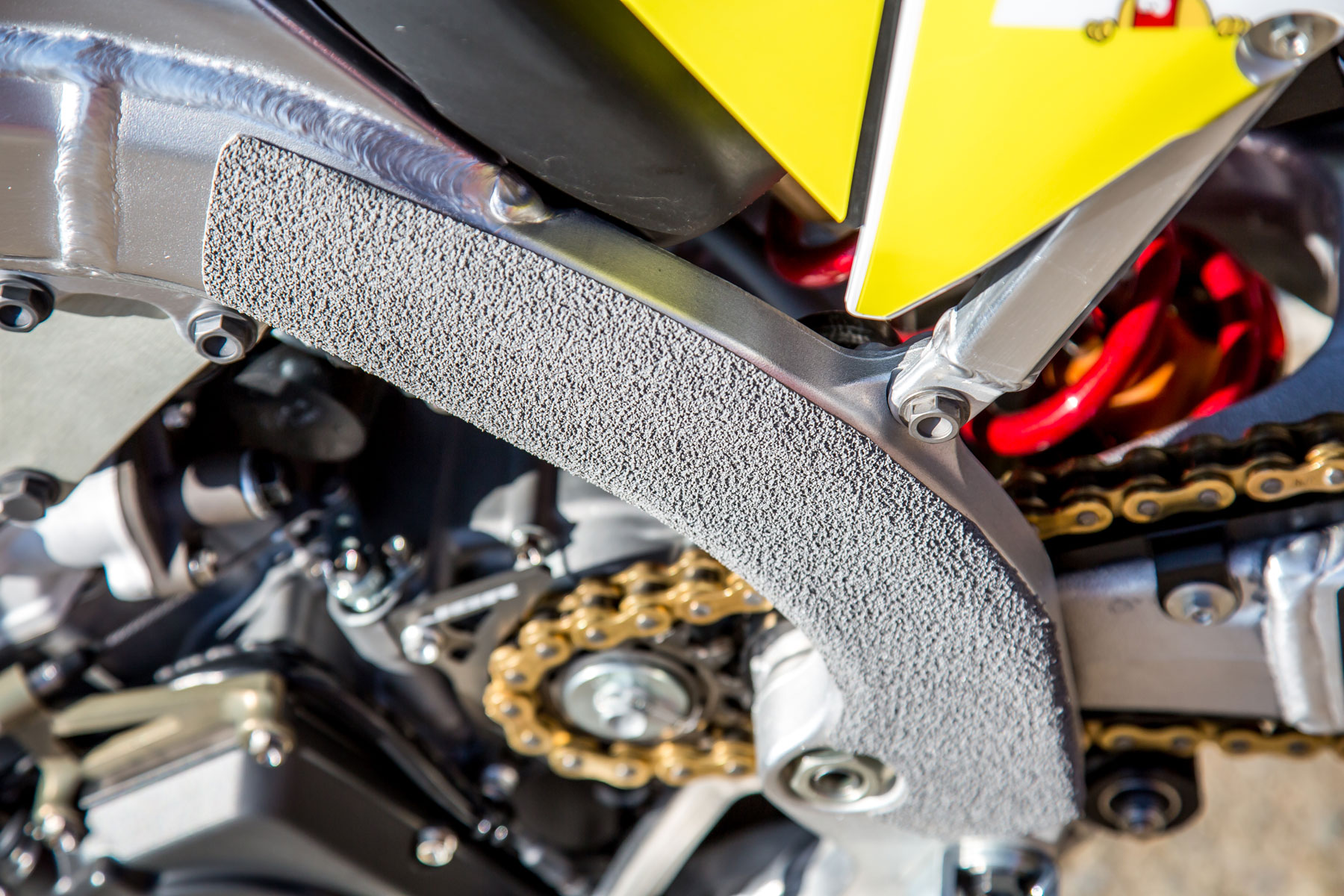 We made note of the grip tape on Justin’s bike just on the frame. Ben explained that Justin doesn’t over do it with the tape and prefers it to be just on the frame while other riders will even place more on the side panels. This is usually to help squeeze during the starts or through the whoops. 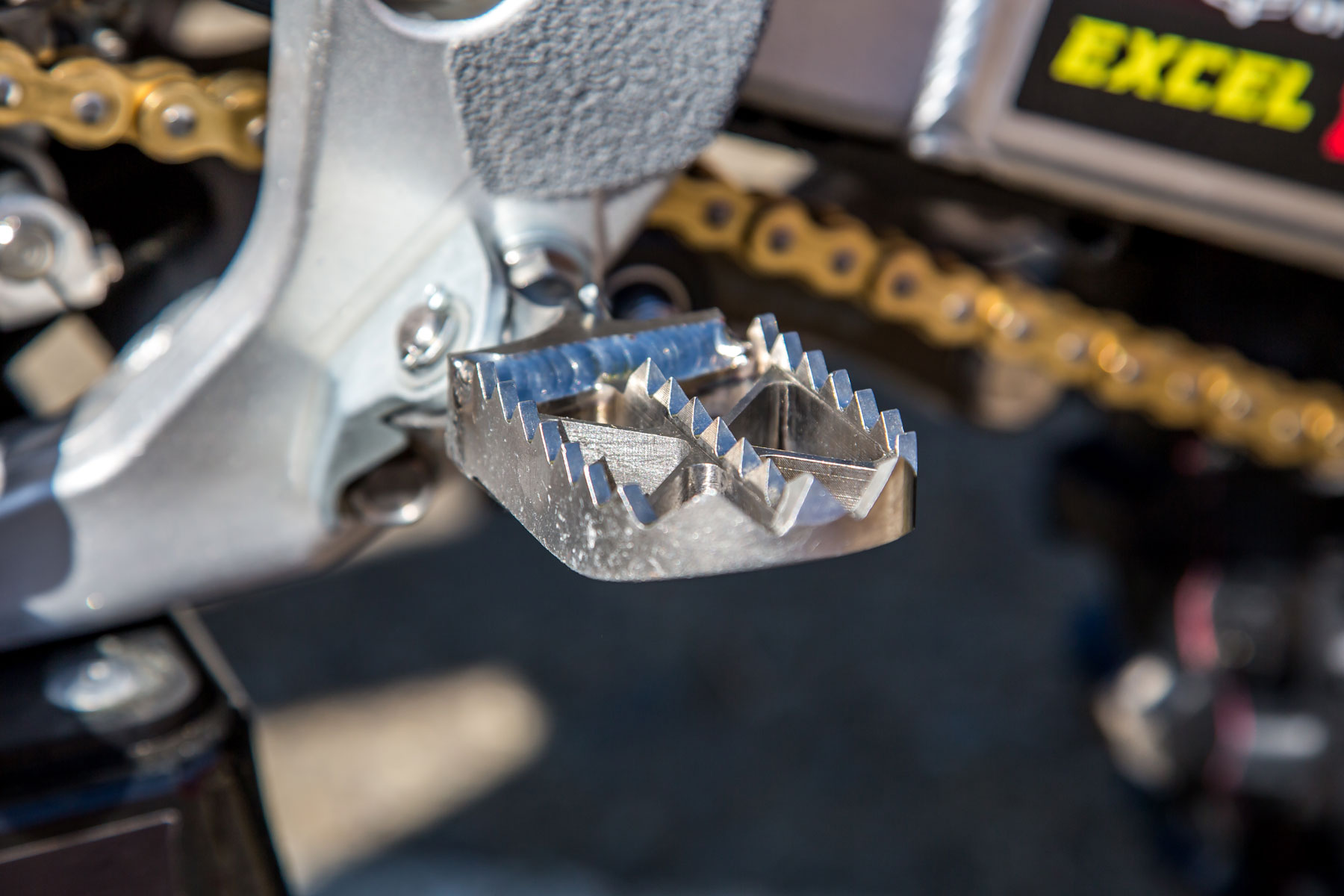 While most of the parts are sent from Japan, the foot pegs are not. These trick looking foot pegs are made in house by the JGR squad. 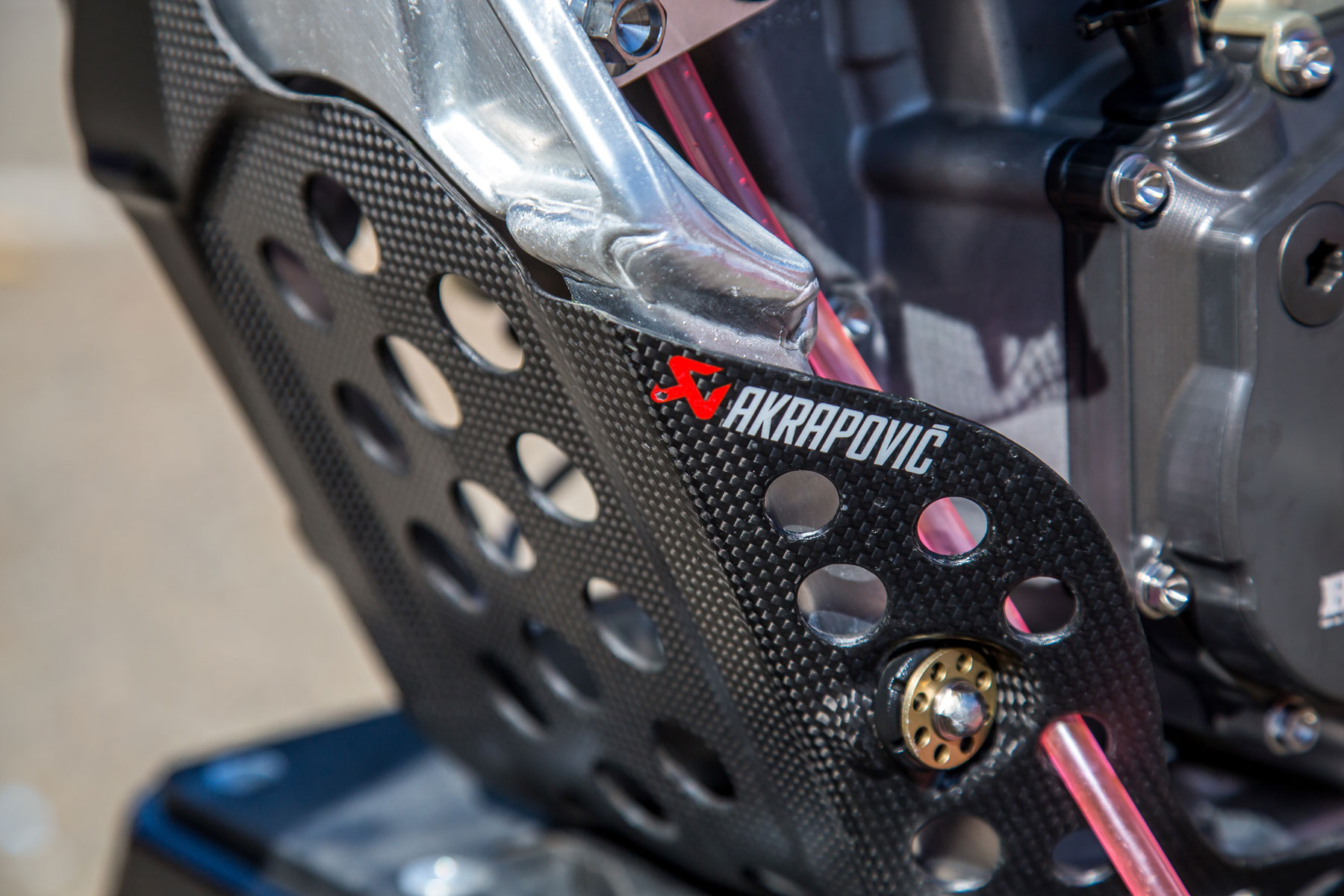 To keep weight down but add more protection, Akrapovic has this carbon skid plate mounted to the under belly of the motorcycle. Added protection like this prevents a possible malfunction during racing that could cause the rider to have to pull off or not finish. 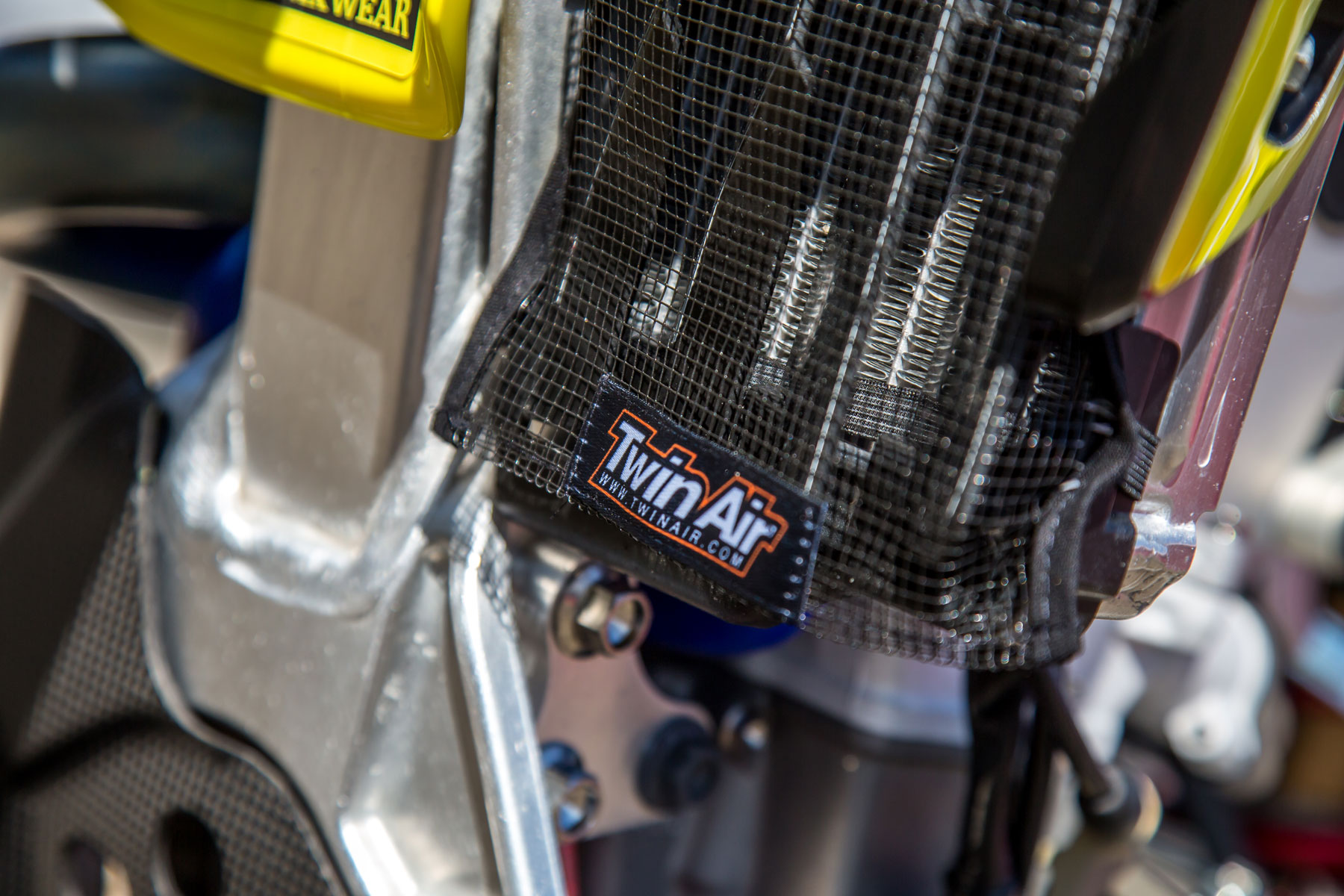 We first saw these covers at the Factory HRC truck while shooting Ken Roczen’s bike. These Twin Air supplied radiator covers are helpful in protection the radiators from damage. Ben told us it keeps rocks and sand out of the radiators. Houston was when they first started running these and now use them every race. 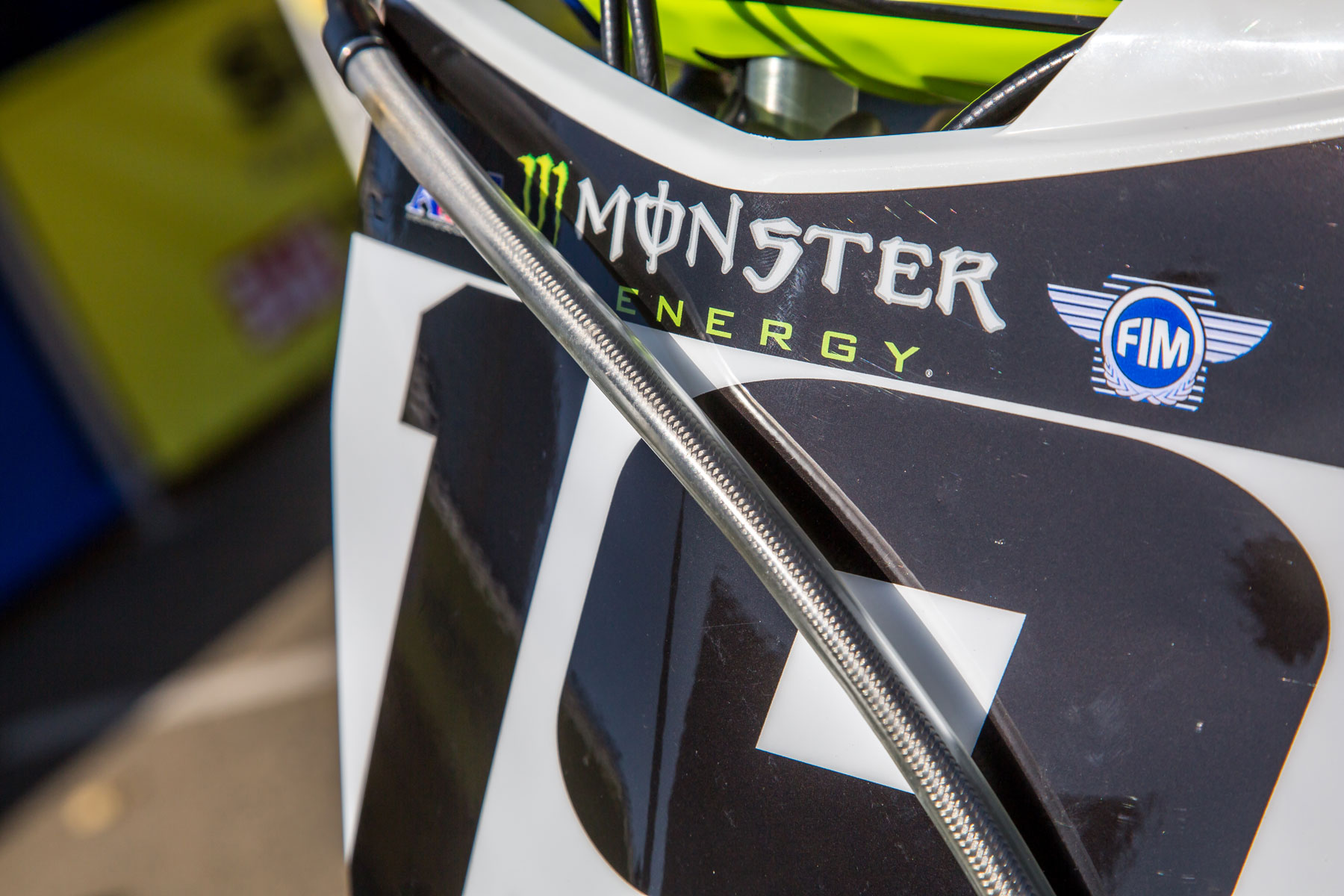 Another works part is the front brake line. This braided brake line comes straight from Japan. 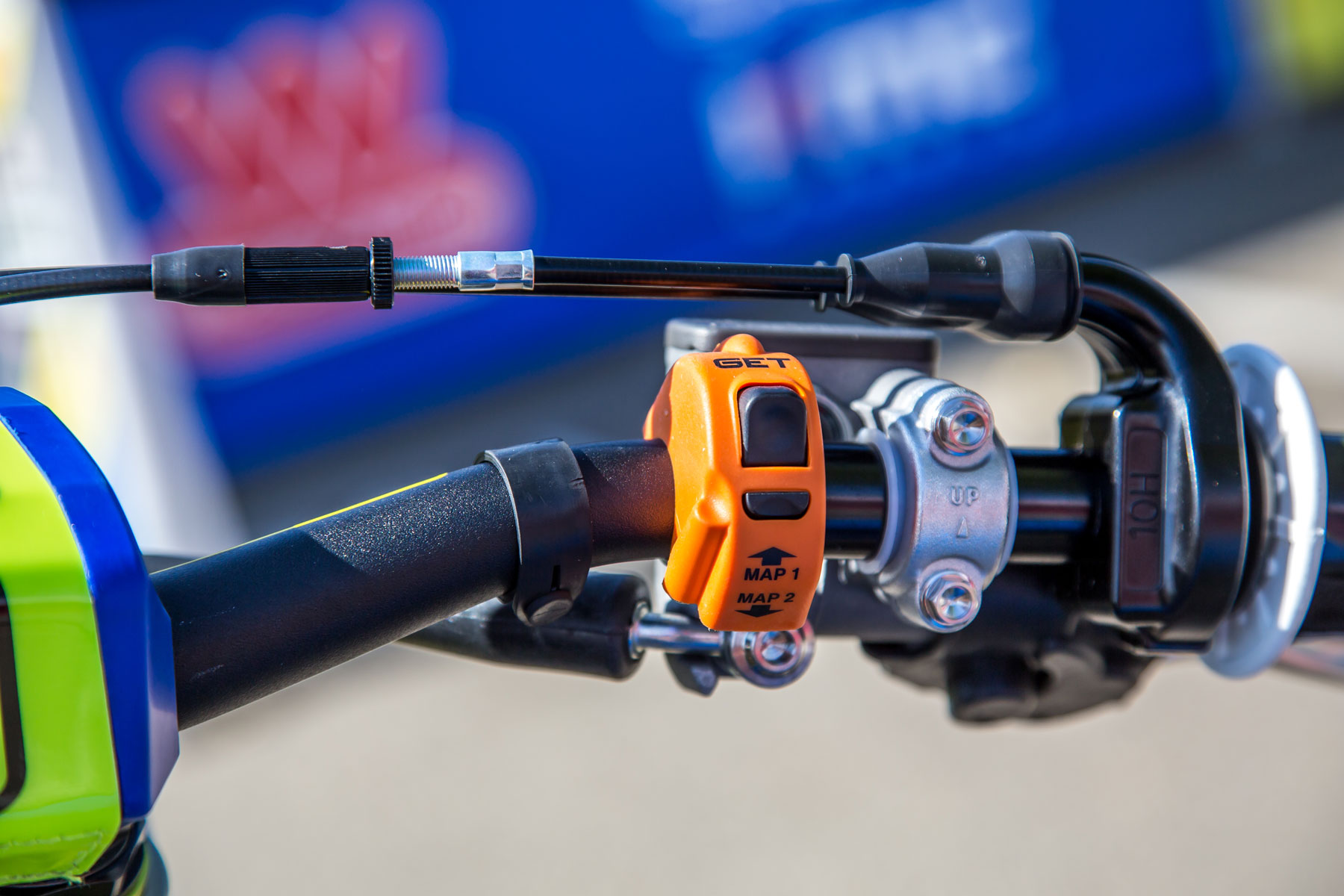 A GET ignition map switch is installed to Justin’s bike. He has the choice of 2 maps on his handlebars during racing situations. We have seen similar switches like this on other factory teams. 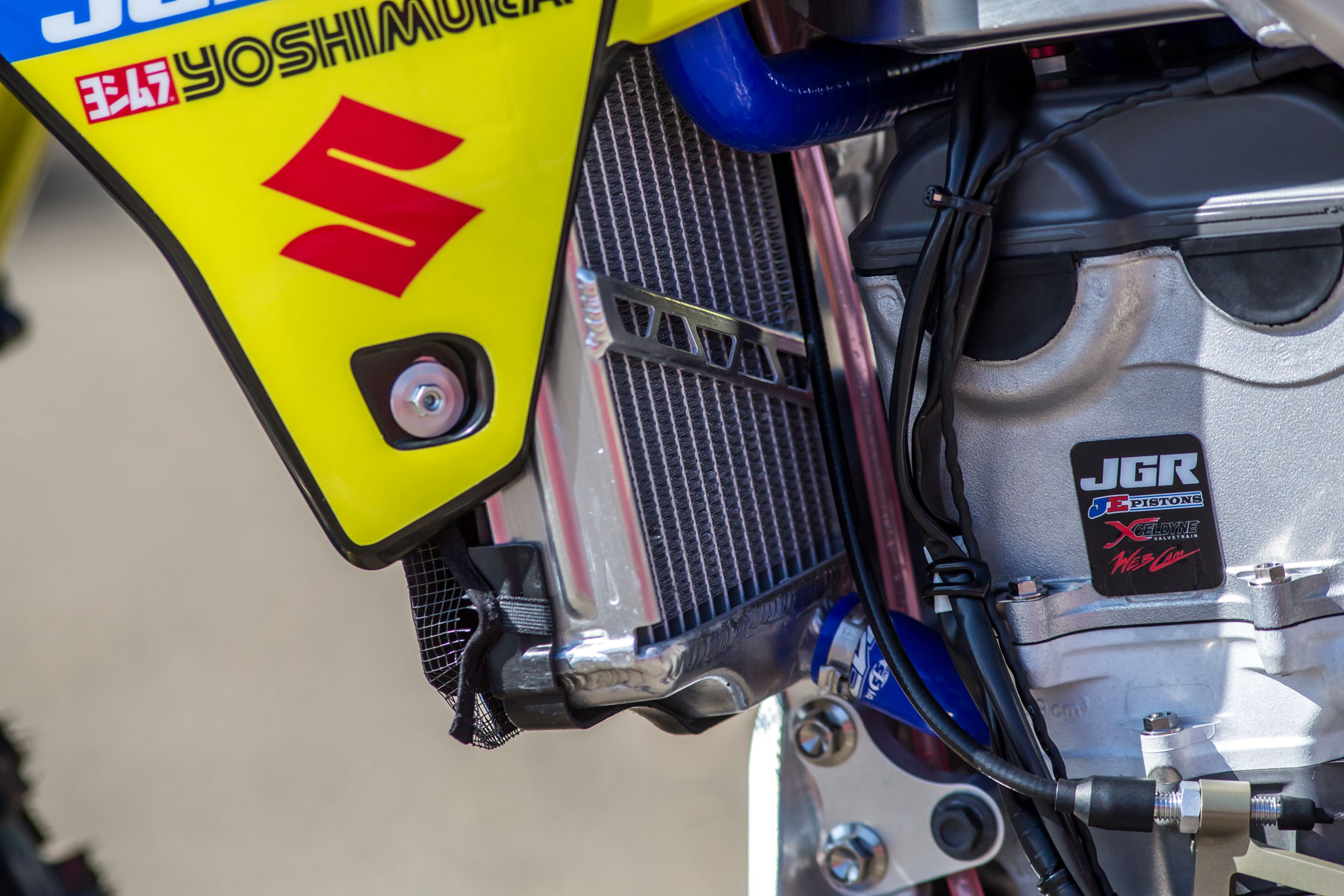 The radiators are actually braced in house at JGR for added protection. 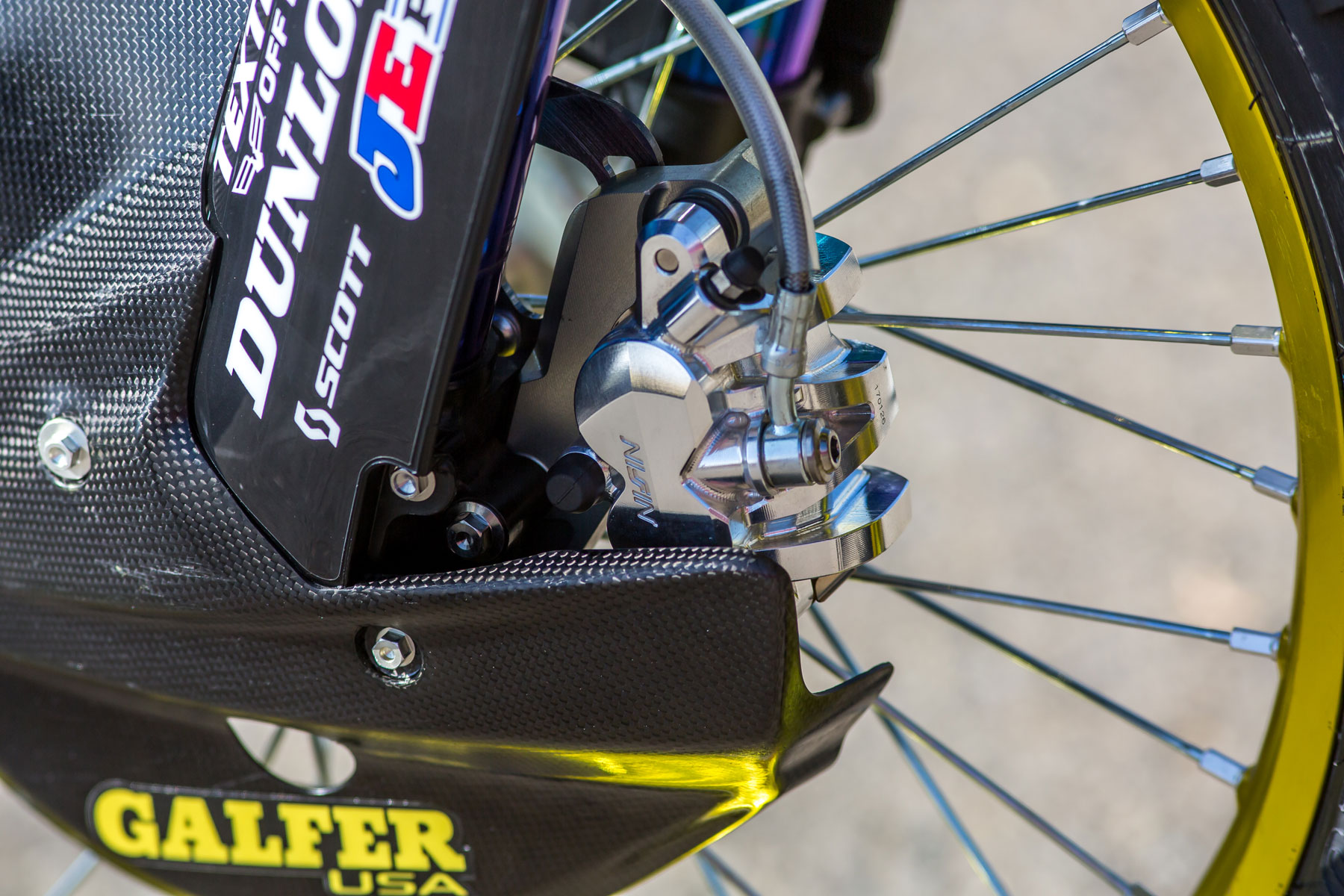 A works carbon front disc guard from Japan is mounted to an over sized front brake which is also from Japan. Oversized factory Nissin caliper completes the braking department down low. 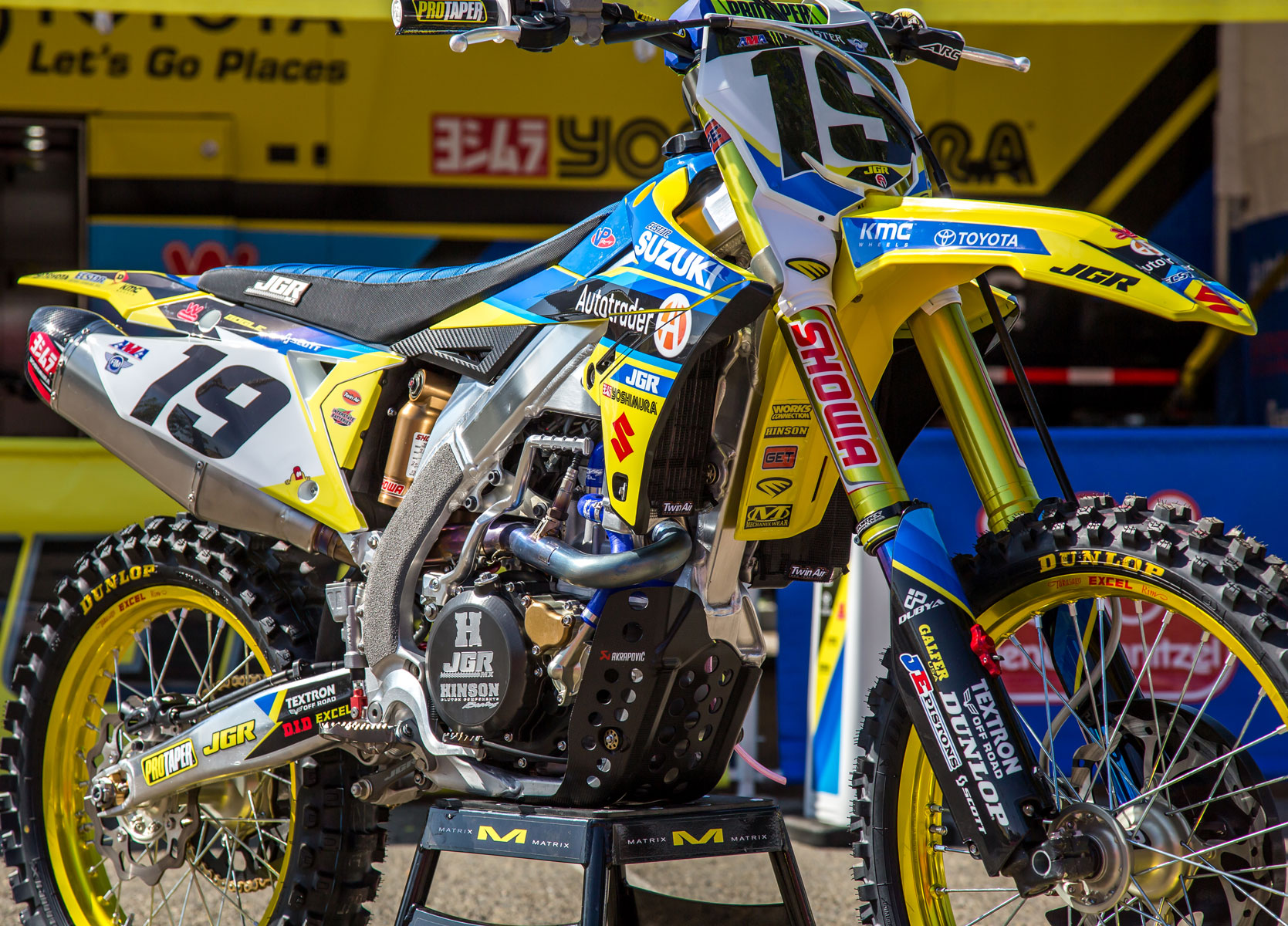 Take a look at the hole shot device. Justin’s hole shot device is much lower than the typical position. This sucks the bike even further down and closer to the ground. Some of the factory teams are running a double button to add multiple starting positions on the gate. 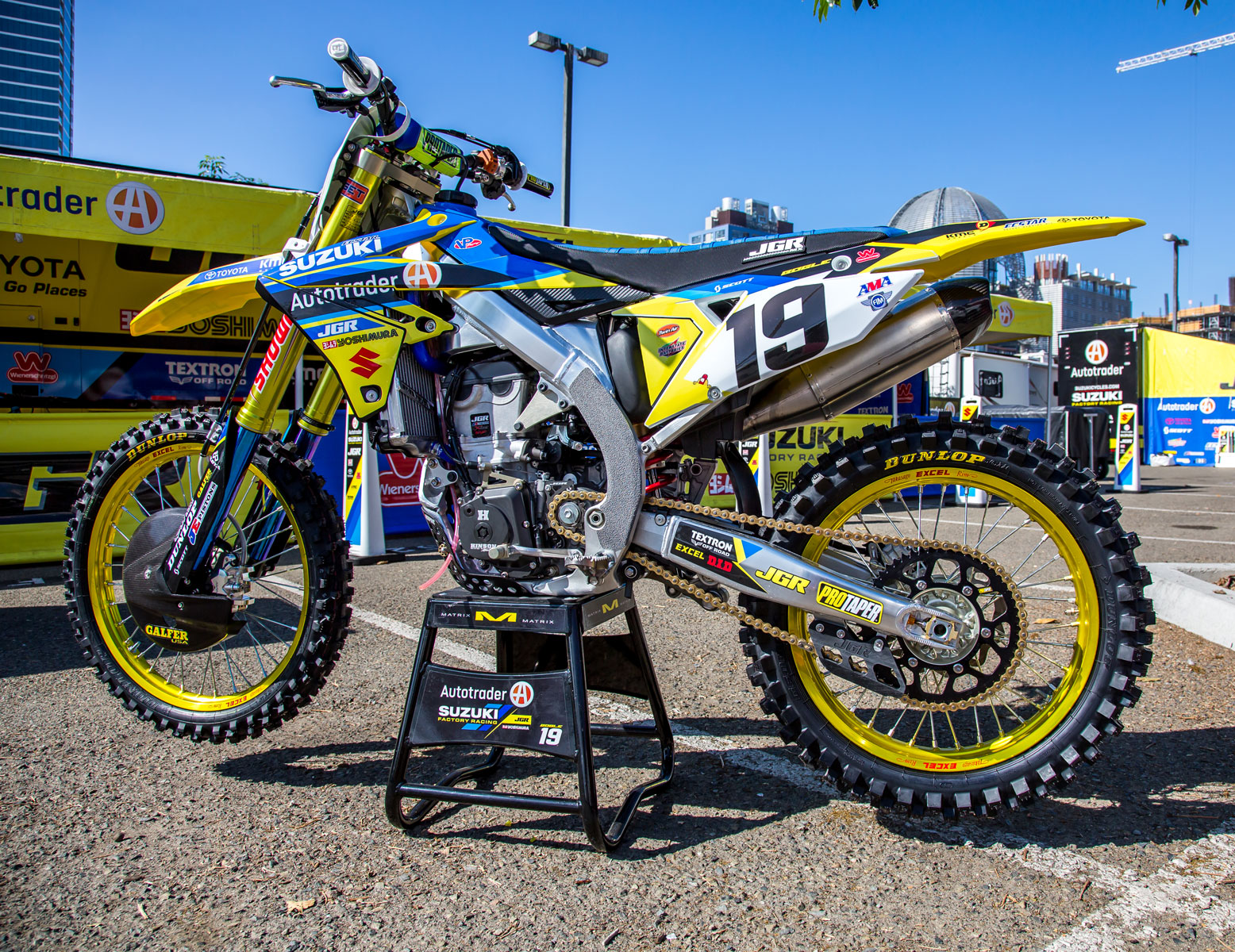 A ribbed GUTS seat cover and seat foam is added to the bike. All the plastics are done by CYRCA. The Dunlop tires mounted to Justin’s bike are spec tires that eventually make their way to consumers after hours of racing and testing. 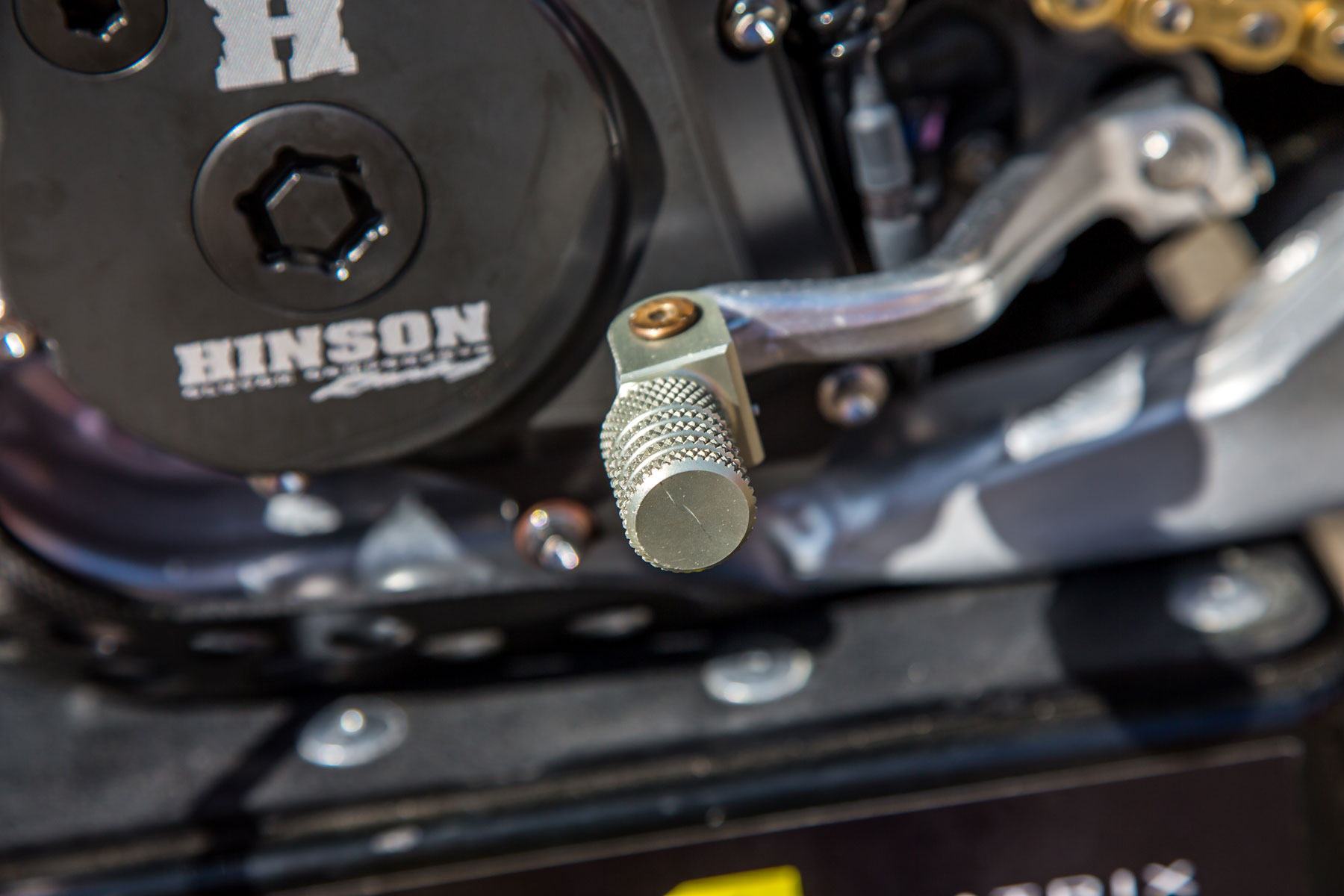 This shifter tip is a plus 5 offset and the same one Justin ran last year. This is unique to Justin while the rest of the team run a JGR made shifter with standard offset. 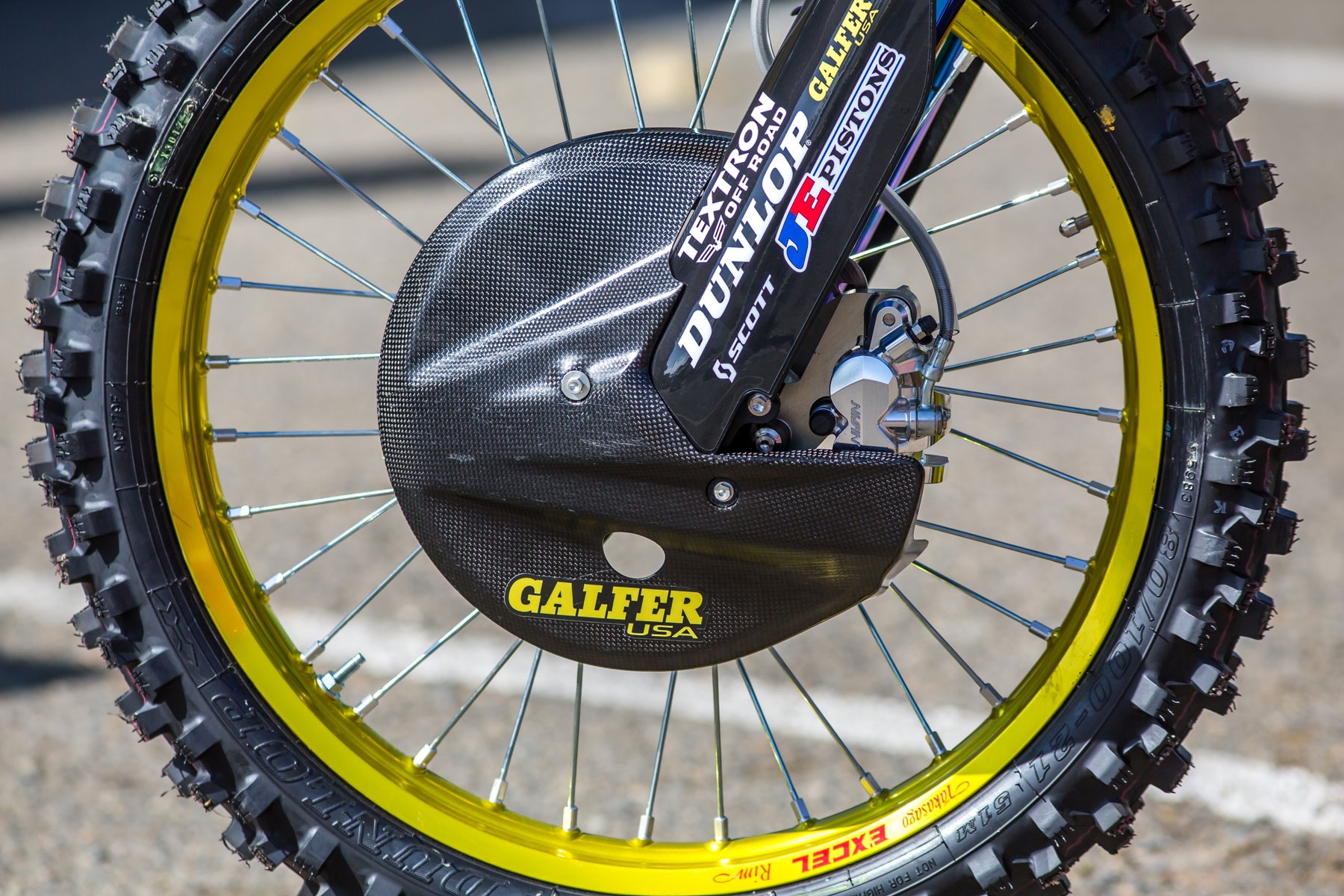 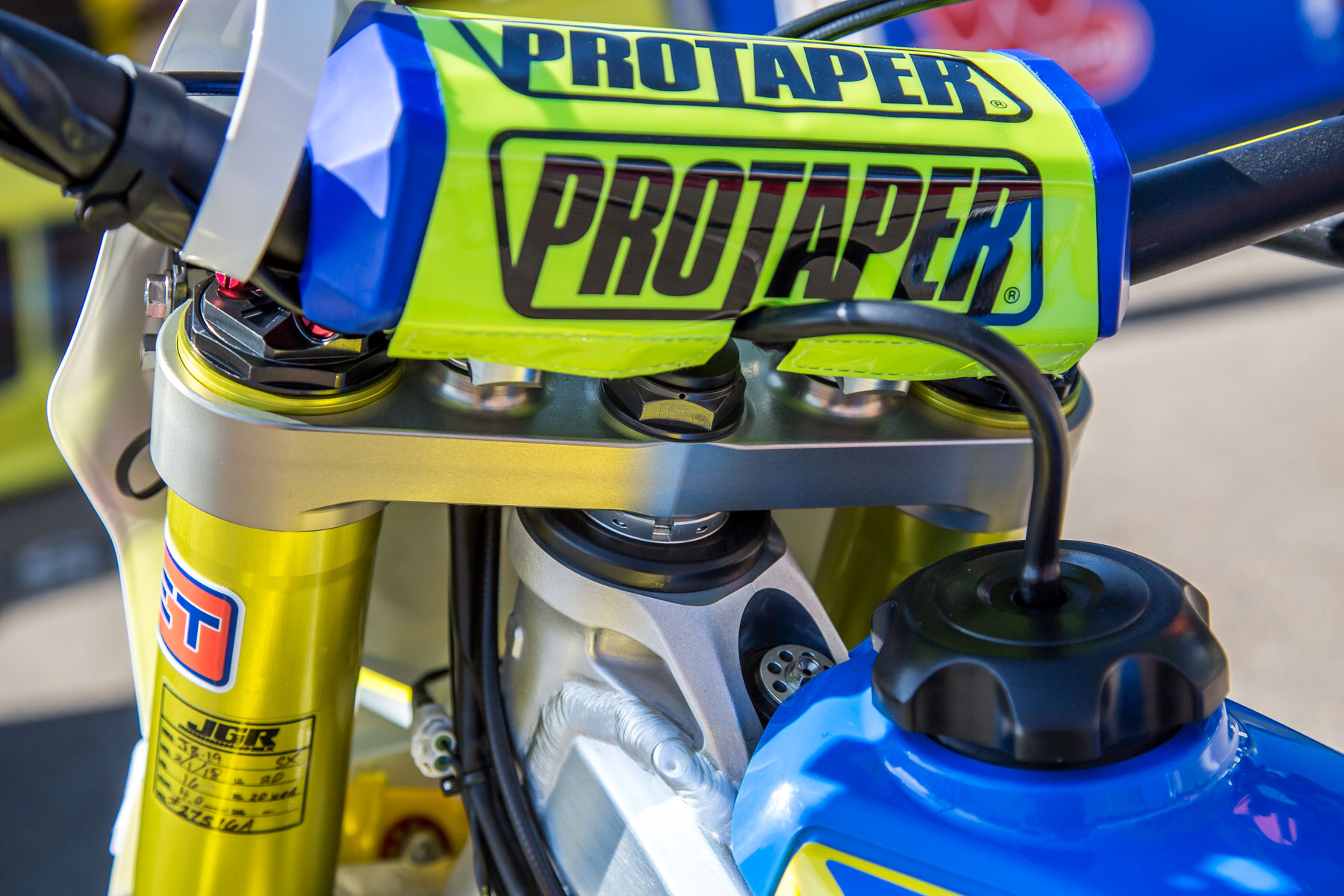 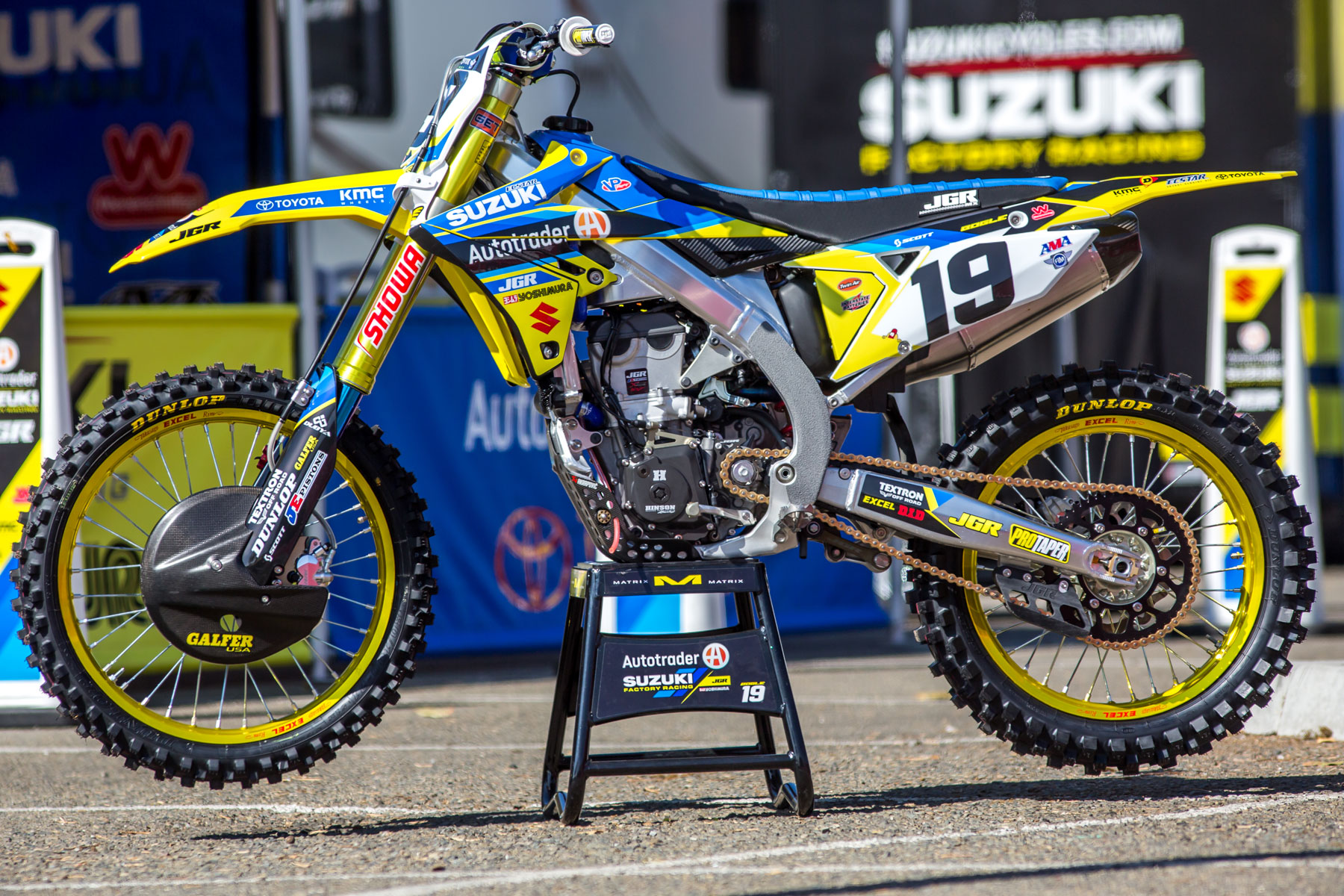