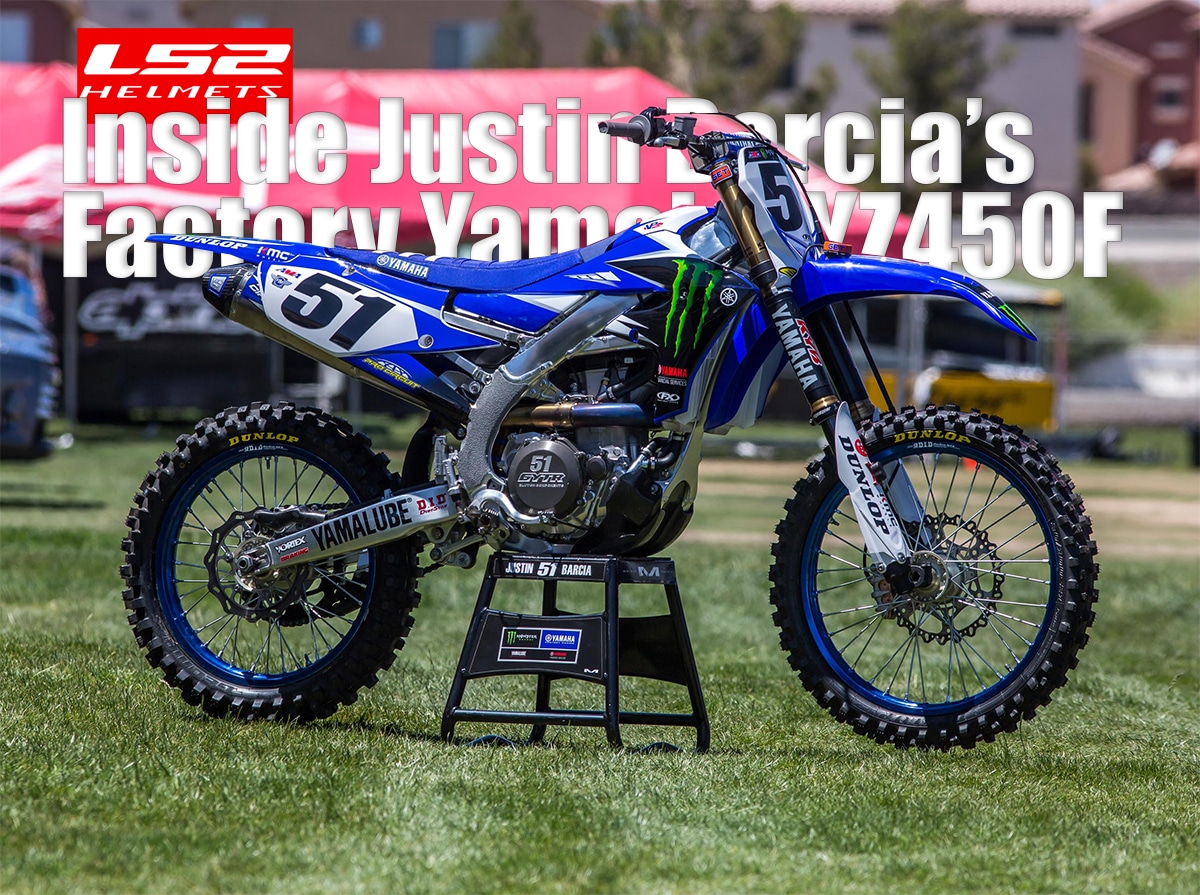 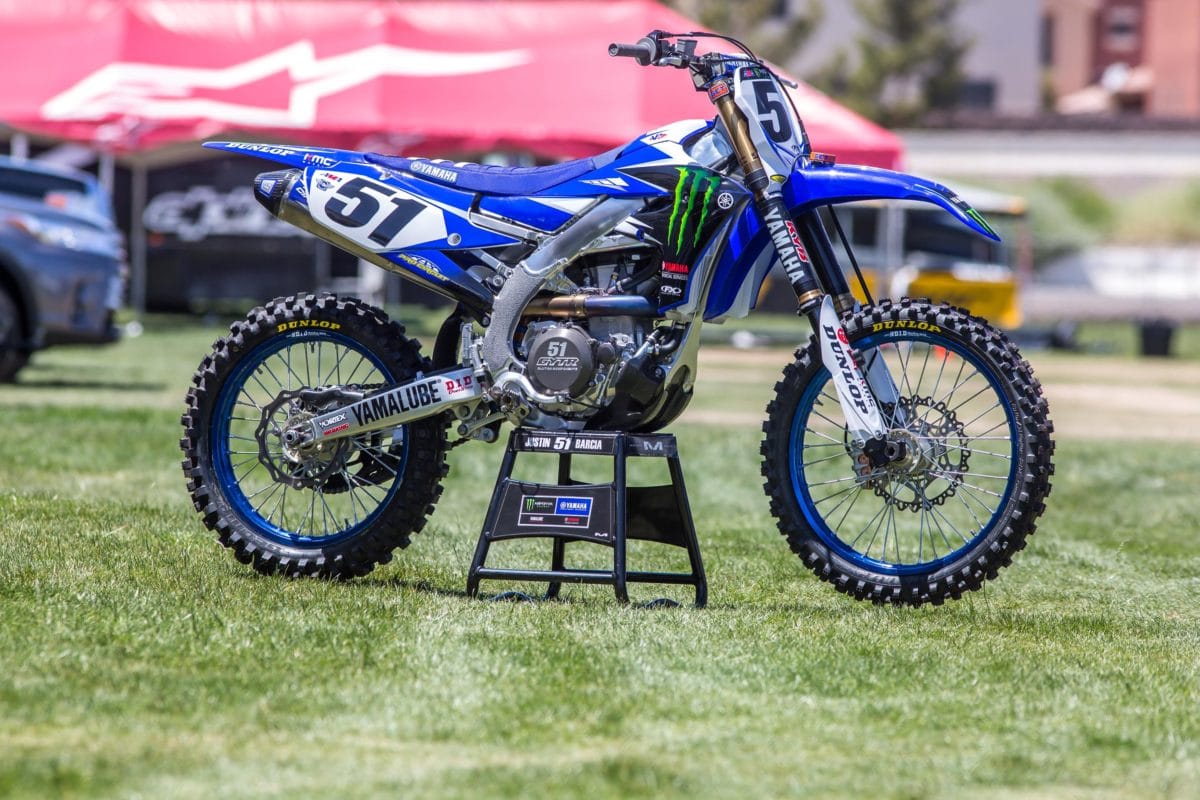 As the 2018 Supercross season comes to an end we had one last bike to look over and didn’t want to miss. Justin Barcia has proven himself in just a small amount of time on the YZ450F and we had to know just how he sets up his bike. Mechanic Grant Hutchinson sat down with the Dirt Bike Magazine staff and gave us a closer look at the #51 machine. 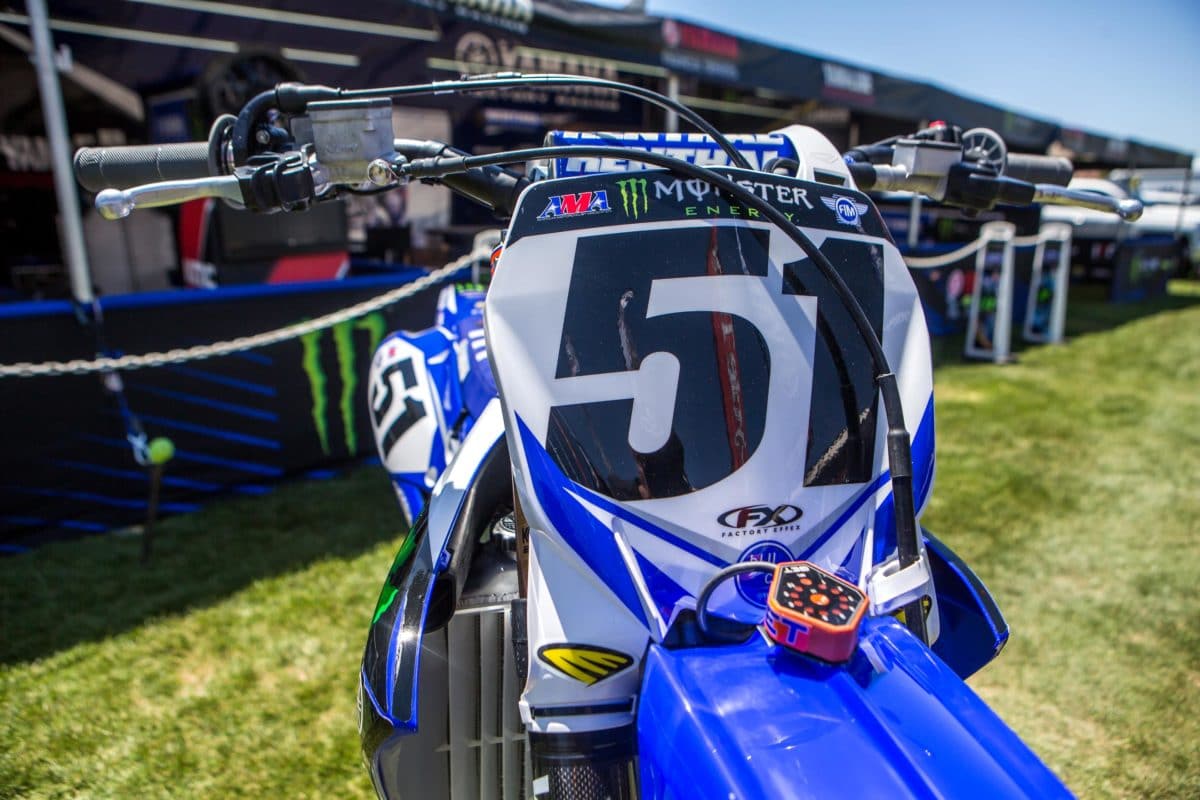 At the front of the bike you come to a wide array of trick components. Justin runs a 602 Renthal Fatbar with medium/full diamond grips. With his controls they run a completely stock front brake system. His lever mounts are inward on the bars while the actual levers are out just a bit. A very trick component is the hydraulic YRRD clutch that runs a Brembo master cylinder and one off piston assembly. 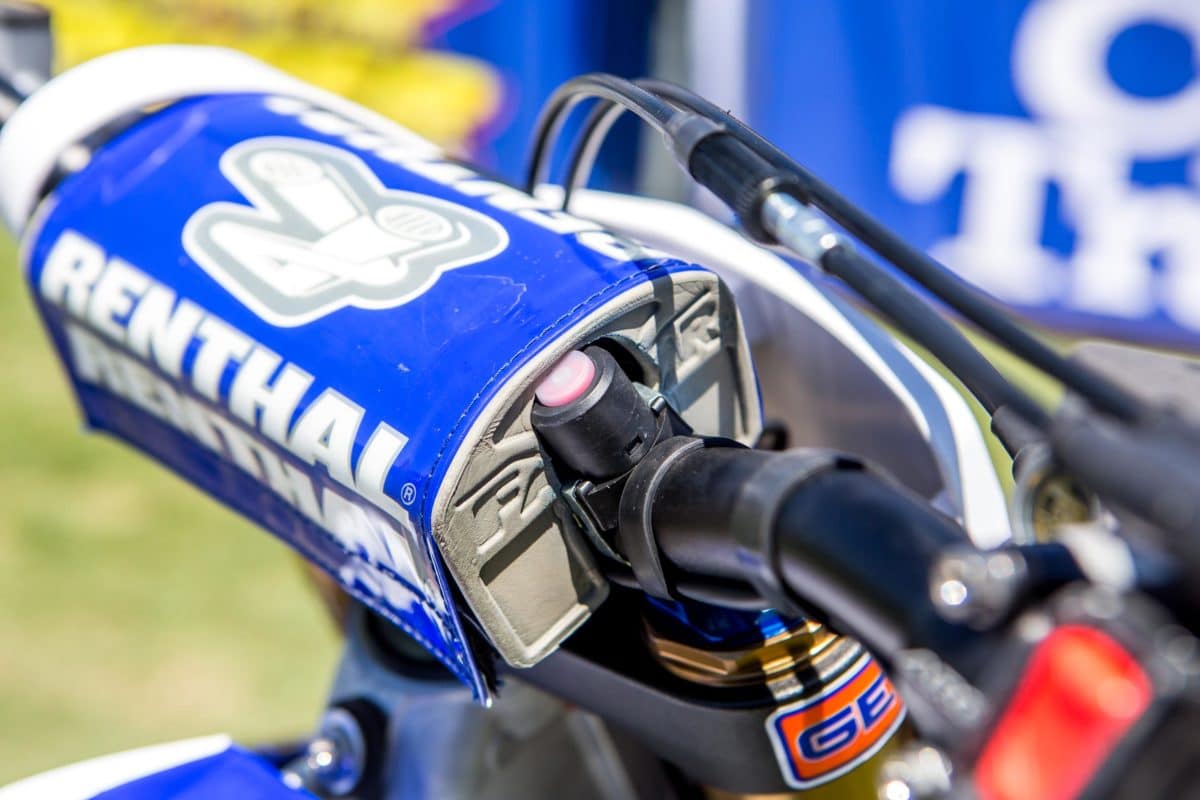 On the handlebars Yamaha has incorporated their own start button/map switch control and also run the stock launch control button. It lets them choose between different starting maps. 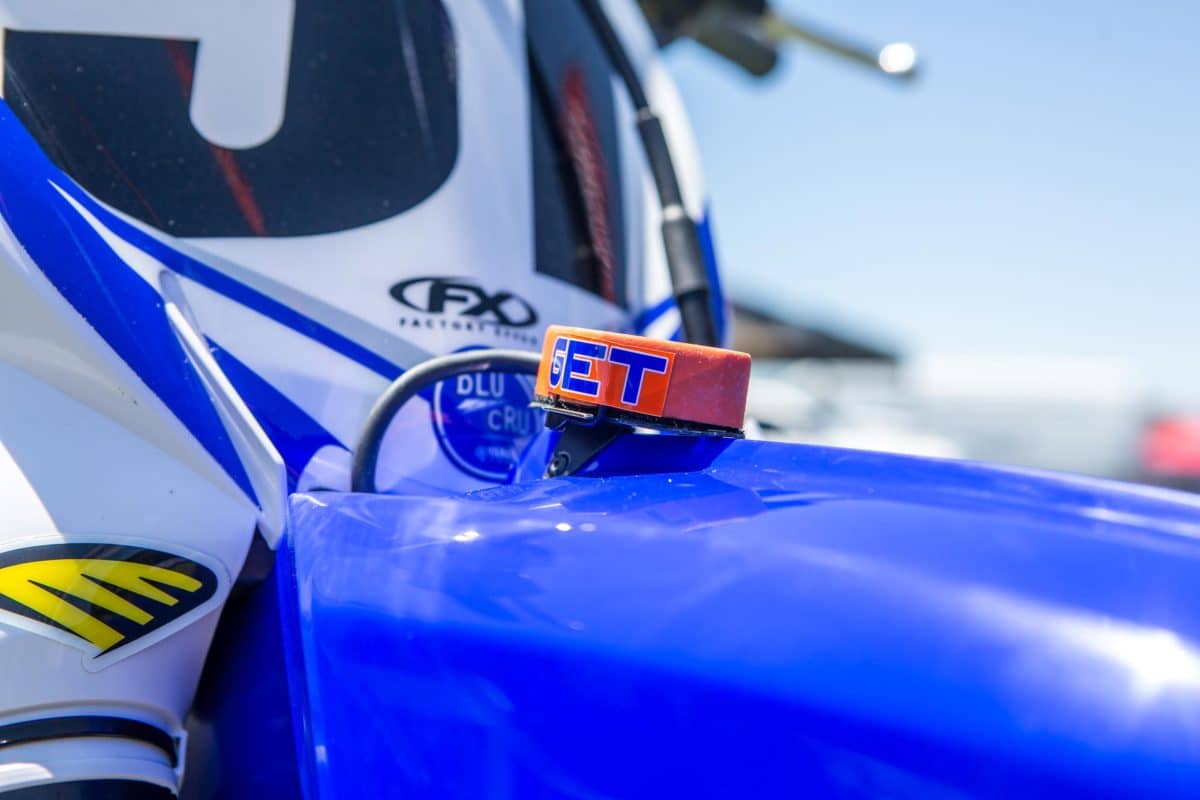 The Yamaha team runs a GET ECU and GET GPA so they have the ability to tune the start maps themselves. 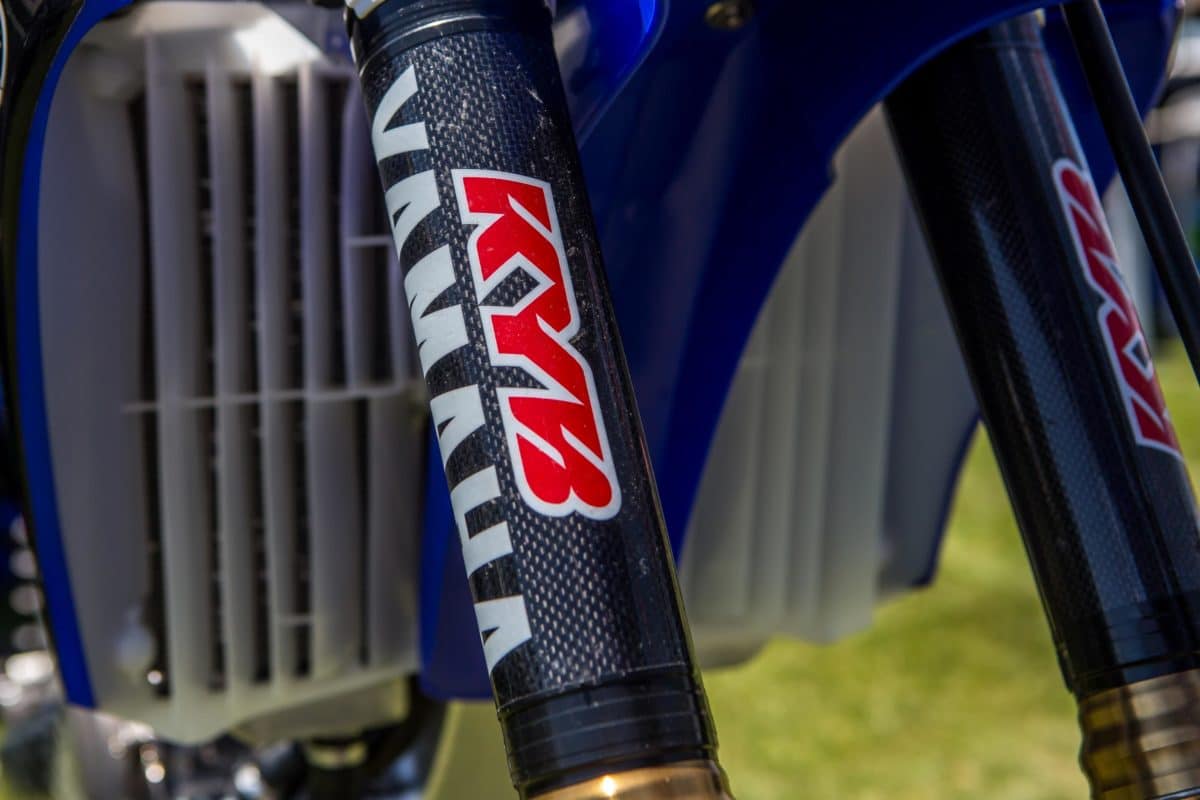 Justin runs a standard KYB spring fork. It is a works fork. They allow of adjustment. There are 2 compression adjustments as well as 2 rebound adjustments available. The team also has the capability to add air to the fork if they need to. 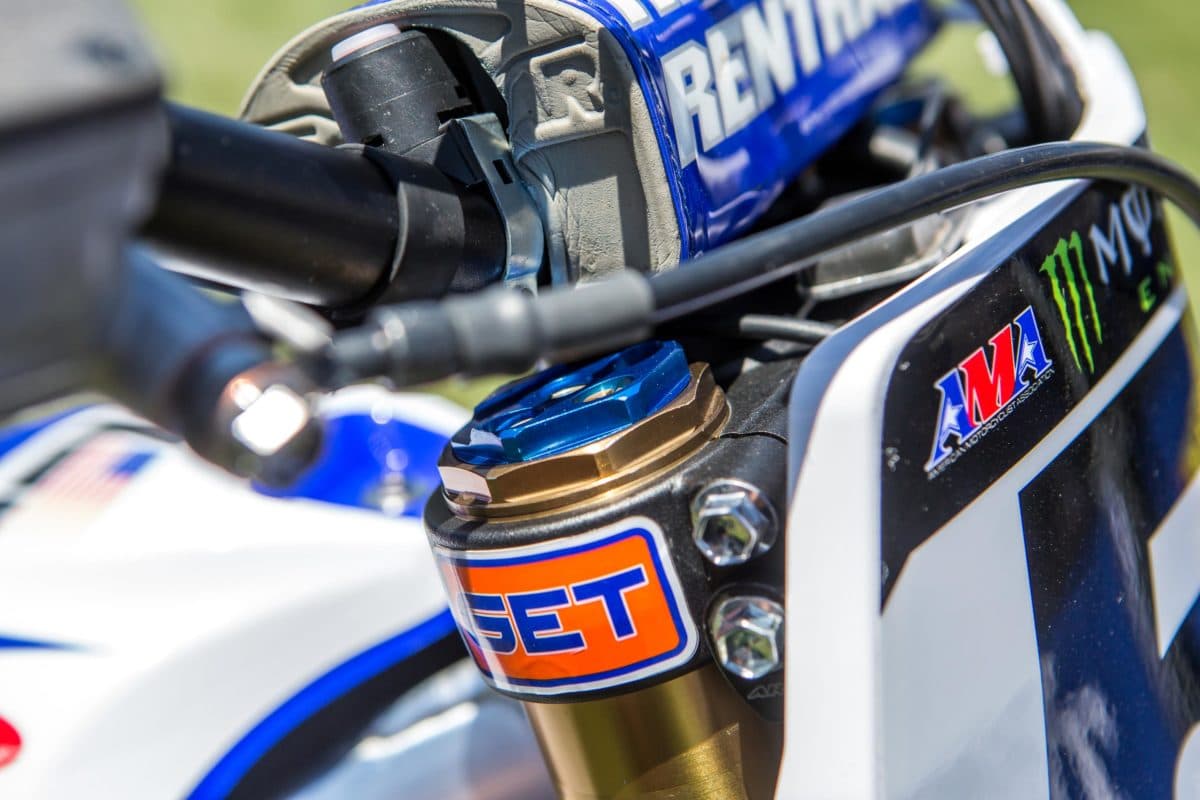 Believe it or not, Justin runs stock clamps. Over the testing they have chosen to be at stock position and like the feel. 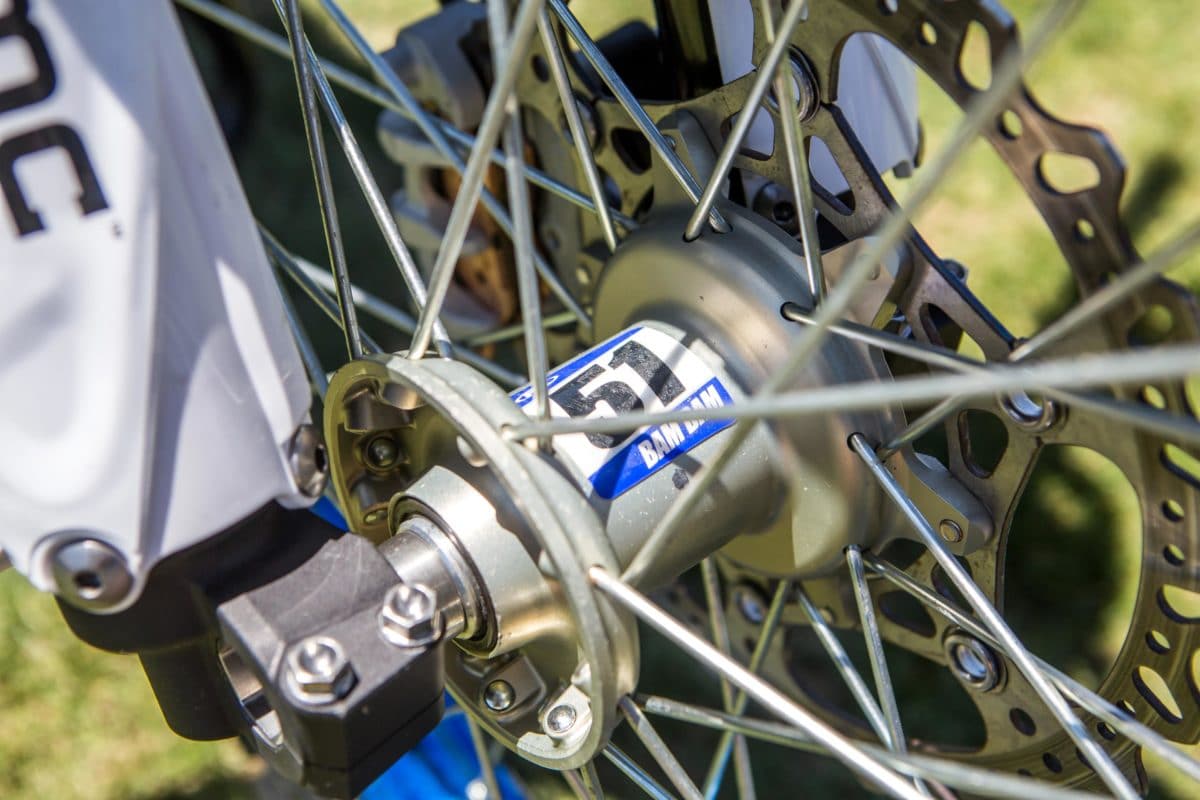 For wheels an OW hub is used straight from Japan. 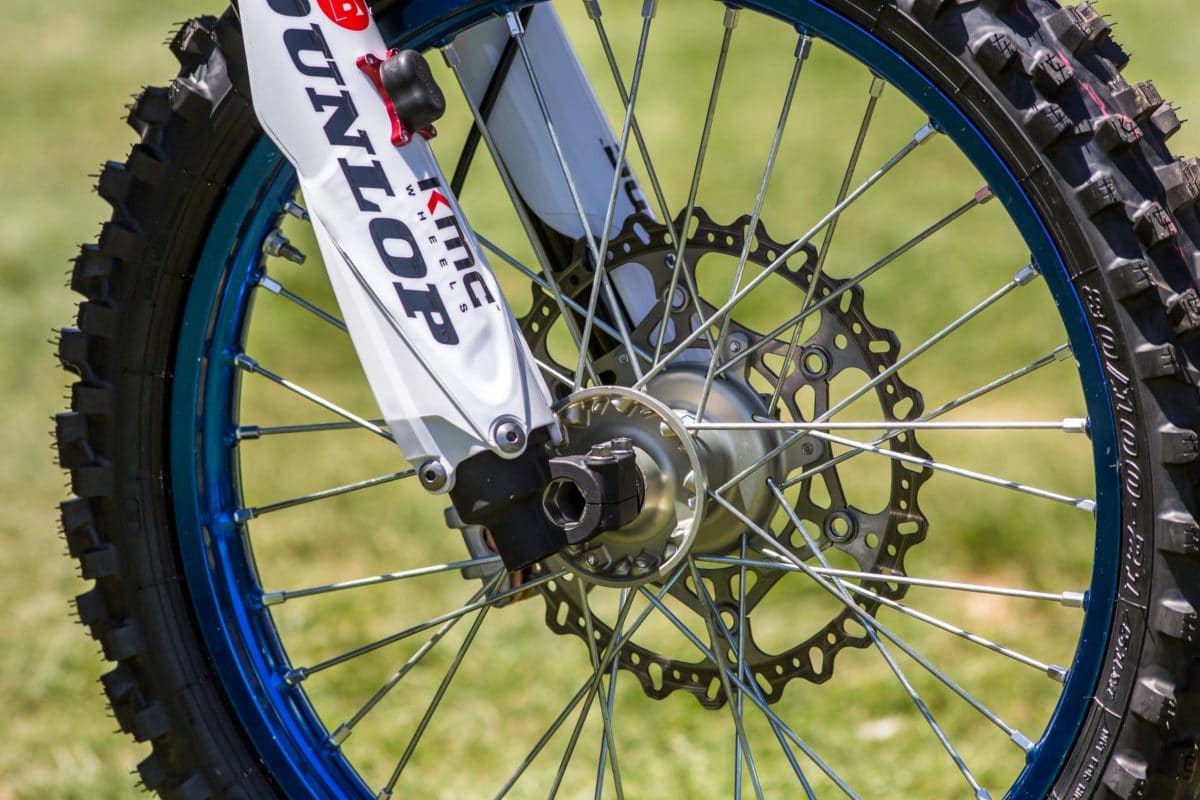 A D.I.D Dirt Star SFX rim is used on Justin’s bike (doesn’t come OE) wrapped in Dunlop tires. The rim is custom and sent off to be anodized and polished to add some factory flare. Braking handles the rotor department and are OE with an OE caliper. The front axel is titanium. 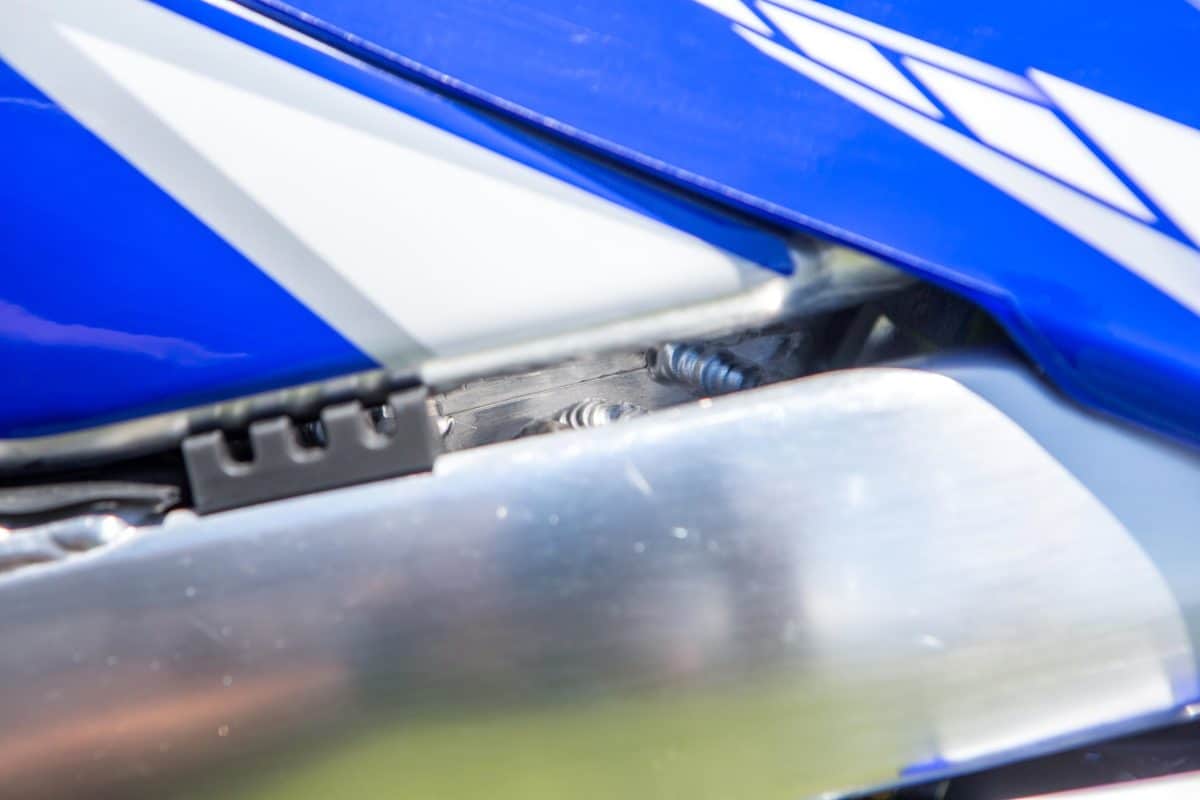 For the gas tank Yamaha runs a custom built aluminum tank that is from OW and is a factory part sent from over seas. It is actually makes the bike a little bit skinnier. Grant explained that it changes the feel of the bike as well. The ride is stiffer and the tank doesn’t squat down as much. 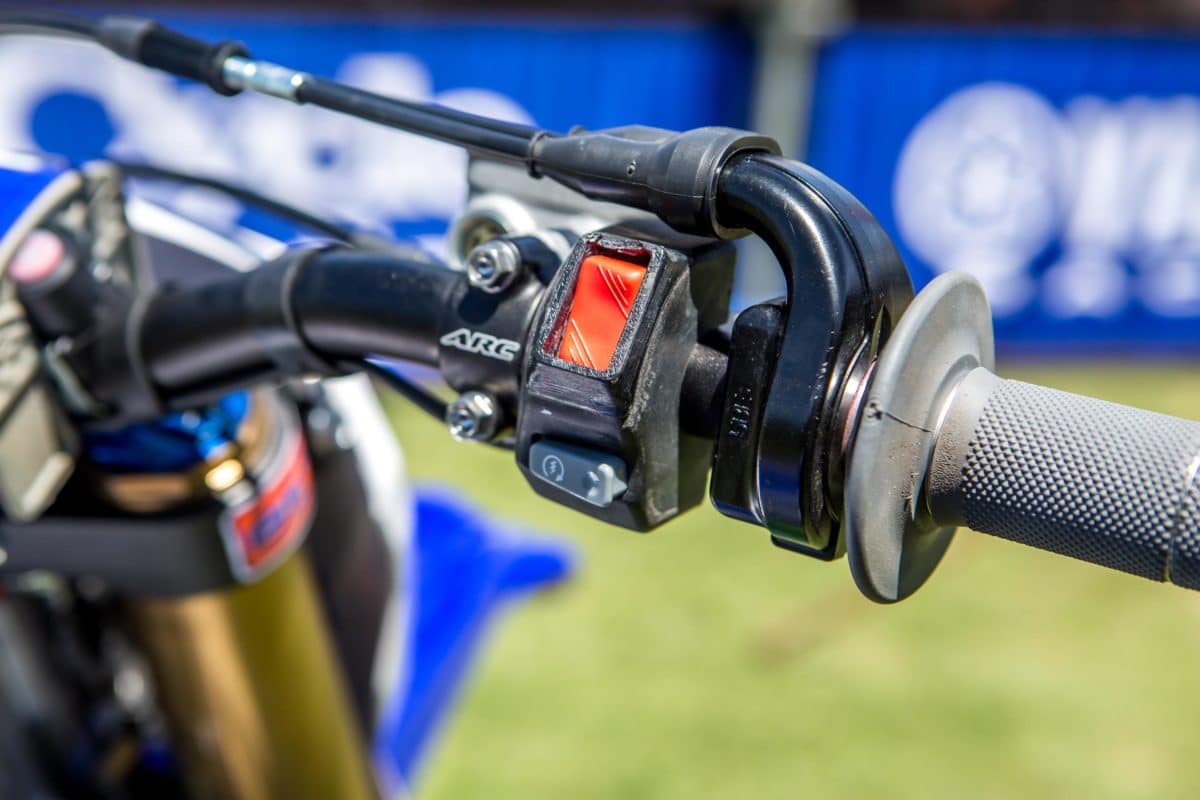 On the handlebars Yamaha builds an in house starter/map switch control to try and put everything all into one. They wanted to take some of the clutter of the bars and scale things down. You also notice in the photo a billet throttle tube is added to Justin’s bike. It is an in house made throttle tube that is thinner and lighter that gives a freer feeling. 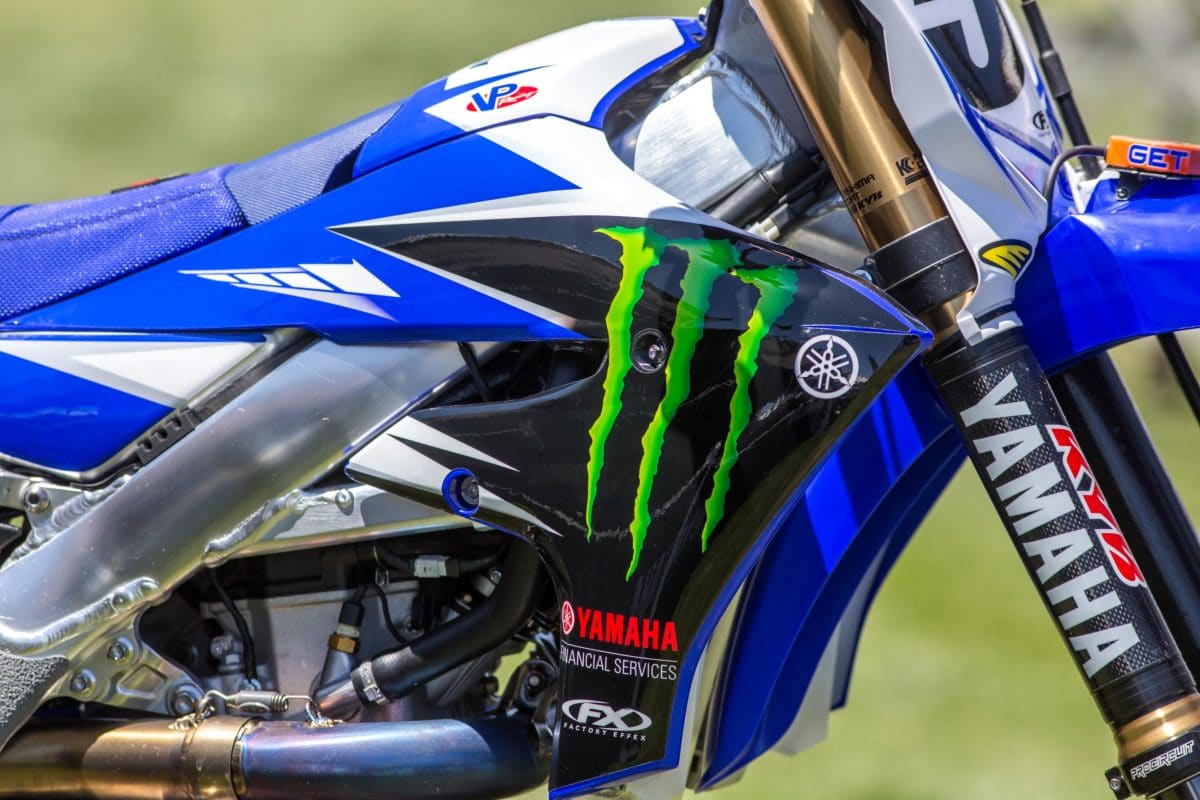 The team primarily runs all stock plastic except the Cycra front number plate that just released a couple weeks ago. Factory Effex handles all the graphics as well as seat cover for the team. For the cooling system, the radiators and hoses are OE. The team likes to weld the spicket and seams for added insurance in the event of a crash. Outdoors they will run a fan to help with cooling. 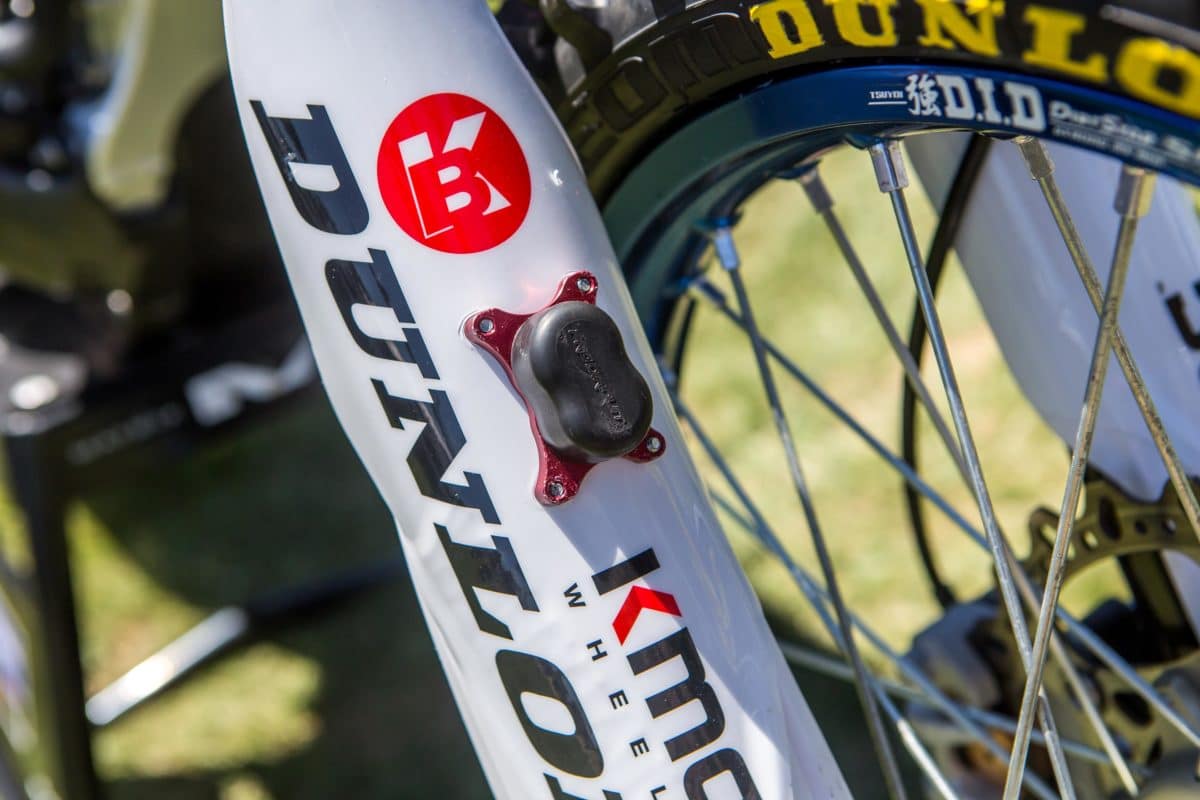 Justin runs a 2 position start device made by Pro Circuit. Depending on the traction after the gate the team will change how far the fork is compressed on the gate. Grant explained that the available traction after the metal portion is now more important than when they used to start on complete dirt. 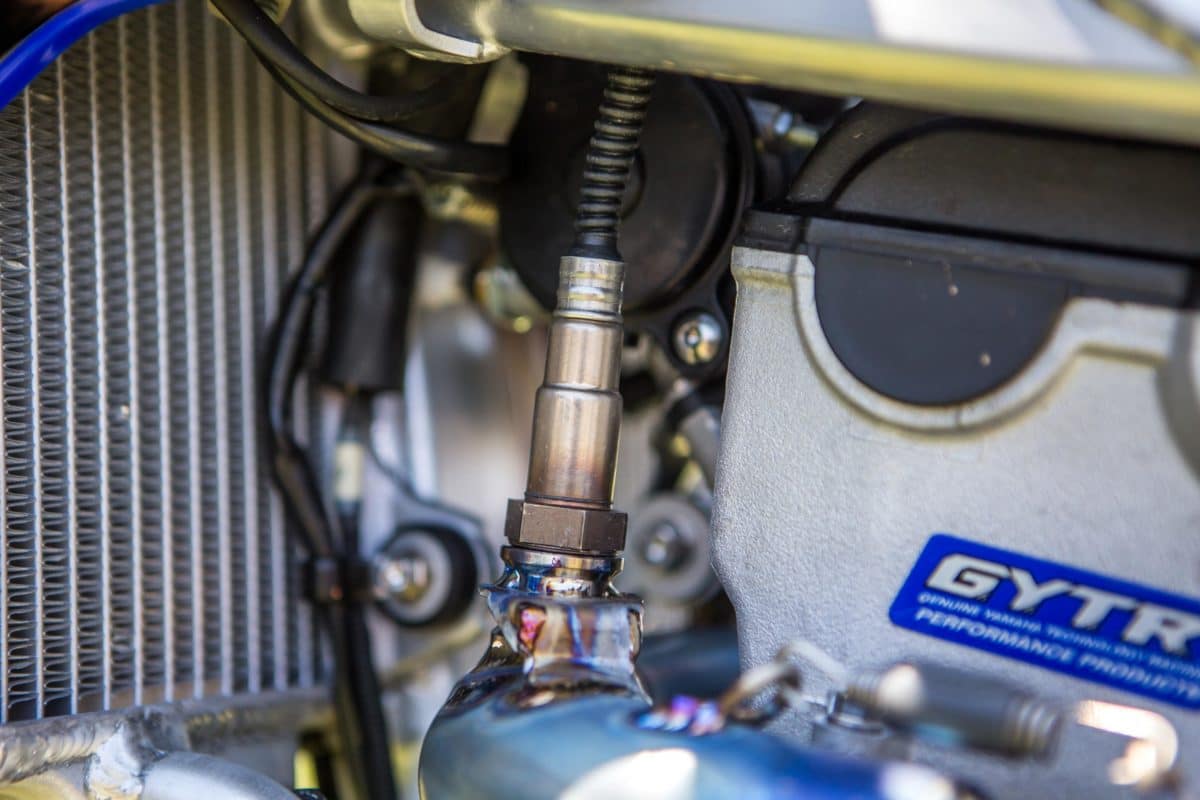 This year Pro Circuit helped ad the O2 sensor to the exhaust for data acquisition and a custom PC emblem on the header. 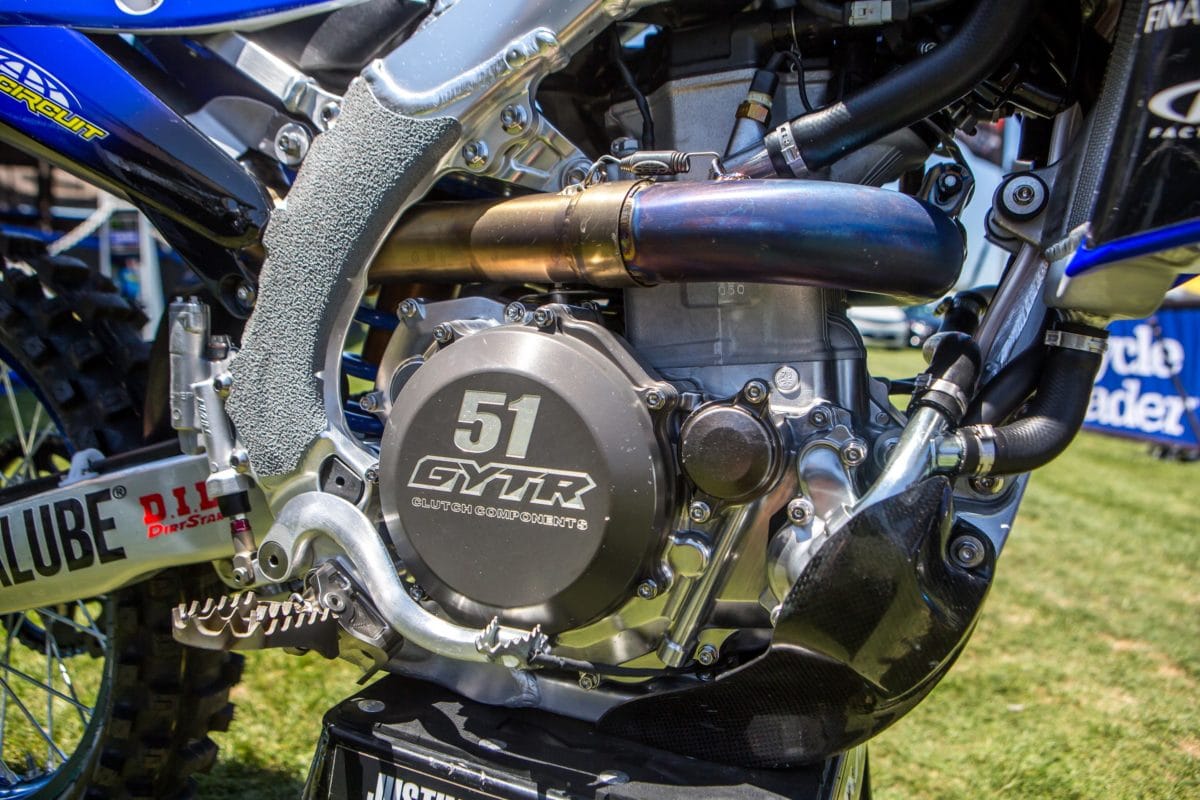 At the factory level motors are done in house or parts are sent in from Japan. The entire engine package stock was winner for the team this year. Grant explained that only minor changes were done and it saved the team a lot of time. GYTR covers were added and a little engine work. Grant told us he didn’t want to reveal all the secrets to us. All the riders on Yamaha have very different riding styles. The engine package stays the same but small adjustments will be in the mapping. It varies track to track and depends on dirt as well as design. 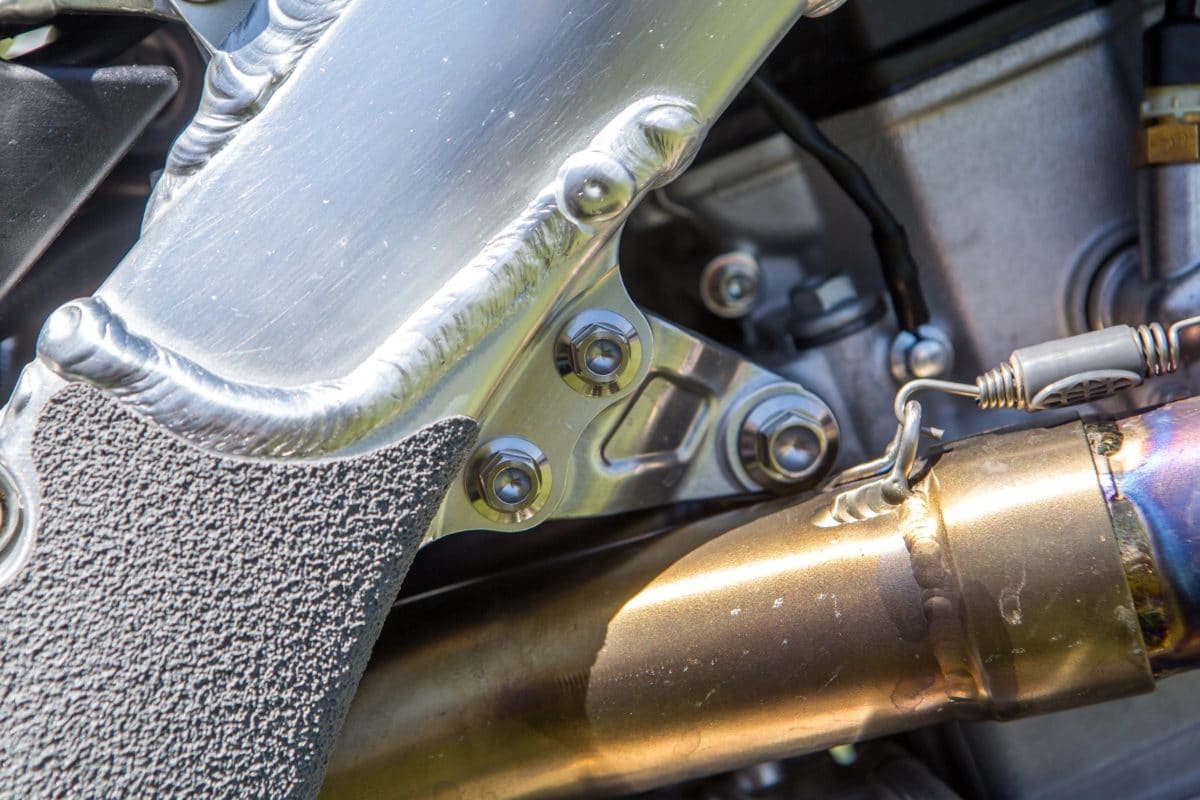 While we have seen other factory teams use unique engine hangars to change flex characteristics on the bike, Yamaha runs all OEM engine hangars. Frame tape is added for grip but not over done. You will only find it on the frame and not on the side plates. 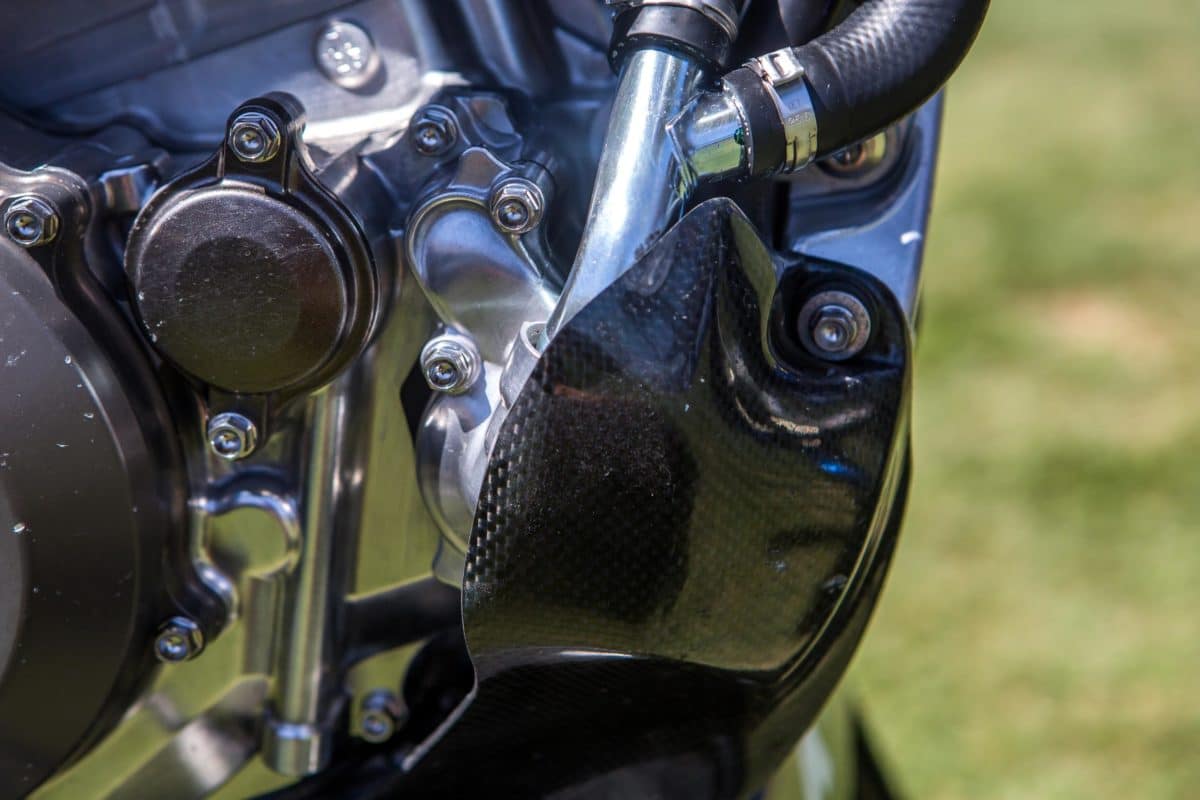 A carbon skid plate is added to Justin’s YZ450F made in house at Yamaha USA along with some other small protection pieces on the bike. 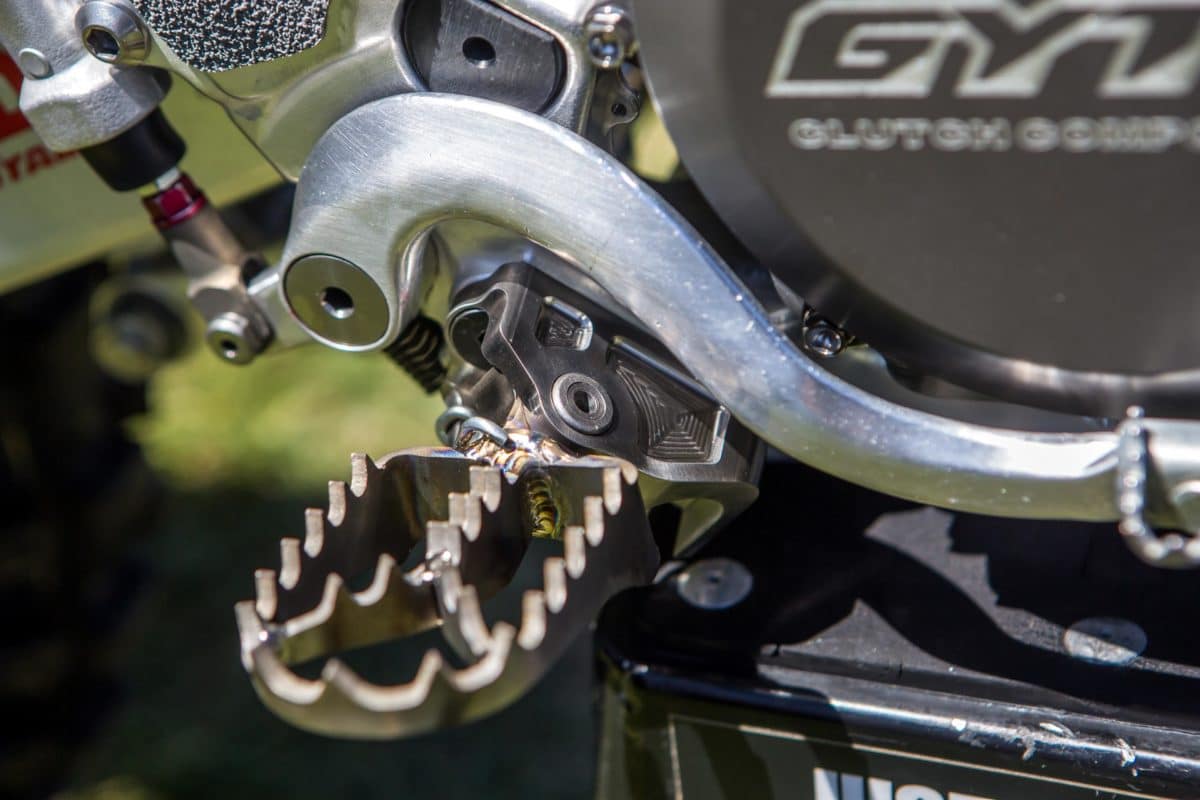 Foot controls for Justin have stayed pretty stock in position and in material. The stock rear brake pedal is modified a little with a different spring to give it more tension. A new item to the motorcycle is the in house built titanium foot pegs and mounts. They are designed to be light weight and clear dirt. A delron insert is added so no rocks or mud get stuck on the rear brake pedal. 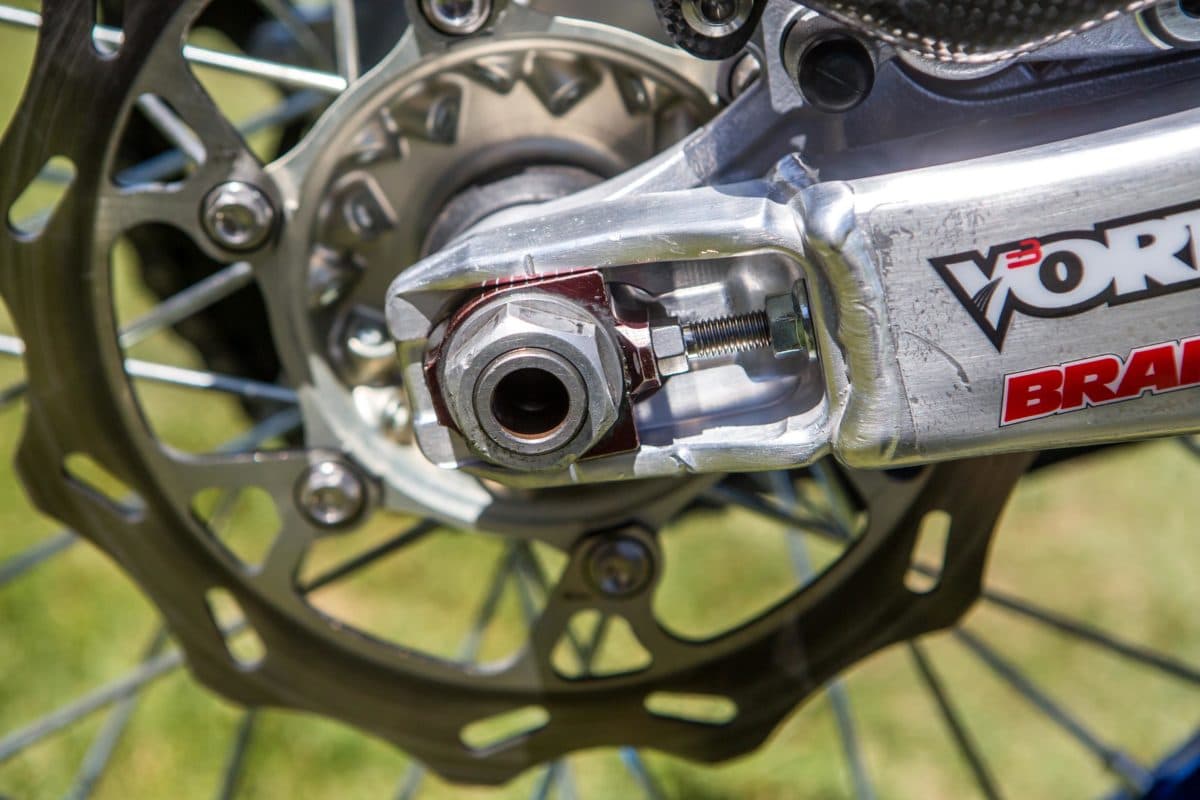 An OW works Yamaha rear axel is added that is steel and gold nitraded. Grant explained that this component is very strong and durable. The ability to change from titanium, steel, and aluminum is there for the team and is based on preference for the rider. 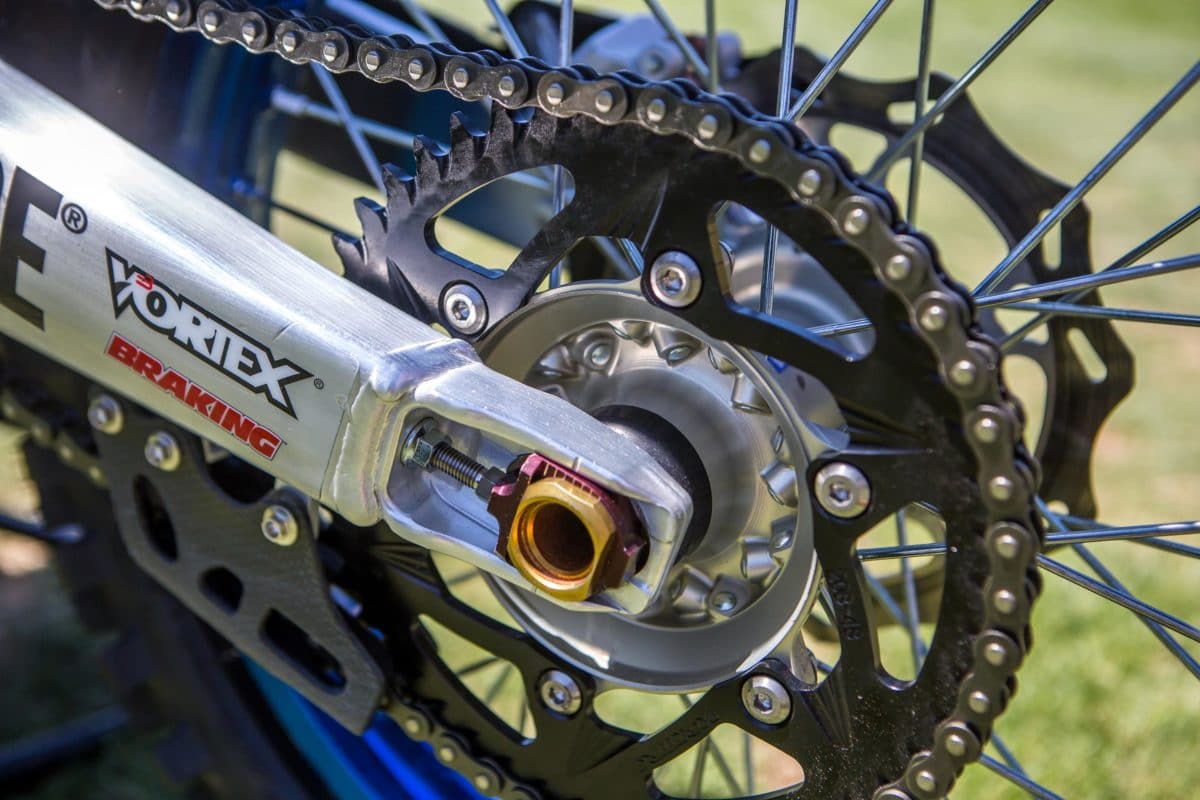 A DID chain and Vortex sprockets are used for the drive train. They pull the rear wheel far back to increase stability which helps in the whoops. 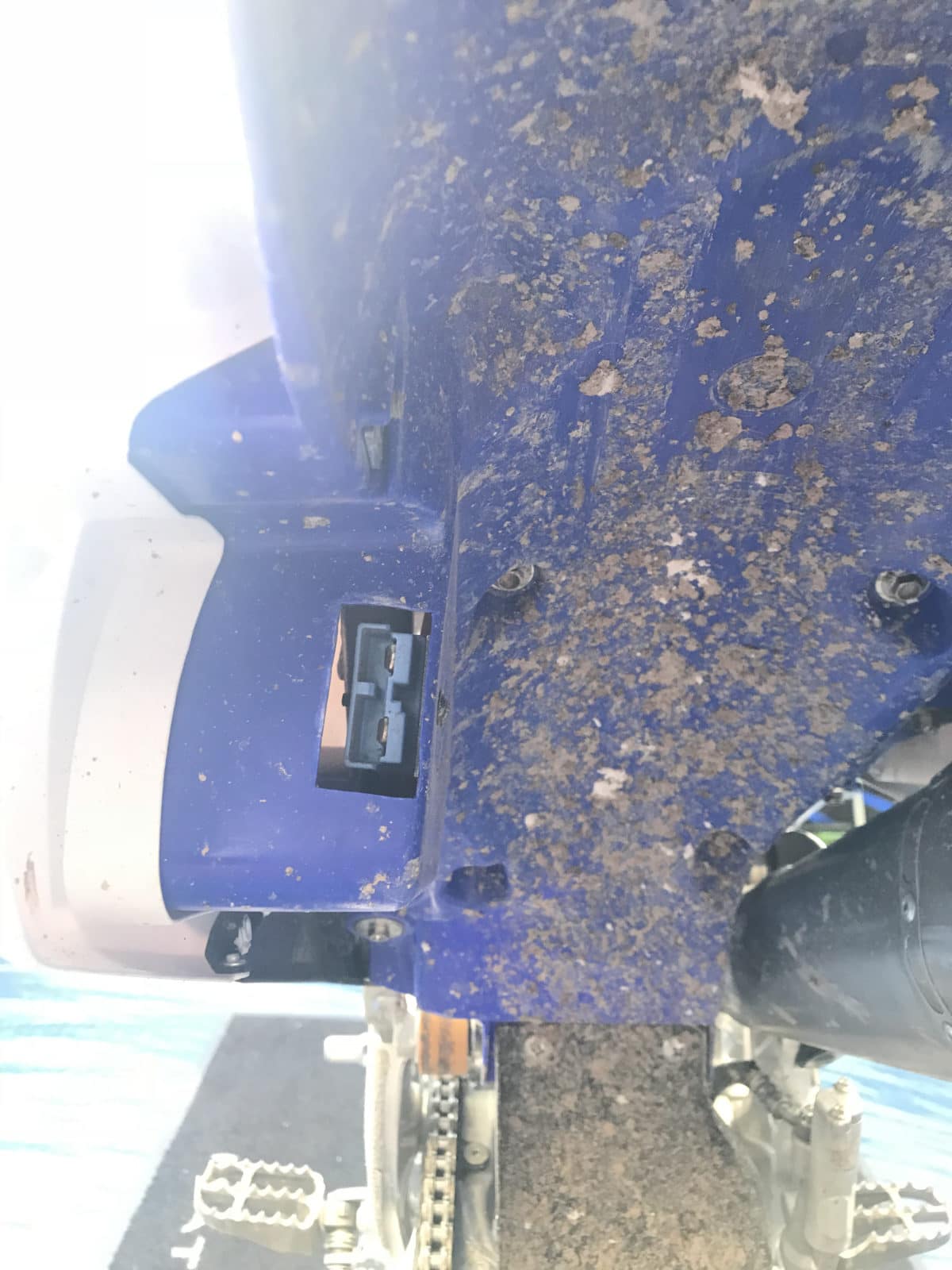 Something that caught our attention later in the day was this piece here that sits behind the number plates and rear fender. With the addition to electric start, Speed Cell has come on board to the Yamaha team. They have built specific batteries for the motorcycle. The team runs the port shown here as a safety precaution in the event of failure. The team has the ability to run auxiliary power to the bike and get it started if for some reason the main unit has been damaged. 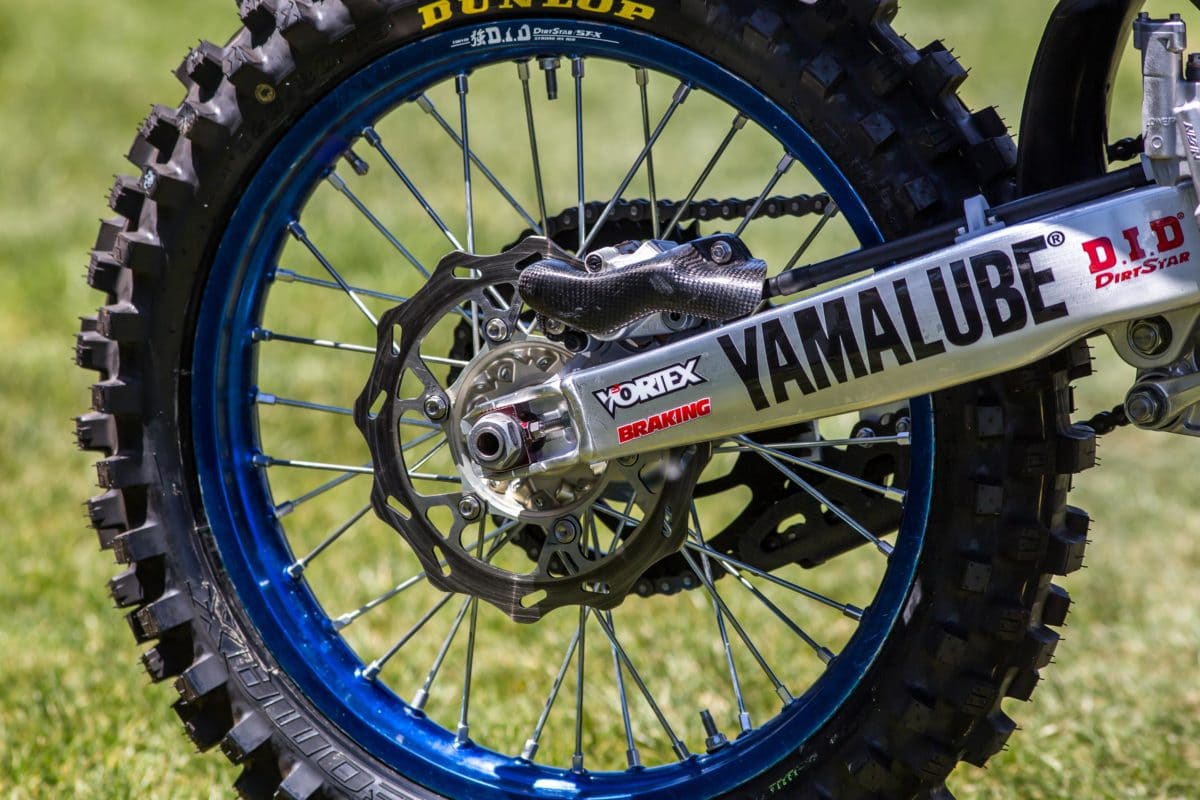 Justin has primarily stuck with the same tire combination all season. The rear is a little wider and flatter. He doesn’t like a very tall tire. This is actually a good tire for dry/hard packed conditions as Grant explained. Justin is hard on the rear brake but the system remains stock including the lines. The master cylinder is a works piece. 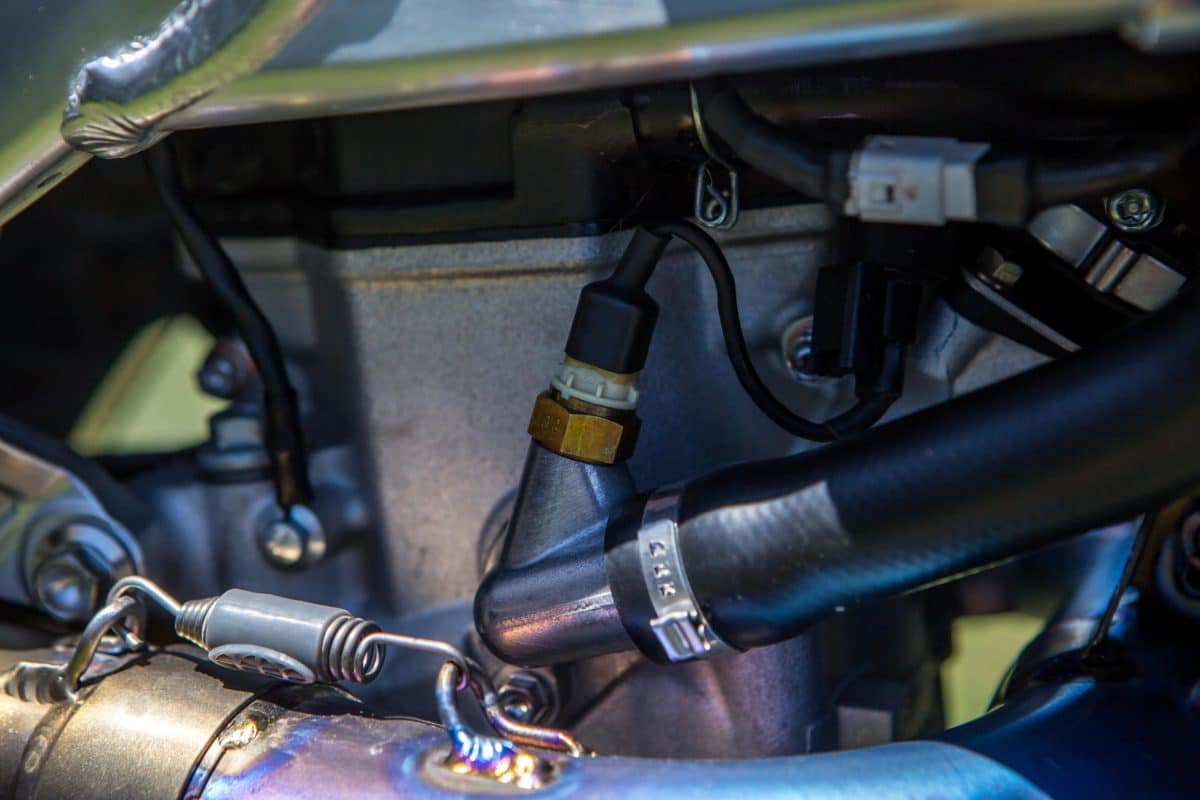 Along with the GET ecu a GET logger is added. The O2 sensor is running at all times. The logger also keeps an eye on the bikes OE sensors by plugging into the main harness. On the main harness minor modifications are done to make sure no wires are stressed or hard to get at. They want to have easy access to wires in the event of a possible mechanical issue. This sensor here is to keep an eye on coolant temperature. 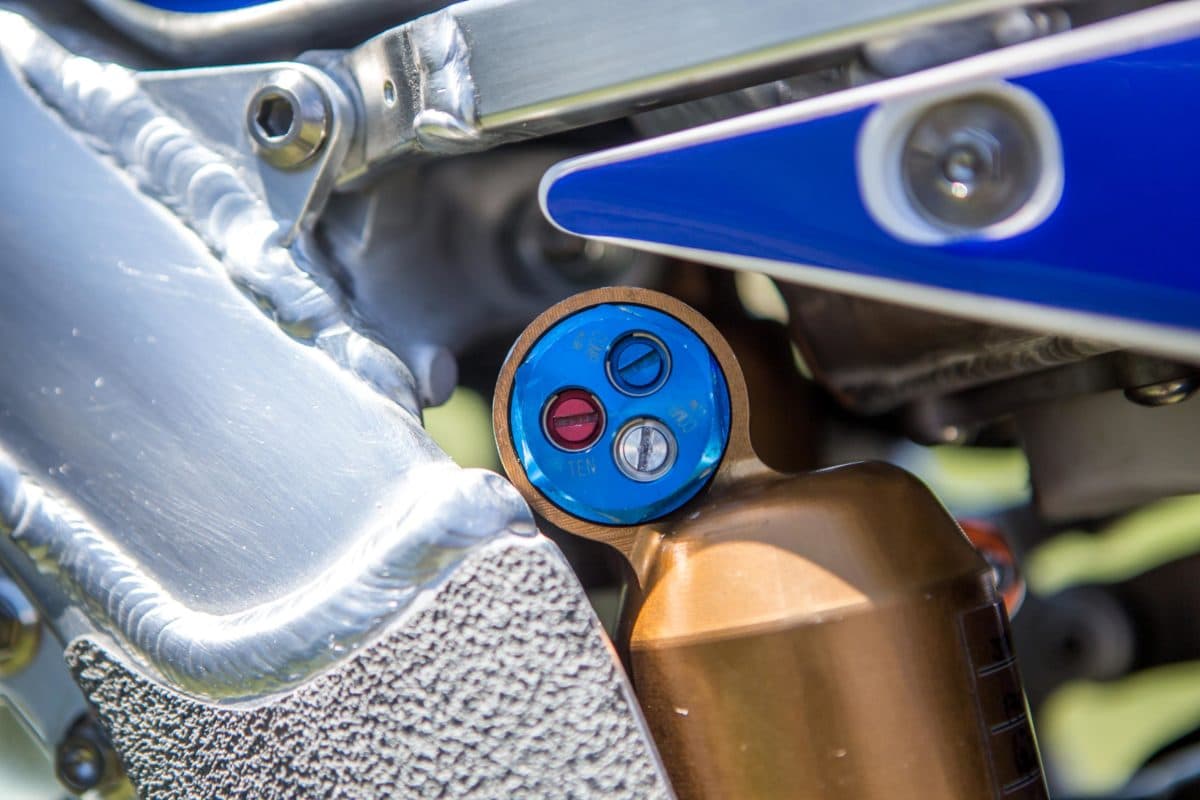 Stock linkage is the preference for the entire team. The factory KYB rear shock allows for the team to make adjustments to the length if need be. The rear shock also has high speed/low speed compression as well as high/low speed rebound. Grant explained that the rear shock has more options for tuning than ever before. Justin is more sensitive to a higher front end in the suspension department. 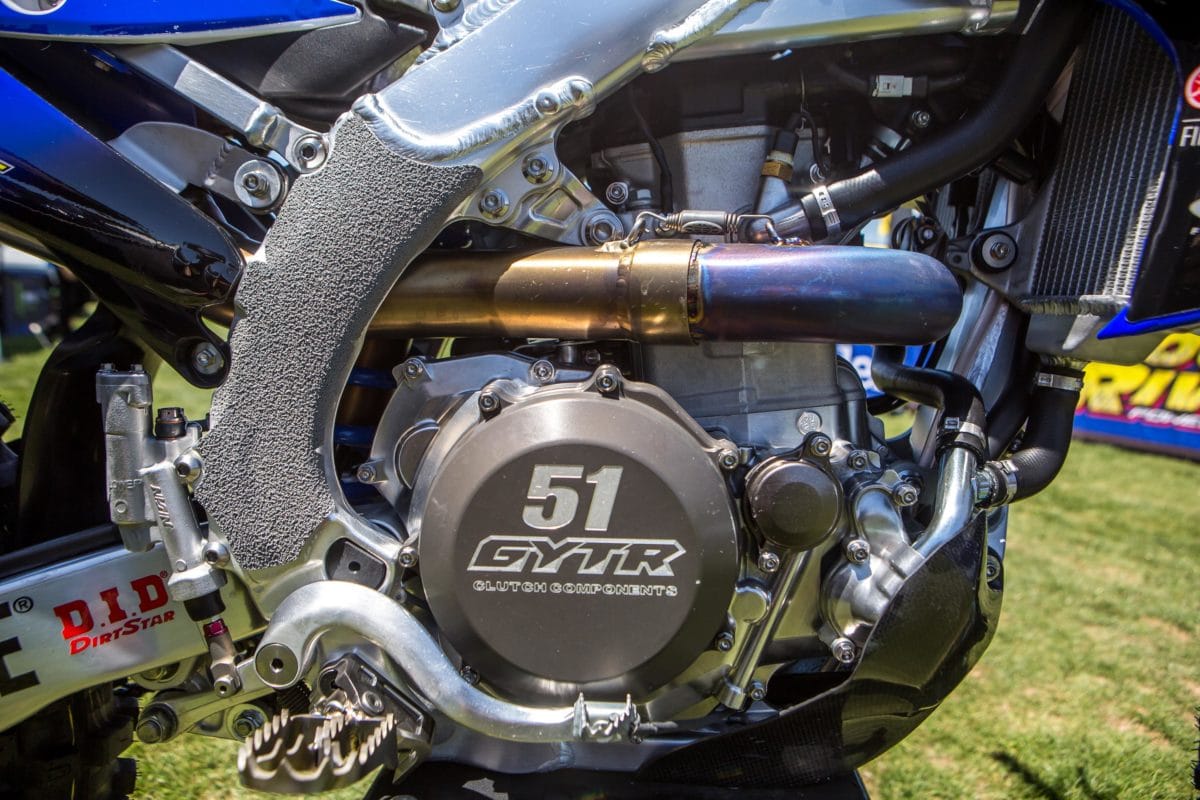 Justin does go through clutches quite often with his riding style. Now that the team has switched over to a hydraulic system they can change the amount of springs if need be and also have different plate combinations. 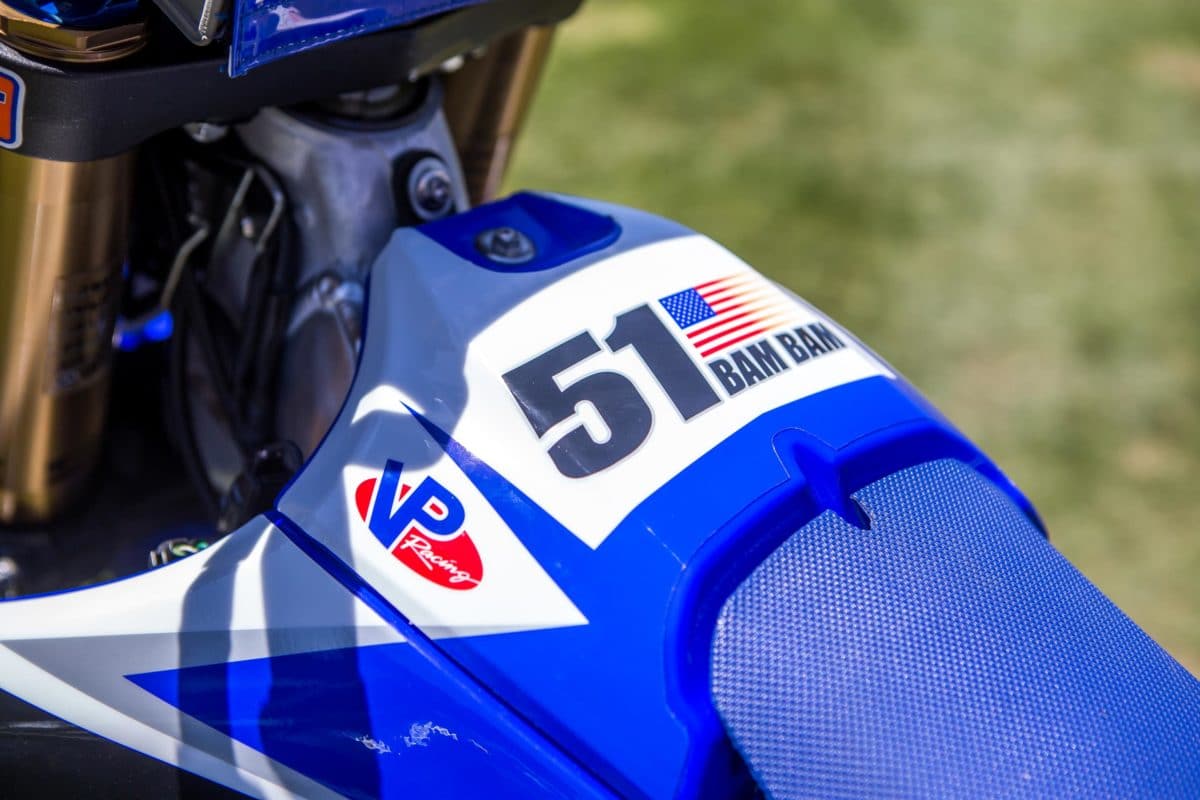 DT1 supplies the air filters on the #51 bike. They give the team multiple options to run depending on race environments. A thinner filter is used for Supercross that allows more airflow and increases power output.