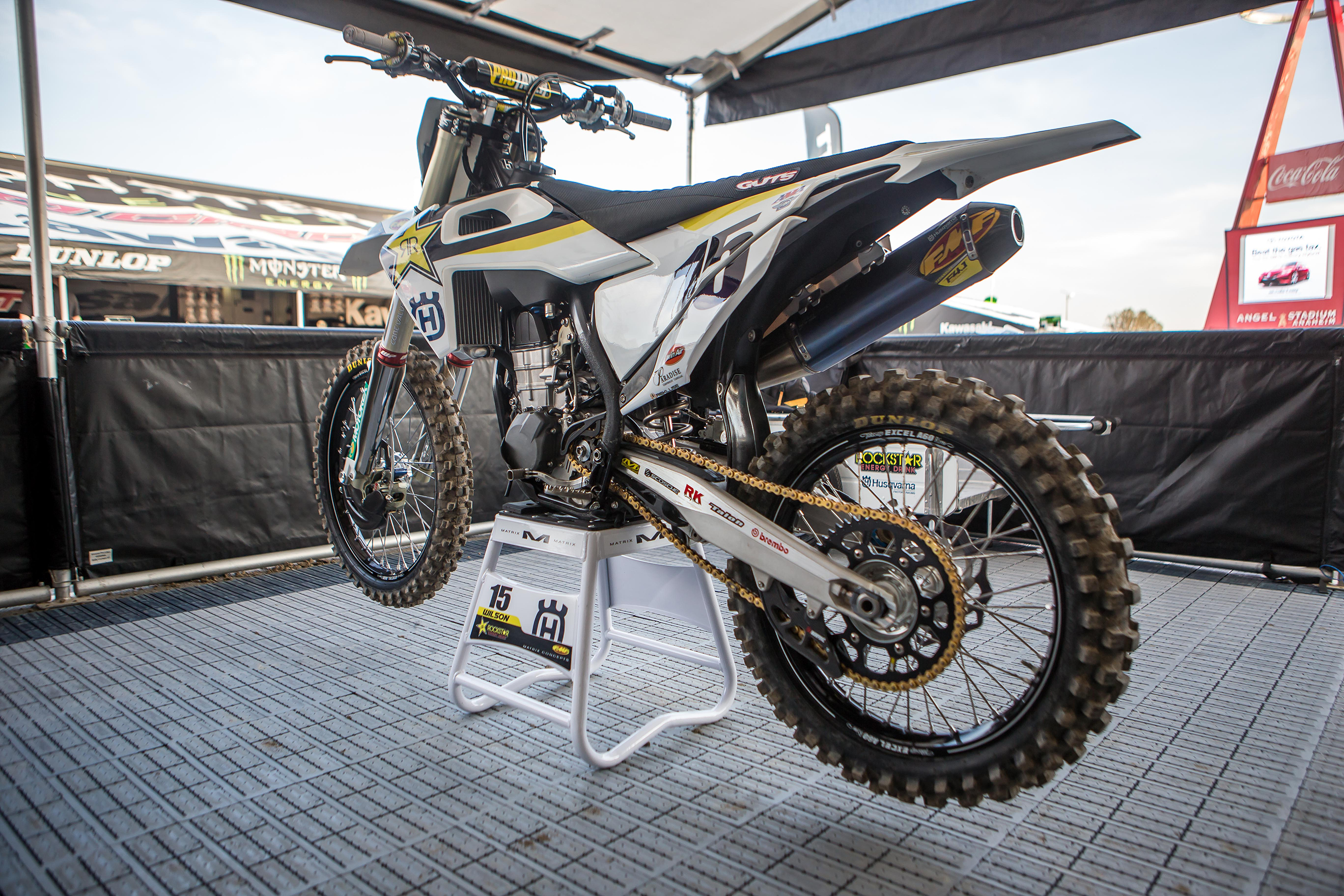 This time last year Dean Wilson was sitting in Anaheim with a box van, a bike on a budget, and no clue as to what his plans would be after a couple rounds of racing. By the time Oakland came around, Dean had picked up a ride at the Rockstar Racing Husqvarna team. Now in his sophmore year with the team, Dean is eager to put his Rockstar Edition FC450 on the podium and run with the fastest in the 450 class. We caught up with his mechanic Daniel Castloo to see how Dean has adjusted to the new model. Here is what he had to say…. 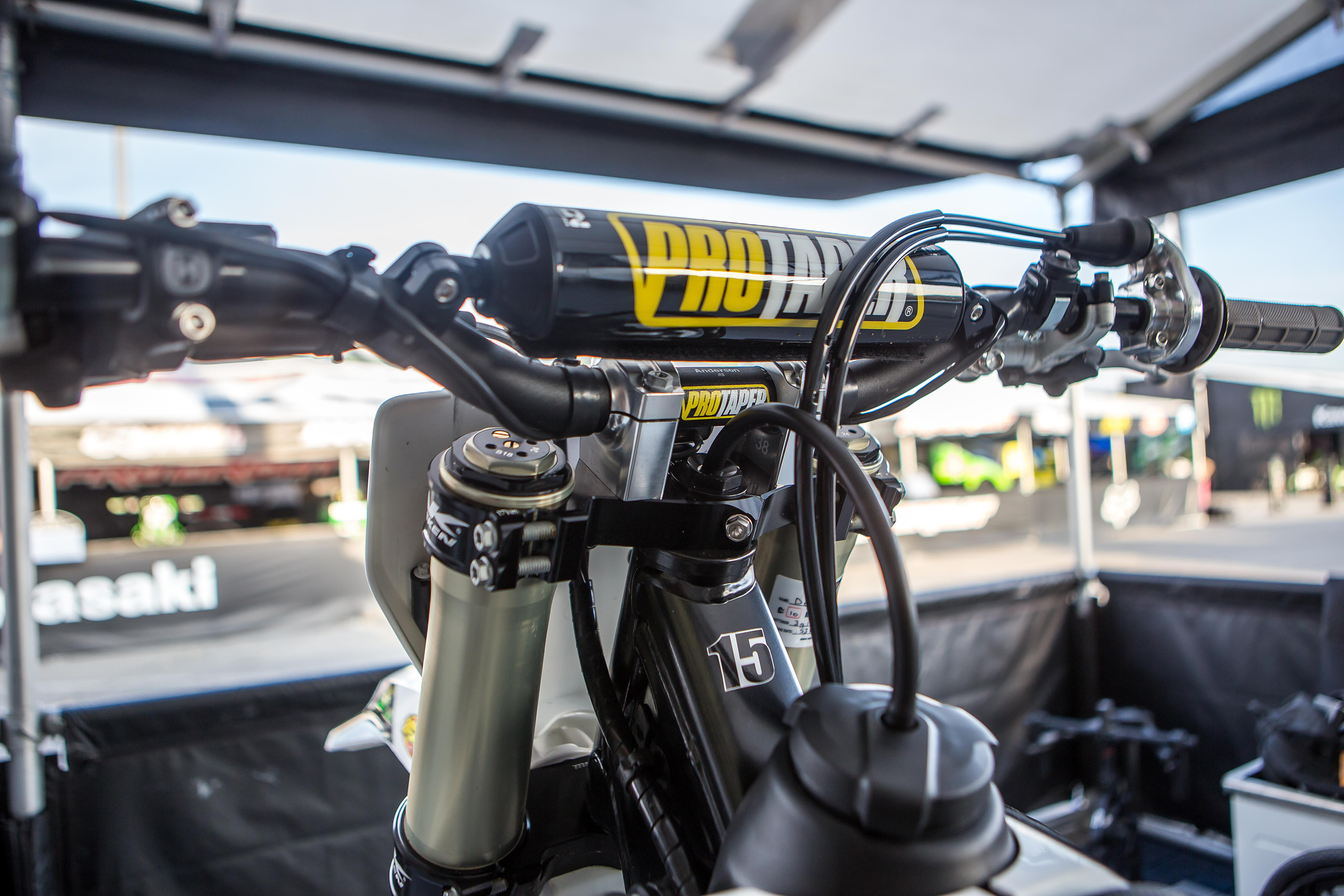 Dean and the rest of the Husqvarna team run a Pro Taper bar but differ in heights as well as bends. The funny part here is that the bend on Dean’s bike is an Anderson bend. 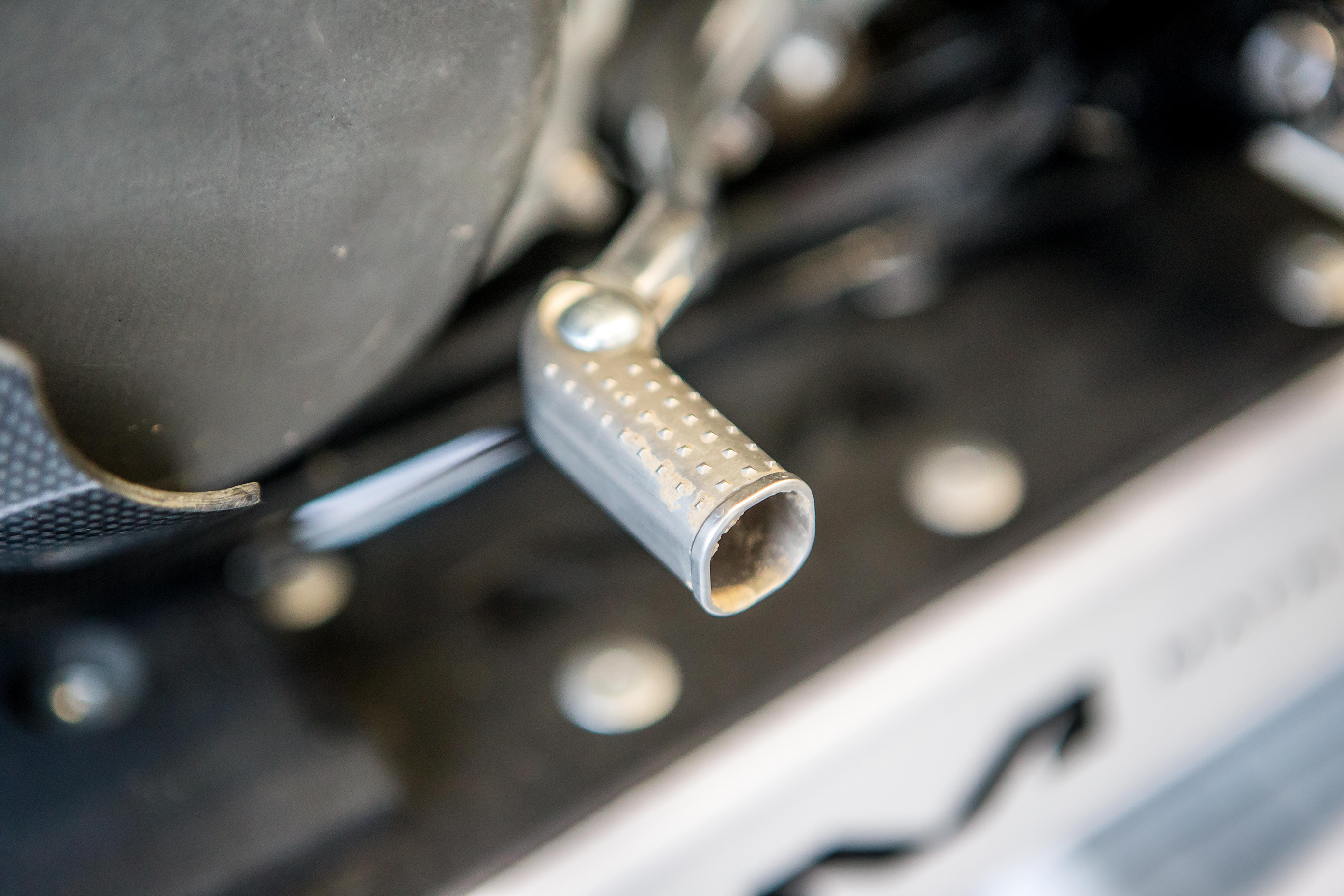 Factory? No. Anything special? No. That’s right…bone stock. It is surprising how many stock pieces the Husky team is running. Daniel explained that the package is so good stock, why would they try to re-invent the wheel on components they know work well? 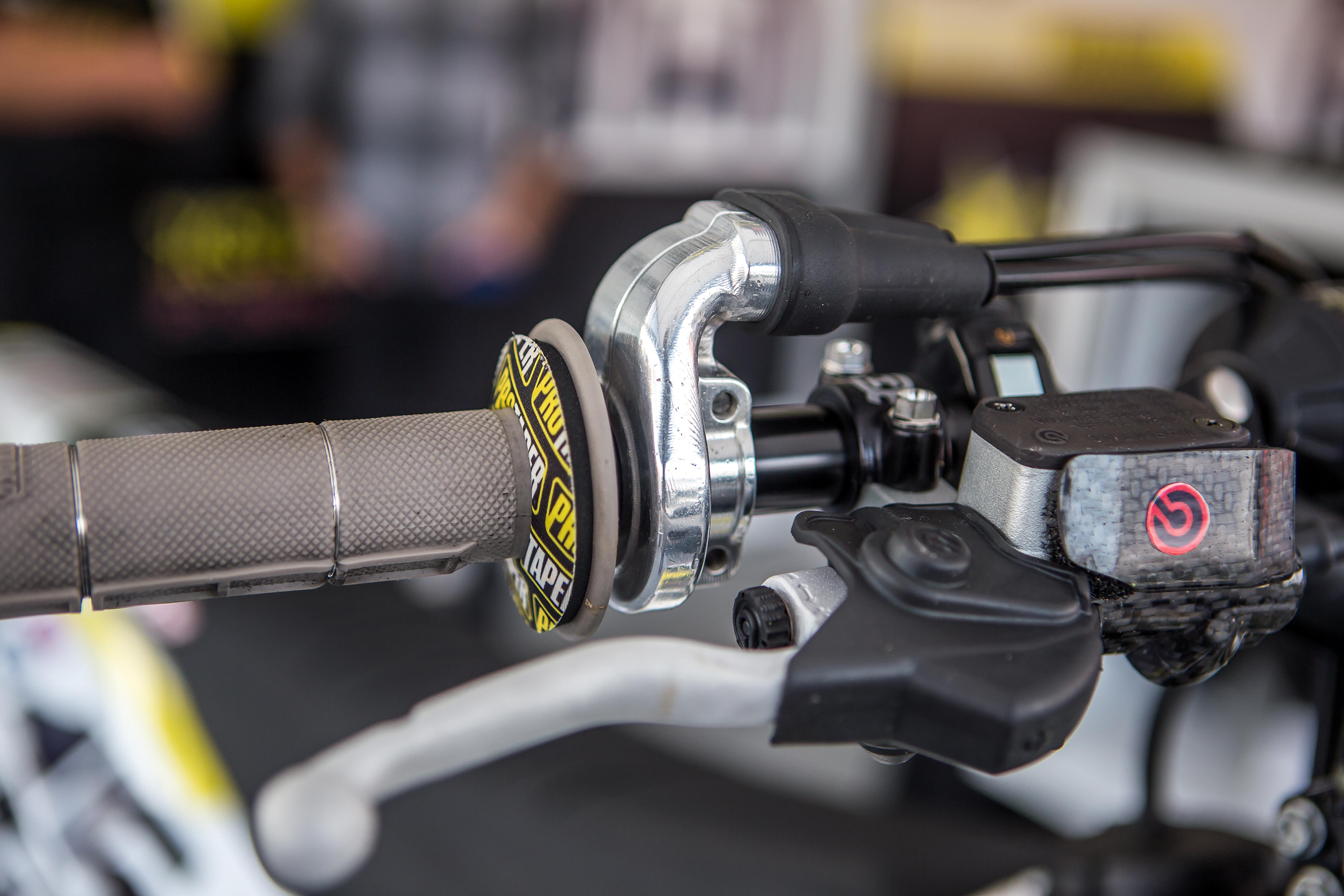 A very interesting piece to Dean’s bike is the throttle tube. The team worked on having a throttle tube configured a little so Dean doesn’t have to twist as far down to get more power. They wanted to help Dean , because of his size, not have to sacrifice his posture for more power while racing. 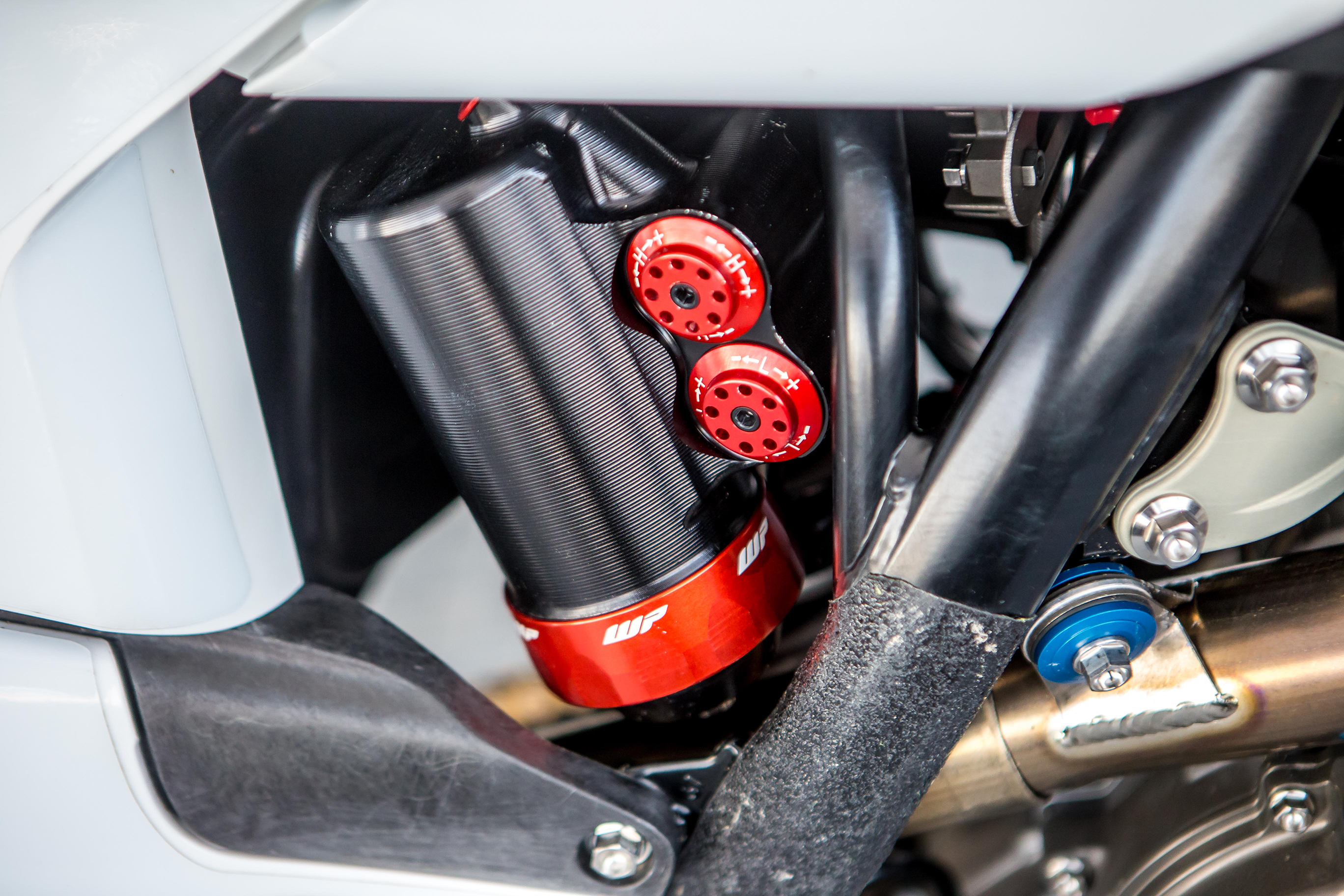 Some eye candy of the WP suspension out back on Dean’s bike. 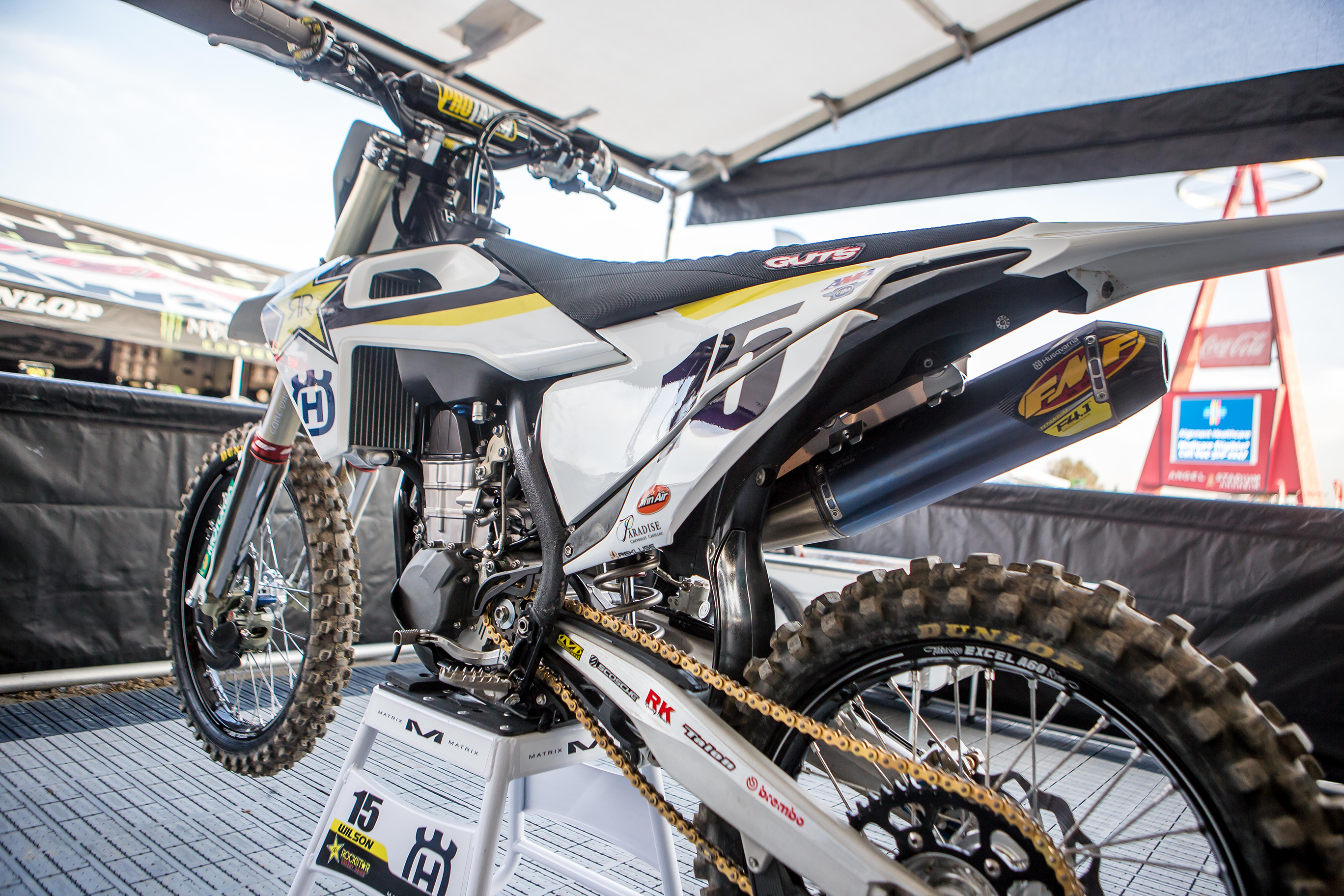 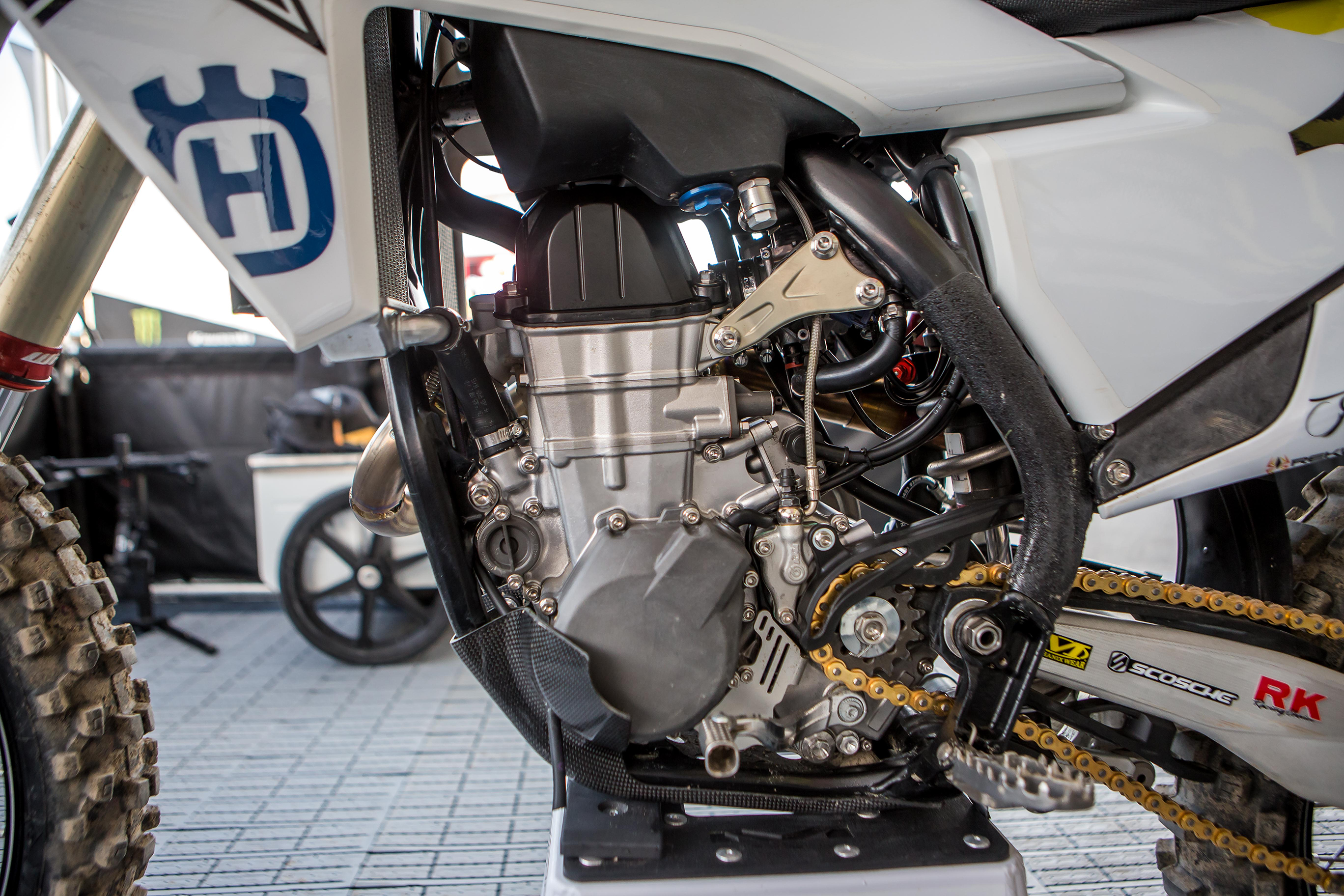 The motor is done in house by Factory Services. The week leading into Anaheim the riders tried out the bikes after making requests on how they wanted the motor to feel. The riders responded by saying it was exactly what they wanted. Their goal was to make a bike rideable with a lot of power. Sometimes that is a very hard task to obtain or combine. 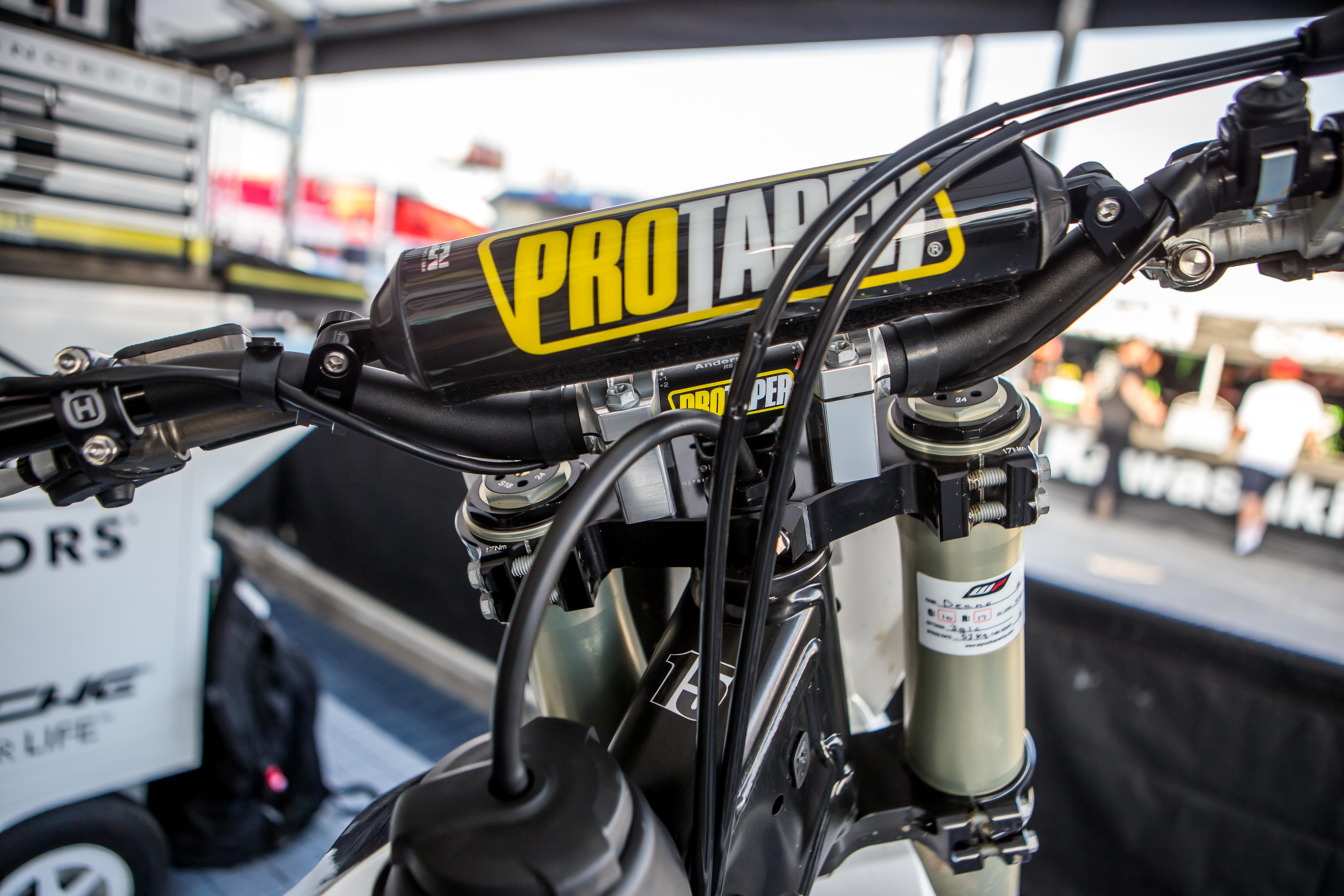 You will notice in Dean’s cockpit that he has much taller bar mounts. That is simply to help give me a little bit more room because of his size. This is a much larger cock pit for Dean than say a Zach Osborne who typically runs his bars really low. 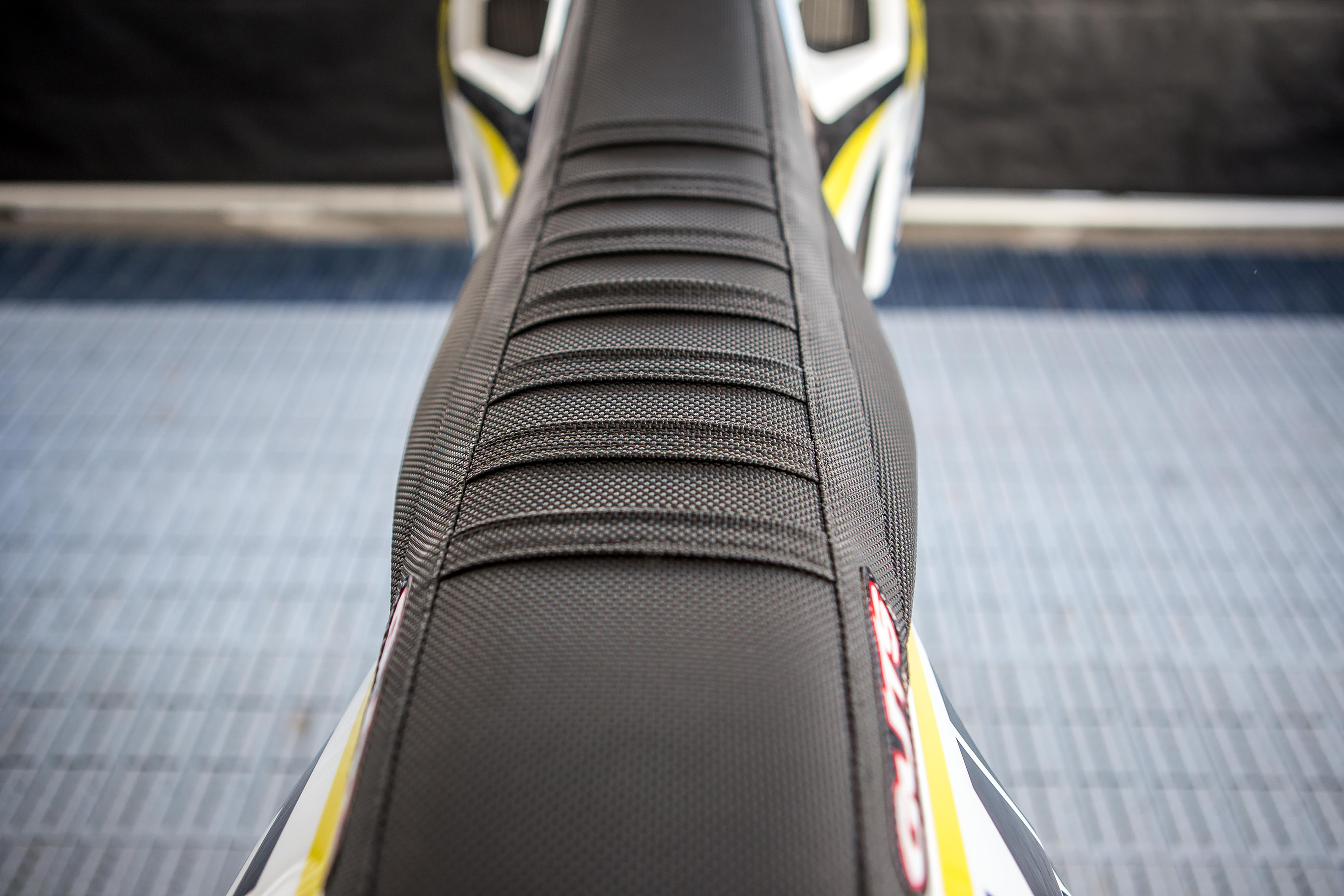 We definitely did a double take while looking at the Guts seat on Deano’s bike. The Guts seat is a wide seat cover but the actual foam inside is the stock foam from Husqvarna. There is foam that has been sewn in tabs of  on each side. But why would you do that? Because Dean is taller, this gives his legs somewhere to latch onto in different parts of the track. For example the whoops or the downside of a jump where he has to accelerate quickly. The contact patches for athletes differ so much because of each riders’ size and where their legs meet up on the motorcycle. 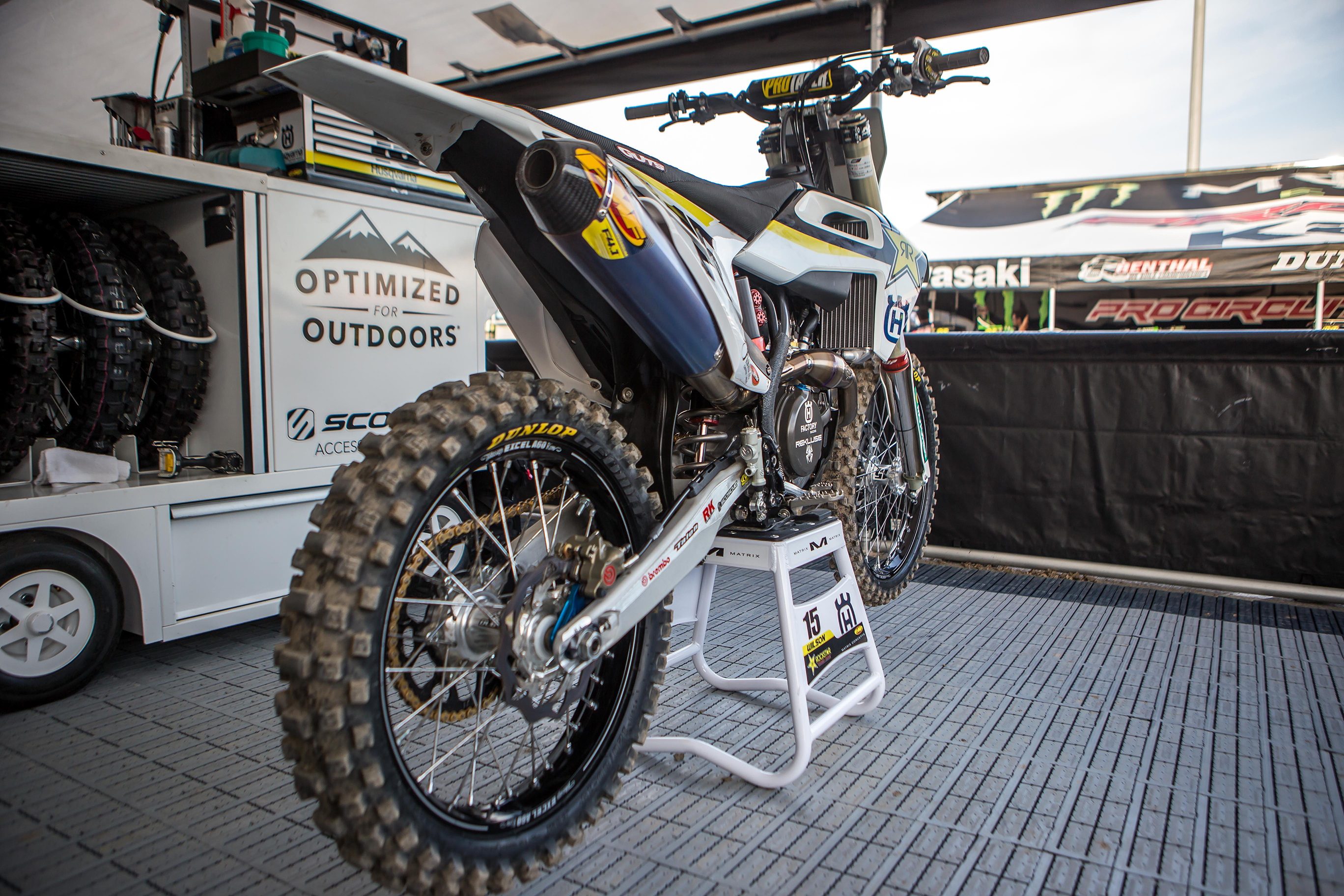 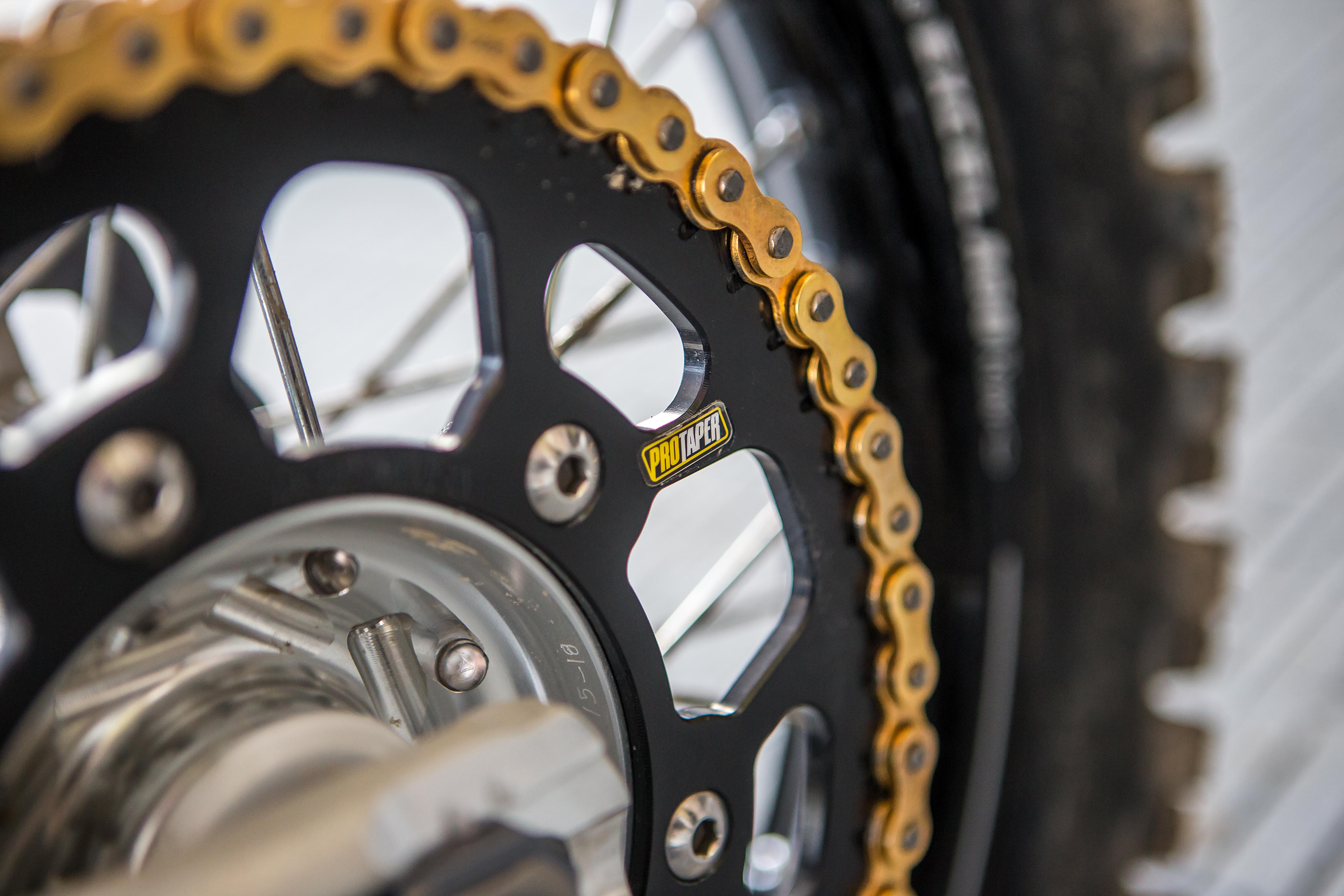 In the drive train, Pro Taper Sprockets with RK chain are used on the #15 bike. Daniel explained that Dean runs a neutral gearing and nothing crazy. He doesn’t want the power to be super violent or hit too hard. He stays away from adding a lot of teeth or changing things that will make the bike too jerky. 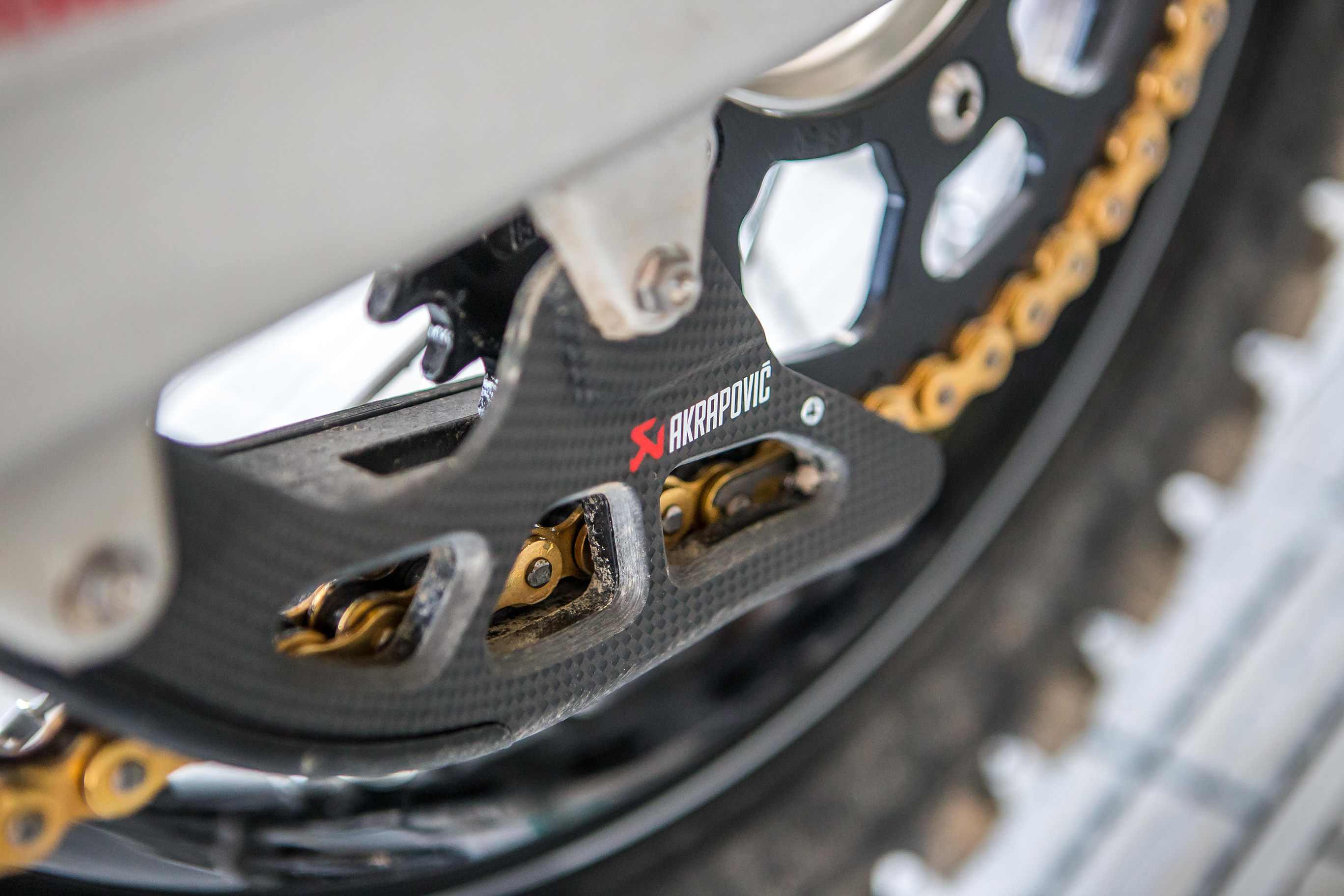 Akrapovic provides several protection pieces on the motorcycle like this chain guide here and the skid plate. Castloo explained that the skid plate is actually way more important than some think. Coming up short on a jump or going deep into the whoops can cause a lot of damage to the cases if hit hard enough. The skid plate is just a way of making sure that doesn’t happen and the racer finishes each night. FMF had to develop an all new exhaust because of Husqvarna’s update to the motorcycle. They also gave the team some options to choose from. Sometimes little changes can be done just with the exhaust and FMF provides those components to make smaller changes and make the bike feel different. The entire team has a great relationship with FMF and both worked on a package that worked for their race bikes. 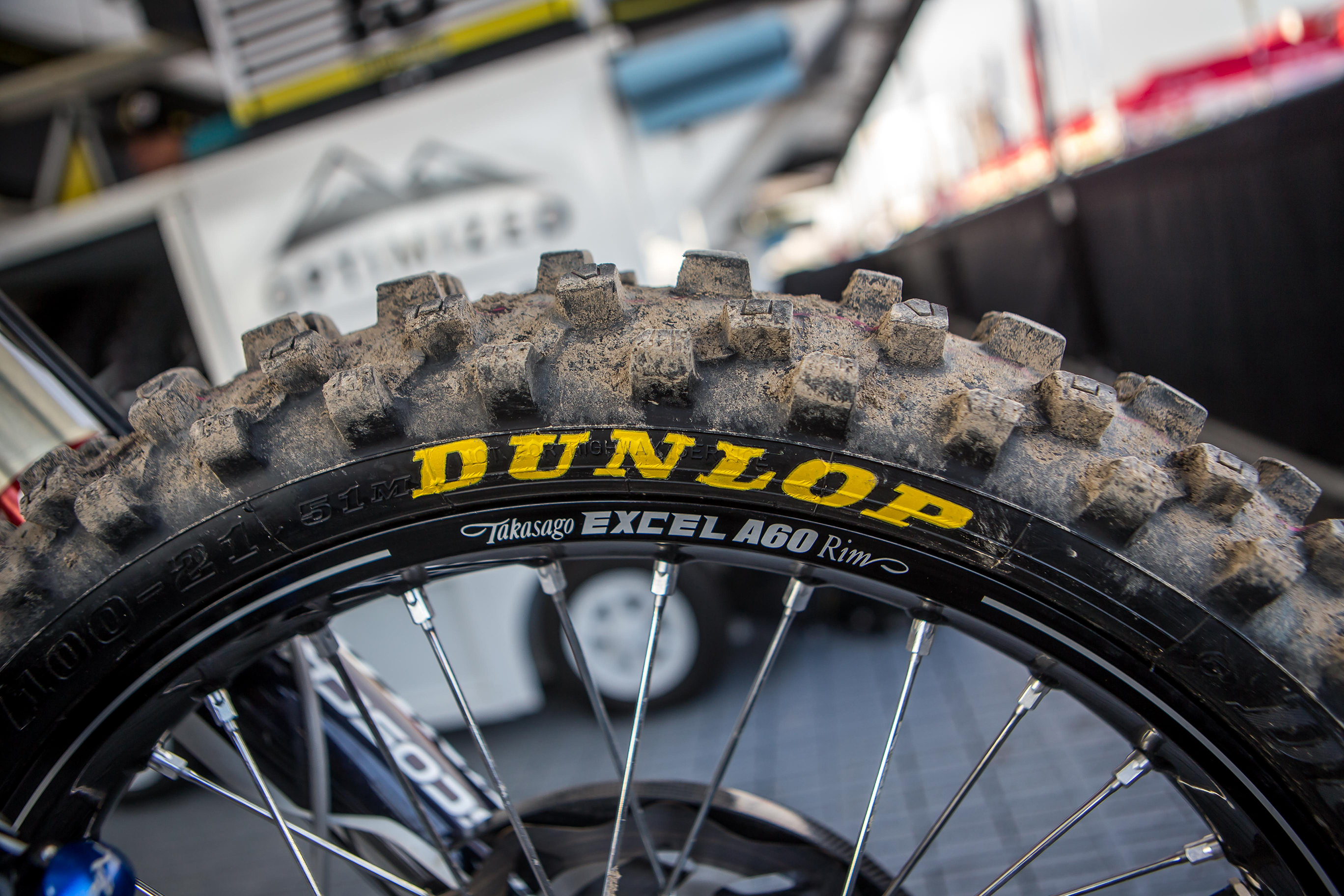 A factory tire… and a different factory front tire for Dean over last year. Dunlop was able to hook up with Dean and work on something he felt more comfortable with in the off season. Tires like these are returned back to Dunlop and a ton of data is collected from the team so one day guys like you and me can ride on something even better than what we have now. To add a little more stopping power up front for supercross, a 270mm front Galfer rotor was put on. Dean likes a touchy brake but also likes it progressive so he can drag it a bit. 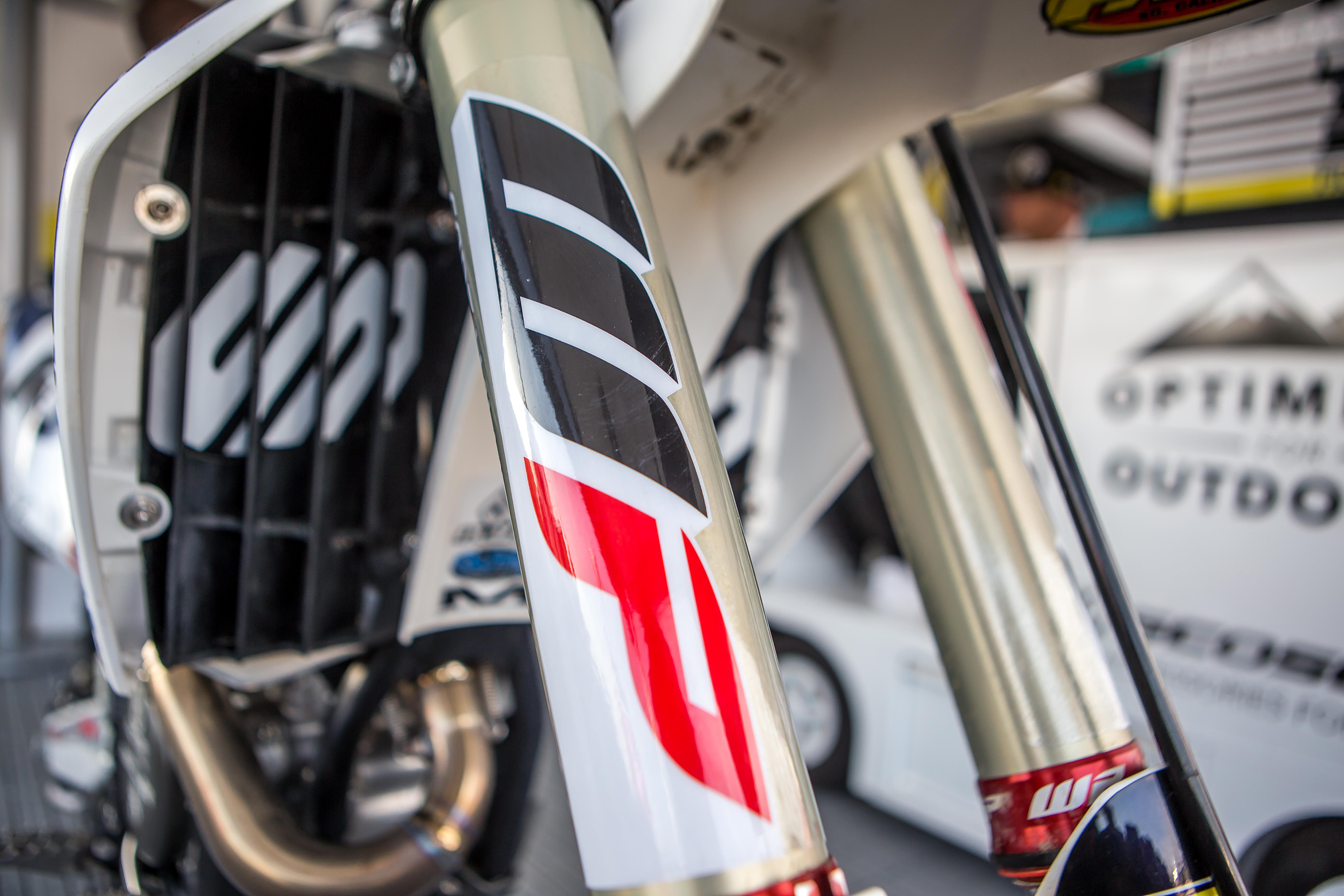 These are the same WP 52mm Front Forks that were run last year but with spec changes to better suit the Rockstar Edition model. The entire chassis of the motorcycle was changed for 2018 and WP was able to find a setting that complemented the new power plant and feel of the new model. 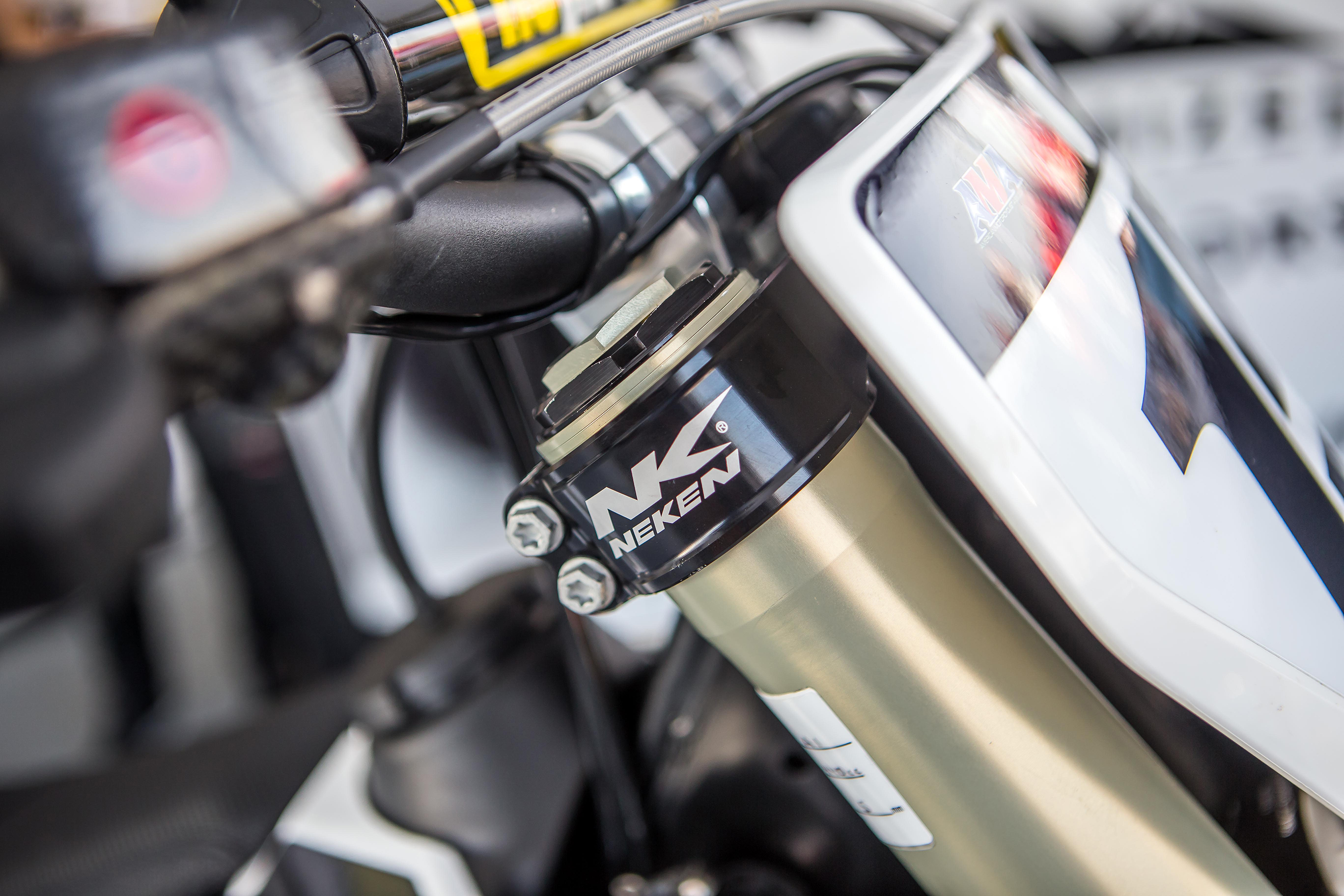 Neken provides the triple clamps on Dean’s FC450. He runs a standard offset triple clamp with options to change if needed. Factory Brembo brake components with carbon guards to protect both clutch and front brake. Last outdoor season they got some dings and wanted to reduce the risk of problems in a race environment. Daniel calls it preventive maintenance. Rekluse clutches are new for 2018 and the team is pleased so far with their performance. There are a couple options for the guys to choose from but Dean tends to stick with the standard set up. 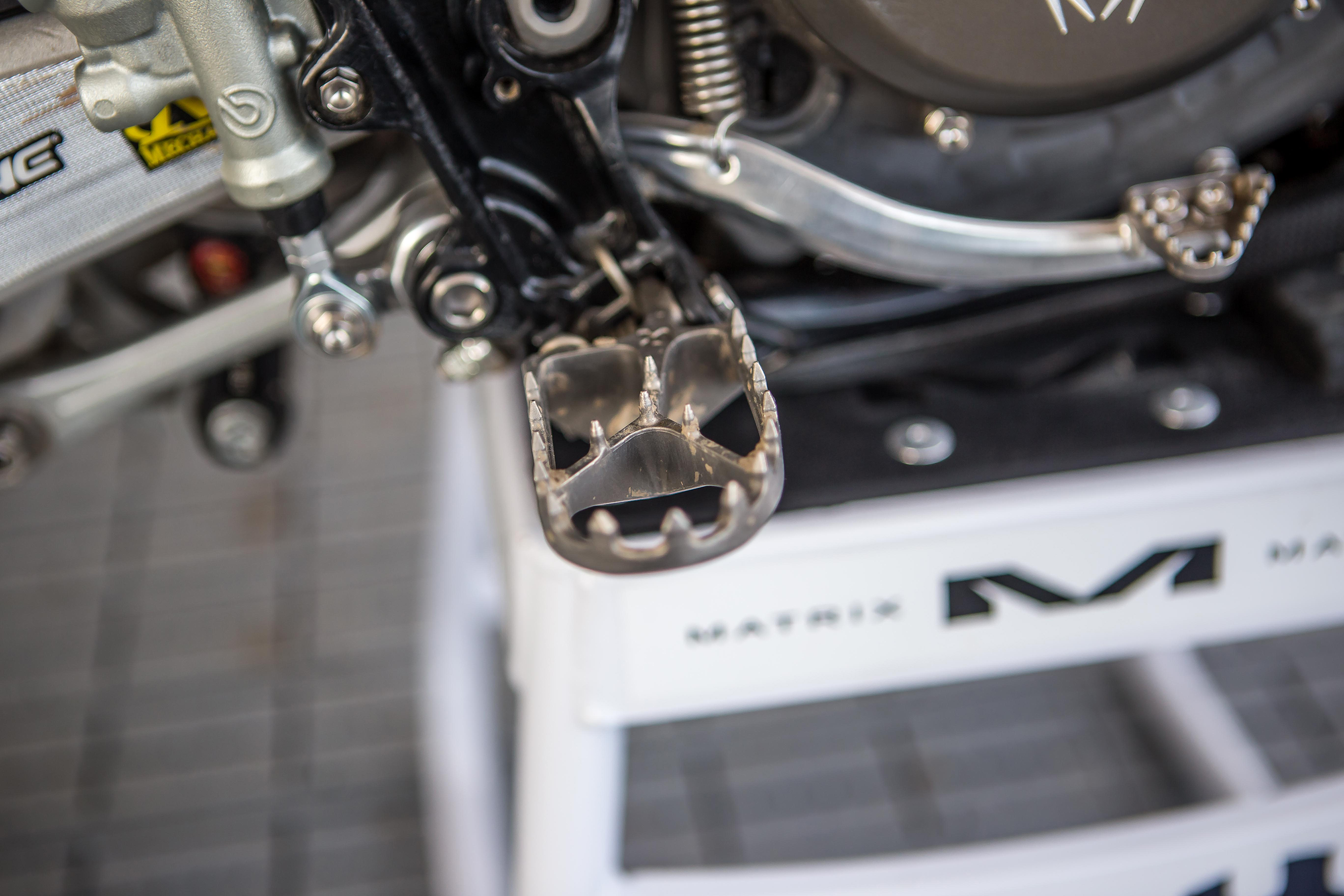 Dean went back and forth on foot pegs but ultimately chose to go back to the stock set. He wanted something with a little bit more feel and wanted to feel planted. The stock pegs offered on the current Rockstar Edition model turned out to be the winner. You can spend hours geeking out on these motorcycles. Notice the site hole has a slit in it. This another preventative protection measure taken by the team to reduce the risk of malfunction during the race. The slit allows the mechanic to see oil levels in the motor but also protects the glass eye hole from being penetrated by rocks or larger debris. Believe it or not the team is using the stock sub frame. Daniel explained that the current model sub frame gave dean a good feel for the rear end. It has more flex and give the rider more rear end traction feel. Dean’s FC450 is equipped with Excel Rims and Talon Hubs. The team build their own wheels in house at Husqvarna.