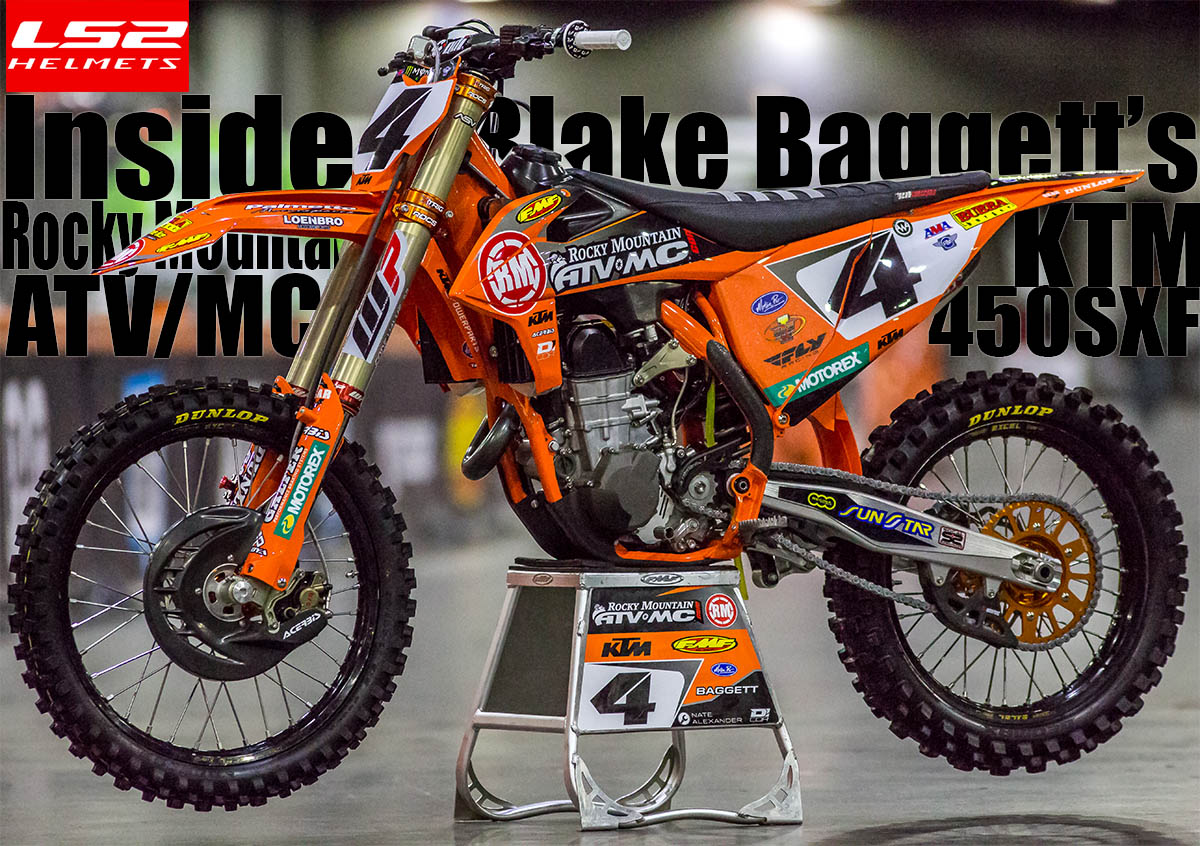 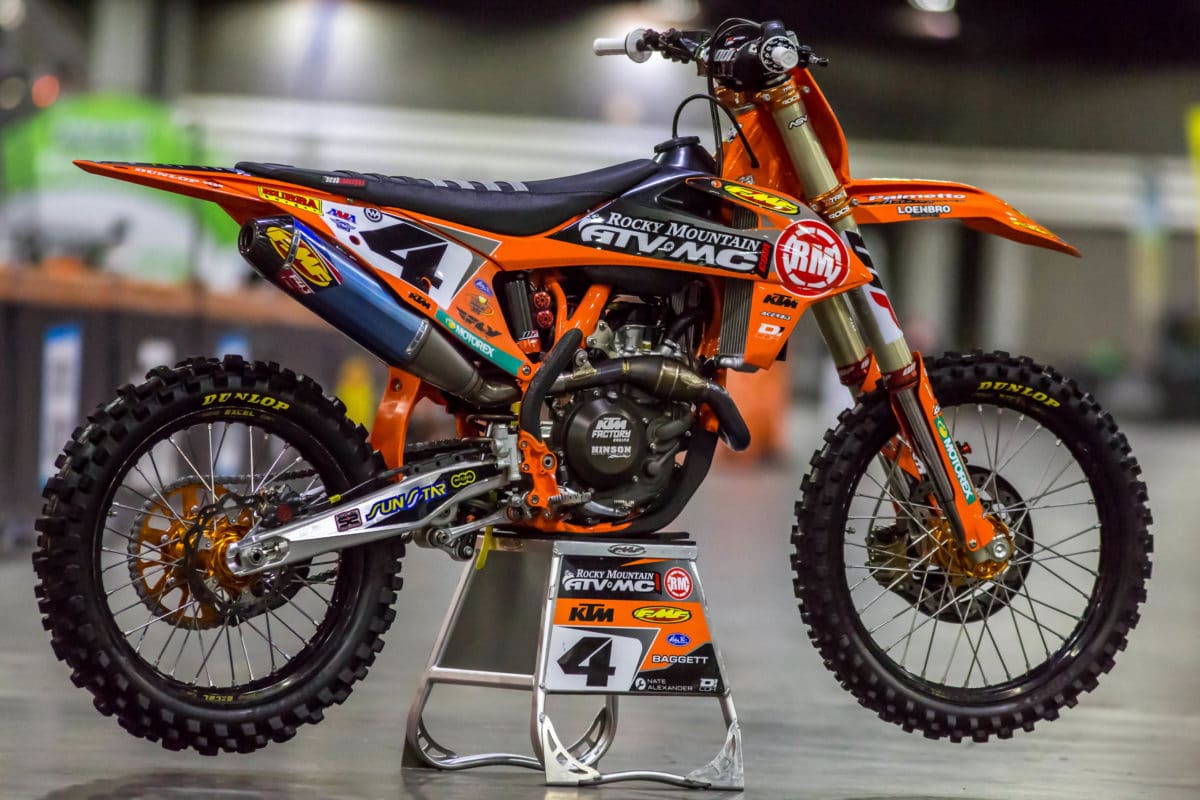 We caught up with mechanic Nathan Alexander under the tents of Factory Rocky Mountain/ATVMC to get an in-depth look at Blake Baggett’s KTM 450SXF prior to Saturday night in Atlanta. This bike is littered with factory components from KTM, but closer to stock than you may think when passing by. 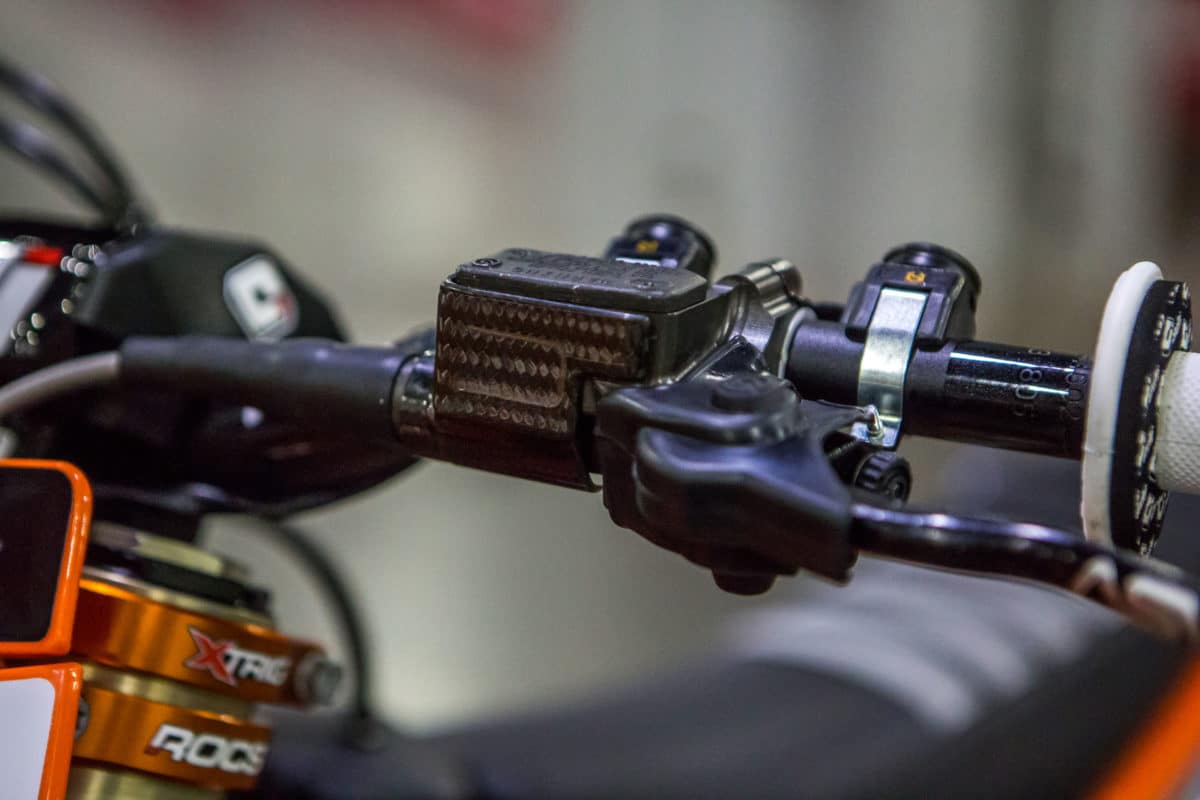 Right out of the gate we noticed a lot going on in the controls. Blake’s bike caught our eye as this was one of the most unique set ups we have seen this season. Beyond the carbon protection for roost or debris on the factory master cylinder, his levers are positioned much different than your typical race bike. Nathan described that he positions the brake side lever inward 220mm while the clutch is pushed in 210mm. This is usually the starting point before they make subtle changes. The ODI handlebars are slightly pulled back with a McGrath bend, but the position does change from track to track. 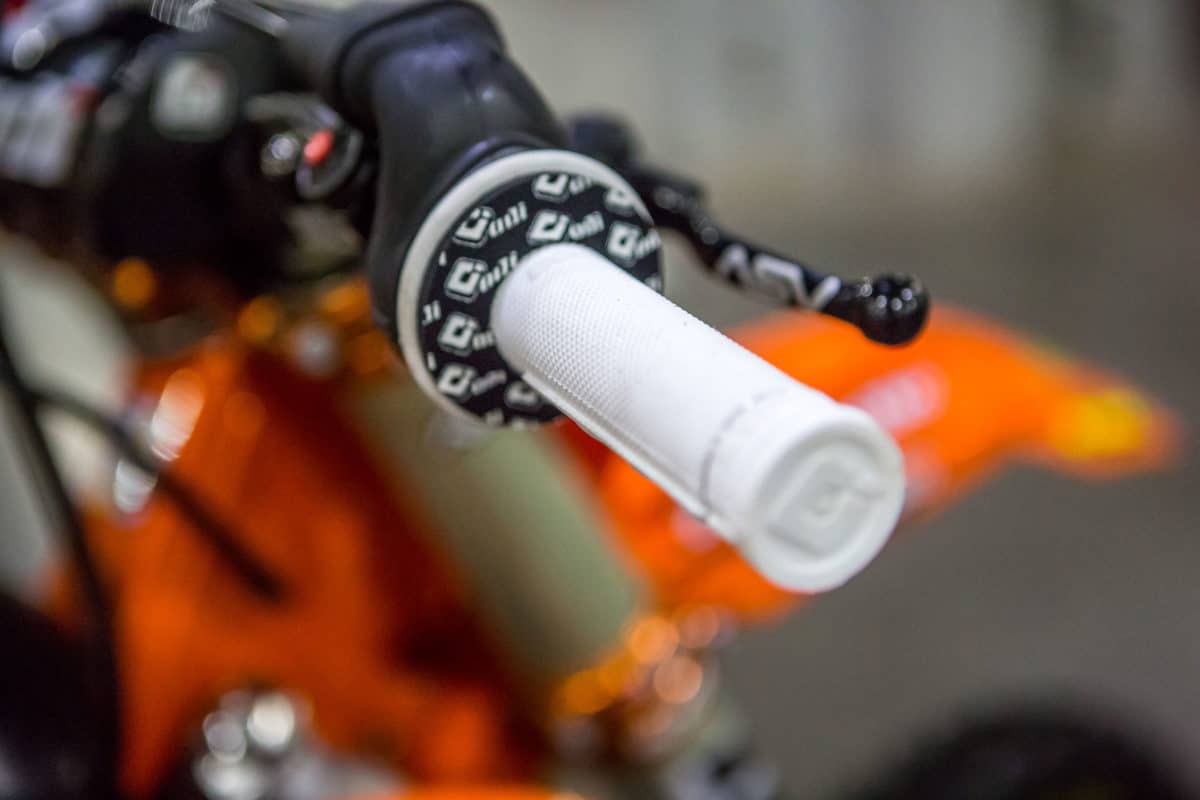 ODI also supplies the throttle tube and grips. Although we are used to seeing the Factory Edition in stock trim with lock-on grips, the team prefers to use the more standard glue-on style instead. You are probably wondering why in the heck they are running white grips. ODI’s softest grip comes in white, so that’s what they run. The throttle play is very very small if any at all. Nathan went on to tell us that he will continue to adjust the play in the throttle as the day continues. 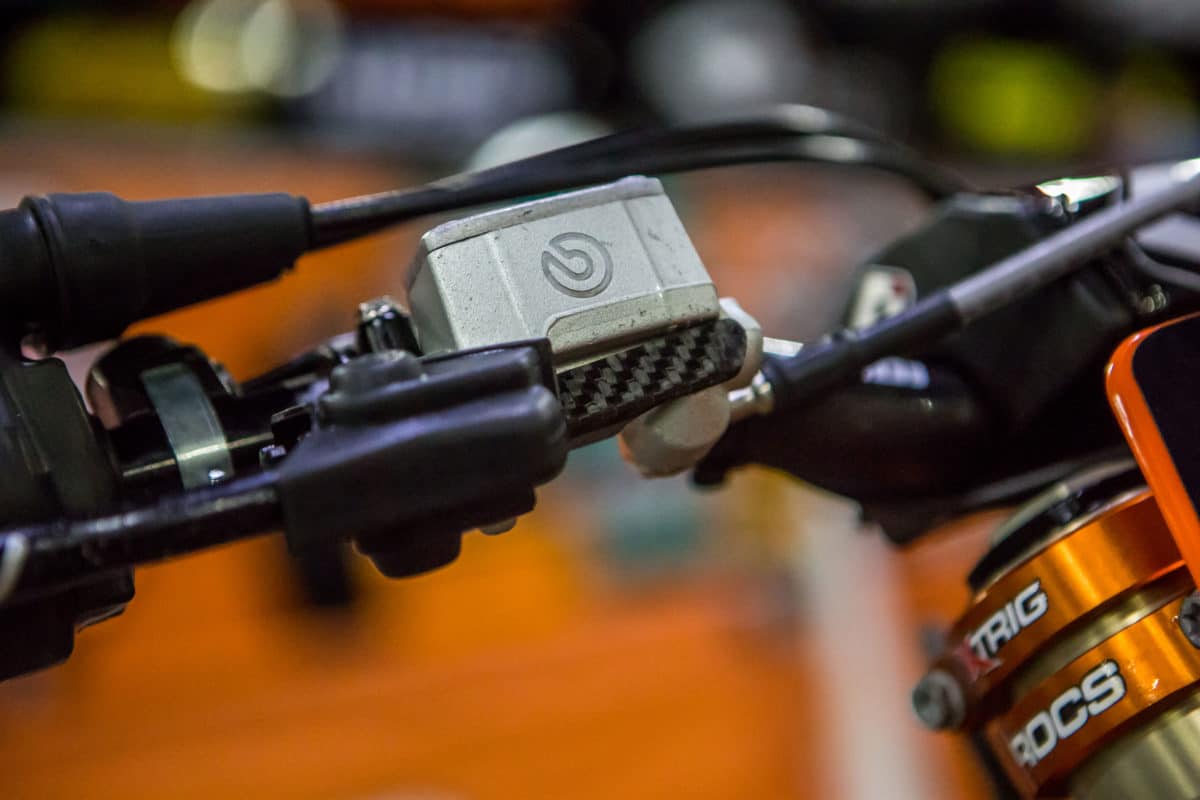 You’ll find more carbon protection on the factory master cylinder side of the Brembo front brake. The brake lines are OEM. 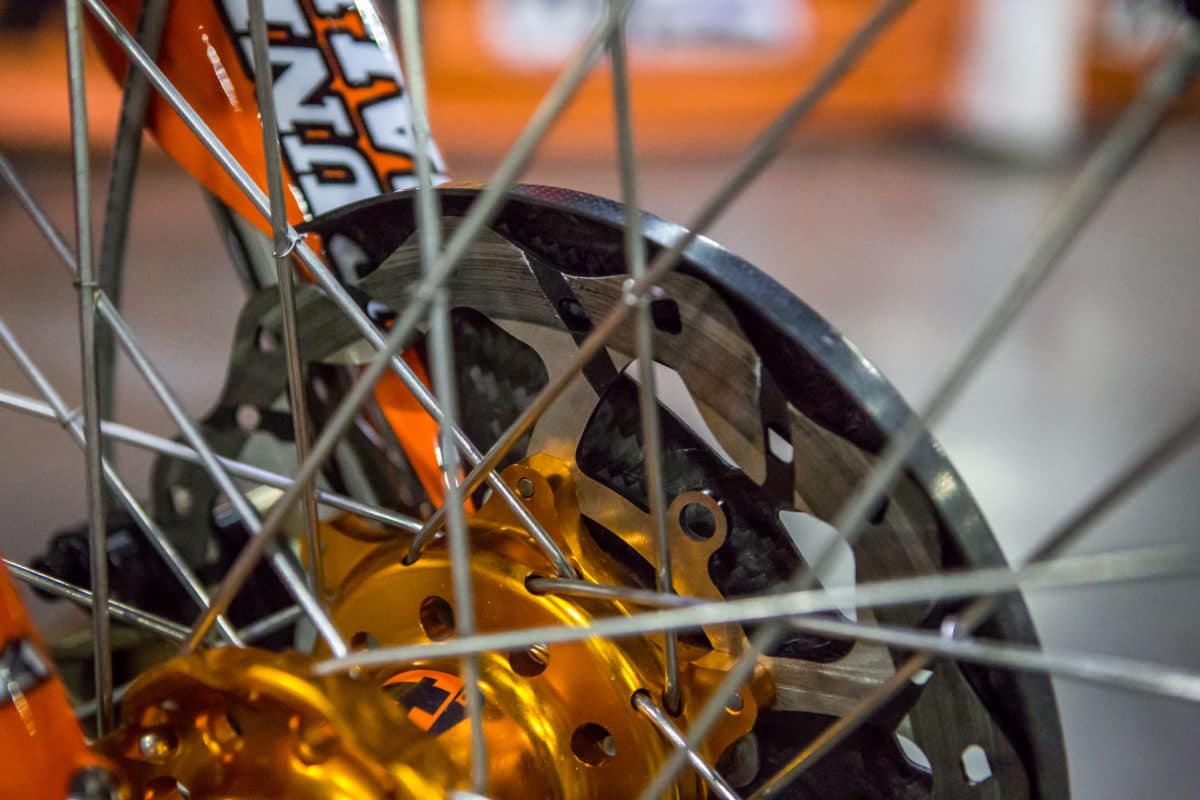 A carbon Acerbis disc guard is used to protect the oversized front rotor of the bike. This rotor is provided by Galfer and has a special design. It has a cut away in it for cleaning the pads and you are less likely to glaze the brake pads. The hubs are Talon, wrapped with Excel rims and Dunlop tires. 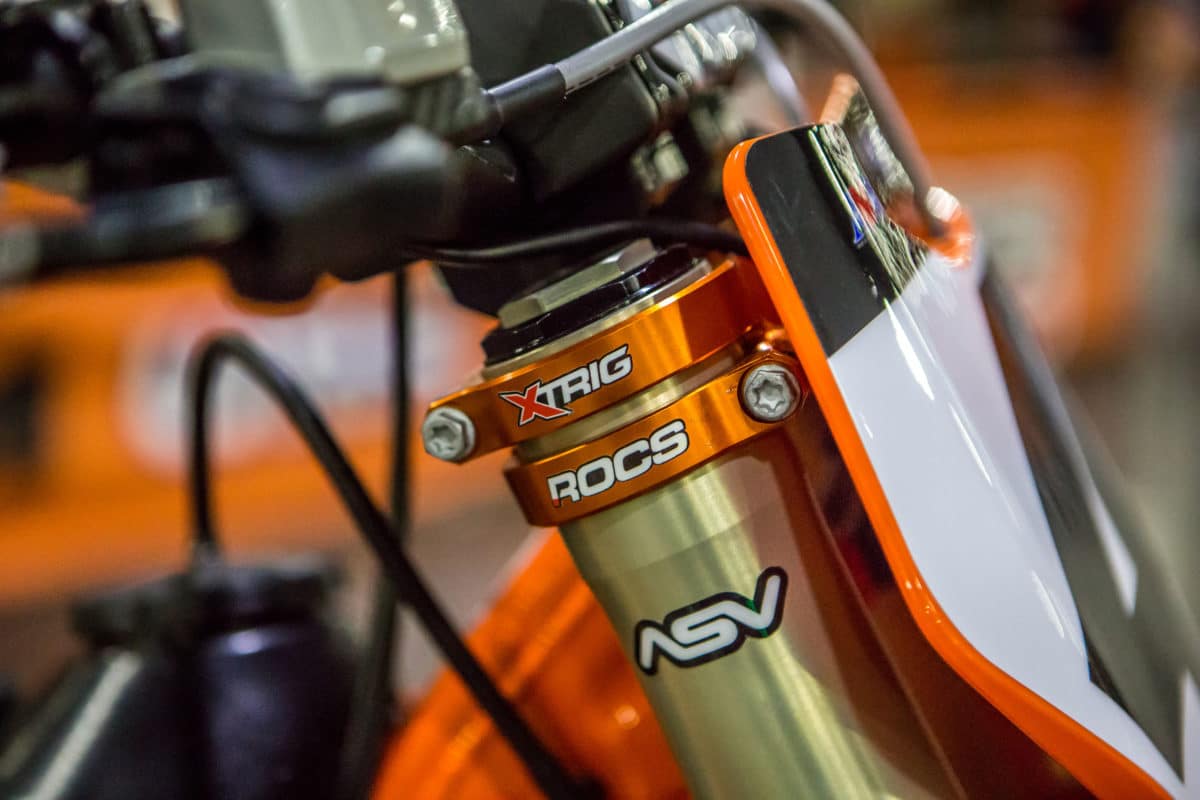 This exact time last year Blake made the switch on his own to X-Trig triple clamps. They work with Blake and he has a lot of freedom to try new things. After hours of testing, they’ve found something they like and have stuck with it since round two. The bar mounts are also made by X-Trig. They offer different elastomers, depending on how much absorption you want. Blake runs the medium style on his set up. He likes the flex combo between the ODI bars and X-Trig mounts. This combo allows some relief on his wrists which he injured in the past. 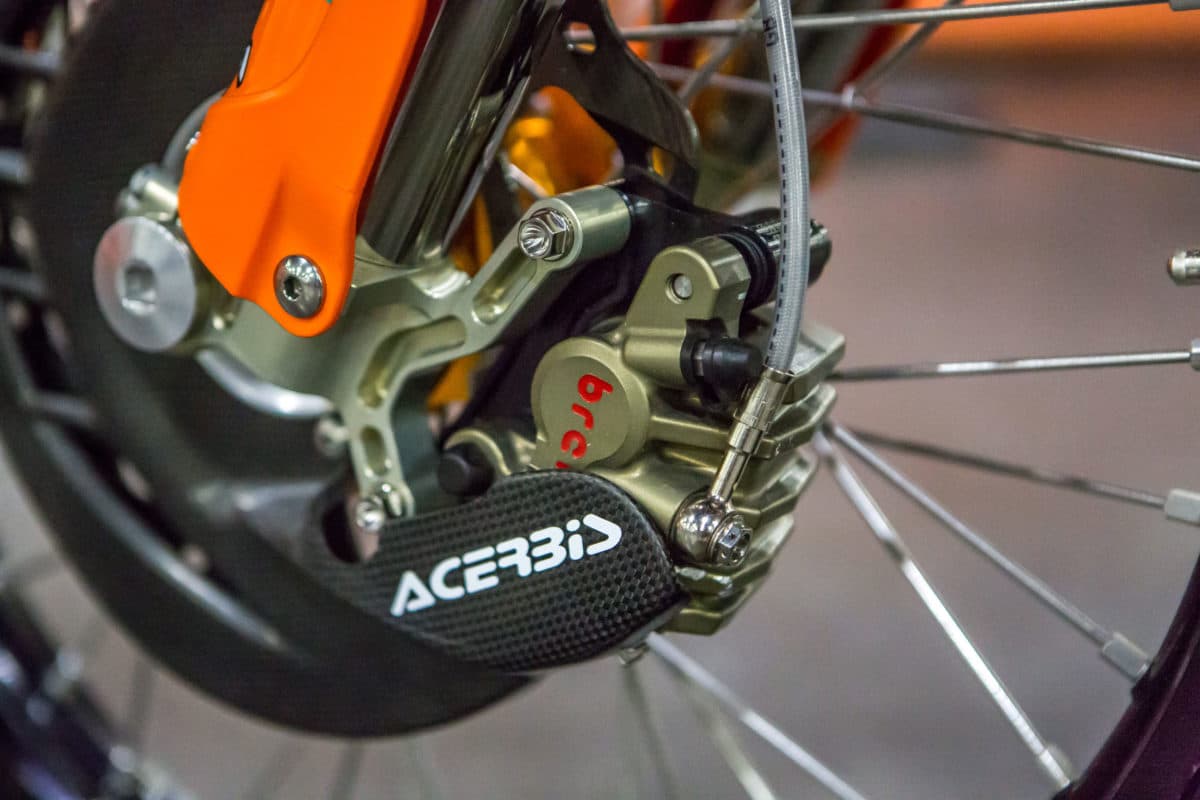 A factory caliper is mounted to the front of the bike, and again you can see the Acerbis protection. Nathan explained that the team has a choice of running quite a few components and component material. They are all at their finger tips but have come to a pretty firm decision on what they will be running for the remainder of the season. A lot of it plays into durability versus performance on what the final choice is. Aluminum versus Titanium for example. Note: Blake is actually not a huge fan of the titanium and it is used more for cosmetics across the motorcycle. 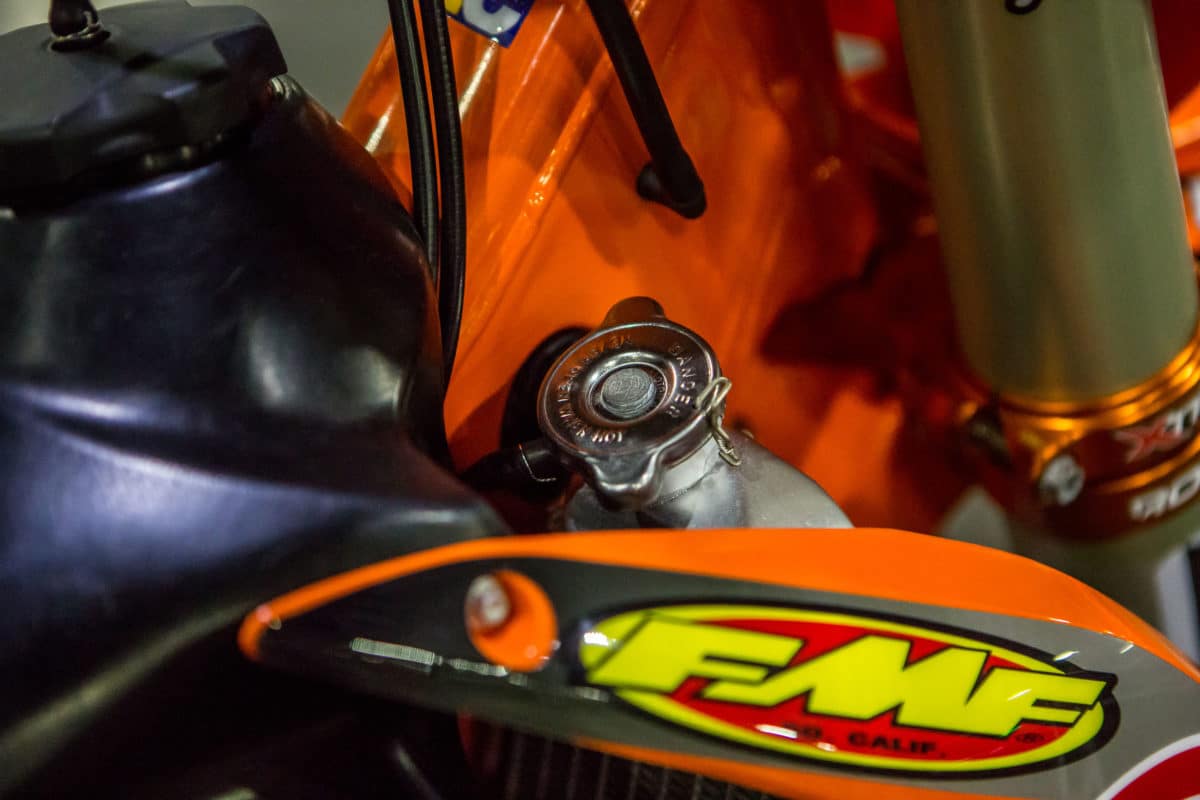 Beyond the obvious extra fastener, the radiators are exactly what comes on the 2018 KTM 450SXF Factory Edition 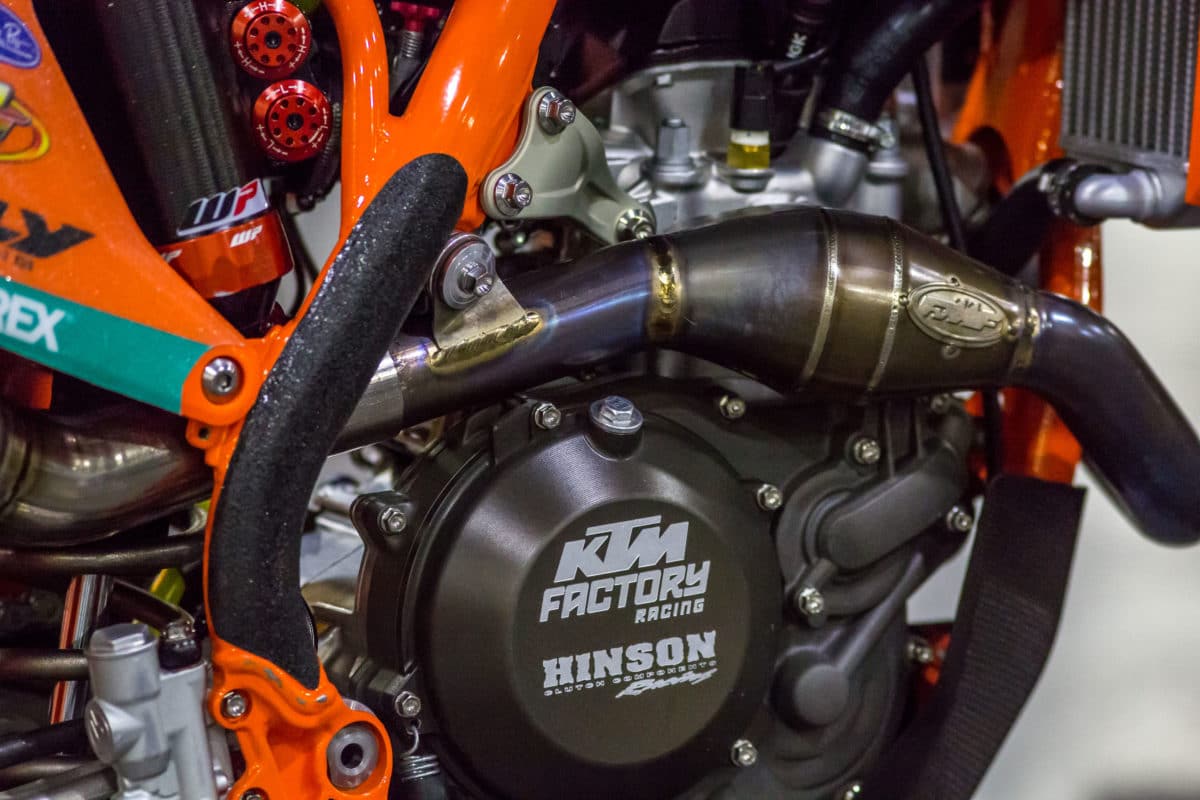 All of the engines are provided by KTM Factory Racing. Everyone is pretty much on the same set up. Blake has grown away from having a harder hit to something more rideable. Nathan did tell us that in outdoors it does change as Blake likes to ride his 450SXF more like a little bike. With FMF on board, the team has several header pipes available to them. Blake is on a less aggressive head pipe compared to the rest of his teammates. Although, in the end the overall package is very very similar. Data Acquisition comes in various forms for factory teams and on the Rocky Mountain team is actually very simple. There are no connection points for computers to hook up to around the engine. Nathan liked to put it into the words “you see is what you get,” and “we like to keep it simple.”  Hinson provided the clutches to the team. Some adjustments are available to Blake, but the entire team is on a very similar set up. 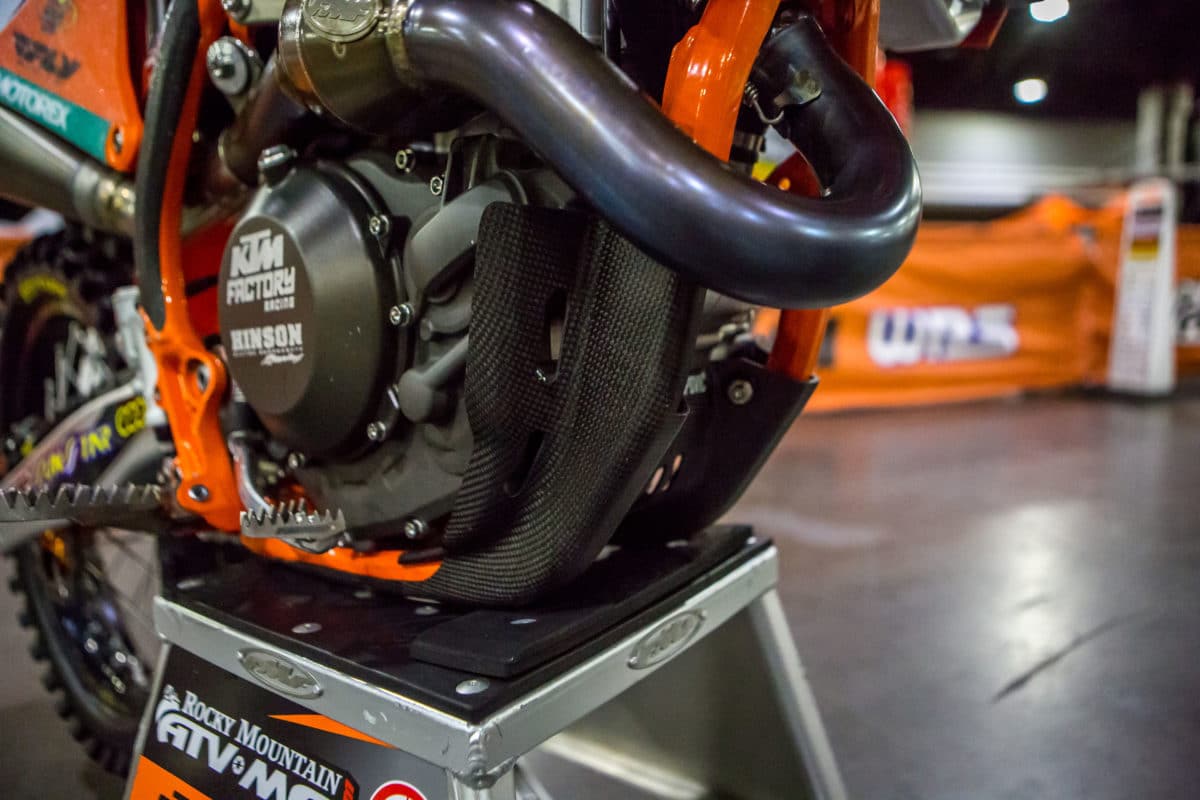 A factory-supplied skid plate is added to the bottom of the motorcycle for added protection. Tabs are welded to the frame to mount it on. 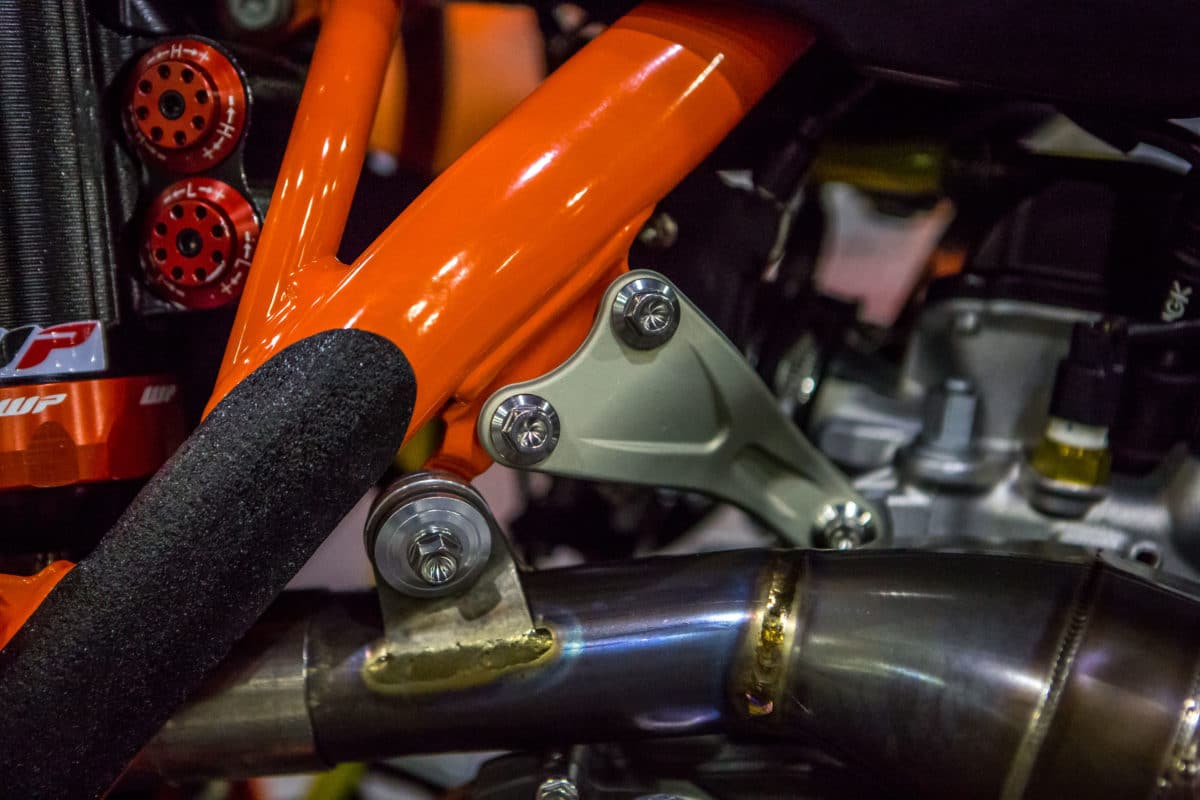 While many of the factory teams are running factory engine hangars, the Rocky Mountain team is currently running an OEM piece, but parts will change as time goes on. Nathan did say that the team will continue to try new components and work on the development of this bike further down the line. 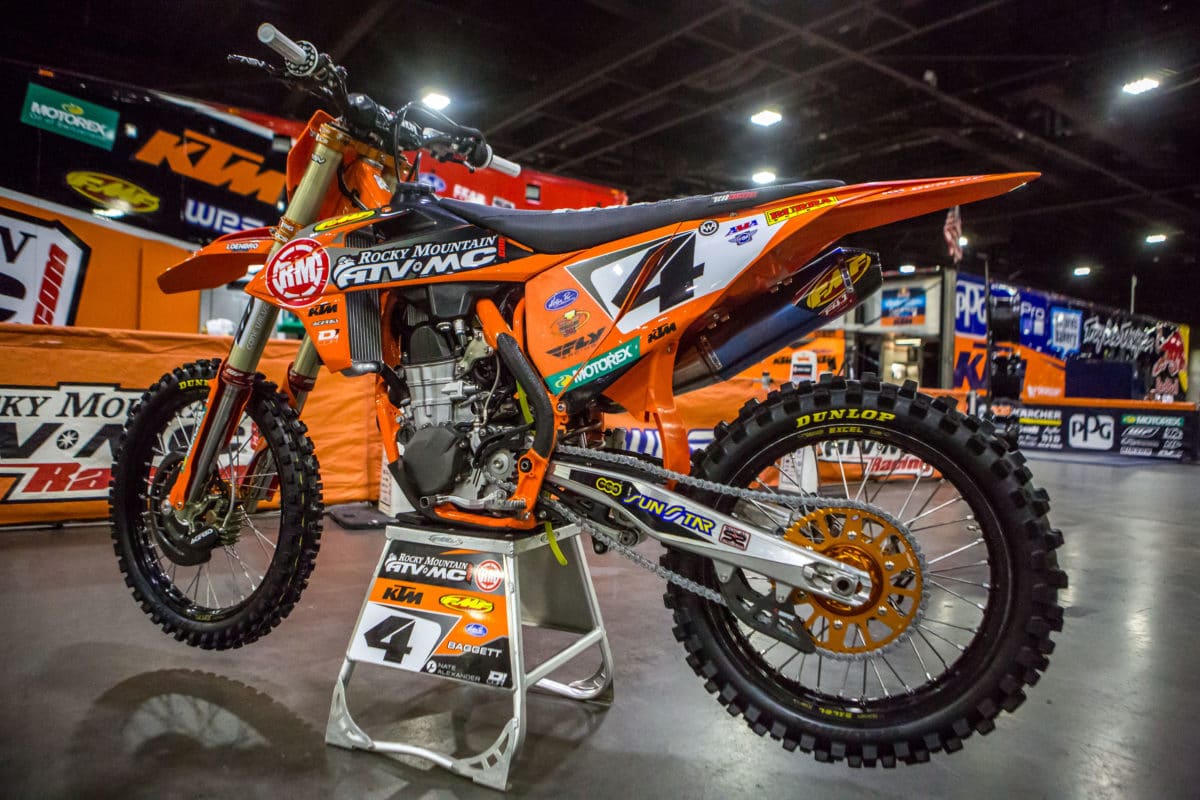 Blake is slowly coming off the grip tape placement. The frame, airbox, and partially on the number place are where it currently sits. The frame pieces are beneficial to Blake, but serve as more of a cosmetic protection piece than anything. The grip tape is actually not part of the sponsorship package for the team. It is pre-ordered and cut by the mechanics. 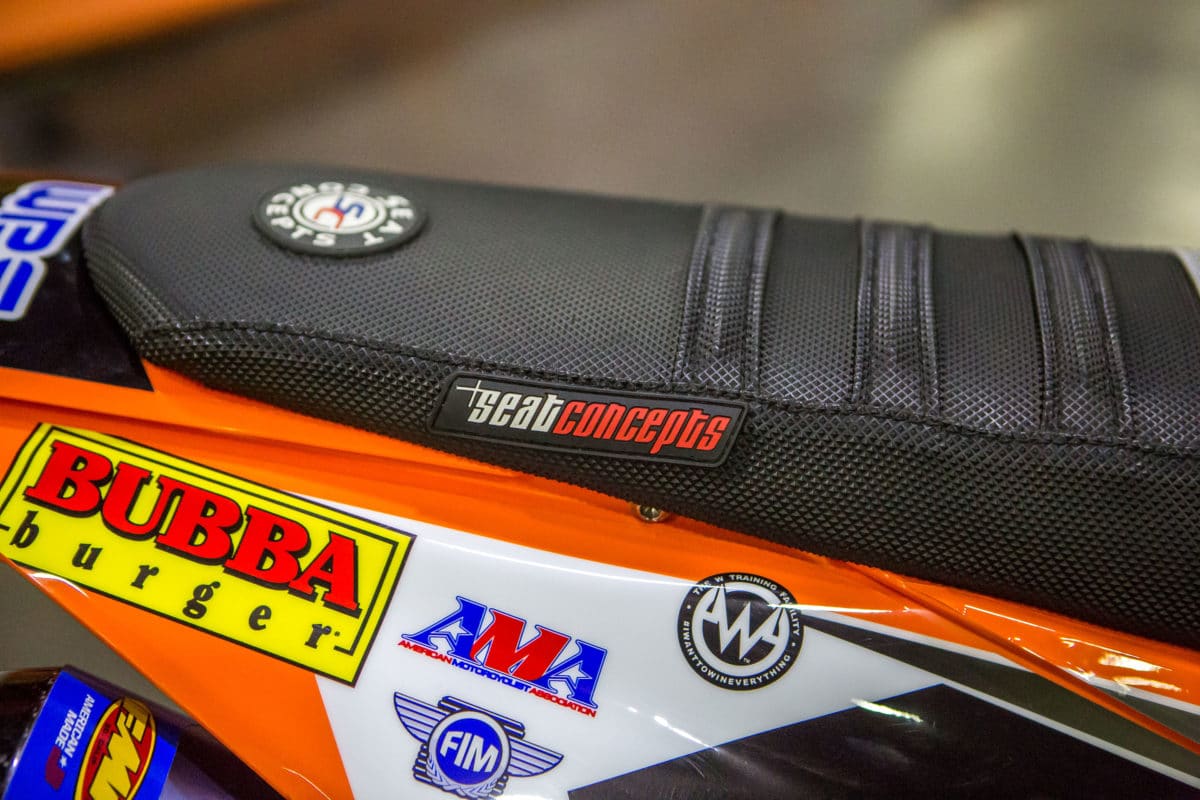 A Seat Concepts seat is added to the bike. Blake likes the diamond style grip instead of the waffle. A pretty trick component to the seat and neat trick the team does is the added fuel lines that lie beneath each pleat for added traction. Blake prefers a much more aggressive seat cover than his teammates. 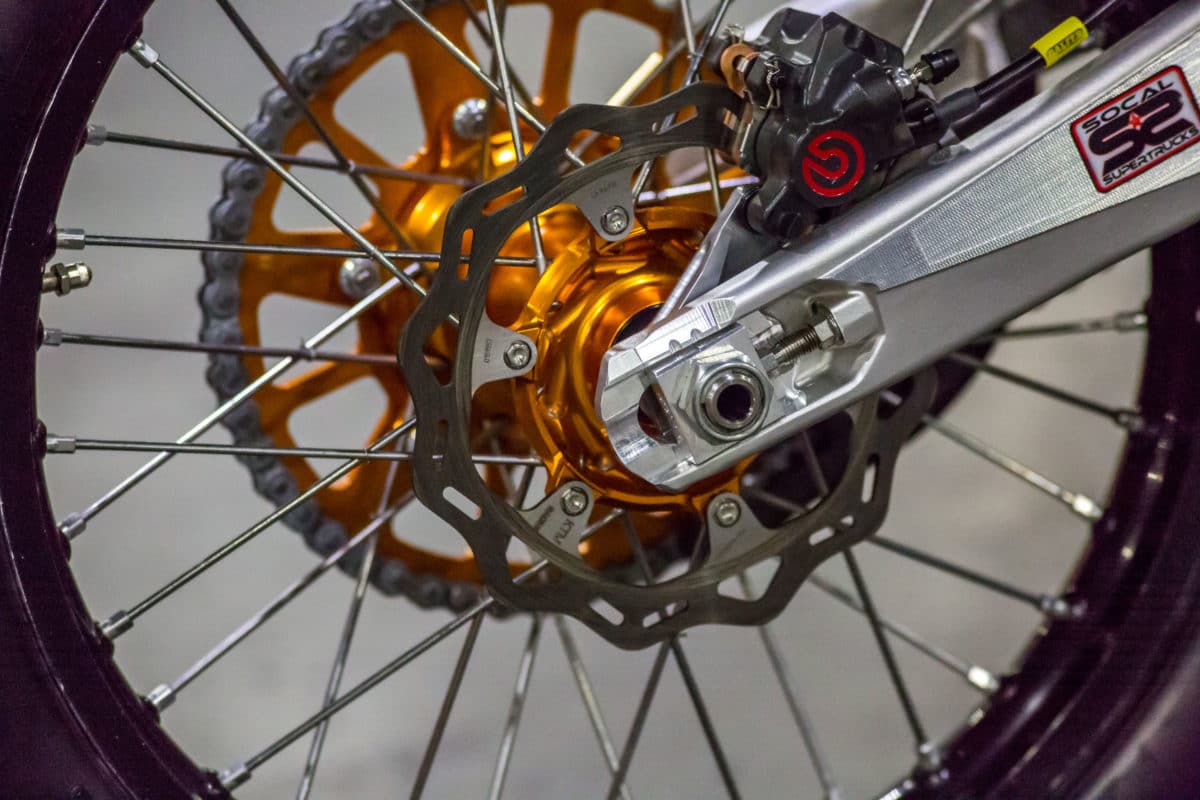 Out back you will find a titanium axel and titanium sprocket bolts. These are specifically placed on the bike for durability. 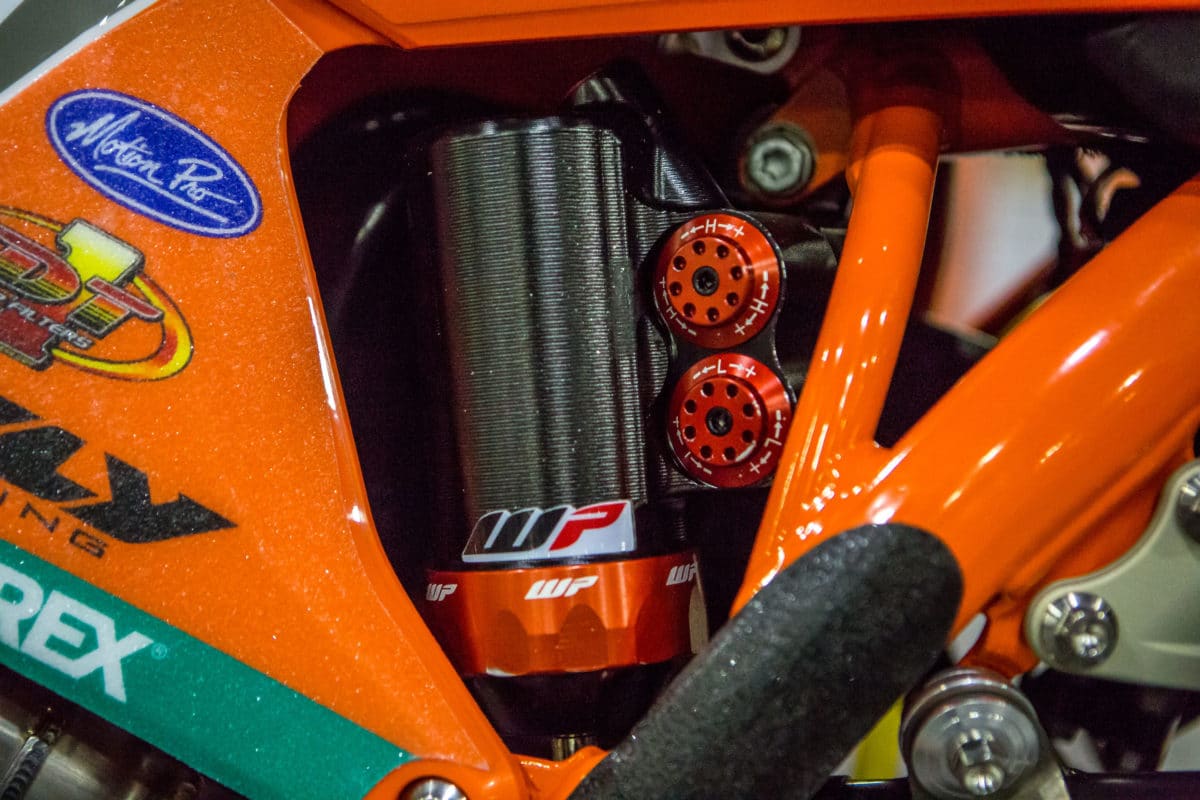 The rear shock is new for this year. New look with a little bit of added weight but not to worry, Nathan explained they have spent a lot of time testing this new component and are very pleased with the results. 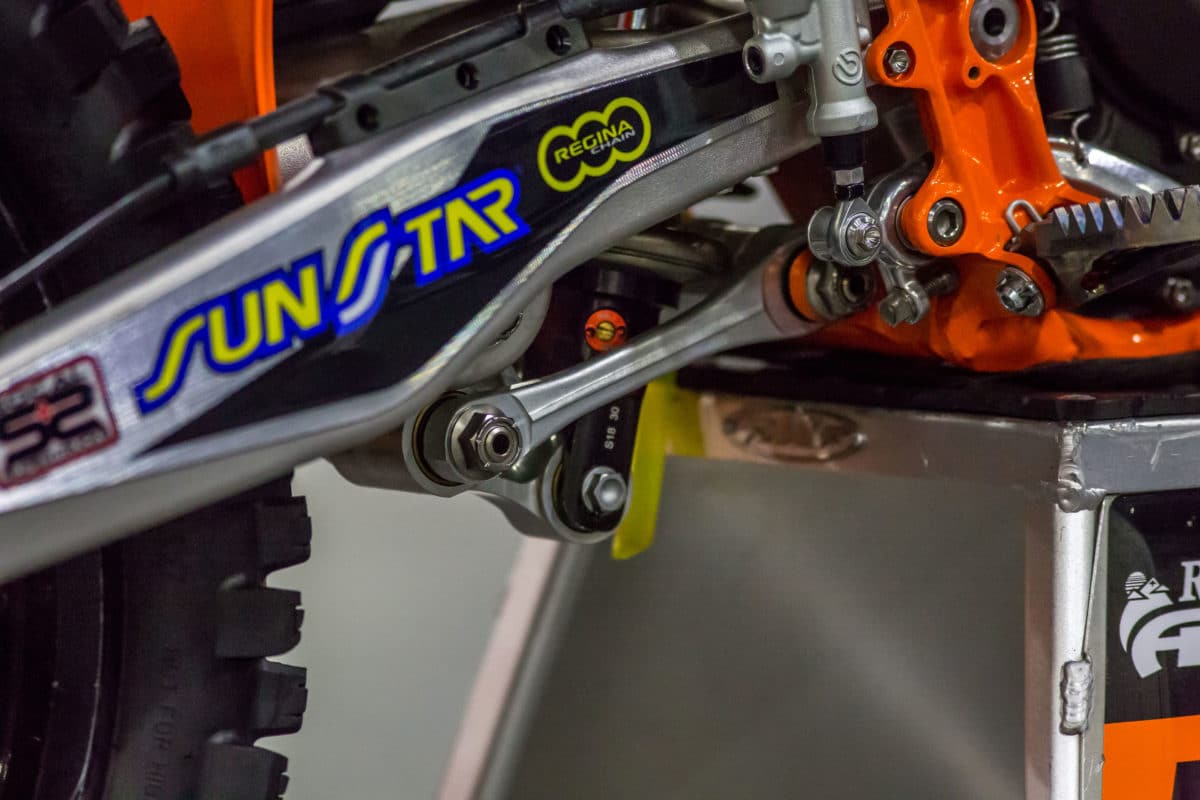 Blake has tried a lot of different combos when it comes to linkage. He is currently on OEM. They have plenty of options but have come back to the tried and true stock form. They’ve built their set-up around it including ride height etc. 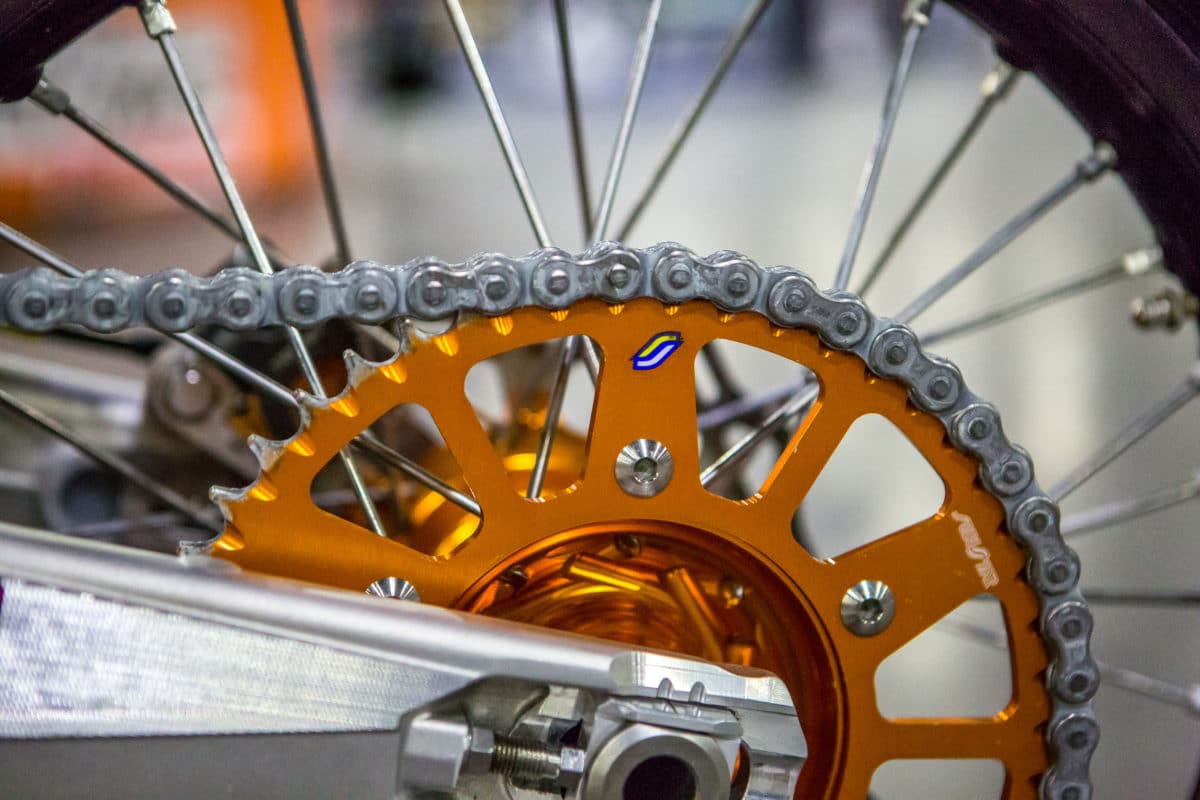 A new piece to the pie this year is Sunstar sprockets. Nathan explained that the quality of the new sprockets has exceeded his expectations and they are very pleased to have it. Again, you get a better look at the titanium sprocket bolts. A Regina chain is added to drive system. The chains are made in house all by hand. Wheel position is pretty key for Blake. He likes to run the wheel pretty center and that is also why they are running that particular gearing combo. 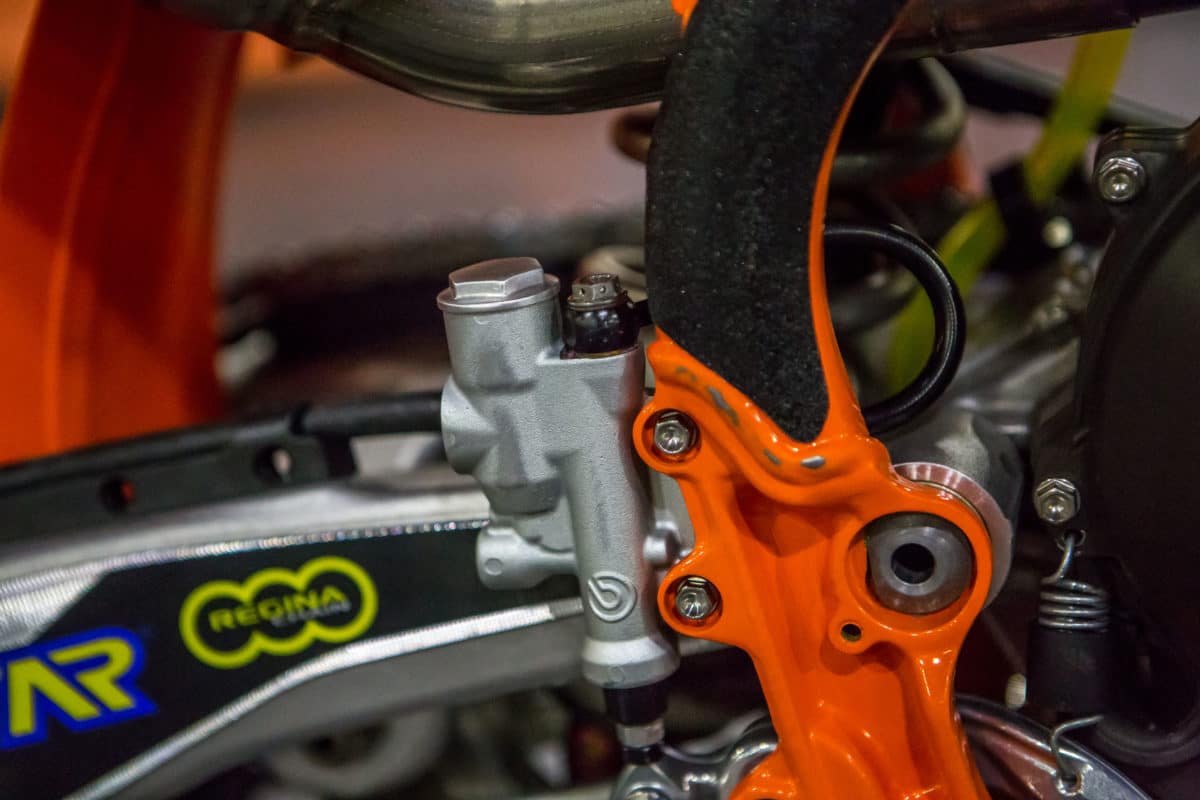 A familiar part on the factory bikes is the rear master cylinder with no sight glass. It is a factory part and this design keeps from any issues of debris hitting the glass and fluid leaking out during a race. 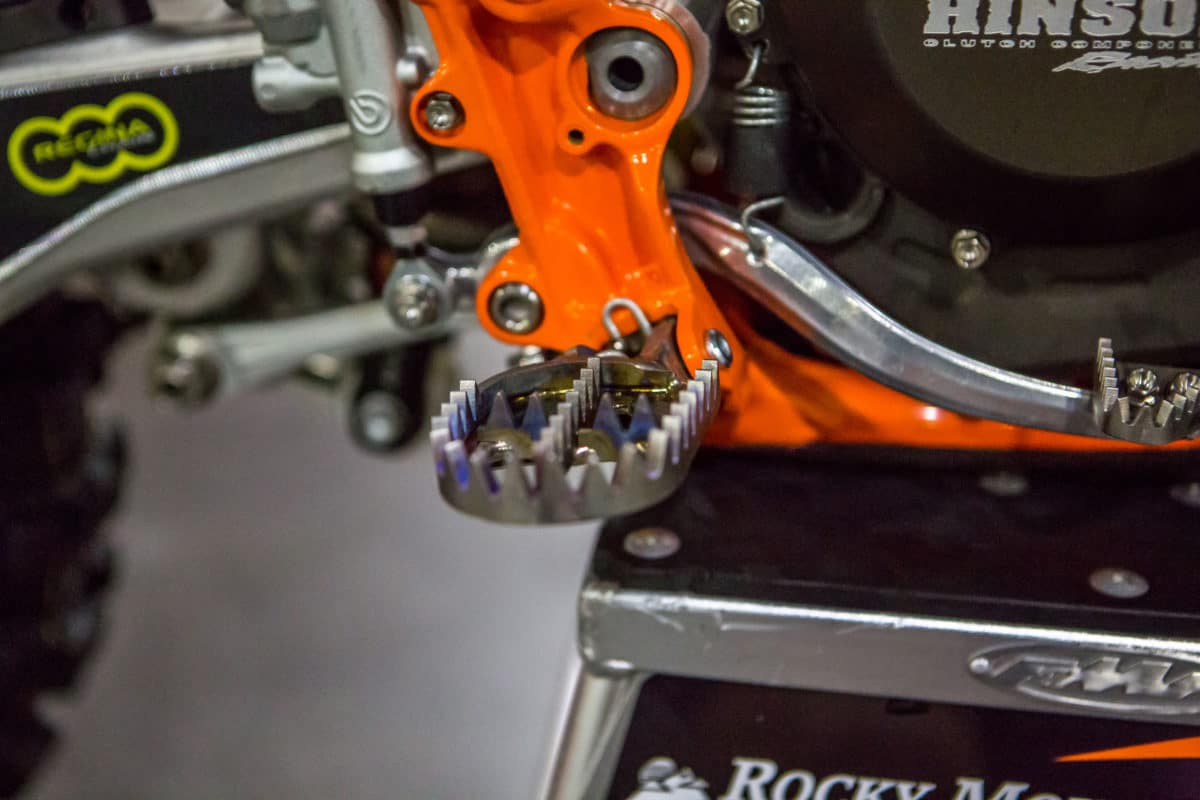 The team has made the switch to a new footpeg company called Pro Peg. Blake likes them because they have a wider platform and are very consistent in durability. In this photo you can also see the titanium brake pedal tip. 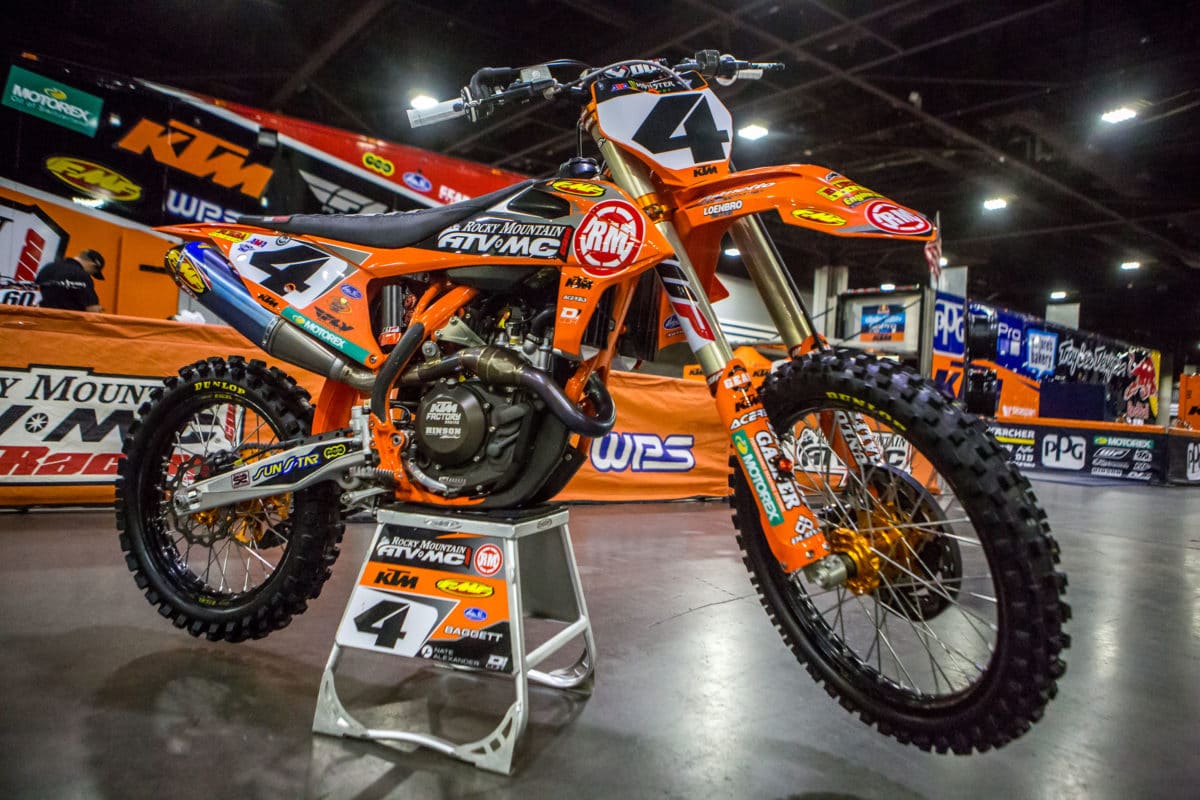 Something you can’t see but you know is there is the DT1 air filters. DT1 provides 3 different style filters for the team depending on race conditions. There is a Supercross filter, motocross filter (helps with sand), and a mud filter . 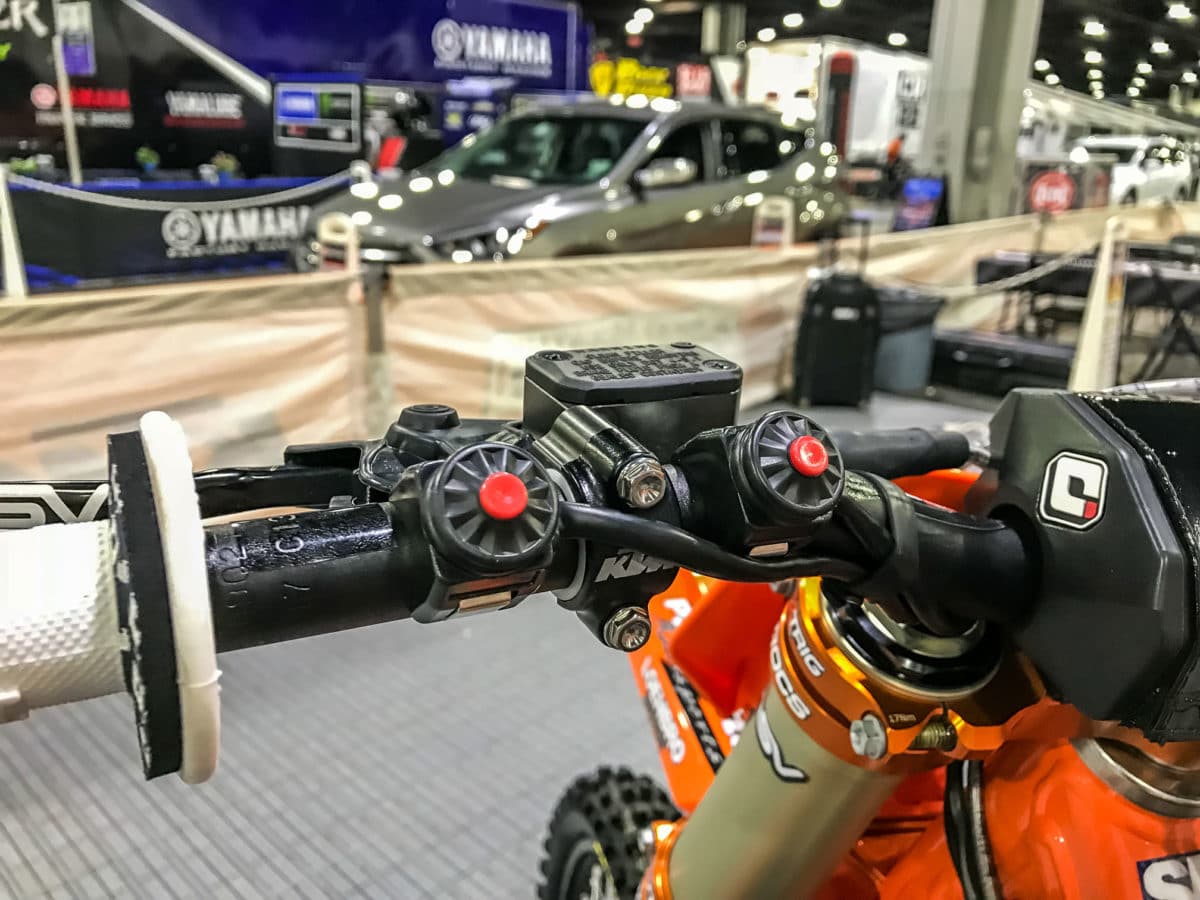 This jumped out at us when looking at Blake’s bike. He has 3 different buttons on the handlebars. To the left is the kill switch and the one to the right of that is the start map specifically designed to help Blake off the gate. There are LED lights that let the rider know the map has been activated. On the right side of the bar is the start button. 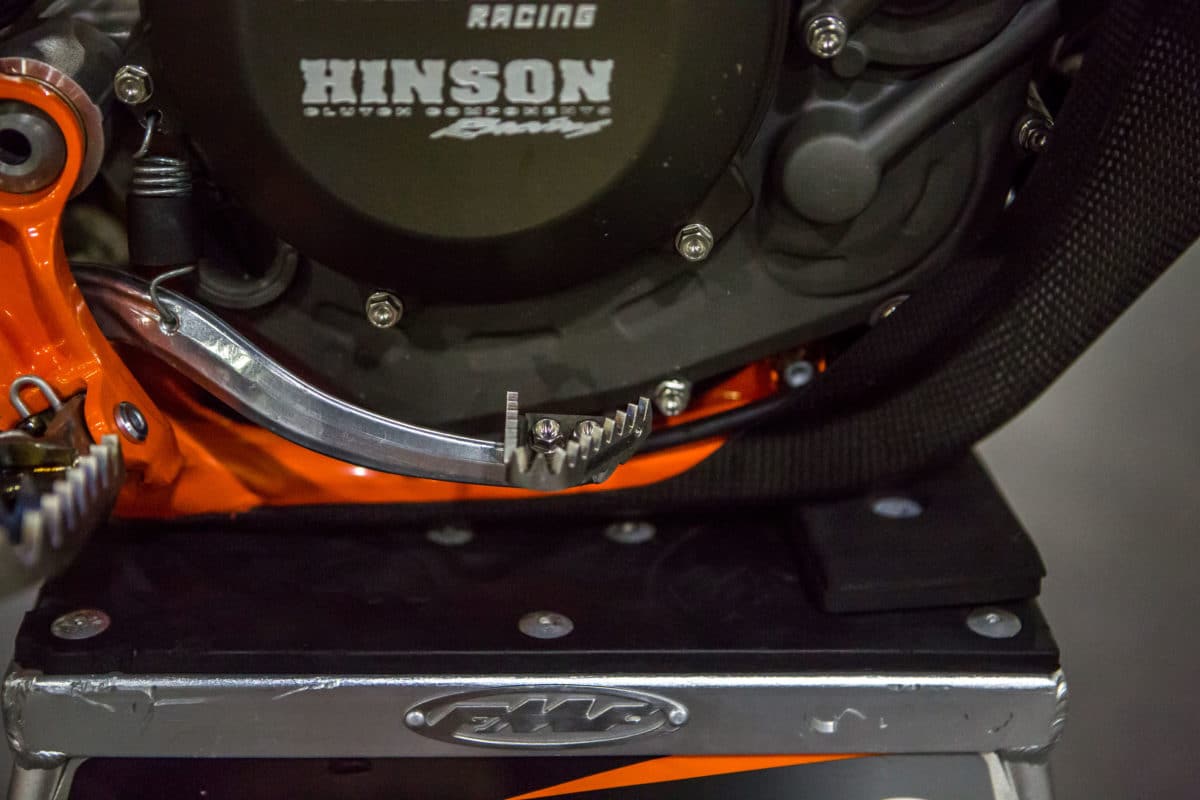 Both the shifter and brake pedal are a notch lower than stock. Nathan did say it is something you have to keep an eye on as track conditions change and the ruts become deeper which could possibly snag these pedals. 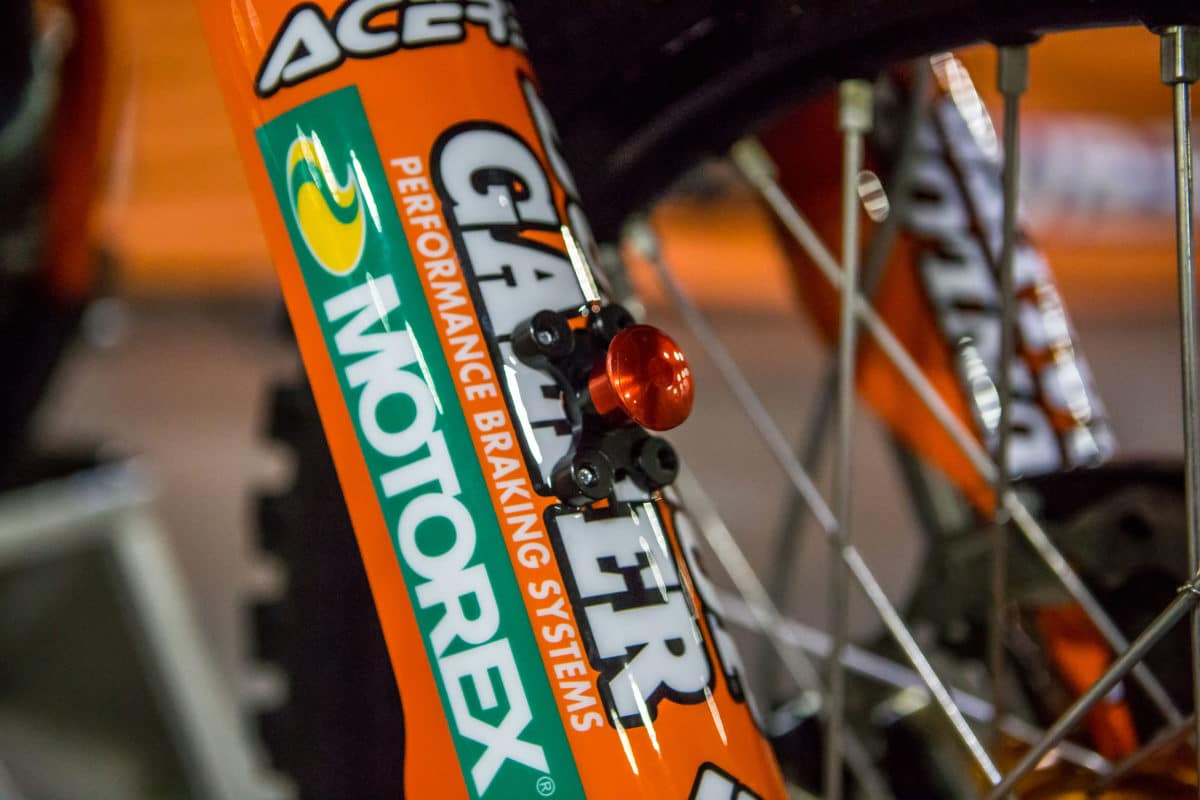 Holeshot device buttons have changed position quite a bit since their inception. Because of the new metal grate start, riders have a wide array of positions to approach the new format. Blake runs his much lower than most riders. 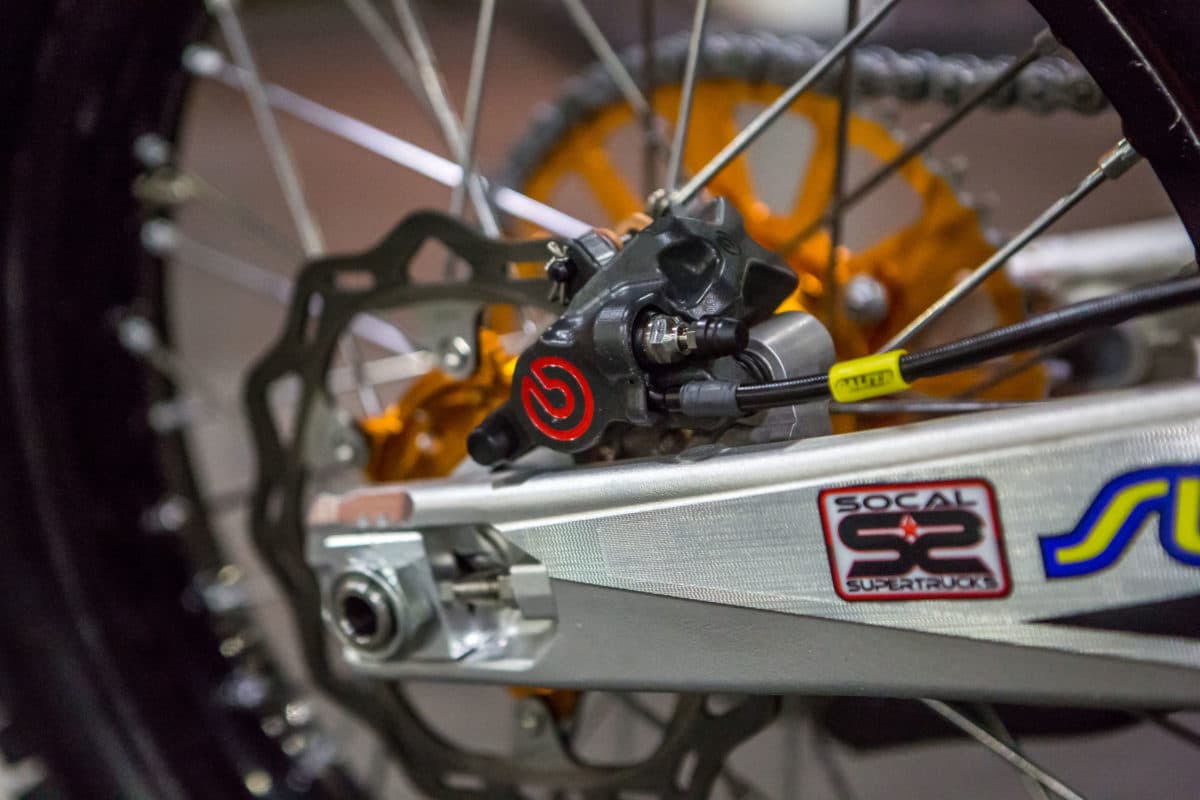 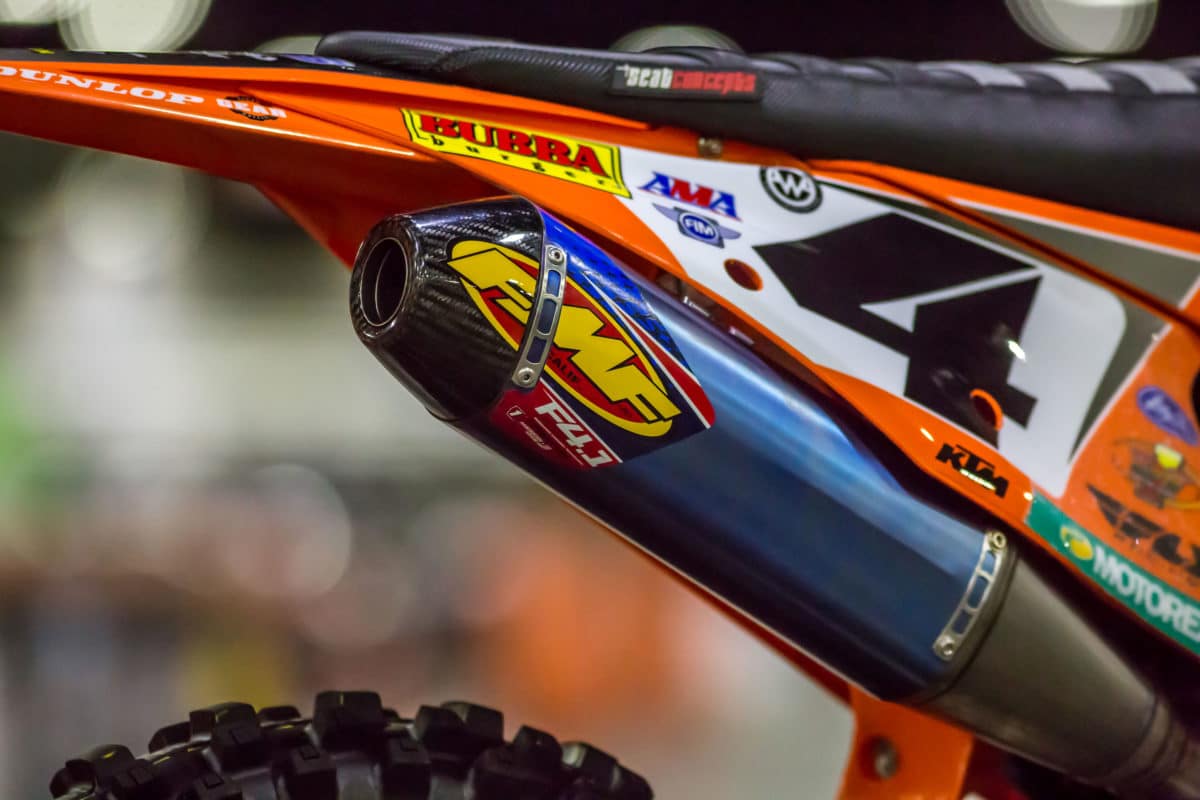 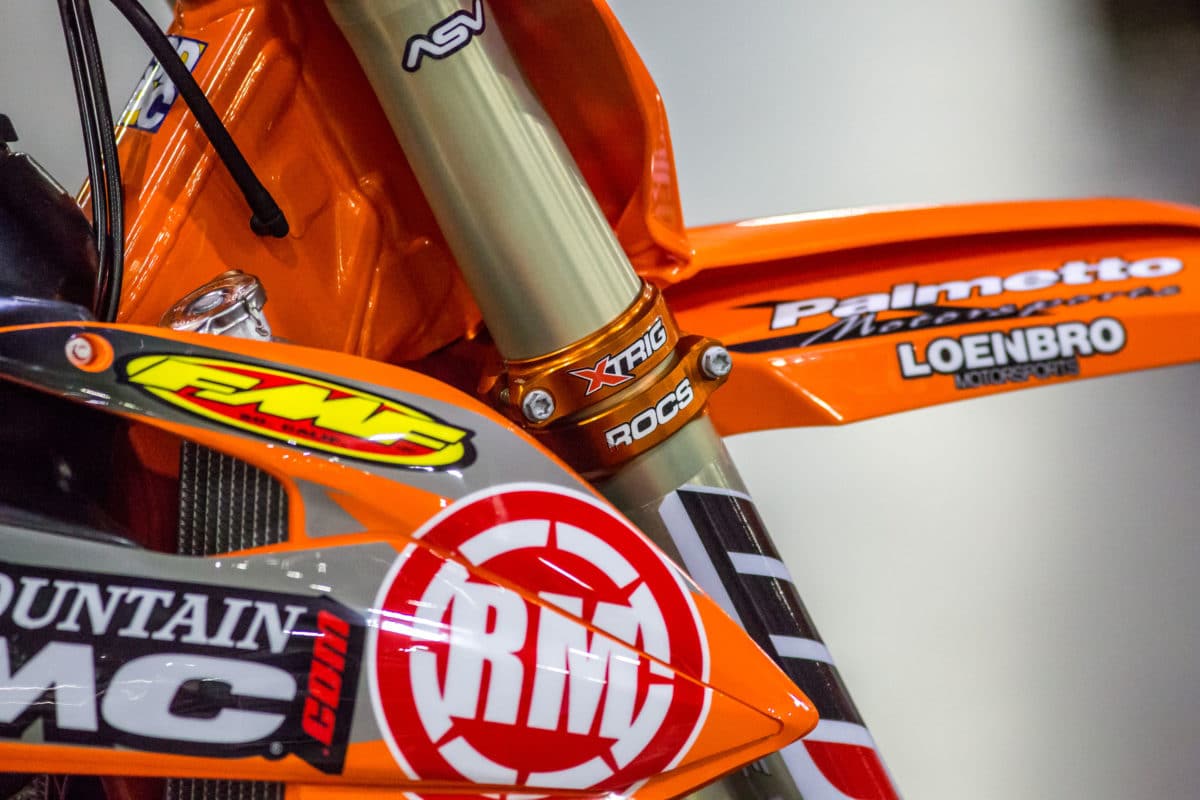 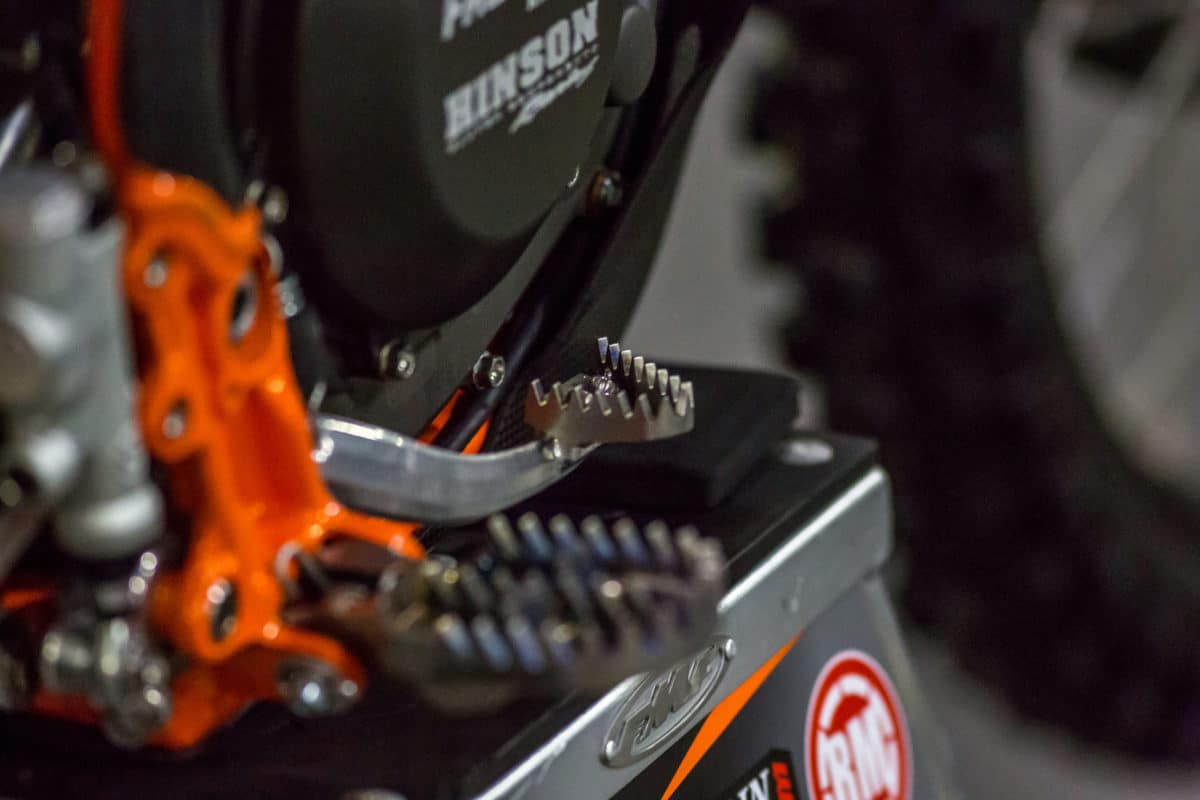 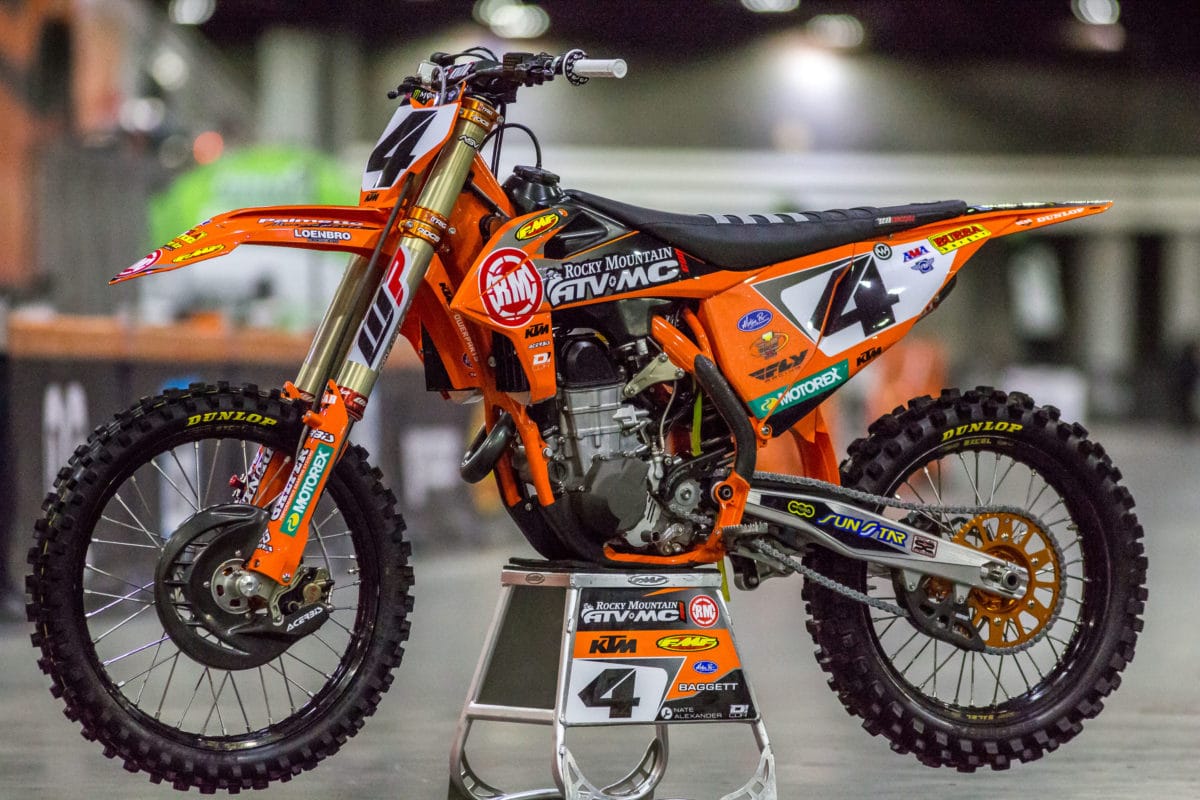