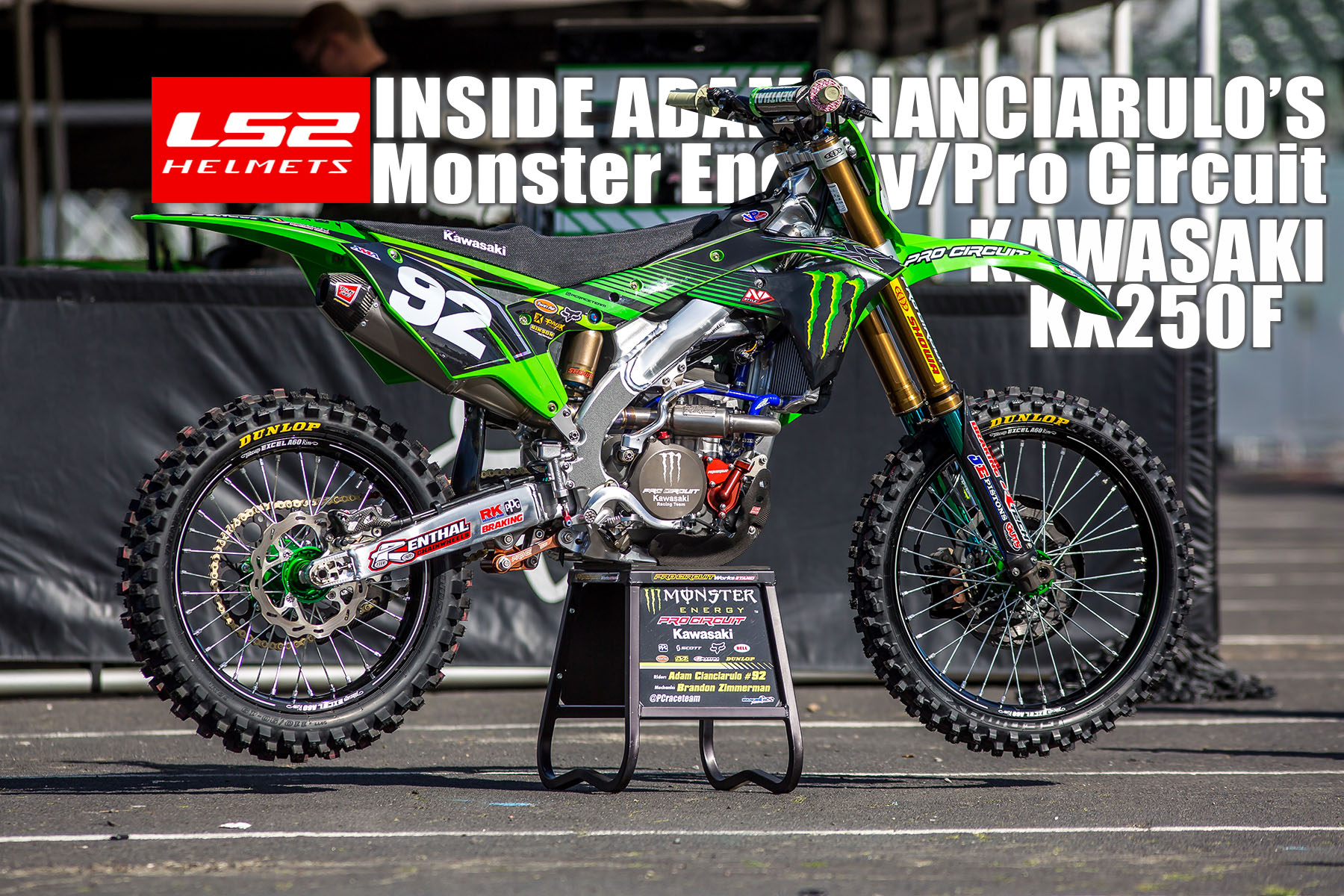 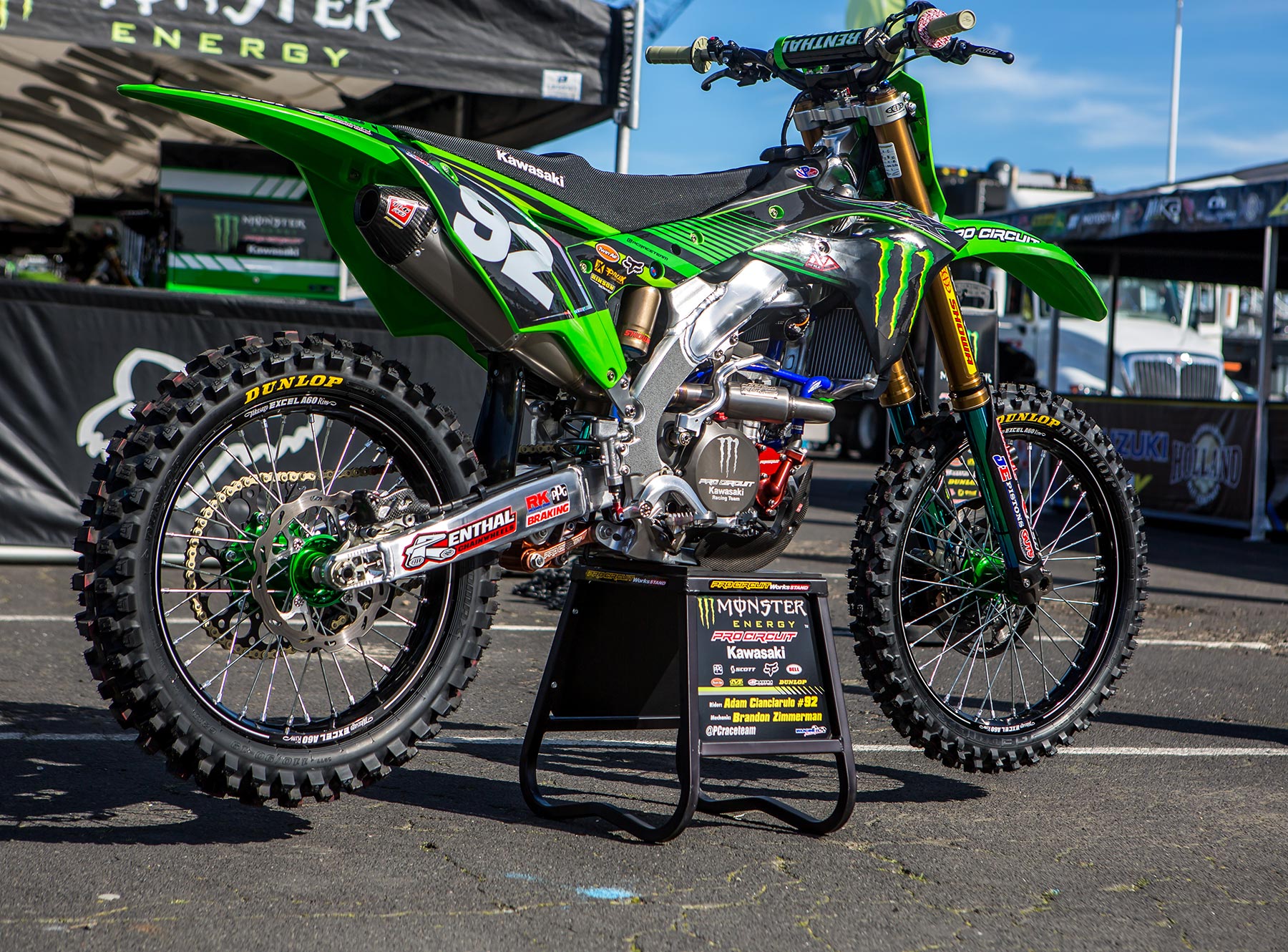 Pro Circuit has always been known for their race-inspired products and for spending countless hours at the test track to further develop their bikes. The final product that shows up to the races is an engineered work of art and worth gazing over. We caught up with Brandon Zimmerman (@zimm763) in the pits of Oakland to get all the details on Adam Cianciarulo’s Factory Kawasaki KX250F. 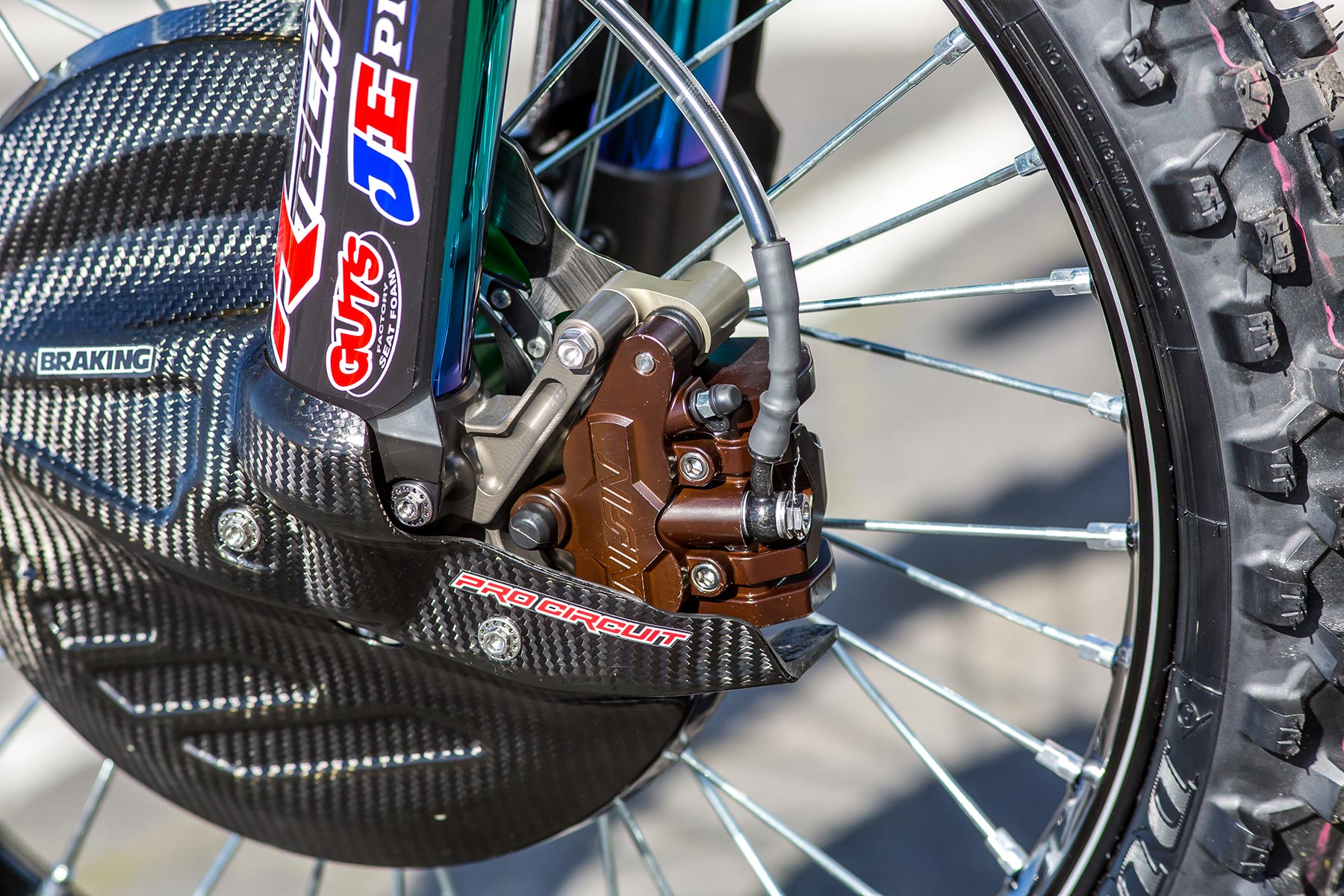 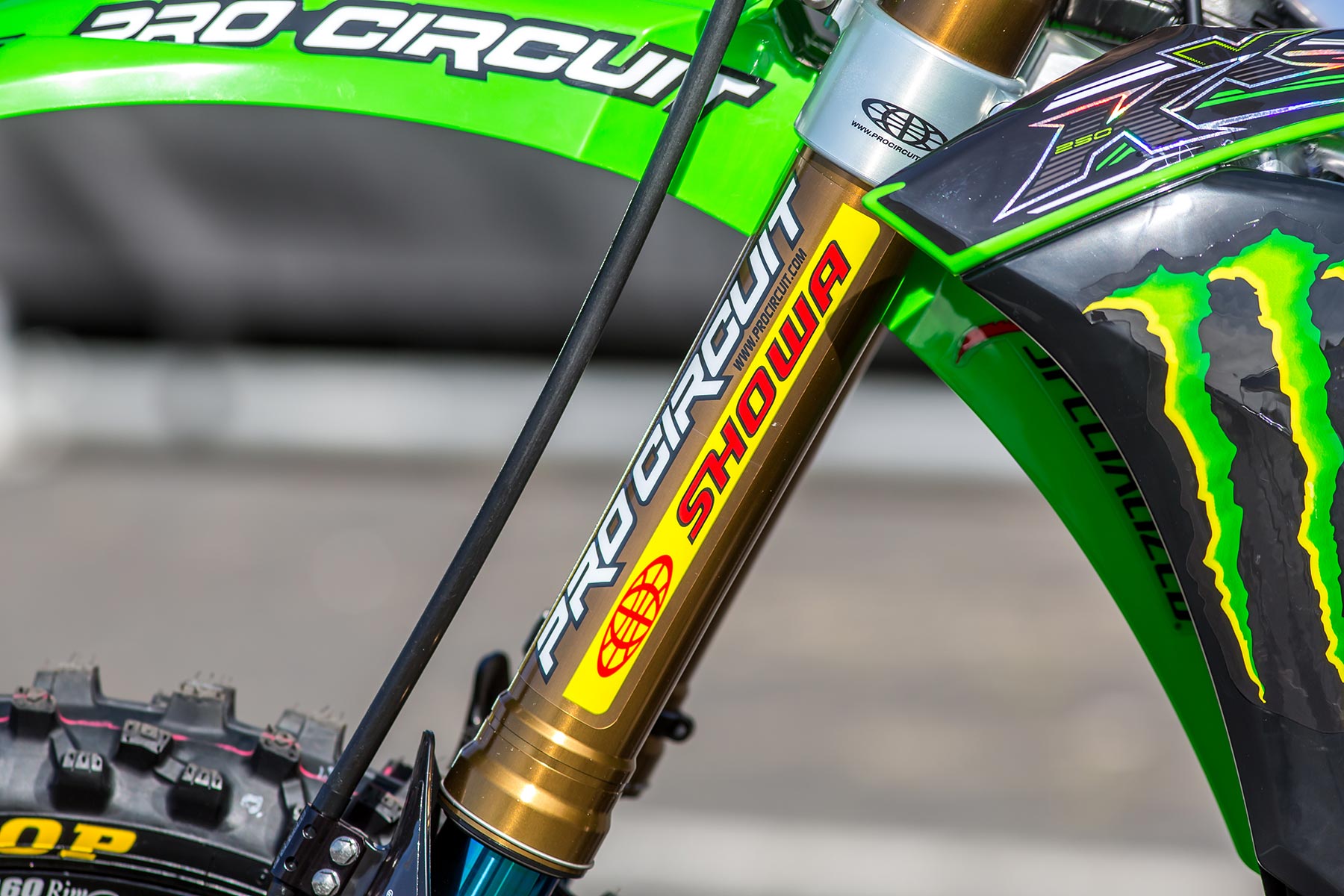 Pro Circuit A-kit Showa suspension is added to the motorcycle. Brandon explained that at one point Adam was the smallest and lightest rider on the team prior to his growth spurt. Now that he has grown up, Adam is the tallest and heaviest rider on the team which means very very stiff suspension. After the first couple west rounds they have gone even stiffer in the front and rear of the motorcycle. 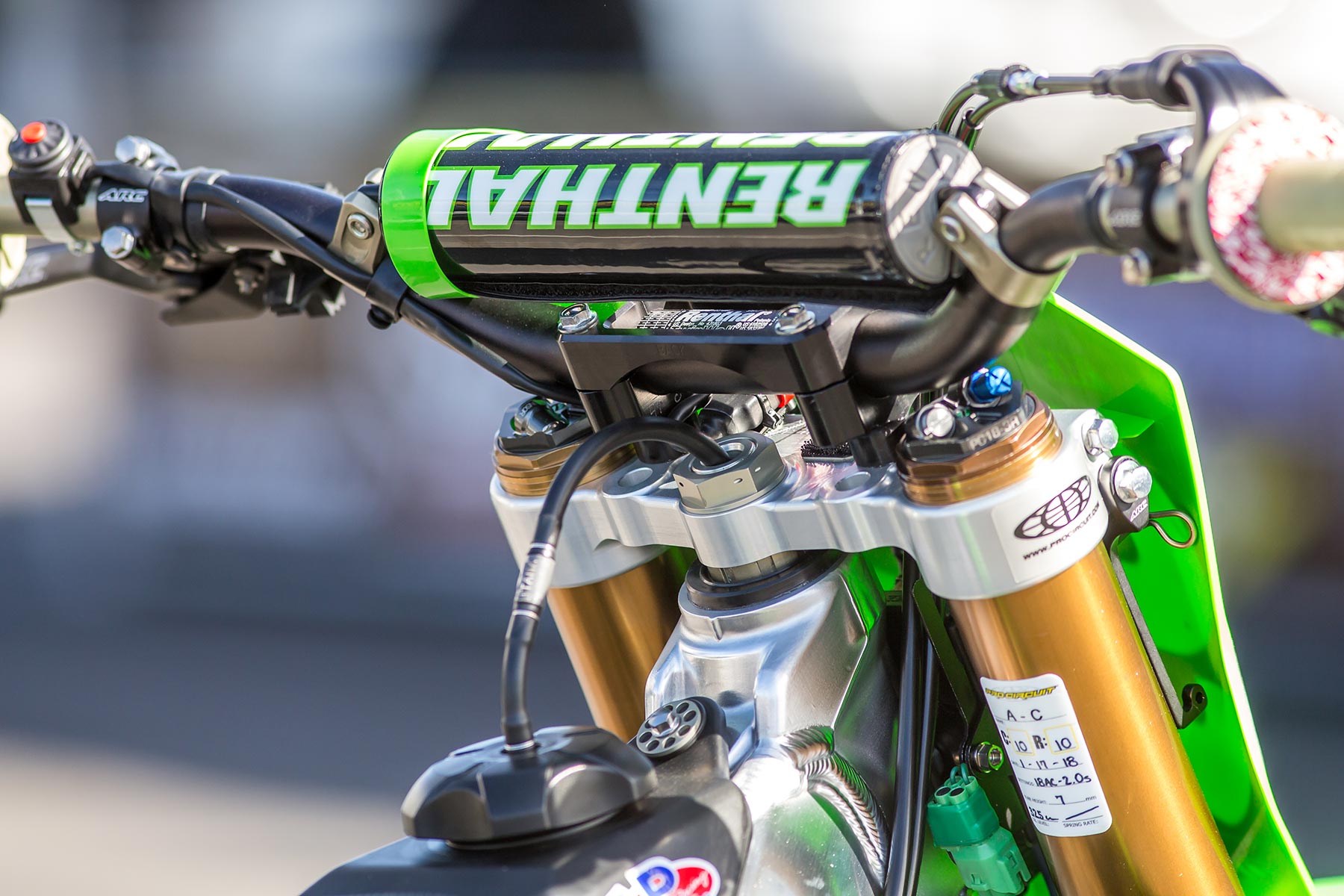 In controls, Adam holds onto the Renthal 997 handlebars, Renthal grips, and ARC levers. Brandon noted that this hasn’t been the only set up that Adam has run. They have actually run a much lower and much higher set up than this photo shown here. Another item you will notice is the in-house creation by Pro Circuit, the triple clamps. Note that Adam’s handlebars are in the more forward position on the clamps to give him a little bit more room in the cockpit. The actual steering stem lock nut is titanium and Pro Circuit has an array of choices to pick from including aluminum if they want it. 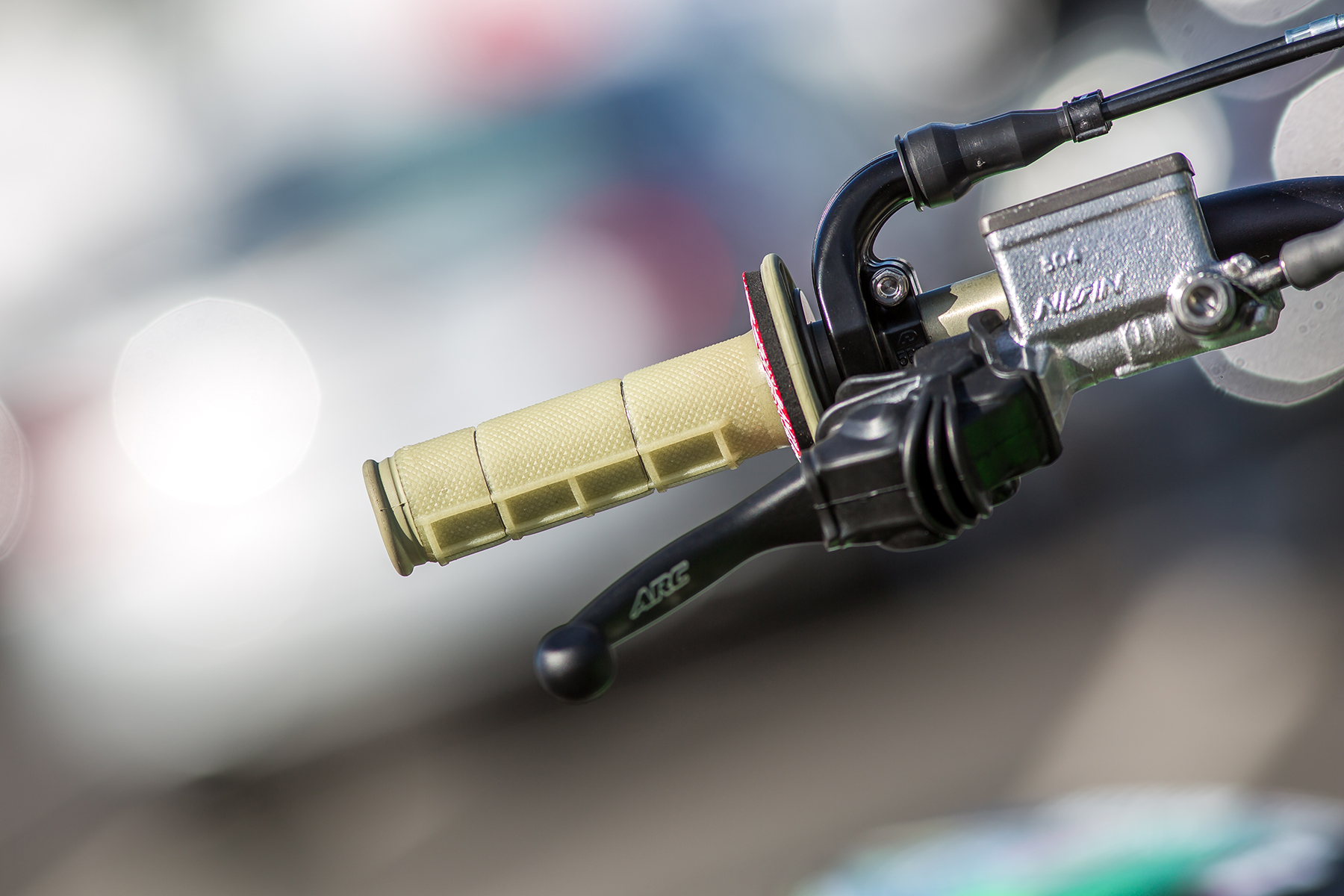 For supercross there is little to none as far as play in the throttle. Outdoors will change and they may give it a more relaxed feel in the event of hitting holes or rocks. Adam also prefers no play in the clutch side as well. 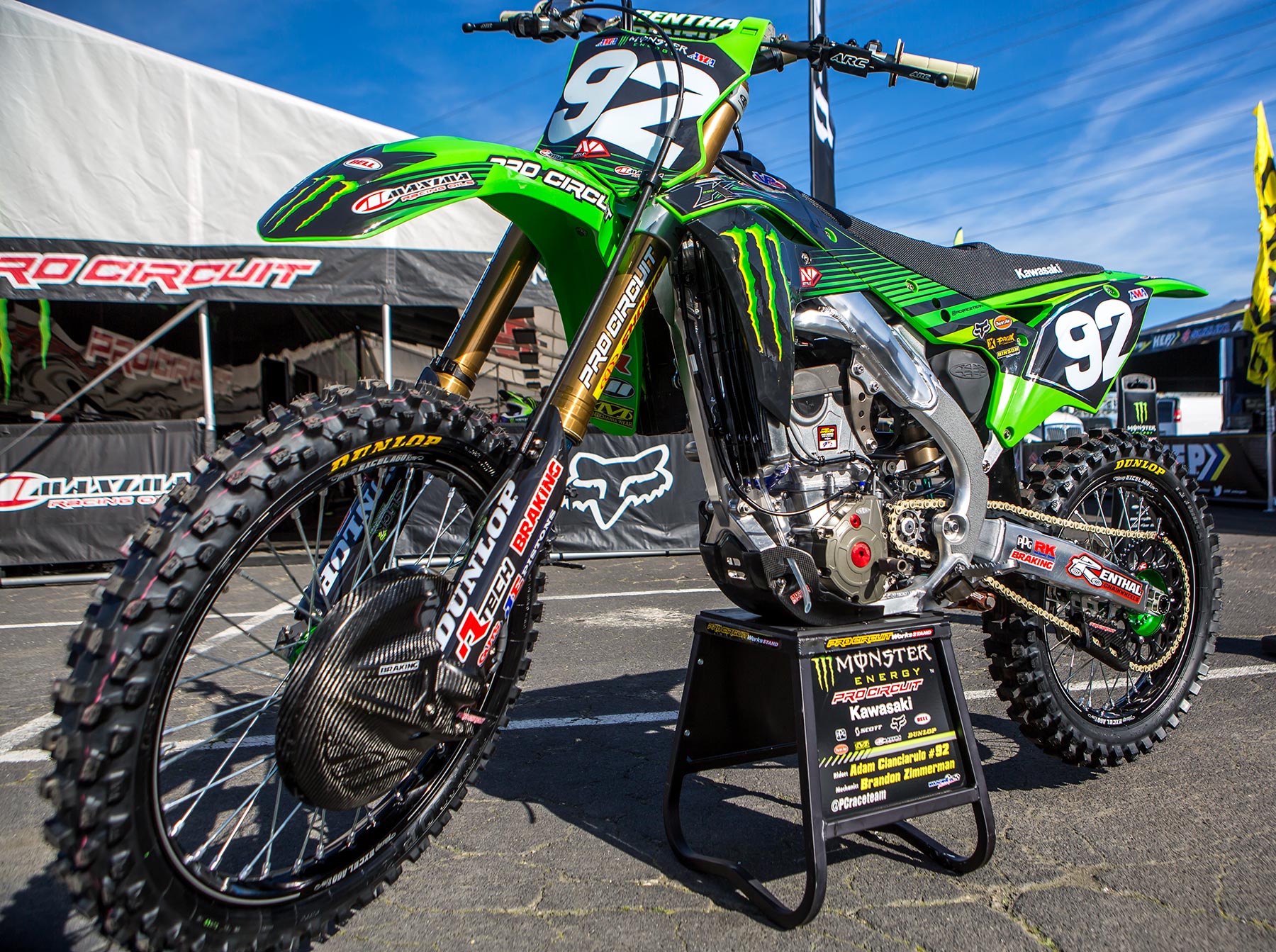 Aftermarket radiators are added to AC’s bike. They are wide and long in design and the right side can integrate an oil cooler. 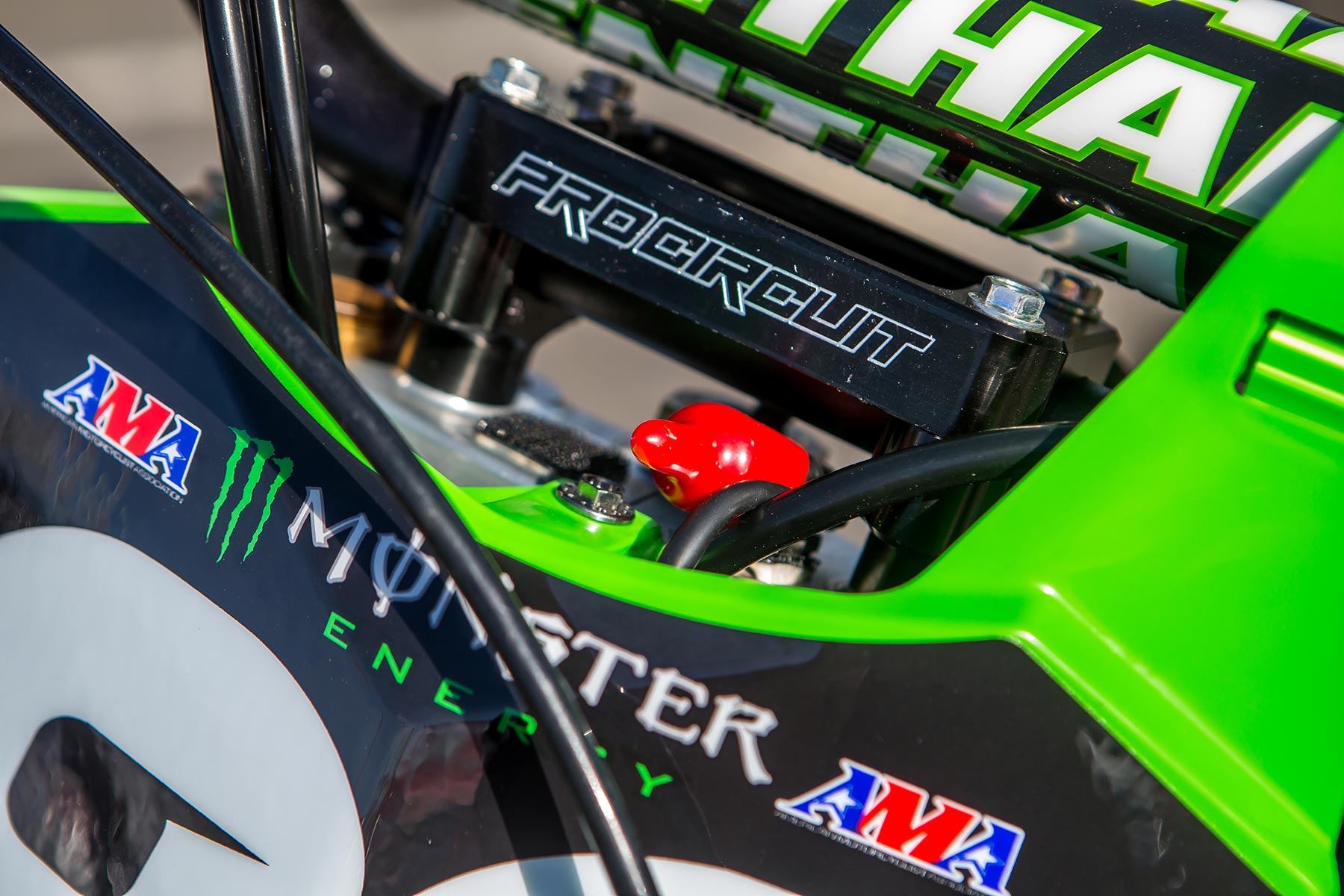 One part that caught our eye while over looking Adam’s bike was this red rubber sticking out from the handlebars. Brandon explained that this is a data port and contains an SD card. This allows the team to collect data on the motorcycle after it has been running. Every factory team has their own unique way of collecting data on the motorcycle. 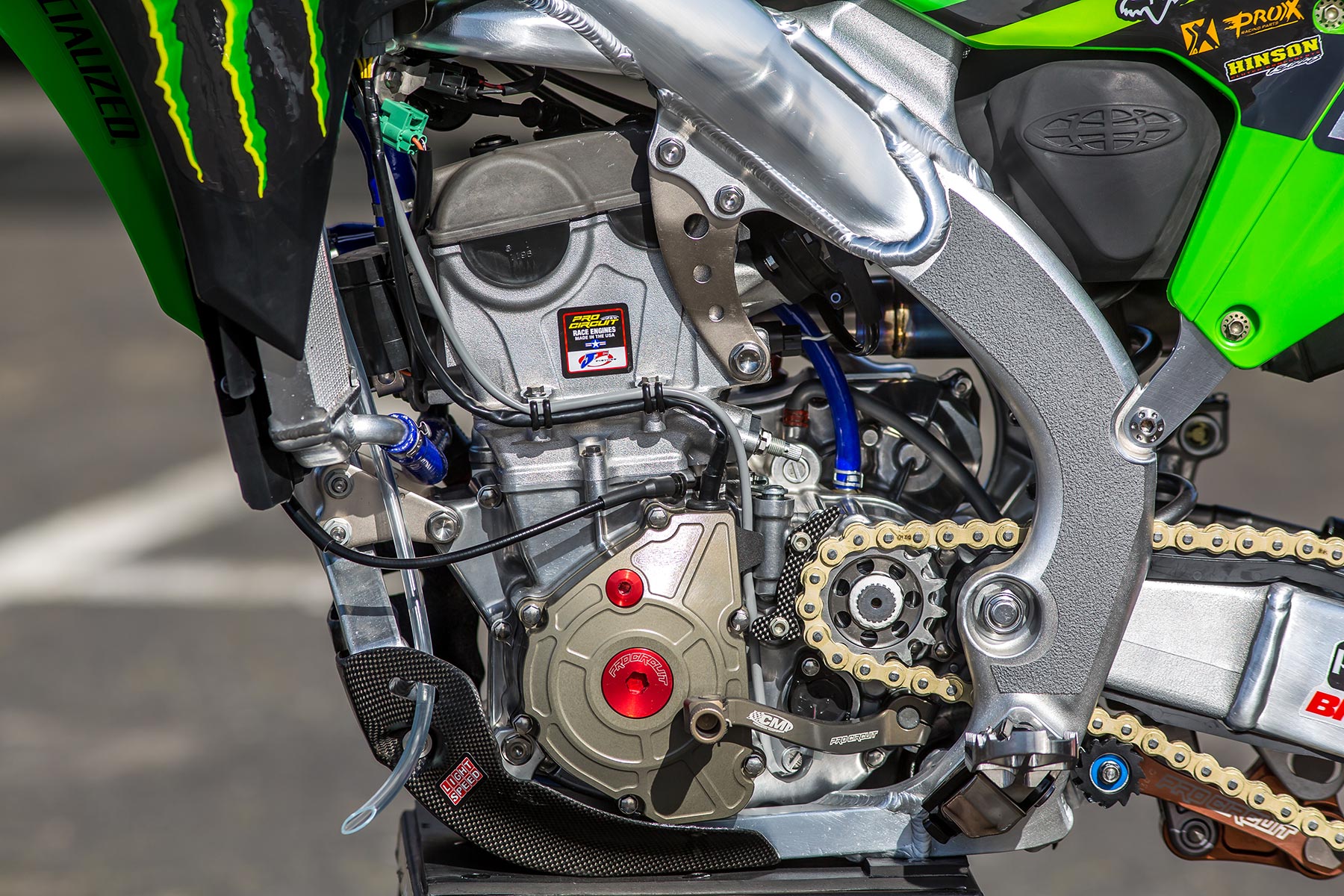 One of the main areas whre Pro Circuit spends their time and resources on is engine development. All that R&D is done in house. Every mechanic actually builds his own engine. Ivan Tedesco has also helped by spending countless hours on the Pro Circuit test track and riding on different packages for the race team. If you follow any of their riders on social media, you will know that this team tests….. A LOT. Most of the guys on PC currently ask for a hard hitting bottom especially in supercross. A good amount of the engine tuning can be done through map changes. 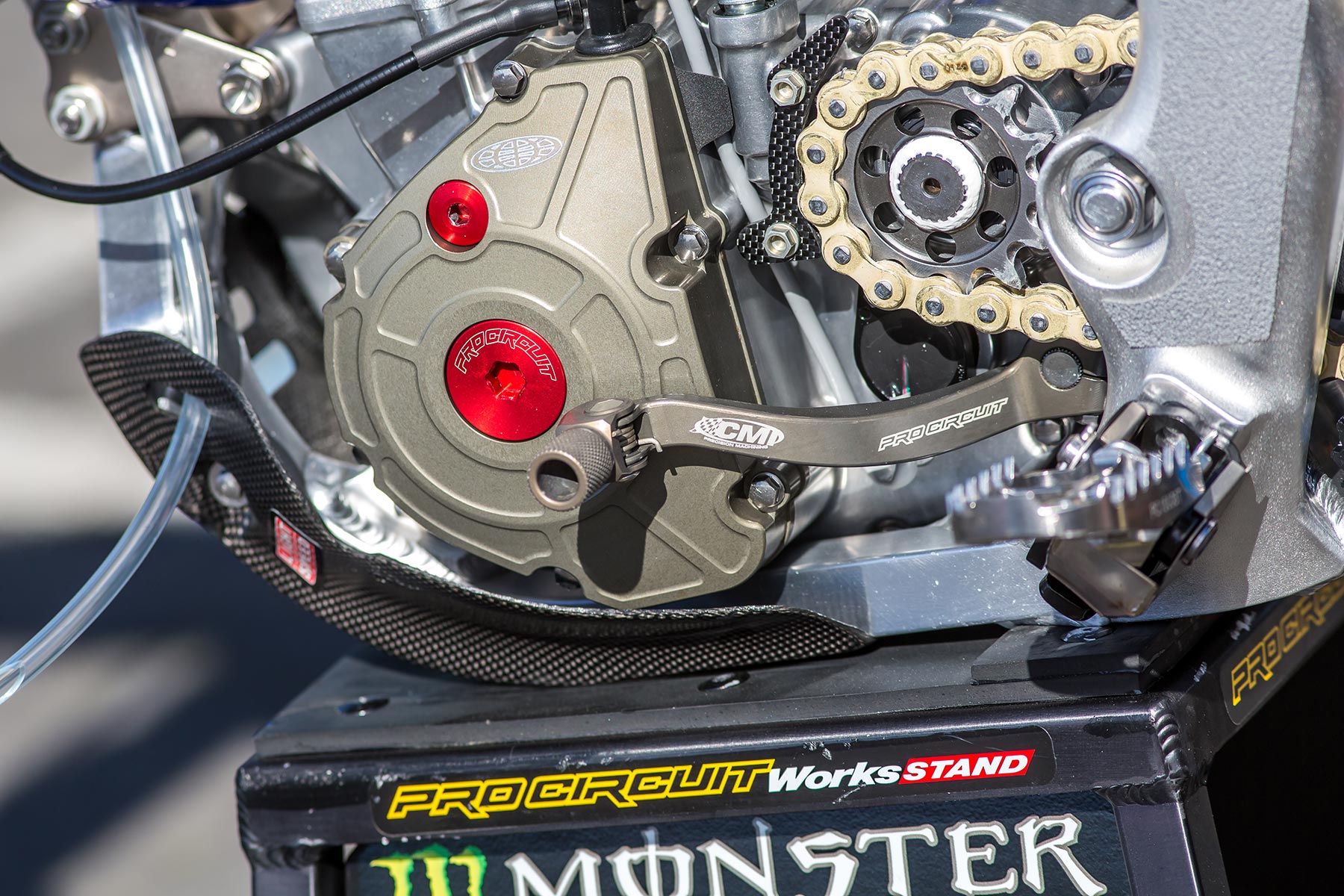 An all-new and re-designed billet aluminum ignition cover is seen here above along with Pro Circuit’s red anodized engine plug kit. CMI makes a unique shift lever that blocks from mud caking up in the joint of the shifter tip. You’ll also notice the Lite Speed skid plate that protects the under belly of the motorcycle. Pro Circuit has worked a lot with Lite Speed to create a skid plate that is protective but not too bulky. 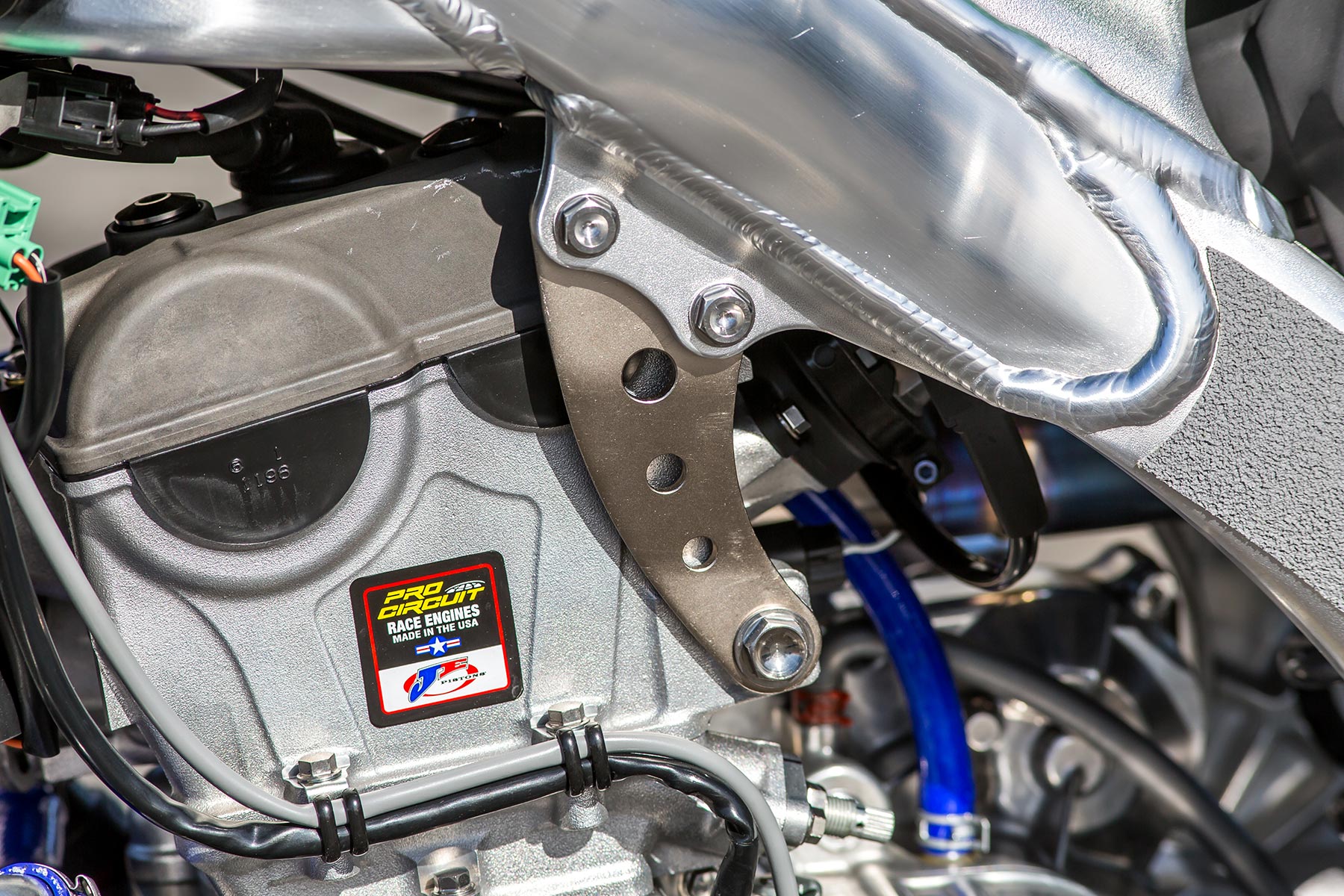 This year Pro Circuit is running what they call “holy head stays ” They have had them in years past but the majority of their riders are on them this year. Zimmerman explained that it helps with the flex of the motorcycle and with the current package they have it really makes a significant difference in feel. 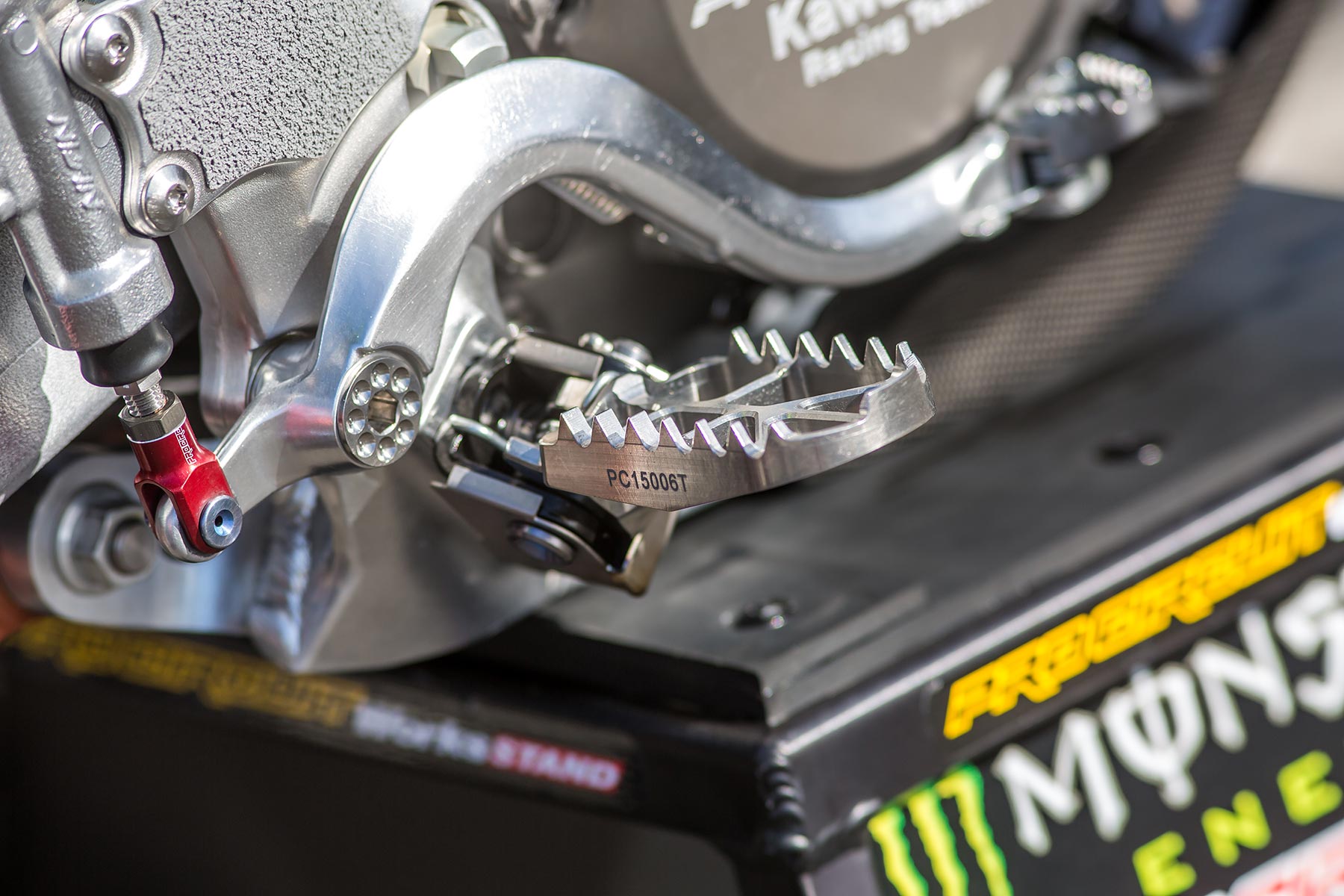 The footpegs are machined from a solid piece of billet. They are one-off components built by Pro Circuit with no welds and engineered for durability. Adam actually runs a stock footpeg mount. The stock mount gives the option to do the lower setting on the frame and creates more room for a taller rider. Other riders are riding on something different. You can also find the Pro Circuit brake clevis here mounted to the brake pedal. This brake pedal is actually off an SR Kawasaki with a folding brake tip. 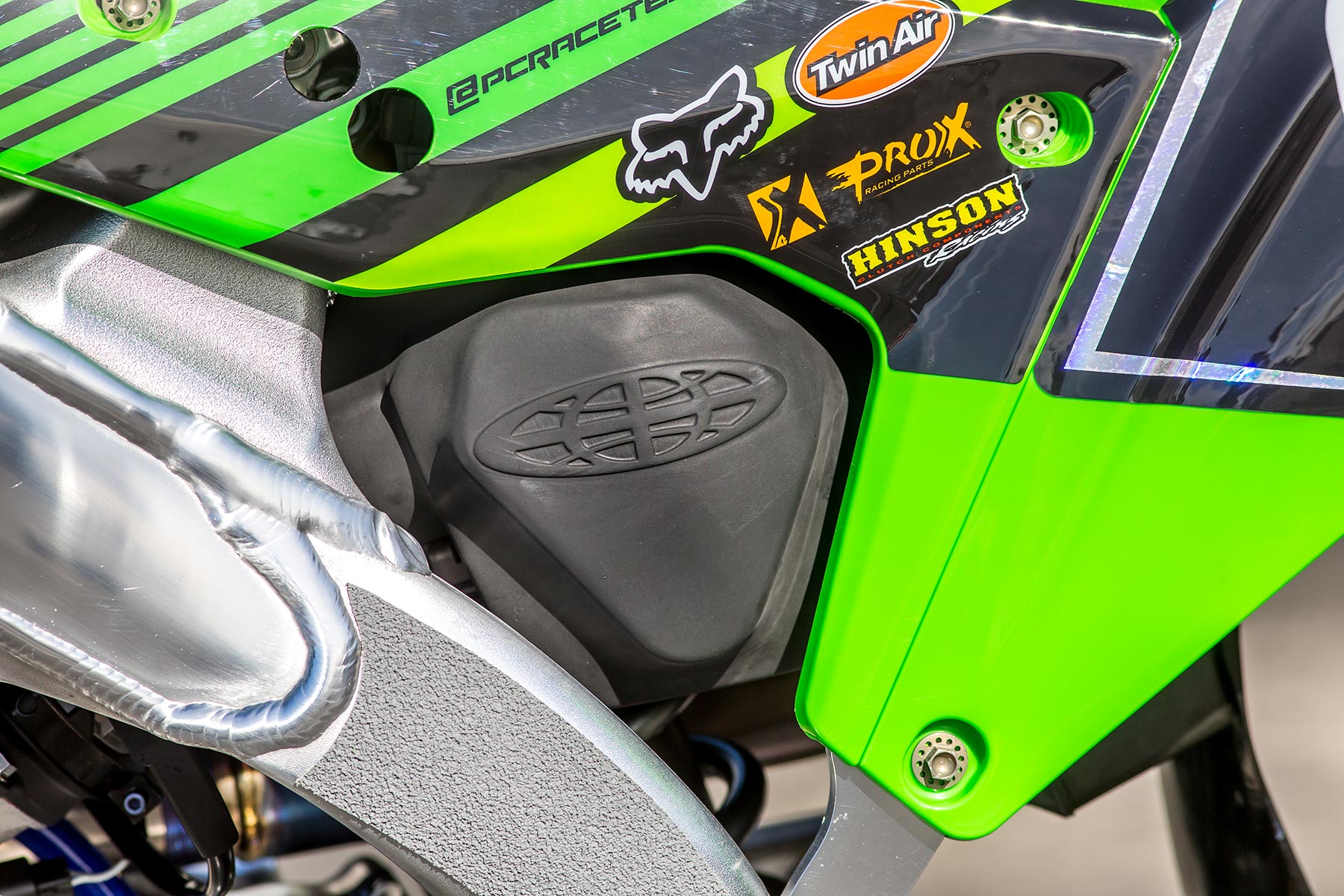 The Pro Circuit air boot is something Mitch Payton and the team spend a lot of time developing to better suit their engine package. What you see here may not be for sale now but will be in the near future. Pro Circuit will do a base and possibly have several generations that follow after that because they are fine tuning it until they hit the mark in quality & performance needed at the race level. Mitch is pretty adamant about racing on what Pro Circuit sells to the consumer. A lot of the parts on Adam’s bike can be purchased for use. 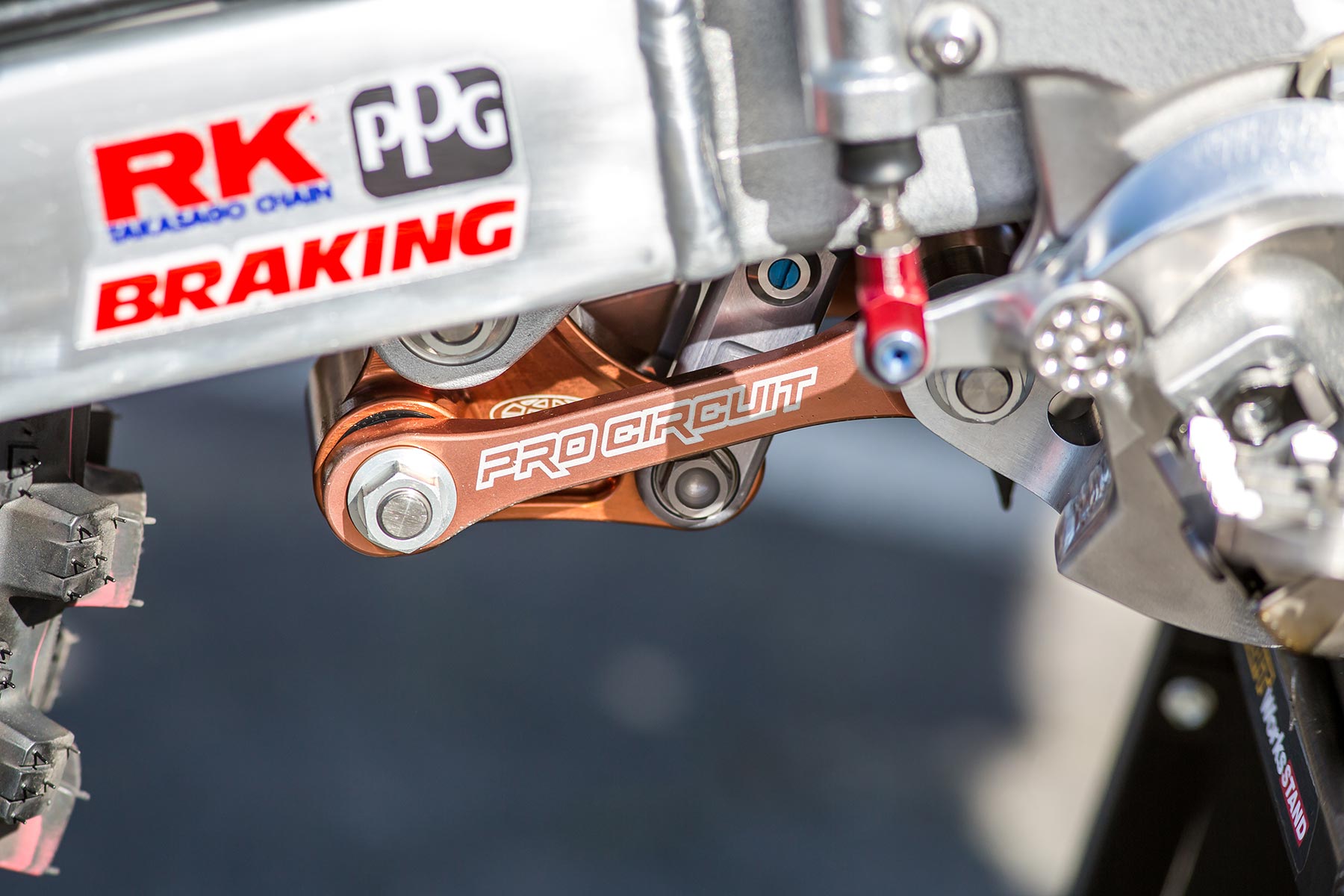 A Pro Circuit link is added to the rear of the bike. This is one of those very pieces that are sold frequently out of PC to the every day consumer. 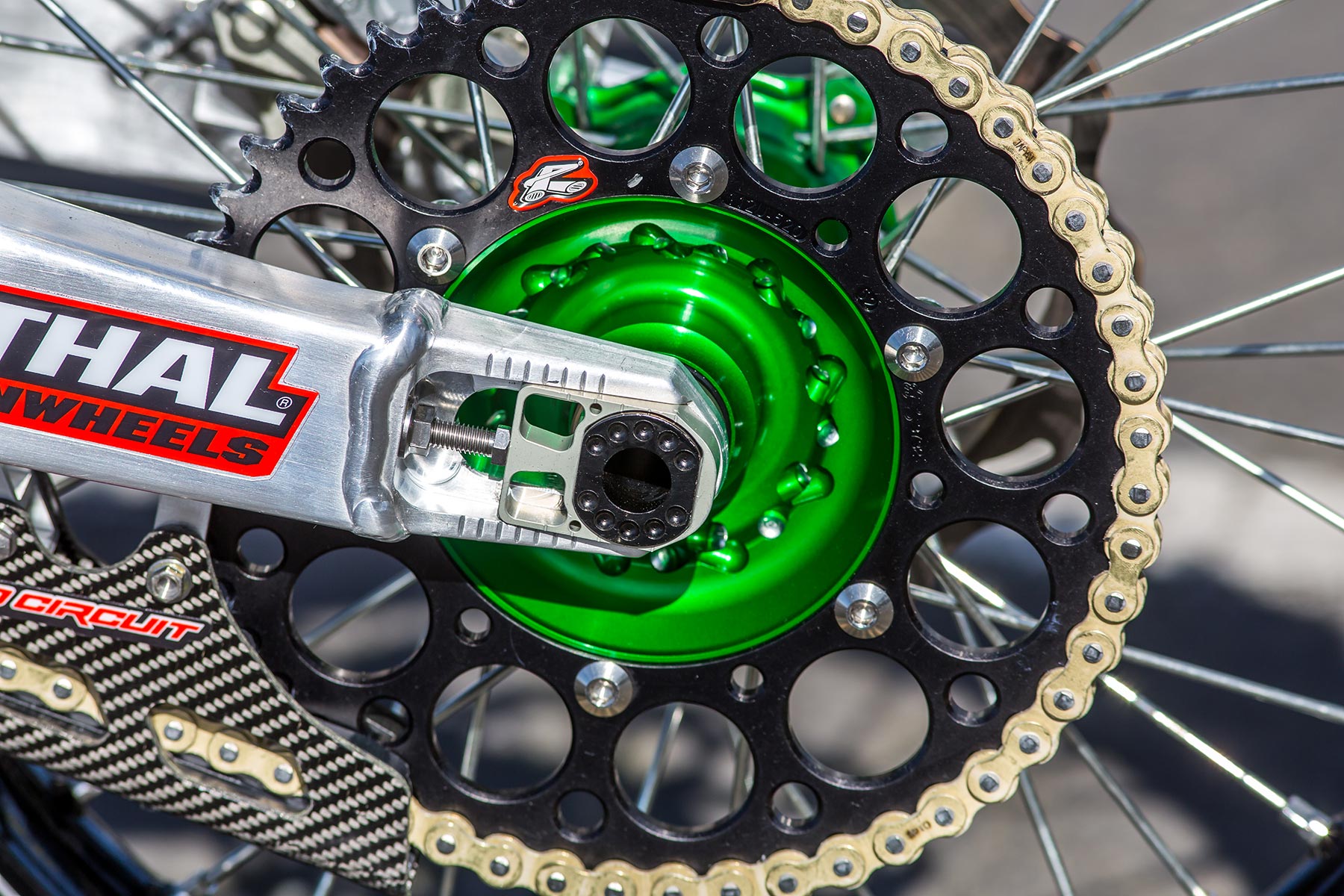 Out back you’ll find a Renthal sprocket and Pro Circuit carbon chain guide as well as KHI (works) anodized green hub. In Supercross the team doesn’t typically change the gearing once they find a comfortable combo. The front and rear axles are titanium and DLC coated for wear resistance as well as ease of installation. 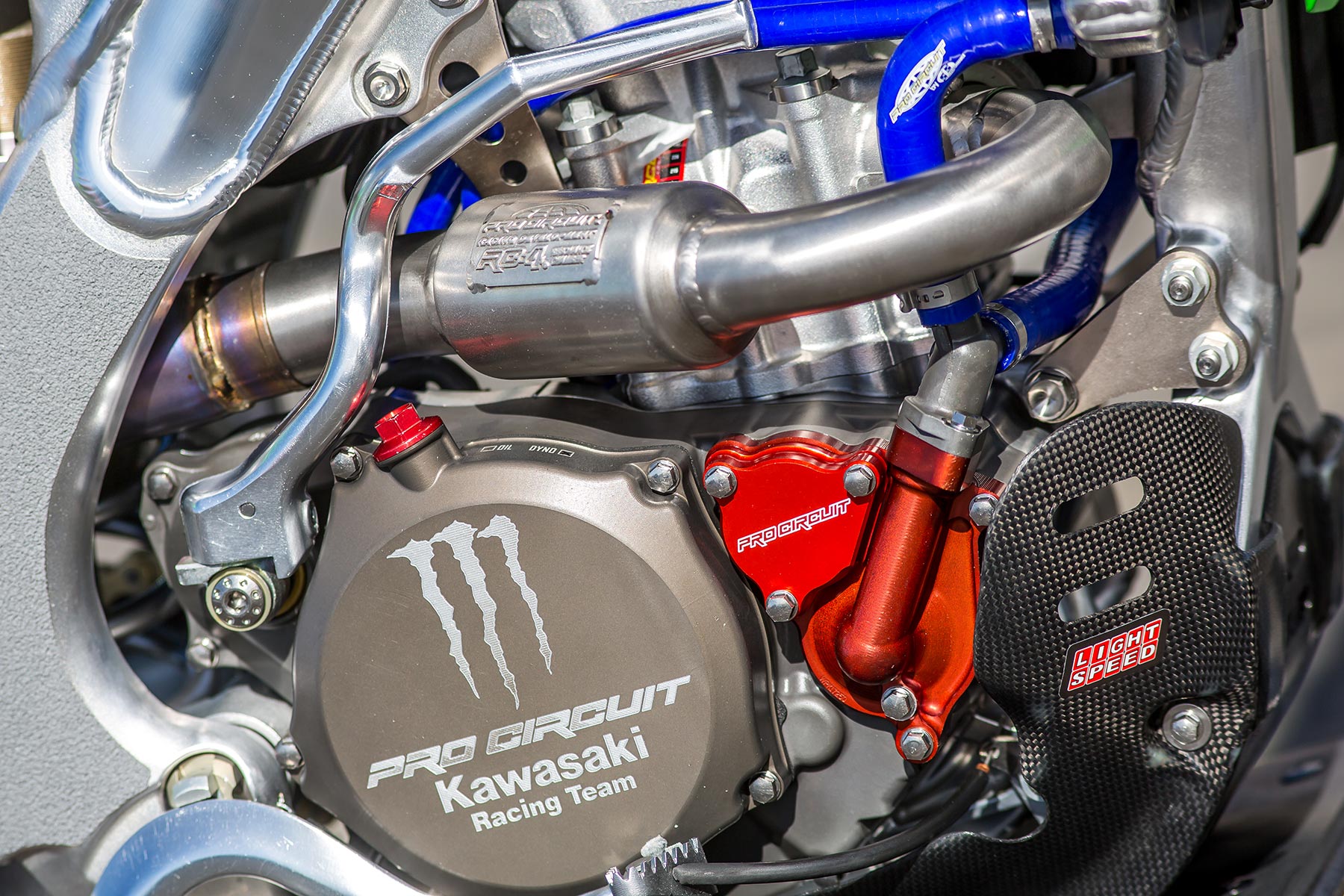 Hinson provides all the clutch components on Pro Circuit’s race bikes. The trick blue hoses are offered by Pro Circuit. Pro Circuit water pump impellar and cover as well as oil filter cover are also shown above that are available from Pro Circuit. 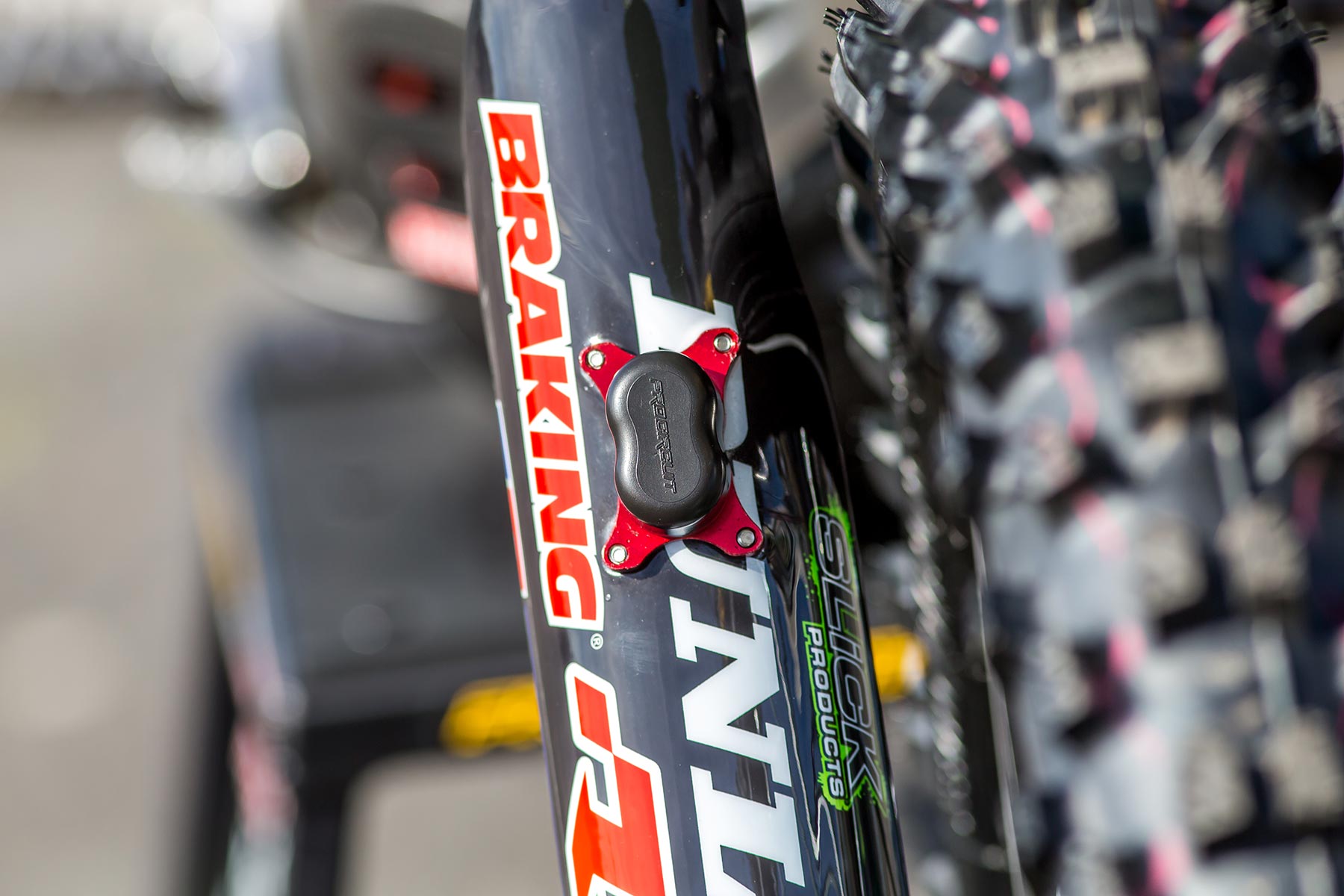 Adam has a double button holeshot device. It gives a top option and a lower option. It depends on the start and traction that is available that day. 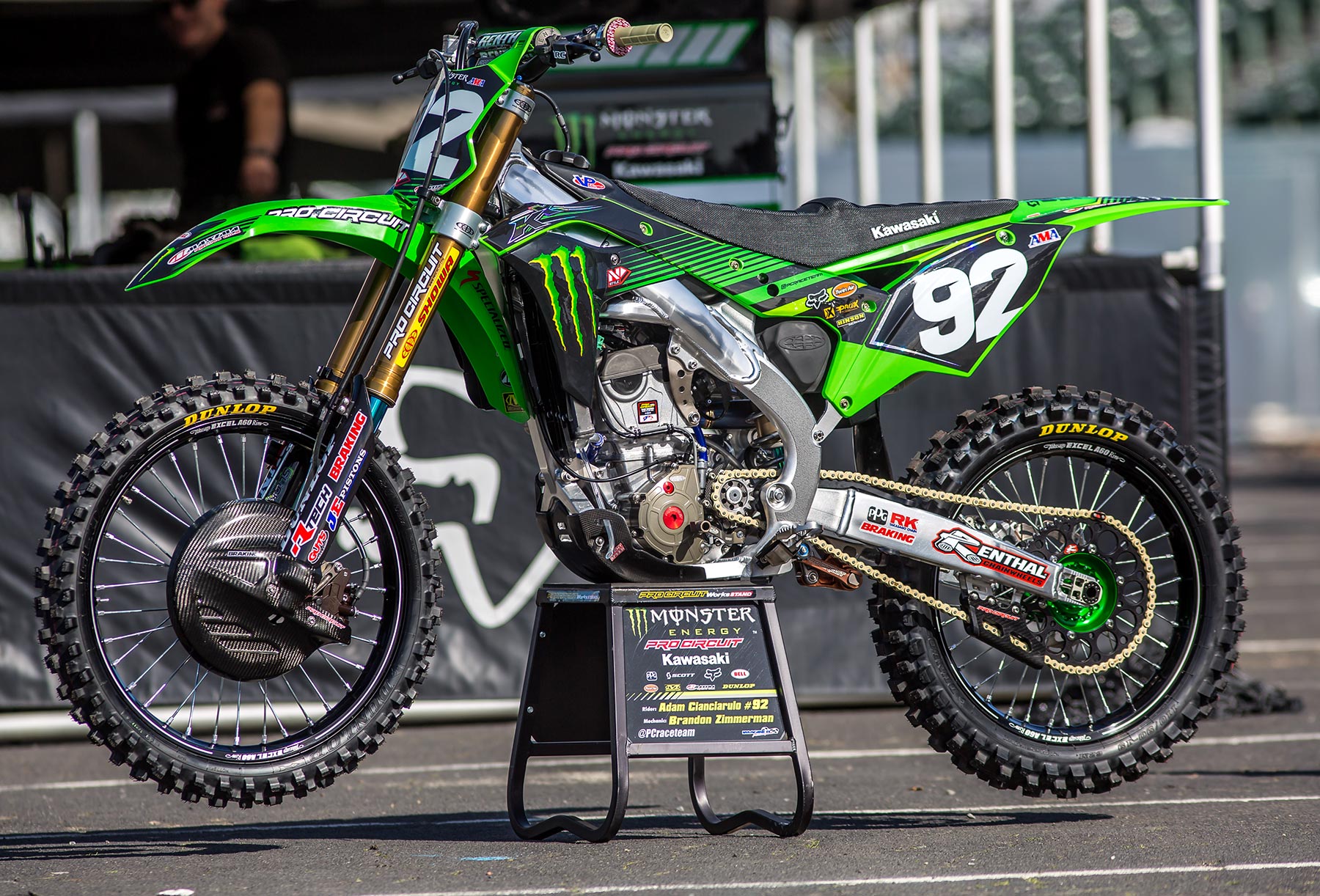 It is clear by the logo placement that Twin Air provides all the air filters for the team. A fun fact you may not know is that they also help with Pro Circuit’s throttle bodies. 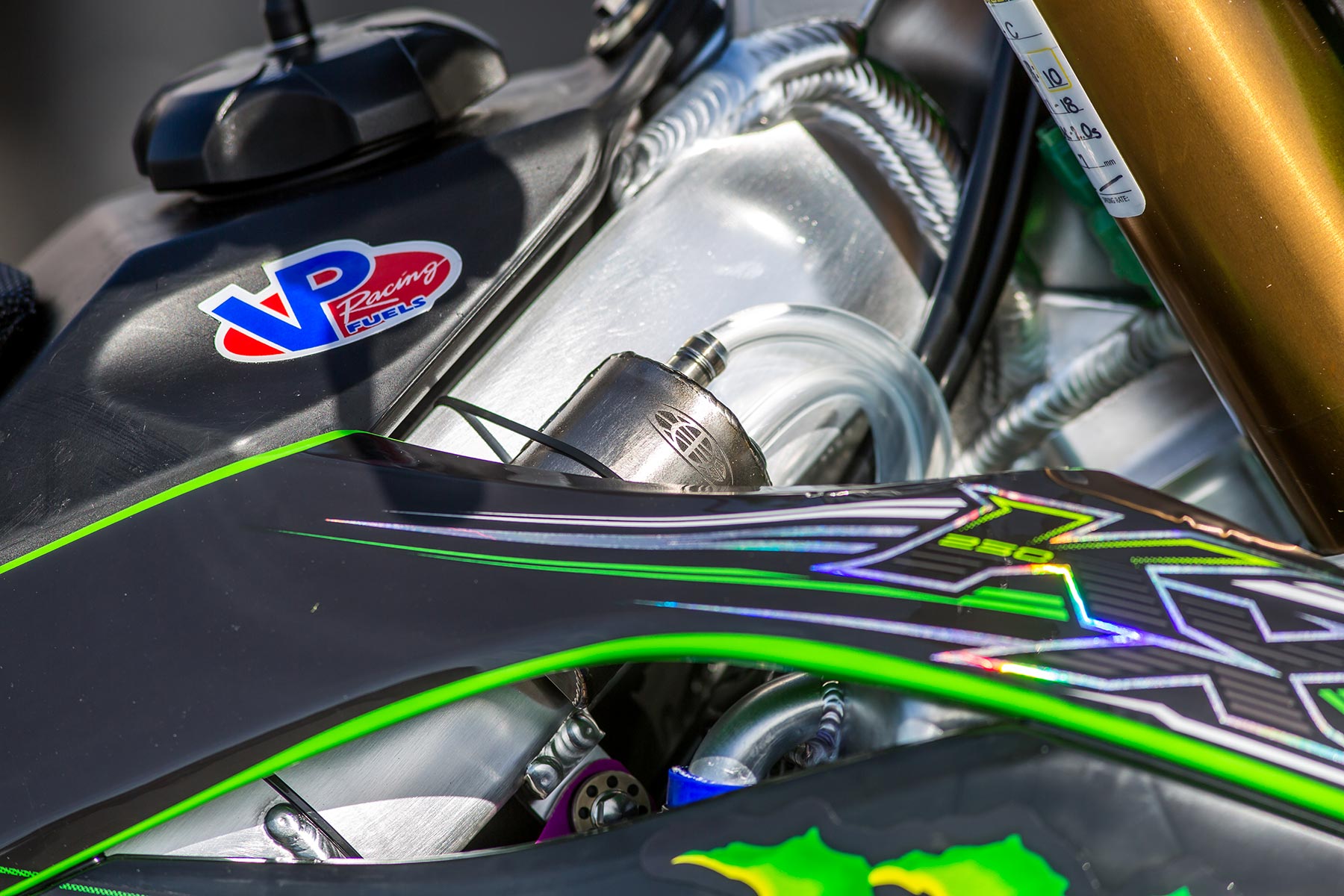 The famous “Catch Can.” This connects to the over flow on the radiator and will capture coolant when the bike gets hot. The coolant goes back into the radiators once the motorcycle has cooled down. It is designed so the bike doesn’t run dry in the course of a race. 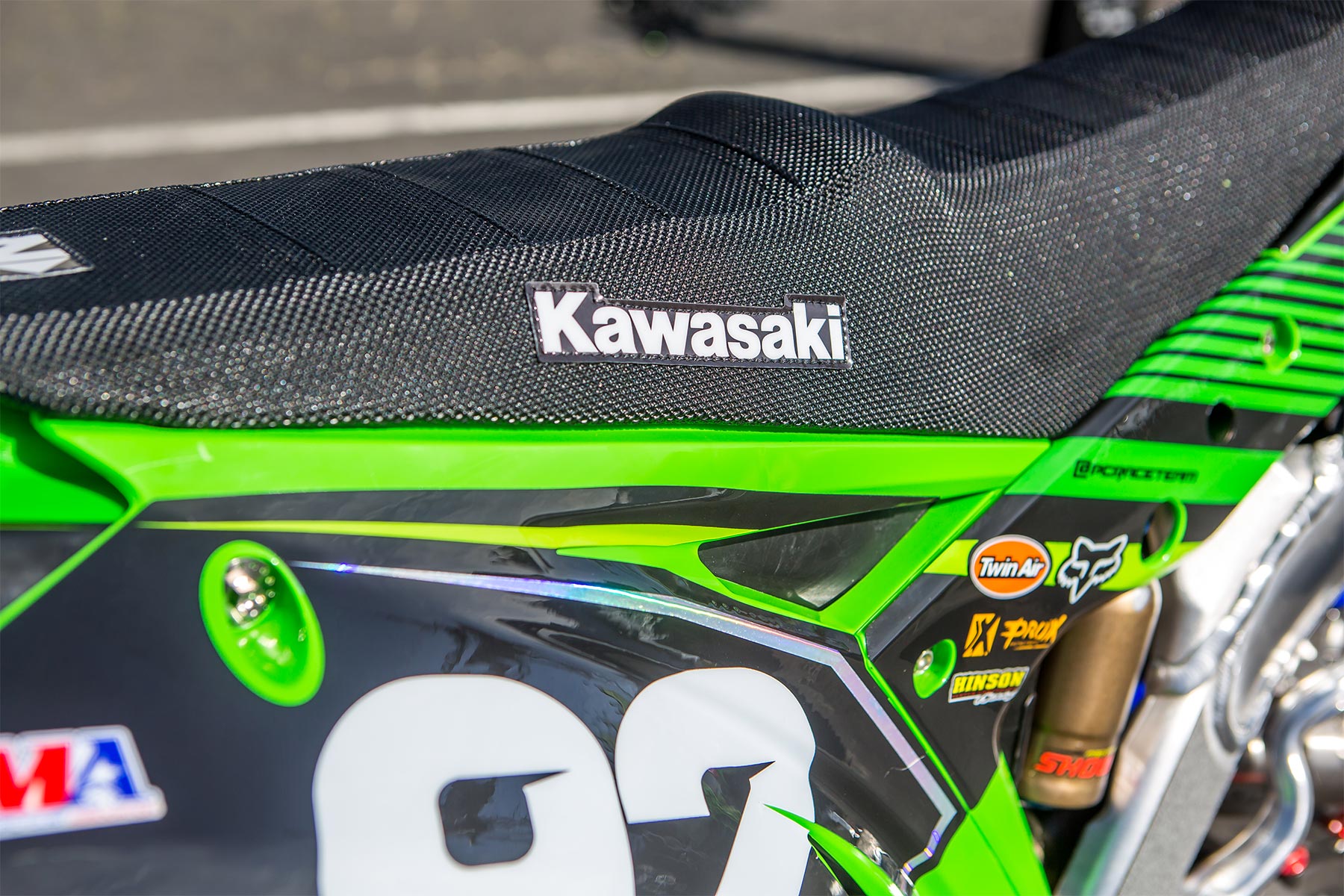 A bump seat is added to keep Adam in place, mostly for the starts. He is one of the only riders on the team with this unique bump seat style. 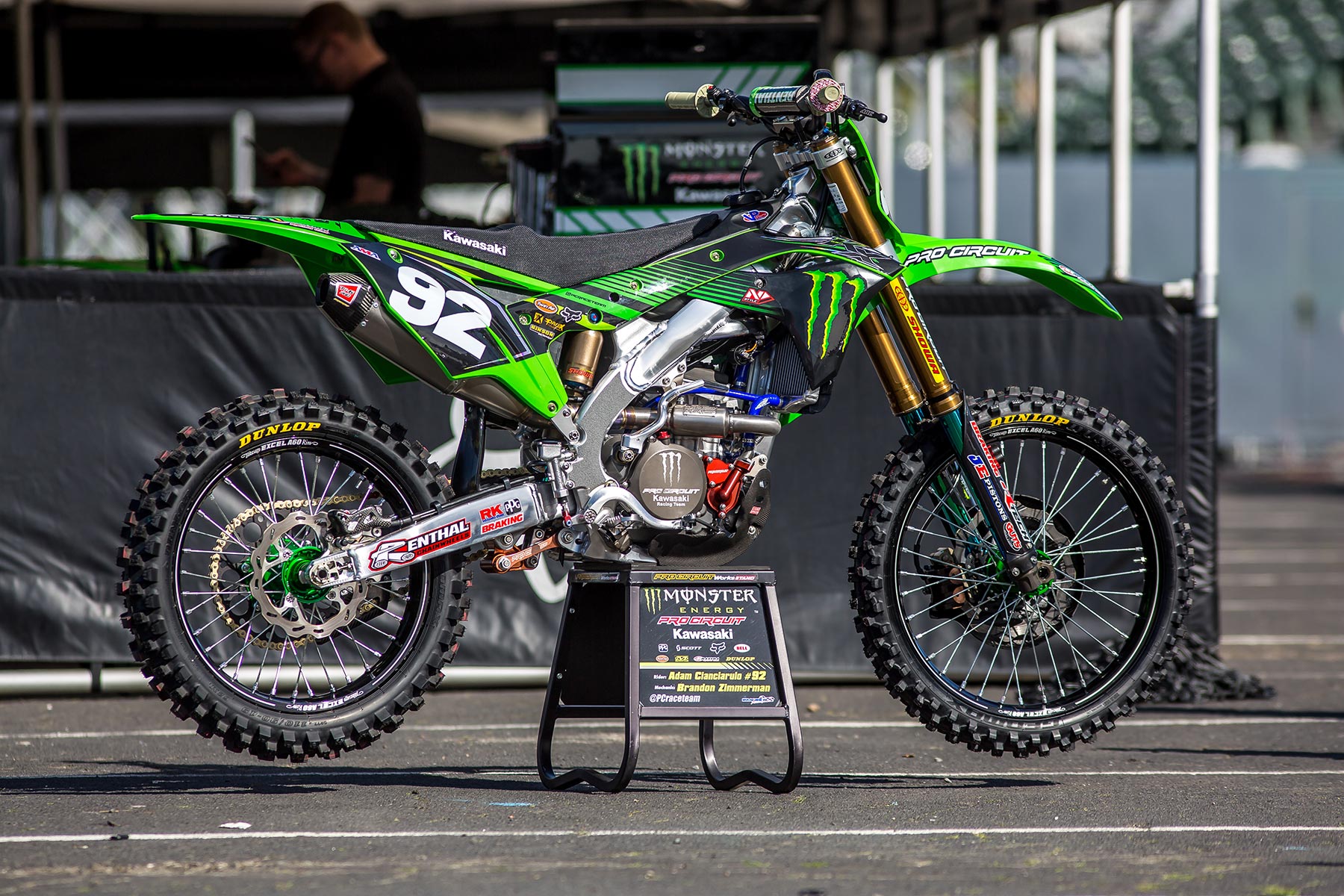 To top off Adam’s Factory bike, Maxima handles anything lubricant or oil, R Tech provides the plastics and N Style does the graphics with a collaborated effort from Pro Circuit. 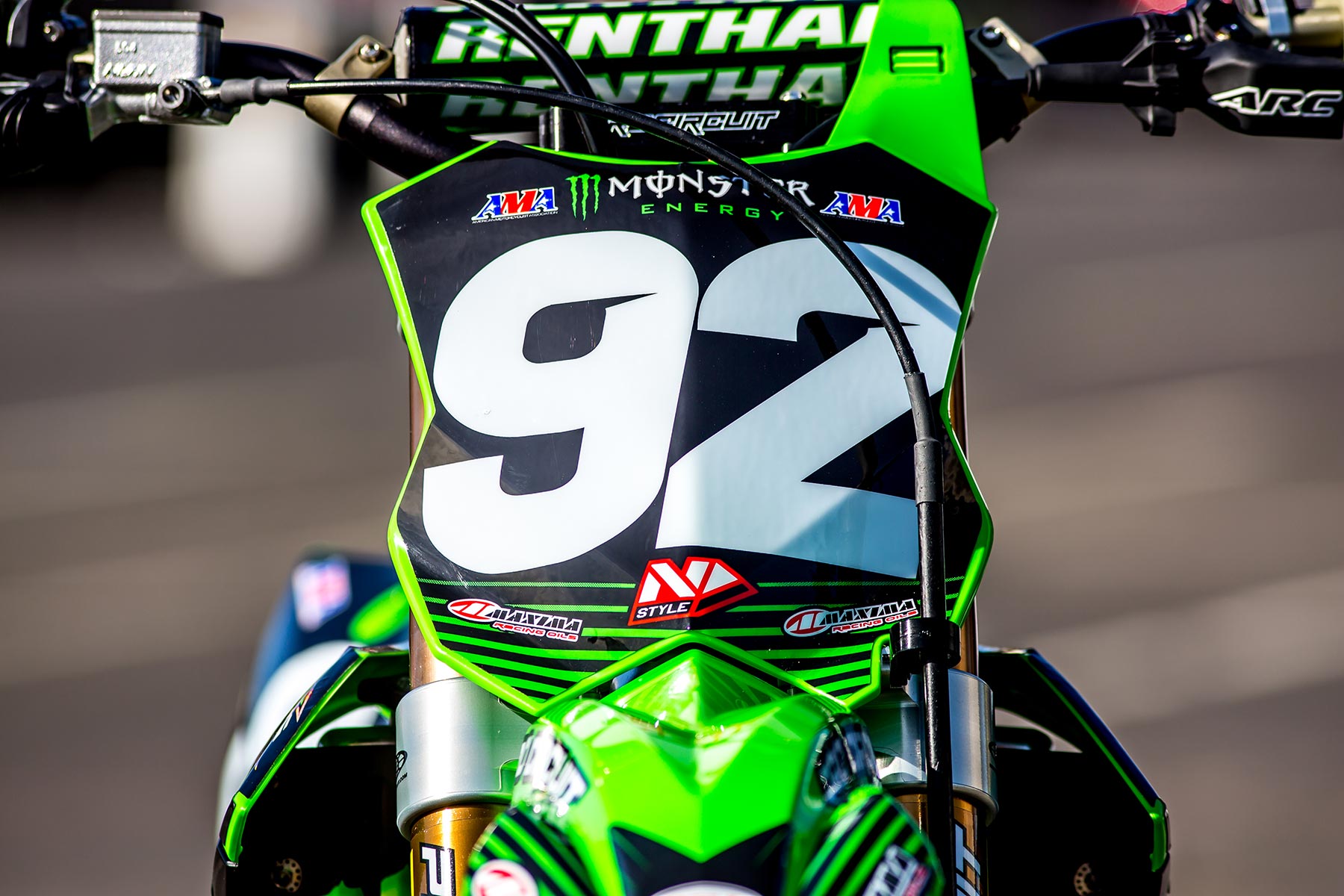