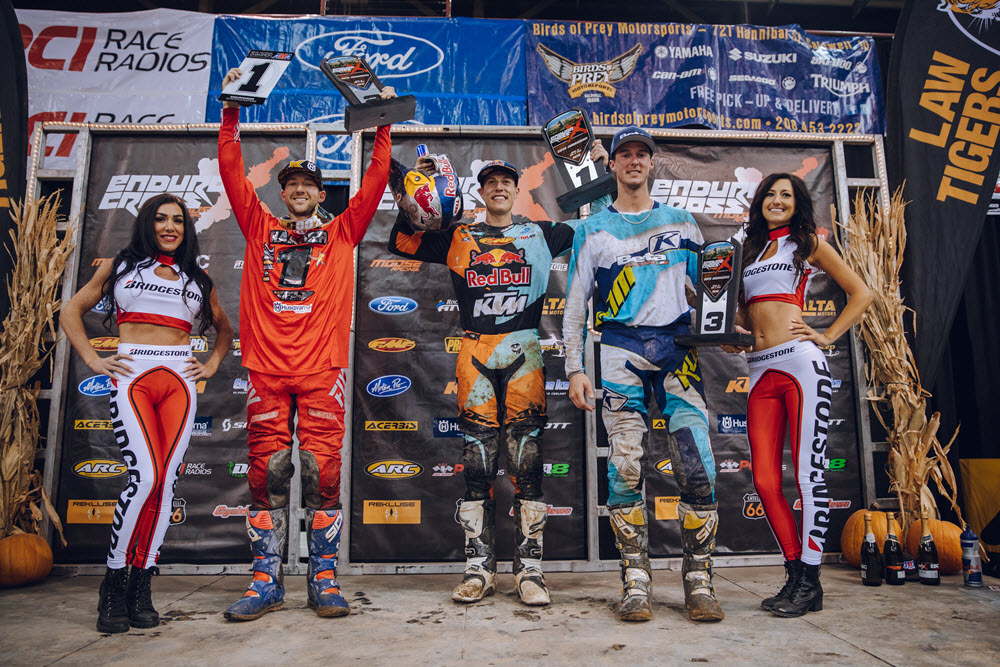 Rockstar Husqvarna’s Colton Haaker locked up his second AMA EnduroCross championship with a conservative second place finish at the Boise finale. FMF KTM’s Cody Webb did everything he could to hang onto his number one plate by taking the win in front of another large and enthusiastic crowd. Third place for the night went to Beta’s Ty Tremaine, who also narrowly beat SRT-Husqvarna’s Kyle Redmond for third in the championship after both battled for most of the main event.

Haaker started the day by taking the fastest hot lap time just a tenth of a second faster than Webb. Tremaine, GasGas backed Geoff Aaron and Dustin McCarthy rounded out the top five.

Haaker kept the momentum going in the first heat race by taking the win and bonus point ahead of Tremaine. Ty Cullins rode his Beta to third place. Mason Ottersberg, Cooper Abbott and Max Gerston also earned spots in the main event.

In heat two, Webb took the win and matched Haaker with the bonus point. GasGas backed Noah Kepple finished a strong second. Redmond, Aaron, Nick Thompson and Cory Graffunder rounded out the top six spots to move to the main event.
The bracket races were up next for the top four riders from each of the two heat races. Those riders race in single lap, head-to-head races. Haaker and Webb moved through the brackets to face off for a bonus point and first gate pick for the main. Webb took the lead out of the first turn and led about half of the lap before he pushed too hard into a sand turn and went down. This handed the win and bonus point to Haaker.
Cullins blasted his Beta 300 two-stroke to the front at the start of the main event, just ahead of Haaker and Webb. The two championship combatants moved past Cullins, who had troubles and dropped back to ninth by the end of the first lap. Haaker led the first two laps and Webb jumped a huge log double to close right up to his back wheel and then made a pass for the lead on lap three.
Webb kept jumping the large double to open a gap on Haaker, who was riding a conservative race to clinch the championship. Haaker made it through the No Joke Lane on lap nine of fifteen and the only drama remaining for Webb was to make it through the No Joke Lane himself without losing time. Webb did that on lap eleven and went on for his third win of the season.

The battle for third in the race and championship between Tremaine and Redmond was intense. Redmond came into the race with a single point lead over Tremaine so whichever rider finished in front of the other would take the spot. Tremaine quickly worked up from eighth position on lap one to lock into a battle with Redmond. They traded third a few times before Tremaine opened a gap in the closing laps. Redmond held on for fourth position in the race and championship.

Fifth place went to Cullins, who recovered from his tough first lap. The strong finish also earned Cullins the Junior EnduroCross championship, which is a championship within a championship for riders twenty-one and under. The nineteen-year-old also finished the season in sixth place.
Aaron finished the race in sixth to cap off a solid season that ended up with him earning fifth in the championship, just a single point ahead of Cullins. For Aaron, a former main event winner who has raced most of the EnduroCross events since the first one in 2004, this was his best season in several years.
SRT-Husqvarna’s Cory Graffunder finished seventh in only his third race back after a serious ankle injury. Beta’s Gerston finished eighth in only his second race back from a hand injury. Kepple finished ninth after battling with a large group of riders for the fifth spot. Abbott rounded the top ten on his RPM Team Maxxis KTM.

Colton Haaker:
“This whole season it’s been Cody (Webb) and I going back-and-forth, back-and-forth and the championship really came down to a few key moments, like the halfway point in the season when we’re tied, and I knew what we had to do to win. For me, I think last weekend in Everett was the championship night. I knew if I could win there I could win the title. I never won in Everett before that, so I think I made it happen there. Tonight, I got a great start and rode clean and smooth and Cody passed me and got a bit of a gap. He was riding really solid tonight and taking some extra risks that I didn’t have to. I just wanted to bring it home here and I’m so happy we did. It’s amazing to come back and win the EnduroCross title again after losing it. It wasn’t easy coming back from not winning and gaining the confidence to get back up to the front.”
Cody Webb:
“The season and my riding were good despite how little prep time I had coming in. I got the win at round one in Prescott and that was just really lucky. Even by Costa Mesa I only had a couple 12-minute motos in me before the race. I just fell apart in the main and couldn’t hold on. The rest of the year I focused on getting back to doing full motos in training. That had me riding better and by Denver, things got really aggressive and I couldn’t seem to keep up the intensity there. So, I started doing more bracket-style training, riding as hard as I could go. I felt like a steam engine this year. I started out sluggish and kept throwing more fuel to the fire and, by the end of the year, I was back to full-steam ahead. Losing the championship is a bummer but it’s nice to cap of the season with a big win here in Idaho like this. I was doing stuff on the track no one else was doing and it was fun to win the crowd over by jumping big stuff. Now, it’s off to get my arm pump under control and SuperEnduro prep.”
Ty Tremaine
“The season started off great with the Alta electric bike. They were putting in a lot of effort with me and the EnduroCross program and they, unfortunately, closed up shop. So, I’m really lucky Beta took a chance with me and I just tried to keep my head down and not let anything get to me so there really isn’t a reason I shouldn’t have performed on any bike. Going into the off-season I’m working really hard. I’m really happy about where we’re going from here.”
Ty Cullins
“I’ve been working super hard all year. My main goal was to get top fives and, about halfway through the season, I was in the lead for the Junior Championship and I focused on that as the goal for the year. It’s just been a great year. I finished top-five in half the races, I shared the holeshot tonight with Colton Haaker and I am just looking forward to getting the details for next year dialed in and come back better than ever.”

FMF KTM’s Kacy Martinez came into the Boise final with a three-point lead over AE Racing backed Shelby Turner in the Women’s class. Turner was the two-time defending champion and, if she won the race, she would tie the points and take the championship with the final race finishing position being the tie breaker. Martinez took the lead at the start, but Turner made a block pass to take the point position about halfway through the first lap. Martinez then passed Turner back on the next lap with a similar block pass in the same corner leading into the Matrix. A lap later, both riders had trouble in the wood pit and were bar to bar as they both pushed their bikes to get going. Martinez came out with the lead and held the position for the remaining two laps to take the win and her first EnduroCross Championship. Beta’s Morgan Tanke finished third in the race and the championship.

Kacy Martinez
“I put a lot of effort into this series this year and it’s the last National Championship I had to win before I won all the major off-road series titles in the United States. Last week I was thinking back to how much I’ve put into this sport and, every series I’ve committed to, I’ve come away with the number one plate. So, I’m very happy about that. Coming into the first round this year I won and then I struggled a few races, so I went down to KTM’s track and I just put in a lot of work with Antti and the team. They pushed me really hard and we got it done. I’m very happy to win those last three rounds and get this title.”
Martinez won the championship with 122 points over Shelby Turner who earned 116. Tanke was third with 91. Allie Dorsey and Monique Johnson rounded out the top five for the season.

Destry Abbott won the Vet class main event and the championship. The forty-six-year-old was still undergoing chemotherapy treatments up until a few weeks before the final but still managed to win all six races. David Stirm finished second at the Boise event and Jon Seehorn rounded out the podium. Dan Hayakawa and Craig Thompson finished the season in second and third in the Vet class championship.

In the Amateur B class, Sam King took the win ahead of Tyler Smith and Noah Tidball.

Richard Larsen and Coleman Johnson battled back and forth for the TrialsCross class win in Boise. Larsen came away with the win but Johnson, who is just thirteen years old, finished second and won the TrialsCross season championship. Hayden Simmons rounded out the Boise TrialsCross podium.

After a strong season with packed arenas and exciting racing, the EnduroCross team is looking forward to 2019. The 2019 series schedule will be confirmed in the coming months. Keep an eye on the www.endurocross.com website for details.

You can watch the 2018 AMA EnduroCross Finals on beIN Sports this Thursday, November 8 at 9 pm EST. Get more details at www.beinsports.com.