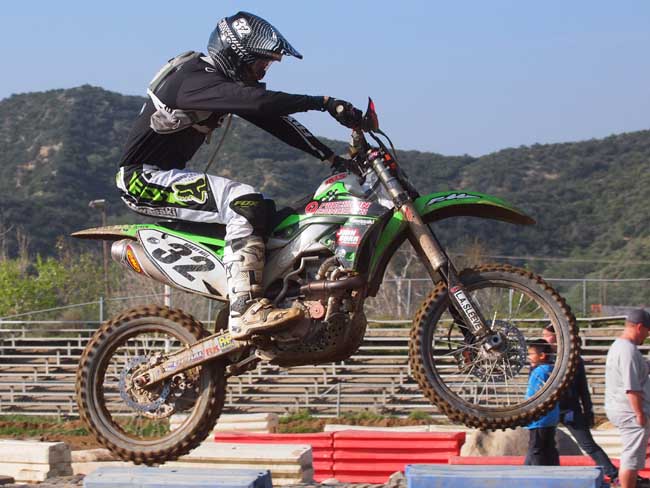 Robby Bell had one of his easiest and smoothest races ever.
The HYR Six Hours of Glen Helen was held Sunday and it was a runaway win for the Precision Concepts/John Burr team of Robby Bell and Justin Seeds. Bell started and pulled a healthy lead after one lap of the 10-mile course. The course itself, which was again designed by the Dirt Bike staff, was considered more technical than most with large, continuous sections of single track trail. Those segments were broken up by the Glen Helen National course, parts of the county regional park and the Lucas truck course. It took the expert teams over 20 minutes a lap.
It seems that no matter what the John Burr Kawasaki team does, it is destined to finish second in all the Glen Helen endurance races. The team was headed by Gordon Ward once again, and was situated solidly in second when their KX450 broke down in a section that was as far from the pits as possible. They got towed in, repaired the bike and spent the rest of the day catching up. They were second well before the finish.
The performance that was most impressive was that of Nicolaus Gustavsson, who is visiting from Sweden. He won the Ironman class and actually finished fourth overall behind the Open Expert team of Brad Pace. Usually, the top solo rider in this event finishs just outside of the top ten.
The next Glen Helen endurance race will be the 12-Hour, held in June. This one will be held in daylight hours this year, and there is some talk of shortening it to a 10 or 8 hour. If you would like to give your opinion on the matter contact Lori Bryant through the racetrack’s website at www.glenhelen.com, where full results and lap times can also be viewed.

Nicolaus Gustavsson won the Ironman class and was fourth overall.