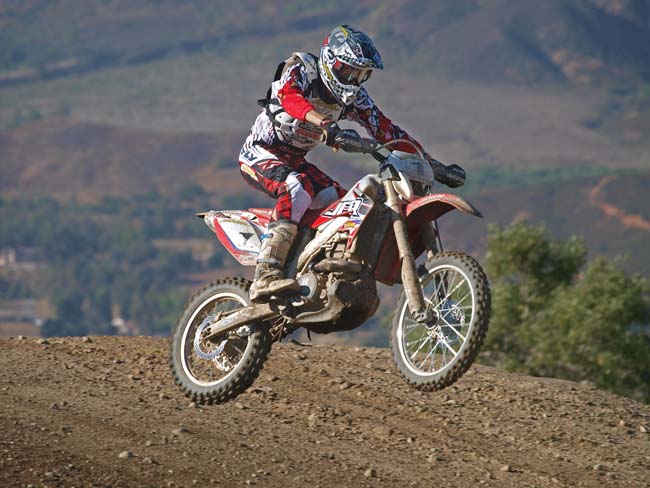 The Honda/Yamaha of Redlands 12-Hours of Glen Helen Was run this weekend and it was once again a brutal ordeal. This particular round of the Glen Helen Endurance Series has no pro class, so riders race for glory, no money. The rules allow four riders to a team with an extra bike permitted, so long as it is impounded.
The course, which is designed by the Dirt Bike Magazine staff, was 8.5 miles and included the Glen Helen GP track, the REM track, the Lucas truck track and about four miles of technical single-track trail. Only about 40 percent of the course is accessible to a heavy equipment (including a water truck) so the remainder was a true off-road event, with dust, ruts, whoops and rocks. But the most serious factor was the weather. It was hot, dry and dusty, and that almost led to the race’s undoing at the very start. About two miles into the race, someone went through some caution tape in the dust. Then about 15 riders went in the wrong direction. They all ended up at the San Manuel Pavilion which was preparing for Summer Mayhem, a big-ticket outdoor rock concert. Some riders turned around, others were actually detained by Security.
It all was sorted out by the second lap, but a few teams lost significant time in the confusion. But the leaders had no such issue. Almost nothing seems to throw the JCR Honda off-road team off its game. Johnny Campbell Racing was headed by Colton Udall with Ryan Dudek and David Kamo. Another Honda team had Colton’s brother Ian Young, 15-year-old Tucker LaRue, Evan Kelly and Corey Peeman. The spoiler for the Honda boys was the THR team of Ryan Abbatoye, Jason Ramsey, Tallon Taylor and Sean Renshaw. Also a serious contender was the Open sportsman team of Thomas Spalliero, mostly dangerous due to the recruitment of WORCS Pro 2 Champion Justin Seeds.
In the early laps, those teams mixed it up with Ben Johnson’s Kawasaki team, each taking a turn in the lead. But by the halfway point, the JCR “A” team had almost a lap on the rest of the field. It was to stay that way for the rest of the race. In the end, the two JCR teams were first and third, with the THR team in the middle. Spalliero’s team had a surprisingly close race from Charles Jirsa’s Husky team and Robbie Butze’s Yamaha team, all with 32 laps.
This was a particularly difficult race for the Ironman class. Many of them were in the group that took the rock concert detour. Ben Adams was the toughest of the field. He built up a two lap lead, then took a bit a of a break on the last lap, giving back half of that. Mike Chastain was second ahead of Bob Boats.
For full results go to www.glenhelen.com.
Ironman winner Ben Adams.

Gary Jones gets dizzy in the corkscrew, a three-turn spirel leading to the Glen Helen bridge.

Charles Jirsa’s team is run out of Husqvarna North America’s back door.

The third-place team was headlined by Ian Young.

With such a long race, riders can go for laps without seeing anyone else on the course. But not always.

The youth team of Megla and Campbell (sons to Tony and Johnny).