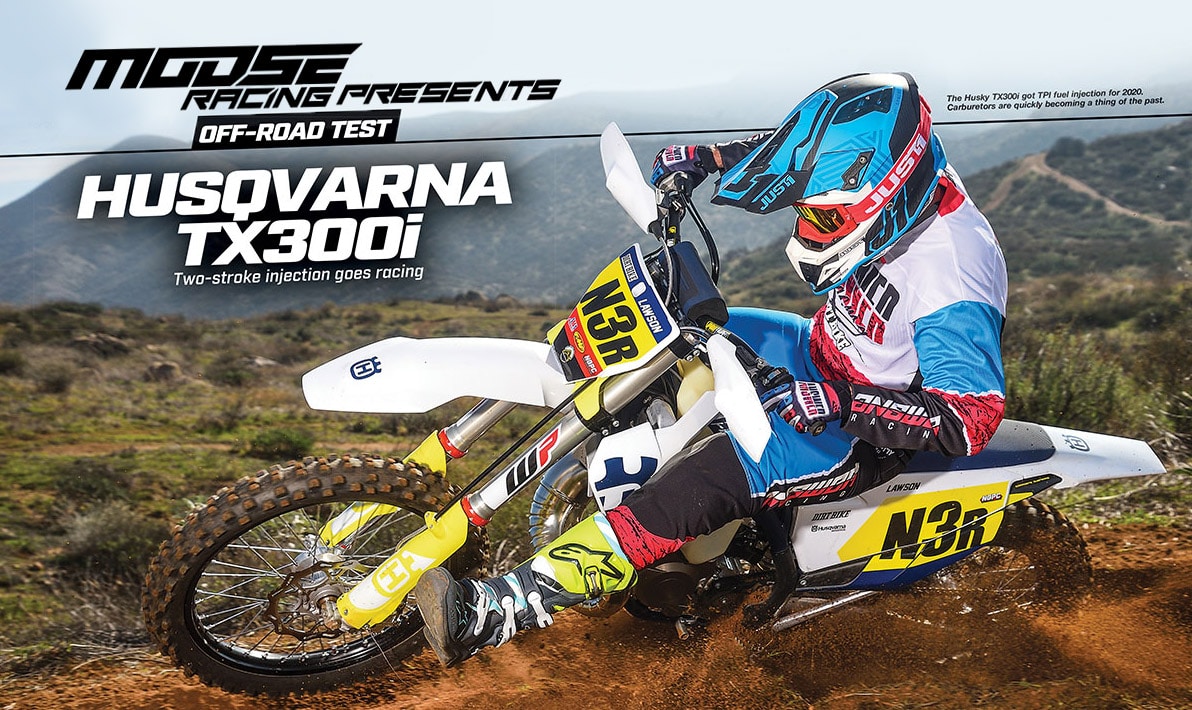 For 2020 Husqvarna is all in with its use of TPI fuel injection on off-road bikes, which now includes the TX300 off-road racer. It only came on Husky’s trail bikes last year, and the TX is considered a fully committed race bike. Since the technology first arrived two years ago, the bugs have gotten worked out until the company is finally ready to take it into competition. Is the concept ready? Even the purists are having a hard time coming up with arguments against it 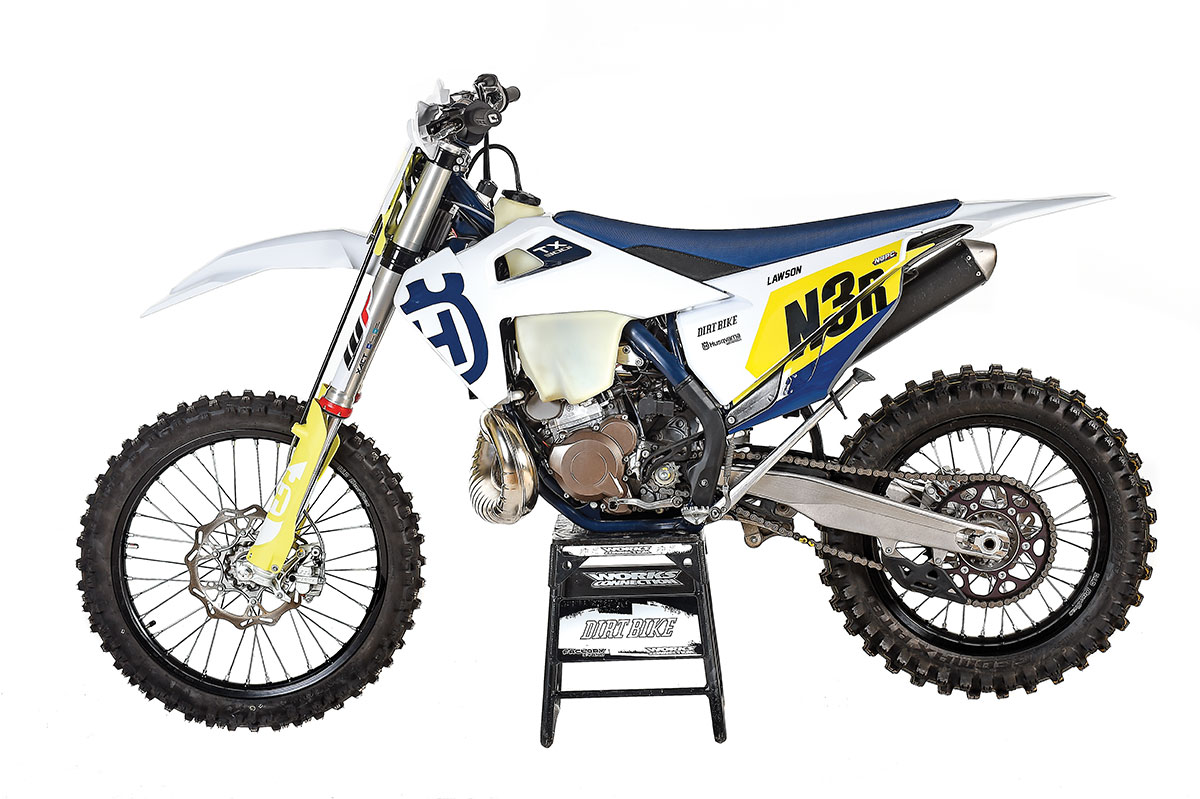 NATURE OF THE BEAST
The new TX300i is the only bike in Husqvarna’s 2020 line to carry the “TX” prefix. In Husky nomenclature, that means it’s a cross between the trail bikes (called the TEs) and the motocross bikes (the TCs). Currently, there is no TC300 in the U.S., but there is a TC250, which is a kick-start MX bike. We’ll go out on a limb here and suggest that the TC250 will get TPI fuel injection sooner rather than later. The TX300 has an electric-start-only motor in the same chassis as the motocross 250. It has WP linkage suspension in the rear and an Xact air fork up front. Unlike the motocross versions, all Husqvarna off-road bikes use Magura brakes, not Brembos. Husqvarna also distinguishes itself from sister marque KTM with a number of different vendors. The hydraulic clutch is from Magura, the bars are Pro Tapers and the rims are D.I.Ds. All the bodywork is Husky only, including the integrated airbox/subframe.

PROS & CONS
Up front the two biggest drawbacks involved with casting off carburetors are more weight and more expense. The 2020 TX300 weighs 223 pounds. We’ve previously established that injection adds about 6 pounds. It’s also more expensive than last year’s TX300, which was pretty much the same bike without TPI. The 2019 MSRP of that bike was $9599. Now, it’s $10,099.

With that out of the way, we can move on to what TPI does for you. First and foremost, carburetors are leaky relics from another era. If a law were passed forcing automobiles, motorcycles and even motocross bikes to return to carbs, there would be rioting in the streets, led primarily by professional mechanics and anyone else who has ever been forced to solve jetting issues. Injection is actually much less complicated than the final generation of the carburetor, which typically had no less than six different fuel metering circuits and a multitude of moving parts for squirting and sucking. The Dell’Orto throttle body on the TX300 has a simple butterfly valve with no float bowl, no power jet and, in fact, no jets at all. There is an oil injector in the intake manifold that eliminates the need to mix oil and gas. All the fuel is added later, as the incoming charge of air (and oil) passes from the crankcase to the combustion chamber via the transfer ports, hence the name transfer port injection. The injectors themselves are supremely simple, little more than on/off switches that operate up to 20 times a second, as determined by the ECU. The only added complication is the fuel pump, which resides within the gas tank. That’s still  the weakest link in the chain. Fuel-pump failures still occur occasionally, but all that results in about 20-percent better fuel economy and 50-percent better oil economy. The combustion chamber and the silencer are much cleaner, there’s very little smoke from the exhaust, and tuning the motor is easy. Since the first TPI, there have been several reflashes made available. They are becoming increasingly less relevant, but if you do decide you need to reconfigure the mapping, it can be done with a laptop. Almost anyone will concede that this beats dealing with little pieces of brass.

INJECT AND REFLECT
None of those advantages matter if the bike doesn’t run well. Thankfully, it does. In absolute horsepower output, there’s no real difference between the new bike and the old, carbureted one. The power delivery is just different. The motor has a more linear hit and doesn’t quite rev as high. It’s still a very snappy bike, especially if you’re a rider who is used to modern four-strokes. Any two-stroke has a shorter, more explosive powerband than a current four-stroke. In a racing situation, you have to learn to deal with that by developing better throttle control and shifting more often. The good news is that the TX300i probably has the smoothest, most easy-going power delivery of any currently made two-stroke. The bad news is that it will be pitted against 450cc four-strokes, which have more power and longer, more forgiving powerbands.

The trick is to choose your battleground. Going up against a 450 on a rough, high-speed course is giving away all your advantages. Where the 300 shines is in lower-speed, more technical situations. It is absolute magic on tight trails with rocks, roots and ruts. At super-low rpm, far from the peak power zone, the motor pulls evenly and predictably. It won’t stall unless you dare it to. In simple terms, the TX300i has a big advantage over 450 four-strokes in first and second gear. Above that, it’s advantage four-stroke.

The greatest aspect of the TX300 is that it’s one of the few bikes that’s both an excellent race bike and a great trail bike. On the trail, its low-rpm manners make it suitable for casual rides where ultimate speed isn’t a factor. But, when the time is right, it has the power and the responsiveness to be a legitimate racer. The biggest difference between the TX300 and the TE300 trail bike (the one with the headlight) is suspension. The TX’s air fork is just like the motocross model’s, aside from valving. The TE has the Xplor 48 fork and is much softer. It’s made for comfort, not racing. The TX, on the other hand, can be taken anywhere and it will work. That’s the one undeniable advantage of an air fork. It can be dialed in for virtually any type of terrain. Having said that, we have to admit that it still isn’t the most comfortable fork in the world. Even with reduced air pressure for trail riding, the Xact fork is a little harsh. On the other end of the spectrum, it’s a little busy when set up for racing. No suspension can be all  things to all riders, but the WP air fork can at least do most things for most riders.

THINGS TO KNOW
The TX300i lost its kickstarter this year. There’s still a little hole where you could put one if you are really determined, but almost no one does that. It starts quickly and easily, but it is a little coldblooded. The bike carries enough fuel for an hour of full-throttle racing on a track or 60 miles of fast trail riding. When it gets low, there’s no reserve petcock, but there is a little light that comes on. There’s another light for low oil, which comes on after about four tanks of gas, and another diagnostics light. It also has two maps available in the stock ECU, and they make a noticeable difference. You should try them both. For racing, oddly enough, most riders prefer the milder power delivery of map two.

This is one of those bikes that prompts strong opinions. For one thing, any two-stroke does that. For another, it’s something new and different. Once you get past all that and just ride, however, one universal truth comes into focus. The TX300i is a truly fun bike to ride. It isn’t perfect,  but it doesn’t have to be. It started out as one of the greatest bikes you can buy, and now it’s better. That’s what matters the most. 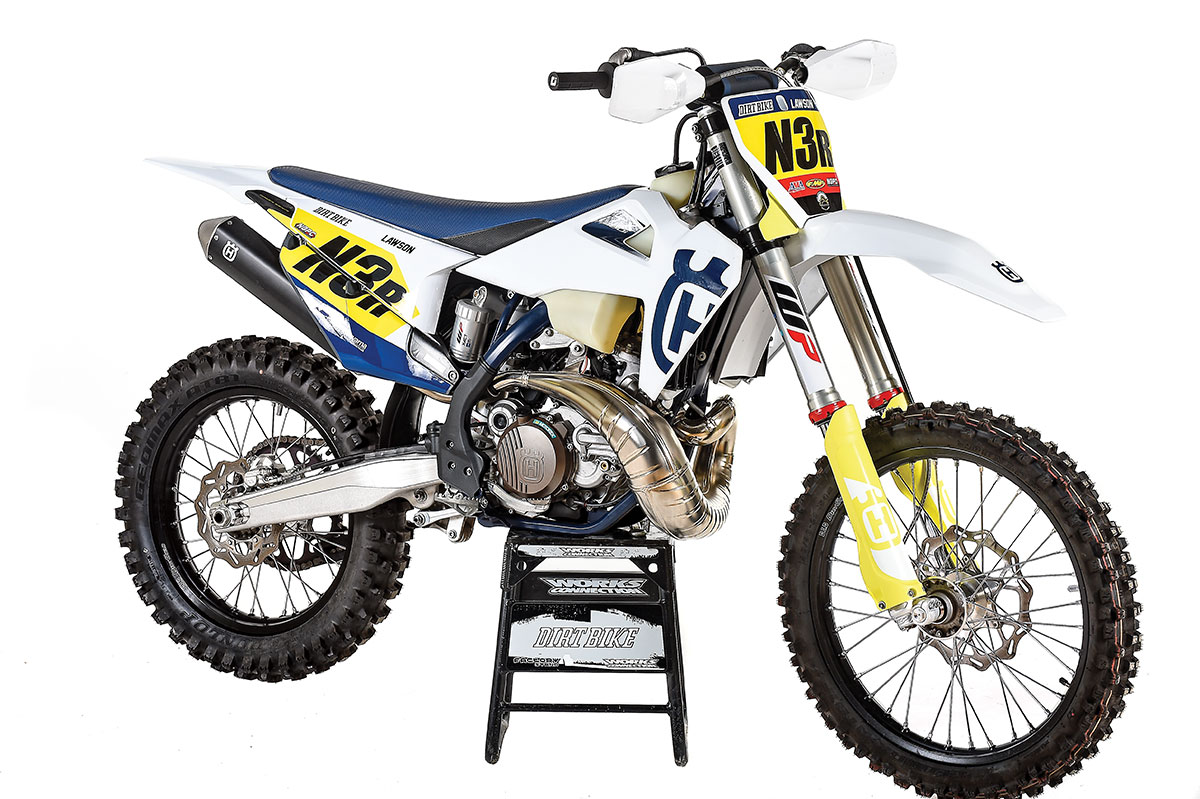