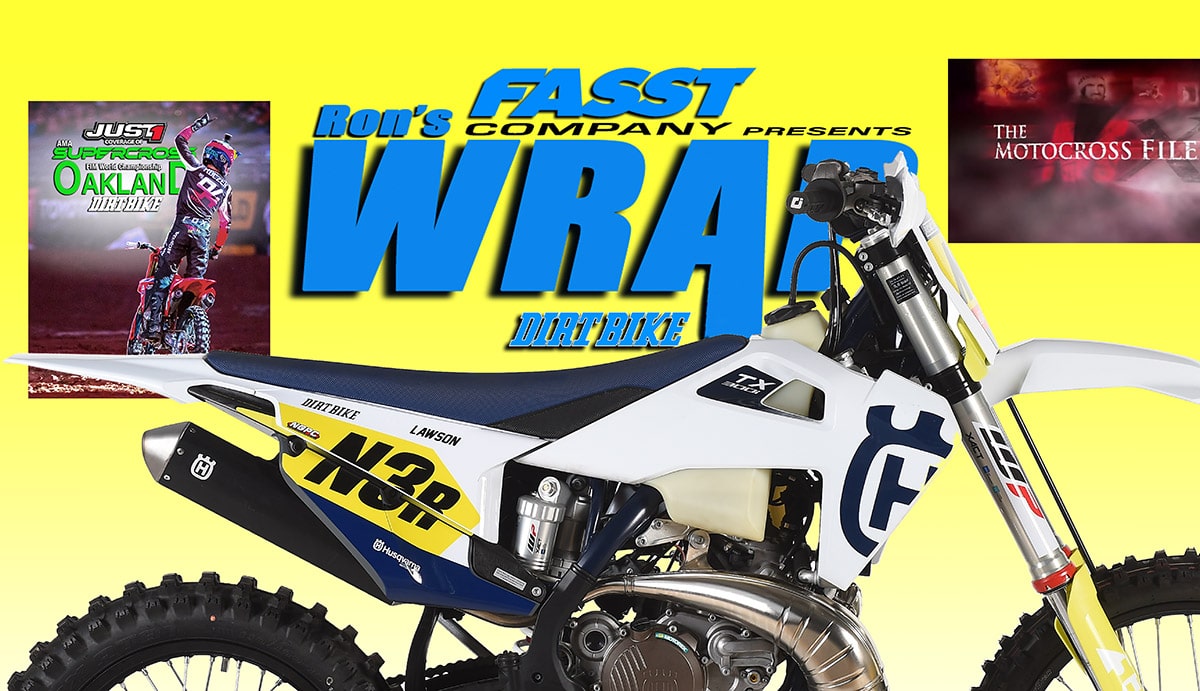 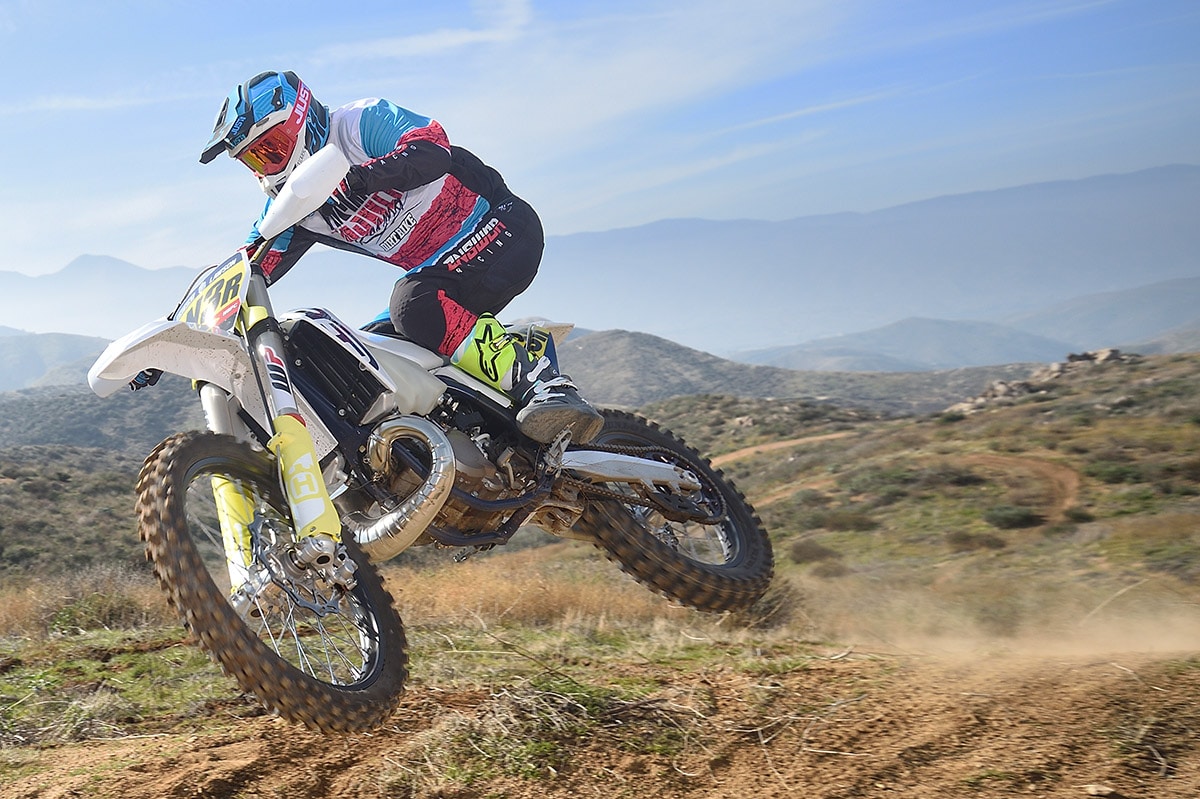 For 2020, Husqvarna expanded its use of TPI two-stroke fuel injection  to include the TX300. This is significant because it only came on Husky’s trail bikes last year, and the TX is considered a fully committed race bike. Since the technology first arrived two-years ago, the bugs have gotten worked out until the company is finally ready to take it racing. 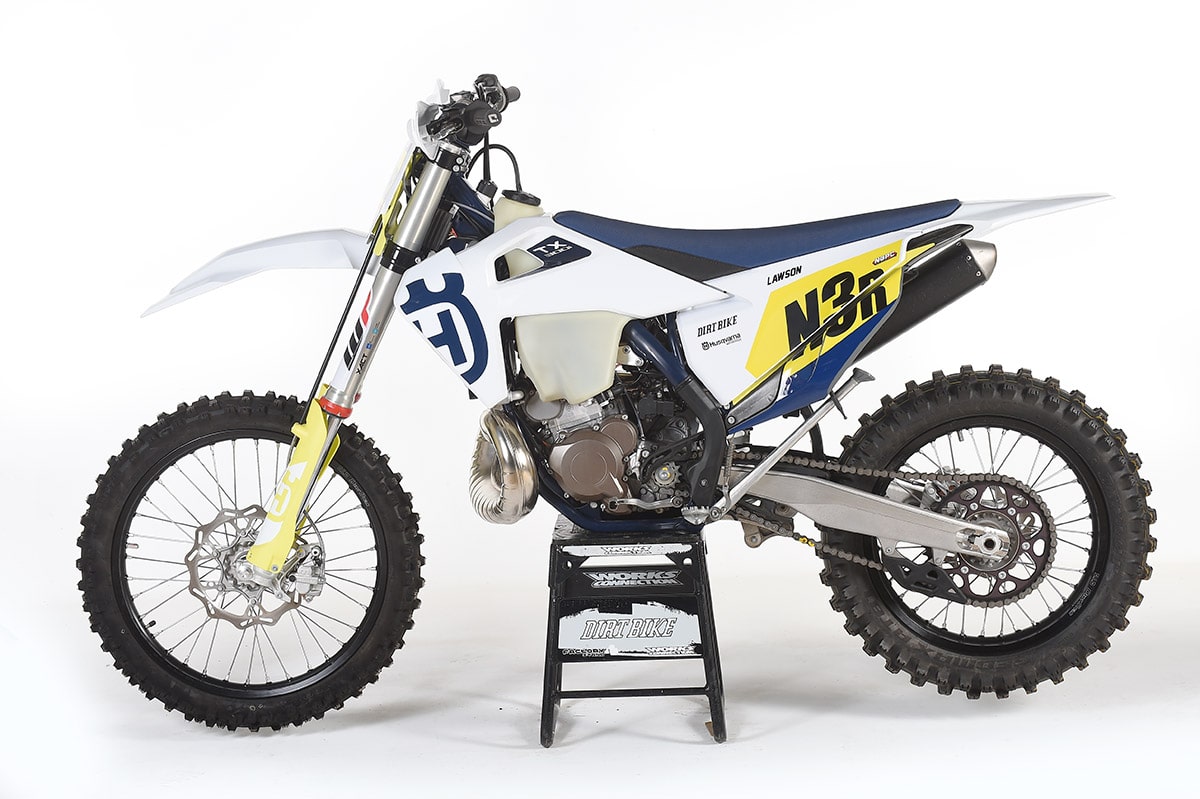 We got our 2020 TX300 test bike a month ago, and I’ve been riding it since then. That includes the first race of the 2020 National Grand Prix Championship at Adelanto. The only modification I did before taking it to the race was the installation of a Scott’s Steering Stabilizer. That’s usually necessary for high-speed races, but the course was tighter this year, and the bike would have been fine without it. 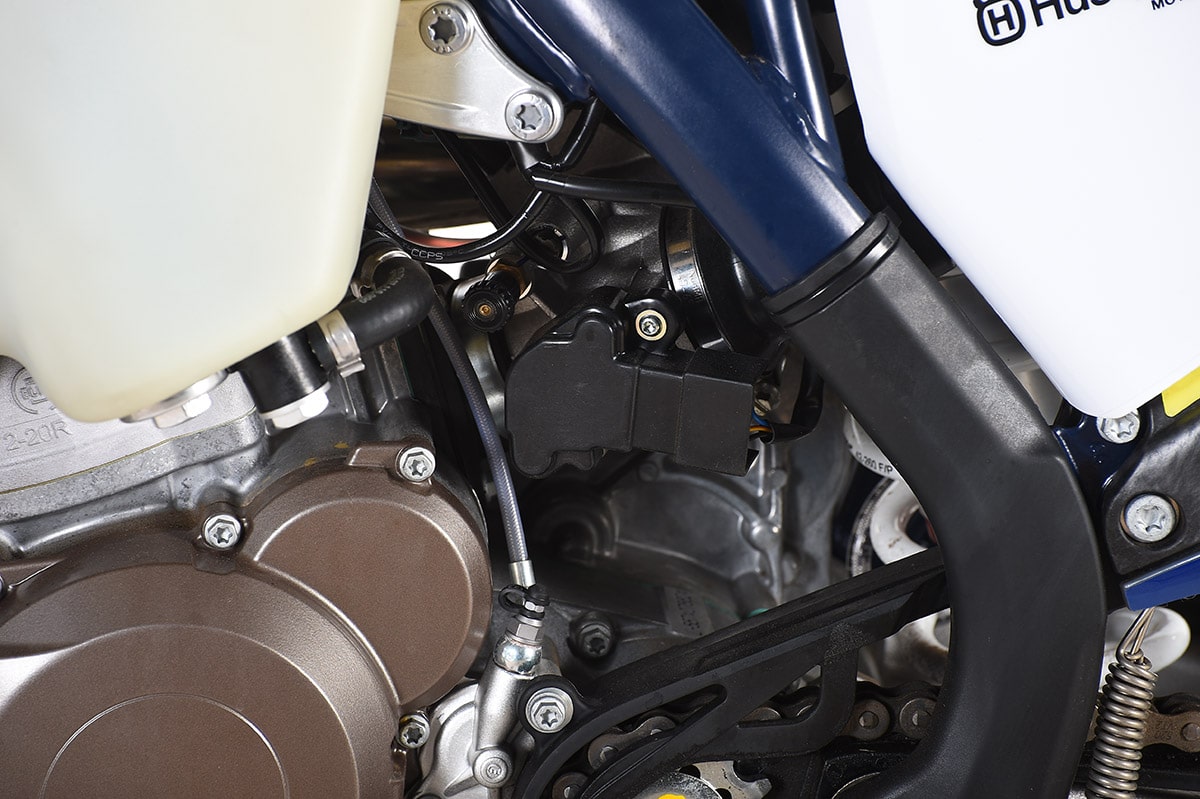 The most important thing I learned is that the TPI fuel injection is pretty much invisible. In fact, I kept forgetting about it.  The new TX doesn’t have the hesitation that we experienced on the first versions, but it still feels a little lean down low. For the record, so did last year’s TX300, which used a Mikuni carburetor. It would be fun to ride the new TX back to back with the previous, carbureted TX, but I’m pretty sure I know how it would play out. The fuel-injected version is smoother and peaks earlier. It probably doesn’t rev quite as high, but horsepower output is essentially the same. The 2020 TX300 weighs 223 pounds. We’ve previously established that injection adds about 6 pounds.

The greatest aspect of the TX300 hasn’t changed at all. It’s still one of the few bikes that’s both an excellent race bike and a great trail bike. On the trail, the fact that it will pull from idle and never stall makes it better than virtually any four-stroke made. On the track, it’s fast and light. The biggest difference between the TX300 and the TE300 (the one with the headlight) is suspension, The TX has the WP XACT AER48 air fork, just like the motocross models, aside from valving. The TE has the XPLOR 48 fork and is much softer. At Adelanto, the stock TX suspension was good but not great. The course was super rough and the bike was busy. Part of this is typical of two-strokes when you get them on a track at speed. As much as I love two-strokes in general and the TX specifically, I have to concede that the rougher the track, the bigger the disadvantage to four-strokes. In power, I never felt it was a disadvantage to the 450s, but I did have a hard time being as smooth as I would like. In general, I would get on the gas a little too hard and a little too late, mostly waiting for the bike to settle down. 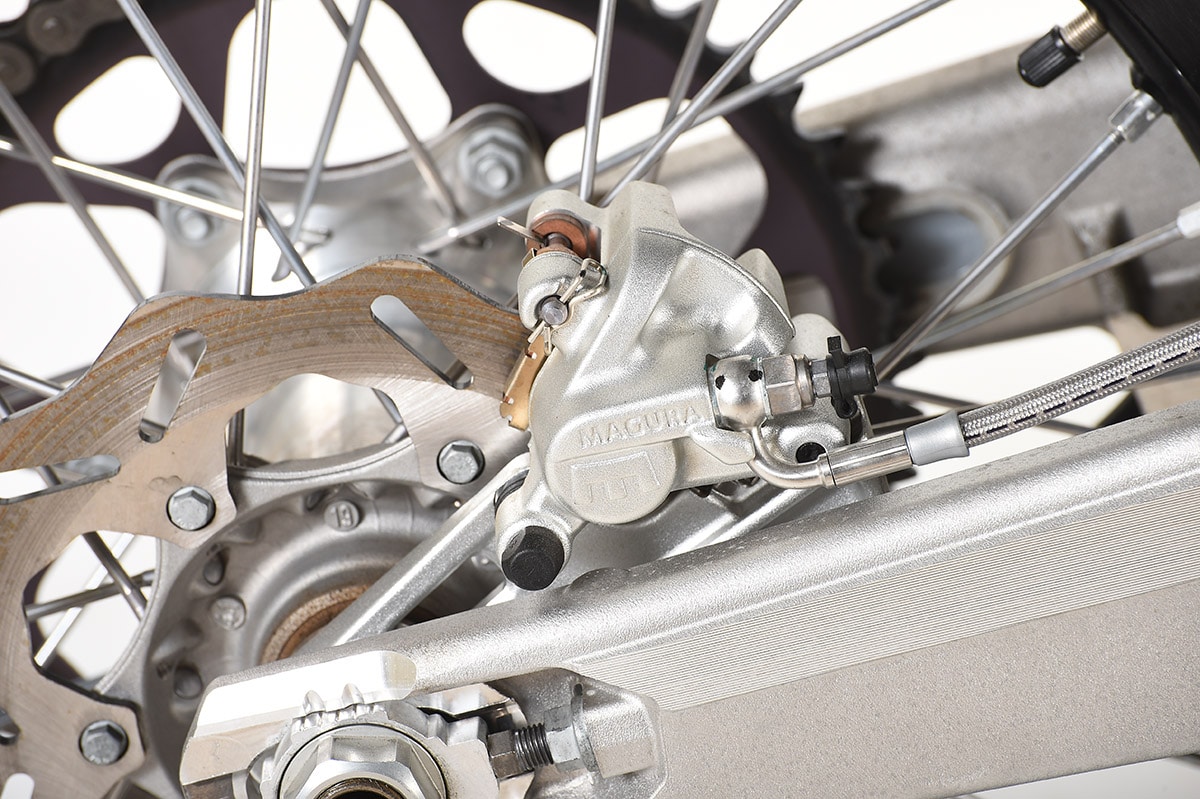 Still, there are very few bikes with a skill-set this wide. Those same 450s that gave me fits on the track were completely out of their element in the EnduroCross section–if only it were longer than one brief straight. I still finished about where I finish, though. Some things, sadly, don’t change. The full test will appear in the May, 2020 print edition of Dirt Bike.

I had the opportunity to talk with Andrew Short after he returned from Saudi Arabia this week. For the most part, he was upbeat about the experience despite some dark moments. Here’s what he said:

Dirt Bike: How did you get involved with rally?
Andrew Short: I got involved because it looked like a good time, it was different and I love trail riding. I was working for Honda and I wanted to try the Sonora Rally down south. I went there for vacation and learn something new and have an adventure.

DB: How did the Rockstar Husqvarna team come into the picture?
AS: My team manager Pela Renet is a past off-road champion. He rode on a rally team and was injured at the Aatacama rally in Chile. I got in touch with the team and it came together really quickly. The next thing I knew I was off to Morocco. I was at a point where I didn’t know what was next. I’m very thankful that the opportunity arose. Now I get to work with Pala who I replaced.

DB: You won the Rally du Moroc last year. Did that take you by surprise?
AS: I think it took everyone by surprise. It was my third time at that event and I had come a long way. This time I was well prepared. The round before that at Silkway I showed up and had some success. I finished second overall and Moroc is the last race before Dakar and everyone shows up ready to go. For me, I knew I could do well, but to think you can win a rally when you haven’t won one before is optimism. But I rode well and had good navigation and also I had fun.It was a good build-up forDakar and gave me a lot of confidence.

DB: How do you like the navigation aspect?
AS: That’s half the fun. In MX, you work on your technique, but in rally, that’s just one small part of it. You have to think, be smart and understand many different elements. These are things I really enjoy. Navigation is really tough, but what I really underestimated is learning how to read the desert. That’s something I’m still working on. Motocross and supercross guys wouldn’t understand how hard it is. It’s second nature for kids who grew up in the desert, I have a real appreciation for it now.

DB: How much raw speed do you have in reserve?
AS: I’m at my limit almost all the time. Sometimes you have to have slow down your riding speed to check the roadbook, but your brain is still working at a high rate, so you’re at a level where its 100 percent. Sometimes it’s all about the terrain, but other times it’s half about  riding and half about navigation.

DB: This year, you lost some time in the initial stages. What happened?.
AS: For me, my chances were out the window on day two. I had a blown fork seal and I was riding a little too fast, and I saw the danger ahead and couldn’t get stopped. It was my fault for  not backing it down. It was the Supermarathon phase where you have only 10 minutes to work on your bike at the end of the day. So when I crashed I smashed my towner. The tower is what holds the road book and the instruments. So when I got to the parc ferme, they were not going to let me race any more like that. I could quit or take a penalty to fix my bike. The next day, obviously I took the penalty. I rolled across the start line and I brought parts, which was against the rules, and that’s why I got the penalty. This year it wasn’t my race. 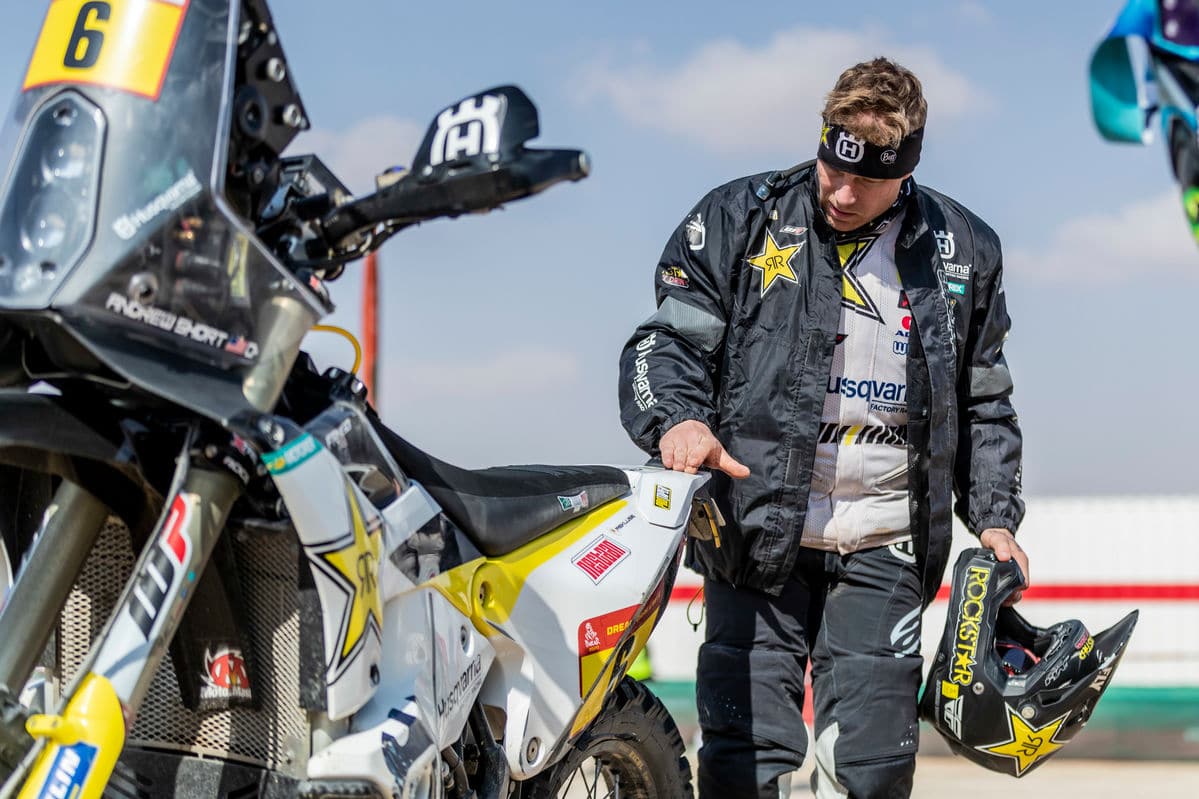 DB: What happened with Toby Price and his wheel?
AS: On day six I came up on Toby Price who needed a wheel, and my race was already over, so I decided to give him mine. It’s a thing where I hope it comes back around to me. If the tables were turned and I was minutes from the lead and someone had the opportunity to help, I would hope he would do the right thing as well. This is how rally works. I made a quick decision.

DB: After Paulo Goncalves’s accident, could you set that aside and concentrate on the task at hand?
AS: No. It was something I thought about every day after that. Especially because the terrain in the first half was nice and beautiful, and the road book had a nice mix of technical riding. The second week had a lot of fast, sandy valleys that were all off-piste. You’re not on a road just on a compass heading so they can’t mark all the dangers. This is how Paulo got hurt and how the majority of the second week was. It was hard to get that out of my head.  This was a difficult part of the race and makes you think about the risks you’re taking.

DB: Now that you’re a rally veteran, what did you think of Saudi Arabia?
AS: Going in I had a lot of questions. But the race in general was much better than I thought; the terrain was a nice nice mix of sandy, technical riding. I really enjoyed that. The second week I didn’t enjoy as much. What shocked me the most was how many Americans there were, working in the towns and airports, and now friendly the people were. I felt like our country has a lot invested over there. It was much different from what the news conveys. 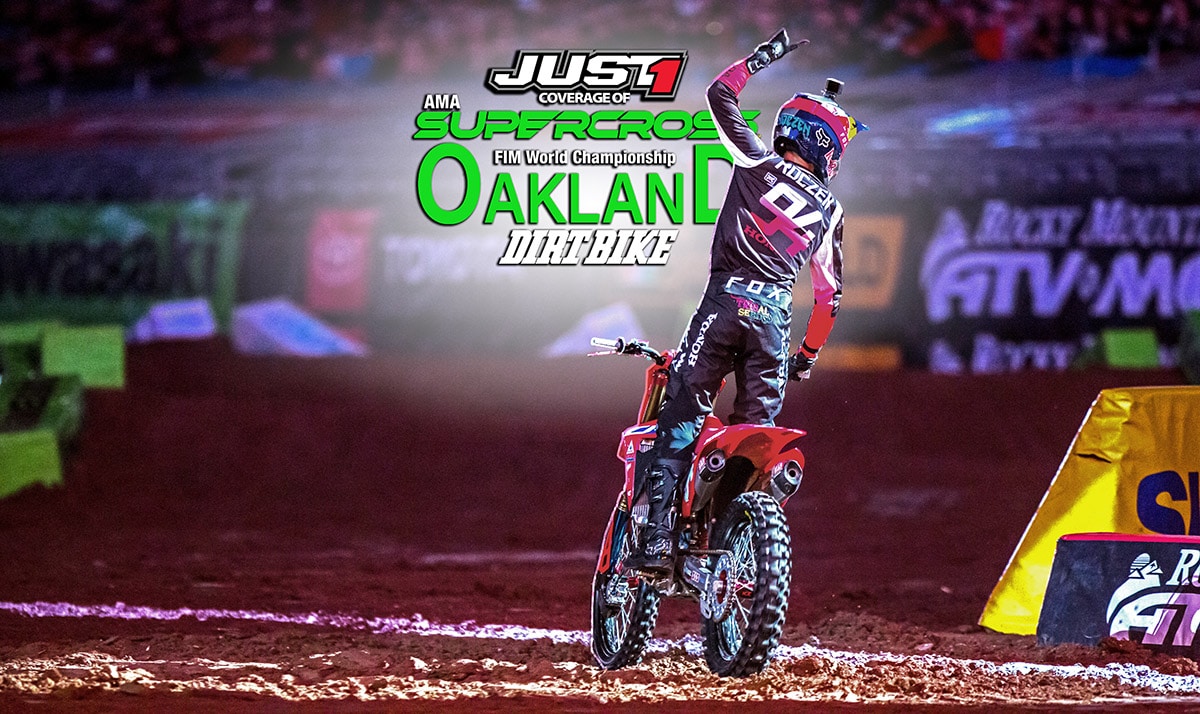 This weekend, the fifth round of the Monster Energy Supercross visits the Oakland Coliseum. All the results will be posted right here, so if you aren’t near a TV, you can still can get the facts as they happen. Click here for full 2020 Supercross results. Back in 1979, Oakland was the site of the infamous Weinert paddle tire controversy. In case you weren’t yet alive, this was when the track was almost entirely sand and the Jammer won using a full paddle. Check out the clip from the Motocross Files below. 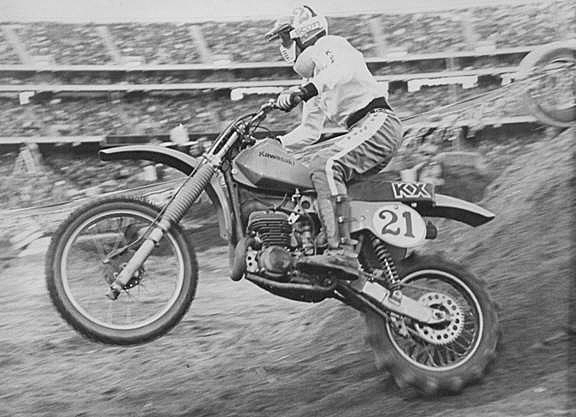 Round two of the NGPC is this weekend at Taft, California. Normally, the races are a month apart, but there’s a bit of a log jam at the start of the new year, so February will have two races in this series, and the one in January was only three weeks ago. Busy times. 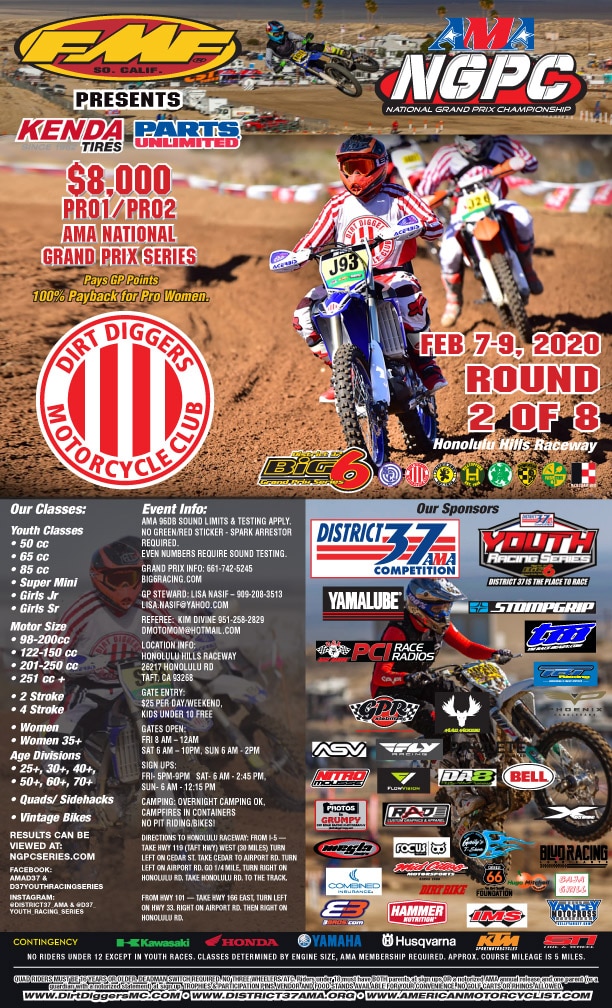