HUSQVARNA TX300 PROJECT: BEHIND THE BUILD 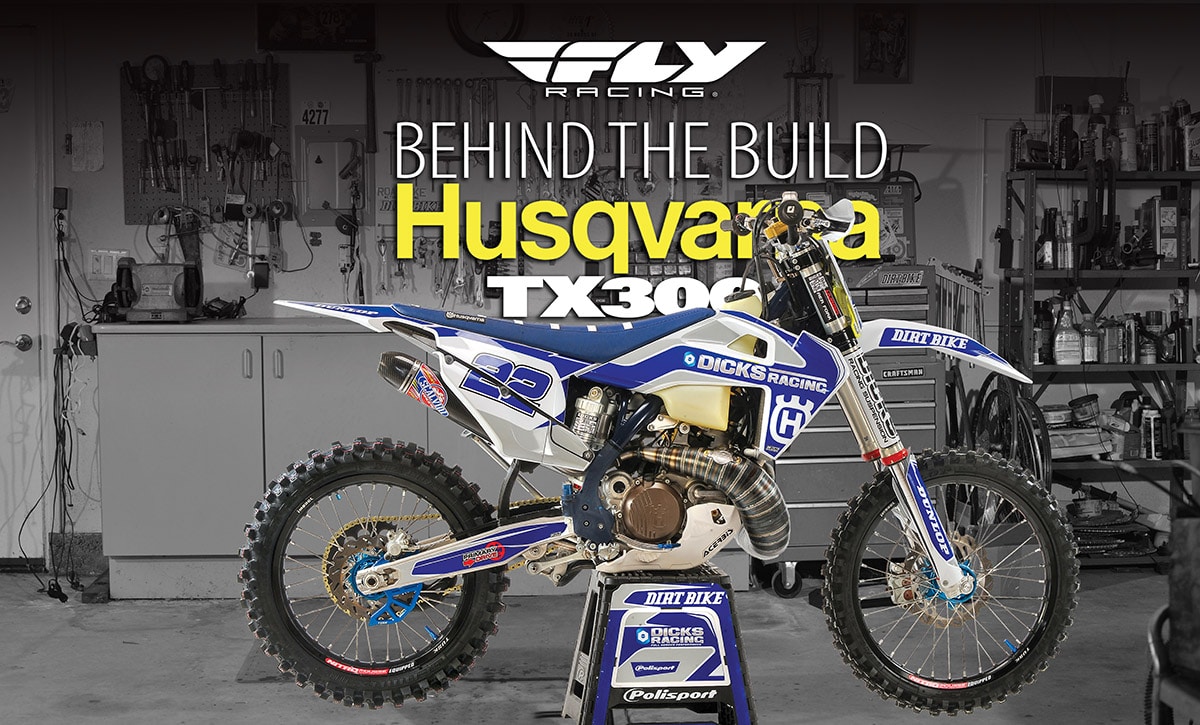 It’s common knowledge that the Husqvarna TX300i is an advanced off-road two-stroke machine. It targets faster off-road, GPs, desert racing and GNCC terrain where stiffer suspension is required for the rider who charges the carnage with a smile. Dick Wilk of Dicks Racing’s goal with his personal ’22 TX300i was quite selfish; he wanted make it more versatile for more technical/cobby terrain and more versatile for the rider who isn’t a hard-charging flat belly. Dicks Racing feels that the TX300i makes good juice overall but definitely hums with a bigger appetite with some focused mods. Dick did not want to break the bank with costly bolt-ons, preferring to work within the system to find gains that would make every pilot grin.

In the suspension department, good changes were made to the 2021 model, and nothing changed for 2022. The WP XACT air fork that comes on the TX offers good adjustability (via regulating the air pressure) and works well in environments where the terrain is fast and the obstacles are large. It’s lightweight and offers good progression. Riders who play in rocky terrain, trail hack and roots will be less enthused. The problem is that the 140-plus psi takes too much force to make it move initially, causing harshness and a ramping-up effect. What starts at 140 psi goes higher as it is compressed through the stroke.

Dick’s answer to this dilemma is the Hybrid AER system. The entire damping cartridge (on the right fork) is replaced with one that accepts a spring. By reducing the load put on the AER fork, pressure can be reduced from 140-plus psi down to 50–60 psi. This eliminates the initial stiffness yet maintains the good traits listed above. The damping cartridge is tuned to match the spring rate and AER pressure, as well as the terrain. The result is plush initial action with controlled movement through the stroke, capped off with tremendous bottoming resistance. It’s super versatile as well and can be adjusted via AER pressure and compression/rebound clickers.

In the rear, Dicks Racing feels that the stock shock is quite good, balanced and versatile for riders weighing in at 150–170 pounds with gear. This means that your street-clothes weight is in the 135–155-pound range, and here the stock spring rate is fine. The problem is with riders who tote a bit more luggage, weighing 185 pounds or more. For this project, Dick used a 4.8 N/m spring that’s good for 190–210-pound total weight. That is three full sizes stiffer than stock. OEM springs are offered in 1.5 size increments to increase the range of each spring. Given that, Dick has found that the stock rebound valving can barely control the recoil effect of the stock spring, let alone one three sizes stiffer. The shock must be re-valved to work properly. By matching the rebound damping to the spring being used, the adjuster can be utilized in the middle of its range, giving room to adjust both faster and slower, depending on conditions. A stiffer spring is also harder to get moving than the stock spring. To combat this, the compression valving is altered to match the spring and the terrain.

Dicks Racing has explored the outer limits of the 300’s performance abilities, which are expensive and extensive. This time, the goal was to keep it simple. Dick’s analysis of the stock machine was pretty much the same as last year’s model—good bottom-end power, flat through the middle, and then it has a hard but short top-end pull. Just when you get excited, it goes linear. In stock form, you are forced to short-shift and stay in the bottom part of the powerband. Outside of that, you are waiting for it to come alive. When it finally does, it’s short-lived. His goal was to improve torque, fill in the midrange and extend the top-end power.

The solution required much testing and a three-pronged approach. The first thing he did was to improve the throttle body. Dick has always felt that fuel-injected bikes, whether two- or four-stroke, that use throttle bodies do a much better job creating unwanted turbulence than they do metering fuel/air. In this case, it’s only air, since the injectors on the TX300i are located in the rear transfer ports of the cylinder. The turbulence is caused by a round plate that pivots in the middle called the butterfly valve. At partial throttle openings, it acts as a wall for air to run into, causing a disruption in the intake tract. To help reduce this, Thunder Products dual torque wings are installed in front of and behind the valve to direct the air in a straight path towards the engine. The wings themselves have four uniquely shaped fins, creating four pressure-balanced quadrants for air to travel through, which leads to higher air speeds and improved torque, especially below half throttle.

The next modification was made to the cylinder head. Dicks Racing’s proprietary Hi-Torque head mods feature three pairs of channels (torque grooves) that aim compressed air/fuel directly at each other to completely atomize the charge right before it is ignited. This process improves torque across the rpm range while reducing the risk of detonation. In addition to the channels, the surface is machined to make up for the material removed during the process. At this point, the compression ratio is then matched to the octane of the fuel being used and the elevation. For this test, 91 octane was utilized.

After steps one and two, the crucial and final piece of the puzzle was matching the air/fuel/timing/lubrication calibrations to work with the changes made to the engine. This was the trickiest part for Dick. Up to this point, the only option was to replace the ECU with an aftermarket unit and attempt to tune it yourself. Dicks Racing researched this extensively and ultimately found a computer genius who cracked the code to gain entry into the stock ECU. Suddenly, they could tune and adjust the settings to work with their engine modifications. Air/fuel ratios were altered, ignition timing was optimized and even the oiling ratio was changed to improve reliability. Finally a Scalvini exhaust system was installed.

Suspension: Both ends worked wonderfully together for a well-balanced machine. There was no stink-bug effect or vice versa. The fork action was ultra-plush, especially on breaking bumps and hacked-out chop. Still, there was amazing holdup on the forks, even with such a plush nature. This balance between plushness and great hold-up to plow through whoops and rough high-speed terrain was a strong improvement over stock.

The shock was equally impressive and paired well with the forks. The bike felt balanced and resisted excessive kicking. There was no wallowy feeling at higher speeds. It tracked well and was quite savvy in technical terrain. Both fore and aft offered considerable plushness in the rocks.

Engine: The TPI machines are a bit dull in stock form, and most of the mods to boost the performance are hard on the wallet. Everything Dicks Racing did here made great things happen. The bottom power was immediate, torquey and much meatier than stock. The capacity to lug this machine was impressive, yet the bike would bark and light up when needed—something the stock bike lacked. On hill-climbs, we welcomed the increased muscle. There was zero detonation, and it ran quite cool, even under substantial loads.

One final note: These modifications require you to send in your parts to get them tuned. We have installed the dual torque wings at home, though it seems a bit spooky since you need to cut small grooves into your throttle body that position the wings. It’s not that difficult, but you might want to send your throttle body to Dicks, since they have it down to a science. One of our editors who rides a TE300i packed up everything the day after we tested and sent his bike’s head, throttle body, ECU, fork and shock to Dicks Racing. That’s how impressed he was!

2022 WORCS ROUND 4: VIDEO HIGHLIGHTS FROM TAFT