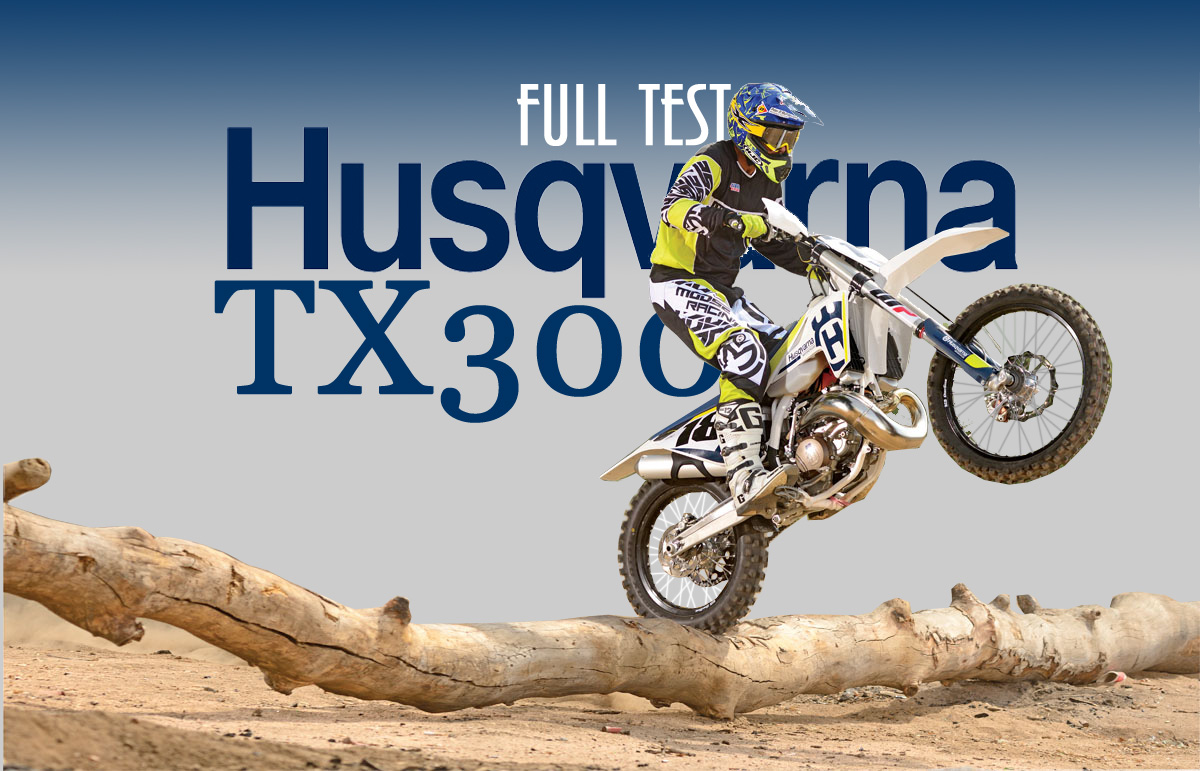 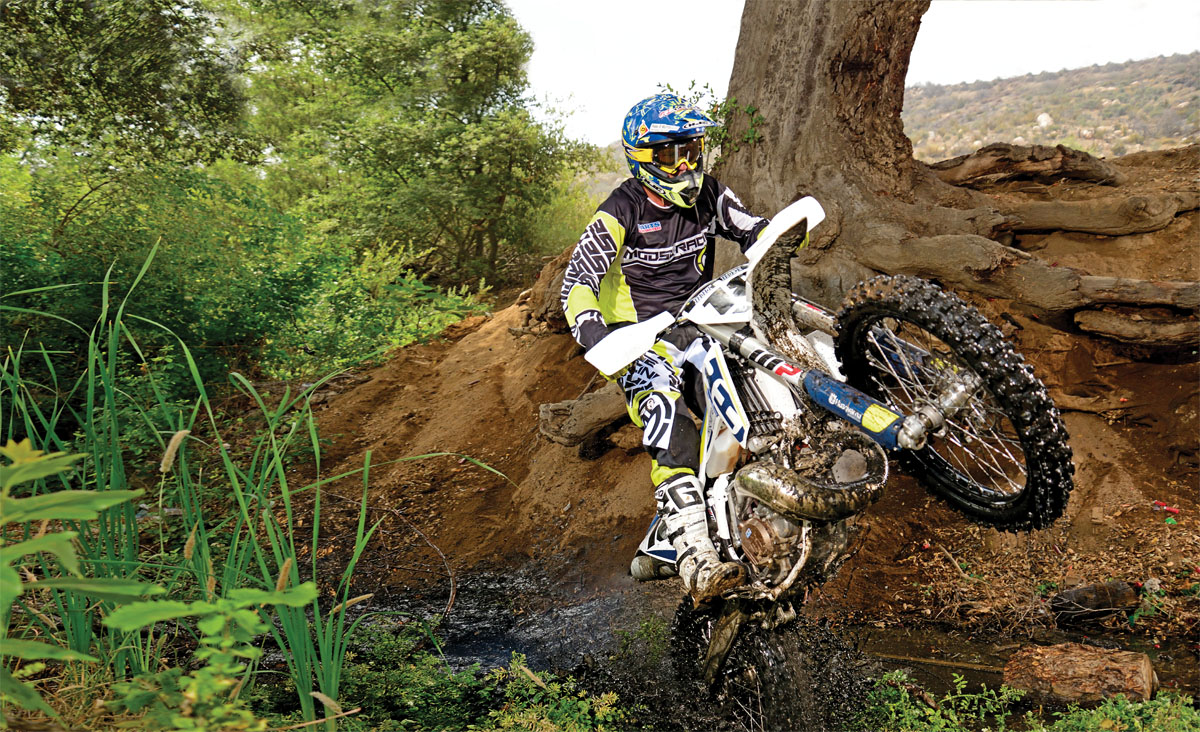 With the arrival of the 2017 Husqvarna TX300 two-stroke, everything changes. This is the first of what will become a mainstay for Husqvarna for years to come. It’s also the first of a new line of X bikes that are designed for off-road competition. And, most important of all, it’s a brand-new two-stroke. That’s headline news by itself.
First of all, here’s what the TX300 is and isn’t. It is an electric-start two-stroke with a case-reed motor. It has a six-speed transmission with fairly close ratios. It’s not fuel-injected; in fact, it uses a 38mm Mikuni TMX carburetor. Why no injection? Because it still wouldn’t pass EPA or CARB emission tests as an off-road vehicle. The only two-strokes capable of that are massive direct-injection designs that require extreme fuel pressure, and that would defeat the whole point of having a two-stroke in the first place. In Europe, there will be a fuel-injected version of this bike, but from what we understand, it will be dumbed down to less than 20 horsepower. Be happy we have what we have. Thus, the new Husky 300 follows much the same path as the old Husky 300; it’s a closed-course, competition off-road bike. It’s just lighter, faster and more modern. 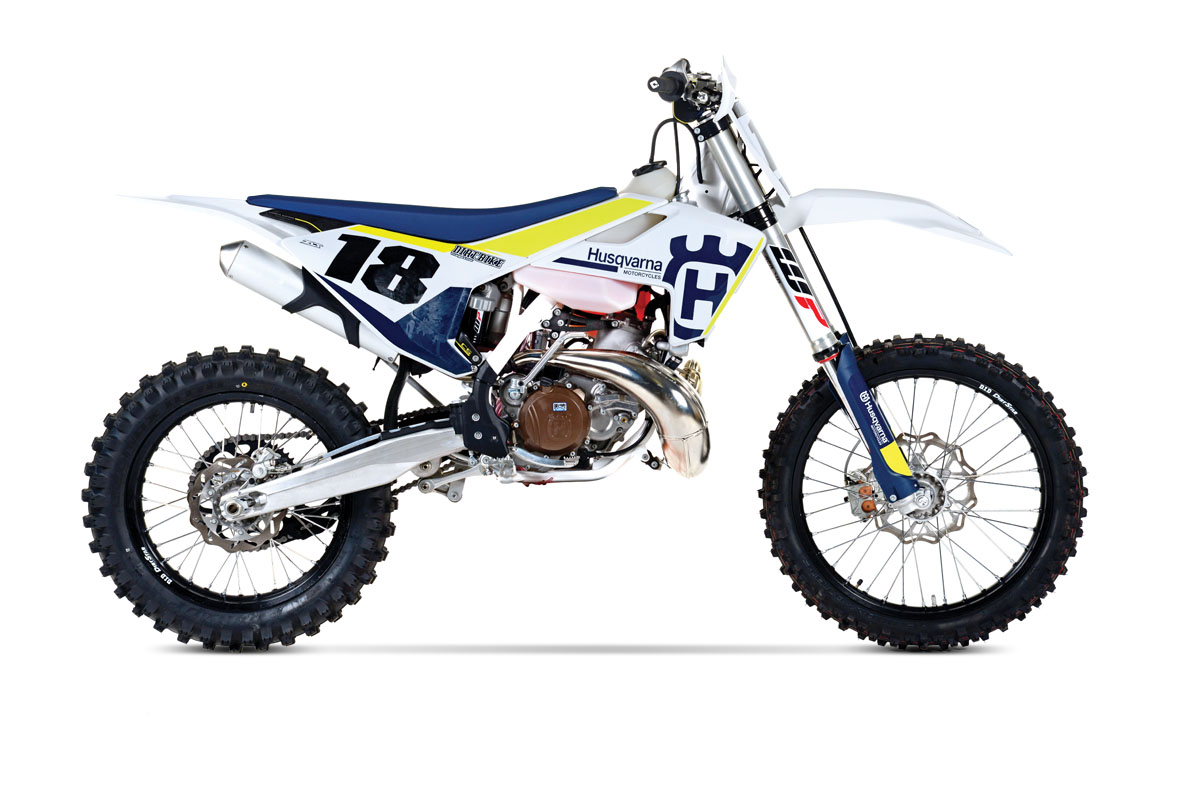 BREAD AND BUTTER
Husqvarnas are manufactured by KTM these days, and company officials report that this motor platform will be manufactured in very big numbers for 2017. There will be more of these than the 350 four-stroke, the 450 four-stroke or the 250 four-stroke. Of course, when they say motor “platform,” they’re talking about several different configurations—some 250cc, some 300cc, some MX and some off-road. That’s okay; we’re still happy. It means that KTM and Husqvarna are committed to the two-stroke market in a big way.
At first glance, you might not see much difference between this motor and the previous 300, but the electric starter is hidden under the cases, and the whole motor has a slightly different shape. Right behind the cylinder there’s a new counterbalancer designed to quell vibrations. Even with the extra parts, the motor is lighter than the one it replaces. The power-valve mechanism is similar to the previous one and has a fair amount of adjustability. There’s an external preload adjuster that controls when the valve opens and a separate spring that controls how quickly the valve opens. It all goes into the mix of how you can tune the power delivery. Another big difference is the switch to a Mikuni carburetor from the Keihin of previous years.
As for the chassis, it’s very similar to the current four-stroke motocross bike’s. Plus, the 300 gets the latest configuration of the WP AER 48 air fork, which is also used on the current motocross line. The fork has all the air pressure in the left leg and the damping functions in the right leg. In this way, it’s similar to the Showa SFF triple air fork. WP, however, uses only one air chamber rather than the inner, outer and balance chambers that Showa employs, and that makes the WP fork much simpler to set up. Standard air pressure is 9.6 bar (140 psi) for the off-road fork. The motocross version is 10.6. The fork alone is said to decrease overall vehicle weight by 3 pounds. On the fabulous Dirt Bike scale, tested to be accurate to within 0.003 gram, the new 300 is 220 pounds without fuel. The previous version was about 9 pounds heavier. We haven’t had the opportunity to weigh the new KTM version of this bike (the 300XC), but there are a number of differences that will affect that. The most notable one is a composite airbox/subframe employed on the Husky, whereas the KTM uses a more traditional aluminum subframe. 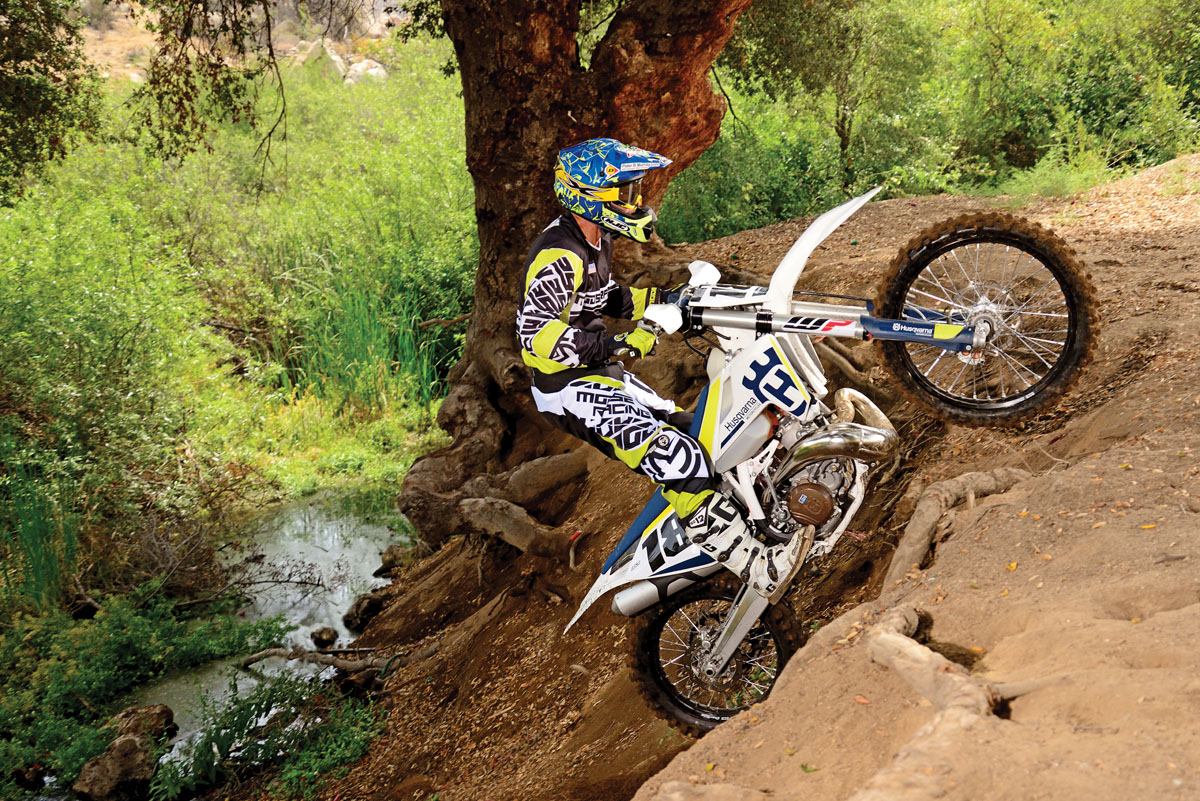 GOOD ENOUGH?
A lot is expected of this bike. The previous 300cc two-stroke Husky engine was worshiped by secret societies all over the world. It’s gone now, and if the replacement isn’t just as good, civilization could very well break down.
It’s good thing, then, that the new motor has power—lots of power. It has more low-end, more midrange and more top than the previous 300. When we say “previous 300,” we’re forced to make a cross-brand comparison. There was no bike that filled this description in the Husky line last year, only the more trail-oriented TE300. A more fitting comparison is the KTM 300XC, which, like the TX300, is designed for racing. The powerband is very aggressive. It hits hard down low and pulls through a very strong midrange. Top end is good, although it’s interesting to note that as more riders have become used to four-strokes, it’s common to hear that two-strokes “flatten out” on top. The 300 actually has decent over-rev, but if you’re used to a 14,000-rpm four-stroke, it seems to quit early. It’s also a little short-winded on top compared to the 250cc motocross version of the same two-stroke motor.
One characteristic that the old 300 motor was cherished for was its ability to run cleanly at crazy-low rpm, then pull itself back into the meat of the power without any mischief. The motor doesn’t cough or stall unless you do it on purpose. This is the part that makes two-stroke riders such fanatics. No four-stroke works this well at low rpm. Some come close, but they still aren’t this good.
As with any new bike, ours has some teething problems. Jetting is a little rough. With the needle in the middle (standard) position, it’s a little rich. One notch lower and it’s lean. There are extra jets in the kit that come with the bike, but we like another option. The number is FY4473, and it’s a half-step richer than stock. We lowered it to position two, effectively making the bike a half-step leaner than the standard setting. The bike ran cleanly but not perfectly. It would still surge when you pulled in the clutch and maybe even detonate at low rpm under a big load.
All this interacts with changes to the power valve that we also tested. We felt the bike was smoothest with the preload on the big spring turned counterclockwise about a full turn and with the yellow spring (medium) in play. You can test jetting/power-valve settings until your mind explodes, but the bottom line is that the 300 is still going to have that very strong, aggressive hit down low. 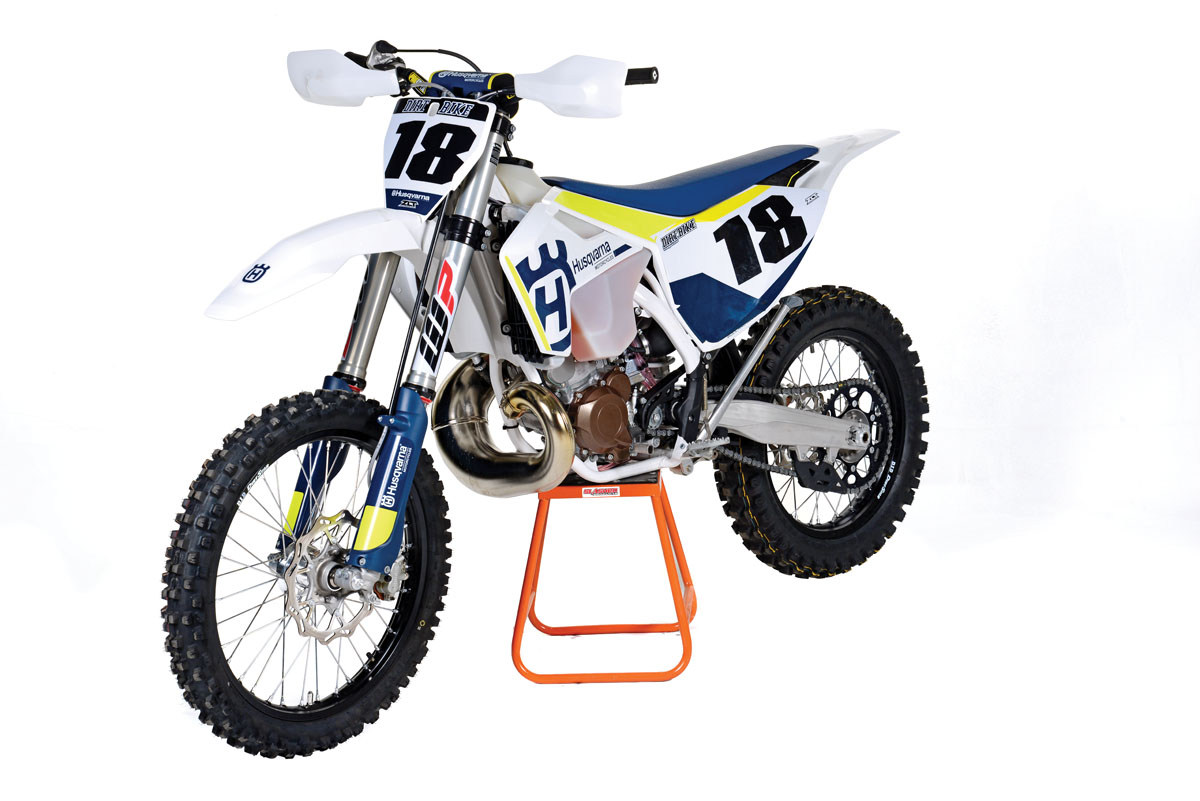 VERSATILE FILES
Make no mistake about it; this is a race bike. But, it has one great trait in common with the original 300 two-stroke motor. It’s incredibly versatile. You can keep it below the big power hit and ride it all day in mellow mode. It’s perfectly controllable and perfectly tractable. This is a bike you could use for racing in the morning and then for teaching beginners to ride in the afternoon. The power delivery is controllable and the weight is low. Then there’s the air fork, which can be made to work for anyone. This is the first time an air fork has been applied outside the motocross world. The perception is that off-road riders won’t warm to the need for increased vigilance to keep the pressure right. But, once again, this bike is a racer, and, in truth, we’ve all grown more comfortable with air. Compared to the 4CS fork that was on last year’s Husqvarnas, the AER 48 is a big improvement for aggressive riding. The older fork was always good for trail riding, but the one undeniable truth about air is that it can be made to work for any application. All you have to do is put in the time testing. Luckily, the standard settings are good on the FX. If you venture out on a motocross track, you’ll probably want to go up above 10 bar. As always, try the clickers first; you might be surprised.
The success of the TX300 is a foregone conclusion. It will be the bike to have in 2017, and with good reason. It’s everything the previous 300 was, only newer, lighter and stronger. If it’s too much, there’s the milder TE300, which is coming soon. There will be teething issues as the bike trickles into the rank and file of the off-road world, but that’s to be expected. Companies like JD Jetting will have the jetting sorted out. It’s a process we’ve seen before. We’re just not used to going through it with a two-stroke. It’s been a long time coming. 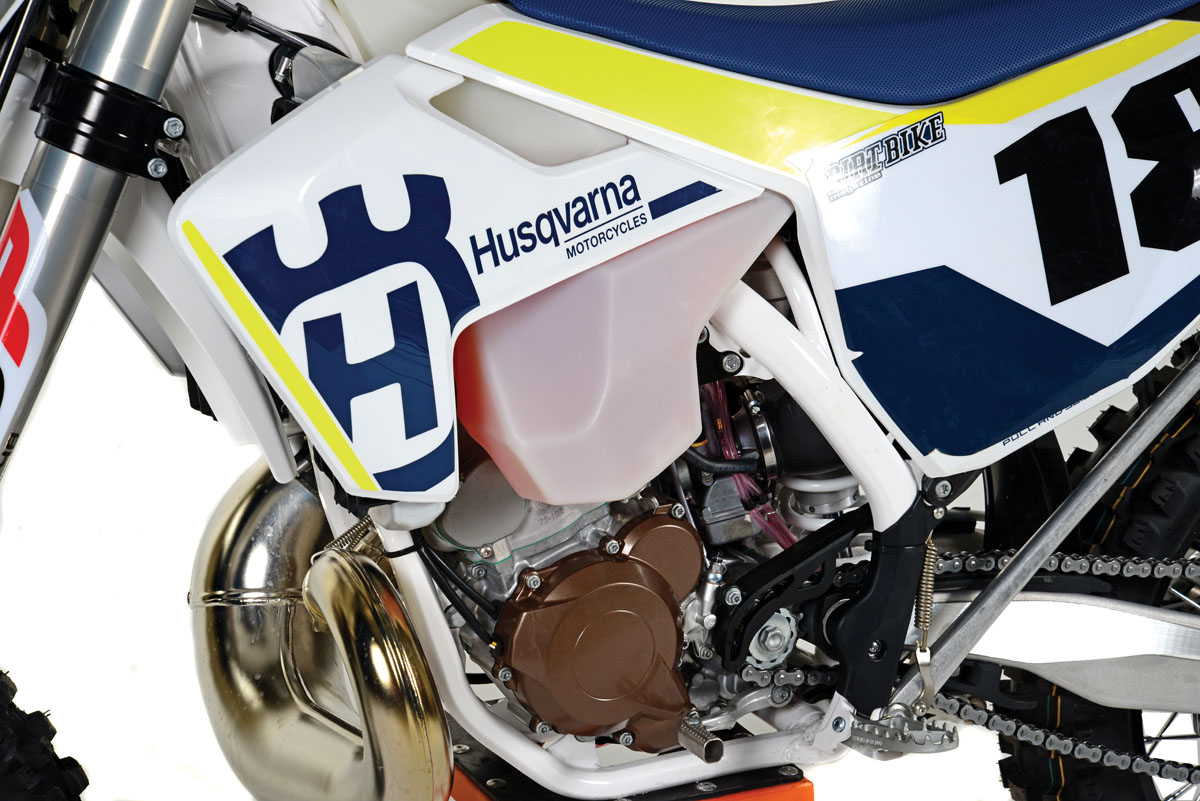 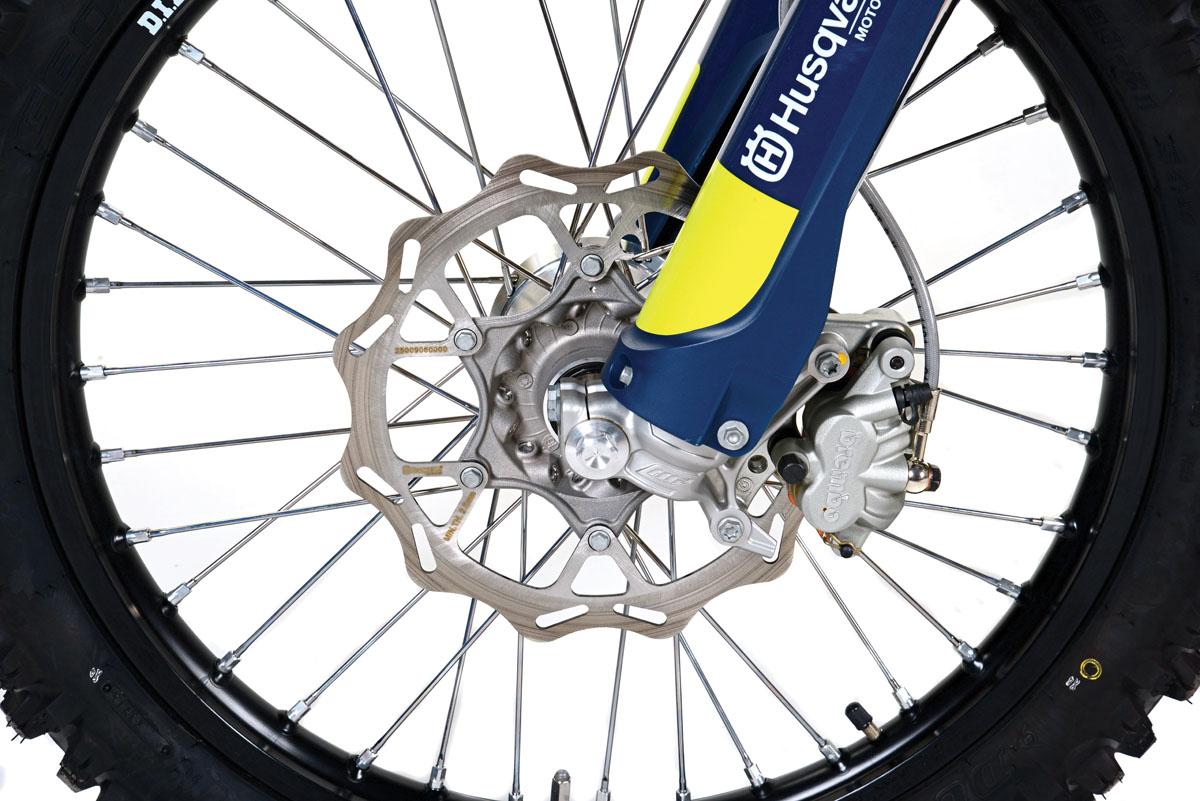