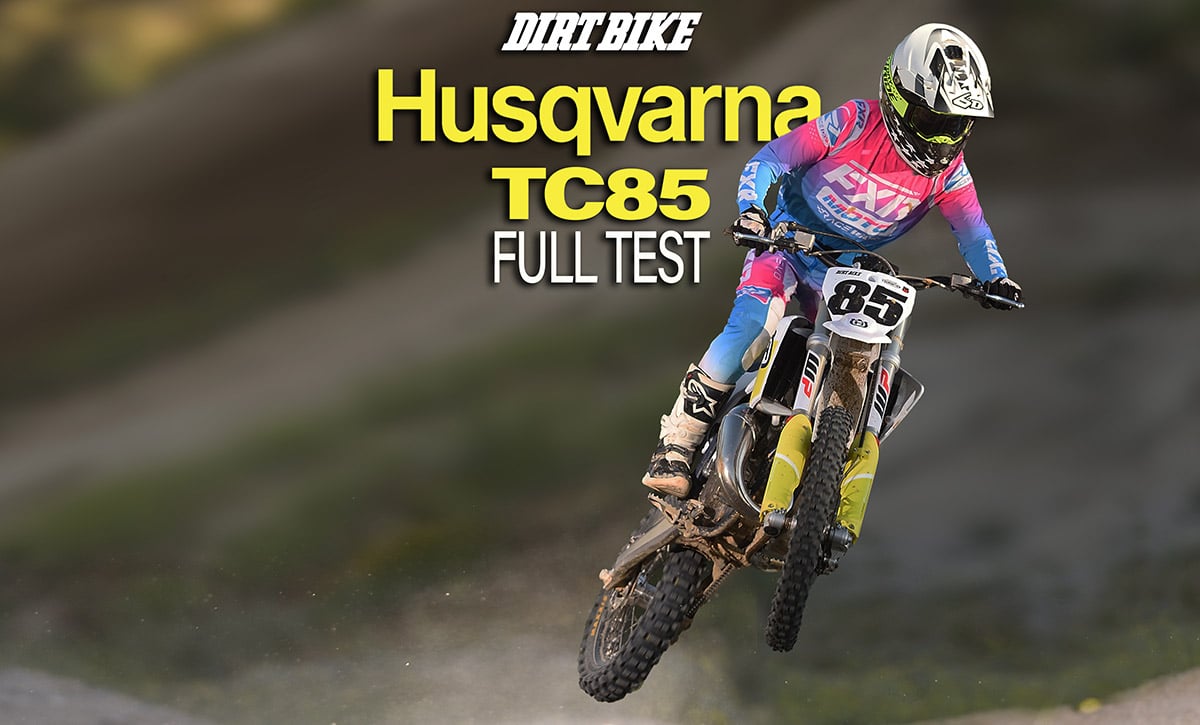 Husqvarna has put major resources behind the development of their TC85 platform, and their presence in the amateur racing scene speaks volumes. Okay, so it helps that when Husqvarna was acquired by the Pierer Mobility Group a few years back that its Austrian cousin—KTM—had just put the finishing touches on a vastly updated 85cc package designed almost exclusively for racing applications. Husqvarna, GasGas and KTM utilize virtually an identical 85cc platform, with the exception of key styling points.

Husqvarna’s TC85 is available in two different wheel-size combinations—the standard 17/14 and the larger 19/16 that is used for larger riders in what is known as the Super-Mini class. The wheels are similar to what we see on Husqvarna larger competition models featuring machined hubs and black D.I.D Dirt Star rims. Both wheel-size combinations utilize Maxxis tires. The main frame is chromoly steel, just like the larger race machines in the lineup, finished off in the signature Husqvarna blue, and has an aluminum subframe.

No surprise here, the suspension components are from WP. Up front, the WP AER 43 consists of a split fork design using a capsuled air spring in the left leg and oil-damping system in the right leg, and in the rear the WP Xplor PDS shock absorber is fitted to the TC85 with adjustable preload, compression and rebound. Braking components are made by Formula on both ends of the TC85 and also features a hydraulic clutch system that utilizes Formula components. Other notable items on the TC85 chassis include ODI lock-on grips, gripper seat, adjustable handlebar mounts, fat-bar-style handlebars and Husqvarna’s signature styling.

The TC85 engine has a cylinder that features a power-valve system that controls both the exhaust valve and the sub-exhaust port for improved power and torque. An adjuster screw allows the opening time of the power valve to be adjusted to suit rider preference and track conditions, and by changing between different power-valve springs, the rate at which the power valve opens can be dialed in even further.

On the bottom end and transmission, Husqvarna has done everything to keep overall weight to a minimum, including centralized mass and reduced vibration all for the sake of increased performance. The engine is fed by a 38mm flat-slide Mikuni TMX carburetor through a Moto Tassinari VForce 3 intake with carbon fiber reeds. The 2022 TC85 model also features an exhaust system tailor-made to the engine with a 50mm-shorter silencer design compared to the previous configuration, contributing to the mass-centralization theme.

WHAT IT ALL MEANS

Husqvarna has a strong racing influence, and it shows through in the TC85 with great handling and loads of power. With that being said, it does favor the more aggressive and larger rider on the starting line with its more spread-out cockpit and higher-revving powerband. A huge plus for us with the TC85 is the fact that there is no additional modifications needed when switching between the standard and larger wheel sizes; simply bolt on and go. This makes it very affordable when a rider is on the larger side of an 85cc machine but not quite ready to make the step up to a full-size race bike. The larger 19-inch front- and 16-inch rear-wheel combination gives the rider a little more height and some much needed additional time on the 85cc platform.

Like we mentioned before, the TC85 might be a little more difficult for less aggressive riders to keep in the meat of the powerband, forcing them to clutch it more often compared to other manufacturers’ 85cc machines, but if a rider can ride the TC85 where it needs to be, the possibilities are almost endless on what can be accomplished.

WHAT TO WEAR UNDER KNEE BRACES: MR. KNOW-IT-ALL