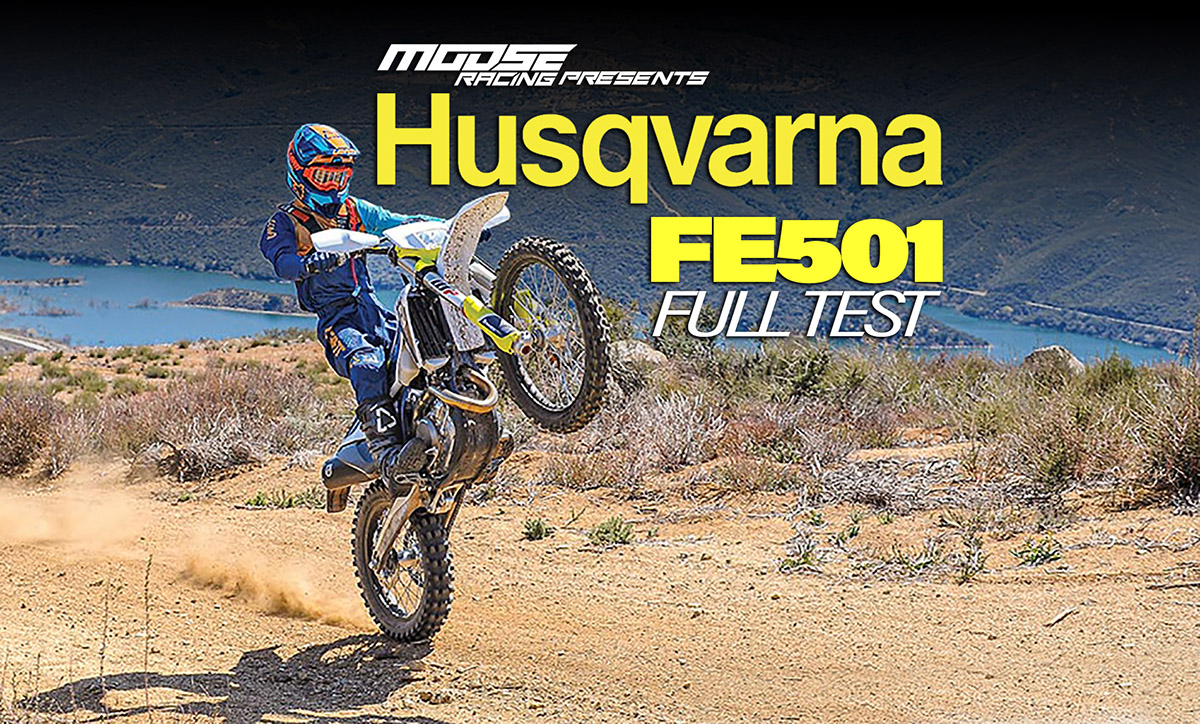 Green-sticker-legal off-road bikes are a dying breed due to more stringent requirements being implemented each year to meet emission standards in the state of California. In the past, riders looking for a serious off-road machine had few choices. They could strip down a dual-sport bike, go the red-sticker route, or deal with some of the heavier, overly strangled machines offered for the trail rider. Fortunately, the times they are a-changin’, as several manufacturers have upped their games and are throwing superb technology at the legal off-road-only machine.

Husqvarna introduced its FE501 in 2020. This was a major commitment, and a costly one, as offering a legitimate off-road bike in the U.S. means that it’s under the scrutiny of the EPA.  Therefore, it needs to pass emissions and noise tests that are almost as strict as those for the street bikes. Historically, that affects performance in a bad way, and that makes full-time off-road guys flat crazy. Fortunately, there is enough demand for serious, versatile, balanced and broadly powered machines that Husqvarna, along with KTM of course, jumped in aggressively.

Introduced in 2020, the FE501 was a brand-new machine, from the redesigned engine to the chassis, suspension and bodywork. For ’21, there have been few changes, but let’s look inside the machine.

THE VITAL ORGANS
The powerplant is a 510cc, SOHC, six-speed, fuel-injected design that is considerably lighter than past units. It has new camshafts, a new head, updated fuel injection and reworked engine cases—all updates that shave weight off of the engine. A new, lightweight, box-in-box-type piston made by König uses a 10-percent-lighter piston pin, targeting more performance and less vibration. The compression ratio has increased from 11.7:1 to 12.75:1 for even stronger engine performance. There are a number of advanced electronic rider aids, such as traction control, with a handlebar-mounted map select switch that alters power delivery to suit terrain and skill levels.

The FE501 is fit with a new six-speed transmission made by Pankl Racing Systems and features stronger materials for enhanced durability and reliability. All four-stroke engines are fitted with a gear sensor, giving the option of different engine characteristics for each gear.

The electronic fuel injection feeds through a new Keihin 42mm throttle body. The 501’s ECU features mapping that has been adapted to the new exhaust, airbox and engine configuration; regulates the traction control; and is activated by an optional map-select switch. It also provides different maps for each gear according to the information received from the gear sensor, ensuring maximum power as you shift through the gears.

Husqvarna has fit its four-strokes with two-piece header pipes that allow better access to the shock (say hallelujah, brother!). The O2 sensor on the header pipe shows that it’s a closed-loop EFI system. “Closed loop” is when the ECU refers to the O2 sensor for feedback, and the ECU will modify its fuel table based on the readings on the O2 sensor. Out back, the muffler is super compact and is fit with a spark arrestor. 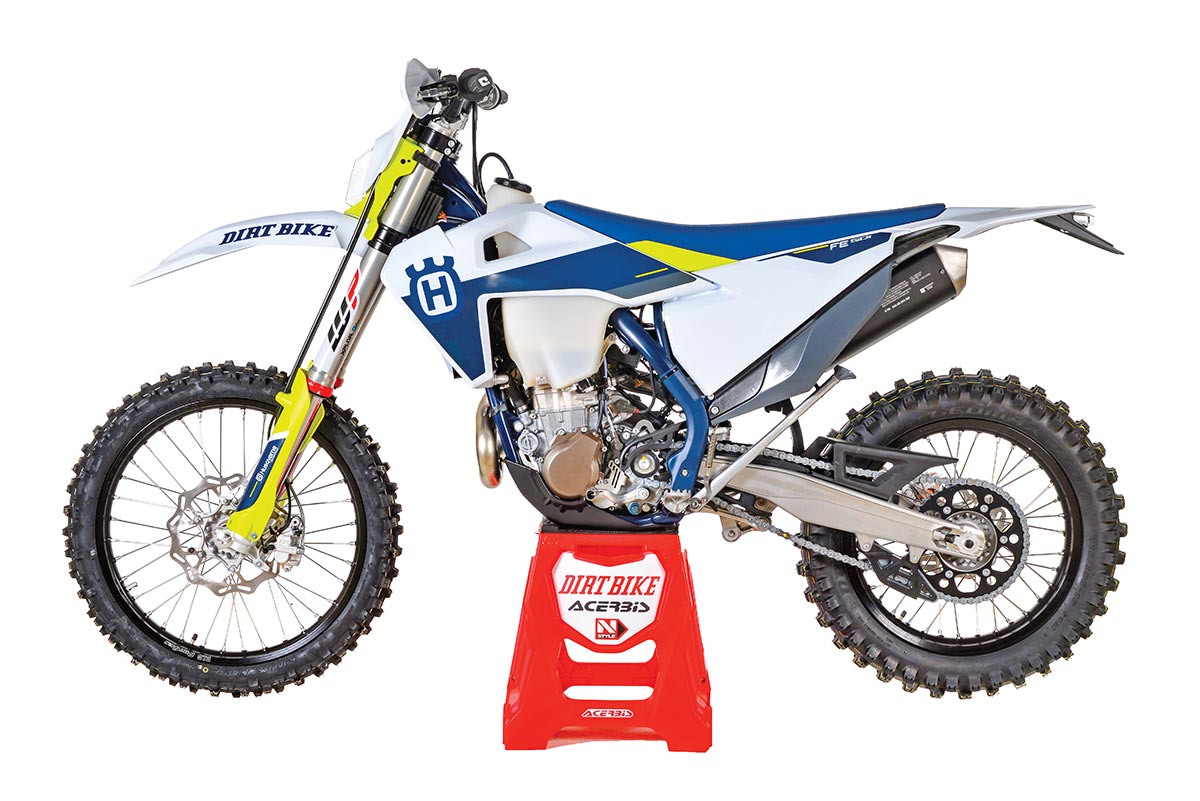 All of the hydraulics on the Husqvarna FE501 are Magura. That’s the clutch and brakes, and that is one area where the machine differs from the KTM. The frame is chromoly. The rear subframe is a composite (70-percent polyamide/30-percent carbon fiber) targeting light weight and rider comfort. The FE501 uses linkage at the rear suspension. The damper is a WP XACT shock. Husky says that the linkage lets the machine ride lower in the back for increased control. The fork is a WP XPLOR unit with adjustable compression damping on the left fork and rebound on the right. It has been fit with a new mid-valve that keeps the fork riding higher, plus has improved bottoming resistance.

TRAIL TIME
Incredibly, the FE501 feels almost lethargic. A chunk of the blame goes to the very effective exhaust system, which is whisper quiet and is mated to a very torquey powerband that has an appetite for chug, short-shifting and making traction. This engine is happy being ridden on tight trails but will blast through the desert with a nearly vibration-free ride. The clutch pull is light via the Magura hydraulic unit, and once you click it into gear, forward motion happens quickly and serenely. First, second and third gears are well-spaced, with first used only for the slowest of obstacles. There are no funny gaps down low, but the gap from fifth to sixth is pretty large, and sixth gear will pull the bike up into the 90-mph-plus range. 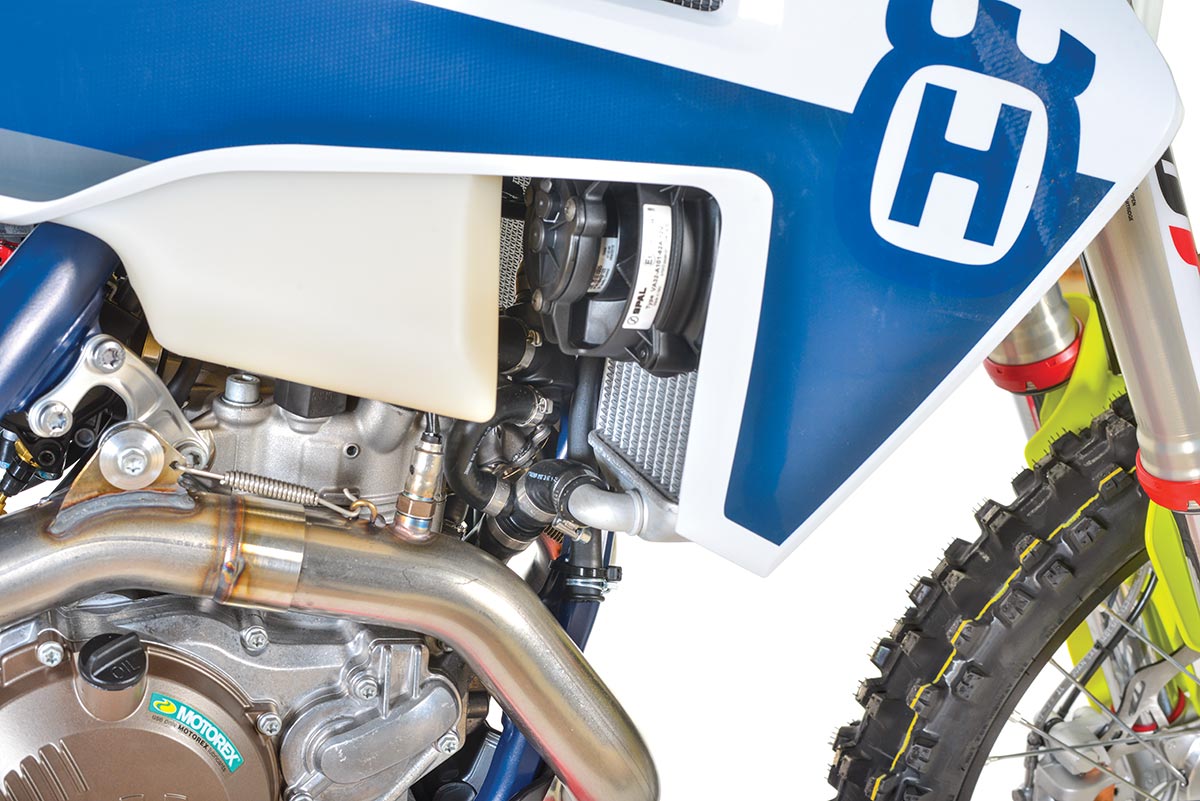 It makes strong power and is totally non-violent, and via the handlebar-mounted map switch you have access to two EFI maps and traction control. Map 1 is the standard and is a bottom power-oriented map designed for tight terrain. Map 2 lets the bike rev up quicker and pull longer and harder. The power-curve change isn’t huge, but the bike will rev slower and put more power to the ground in Map 1. If you plug in traction control to either of the two maps, it will tame the bike that much more. This is extremely useful when riding in rocks or slippery conditions, like mud or water, and wanting to make as much traction as possible for forward momentum. This button won’t make you Superman, but it will prevent the bike from wanting to light up the rear tire just enough to make a difference.

The WP suspension is soft, cushy and definitely designed for trail work, not high-speed obstacle swallowing. We have had a lot of time on this particular fork (with various KTM, Husqvarna and GasGas machines), and it works well in slow-speed riding or extremely rocky terrain but suffers slightly at speed. Again, we played with compression and preload adjustments to hold the bike up in the stroke a bit more in the higher speeds and deep whoops. This can be accomplished with minor adjustments, depending on your weight, but the fork is more at home in rough and slow terrain, which is totally fine. We can get along with a fork that is plusher better than one that is too stiff.

Out back, the XACT shock also offers a very responsive ride, leaning way towards the hack and litter that a trail rider will come upon as opposed to blitzing whoops in Lucerne Valley. Incredibly, Ryan Koch, at 135 pounds, felt right at home with the stock spring rate. And after setting the sag at 102mm, he still felt that it was too soft damping-wise to let him feel comfortable attacking speed zones with bomb holes. We are fans of the linkage, especially its ability to keep the rear end low, which is nice for severe drops in technical terrain. Also, it holds its head better at speed than a PDS design, which really prefers cobby, tight terrain.

Top marks go to the 242-pound carcass, which is very light and therefore quite manageable on the trail. It’s quite flickable in tight terrain. The bodywork is exceptional for feel, and the ergos allow the rider to get through bad terrain with the least amount of input required from the rider. The more high-end the pilot, the better the machine responds and more advanced riders didn’t scold the softly mannered power character. They embraced it and used the torquey muscle as an advantage in maintaining traction.

THIS AND THAT
The FE501 has a strong cooling system and comes with a radiator fan. This is key and keeps overheating in tight terrain out of the equation. It has no-tools-required air-filter access, and nestled inside the airbox boot is a reed valve that is a decibel damper.

We got incredibly good fuel economy—just under 25 mpg. We still don’t love the click-in gas cap and will most likely add 2 teeth to the rear sprocket (stock is a 50) just to tighten up the ratios for our woods riding. The chain is an X-ring. The chainguide is quite strong, and the plastic skid plate offers a modicum of protection to the frame and cases.

We’re super impressed with the mapping, as the FE runs strong and clean and rarely flames out. On the stock saddle, the cover has improved, and the seat base is softer and offers a touch wider platform for your cheeks. The stock footpegs are a good base platform and offer great grip.

The pull on the clutch is ultra smooth and light for a big four-stroke. We experienced zero fade or change in pressure, even when we abused the clutch on tight trails. The Magura brakes offer strong stopping power and modulation, even on the steepest downhills, but lack the inherent power of the Brembo units.

This machine is a very inviting test bed in the search for power supplements. While we do not want to destroy its trail appeal, we do know there are a few changes/mods that could really wake up the FE501. More on that next month. 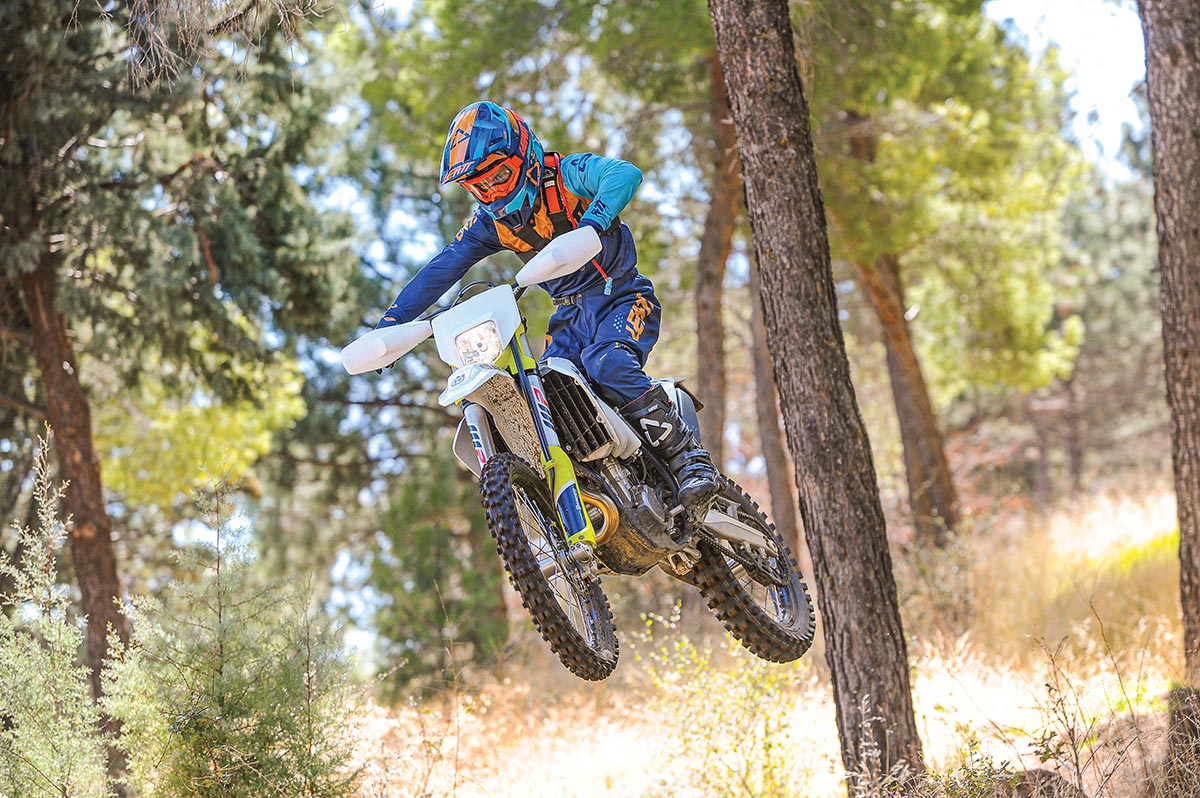 THE DROOL FACTOR
For a big-bore, 500 four-stroke, the Husky FE501 is a pure joy to trail ride. Most big-bore bikes from the past were on the verge of 300 pounds and would overheat when ridden slow. That’s not the case with this machine. It’s never going to be anyone’s first choice for a hard-enduro bike, but it doesn’t shy away from technical terrain, as the torque is an absolute highlight of this engine. Desert racers will be able to coax more boost. Heavier riders will get the suspension set up to meet their needs, but the bottom line is that it has good bones, and it has the ability to do it all. The FE501 costs $11,299.