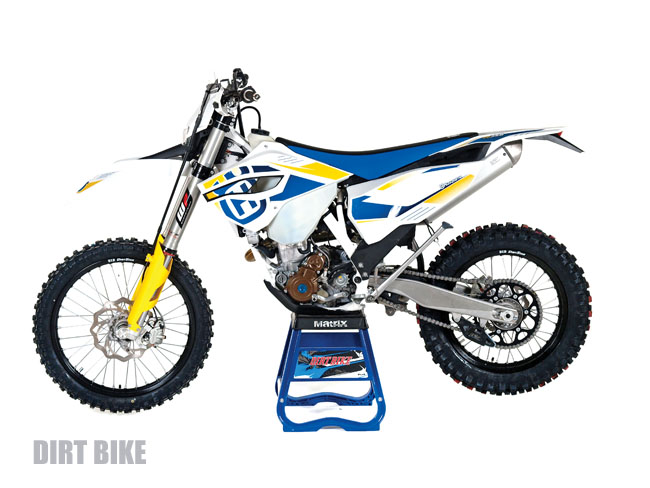 Okay, enough is enough. No more crying over the KTM purchase of Husqvarna. You can say whatever you want about having fewer choices, but two facts cancel everything else out. Number one, KTM saved the Husqvarna brand. It would be dead and buried within a few years without KTM’s bailout. Number two, the bikes that carry the Husqvarna logo today are better. They are designed better, they are built better, and they perform better than the ones that were made at the old Husqvarna factory in Varese, Italy. The new Austrian-made Husqvarna FE350 is a perfect example.
It’s very similar to the KTM 350XC‑W, that much is true, but it looks different, handles differently and is unique enough to present itself as a legitimate alternative. Bottom line: you still have a choice. And what a great choice it is. The Husqvarna FE350 might just be the ultimate off-road four-stroke. KTM designers should be concerned at this point. Did they make it too good?
THE PARTS
Aside from the bodywork, KTM engineers didn’t design any parts from scratch for the Husky FE350. They looked long and hard at the parts shelf and at other models. It has the motor from the KTM 350XCF-W, the frame and linkage from the KTM 350SX-F, and the subframe and fork from the Husaberg 350.
That motor began life in the 350 motocrosser that won the last three MX1 World Championships for KTM. It was redesigned for 2012, and that configuration is only now making its way to the off-road side of the fence. It is, basically, a bored-and-stroke 250 with super-sized drivetrain parts. For off-road, it got a six-speed gearbox, the DDS clutch that uses a diaphragm spring rather the six coil springs, and different EFI mapping. The FE is fully compliant with EPA and CARB off-road emission regulations, which means it’s eligible for a green sticker in California. The fuel tank is vented through a charcoal canister, and various engine hoses go into the airbox, but all other measures are invisible. That airbox, by the way, is a giant one-piece unit that acts as a subframe—a familiar Husaberg item.
What really separates the Husky from anything else on the market is that is uses motocross-style linkage with off-road rear-suspension settings. The KTM XC-W models all have the shock connected directly to the swingarm without linkage of any kind. That might not sound like a life-altering change, but trust us, it is. The fork is a WP 4CS, with the rebound damping in the right side and the compression in the left.

THE IDENTITY
When KTM executives took a deep breath and walked into this deal, they knew they were accepting a new identity as well as a new company. Husqvarna is one of the oldest motorcycle companies in the world and has a legacy of off-road fanaticism. Luckily, KTM has its own expertise in that field, and the 350 hits the bull’s-eye perfectly. The motor has a powerband that goes and goes and goes. All of the power is fun and usable. At low rpm, it smoothly pulls without any traction-breaking surges or hits. On top, it pulls hard when you need it to without becoming a monster. The 350 makes excellent power by turning crazy-high revs, but you don’t have to go up there if you don’t want to. The best thing is that it has no dead zones. In that incredibly long rpm range, there are no areas that are gutless, no areas that are scary fast, and no areas that cough or sputter. It’s all prime cut. The 350 even excels in the one category where two-strokes generally rule. Right above idle, the 350 keeps on chugging forward as long as you keep the throttle open. It rarely stalls. We still won’t take that trophy away from the KTM 300XC-W two-stroke, but for a four-stroke, the 350 is impressive.
It also has two-stroke agility. The bike isn’t feather light. It can’t be, not with fuel injection and electric start. But, it’s not bad. It actually weighs about the same as many two-stroke enduro bikes of the last generation, and we never complained they were heavy. The 350 feels much lighter than a 450 motocrosser for a number of reasons. First, power always makes a bike feel heavier, and as fast as the 350 is, it’s still not in the same league as a 450 MX bike. Then there’s all that mystery science around flywheel mass and inertia. A motor’s crankshaft doubles as a big gyroscope. If you have a heavy crank, the good news is that it makes the motorcycle more stable. But, that’s also the bad news. By having less of a built-in gyro, the 350 is more maneuverable than its 450cc counterparts. It can be less stable, too, but in the FE350’s case, that’s not a factor because of excellent suspension.
As we mentioned, the Husky’s combination of suspension parts isn’t quite like anything else in the off-road world. For years, KTM stubbornly stuck with no-linkage PDS rear suspension. Motocross guys screamed for linkage and got it a few years back, but off-road guys liked the way things were, so the off-road bikes kept the old system. The Husky might be a test balloon to see if linkage could be accepted across the board. Frankly, we love it. The PDS system was great at low speed, but when you got into third, fourth and fifth gears, it made the bike feel stink-buggy. It would dive too much under hard breaking and sometimes cause the bike to do a little dance. The Husky does none of that. The bike has good low-speed compliance but without that PDS, nose-low attitude. At speed, it feels well balanced and stable. It’s still very soft-feeling, but both ends are evenly matched. Overall, the rear suspension of the FE is excellent for off-road work and even natural-terrain motocross.
We like the fork too. It’s cushy on roots and rocks and in almost any terrain you encounter on slow-speed trails. As with other 4SC-equipped bikes, the Husky doesn’t like sharp impacts at speed. The faster the impact, the more it transfers to the rider. That makes it less accommodating to the racer, who hits everything hard and fast. For most trails, though, the suspension at both ends of the Husky is a big plus.
THE PROOF, THE PUDDING AND THE PLASTIC
Here’s an interesting tidbit: the Husky has better plastic parts and bodywork than the KTMs. The shrouds have smoother surfaces with fewer places to catch, the seat has a better feel, and the fuel tank holds slightly more. Throw that in with the airbox, which is slightly easier to access, and you have advantage Husky. But on the other side of the coin, there’s the Husky’s kick-starter. It’s not there; there’s just a plugged-up hole where the KTM XCF-W has a nice shiny kick lever. The Husky’s electric starter works fine, but you never know. Like all KTMs, the Husky has a long list of really good parts. It has a hydraulic clutch with a super-light feel, and the Brembo brakes are outstanding—the best in the business. The handlebars, levers, rims, chain, and sprockets are all the very best you can buy.
Overall, we couldn’t love this motorcycle any more. It does everything we like, and does it all well. We can’t help but wonder if there are some closet Husqvarna fans working at KTM. It’s clear that nothing was held back and that the people in charge want Husqvarna to succeed. o