This is an odd story simply because it is the antithesis of what we have pleaded for over the last decade; that being a proper street-legal machine that is adept at chewing on the off-road environment. KTM answered our petitions with the EXC plate-legal line of machines in 2007, and now, with the Husqvarna alliance, the evolution of these machines has been mind-bending. Unfortunately, all the development effort that produced the bikes we longed for has stifled development of KTM’s off-road-only equipment. Both companies shelved purpose-built enduro machines in favor of dual-sport or cross-country machines only.

So, if you are a rider who favors trail riding, be it in the forest, woods or  desert, your options do not include a true off-road four-stroke machine. In the past, the best option was an enhanced version of a dual-sport machine. It offered a stronger powerband, more focused suspension (meaning it liked gnarlier stuff), and it was fit with an exhaust that was quiet and spark arrestor-equipped. Now you can have a street-legal dual-sport bike or a closed-course racing machine that is a redressed motocrosser.

Enter Dick Wilk, owner and operator of Dick’s Racing. We have a long history with him, mainly because he’s an off-road rider who builds machines that make him smile. Like our staff who often enjoy the off-road world where a plate isn’t necessary, the MX-based cross-country machine is a handful. Dick took a street-legal machine, stripped it down and injected adrenaline in areas so it could embrace tight, technical hill-climbing and trails that demand lightweight, tractable power and versatile suspension. 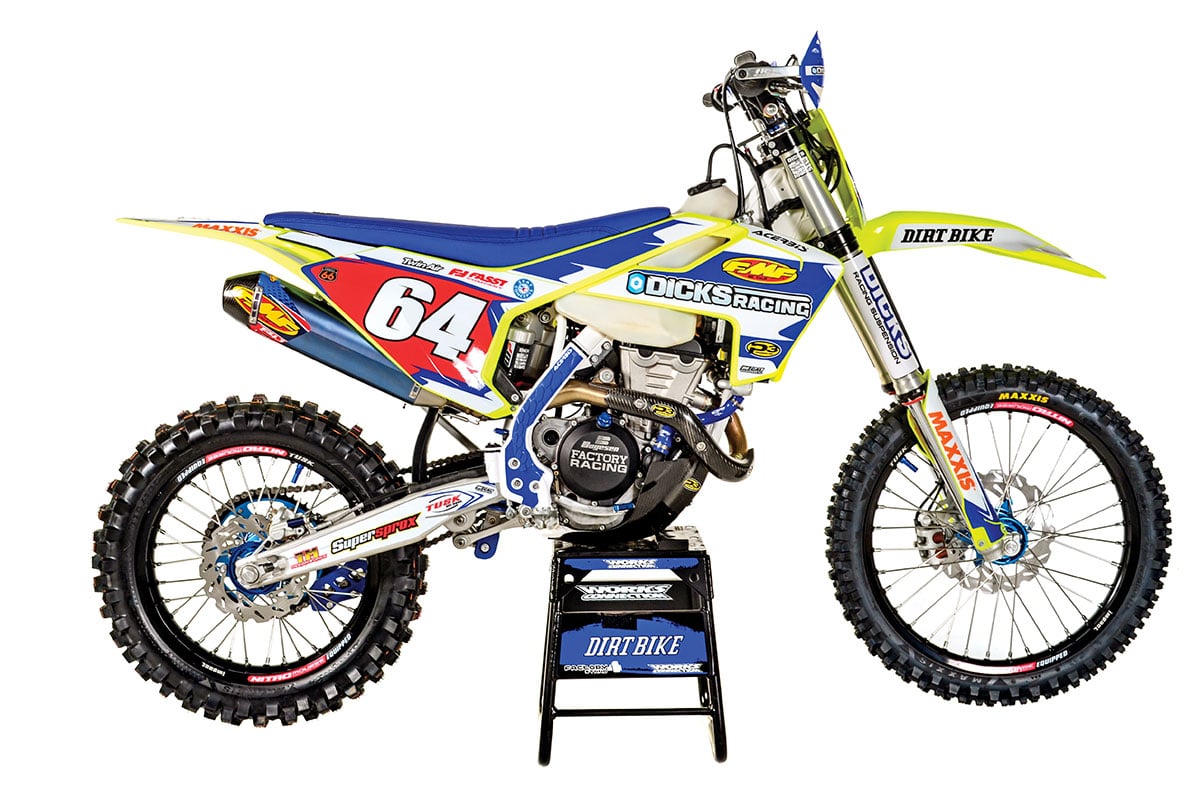 In Wilk’s words, “Due to emissions constraints, it’s hard to tell what the true potential of this bike really is. The off-road version of the 350 has always been good, but this motor is all new. It has a 6mm-shorter stroke and bigger bore, which make it more like the MX version. I believe it has lower compression, different cams/valves and a heavier crank/flywheel, because its personality is drastically different from its angry brother. I checked the parts numbers between the two, and almost every piece is different between the hard-hitting FC/FX and the mild-mannered dual-sport FE. To be honest, that’s what I was hoping for when I decided to take on this project.

“During the first ride another weakness became clear—the WP fork, although plush, lacked any real damping or progression. The forks were busy, meaning too much wandering around to be stable. The rear shock was better but was a bit too soft to tackle big stuff. The bike was also heavier than the FX350 I was used to, which made it less flickable. The mission then was to convert this dual-sport machine into the true off-road bike that it was meant to be.” 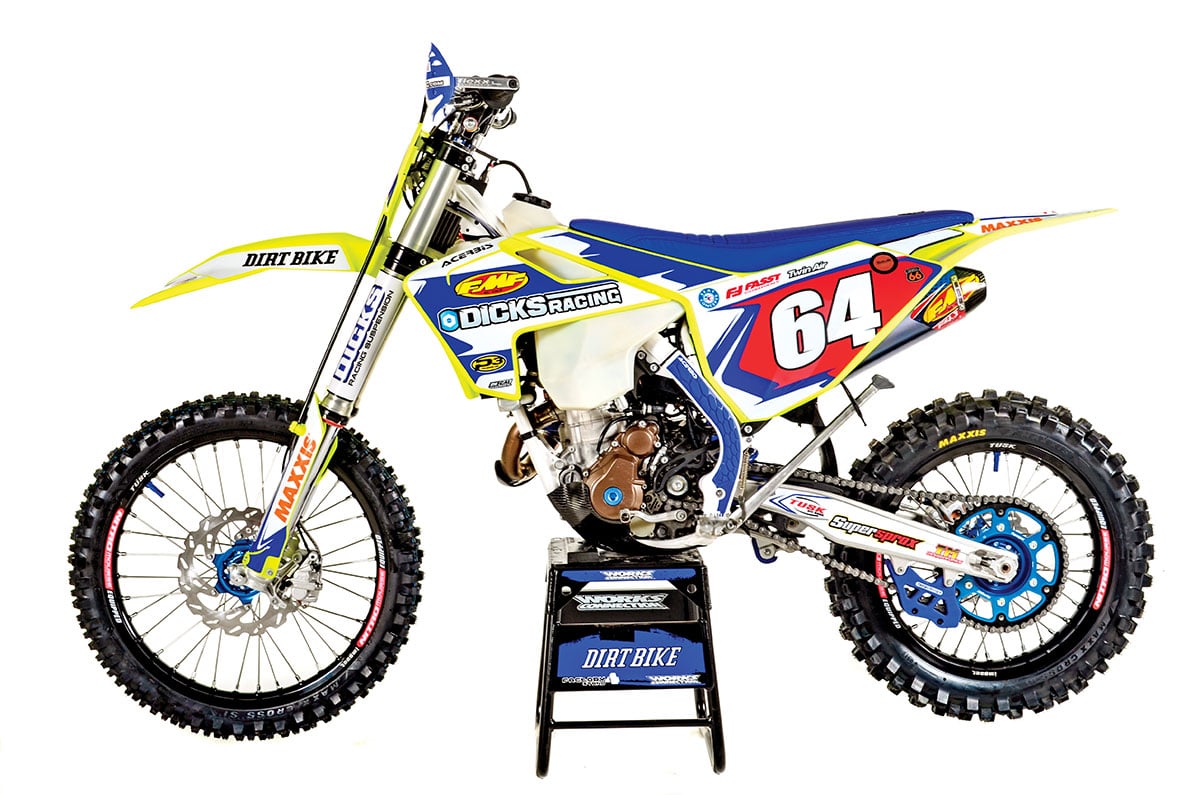 First off, Dick’s Racing dealt with the power and came up with a kit that did not require any internal changes (piston, cams or valves). Initially, all the emissions equipment that made the bike street-legal was removed. The goal here was to improve the air and fuel flow, so the stock restrictive and heavy muffler was also shelved. Dick’s replaced the reed-valve airboot, which targets noise suppression. Though it does help a bit with bottom power, it does so at the expense of top-end performance. Dick’s Racing uses a high-flow model that supplies the necessary air volume to make proper power. Dick’s fit up an FMF titanium 4.1 rear muffler to the stock header, which resulted in a strong bottom and a much stronger pull from mid to top. Dick’s Racing also fit a Torque Wing into the throttle body, which calmed down the turbulent air entering the intake tract, resulting in more power via a stronger response. Dick’s Racing installed a Twin Air airbox vent that also improved air flow to the intake. All of this was enhanced by a JD Jetting fuel tuner that is equipped with a setting specially designed by Dick’s Racing. The fueling through the throttle body must be altered, and the standard JD kit does not take into account the high-flow airboot, Torque Wing or airbox vent.

On the suspension side of the project, the stock FE350’s WP XPlor 48 fork is cushy and soft. The XPlor fork is an open-chamber design that incorporates compression and adjustable rebound in the right fork and little damping through a compression adjuster on the left fork. Dick installed his APS (Advanced Progressive System) that utilizes bypass technology, making the fork both position- and speed-sensitive. This means that the forks get progressively stiffer as they travel through the stroke. Most of the transformation goes into the left fork that wasn’t doing much anyway and uses a custom-made piston with shims to provide damping in both directions. The right fork was re-valved to provide more rebound damping, necessary for the addition of stiffer .47 springs (.45 is stock). The low-speed damping was increased to help hold the fork up in the stroke. Adjustability is at the top of each fork and can be altered while you ride.

Out back the shock was re-valved stiffer on high-speed damping to keep it from blowing through the stroke. The compression-valving mod has some progression, so it targets initial plush action on slower-speed hits. In order to match the stiffer 5.2 coil (4.9 kilograms is stock), the rebound valving was increased. Overall, this bike was set up for a 200-pound rider with gear for full off-road use.

Frankly, there is no comparison between a stock FE350 and this stripped-down version. The Dick’s Racing machine has noticeably more power than the stock version. With the additional meat to the powerband, the stock gearing felt comfortably spaced and focused to handle a variety of speeds and terrain. The power is smooth and easy to ride, which never hurts the off-road pilot looking to make traction, whereas the hard-hitting FC/FX moto version can be distracting. Overall, the Dick’s Racing machine targets traction, won’t flame out and has a good, strong mid-to-upper pull for some good hill-climbing abilities.
Equally impressive were the suspension gains. It has far better resistance to bottoming than the stock fork, which dives through the stroke like a bowling ball falls through yogurt. It stays up in the stroke, and the stiffer springs and damping alterations let you attack obstacles. You never have to fear the big bottom-out, and it retains a good plush factor. Helping here is the Fastway System 5 steering damper, which has high- and low-speed adjusters, as well as sweep range, sweep damping and return-to-center damping adjustments. Dick’s Racing prefers the under-the-bar damper and uses a 15mm-shorter Fasst Flexx bar, which has the benefit of reduced vibration and impact elimination. Still, this raises the bars quite a bit (38mm taller than stock), so the handlebar mounts were machined to reduce the bar height an additional 6mm. For a 6-foot rider, this worked well. Shorter pilots would need to use the above-bar kit and forgo the bar pad.

Dick’s Racing installed a litany of products, all with the goal of adding to the hard-core off-road persona of the machine. Maxxis tires mated to NitroMousse tubes made for a strong off-road pairing. The Tusk wheels, discs and chain added to the appearance, and gave Dick’s the option of having a spare set of tires ready to go. STR’s linkage guard, caliper cooler, fork adjusters and air bleeders mated bling with function.
The core of the critical improvements came via the $999 engine package (FMF muffler, JD fuel tuner, Thunder Products Torque Wing, Twin Air airbox vent, FC airboot, emissions block-off kit) and the over $695.00  (plus springs)  for the suspension surgery. Dick’s engine kit provided a 10-horsepower gain over stock. That’s a strong chunk of boost. And when you mate that to the 10-pound loss in tonnage and seriously versatile suspension mods, you’ve got a machine that can handle it when things get ugly.

CHAD REED SELLS IT ALL AND HEADS BACK TO OZ