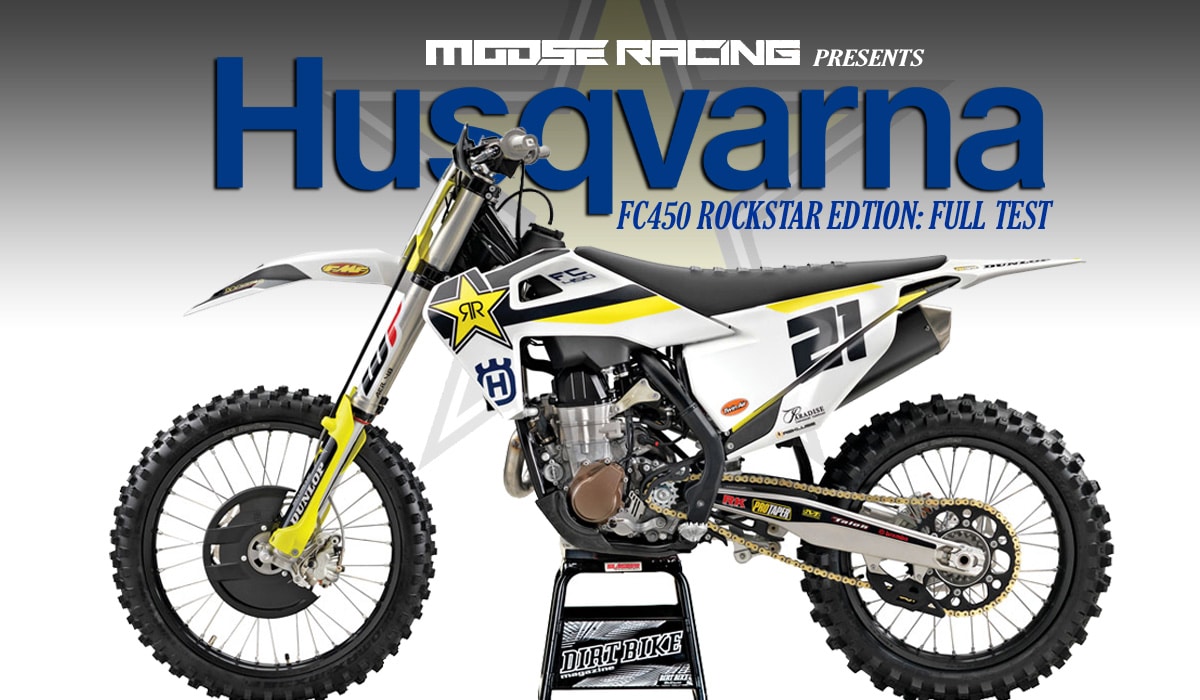 If you want to know what the 2019 Husky FC450 will be like, take a look at the newly released 2018 1/2 Husqvarna FC450 Rockstar Edition. It’s supposed to be a limited-edition race bike, imported in numbers substantial enough to make it qualify as a production bike under AMA Pro Supercross rules. The stated purpose is to introduce it just in time for the Supercross season so that Jason Anderson and Dean Wilson can have the absolute latest technology. Without it, the factory riders would have to use last year’s motor and frame. All that is certainly true, but everyone knows that the Rockstar Edition is mainly an advance scout for next year’s production bikes. By making a limited run of bikes ahead of schedule, Husqvarna gets to tease the public, work out production bugs and, of course, charge a premium price. This is a routine that KTM established back in 2012.

ULTERIOR MOTIVES ASIDE
If you have a dealer who likes you and don’t mind paying a little more, the 2018 1/2 Husqvarna FC450 Rockstar Edition can be yours with no resume and no pro license. Don’t think it’s just a graphics kit and some bling, either. This bike has more new technology and updated tech than most new-year models, starting with the head. Husqvarna made it much smaller and lighter than before. The motor is now 15mm shorter from bottom to top and 1 pound lighter, and it’s all in the head. The cam has a new surface treatment, and the whole transmission in now produced out of house by Austrian auto racing specialist Pankl. The overall design of the motor is unchanged, though. It’s still a single-overhead-cam configuration with electric start and a diaphragm-spring clutch. As a tribute to the race team, this edition has a billet clutch cover with a Rekluse logo. That particular feature probably won’t be included on the 2019 model. The clutch itself is unchanged from the standard model. It’s still hydraulically actuated with a Magura master cylinder. The new bike has a completely different exhaust system with a smoothly integrated resonance chamber and a more compact silencer—that probably will be standard for next year.
As for the chassis, it has the same dimensions as the 2018 version, but it’s said to be longitudinally stiffer. The wheelbase is the same, but can be longer simply because the chain adjuster slots are 5mm longer. (That’s a trick that the race team apparently uses to adjust the wheelbase for different tracks and riders.) The subframe is completely redesigned and now incorporates some carbon fiber components as well as polyamide. It’s said to be a 1/2-pound lighter. The bike also has new bodywork and a new seat for a more compact feel. The total weight of the bike should be a pound and a half lighter than the standard version, but then Husqvarna added items like a disc guard and a skid plate that bring the weight back up. We weighed the 2018 model and it was 228 pounds without fuel.

HALF-YEAR LEAP
We expected the Husqvarna to see big changes in 2019 simply because there were very few changes in 2018. We didn’t expect to see them this early, and we certainly didn’t expect more power to be at the top of the list. The 2018 Husky and its near twin, the 2018 KTM 450SX-F, were already the fastest and lightest bikes in the 450 class. Over the last two years, Honda and Yamaha have caught up somewhat, so someone in Austria must have been getting a little keyed up. The new motor, once again, sets the bar higher. It has more power from bottom to top. Not just a little more, either. It’s instantly noticeable. There’s no trade-off in bottom for top or vice versa; the new motor has more everywhere and even revs a little higher up on top. If you’re young and strong, good for you. You’re going to love it. If you’re already struggling to hold onto a modern 450 for a full moto, don’t worry. The extra power doesn’t make it any more difficult to ride. It still responds well when you ride it a gear taller, and because the increase is uniform from top to bottom, there’s no additional hit. We’ve long been skeptical that the average rider can use everything a modern 450 has to offer, but we can honestly say this latest escalation in the horsepower race doesn’t make the situation any worse for beginners and novices. For experts and pros, it’s a clear step forward.
Just as in the past, there’s a control on the handlebar that gives you several alternatives for power delivery. There are two EFI maps, traction control and launch mode, all available through the same switch. Map two makes the power peak a little later. Traction control puts a damper on sudden rpm gains. Both of these options make for such subtle changes that riders don’t have strong preferences one way or another. Launch mode, on the other hand, makes a very noticeable change in the power delivery, but very few riders use it in the real world.

FRAME GAME
Don’t think that the new frame and bodywork are going to make the Rockstar Edition handle dramatically different. It still feels like the same bike, and there’s nothing wrong with that. It’s easy to turn, reasonably stable and undeniably light. If you ride the new bike back to back with a standard 2018 version, you’ll notice that the new bodywork makes it feel narrower, and you might even think that it’s a little lighter, but the most dramatic change is in suspension. The stiffer frame combines with a redesign of the WP AER 48 fork to give the front end a different feel and guarantees that you’ll have to come up with new settings. The balance chamber in the fork has a much smaller air volume now. This is the air reservoir that works in opposition to the main chamber. Most riders probably didn’t even realize that the WP fork used such a design—it does, but the balance chamber is not externally adjustable. The WP is designed so that this chamber is self-filling.
Overall, we remain big fans of the WP AER 48 fork. It’s still the best air fork available on a production bike. It’s reliable, simple to use and has good action for medium and large impacts. The weakest area for the front suspension is that it’s harsh on small bumps. Most riders already felt this was a weak point, and the suspension might have even taken a step backwards. You won’t notice this at full race speed on a rough track. It’s more of a comfort issue. Whether this is the fault of the stiffer frame or the new fork design, we can’t say. We did make a little progress to mitigate the complaints, although most of our changes resulted in side effects elsewhere. Eventually, we decreased the oil level by 10mm, increased fork air pressure by 5 psi and lessened the rear shock compression damping by three clicks. We were happy with the final result, but we still feel the ultimate solution is a few clicks away.

ROCKSTAR
There’s little doubt that this bike is the best that 2018 has to offer. The Husky and KTM are already the class favorites for hard-core racers, and the Rockstar Edition is simply faster. There is, of course, a KTM Factory Edition with only a handful of differences to distinguish it from the Husky, so, once again, the two bikes are stuck in a self-imposed deadlock. That shouldn’t matter to anyone, though, as long as that deadlock remains in front of the 450 class.