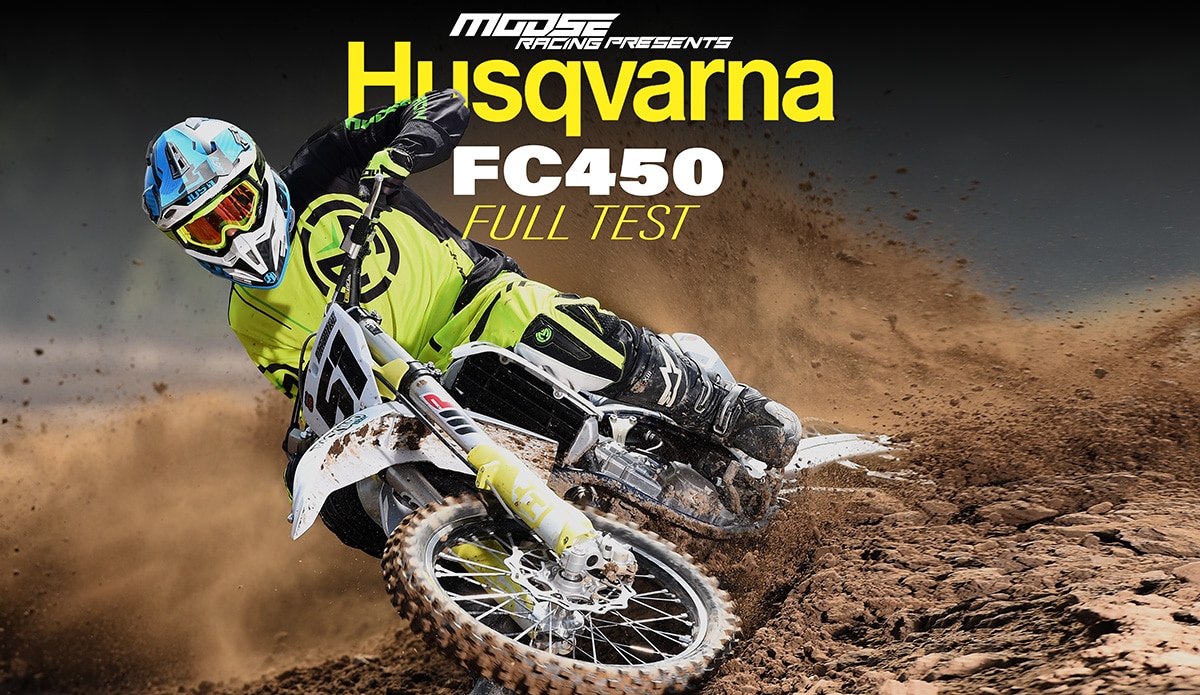 Husqvarna attracts a slightly different buyer from KTM. It’s more of a prestige brand, and the buyers are older, more affluent and more brand conscious. The people in charge have decided to capitalize on that. The 2020 FC450 isn’t a big redesign, but we already knew that. Husky tips its hand each fall by releasing the Rockstar Edition, which is a preview of the year to come. The frame and engine look pretty much the same as those of the 2019 model. There are some important changes, though, and one of them is a hint of change in philosophy.

HUSQVARNA TODAY
There are certain things you expect from the Husqvarna FC450. It has a steel frame, linkage suspension and a WP fork. The motor has a single-overhead-cam, a five-speed gearbox and a hydraulically actuated clutch. Those things aren’t going to change and haven’t since 2013. Everything else is on the table. In 2019, there were some big changes; the frame was made stiffer and the power was made softer on the bottom. It got a new more compact head, new bodywork and a new look. That look was distinctly Husqvarna, and there were already a number of other features that separated it from the KTM. Many of them were suppliers. The Husky’s rims were D.I.D, the clutch hydraulics were Magura and the handlebar was from ProTaper. As with most Husqvarna models, the airbox was a distinctive design that was integrated with the subframe, which was an idea carried down from the Husaberg days. Despite all that, you got the distinct feeling that the people in charge didn’t want there to be any real performance difference between the two makes. It’s not like the engineers wanted to leave anything behind and give any advantage to one over the other.

All those elements are still in place for 2020, but now a slight change in philosophy is showing up in setup. For the first time, the Husky’s suspension was developed independently. It still uses a WP air fork (now called the Xact) and a WP shock, but the valving and even the rear spring rate are different from those that will be used on the 2020 KTM 450SX-F. If the Husqvarna name appeals to older riders, then why not embrace that fact? The new suspension settings for the FC450 are therefore a little cushier. The rear spring rate is 4.2 Nm/kg (as opposed to 4.5 on last year’s model), and the recommended pressure in the fork is 10.7 bar (or 155 psi), whereas it was 10.9. The valving is different at both ends.

One of the most common criticisms last year was that the bike was a little sleepy off the bottom. We liked that, but some riders wanted more snap. Husky could have addressed that by opening up the airbox, but, once again, didn’t want to abandon riders who liked the smoother power delivery. The compromise was to offer a vented left numberplate with every bike sold. This allows more air into the motor and provides a considerable increase in throttle response. There’s also a different throttle cam in the parts package. A gray cam is in the bike, and a larger black cam, which makes the throttle open more quickly, is included. Then there are big changes in mapping. For several years Husqvarna has featured a handlebar-mounted map switch with three functions. First, it allows you to switch back and forth between two maps on the fly. It also allows you to activate traction control and to switch into launch mode. Previously, the two maps were very similar. Map two was supposed to be more aggressive, but in practice it delayed the power hit slightly and made the bike seem to have a milder personality. Now, both have changed, especially map two. Other changes for 2020 include a slight change in final gearing (49 tooth instead of 48) and an alteration in piston skirt shape aimed at improved reliability. 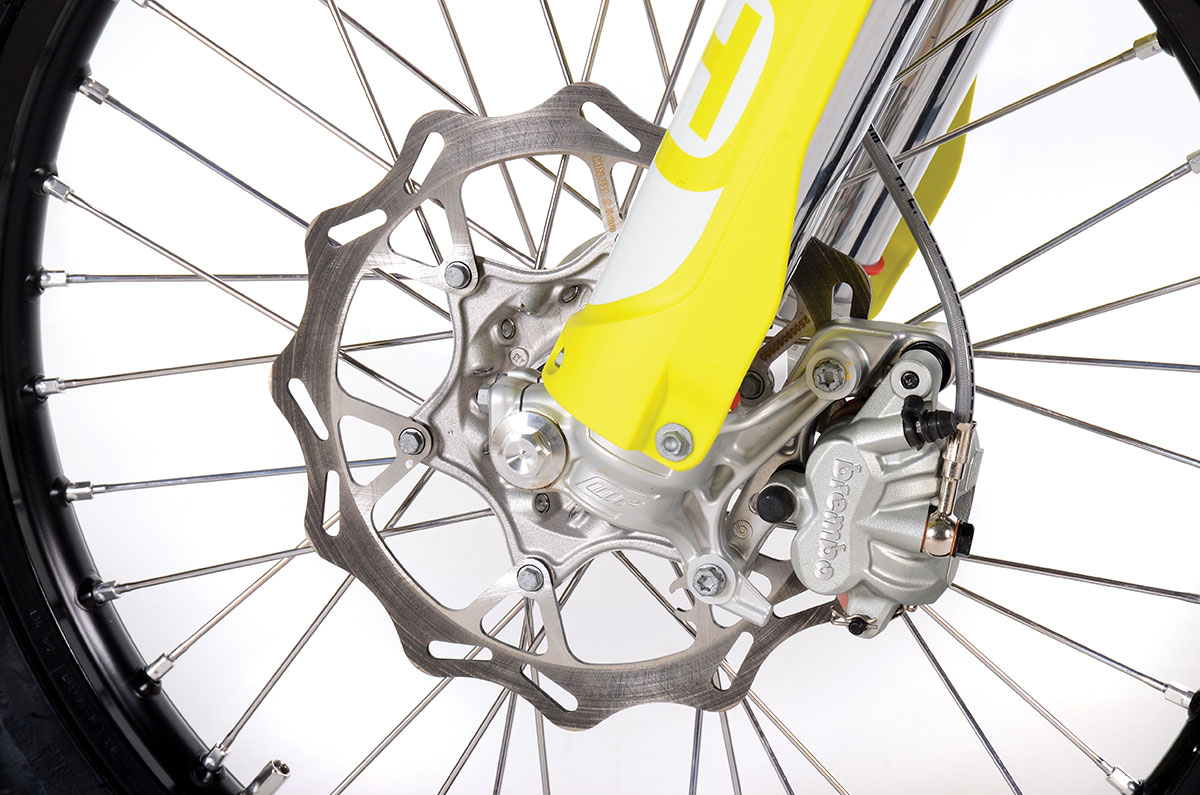 THE TALE OF THE TRACK

We understand why some riders wanted a snappier, more exciting powerband than last year’s FC450. Husky addressed that simply by offering options. The bike is delivered to dealers with the unvented numberplate, the gray (smaller) throttle cam and with a conservative EFI map in the map one slot. All of those add up to a bike that is essentially like the bike we loved last year. If you change all three at once, you have a different motorcycle. It’s snappier, harder hitting and a little noisier. The Husky still isn’t a brute. It’s nowhere near as aggressive as a 2019 Honda CRF450R or even a standard Yamaha YZ450F, but it gives you a feeling of more immediate power. The bike was always fast; you just had to wait for it. Now, it’s faster sooner and makes more power on top.

Surprisingly, the change to the vented numberplate makes the smallest difference of the three factors. It makes a little bit of difference down low and in the middle. The switch from map one to map two is more significant. They call it a more aggressive map, but in reality it’s just better. It gains power and response without any real trade-offs. The biggest difference of all, surprisingly, is the switch in throttle cams. When you swap out the standard gray cam for the black one, you are able to pull more throttle cable with the same amount of twist. You don’t realize how much difference that can make until you try it. Most of us don’t twist the throttle as much as we think. Even when we believe the twist grip is wide open, there’s usually some more throttle to be had. With the larger cam, you have to be a little more precise. A smaller handful goes a long way.

Is that a good thing? It depends. For Supercross-style tracks where you have good traction, you generally want more power sooner, so the black cam is the way to go. For most other situations, our riders preferred the gray cam. It offers you a little more control, and you don’t have to be on top of your game to hold on.

SOFTER OR STIFFER?
Likewise, the suspension changes for 2020 fall into the zone of personal preference. Just saying the suspension is softer is a little misleading. The suspension is different in feel and balance. It’s clearly a little cushier on little impacts, but it’s also more progressive. The Husky is no more likely to bottom for average riders doing average things than ever, but it can ramp up pretty quickly towards the end of the stroke. We’re fairly sure that larger riders will want to up the rear spring rate, though. If you’re over 190 pounds or so, it’s hard to get the right amount of sag without really cranking down on the preload. In the front, the new valving and internal changes are a step in the right direction. Last year we had a difficult time finding the perfect air pressure. The standard settings felt too stiff, but lowering the pressure resulted in too much dive. This bike didn’t give us that feeling at all. Despite starting with lower standard pressure, the Husky never felt divey. We still can’t say if it can match the comfort of the latest coil-spring forks coming out of Japan, but we know that the 2020 Xact 48 air fork is a step in the right direction. Next month, when we get the 2020 KTM 450SX-F, we will have a much better picture of how the new change in philosophy pans out. For now, we can only say that this is an improvement over last year’s Husky.

THE BIG PICTURE
Overall, it’s hard not to love the Husky FC450. It’s one of the best-handling 450s on the market for two big reasons. First, it still has that smooth, forgiving power, regardless of how many holes there are in the airbox or which throttle cam you use. Power, as we have pointed out many times, is the biggest single piece in the handling puzzle. Second, it’s crazy light. The FC weighs 225 pounds without fuel on our scale. Only the KTM is lighter, and some 450s are a good 15 pounds heavier. That affects everything, from cornering to overall stability. Beyond that, there’s a long list of features that we dig: the light pull of the hydraulic clutch, the easy way it starts and the comfortable overall layout. The list of things we don’t like is shorter. The seat cover is abrasive, the launch mode is hard to activate and traction control seems to be of very limited usefulness. That’s about it. If the company now sees Husqvarna as more of an elite brand, that’s okay with us. We’ve always thought of it that way.