HUSQVARNA 701 PROJECT: BEHIND THE BUILD 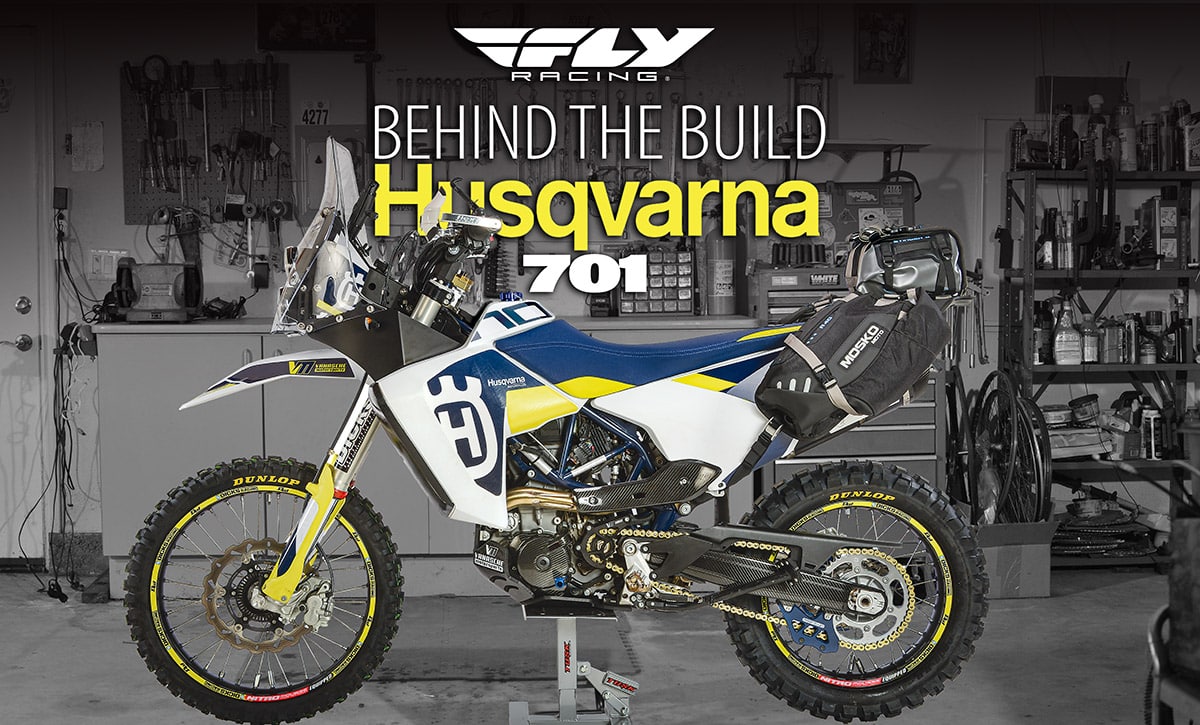 Dick Wilk has been building highly evolved racing machines for 30 years. His efforts covered desert racers, motocross, GNCC and National Enduro equipment and rally machines. His foray into the adventure bike segment began in 2014 with his purchase of a KTM 1190R. He left the dealership and went searching for some dirt. It didn’t take long to encounter just a little sand, and the heavily horse-powered twin, girthy and carrying an additional 225 pounds (over his dirt bike), left him wide-eyed and shaken.

Since then, he believes that less is more when it comes to a real adventure dirt bike. In his opinion, anything bigger than a 690/701 just doesn’t make sense if you maintain parameters that put the dirt manners of the machine on the same level as street DNA. His personal bike, a used 2018 Husqvarna 701 Enduro, is a single cylinder fit with a trellis frame, basic ADV electronics, strong brakes and WP suspension, and weighs 321 pounds. It has the basic DNA of a dirt bike with a myriad of opportunities to improve and mold both the handling and the power. His goals with the project 701 focused on setting up the suspension to be more versatile for both street and dirt, improving the power and enhancing the stability, comfort, durability and protection. And last, he wanted to make a conversion kit to swap into a super-moto mode via 17-inch wheelsets and the necessary parts to quickly make this happen in his garage. 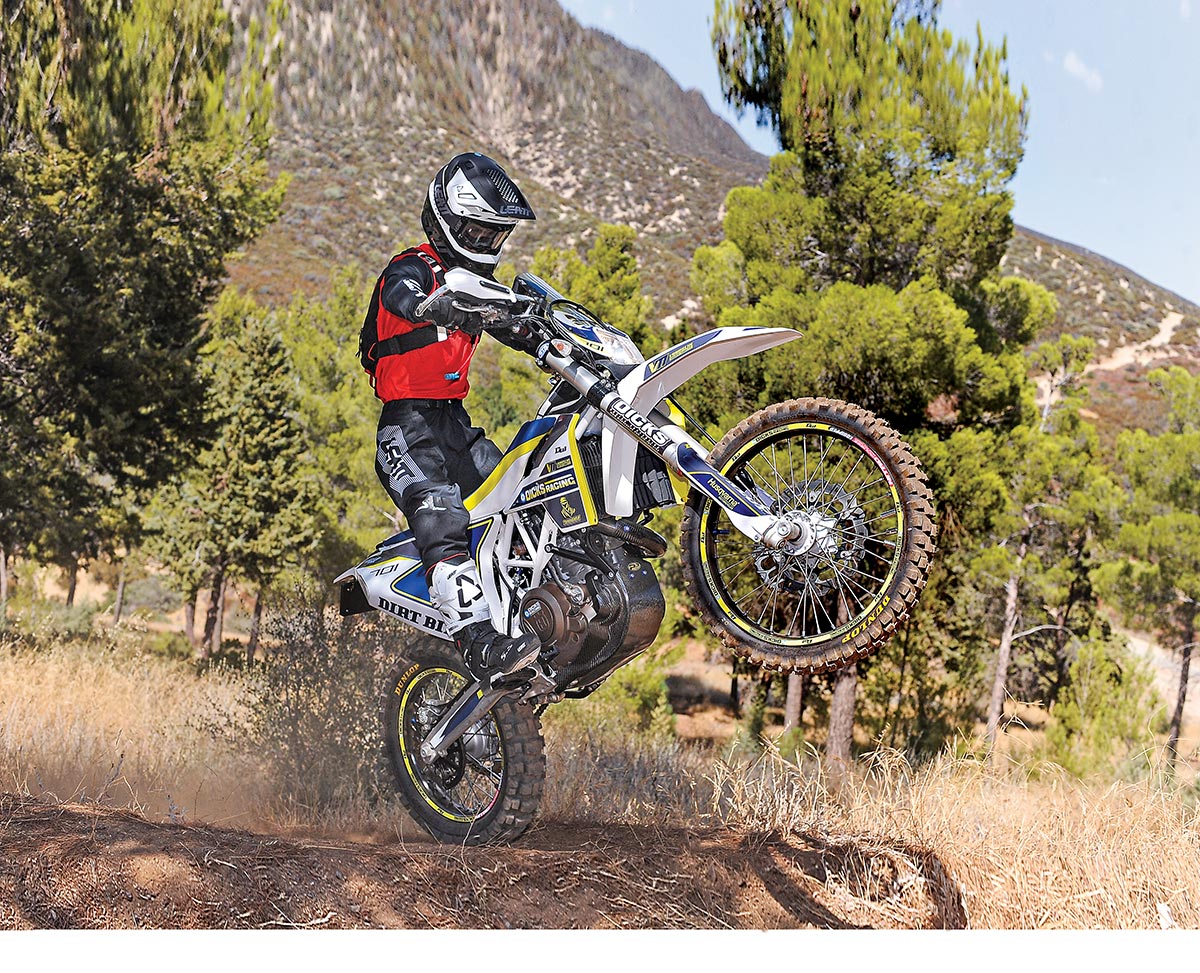 Dick feels that in stock form the bike is out of balance. The front end is too soft compared to the rear, giving it a stinkbug stance. The fork is a WP XPLOR type, just like all the KTM/Husqvarna/GasGas pure off-road dirt bikes, dual-sport and adventure models use. He feels that the forks lack sufficient damping to handle any serious trail input. The good news is, they are a well-built, open-chamber design with great potential. To correct the issues, Dicks Racing uses their proprietary APS fork system that converts them to utilize position- and speed-sensitive compression damping. This translates into front action that is plush and gets progressively stiffer as the forks move through their stroke. Stiffer springs are utilized, and STR push-button air bleeders are installed to relieve built-up pressure on long rides.

In the rear, the 701 has a linkage system that makes the action very progressive, and Dick re-valved the shock to improve the action and work with the 1.5 size stiffer shock spring for riders over 200 pounds. To make changing the shock spring preload adjustment easier, an X-Trig unit was installed that only requires turning an 8mm screw to tighten or loosen the spring. The shock is buried on these bikes and hard to get at, so this was a necessity.

In Dick’s words, “These engines are engineering marvels. How a single cylinder this huge can have no vibration while making 76 horsepower is unbelievable!” He felt there was more potential without sacrificing reliability and found an airbox that provides “still air” instead of an exposed filter that has air rushing over it. The Powercell Performance (www.powercellperformance.com) unit has nearly the stock volume airbox with a quick-change foam filter for increased protection from dust.

The stock muffler is extremely heavy and restrictive as well. Dick tested several options and preferred the titanium wings unit (www.wings-exhausts.com). This exhaust change took the stock ECU outside of its self-adjusting parameters. Air/fuel ratios and timing were altered for improved performance with the addition of a Coober ECU. This combination of intake, exhaust and ECU accounted for almost a 9-horsepower gain over stock.

Vanasche Motorsports (https://vanaschemotorsports.com) proved to be a great source for Dick’s project machine. They make everything in-house and have an extensive array of high-end products. Starting at the front, Dick installed their Scott’s steering damper under-bar mount kit in conjunction with a 15mm handlebar riser kit. Next was replacing the smallish stock footpegs with real adventure units that are much wider for improved foot support and are also 1/2 inch lower than stock. In addition, the weak OEM brake pedal was replaced with the ultra-beefy billet unit with stepped tip to match the lowered peg platforms. They also make a kickstand switch delete kit. If anything in that system is damaged or malfunctions, the bike won’t start. This piece is plug-and-play and solves the potential problem. Speaking of the kickstand, the stock foot is way too small to hold this bike up on anything but pavement. Moving to the left side, the flimsy plastic front sprocket cover was replaced with a billet piece that protects the expensive engine cases and vulnerable clutch slave cylinder from chain-related damage. Out back, the key-operated gas cap was replaced with a beautiful billet replacement that uses a matching cap that is easier to live with. The final item was the rear brake disc guard that is a one-piece unit and protects the floating rotor from rock abuse.

Other essential parts of this build included a P3 carbon fiber skid plate and exhaust header guard and heat shield. One of Dicks’ most noticeable improvements was the addition of Flexx handlebars. Their design utilizes rubber dampers that cushion the impacts in the off-road environment. This greatly reduces fatigue in your hands, wrists, elbows and shoulders, especially on long rides. In addition, they have aluminum handguards made specifically for their bars that mount with threaded inserts on the bar ends and to the pivot point of the bars, which doesn’t interfere with the movement of the design. They also make a dash plate that enables mounting a GPS/phone convenient and centered in the rider compartment. Another absolute must-do was the Seat Concepts comfort seat. Once you use one, you’ll understand. These two products take rider comfort to another level.

Dicks Racing worked with Decal Works in creating custom graphics for the bike that paid homage to the blue and yellow Crown logo of the iconic Husqvarna brand. They also made the matching rim graphics that gave the black wheels much-needed pop. 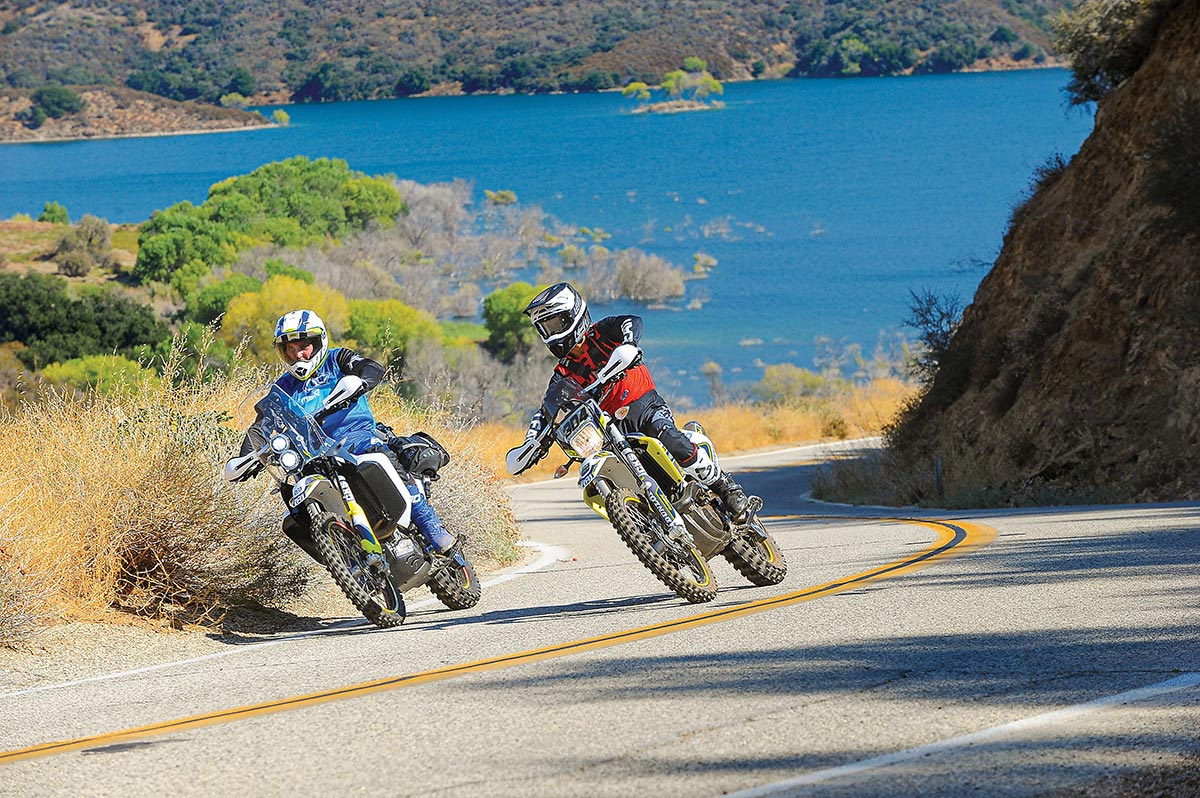 Dicks was also focused on making it street-worthy to run errands or to attack twisty roads with a vengeance without wearing out the Dunlop 908/606 knobby tires with Nitro Mousse foam tubes that he uses off-road. Dicks Racing has custom 17-inch wheel kits made for this purpose that come in any color and come with Dunlop Street tires, brake discs, a shorter kickstand and special fork guards that are ready to bolt on. Once converted, the bike transforms into a brilliant, manageable and fun tarmac steed.

This machine and his similar 701 long-range rally project showcase modified ADV machines that clearly target owners equipped with a passion for adventure and no fear of embracing terrain that humbles well-equipped big twin bikes. These bikes are expensive. The mods require a hefty checkbook, but the win comes in increased stability, suspension balance and the ability to gnaw on nasty scenery all mated to a lighter, livelier powerband. Considering the crossover between the KTM 690, GasGas 700 and Husqvarna 701, we think Dicks Racing can count this as time well spent. Give Dick a call to tap into his vast knowledge of this project and all things in the dirt bike universe.
www.dicksracing.com