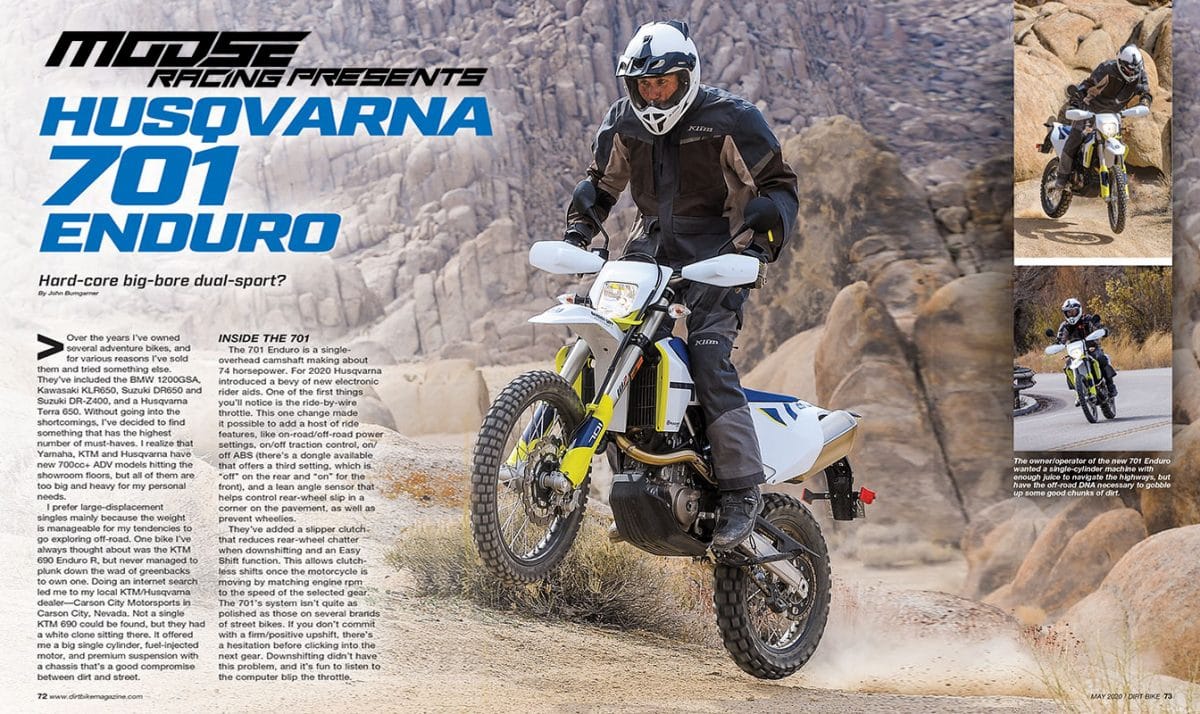 Over the years I’ve owned several adventure bikes, and for various reasons I’ve sold them and tried something else. They’ve included the BMW 1200GSA, Kawasaki KLR650, Suzuki DR650 and Suzuki DR-Z400, and a Husqvarna Terra 650. Without going into the shortcomings, I’ve decided to find something that has the highest number of must-haves. I realize that Yamaha, KTM and Husqvarna have new 700cc+ ADV models hitting the showroom floors, but all of them are too big and heavy for my personal needs. 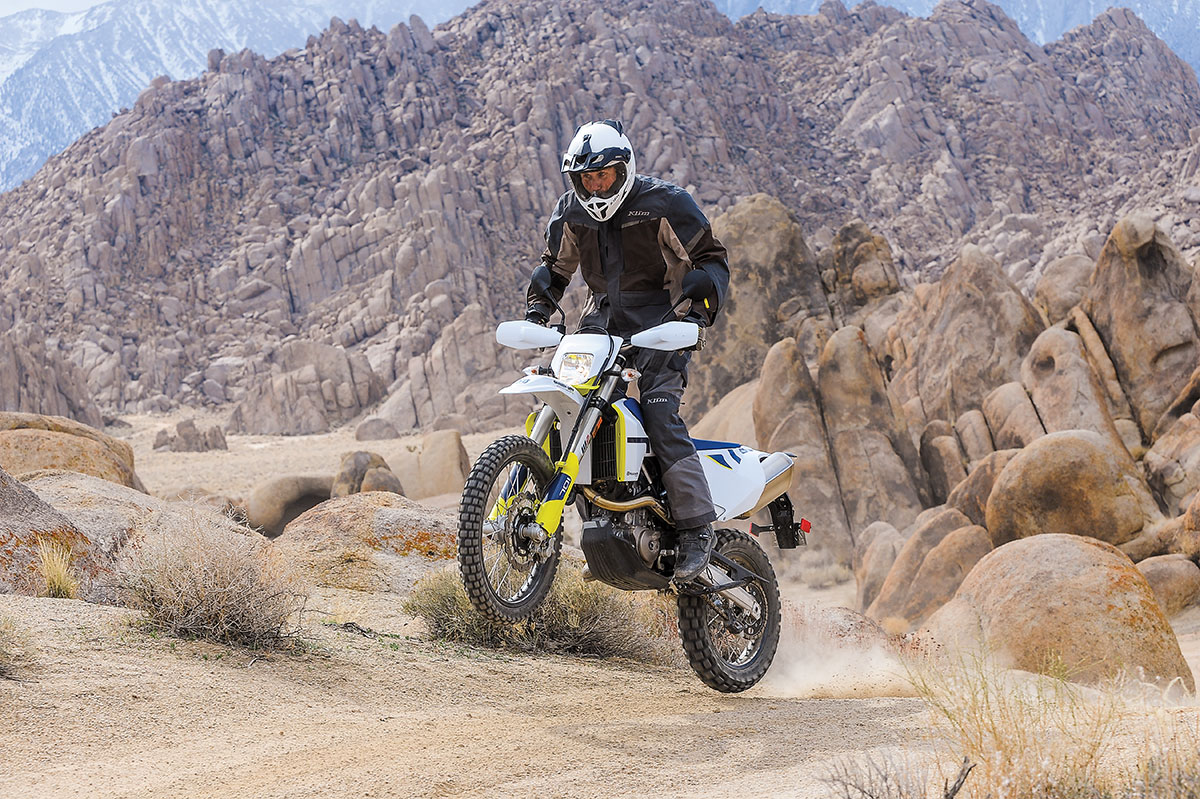 I prefer large-displacement singles mainly because the weight is manageable for my tendencies to go exploring off-road. One bike I’ve always thought about was the KTM 690 Enduro R, but never managed to plunk down the wad of greenbacks to own one. Doing an internet search led me to my local KTM/Husqvarna dealer—Carson City Motorsports in Carson City, Nevada. Not a single KTM 690 could be found, but they had a white clone sitting there. It offered me a big single cylinder, fuel-injected motor, and premium suspension with a chassis that’s a good compromise between dirt and street.

INSIDE THE 701
The 701 Enduro is a single-overhead camshaft making about 74 horsepower. For 2020 Husqvarna introduced a bevy of new electronic rider aids. One of the first things you’ll notice is the ride-by-wire throttle. This one change made it possible to add a host of ride features, like on-road/off-road power settings, on/off traction control, on/off ABS (there’s a dongle available that offers a third setting, which is “off” on the rear and “on” for the front), and a lean angle sensor that helps control rear-wheel slip in a corner on the pavement, as well as prevent wheelies. 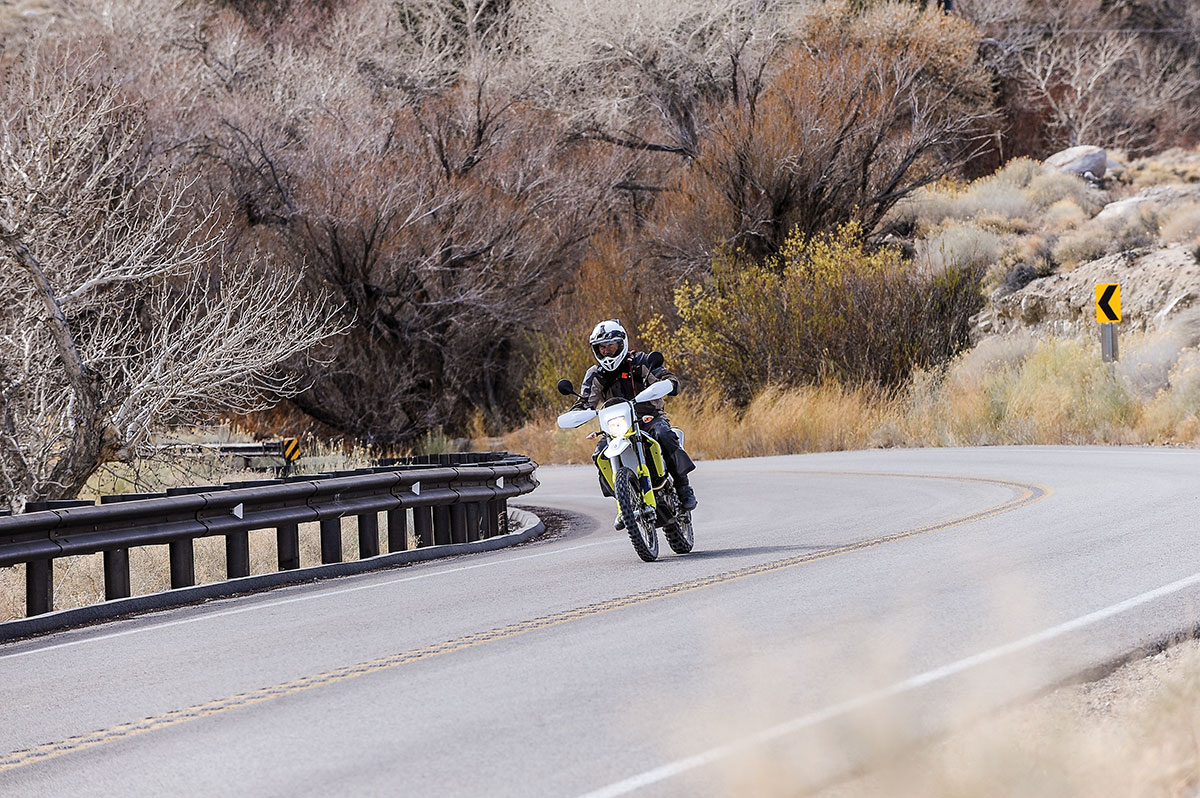 They’ve added a slipper clutch that reduces rear-wheel chatter when downshifting and an Easy Shift function. This allows clutch-less shifts once the motorcycle is moving by matching engine rpm to the speed of the selected gear. The 701’s system isn’t quite as polished as those on several brands of street bikes. If you don’t commit with a firm/positive upshift, there’s a hesitation before clicking into the next gear. Downshifting didn’t have this problem, and it’s fun to listen to the computer blip the throttle.

In addition to the electronics package is WP’s front and rear Xplor suspension providing 9.8 inches of travel. Suspension is a big issue for me, as I tend to look for very remote areas to explore, and roads are just a suggestion. The fork is an open-cartridge design with dedicated damping circuits for each leg. Compression is in the left fork and rebound damping on the right side. The shock is a WP Xplor damper that connects to a linkage system. It, too, offers just under 9 inches of travel, is adjustable damping-wise and caters to an off-road-biased ride.

The trellis frame is made of chromium-molybdenum steel and has focused torsional rigidity and longitudinal flex for strong handling traits that mate to good feel. The rear subframe integrates with a 3.4-gallon fuel tank positioned for good weight distribution. Produced in a thermoplastic rotational molding process, the single-piece unit is made of high-strength polyamide.

HIT THE ROAD JACK
Hitting the start button for the first time rewards you with a healthy exhaust note from the fairly large muffler. You’d never notice the throttle doesn’t have a cable other than it’s super smooth. With a seat height of 36 inches, it’s a long stretch to the ground. Between the wide front portion and trellis frame, your legs are pushed to the outside edges of the footpegs when standing, although this isn’t nearly as bad as some of the other bikes I’ve owned. I ended up rotating the handlebar clamps to the forward position to open up the cockpit. This made a huge improvement when standing. The bike is incredibly stable at speed while still handling well on tighter singletrack. In the rear I went out 2 clicks on low speed and 1/4 turn out on high speed to balance things off-road. With the forks, I found that going out 2 clicks makes frost heaves and expansion joints on the highway a lot less jarring, while going in 2 clicks works well off-road.

The ABS, slipper clutch and traction control all work quite effectively when you get a little over-exuberant on the highway. There’s a very noticeable difference between the two ride modes. Mode 1 has a snappy throttle with a greater amount of lean-angle traction control. Mode 2 offers a smoother throttle with greatly reduced traction control. For off-road work, traction control is better turned off, especially climbing any type of hill. If left on, it cuts power and prevents the rear tire from spinning, which is crucial for deep or heavy climbs.

When I tested the traction control settings, I could only get halfway up a long, sandy hill-climb when in off-road mode. Once I disabled the TC, I could easily get over it, and at speed. ABS is another feature that should be turned off when you’re in the dirt. Leaving it on will have you doing a Fred Flintstone foot-drag in trying to slow it down.

With the stock gearing, first gear seems to be a little on the high side when you initially take off. Still, the motor has more than enough torque to easily pull it. If the majority of your time is spent at lower speeds in the dirt, plan on adding one or two teeth in the rear. This will tighten up the wide feel to the gearbox, making for less clutch action down low and enhanced ability to find traction.

For the highway, sixth gear will easily cruise at highway speeds in the 70-mph range with a slight vibration through the bars. I found that the motor actually got smoother at 80 mph! There’s enough power on tap to go into the triple-digit range (on a dry lakebed, of course). A thumbs up to the Easy Shift feature while riding off-road; it means one less thing to worry about when you need a quick gear change.

The brakes on both wheels are from Brembo and use Bosch technology for the ABS. The front uses a twin-piston floating caliper clamping down on a large 300mm wave rotor, while the rear uses a 240mm rotor with a single piston. The brakes are more than up to the task of slowing down the heft of the bike. They offer serious feel, good strength and the ABS works nicely on the road. Turned off for off-road, they are strong, progressive and have good feel. Black D.I.D aluminum rims are wrapped with a set of Continental TKC80s. Having a 21-/18-inch wheel combo opens up a lot of options for tire choices. The Contis are a good 50/50 tire that work great for the intended purpose of the bike, although they wear fast. Most riders are replacing the rear in the 2,000–3,000-mile range. The handlebars look to have a fairly high bend when compared to a moto bike, although they are comfortable both sitting and standing.

There’s no such thing as the “perfect” motorcycle, and the 701 has its foibles. The Dirt Bike guys were split on the grips, and I’m not a fan of them because my size-XL gloves find them too small and hard. Another area that bugs me is the width of the perimeter frame/seat at the front of the bike. I like to squeeze the frame rails around the footpeg pivot when standing, and this mid-girth has my boot resting farther out than I prefer. For some reason Husqvarna chose to put an LED tail/brake light on the bike but not the turn indicators. They are available as an OEM accessory. Standing up when riding off-road has my forearms hitting and moving the mirrors. They will be replaced by a set of Doubletake foldable mirrors. The long and wide seat would lead you to believe it’ll be pretty comfortable, but the foam is too hard. Some believe the seat height is towering, but guys over 6 feet think it’s fine. There’ no love for the gas fill. It’s small, located oddly (behind the saddle) and is a pain to fill.

IN CONCLUSION…
I plan on making the 701 Enduro my do-it-all exploration bike. Having a bike that can easily handle lengthy highway stretches while linking together the off-road trials I crave is crucial. I’ll add pannier racks, a rear rack, strap on my Wolfman soft saddle bags and a Rotopax fuel can to extend my range to 200 miles. A set of Fasst Co. Flexx bars and adventure pegs will be my first upgrades to fine-tune the Husky. I don’t have a problem riding without a fairing, especially off-road. Earplugs and a quality ADV helmet work for me.

My adventure treks primarily focus on the dirt, and the 701 Enduro gives me the off-road prowess I’ve been craving while not punishing me when I hit the highway. Overall, I can find little to snivel about and yards to cheer for. This wagon hauls the mail, and while switching modes isn’t quick, you can take it from it managing you to a full Trophy Truck when everything is clicked off. The 701 Enduro makes me smile every time I hop aboard, and that can’t be a bad thing.