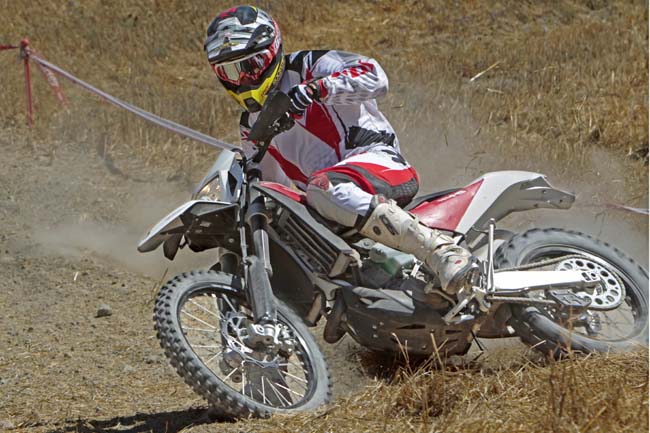 Husqvarna launched its 2011 model line this week in Italy and the event was full of  surprises. The new models were certainly a surprise with virtually everything in the company’s line redesigned. But the biggest shock of all came at the factory during the preparation for the international press conference. A fleet of new demo bikes was stolen, virtually in its entirety. Husky employees opened the factory doors to discover that 22 brand new motorcycles were missing. They haven’t been found yet.
The company made an amazing recovery and put together enough bikes for the press to ride on schedule. But things didn’t necessarily get better after the event started; company president Rhainer Thoma broke his leg badly while riding with the journalists. He was flown to Germany for immediate surgery.
But there was good news: the bikes. This year the 450 is completely new, and will come in three models; a motocrosser (TC449), a cross country (TXC449) and a dual-sport (TE449). Additionally there will be a 511cc version of the dual sport and the cross country, and there’s also a new 310 based on the new 250 motor that Husky introduced last year. That makes it a complete makeover for Husqvarna in the three years since being acquired by BMW. Every single model has been redesigned from the ground up. BMW’s influence is more evident than ever in the new 450. It has a BMW motor. Actually, it’s more accurate to say that the Husky and BMW G450X motors evolved from a common ancestor because the two powerplants are very, very different. In broad description, the new Husky is an electric start, fuel-injected DOHC single with the clutch mounted on the crankshaft and the countershaft sprocket located on the swingarm pivot axis, just like the BMW. But the Husky motor has moved in its own direction, using some of the data that BMW acquired in its WEC racing effort and some of Husqvarna’s own, distinctly Italian influence. The result is a bike that is nothing, absolutely nothing, like the BMW.
The chassis in particular doesn’t look like anything else. It has a full-cradle steel frame, shock linkage, KYB suspension and massive gusseting around the two swingarm pivots, which are outboard of the countershaft. Former World Enduro Champion Juha Salminen had no small influence on the final product, as did Former MX World Champion Andrea Bartolini. Both of them agreed that the countershaft location was an asset if done properly and decided to retain the design, even after testing prototypes with more conventional systems. The arrangement is now called CTS for  Coaxial Traction System. Although the details are not finalized, Salminen is expected to race the World Enduro Championship on the TE449 in 2011.
After riding the new bikes for a day, we can certify that they are 100 percent Husqvarna. The BMW part of the mix is almost invisible. On both the TE449 and the TC449, the KYB suspension works well and chassis movement is minimal. And Husqvarna found a lot more power. We rode the TE in its power-up configuration, which means the throttle stop was removed, the ignition was remapped and the DOT muffler was replaced with an Akrapovic competition system (the plan is that buyers will receive the extra muffler with the bike.) In that form the bike was strong enough to compete with the likes of a KTM 450EXC. The Husky motor revs more slowly, but power itself is excellent. The EFI system works seamlessly, with none of the on/off jerkiness that fuel injection often brings. The Husky’s clutch is similar to the BMW’s in design, but has hydraulic actuation and a much better feel. The only trait the two have in common is that the clutch cover sticks out slightly too far, which initially makes it  difficult to find the rear brake lever.
As for the TC449 motocross bike, it’s surprisingly well finished and capable. If you’ve ridden the 2010 TC450, you’ll find the new bike strangely familiar. Despite having every single part redesigned, the Husky still feels like a Husky. It gets excellent traction and it turns well. On the negative side, it feels large and perhaps overweight, and the power is smooth to the point of being tame. Husqvarna gave the bike two power curves that can be switched with a push of the button (but not on the fly), but even the aggressive one gives the bike a hint of that slow-revving, old-world Husky feel.
For more info on the new Huskys, check out the October issue of Dirt Bike. The new bikes will be available at dealerships within two months.

The international press corps got to ride the new Huskys at the Cavaletti circuit in Italy.

The six-speed TE449 comes with a competition kit that includes a race pipe.

Juha Salminen will race for Husqvarna in 2011.
Share FacebookTwitterGoogle+ReddItWhatsAppPinterestEmail