HUSKY VS. BETA 2-STROKES: THE WRAP 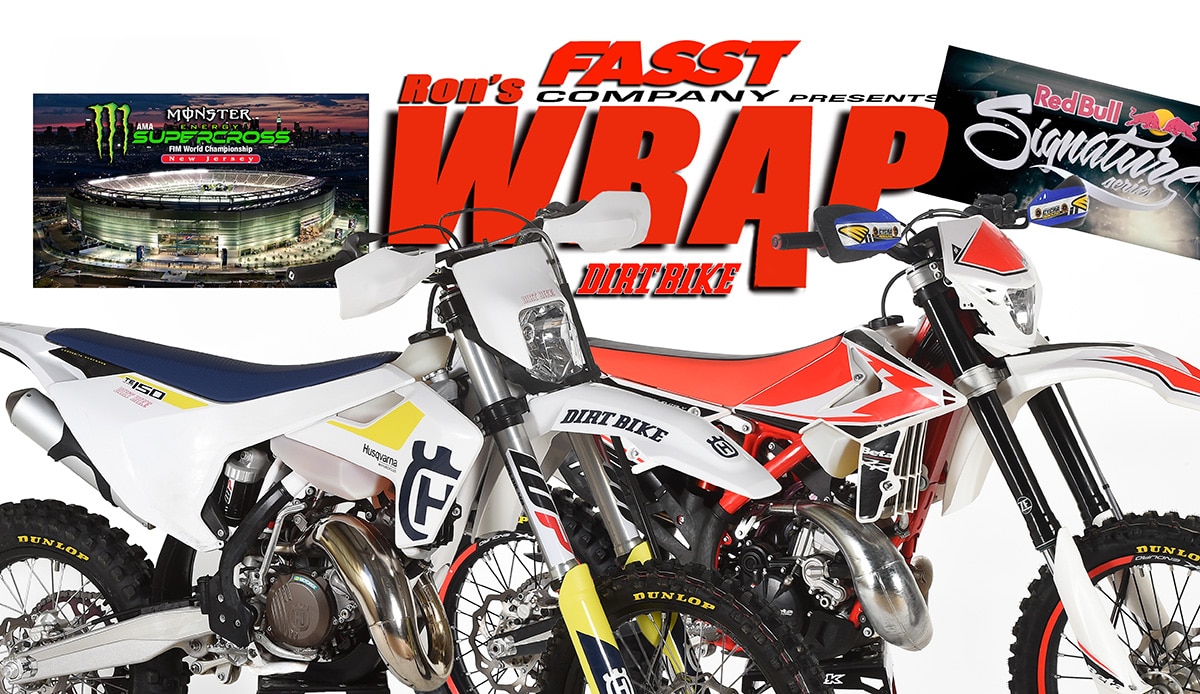 Any week that allows you to ride small-displacement two-stroke off-road bikes is a good week. We’re in the middle of a one-on-one comparison between the Husqvarna TE150 and the new Beta 200RR. Love these bikes! A few years ago, the KTM 200 was discontinued, ending the era of 200s. It was clear that KTM and Husqvarna were offering the 150s as a replacement. Now that Beta has a 200, it seemed like a natural comparison. It would have been great to make it a full shootout including the KTM 150XC-W and the GasGas EC200, but couldn’t get them all in one place at one time. For now, riding the Husky and the Beta will tell us what we need to know. 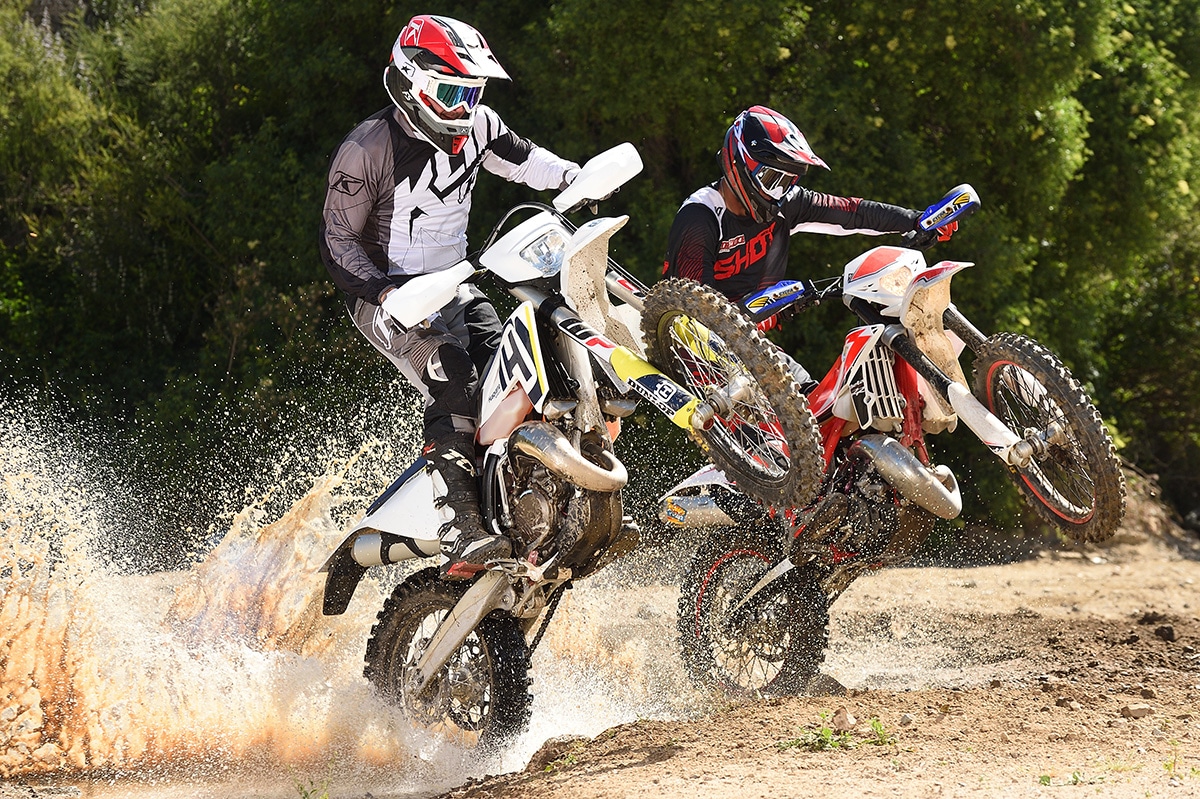 On paper, they are very similar: small two-stroke off-road bikes with six-speed gearboxes, hydraulic clutches, electric start and so on. But man, are they different. First off, neither one is very much like an old-school 200. They’re both better. At the risk of impugning fond memories, the last of the 200 two-strokes didn’t rev at all. It made marginal low-end power, revved slowly and died off early. 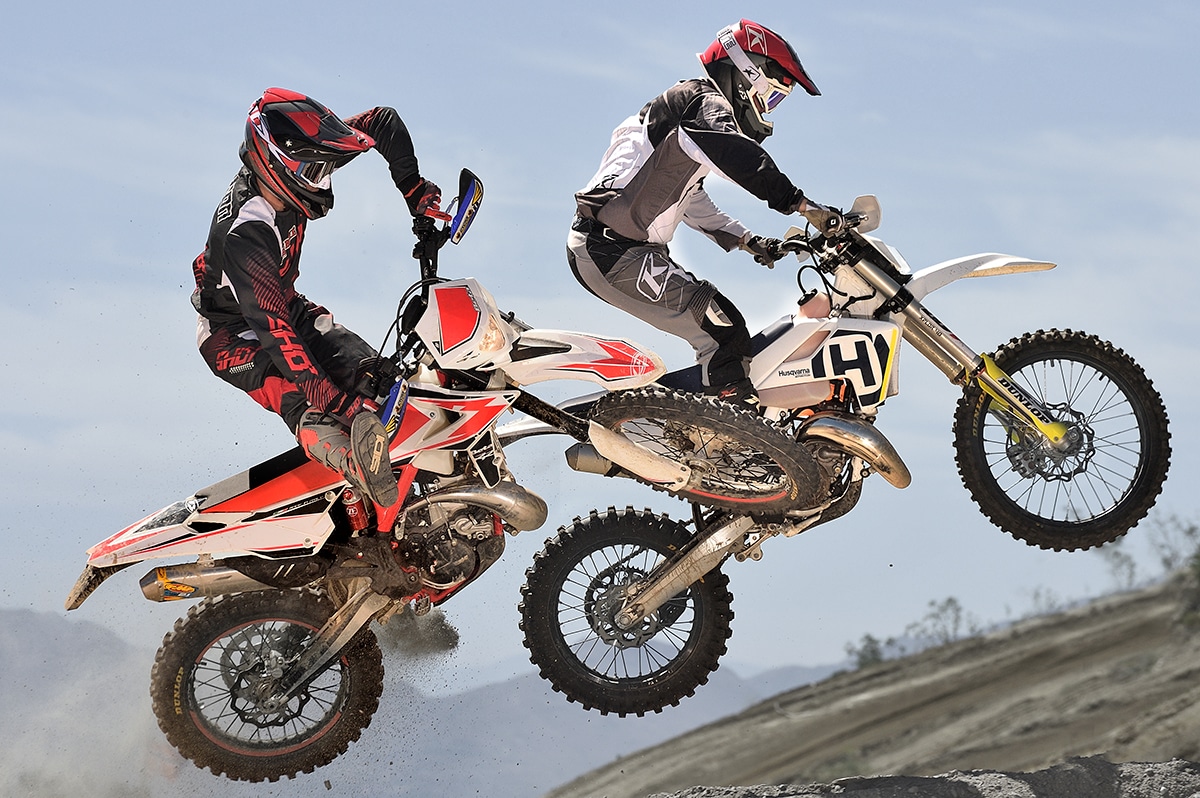 The Husky 150 isn’t very impressive down low, but it survives that by revving quickly and getting into the meat of its powerband immediately. Then it really takes off. The little Husky is surprisingly powerful, and when you couple that with an overall package this light (206 pounds without fuel), it makes for a very lively, responsive bike. It isn’t just about power-to-weight ratio, either. As we’ve pointed out many times before, a smaller motor has much less spinning mass and that makes it easier to throw around.

There’s no question that the Beta has a bigger motor. It feels much more throaty down low, and might even be confused with a 250. You can actually linger in the low-rev zone just above idle without immediately transitioning to higher revs. The Beta is a little mellower and less demanding of instant action. But like the Husky, it has quick throttle response when you want it. Also like the Husky, the revvy, responsive motor gives it a feeling of maneuverability. On the scale, it weighs 211 without fuel. The Beta signs off much earlier than the Husky. Right about where the Husky is reaching its peak, the Beta is already done. The Husqvarna has a more impressive peak, but the zone where it’s making more power than the Beta is actually quite brief.

They both have excellent details and parts. Here’s how some of the components compare.
Brakes: Both bikes stop incredibly well, but the Beta’s Nissins are more powerful than the Maguras on the Husky.
Clutch: Both have super easy clutch pulls, but the Beta’s can occasionally act up. It squawks and gets grabby when it gets hot, whereas the Husky’s is always the same.
Handguards: The Husky has them, the Beta doesn’t. We added a set of Cycra Rebound handguards to our test bike.
Noise: The Husky is considerably louder than the Beta. Neither has a spark arrester. The FMF you see pictured on the Beta here, once again, isn’t stock.
Tires: The Husqvarna comes with Dunlop Geomax AT81 tires. The Beta has Michelin Enduros with short Euro-spec knobs. The Michelins work well on hardpack soil and are a secret favorite among extreme riders. For most of our testing in the loose soil of  Southern California, the AT81s work better, so when it came time to replace the tires, we put a set on both bikes.
Bonus round: We love the oil injection system on the Beta.
Price: The Husky sells for $8499. The Beta is $8399.  We’re still testing, so look for the full story in the July, 2019 print edition of Dirt Bike. 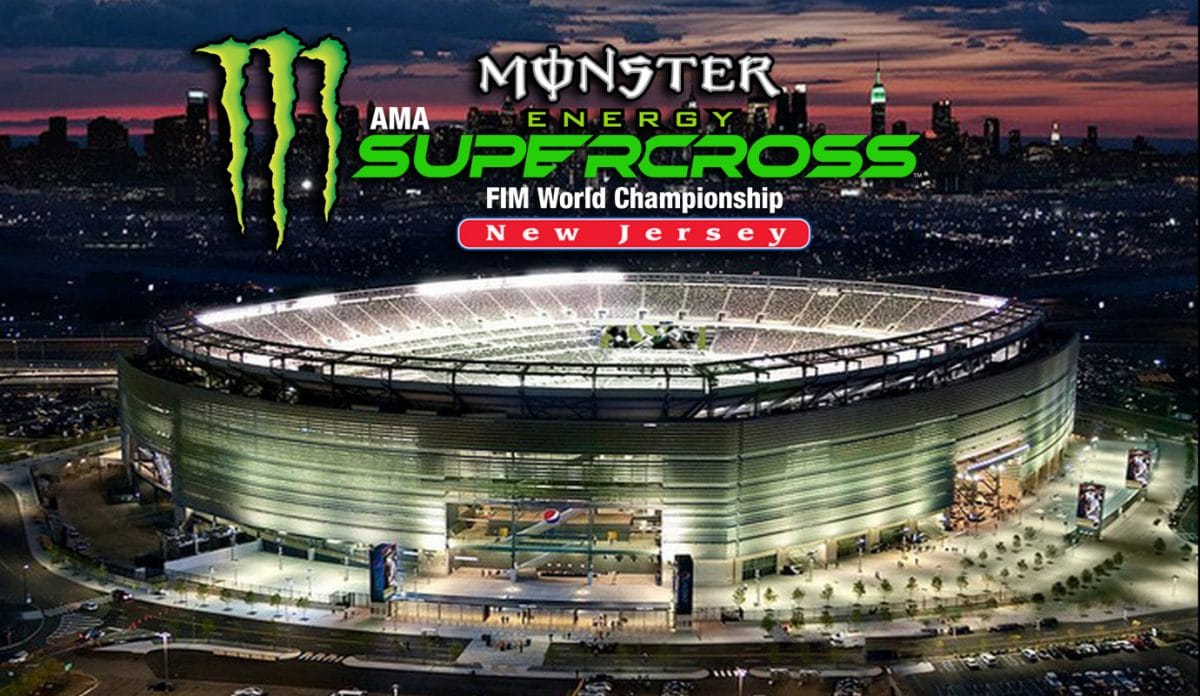 The Supercross series resumes this week in Metlife Stadium, East Rutherford, New Jersey. The fun fact about this location is what happened last time Supercross was there. It was in 2017 when Eli Tomac was locked in a points battle with Ryan Dungey. In that race, Marvin Musquin was leading on the last lap, when he pulled over and let Dungey by. Tomac wasn’t happy. It gave Dungey three more points in the championship chase and there was only one round left. In the end, Dungey won by five points. Dirtbikemagazine.com will be reporting results from Metlife Stadium live on Saturday. Click on the image above for extended Supercross coverage this weekend. 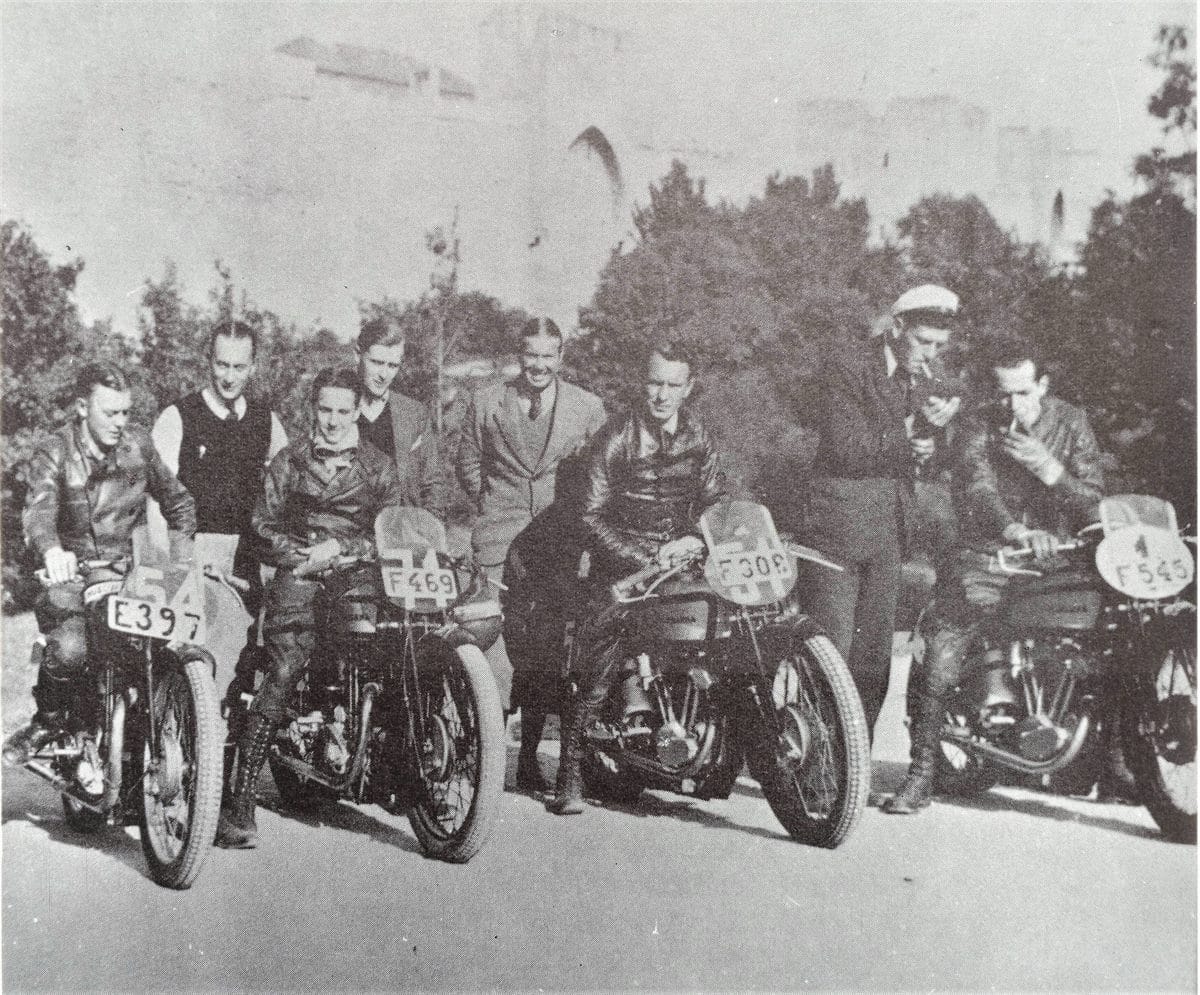 When KTM acquired Husqvarna, they sent Kenneth Olausson into the company archives to dig out material that no one had looked at for years. Every few weeks he comes up with a gem. It can’t be an easy job. This week, the subject is the 1934 Gotland TT, which was kind of like the Virginia City GP of the day. Technically, it was supposed to be all pavement, but back then there was very little difference between dirt and street, and the biggest problem the riders faced was dust. Click on the image above to read about it.

I scanned a random 14-year old column for old-times sake. This appeared in the November, 2005 issue of Dirt Bike. 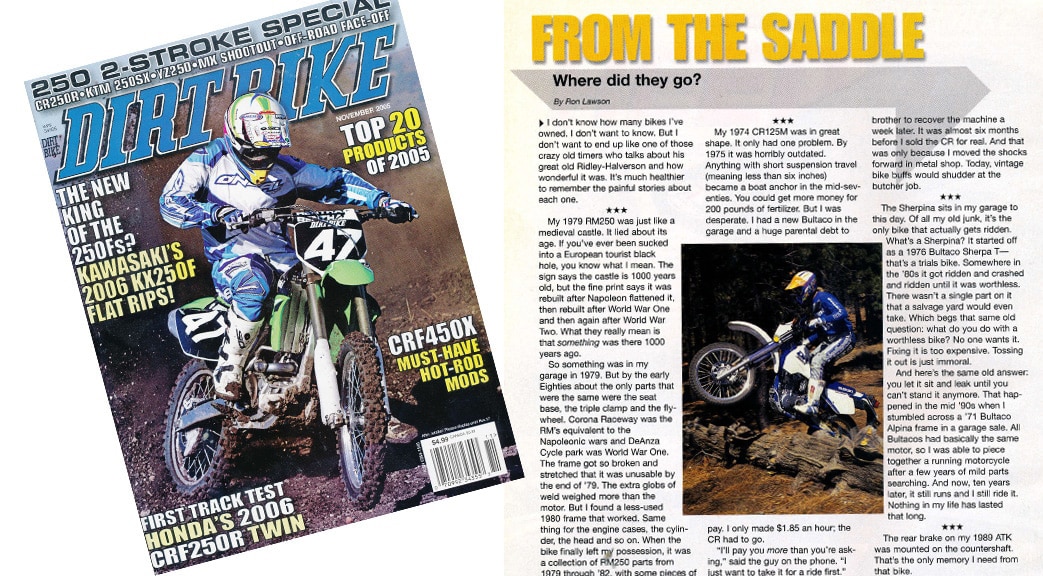 ► I don’t know how many bikes I’ve owned. I don’t want to know. But I don’t want to end up like one of those crazy old timers who talks about his great old Ridley-Halverson and how wonderful it was. It’s much healthier
to remember the painful stories about each one.
♦    My 1979 RM250 was just like a medieval castle. It lied about its age. If you’ve ever been sucked into a European tourist black hole, you know what I mean. The sign says the castle is 1000 years old, but the fine print says it was rebuilt after Napoleon flattened it, then rebuilt after World War One and then again after World War Two. What they really mean is that something was there 1000 years ago.
So something was in my garage in 1979. But by the early Eighties about the only parts that were the same were the seat base, the triple clamp and the fly­wheel. Corona Raceway was the RM’s equivalent to the Napoleonic wars and DeAnza Cycle park was World War One. The frame got so broken and stretched that it was unusable by the end of ’79. The extra globs of weld weighed more than the motor. But I found a less-used 1980 frame that worked. Same
thing for the engine cases, the cylin­der, the head and so on. When the bike finally left my possession, it was a collection of RM250 parts from1979 through ’82, with some pieces of RM400 and a little bit of YZ250.
Years later I got a call from the San Bernardino County Sheriff’s depart­ment. “We have a man in custody here who claims to have purchased a motorcycle from you,” they said. “He was picked up for trespassing and evading. He produced a pink slip with your name on it, but the frame num­bers don’t match. So, do you know this man?”
“Never heard of him.”
♦     My 1974 CR125M was in great shape. It only had one problem. By 1975 it was horribly outdated. Anything with short suspension travel (meaning less than six inches) became a boat anchor in the mid-sev­enties. You could get more money for 200 pounds of fertilizer. But I was desperate. I had a new Bultaco in the garage and huge parental debt to pay. I only made $1.85 an hour; the CR had to go.
“I’ll pay you more than you’re asking,” said the guy on the phone. “I just want to take it for a ride first.”
“I’m going to the racetrack Sunday,” I said. “You can ride it there.”
“Sounds great,” he said. “Let me pick it up on Friday so I can get it set up, and I’ll meet you a the track.”
“Uh, uh, well … okay.”
What can I say? I was only 15 years old. And I think I was a pretty stupid15. Of course, the guy never showed up at the track. It took the police and some detective work from my big brother to recover the machine a week later. It was almost six months before I sold the CR for real. And that was only because I moved the shocks forward in metal shop. Today, vintage bike buffs would shudder at the butcher job.
♦     The Sherpina sits in my garage to this day. Of all my old junk, it’s the only bike that actually gets ridden.
What’s a Sherpina? It started off as a 1976 Bultaco Sherpa T. That ‘s a trials bike. Somewhere in the ’80s it got ridden and crashed and ridden until it was worthless. There wasn’t a single part on it that a salvage yard would even take. Which begs that same old question: what do you do with a worthless bike? No one wants it. Fixing it is too expensive. Tossing it out is just immoral.
And here’s the same old answer: you let it sit and leak until you can’t stand it anymore. That hap­pened in the mid ’90s when I stumbled across a ’71 Bultaco Alpina frame in a garage sale. All Bultacos had basically the same motor, so I was able to piece together a running motorcycle after a few years of mild parts searching. And now, ten years later, it still runs and I still ride it.
Nothing in my life has lasted that long.
♦    The rear brake on my 1989 ATK was mounted on the countershaft. That’s the only memory I need from that bike.
To tell the truth, my later bikes don’t generate as many memories as the early bikes. There are too many test bikes around that need testing. Thus, I barely recall the DRZ, the Honda 450 and so on. In fact, I get a little con­fused about which bikes I owned and which ones I just rode. But that’s okay. In general, I’m assuming that my favorite bikes will end up being the ones I have yet to ride.